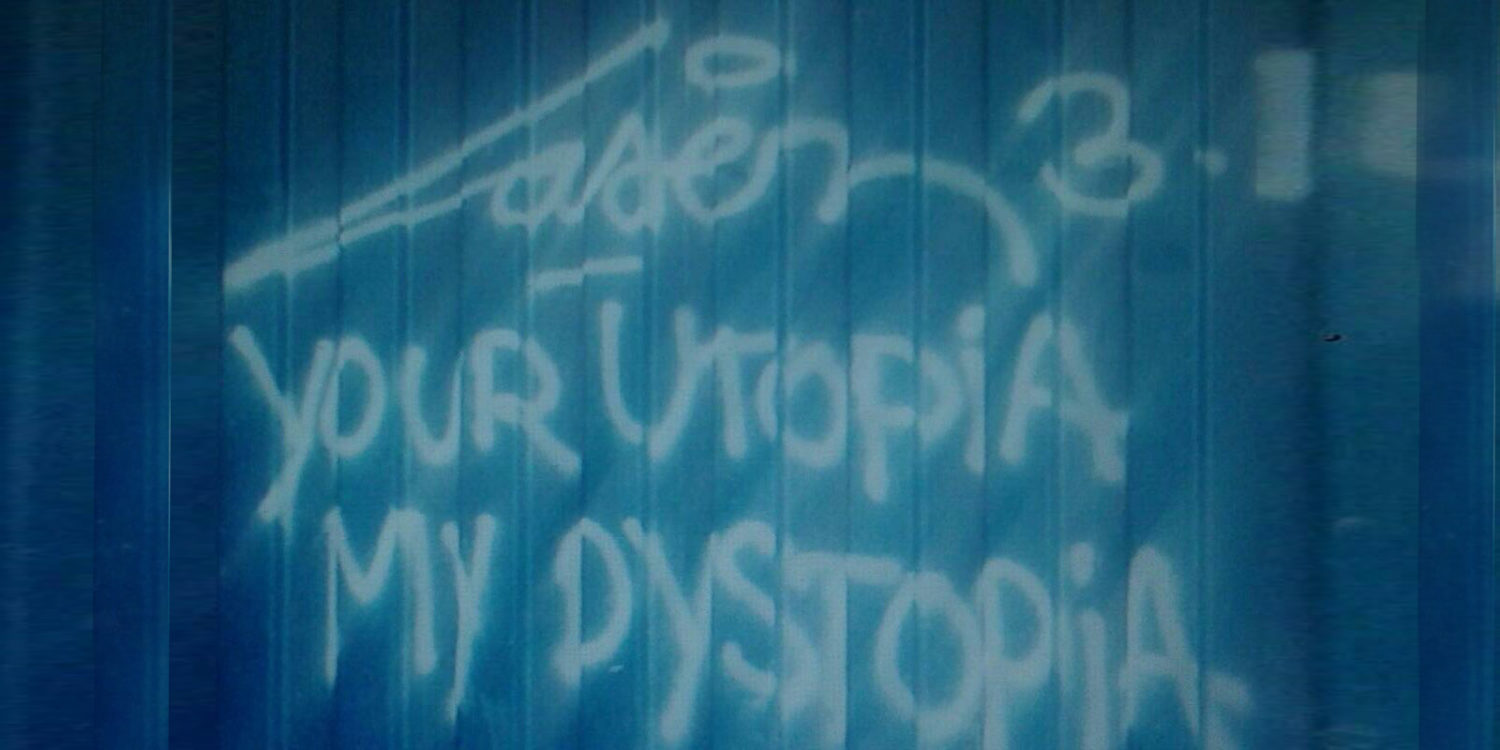 With current trends intensifying, the picture looks quite bleak.

It’s early morning. You are in your fancy apartment in a high-rise in some non-descript inner city area. When you enter the study, your Quantified Self Tracking Service holographically projects an array of personal infographics. It quickly suggests a health center visit and schedules a ride in a mobility capsule. The capsule hovers quietly through a smooth urban landscape, until it gets stuck. Immediately, your system suggests a considerably more expensive, direct flight to the health center. The system chooses for you and before you are able to answer you are launched out of the traffic and into the skies. Upon arrival in the health center, also situated in an unremarkable skyscraper, your health data appears on large, projected information panels, alongside the data of your grandmother. Before you have managed to get a grip on the situation, the system has already made some major decisions for you…

Virtually real
This dystopian urban imaginary is projected in a VR-installation just before the entrance of this year’s International Architecture Biennale Rotterdam (IABR). It offers an immersive but unsettling glimpse of how the future urban experience might look like for some, with smooth, frictionless landscapes, smart technologies in control and elite access to differentiated services. As IABR-director George Brugmans in this year’s catalogue warns, whether a city will look like this or not, it will invariably be a part of a very unequal ‘winner-takes-all’ societies, which ‘thrive on debt and cheap money and the quick and massive burning of fossil fuels’. It’s in this kind of society that half of our cities will still have to be built. In response, the IABR-2016 features ‘alternative urban configurations’, as chief curator Maarten Hajer calls them, in its exhibition and programme. We wonder however – what if these ‘alternative urban configurations’ don’t materialize? What if the dystopian imagination in the opening installation becomes reality? Let’s imagine what that city would look like.

Real control
Hajer writes that ‘real estate has given rise to an ever more speculative economy, especially during the last couple of decades. Instead of social need, it focused on the opportunity to make money on offices, shopping malls and housing for the upper class’. It did indeed, and cities of the future will see an even more powerful real estate sector and the increasing influence of the corporate sector on the production of space in general. This also means that decisions made democratically will gradually be replaced by decisions taken in corporate board rooms. Likewise urban interventions with a social or cultural dimension will increasingly be replaced by projects that produce the highest possible financial return.

Extra extraction
Money made in the real estate sector, but also elsewhere in the city, will quickly leave and end up in the hands of a few, and most likely in some tax havens as well. The urban economy will rapidly become an ‘extractive economy’, as Hajer calls them. Cities will increasingly open themselves up for extraction, competing for global flows of money through city-marketing campaigns aimed at foreign investors and visitors. This will result in a race to the bottom, and erode social and cultural capital at the local level. A crucial development allowing this extractive economy to expand is the continuing flexibilisation of the housing market. State-owned or rent-controlled housing is being rapidly sold off, providing investors with a host of new opportunities. The simultaneous elimination of housing rights allows for a quicker succession of rent hikes and will further consolidate the position of large real estate owners.

Super flex
The further advancement of extractive economies is established through the rapid erosion of labour regulations. Fast-vanishing fixed-term contracts, the rise of the freelance flex-worker and decreasing minimum wage rates all push people into precarious situations to the advantage of the corporate sector. This flexibilisation of labour will also give rise to the ‘on-demand economy’, which will create a severe polarisation between those who can afford to be served and the many modern-day servants that will cater for their needs. Beyond the obvious examples of Uber and Deliveroo, almost every activity can now be outsourced, from having someone folding your laundry to serving your home-delivered dinner. Members of this service precariat will – through connected services and devices – run around and do chores for many different masters throughout a week or even a day.

Private party
At the same time, the privatisation of public facilities, which took off in the 90s, will reach a whole new level. At the national scale, governments will transfer sectors such as healthcare, education, public transport and culture to the market and dismantle local community facilities. These services will only become available when and where profitable, creating considerable divides in terms of access and quality. A similar impact will be felt by the privatisation of public space, which will leave the corporate sector in control of large parts of the urban landscape, seriously harming the right to assemble and freedom of speech. The efficiency network once sold as the ‘smart city’ will furthermore allow for intensified corporate control over all kinds of personal data. When we have to start paying for the many digital services we currently use ‘only’ at the expense of our privacy, we will, as Tech critic Evgeny Morozov warns, ‘let Silicon Valley usher in a new form of feudalism that would make the unhinged privatisation of the last few decades look like socialism’.

Environmental elites
Increasing corporate control over cities will also result in the undermining of environmental regulations, on the urban scale, and, despite recent agreements signed at the climate summit in Paris, in growing levels of CO2-emissions on the global scale. Both developments have a significant impact on cities already, although the effects are not quite evenly distributed. On the urban scale, both surplus waste and polluting activities will as much as possible be shifted towards the poorer areas. Rising CO2-levels will fuel the rapid intensification of climate change on a global scale. While the emission of CO2 is due in large part to overconsumption by the world’s richest (mostly but not exclusively in the West), the effects of climate change will primarily be felt in less protected, vulnerable urban areas. Extreme weather, sudden floods and storms will mainly constitute a danger for the inhabitants of unprepared cities in the Global South. Ironically, it’s exactly in those places where climate refugees, fleeing drought in agricultural areas, will end up.

A scared, scattered world
These developments will result in fractured, unequal, unsustainable urban landscapes. We will witness the consolidation of isolated, green(washed), seemingly perfect enclaves for a global elite, which will be safe, sterile, strictly controlled and equipped with privatised, high-quality facilities. The historical cities of Western Europe are rapidly becoming such enclaves (i.e. suburbanised inner cities), although they also might resemble the smooth landscape featured in the opening installation of the IABR-2016. Gated communities are another manifestation of such enclaves, in particular in the Global South. Beyond these areas, surplus urbanity will proliferate. Large stretches of urbanised suburbia – from the banlieues of Europe to the favelas and the repetitive housing estates of Asia – will be home to the world’s majorities, and will also have to absorb growing migrant flows. While differing strongly from each other, they will in general have worse facilities (if they have any at all), they will be increasingly unplanned, more polluted and have a greater vulnerability to natural disasters. Inhabitants of these places are likely to work hard in multiple, precarious jobs to afford a place to live and will have considerably lower life expectancies.

These urban landscapes will be controlled through differentiated levels of militarisation and separated and fractured by borders with different regimes of access. The enclaves will be protected by both heavily fortified physical borders, operated by private contractors, and by virtual borders, which will introduce less transparent but equally exclusionary thresholds in cities. Automatic ID-checks for certain groups or automatic payment upon entering a certain zone will be increasingly common. The rest of the urban landscape might be fragmented by both types of borders as well and will in particular be submitted to various forms of control and repression. Besides more traditional forms of policing, asymmetrical techniques such as low-flying drones, will be more common as well.

An architect’s dream?
This prospect of the next economy gone wrong sounds pretty bleak, doesn’t it? In fact it is nothing but a magnification of the societal, political and market trends that have already developed over the past years. While many may agree that this dystopian anti-horizon is something we have to guard ourselves against, it is a situation that is actively propagated by some, even in the architectural world. Patrik Schumacher of Zaha Hadid Architects recently argued in the latest edition of Volume, that our free market is not yet free enough. In the article he seems to confuse the city as a place for people to co-exist with being a vehicle for profit maximisation: ‘the idea of a competitive, market-based privatization (and commodification) of everything – from public spaces, streets and city management to policing, courts and systems of law – is not only intellectually stimulating but also, in fact, increasingly plausible’. In Schumacher’s nirvana of unhampered capitalism, architects would surely benefit, dressing up the constantly recalibrated cityscape with their glossy designs.

It seems like we are nearing the end of the city as the inclusive polis. The catalogue of this year’s IABR appears to convey similar feelings and asks: ‘Is it still possible to change the course of this mammoth tanker?’ It responds with a biennale featuring ‘alternative urban configurations’ as a possible way out, which we will closely examine in our upcoming pieces.

This is the second article written by Mark Minkjan and René Boer as critics-in-residence at this year’s International Architecture Biennale Rotterdam. More soon on Failed Architecture.

René Boer
René Boer (1986) works as a curator, critic and researcher in the fields of architecture, urbanism, heritage and art. He is part of the Amsterdam-based Non-fiction collective, managing editor at Failed Architecture and affiliated with various urban social movements. Over the last few years, he has curated various exhibitions, public programmes and research projects, and has written for among others Volume, Harvard Design Magazine and Studio.
Mark Minkjan
Mark Minkjan is an urban and architectural geographer. He is Editor-in-Chief at Failed Architecture and produces the Failed Architecture Podcast. He has written for publications including VICE, The Guardian and The Architectural Review. In 2016, Mark received a talent grant from the Dutch Creative Industries Fund to develop new forms of architecture criticism. He received the Geert Bekaert Award for architecture criticism in 2017 and curated the 2019 exhibition “The Right to Build: Self-build Between Dreams and Reality”. Mark currently teaches at Amsterdam's Academy of Architecture and Gerrit Rietveld Academy.
add comment