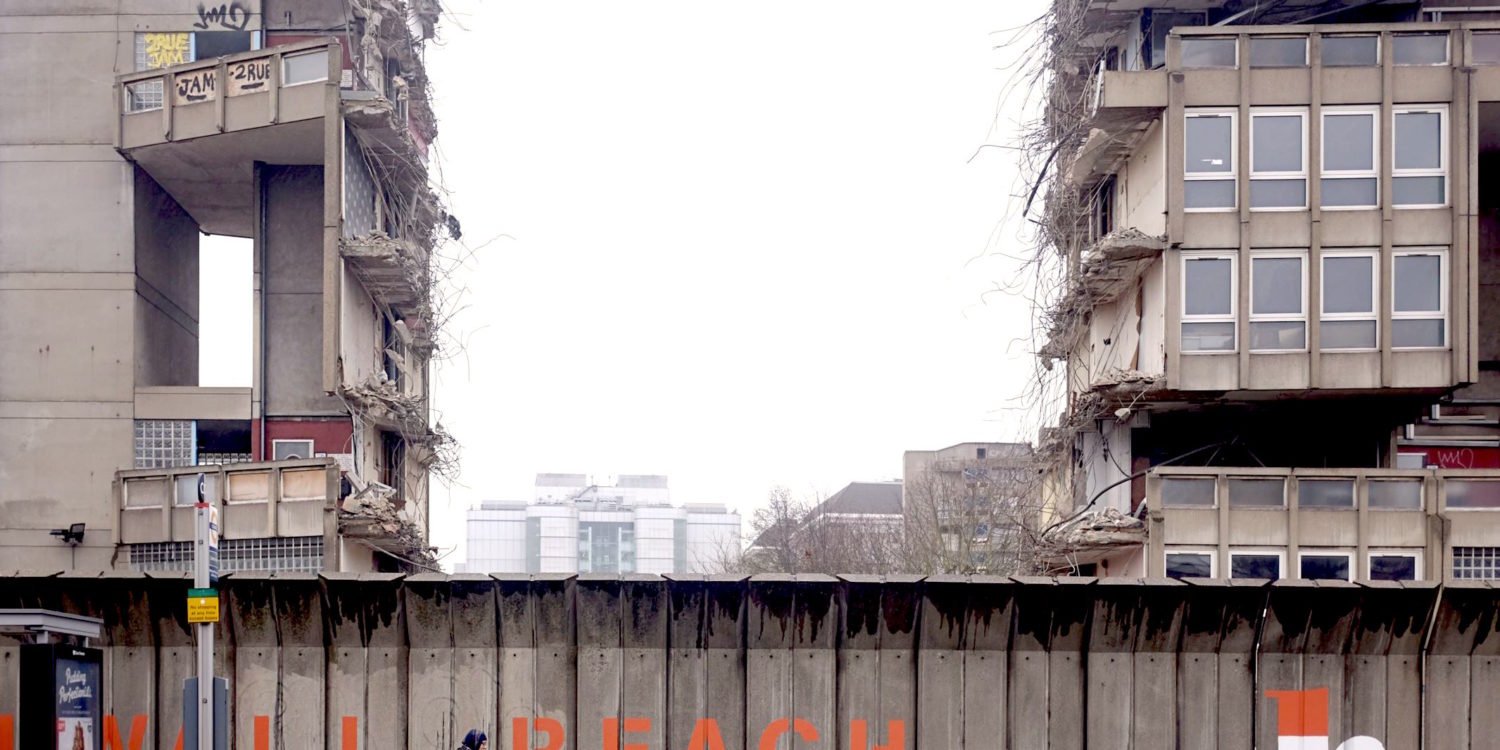 As London's landmarks are increasingly being turned into museum-pieces, spaces for the proper everyday enjoyment of urban life are becoming ever more scarce.

Contemporary London is becoming increasingly reliant on façade, image and relic to sell itself. From the classic Georgian buildings occupying much of the city’s core to the brutalist structures that capture a bygone era of mass social housing, this condition spreads like a disease, turning once vital, lived-in places into static objects whose cultural value is reduced to a collection historical markers.

In the past year, this phenomenon has been made most explicit with the museumification of Robin Hood Gardens (RHG) by the Victoria & Albert Museum (V&A). In November 2017, the museum announced it would be saving a segment of Alison and Peter Smithson’s Robin Hood Gardens housing estate in east London from demolition by acquiring it for their architecture collection. The acquired segment contains two maisonette flats spread over three storeys as well as its distinctive “streets in the sky”. According to Dr Christopher Turner from the museum, its presence in the museum’s collection will raise ‘important questions about the history and future of housing in Britain, and what we want from our cities.’

For much of its existence, Robin Hood Gardens was marred by controversy. As with much housing managed by local authorities (and later housing associations) across the city, poor maintenance led to serious questions raised around its suitability for residents. Despite a campaign to save it from demolition, with interventions from high profile supporters such as Zaha Hadid and Richard Rogers, the building’s fate was sealed in August 2017 and the structure started to come down in January 2018.

The impassioned arguments around the building’s fate before the bulldozers moved in means the V&A’s intervention to save a small segment has, unsurprisingly, drawn yet more controversy towards the contentious history of Robin Hood Gardens. In defence of its acquisition, Liza Fior of Muf architecture/art, who originally suggested the V&A preserve a section of the building at the end of her year-long residency at the museum, has argued that the segment as object may inspire vital debate around housing and building maintenance in the city. Others have criticised the museum’s lack of action during the campaign to save the building from demolition. As Crystal Bennes put it in an article for Frieze written before the segment was transported to Venice for the 2018 architecture biennale, the museum ‘considered the estate valuable enough to collect, but not valuable enough to help save from demolition in the first instance.’ Only now that the building, or at least their segment of it, has become a static object removed from its urban context and stripped of its use value as housing are they engaging with this debate.

There are troubling implications in a major museum choosing to value a cultural artefact only when it is isolated from both its surroundings and its socioeconomic context. As the late Mark Fisher put it in a 2007 essay, “Tradition counts for nothing when it is no longer contested and modified. A culture that is merely preserved is no culture at all.”

This tendency can also be found in the recent redevelopment plans for Smithfield Market. Although trading has taken place there since the 12th century, the market’s current structure was designed by Horace Jones in the 1860s . Architecturally innovative and experimental upon its opening, the market flourished under Jones’ iron phoenix columns and central concrete dome throughout the nineteenth and much of the twentieth century before changing consumer habits led to its economic and material decline.

In January 2016, it was announced the Museum of London would be moving into the general market at Smithfield. Not only will the repurposed structure, with a competition winning design by Stanton Williams and Asif Khan, house some of the six million objects in the museum’s collection, but the structure of the market itself will become a part of the curated whole. As reported by The Guardian, the museum’s new acquisitions will include ‘a row of derelict shops…a giant Edwardian gas burner, an entire street, and a working train line’ – all parts of the Smithfield complex.

Crucial here is the collapse of any distinction between the image of the city – that which we might expect to see within a museum – and the lived built environment – the structures that house our day-to-day lives. Just as the social use of Robin Hood Gardens changes as it moves from the Poplar to Venice, the structure of Smithfield Market will take on a new significance as it is repurposed as the Museum of London. The iron phoenix columns become historical props like the model shops in the former museum located at London Wall. 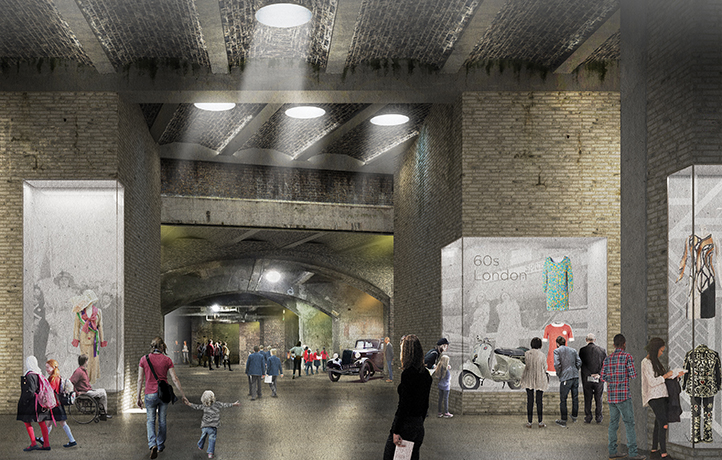 The importance of the image of heritage to contemporary London cannot be overstated here. Global competition between cities vying for investment, and particularly investment in the property market, means a “unique selling point” must be asserted through aspects of lifestyle, design and culture. The heritage of the built environment – those streets in the sky, iron phoenix columns, etc. – is crucial to the marketability of London and is a central point of distinction between it and other cities competing for globally mobile populations and, more importantly, the capital that circulates with (and often without) them. This, in combination with development policies oriented around what Richard Florida identifies as the “creative class” (i.e. not the former residents of Robin Hood Gardens) pursued in conjunction with the shift from industrial to post-industrial economic systems, means that heritage – and most crucially the image of heritage – in the built environment of the city is not simply the concern of historical enthusiasts and preservation organisations such as English Heritage, but also a crucial tool for city marketing.

We see this again, perhaps most crudely, in the transformation of Battersea Power Station, designed by Giles Gilbert Scott and completed in 1935. The station was decommissioned in the early 1980s. Yet its heritage status (first listed with Grade II status in 1980, updated to Grade II* in 2007) and highly lucrative location (on the south bank of the Thames) have facilitated its  conversion into vital sites in the townscape of post-industrial London. Recently described as ‘genuinely dystopian’ by Owen Hatherley in the Architects’ Journal, the conversion of Battersea into a new, mixed purpose neighbourhood including 839 homes and the new UK headquarters of global technology giant Apple is due to be complete over the course of the next decade. The link between heritage, global investment and contemporary London is explicit at Battersea. Take for instance the section on the history of Battersea Power Station from the development’s website:

‘Battersea Power Station is solid history. This giant at the river’s edge encapsulates an era: a time of grand vision and vigorous industry. Once, this might have made it simply a monument. Not now. Today the Power Station is back at the epicentre of the capital’s commercial and cultural life. Its future looks set to eclipse even its own majestic past. And you are invited to be a part of it.’

Again, the building as a historic relic is vital here, especially for its investors — ‘Malaysia’s most well respected successful property development and investment businesses’ —  as they attempt to guarantee investment returns as ‘solid’ as the history of the site itself. Indeed, the reliance of the development on the symbolic image of the former power station as an attractive selling point for the project somewhat undermines the assertion made above, that the development uses Scott’s architecture as anything other than a monument. The development at Battersea Power Station communicates notions of ‘grand vision’ and ‘vigorous industry’ through the image of one of the largest brick buildings in the world; a pure object in the museum whose symbolic value draws capital across the city and indeed the globe. 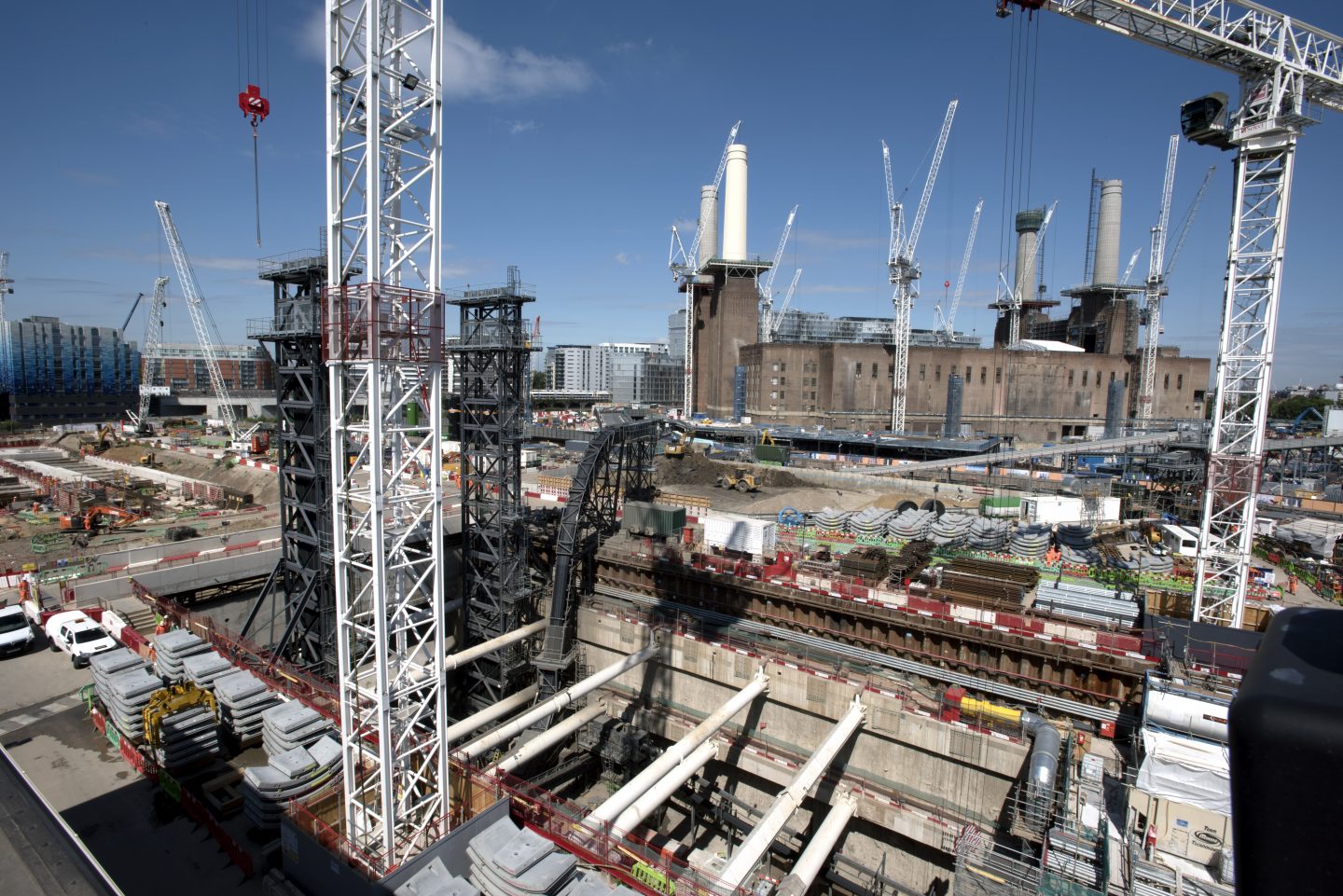 Another interesting strand that runs off the objectification of London’s built environment is the proliferation of viewing platforms. When the newest extension to the Tate Modern, originally another of Giles Gilbert Scott’s power stations which was converted into London’s modern art mecca in 2000, opened in June 2016 following a design by Herzog & de Meuron, the Switch House, as it is known, included a tenth-floor viewing platform. Art critic Adrian Searle described this as “art itself”, as though the image of London as viewed from above was the real star of the Tate’s expansive collection. More dramatically, completed skyscrapers such as The Shard and 22 Fenchurch Street (the so-called “Walkie-Talkie”) already attract visitors to overlook the city while 22 Bishopsgate and 1 Undershaft, two forthcoming towers, also have viewing galleries included in their planning documentation (they are competing to be the highest).

Thus it seems that if new developments are not co-opting the historic built environment of the city into their marketing material, then they are merely providing a platform from which to look at it as a disconnected observer. As artefacts in the museum, the objects of the city’s skyline are seen refracted through the display cases of multi-storied windows and observation-platform glass. Photography is instrumental as the tool for consuming the objectified city from the viewing platforms of the Switch House and the Shard, as witnessed in the gallery of images uploaded to Instagram that are geotagged to the Switch House.

Another sunny day to start the week 🌞 📷 @guillaume.tnl

London is pure object in these images and likewise in those taken from the other aforementioned viewing points. Like visitors to a museum, we wander the corridors atop the Switch House and observe the artefacts curated for our all-consuming gaze: a shard, a walkie-talkie, a gherkin, etc. Like Tower Bridge, the new Museum of London, Battersea Power Station and the Tate Modern, the skyline of the city is presented as a display – complete with its own exhibition gift shop.

These connections have been highlighted not to argue that Robin Hood Gardens should have been left untouched, that Smithfield should be demolished instead of becoming a museum, or that we shouldn’t have a chance to see the city from above. Rather, the aim here is to draw attention to a trend in the built environment that sees an objective gaze prioritised over subjective experience.

Crucially, the inverse symptom of this phenomenon is the rapid decline in spaces which facilitate that quotidian experience of urban life. The clearest example of this is the attack on and reduction of regular, genuinely affordable housing, in favour of off-plan, off-shore property investment. Yet beyond this we can see the declining availability of small-scale industrial spaces, threatened at the Old Kent Road regeneration, the loss of small business opportunities, such as at the recently condemned Elephant & Castle shopping centre, closing youth centres and nightlife under pressure from restrictive licensing laws. These are not iconic spaces and so their survival in contemporary London is precarious. And while the aesthetics of post-industrial or #brutal London have been celebrated in trendy circles over the past decade, this is not enough to ensure the survival of the social fabric that underlies them. Investors prefer glass and steel. Curators prefer commemoration. To quote Mark Fisher’s essay once again, “A culture which takes place only in museums is already exhausted. A culture of commemoration is a cemetery.”

George Kafka
George Kafka is a freelance writer and editor. He writes regularly on architecture and cities for Metropolis, Disegno, Frieze and others, and is a founding member of the &beyond editorial collective.

add comment
Lili
i think 'disconnection' is the key to a lot of what's happening in london right now, as buyers of luxury developments built on the rubble of 'edgy/vibrant' (=alive and lived in) housing certainly aren't encouraged to venture far beyond their secluded private balconies and gated pockets of 'communal' spaces
Related