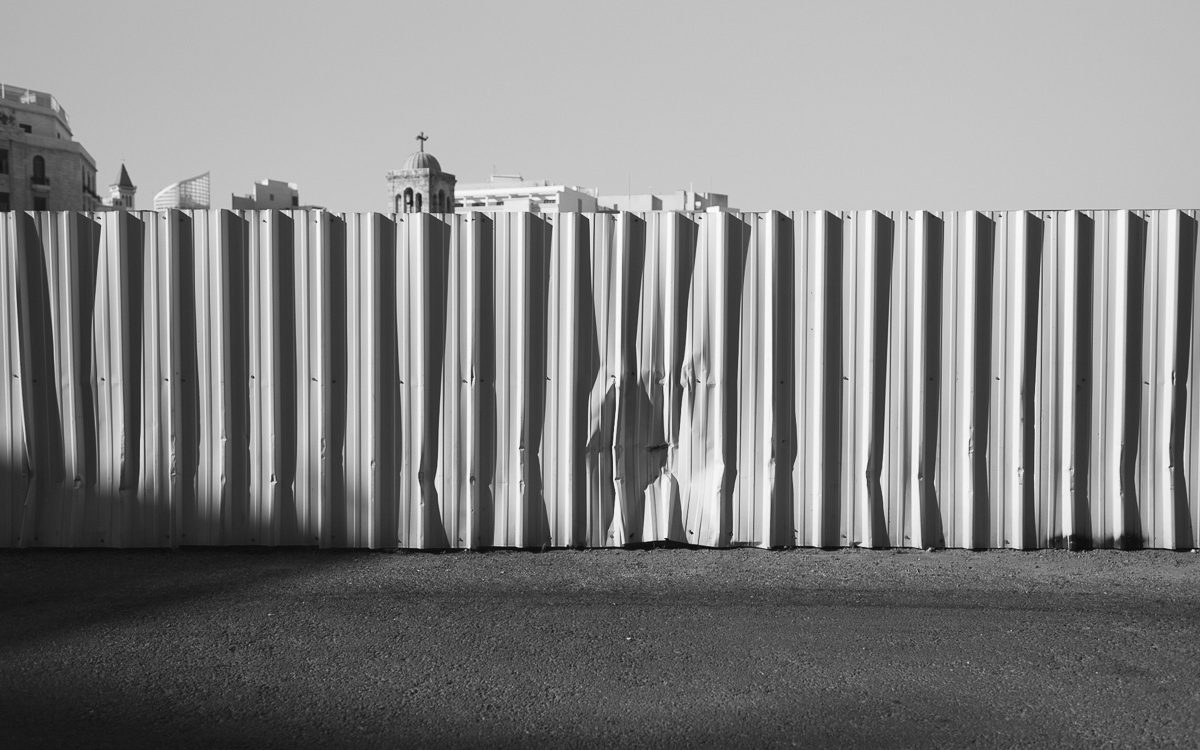 Novels set in Beirut preserve the memory of the pre-war city centre and depict possible scenarios of social participation in the sanitised urban reconstruction.

“Everything is new here. And it reminds you of its newness every day; its newness is a consistent effort, for the employees never stop wiping dust and polishing glass and oiling the metal of the escalators and hoisting up large billboards displaying provocative women dressed in lingerie or skintight pants.” – Hassan Daoud in As She Once Was.

When fifteen years of civil war came to an end in 1990, Beirut’s city centre appeared as a desolate and ruined landscape. Before the war, it had housed the souks, shops and banks, hotels and cabarets, publishers, coffee houses and a bus terminal with a busy taxi stand. It was a meeting place for Beirutis coming from various districts, sectarian affiliations and social classes. Despite widespread damage, the city centre’s reconstruction was prioritised. The heart of the nation’s capital represented a frontline between the divided East and West of the city. This intrinsic value of the city centre could hardly be underestimated. Nor could its previous role as a pluri-sectarian district of business and tourism. Decisions about demolition, renovation or conservation strategies, and competing visions about the planning and design of new construction became the focal points of heated debates. 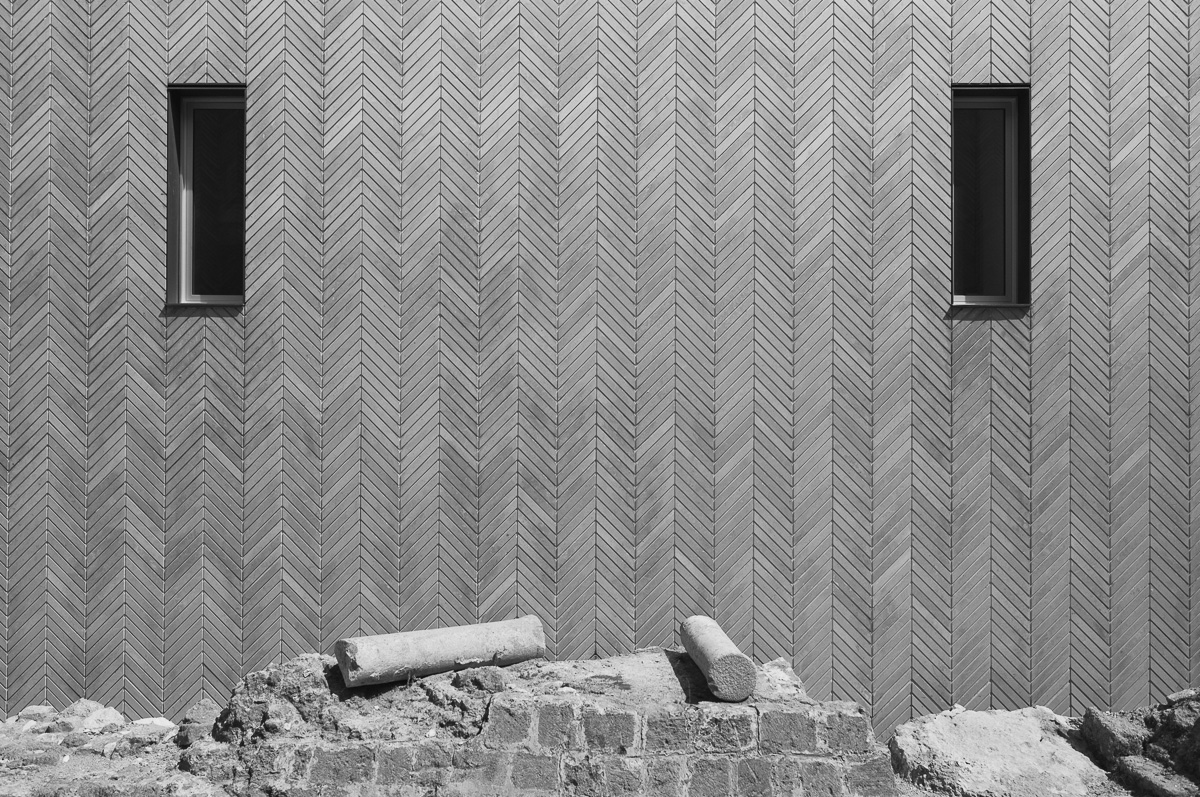 Since the governmental institutions required for the desired reconstruction project were understaffed and dysfunctional, a private company was used: the Lebanese Society for Development and Reconstruction of Beirut’s Central District (Solidere). From the outset, critics lamented the large-scale demolition of archaeological and architectural heritage that could have been restored. Some scorned the company’s rhetoric of global interurban competition aimed at attracting international business and tourism. They argued that Solidere selectively commodified the city’s cultural heritage and otherwise showed utter disregard for the local social fabric and issues of national commemoration and reconciliation. For these reasons, the redevelopment project was understood as part of a broader state-orchestrated attempt to silence memories of the civil war. Thus, while the architectural design of the city centre might be internationally acclaimed in design and architecture circles today, many argue that the project has failed to provide inter-sectarian and cross-class public spaces for participation. Both the empty wasteland after demolition and the frantically sanitised façades that now form the city centre are widely perceived as a form of violent erasure of Beirut’s history, sociality, and collective memory. 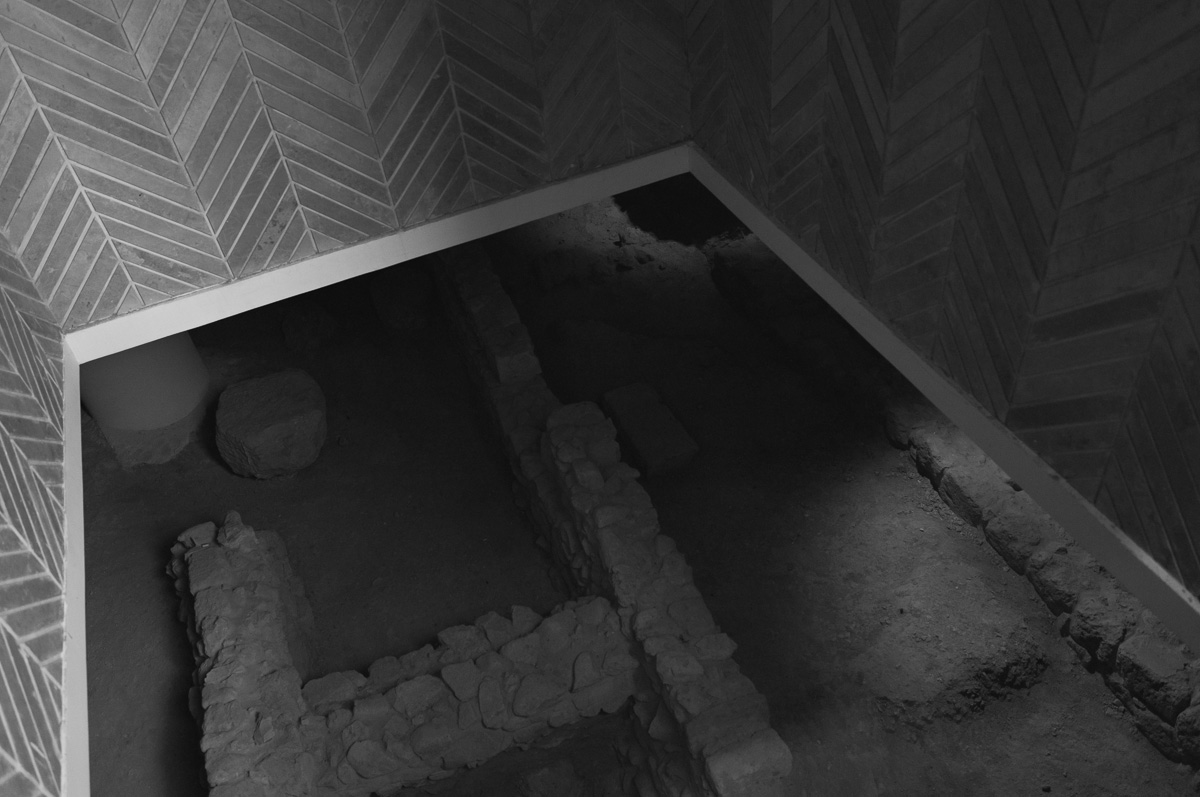 One of the more vocal critics of Solidere, the novelist and public intellectual Elias Khoury claimed in 2007 that “if someone wants to find memories of the war today, they are to be found essentially in literature.” But how does literature respond to  the amnesiac urbanism of Beirut’s reconstruction? What urban landscapes are depicted in the boom of memoirs and novels that were published in the aftermath of the civil war? Some novels nostalgically evoke the pre-war city, now forever lost. Others draw attention to the traumatic reorganisation of the city during the war, which the reconstruction efforts seem eager to erase. Finally, and more rarely, literature exists seeking to reimagine the contemporary city, to facilitate a sense of connection to the otherwise unfamiliar atmosphere of Solidere’s flashy urbanism. 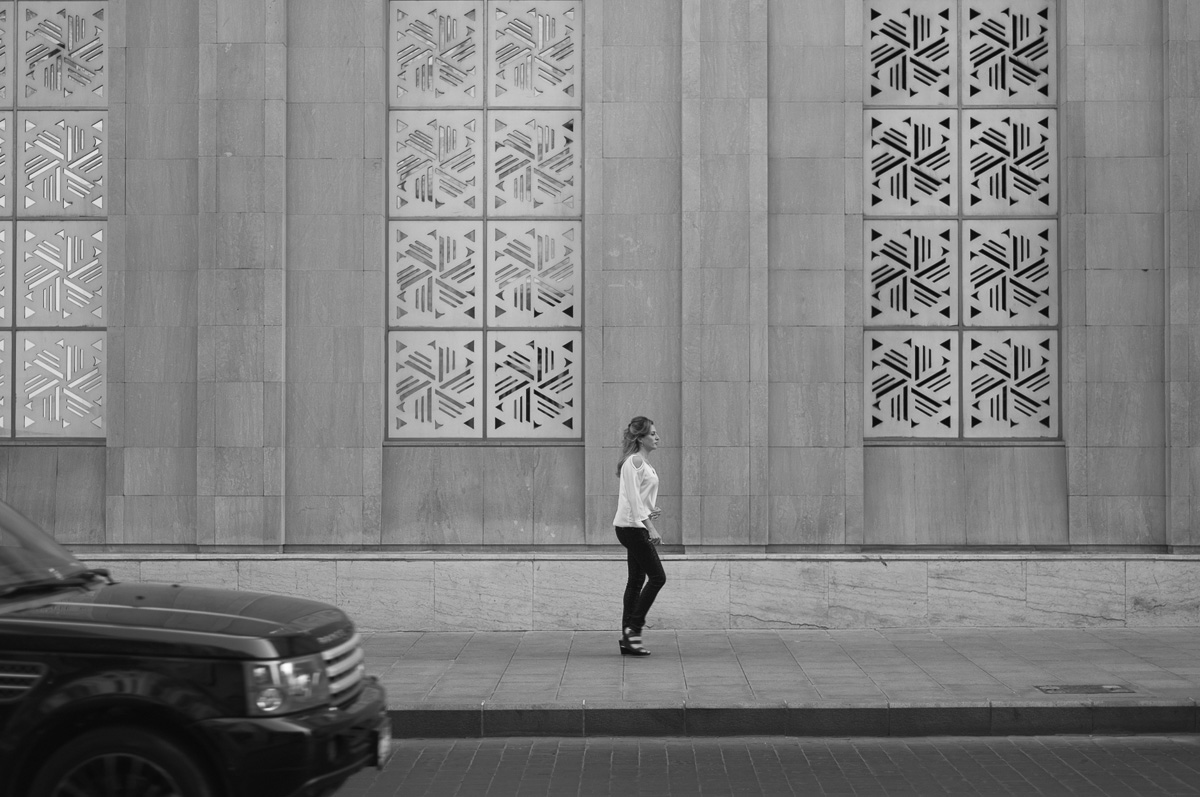 Liberation and anxiety in the pre-war city
Novels set in the time period before the war tend to depict the central district in terms of an overwhelming  sensory stimulation. Often, the city centre is described in marked contrast to the rural background of visiting characters. For example, in  Hanan Al-Shaykh’s The Locust and the Bird, the young female narrator is mesmerised by the cosmopolitan mixture of people and commerce of Beirut’s central district in the 1930s and 1940s. Dazzled by the colours, lights and movements of the area’s consumerist urbanism, Al-Shaykh  concludes that, unlike the more rural and communal neighbourhood of her family home, this is the “real Beirut.” She independently navigates the city, but hides her journeys from her conservative family and strategically avoids a possible encounter with her brother Ibrahim, who drives the tram.

In Rachid Al-Daif’s Dear Mr Kawabata, as a pre-college student in the late 1960s, the narrator ventures from his home in a mountain village to the city to join a political demonstration at the central Martyr’s square. Waiting for the event to start, he circles the streets around the square with his friend, drawn like  a magnet to the red light district in Al-Mutanabbi Street. The passage is marked as much by the boys’ desires and excitement as by their unease in the unfamiliar environment. Their journey towards both sexual and political maturity is cut short by intimidating encounters with authorities: a pimp and a policeman respectively. In both novels, Beirut’s pre-war city centre is imagined as a space of possible liberation, yet remains bound by surveillance and repression. 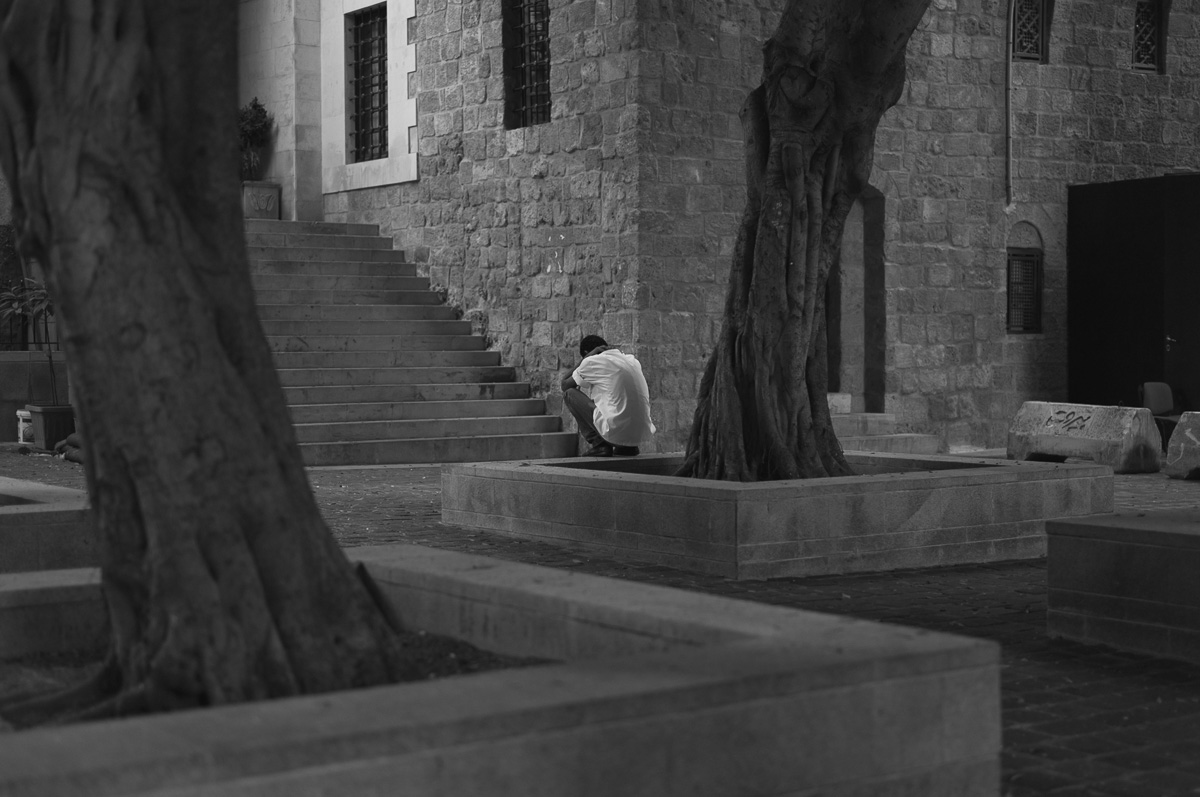 The void on the frontline
In most memoirs and novels dealing with war-time Beirut, the city centre is imagined as a void, or a no-go area. This imaginary represents the urban transformation that forces narrators to the more secure spaces of private homes in secluded neighbourhoods. If the centre does appear in literature, it is a place of exception, a border zone allowing for excessive displays of violence and more liberatory forms of transgression. Elias Khoury contrasts the peaceful orchards of his idyllic childhood neighbourhood to the utter disorientation of battle on the frontline in Little Mountain. He and his comrades advance wall by wall, street by street, in clouds of dust and the sounds of shelling and gunfire, which make them lose all sense of direction: “The narrow street stretches endlessly. Between its beginning and the positions, sounds of footfalls, of groups of fighters shouting and laughing.” Only a ruined, looted church on one end of the city centre and the sea as a mythical destination on the other, form anchor points in the mayhem.

The liminal conditions of the city centre-cum-frontline also allow for life to occur against the odds. For example,  the legendary brothel in which fighters of all factions joined peacefully for entertainment, as depicted in the movie West Beirut. In Hoda Barakat’s novel Tiller of Waters, the protagonist withdraws from the war ravaged city by locking himself up in the cellar of the abandoned textile shop of his father in the ruined souks. Secluded from the rest of the city and surrounded by the colourful tissues that he sensually caresses, he reminisces. When hungry, the narrator ventures outside and roams the wasteland, scavenging for food among the packs of wild dogs that haunt the area. While war novels and memoirs preserve some of the most painful memories that have effectively been banned from the political sphere, the literary imaginary of the city centre as void or as state of exception also corroborates some of the assumptions underlying Solidere’s narrative of (re)building from scratch. 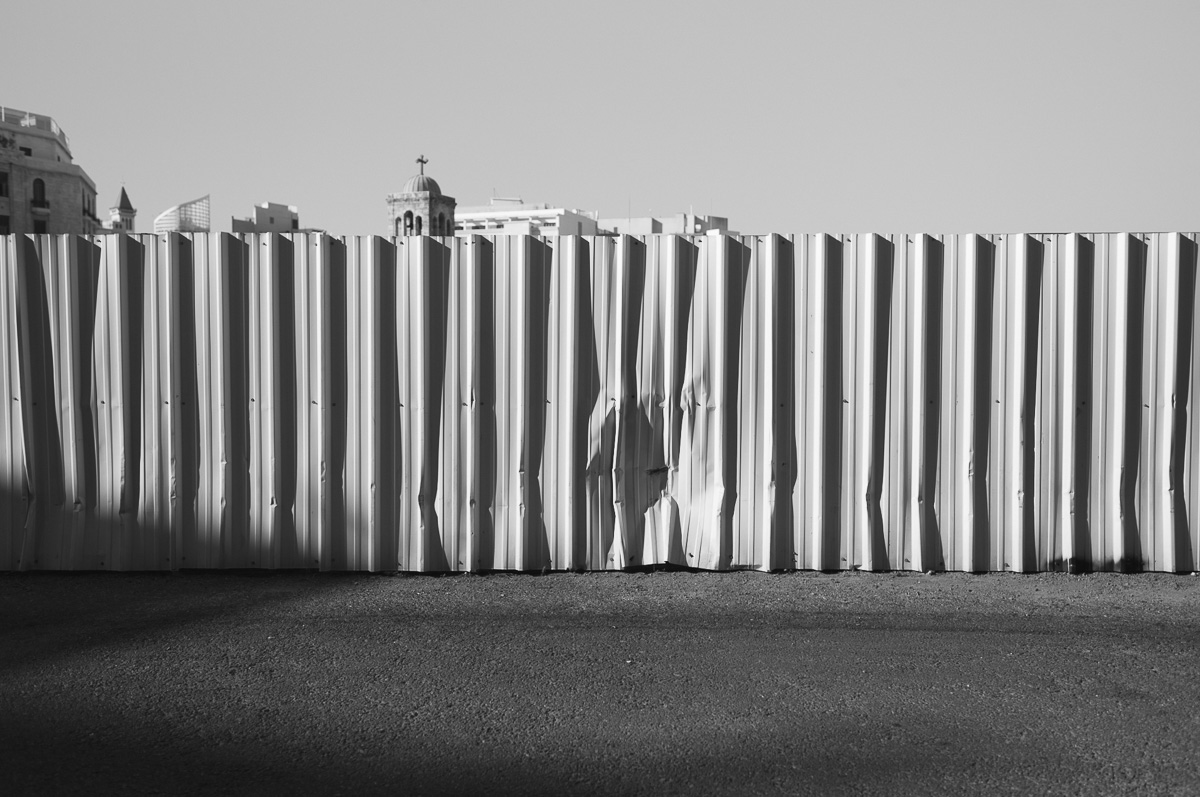 From memories to new socialities
On the site of the wasteland, a new post-war city has arisen. But, as Alexandre Najjar writes, “the regulars have lost their bearings; the memory places no longer exist. All of it seems too artificial. Like a theatre set,” Such alienating urbanism is widely seen as part of wider attempts at “collective amnesia.” In this context, aforementioned literary portrayals of pre-war Beirut’s joie-de-vivre or subversive accounts of war memories can be seen as attempts to counter political and corporate forgetfulness. Hassan Daoud’s novella As She Once Was initially seems to follow the same pattern of reminiscing against erasure. Its middle-aged narrator feels utterly alienated when walking in Solidere’s BCD.

“During my morning journey, passing through the scores of shops whose windows turn as I turn, I don’t find myself looking at the clothes they display but at my own image, reflected in the glass […], wondering whether I appear like a transgressor to the hip pants designed for a generation no longer satisfied with the pants I always used to wear.”

The narrator obsessively reminisces his childhood love Dalal, visiting the ruins of her old home, which were “abandoned, left to deteriorate, right in the middle of a neighbourhood caught up in the chaos of new construction.” But the novella then traces a gradual transformation in the narrator’s view of the district. The turning point is his unusual friendship with three immigrant cleaning ladies. The narrator is fascinated by their sense of style and admires their indifference to the environment. While female immigrant workers are arguably the most vulnerable community in Lebanon, the narrator perceives a form of agency, which contrasts sharply to his own alienation. Their active role in the district’s continual production as a flashy, new and sanitised space allows them to access the urban environment from which the narrator feels excluded. Yet, the sense of alienation vanishes in favour of a new sense of participation, once their friendship has made him aware of the material reality behind the polished surfaces and the labour invested in their protection against dust and deterioration.The narrator realises that these politics do not form some abstract temporal rupture, but a consistent effort depending on human labour. While it does not change the amnesiac spatial politics of Solidere’s reconstruction, the realisation transforms the narrator’s disposition, allowing him to navigate the environment in ways previously unavailable to him. He now enjoys wandering its little alleyways and sometimes even enters the shops of which the windows previously seemed impermeable. 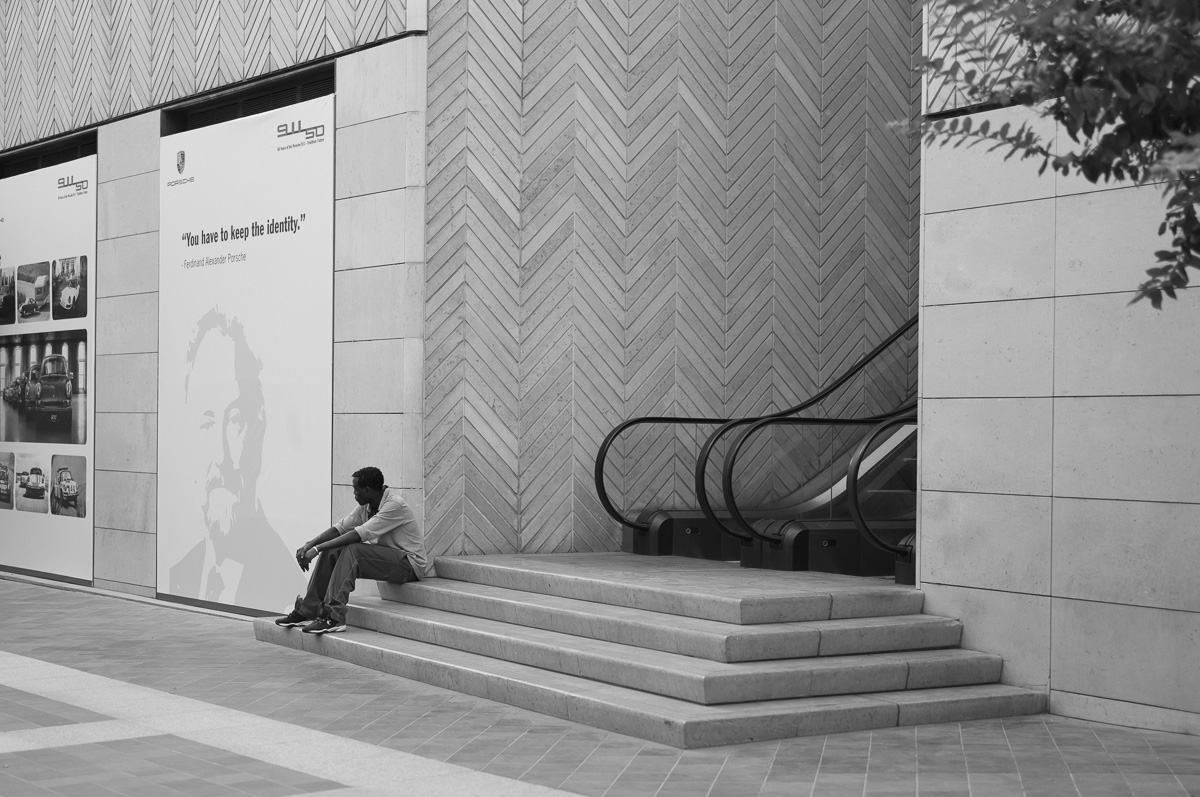 Literary placemaking against postmodern urbanism
The failure of Solidere’s sanitized urbanism to accommodate collective memories and a pluralist sociality can be pitted against the role of literature to preserve urban memory and imagine a multi-layered urban geography. The novels presented show the nostalgic celebration of a vibrant, consumerist, and cosmopolitan pre-war urbanism, as well as examples of extreme violence when the city centre was turned into a frontline during the civil wars. While these novels counter the erasure of physical memories in the urban landscape by cultivating memories in narrative, they also perpetuate the sense of absolute rupture that Solidere’s myth of urban rebirth implies. Hassan Daoud’s As She Once Was moves beyond the opposition between a forgetful urban landscape in the present and a commemorative literature evoking a past city, now forever lost. Rather than the memorializing labour of the novels discussed above, Daoud’s work is situated in the here and now. Rather than lamenting bygones, the novella can be seen as a form of literary placemaking that encourages attempts to establish meaningful social interaction in order for life to flourish again, even if amidst Beirut’s architecture of erasure. 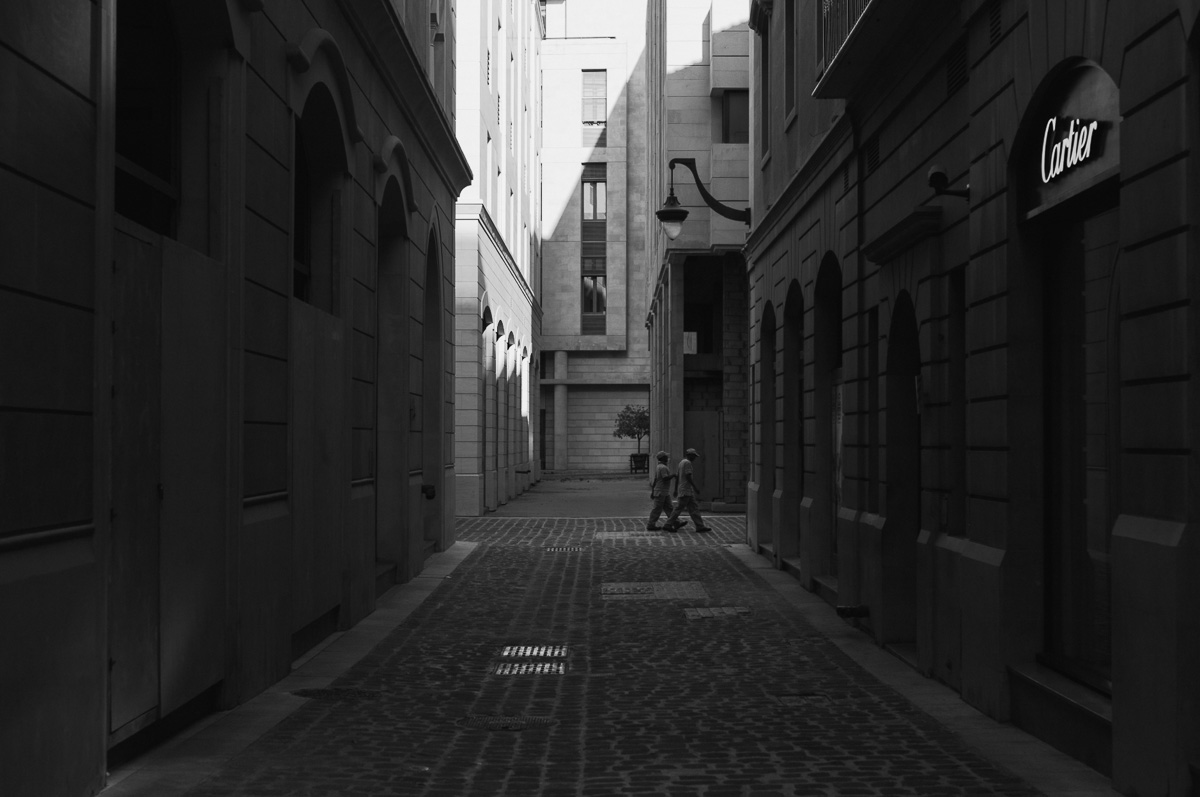 Photographs from the series “Downtown Beirut”, by Sébastian Dahl.

Judith Naeff
Judith Naeff is Assistant Professor of Cultures of the Middle East at Leiden University, the Netherlands. Her book "Precarious Imaginaries of Beirut" explores how the post-civil-war city of Beirut has been imagined in art, cinema and literature. She co-edited a volume of academic essays on the intersection of new technologies of image-making and the urban condition in "Visualizing the Street", which is due to come out in the Cities and Cultures series of Amsterdam University Press.