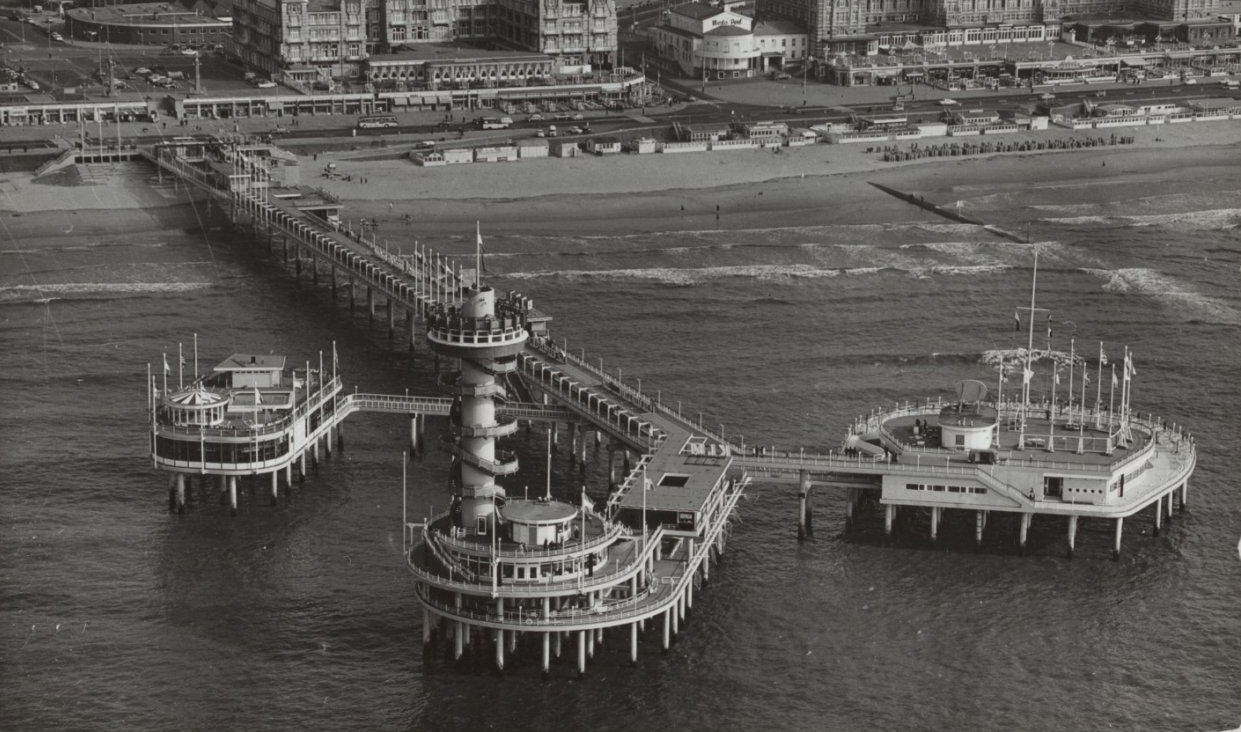 Failed Architecture organised a debate on architecture in seaside towns at The Hague's TodaysArt festival, with a special focus on Scheveningen. This is a report on our findings.

On Wednesday September 24 Failed Architecture organized a discussion on the often criticized urban environs of Scheveningen, a Dutch sea side resort adjacent to the city of The Hague. Together with a range of experts, we explored the defamed seaside architecture and urbanism from a historical and international perspective. 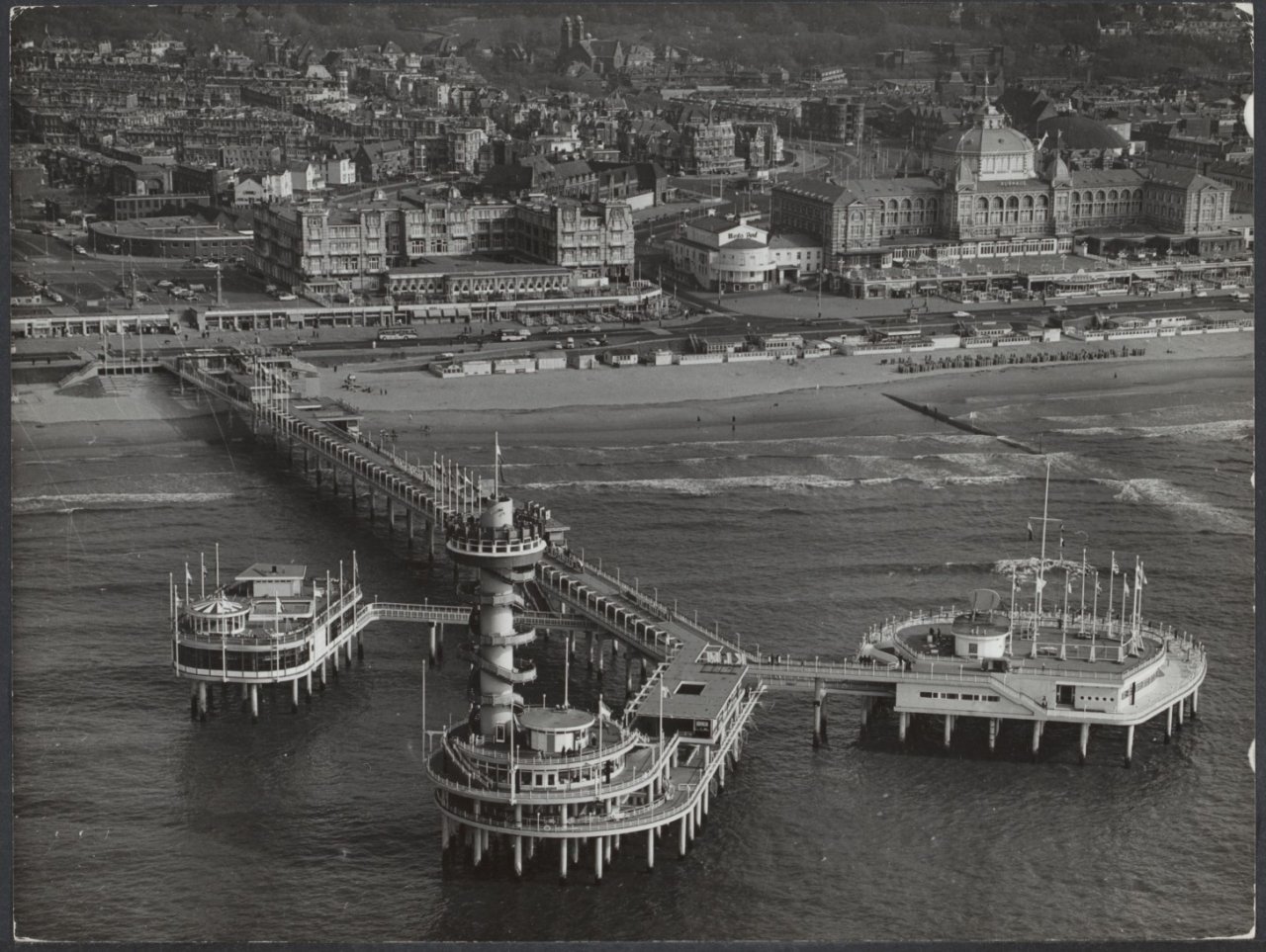 Scheveningen’s pier and Kurhaus in the early 1960s

Already for decades, Dutch seaside resorts are coping with high vacancy rates and reputation issues. As our first speaker Thimo de Nijsexplained, the origins for their relative decline can be found in the Second World War, when the German occupier tore down most of the nineteenth-century hotels and mansions lining the sea shore. Scheveningen’s recovery during the 1950s was quick, although it became increasingly clear that the hotels and restaurants still intact were lagging behind in modernizing their businesses for a new era of mass consumption.

Spirits were high when private developer Reinder Zwolsman acquired some of the most prestigious hotel businesses in the early 1960s, but were soon dashed again as the real estate magnate could not gather sufficient financial means to get redevelopment going. A period of staggering decline set in, with hotels and other tourist facilities burning down and holidayers preferring the more reliable weather conditions and cheap prices in Mediterranean surroundings. The advent of cheaper foreign travel during the 1970s decreased the demand for traditional ‘bucket and spade’ holidays. Scheveningen and other Western European seaside towns that had flourished since the late nineteenth century found themselves losing their economic purpose.

Policy makers and construction companies responded to the spiral of decay by redeveloping the coastlines into entertainment and holiday residencies for the masses. In terms of aesthetic qualities and sound urban planning, most of these efforts were in vain, with cheap architecture leading to an equally cheap reputation. In order to compensate for the high preservation costs of the renowned Kurhaus, construction company Bredero encircled the building with a mishmash of ziggurat, high density apartment buildings – blocking lines of sight and access to the sea. However, it turned out the masses were quite happy with the improved entertainment and catering facilities.

During the 1980s and 1990s day tourism increased rapidly due to a economic diversification of accommodation, catering and entertainment facilities. When answering the question whether Scheveningen’s central area should be considered a case of failed urbanism, De Nijs said it seems to function well as place to live, shop and eat. Maybe a new redevelopment cycle – as proposed by some developers and policy makers – is not necessary after all. 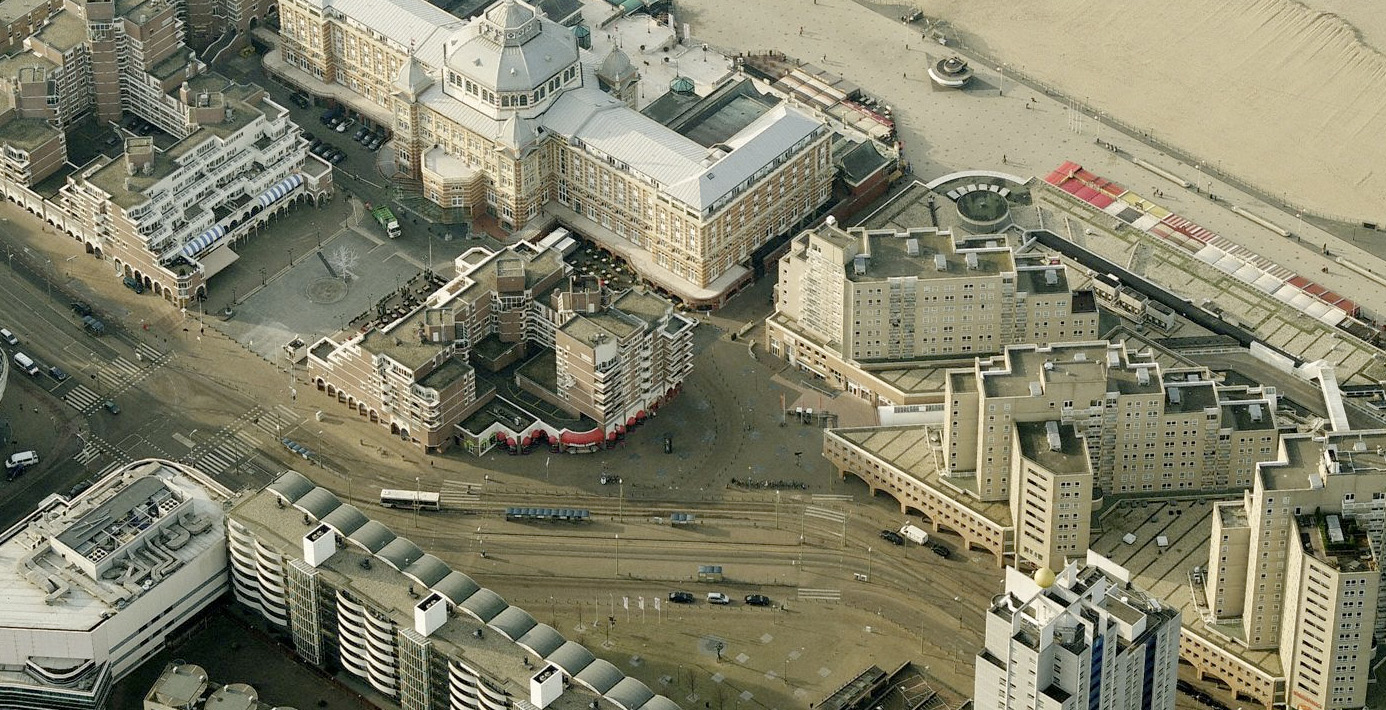 Probably one the most popular alternative destinations for Scheveningen during the 1970s was Benidorm, a coastal town at the Spanish Costa Blanca. Elena Cabrera Vacas, co-founder of AMMA Architects and winner of the Jaap Bakema Fellowship in 2011, explained the rise to prominence of this small fishing village. During the 1960s economic boom Benidorm was envisioned as a tourist hotspot, which was heavily incorporated into its urban plan. With the opening up of the borders and advent of British tour operators Benidorm became an all-year round destination. Due to the city’s absence of height restrictions, an impressive skyline dominated by factory hotels came into existence.

By constructing taller condominiums and rotating buildings in various directions, a maximum number of hotel rooms and a view on the sea was guaranteed. The vertical volumes rose quickly during the 1970s, seeking optimum positions to obtain the best views. Like an audience looking at a stage, most of the developments are situated parallel to the beach facing south. At street level the urban space became the tourist space par excellence thanks to its diversity and sequence of spontaneous entertainment shows and chance encounters. The current Benidorm, described by Henri Lefebvre as ‘the most habitable city built after the Second World War’, basically results from fundamental decisions to design a workable urban plan combined with clear and simple parameters on the plot. 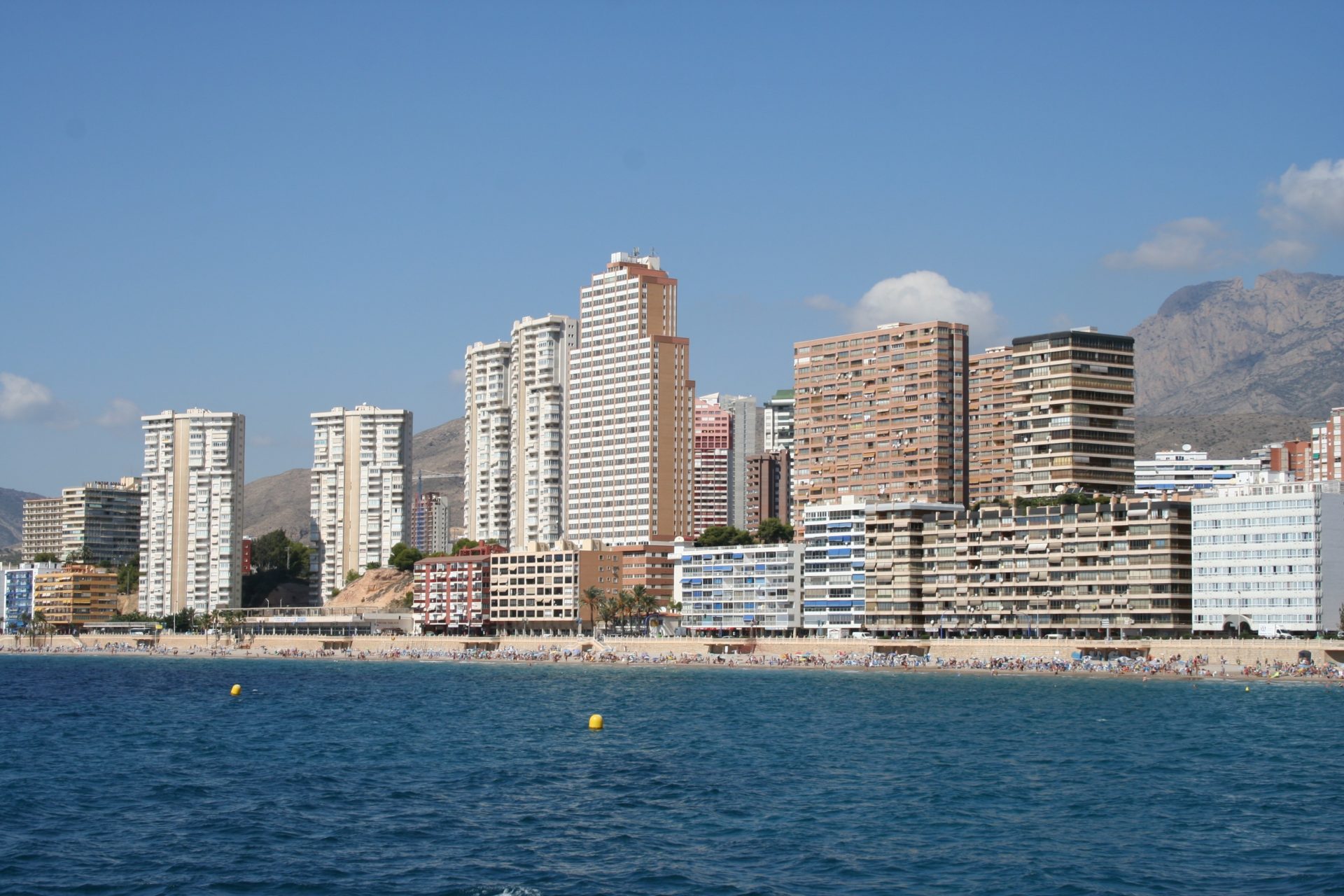 The contrast with another famous Spanish holiday location, Marbella, could not have been any bigger. As Cabrera Vacas’ research demonstrates, it wasn’t until 1968 that Marbella’s first urban plan was approved in order to study future tourist settlements. Various tourist units interconnected to constitute a self‐sufficient tourist area were mapped out, but there was no proper definition of a physical urban plan and urban fabric. In the 1980s, numerous scattered residential and tourist settlements began to spread out along the coastline and inland slopes. The compact city model was quickly turned into a diffuse model based on the expansion of the urban periphery. A real estate boom fueled by Arab investments and the popularity of real estate as a means of money laundering only increased the spreading of urban sprawl during the 1990s.

This has resulted in a huge urban periphery based on the use of the private car and, consequently, a total dependence on it. The excessive privatization of land assigned to residential tourist use has caused imbalances in public spaces and facilities, and obstructed spatial permeability and public access to the coast as well. According to Cabrera Vacas, the urban models of both cities need to become more complex by introducing more functions; the injection of more culture would also attract more discerning visitors and inhabitants. As tourist models, it seems fundamental that they diversify the market and explore more sustainable leisure activities.

Jacqueline Heerema, a conceptual artist working at the Satellietgroep collective, provoked the audience by asking to whom the sea actually belongs. She said that in comparison to some parts of other Western European sea coasts, Scheveningen seems to be well off. The Belgian coast is an almost continuous sequence of rectangular private housing developments, developed during the postwar era to cater for mass tourism and the Belgium dream to spend retirement at a seaside location. Since every Belgian is said to be born with a brick in his stomach, it should come as no surprise the coastline resembles a blueprint of the country’s eclectic styles and tastes. During our event, this was illustrated by the pictures of Belgian photographer Jo Struyven, who in 2011 compiled a panorama shot of the 65 kilometres long coastline. 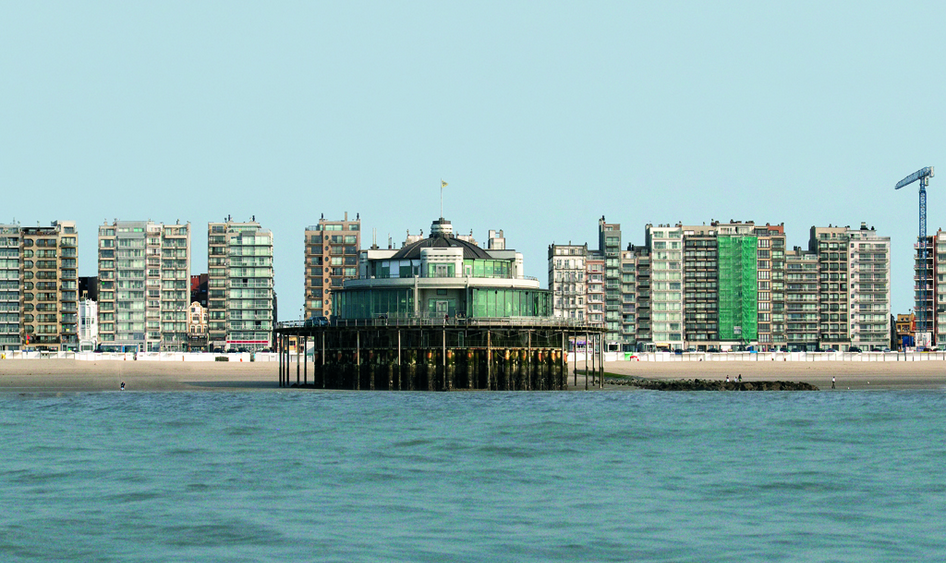 Satellietgroep, the art initiative Heerema is part of, was triggered by the alleged lack of involvement of arts and culture in the master plans for coastal transitions in Scheveningen and other Dutch coastal towns. According to Heerema, living in the Netherlands means living in an artificial man-made environment. The Dutch are masters in disguising the cultural landscape as a natural one, with architects and engineers tending to design, construct, reconstruct and deconstruct the coastal landscape to fit it to the people’s needs. They come up with seemingly uncomplicated solutions, seamlessly merging our infrastructural needs with entertainment wants.

Though we perceive and manipulate the coastal landscape as a natural landscape of beaches and dunes it is in fact a cultural man made landscape, and therefore coastal infrastructure and architecture such as bunkers, the Delta Works and tourist facilities reflect our relationship with water and the sea. Fear, resilience and fun are all ingrained in our multilayered coastal architecture. Heerema said Scheveningen’s planners and politicians seem to forget this by continuously superimposing urban ideal images. With Badgast, Satellietgroep asks artists in residence to take a step back and research the seaside as a place of mental and physical freedom, thereby opening op new perspectives on Scheveningen’s identity. 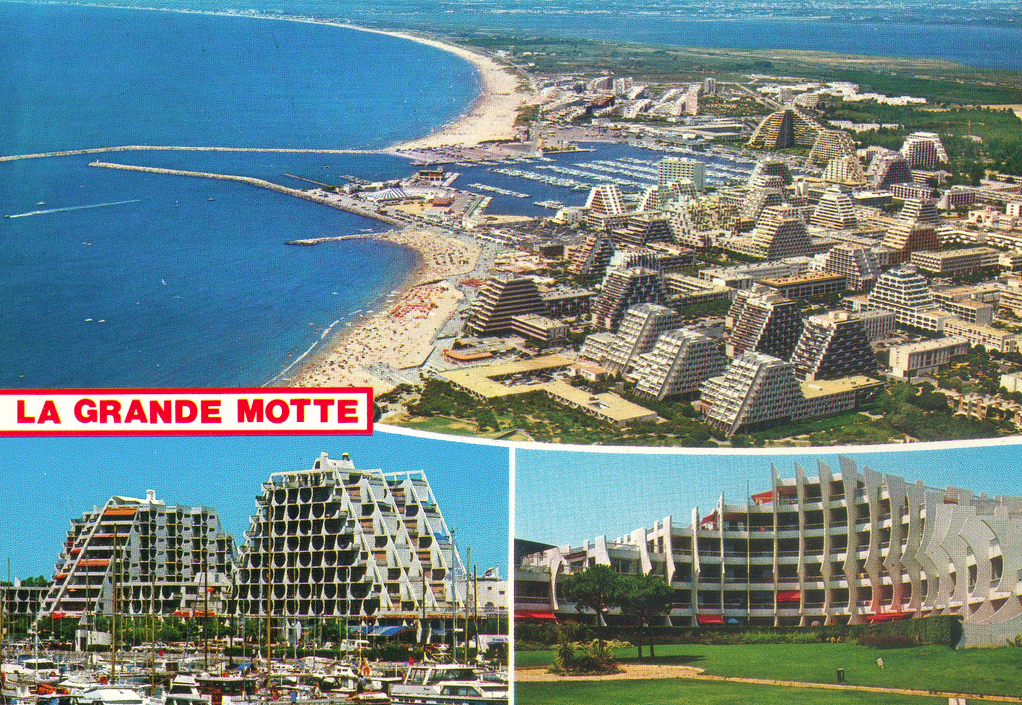 Nowadays, this identity is threatened again by grandiose plans, in which post-war architecture is usually used as a scapegoat. However, after decades of relentless redeveloping, maybe it’s time for a bit more patience. In the days running up to the discussion the Failed Architecture team resided at Badgast, from where we explored Scheveningen’s urban and coastal landscape. Interestingly enough, the town is usually dismissed in its entirety for its ugliness, by either locals, visitors or experts. It has won various prizes for the ugliest town or boulevard in the Netherlands, and visitors of the world’s largest architecture forum SkyscraperCity aren’t very positive either. In response to the way the entire area is perceived as one homogenous, failed development, we decided to isolate the landmarks that make up Scheveningen’s coastal strip, and closely observe them one by one.

The separate buildings are crude and oversized to Dutch standards, but almost all of them are at least representative of developments in corporate architecture during the 1970s, 1980s and 1890s. The slideshow below features some of Scheveningen’s most remarkable icons, such as the Grand Hotel complex (1976), Seinpost complex (1980), Residence Savoy (1981), Carlton Beach Hotel (1985) and the Leonardo da Vinci towers (1999). Together, these various buildings constitute an urban landscape that is rather unique in the Netherlands in terms of scale, ambition, diversity and intensity. Despite their aesthetic shortcomings and planning imperfections we would oppose a new cycle of redevelopment, as proposed recently by a number of local stakeholders. In most of these plans, large parts of the current urban fabric will be demolished and replaced with something that will be disliked again soon. Therefore, it might be the best solution to save the current architectural hotchpotch and improve its public space here and there, as its appreciation will surely increase over the years.