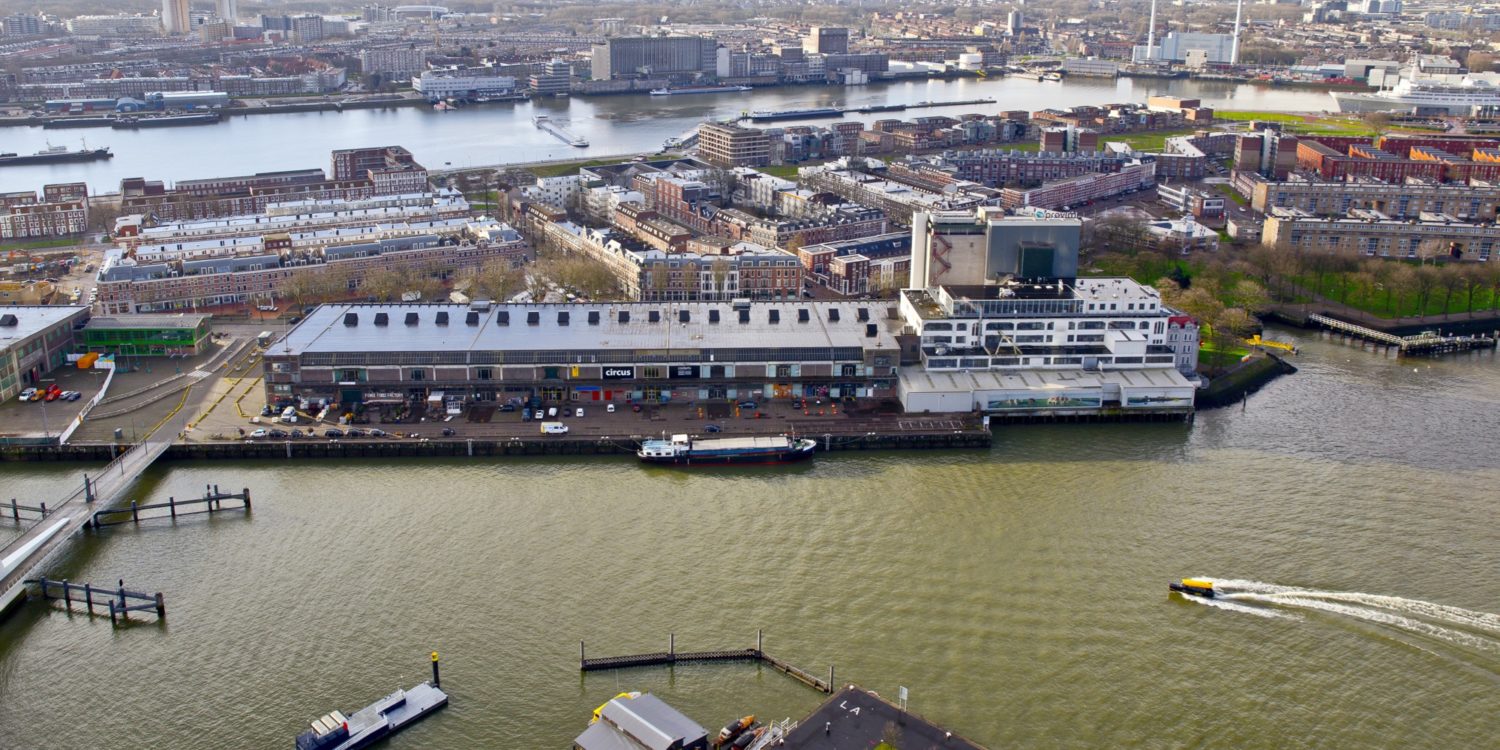 Can architecture biennales be more than travelling design circuses? FA's Mark Minkjan and René Boer are critics-in-residence at IABR 2016 to find out.

Architecture and urbanism biennials are often said to set the agenda for spatial practice. A quick look at the focus of some of this year’s larger architecture programmes – the Venice Architecture Biennale and the Shenzhen UABB – is promising. The events are no longer about design for the sake of design. Rather, their aim is to rethink the city, and investigate how we can direct massive urbanisation processes toward more social and environmentally friendly outcomes. The International Architecture Biennale Rotterdam (IABR) already has a tradition of more systemic analyses, and the 2016 edition more than ever seems to focus on pressing issues such as urban equality and sustainability.

The world is on fire, and the flames have ignited enormous migration flows. The urban real estate boom has re-emerged, but social and environmental crises continue apace. Austerity politics provide the perfect excuse to further dismantle the welfare state. What some call the ‘triumph of the city’ at the same time generates increasingly vulnerable living conditions for those who are not at the top of the pyramid. Governments retreat and the private sector takes over the production of space. Simultaneously, the increasing consumption power of a growing global middle class is destroying our environment and feeding obesity. While imbalance reigns, we notice the architectural world’s increasing desire to address the elephant in the room. ‘This can’t go on any longer.’ A certain (re-)politicisation has taken root.

Is this just a temporary sensibility that will settle down now that the cranes are once again dotting the skylines of so many cities? We hope not. One thing is for sure: this revamped critical discourse has already started to challenge the dominant position of the ‘successful’, western, white, male architect. Instead of the glorified make-up artist drawing up unrealistically polished futures in a real estate bubble, we see a wide variety of spatial practitioners from around the world creating communities, finding political solutions, educating citizens to shape their own environment, cutting carbon emissions, fostering local economies and improving people’s access to amenities. This is architecture as it should be: a social and public project.

The same socially conscious attitude can be found with the IABR, which has, since its foundation, looked at spatial design as the result of wider societal, political, environmental and technological forces, but also as a tool to respond to its immediate urban context. IABR director George Brugmans has pushed this agenda since the biennale’s early days and has made the IABR a platform to continuously work on the ‘urban’ with a wide variety of spatial practitioners. The theme for this year’s biennale – ‘The Next Economy’ – further allows its participants to conceive new urban imaginaries. As Maarten Hajer’s curatorial statementreads: “we imagine the city of the future: the healthy and socially inclusive city, the productive city, and the sustainable green city. The city in which public space once again takes centre stage.” This makes the IABR a relevant and ambitious project, and we are pleased to announce that the IABR has invited us to be critics-in-residence for this year’s edition.

IABR–2016 will in part be a presentation of projects from around the world that give us a glimpse of what the Next Economy might look like. Beyond a temporary exhibition, IABR aims to be an ongoing platform for design research. This ambition to be locally and institutionally embedded is especially resonant for us. Architecture biennials too often feel like just another stop for the travelling circus of design and theory stars, touring (and polluting) the world to repeat the same old in-crowd conversations while adding little local value. The Shenzhen UABB was an example of how at the local scale, an architecture festival mostly functioned as a real estate fertilizer, an incubator for the developers who sponsored the event. Oslo’s upcoming Architecture Triennale is more promising in this respect, having international spatial professionals actively engage with local situations in Oslo and elsewhere.

One way in which IABR is involved in broader issues and multiple locations, is through the so-called Ateliers: long-term research design trajectories (running up to multiple years) involving collaborations with local and national public authorities. The focus of the Ateliers leading up to IABR–2016 is on themes including the productive city, urban health and new energy landscapes. They were carried out in Brussels, Groningen, Rotterdam, Albania, Utrecht and on the North Sea, and their outcomes will be presented and discussed at this year’s venue.

Locally, IABR connects to urban developments of the transitioning harbour area and surrounding neighbourhoods that rank high on lists of problem areas. It will look at how the ‘next economy’ can be stimulated here, while preserving and strengthening the position of current residents, amenities and areas of local significance that feel the heat of gentrification processes. Partly taking place in the local neighbourhood, IABR–2016 cooperates with local stakeholders, provides a stage for people and ideas from Rotterdam South, and assesses current policies and plans for the area, from a perspective of inclusiveness and local added value.

Moreover, IABR–2016 consists of a 10-week programme of scheduled and spontaneous talks, discussions, walks and workshops. Just a few of the contributors include architect-writer Keller Easterling (Extrastatespace and Subtraction are two of her books that we particularly like), Anab Jain (Superflux), the Guardian’s architecture critic Oliver Wainwright, Jack Self (REAL foundation), Edgar Pieterse (African Centre for Cities), Kees Christiaanse (architect, professor at ETH Zürich) and the Dutch Government Architect Floris Alkemade. Many of these events and conversations take place at the centre of the impressive exhibition space – a former harbour warehouse on a peninsula in the south of Rotterdam.

As a critical media partner, our aim is to move beyond shallow and descriptive coverage of architecture events. We will try to reflect fairly on the projects on show, the fruitfulness of the debates, the potential legacy of this year’s IABR, and the role of biennales in general as a cultural space. We’ll judge, ask questions, debunk hollow rhetoric, and contribute to the discourse about the ‘next economy’.

Will the next economy be able to reinforce the urban commons? Does it consist of smarter public-private partnerships that generate local value before stock market value? Does it entail CO2-negative energy systems? What is the government’s role in this next economy anyway? And what, for that matter, is the role of architects? And last but not least, what democratic processes are needed to facilitate ‘the next economy’?

We’ll try to investigate these issues through projects exhibited at IABR, by comparing them to projects not on show, by judging their potential impact and scalability and by participating in the conversations as well as talking to experts and practitioners. And while intend to highlight best practices we find it equally important to spot potential failure and draw hard lessons for future projects. With critical enthusiasm, we look forward to the IABR. We hope that you do too, and we encourage everyone to contribute to the debate about alternative urban futures.

Mark Minkjan
Mark Minkjan is an urban and architectural geographer. He is Editor-in-Chief at Failed Architecture and produces the Failed Architecture Podcast. He has written for publications including VICE, The Guardian and The Architectural Review. In 2016, Mark received a talent grant from the Dutch Creative Industries Fund to develop new forms of architecture criticism. He received the Geert Bekaert Award for architecture criticism in 2017 and curated the 2019 exhibition “The Right to Build: Self-build Between Dreams and Reality”. Mark currently teaches at Amsterdam's Academy of Architecture and Gerrit Rietveld Academy.
René Boer
René Boer (1986, he/him) works as a critic, curator and organizer in and beyond the fields of architecture, art, design and heritage. He is based between Amsterdam and Cairo and is a driving force behind the Failed Architecture platform. In recent years he developed a wide array of exhibitions, public programmes and research projects, often with a focus on spatial justice, urban imaginations and queer tactics. His current projects include Contemporary Commoning, an experimental exploration of the relation between art and (urban) commons; Terraforming Indonesia, a programme investigating and reimaginging large-scale land reclamations, in collaboration with the ruangruapa collective; and Smooth City, a forthcoming publication on the obsession with perfection in cities worldwide.