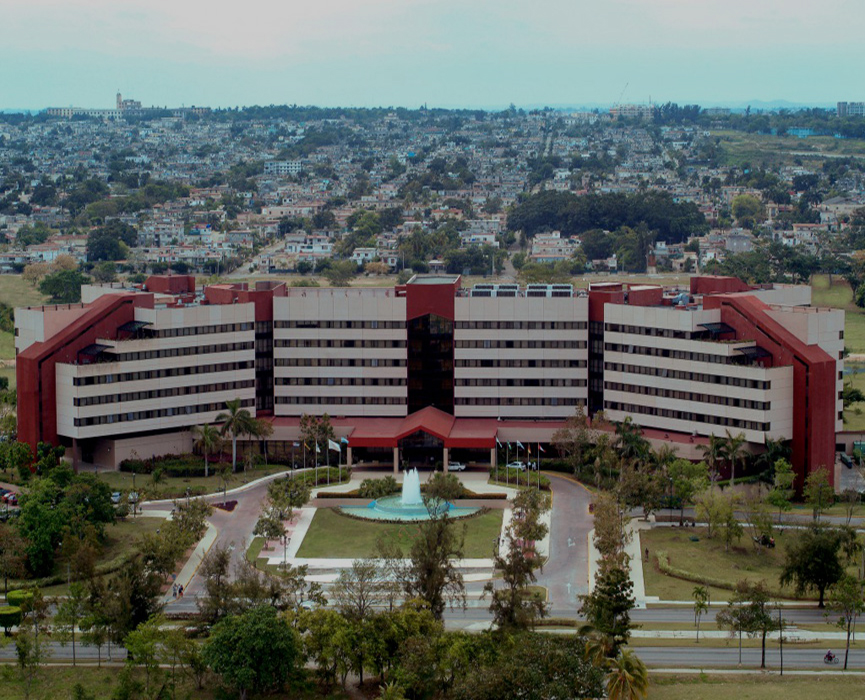 Mario Coyula-Cowley analyzes a capital-driven complex of hotels and office blocks in Cuba's capital, disconnected from the city and the majority of Havana's population.

When analyzing failed architecture in Havana, it might prove more insightful to examine a specific complex of new buildings in western Havana than just one building. This collection of constructions consists of seven hotels, all designed by Cuban architects, and eighteen blocks with offices and service and retail space. It is located in Monte Barreto, a large expanse of land of about sixty hectares that remained undeveloped until the late 1970s, with small caves, thick wild bushes and elusive mongooses, situated along a rocky shore. The site was crossed by the beautifully landscaped Fifth Avenue, the back spine of the Miramar neighborhood. 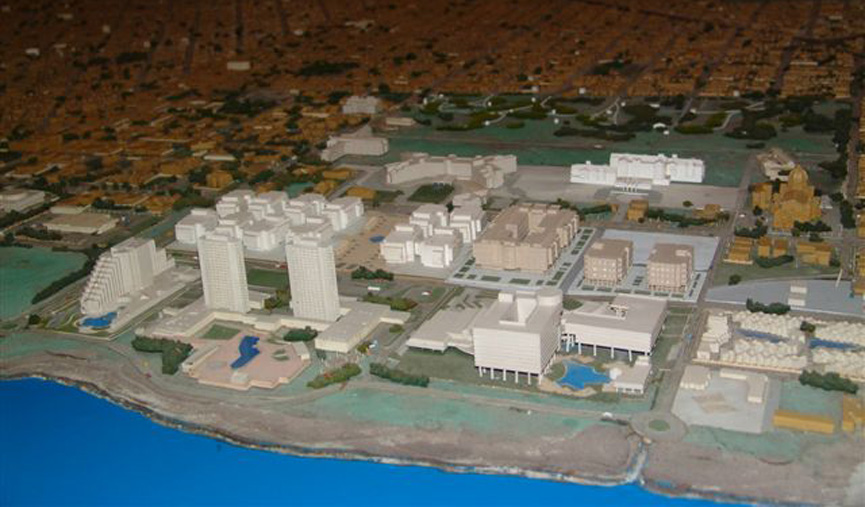 Overview of the Monte Barreto area.

The first building in the area was hotel Tritón, inaugurated in 1979, and followed approximately ten years later by a twin one, Neptuno. Both were close to the ocean and designed by the late architects Vicente Lanz and Margot del Pozo. The architectural design was limited by rigid construction technologies demanding short spans. In 1998 the Meliá Habana hotel was built, also in the front strip close to the shore. It was designed by the late Abel García and its architecture was richer, more sculptural and with attractive inner public spaces. As with actors and models, one side is more photogenic than the other. Facing Fifth Avenue, but on its southern side, architect Raúl González Romero built in 2000 the 427-room Occidental Miramar Hotel. The initial sketch for a high-rise building was rejected by the planning authorities, in an attempt to preserve the traditional low profile of Fifth Avenue. 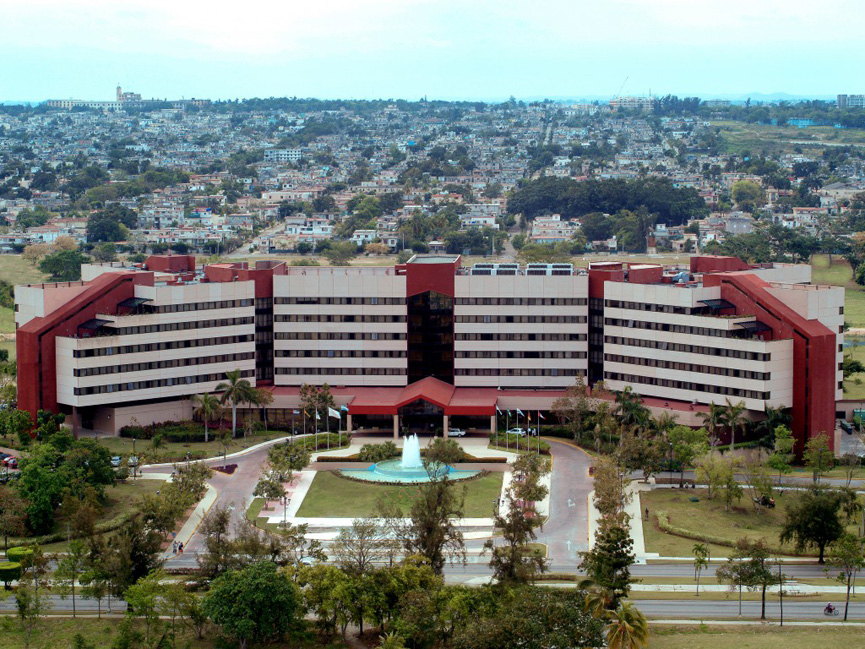 Actually, this profile characterize the earlier, eastern sector of Fifth Avenue, which predominantly consists of single-family houses from the 1920s. In the Monte Barreto sector, however, this setting has been disturbed, among others by the massive concrete tower of the Russian embassy. In the end, the Occidental Miramar ended with a lower height but a much larger width, resulting in a bulky volume, inconvenient for pedestrians. 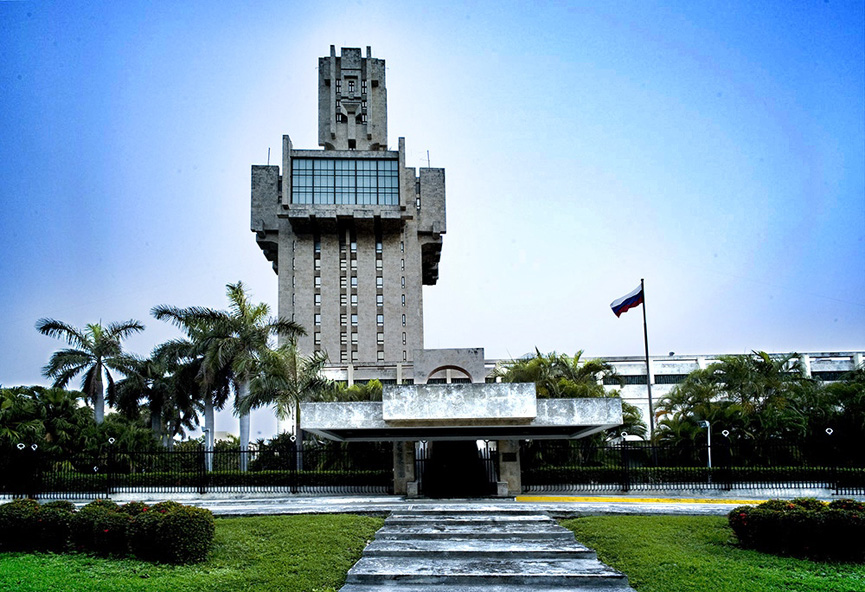 In 2002, Roberto Caballero did the Panorama hotel, a pyramidal structure whose two main façades are all clad in glass, turning the building into a giant sun collector. This hotel is close to the ocean, but the only openings in the rooms are small windows barely big enough to stick the head out and smell the nearby sea. Architect Pedro Galiano Jr. did in 2005 the Monte Habana Aparthotel, a structure facing 70th Street and slightly detached from the rest of the hotels, with a failed attempt to compensate the lack of architectural interest with a striking palette of greens, violets and yellows, otherwise meant to fade under the harsh tropical sun. 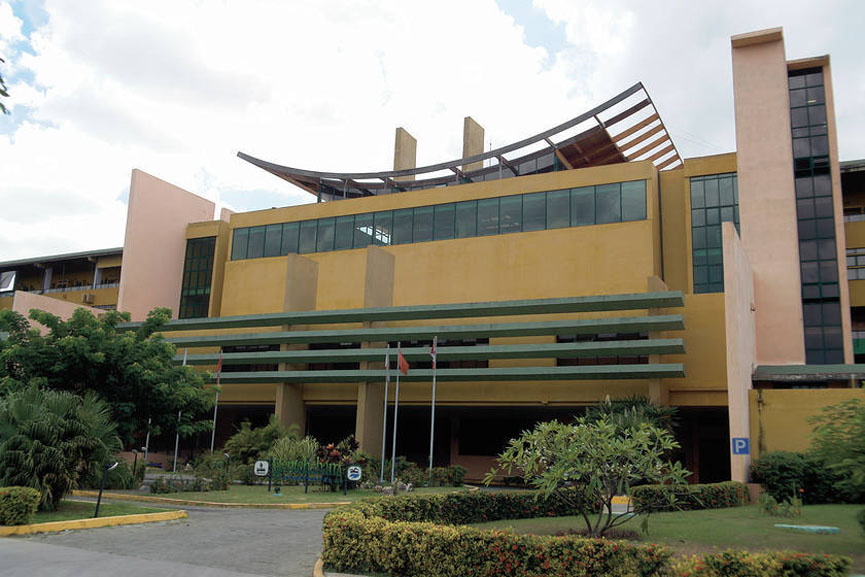 The seventh and last hotel, Quinta Avenida, is also south of Fifth Avenue, between the Occidental and the big dome of the pre-1959 Jesús de Miramar Catholic church. This hotel was designed by architect Roberto Almodóvar and opened in 2007. Its architecture is the typical kind you can find in any tropical resort, a sterile hybrid of Spanish Colonial, Mediterranean, and Neoclassical styles, meant to please clients mostly interested in comfort. This bland architecture of arches, balusters and clay tiles has also influenced individual dwellings in the maceta style, bred by those nouveau-riche looking for a status symbol of their recently acquired wealth. This influence originates not only from touristic architecture, but also from the lifestyles of relatives living in Miami and from Latin-American TV soap operas.

The series of eighteen small cubic blocks of the Miramar Trade Center, north of Fifth Avenue, is a joint venture with Israeli private investors. It started in 1999 with the Jerusalem building, designed by Canadian architect Tarek-el-Katib. The general layout of the Monte Barreto area, including the Trade Center, created East-West strips parallel to the shore. The most southern strip, with 9th Avenue as a border, remained un-built as a natural reserve. Tourism authorities also wanted to develop that area, but luckily it happened to be the natural drainage of nearby neighborhoods, with caves and pits that also made the site difficult for construction. Perhaps a wiser general plan would have created a central linear park running North-South, starting at the natural drainage area and opening into the sea, with all the buildings on both sides facing directly into it and looking indirectly into the ocean.

Al those constructions together form a Monte Barreto that is a suburban, car-depending, American-style center in the Havana outskirts, with the sole functions of providing lodging of foreigners and office and retail space. It is meant for one kind of hard currency, which is not the currency in which regular Cubans are paid, and for one kind of people, mostly foreigners and Cubans with access to that hard currency. Everything else that is needed to ensure the vitality you would expect in a center is missing. It lacks housing for locals, public spaces, landmarks, schools, playgrounds, museums, theaters, art galleries, bars, or restaurants. Tourists staying at those hotels need to leave the area for the traditional consolidated city (Old Havana, Centro Habana and Vedado), if they wish to find something to do. This is an artificial enclave of relative wealth, without relation to the city and to the majority of Havana’s population.

If all the resources used into the making of this lifeless center would have been poured into the traditional CBD of Havana, where the best former department stores in Cuba now stand neglected, it would have benefited the city much more. Sadly, much-needed foreign investors, especially large ones, tend to impose their programs, tastes and expectations. And Cuba badly needs the money. Even worst is the fact that for many Cubans, including some decision-makers, urban development is associated with glitzy patterns developed in consumer societies that reflect dependence, exclusion and a lack of sustainability