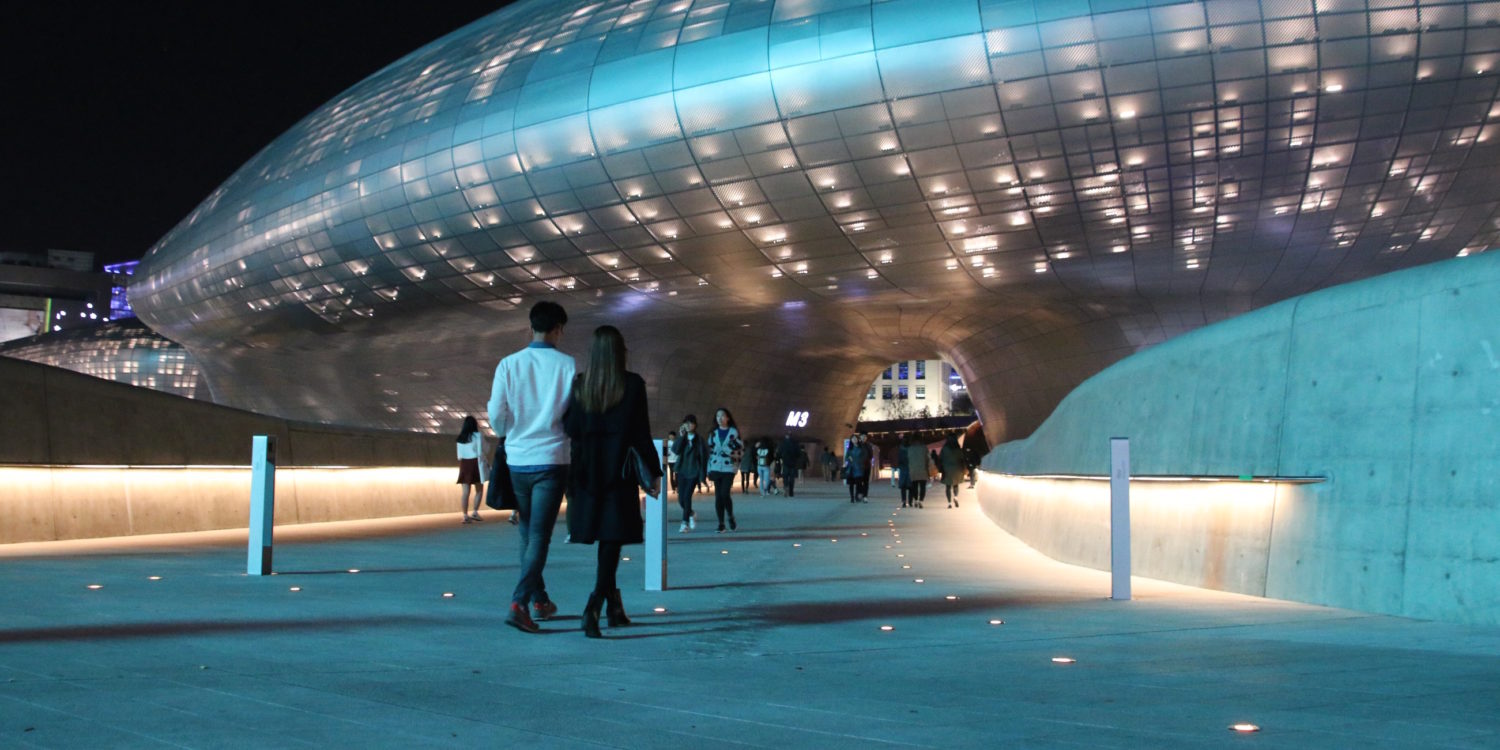 What legacy does the the famous British-Iraqi architect, who passed away early 2016, leave in Seoul?

In February 2016, Failed Architecture conducted a short but intensive research workshop on Seoul’s Dongdaemun Design Plaza, designed by the controversial London-based architect Zaha Hadid. Shortly after the workshop, Zaha Hadid passed away at the age of 65, leaving a remarkable legacy. Her building, and the discussions with the workshop participants, inspired Failed Architecture’s René Boer to write the following reflections on the ‘DDP’.

The curved shapes of exit number 1 of the Dongdaemun History and Culture Park underground station are an odd sight in Seoul’s straightforward transport system, and indeed lead to one of the oddest novelties in the South-Korean capital. Passing through the glass doors of exit number 1, you suddenly emerge into the spacious world of Zaha Hadid. Curved, concrete surfaces create an attractive and well-maintained plaza a few meters below street level, characterised by a visual consistency that is rare in a city like Seoul. The irregular contours of the plaza and a large, concrete bridge direct your gaze towards a large structure of an undefined but exciting shape, which is entirely clad in metal plates. It’s the world’s ‘biggest atypical building’, according to one of the signs. So atypical in fact, that it’s hardly a building.

It’s indeed more of an ‘architectural landscape’, as Zaha Hadid described it, where the undulating shapes of the exterior and the surrounding public space easily merge into the structure’s irregular interiors. From any position in the surrounding landscape, it’s these architectural motions that lure you into the DDP’s main structure. Receptionists will bow upon your appearance, after which a bright white corridor, that turns out to be a large, spiral staircase, entices the visitor to ascend into the building. At the top, it spits the visitors out again into the crisp, blue-sky afternoon of Seoul’s cold winter days, after which you descend on another curvy surface towards the park. Following the park’s landscaping, you pass through some irregularly shaped pavilions before being conducted back into the main structure.

At first, the DDP seems open and inviting, but the building immediately takes control. Its design is virtuoso but aggressive, leading and misleading its visitors. While Hadid claimed the building wants to ‘make people think’, it feels like a hamster wheel eliminating any opportunity for mindful wandering or independent thoughts. If the DDP hasn’t left you totally numbed, it’s most likely you will wonder about the possible purpose of this whimsical landscape. It’s supposedly a ‘design plaza’, according to its name, but it seems to predominantly consist of impressively designed in-between spaces. Sloping surfaces, empty interiors and curved staircases seem to outnumber spaces with a less transitional character, such as a small, mediocre design museum, some crowded gift shops and occasionally occupied event spaces. Overall, the DDP seem to be a highly instagramable spectacle, without much rationale behind its existence apparent.

This architectural exercise has been conducted at enormous costs. Hundreds of millions of dollars of public funds went into its realisation, and its maintenance costs are said to be exorbitant. While this money could have supported local architects or the city’s SMEs, it covered Hadid’s considerable fees and went straight into the pockets of construction companies affiliated with Samsung, the mega-corporation that already dominates the South-Korean economy. Equally problematic is the DDP’s social impact. Its construction erased a highly symbolic sports complex, which was strongly tied to the city’s modern history and home to a large street vendor community. The displacement of the vendors to the outskirts of the city is probably only the beginning of the wider gentrification processes that the DDP is currently bringing about in Seoul’s Dongdaemun area. Although the complex contains two of the original stadium lights and exhibits on both the archaeological remains and the history of the area, the DDP’s architectural overdose has arguably crushed most of the subtle urban layering of the area.

In return for these financial and social setbacks, Seoul received a major landmark that became instantly famous across the country. While Korean-language hashtags referring to the DDP on twitter and instagram have broken all records, the DDP still has to acquire international fame. Its local popularity is largely the result of the complex’ high-quality public space and architectural features, which could either be interpreted as a refreshing improvement of standards in Dongdaemun or a total denial of the urban context. It does however entice numerous young Koreans in search for a funky place to meet and snap some pictures with their smartphones, but nowhere does it seem to transcend this role. As Jeong Hye Kim wrote on Failed Architecture before, the DDP was built to brand Seoul as a ‘design-capital’, but without a sustained relation with the city’s design community, it remains an empty icon, or a branding tool at best.

Now it’s here, there is no way back. The expertise of Korean architects has been disavowed and the social dynamic and complex history of the Dongdaemun area has been ignored or turned into a museum. The city of Seoul has been saddled with an incredibly expensive foreign object that was futuristic in 2014, and maybe still in 2016, but probably not in 20 years from now. As a toy or a brand, the novelty will wear off quite soon. The only hope for the DDP is probably a serious effort to program its superfluous spaces. Although the local authorities don’t feel like spending much more money on it, the Dongdaemun Design Plaza could, for example, become a real ‘design plaza’ by filling it with a proper institute for contemporary design practices with both local and global connections. Only in this way will Zaha Hadid’s future of 2014 be cherished in the years to come.

add comment
Michael Hathaway
Thanx Rene. Your article respected the iconic Zaha Hadid without becoming lost in the usual froth and bubble that accompanies such articles. Your practical yet inciteful suggestion for making this installation actually useful instead of just being the latest selfie spot really should be pursued by those that hold the purse strings.
Related