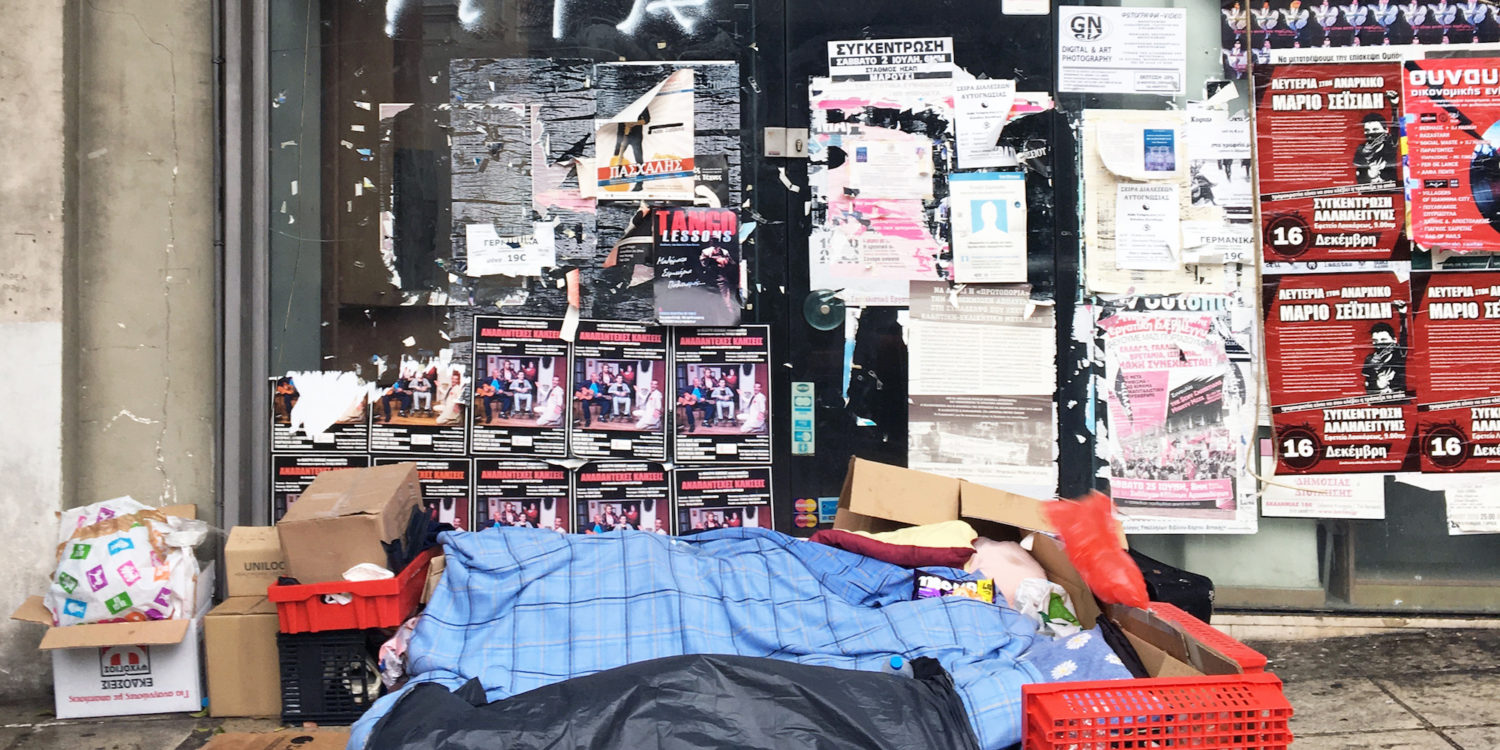 Capturing the metamorphosis of Athens’ storefronts, interior architect and photographer Nancy Katri shows the permanence of the Greek economic crisis.

The economic crisis that started in 2009 is radically transforming the face of Athens. Many streets in the city center of the Greek capital – once lively and busy shopping spots – became sites of vacancies when most of the stores were forced to shut down. With her master’s thesis in Interior Architecture: Research and Design at the Piet Zwart Instituut, Nancy Katri explored and documented the transformation of the Athenian cityscape through a series of photographs of the city’s ground floor. Fascinated by her depiction of Stadiou Street, a paradigmatic case study to trace the effects of the crisis on the physical space of everyday life, Failed Architecture’s Chiara Dorbolò interviewed her to find more about her project, her point of view, and the way she sees the future of her hometown.

What sparked your curiosity about empty windows in the first place?

Despite the fact that I studied Interior Architecture, I was always intrigued by cities and by the public interior. In Athens, when you walk in the center, you pass long distances of vacant shop windows that eventually constitute the façade of the public space. As an interior architect I thought it is quite ironic: the fact that those spaces meant to be open interior spaces, are now only offering to the passer-by their 2D surfaces. That is how the idea of the ‘windows’ came. I saw them as windows ‘in’ and ‘of’ crisis.

Moreover, I have been intrigued by how social, economic and political shifts are “bleeding” into spatial and structural applications, especially those related to the everyday functions – such as commercial places. It was inevitable for me to pay attention to all the details and information that those spaces hold, both aesthetically and conceptually. Those decayed facades full of graffiti, posters, colors, words and many more data constitute the skin of the city. Thus, starting my research, I believed that dealing with the notions of vacancy and emptiness could also set in motion an exploration of spatial structures, especially when viewing it as a reflection of the crisis. 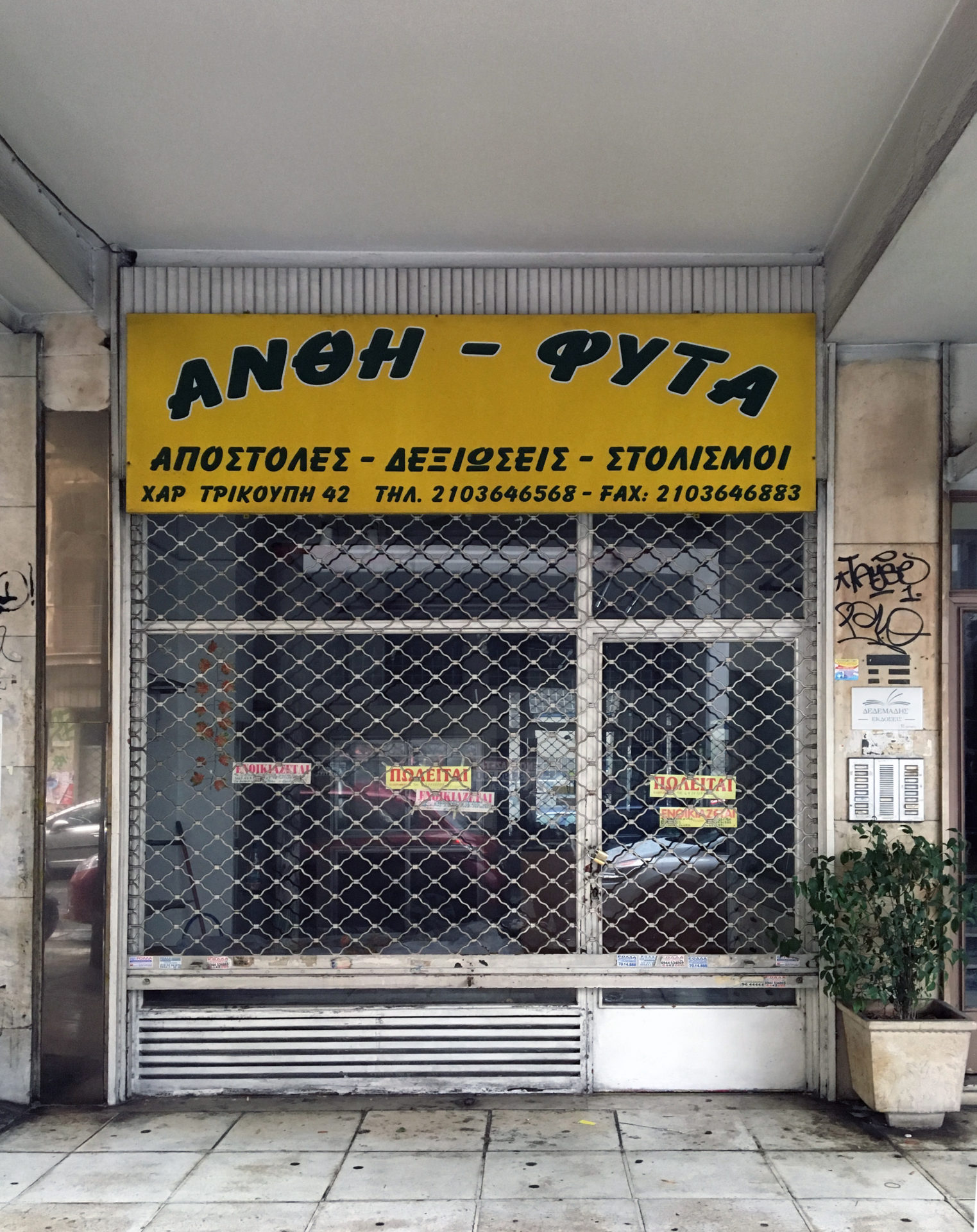 The ground floor windows create a setting, a backdrop for city life. Especially in a Mediterranean city like Athens, they shape the urban experience of millions of people. How did people respond to this radical transformation?

The transformation of the city’s face was indeed very radical but it did not happen from one day to the next; it followed a linear and gradual pace that lasted years. During my research I focused a lot on this transformation. I used images from Google maps to see how things altered. I, myself, was also shocked when I saw images of Stadiou Street taken ten years ago. I couldn’t remember how vivid, colorful and alive the street was, so I believe that people might have not immediately recognised this transformation.

During my research I conducted a number of interviews to examine how Athenians respond to the transformation. Most of them remember the first years of the crisis as a shocking period, the sense of dereliction when well-known shops were closing down one after the other. From the beginning of the crisis, the daily hours of activity started to decrease: now, the city is mainly alive during the working hours, i.e. until 4pm. 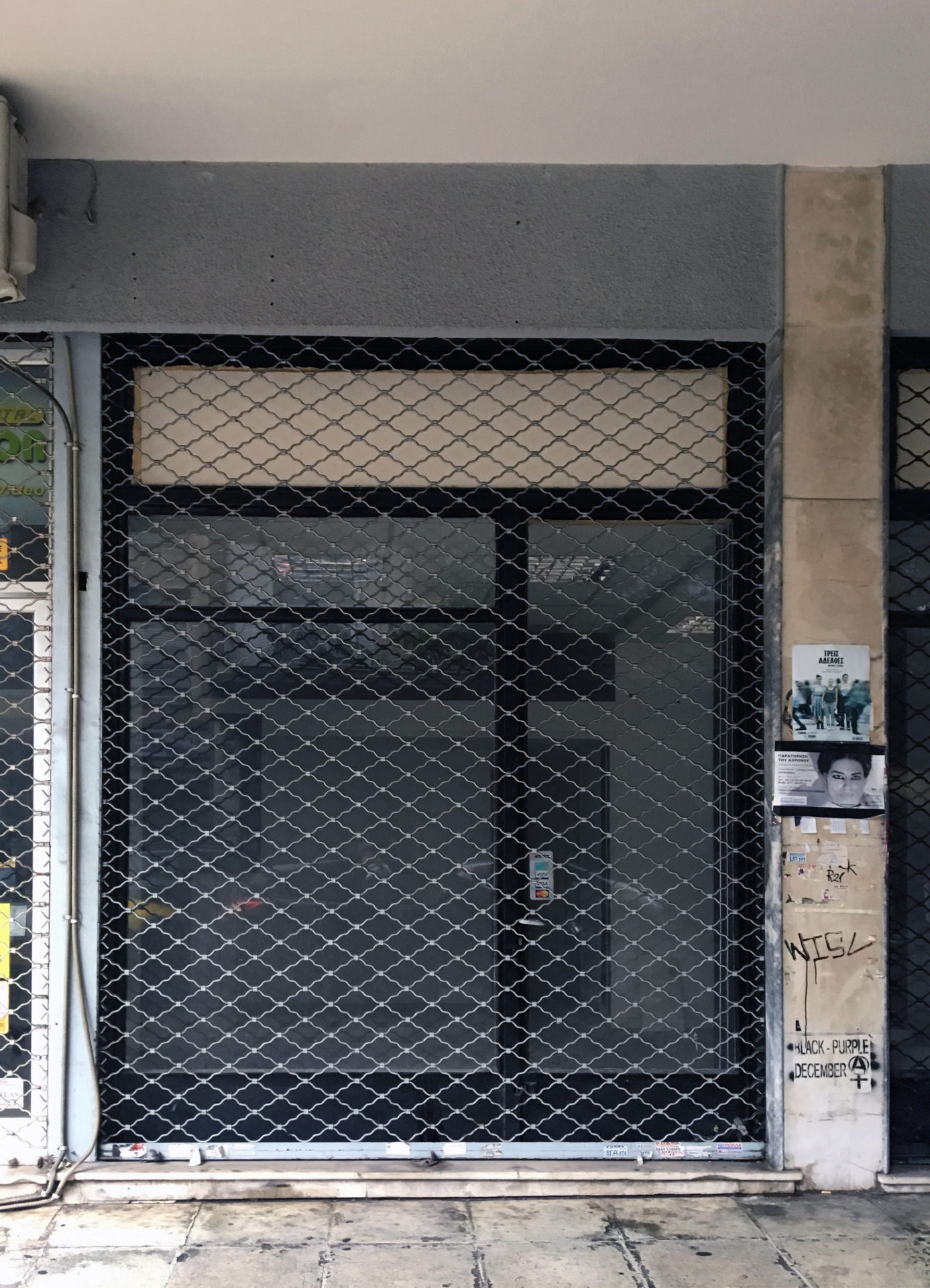 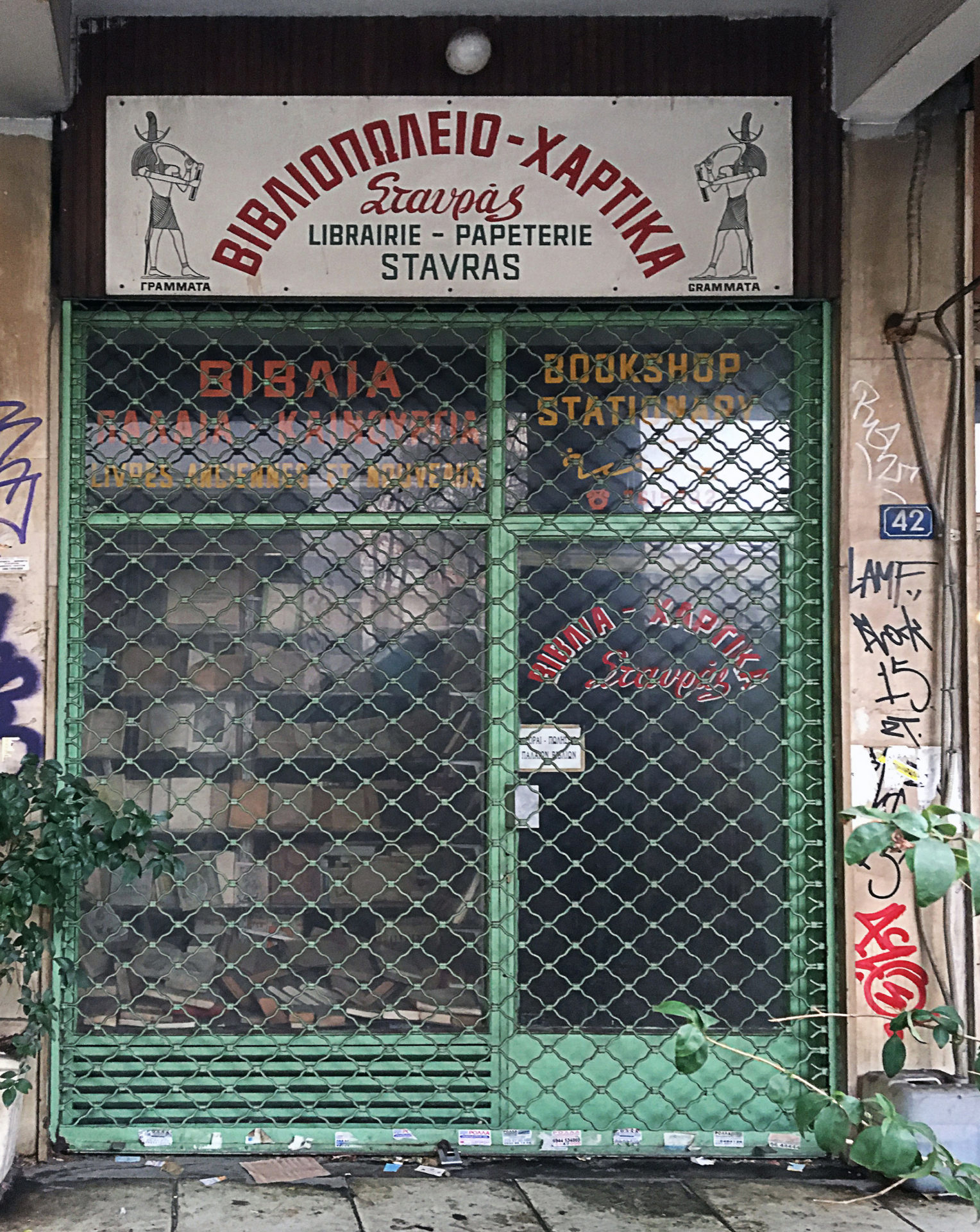 What do you think should be the role of the vacant stores in collective memory?

If we identify memory as always in-the-making, then we should also try to recognize the ways that space is engaged in such a process.

For example, if we think of the primary role of the shop window, it exists only with the commodities it displays as stimulation for consumption. Now that the ‘consumed’ object is gone and the shop closed down, the surface of the window is just ‘mirroring’ the movement of the passers-by. So it is immediately holding a different role.

I really like the symbolism being unfolded; that life still continues despite and within this ‘ruinscape’. Nevertheless, although human nature has the tendency to adjust, the reason memory is important is because it stands at the antipodes of forgetfulness.

I believe that the image of the closed shop windows has already been recorded in the collective memory of society. These past few years, as I walk in the city, I see homeless people sleeping in front of the closed shops. When you notice such a change, you cannot forget it; not only as fact but also as feeling. 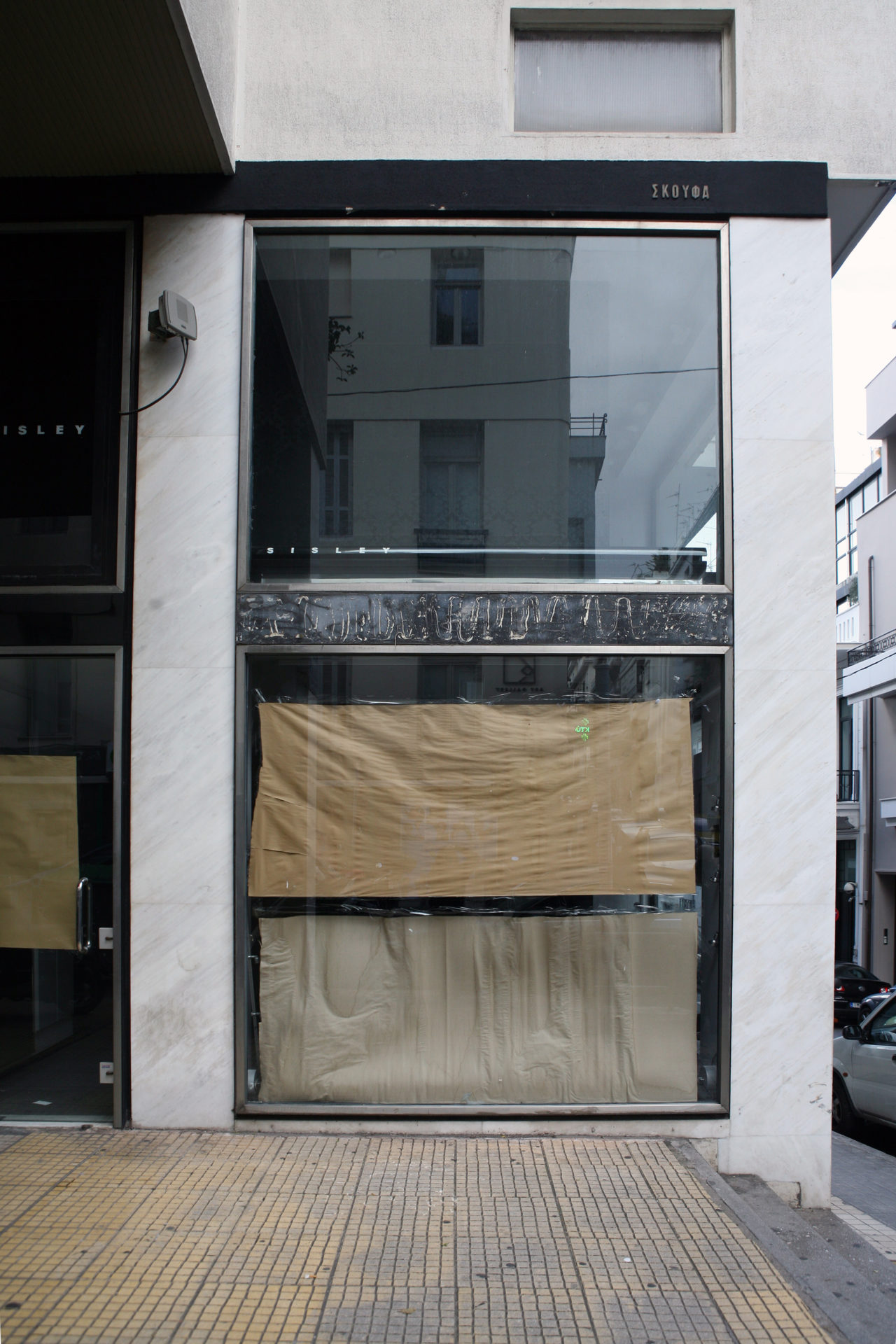 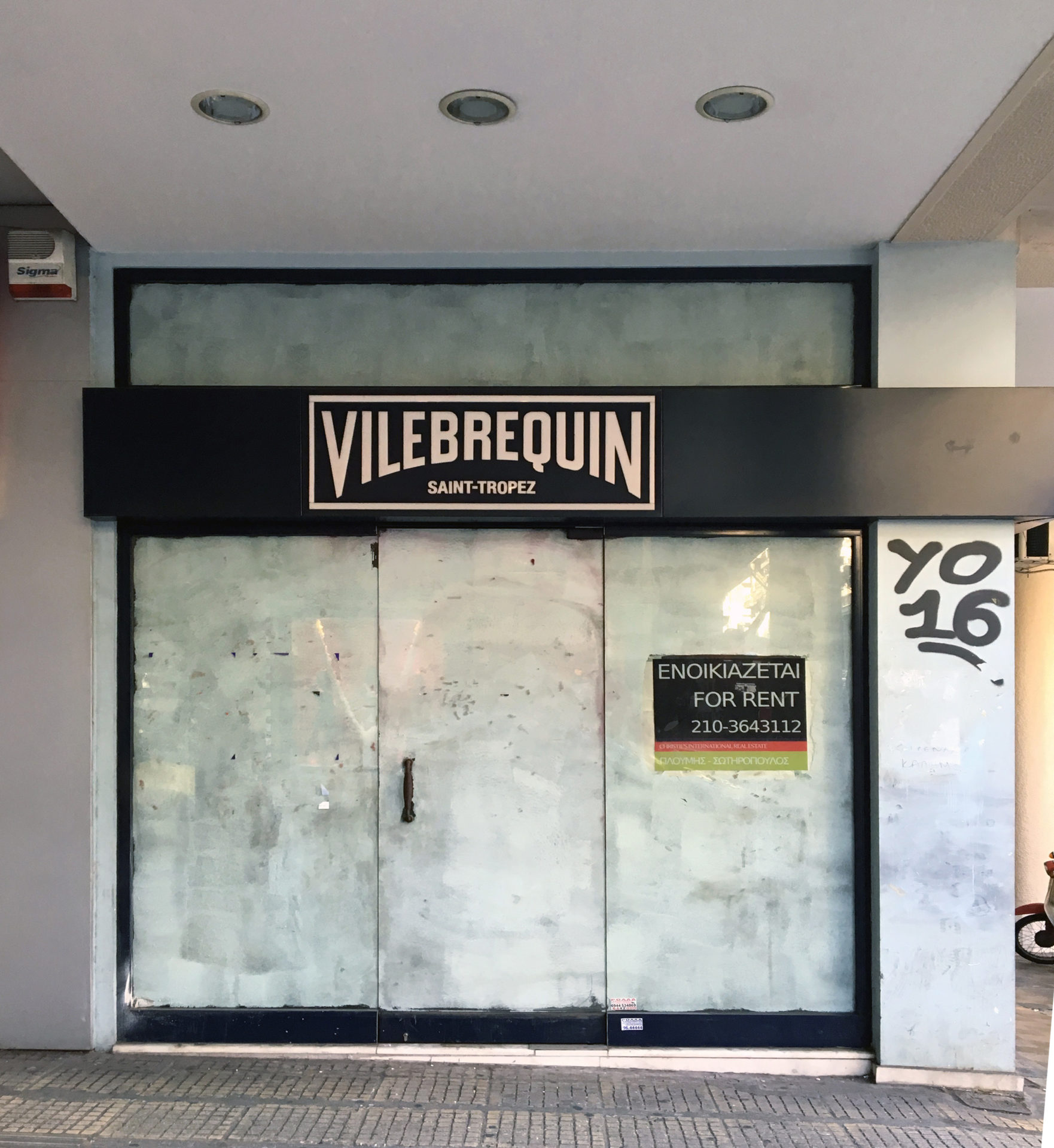 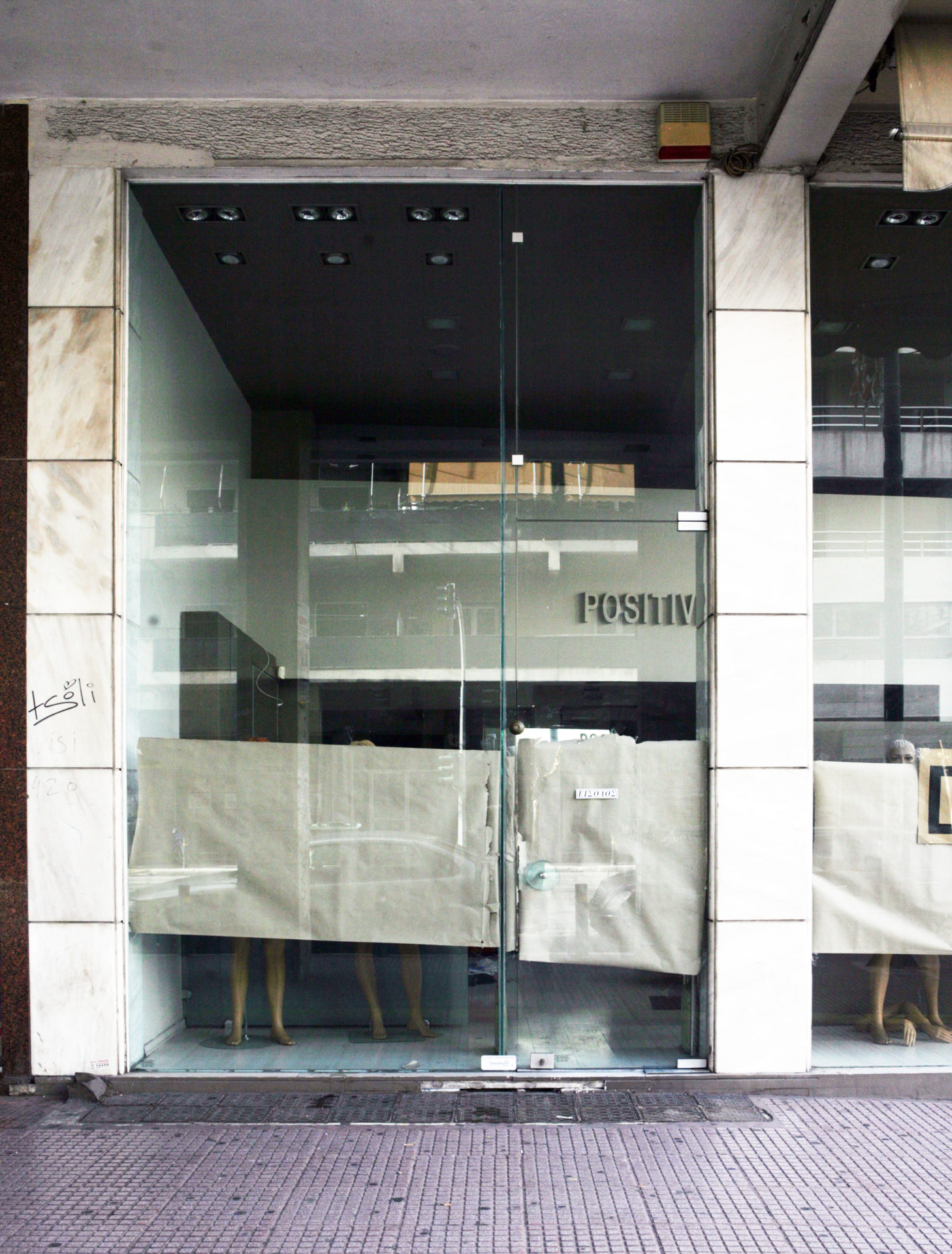 Don’t we incur the risk of fetishization by using the word “ruin”?

I like to use the term ‘new ruin’ or ‘modern ruin’ exactly due to this risk of fetishization. The modern ruins of Athens are as much a stage in which history is taking place as the seat of government, or any newsroom. The example of the vacant shops is a case of ruined sites of a recent past. Decay is not only a natural phenomenon, but also a social condition, and a process that follows an almost linear path.

Of course, the way memory works regarding those spaces and the ancient ruins of Acropolis, for instance, is a totally different process – we are referring to different pasts, durations and values. Nevertheless, the crisis in Greece today feels like a permanent reality. Thus, highlighting the aspect of permanence could be an interesting point of departure, linking both to notions of monumentality, if we think about it in aesthetical terms, and crisis, if we think of it in political terms. 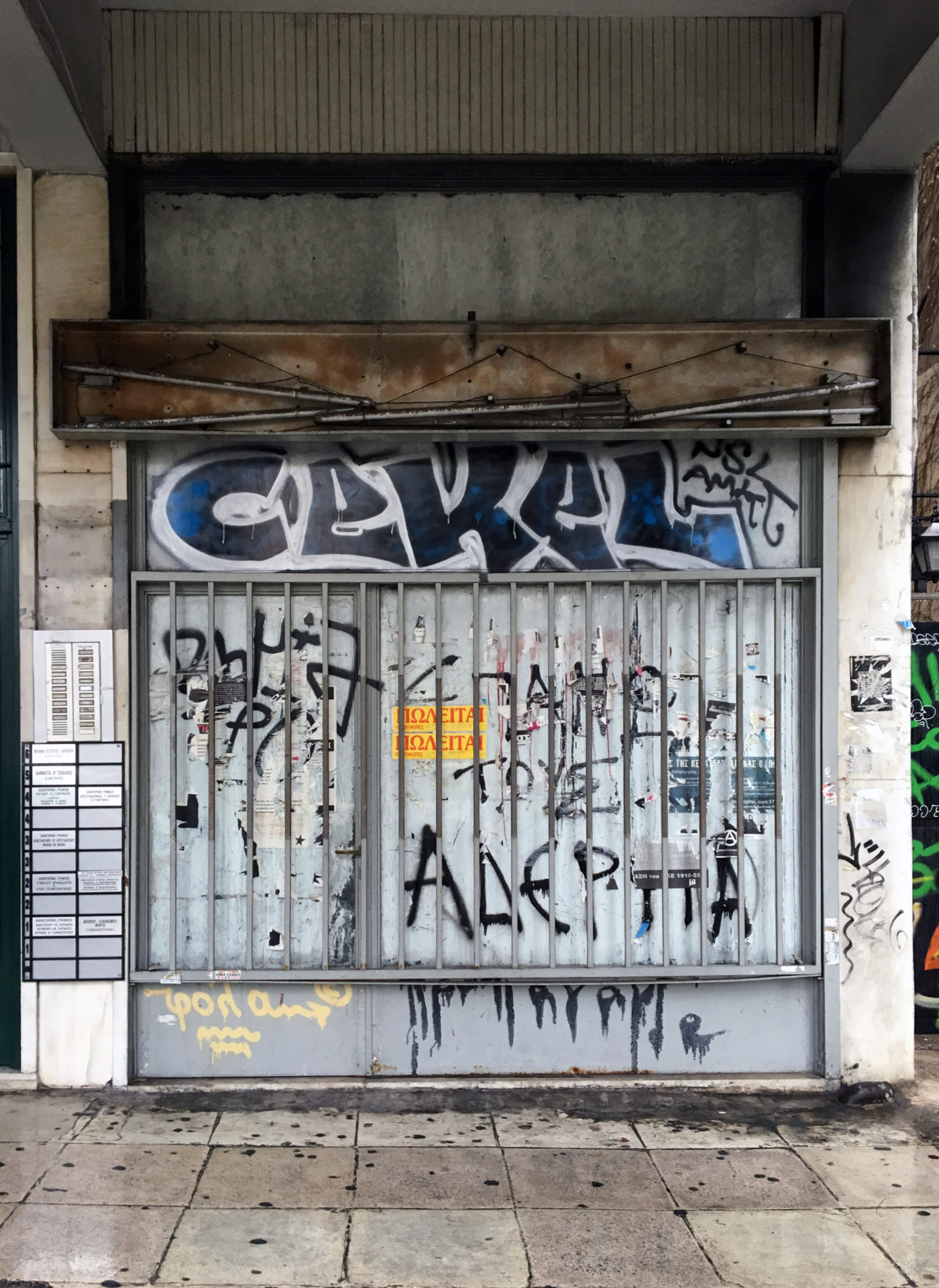 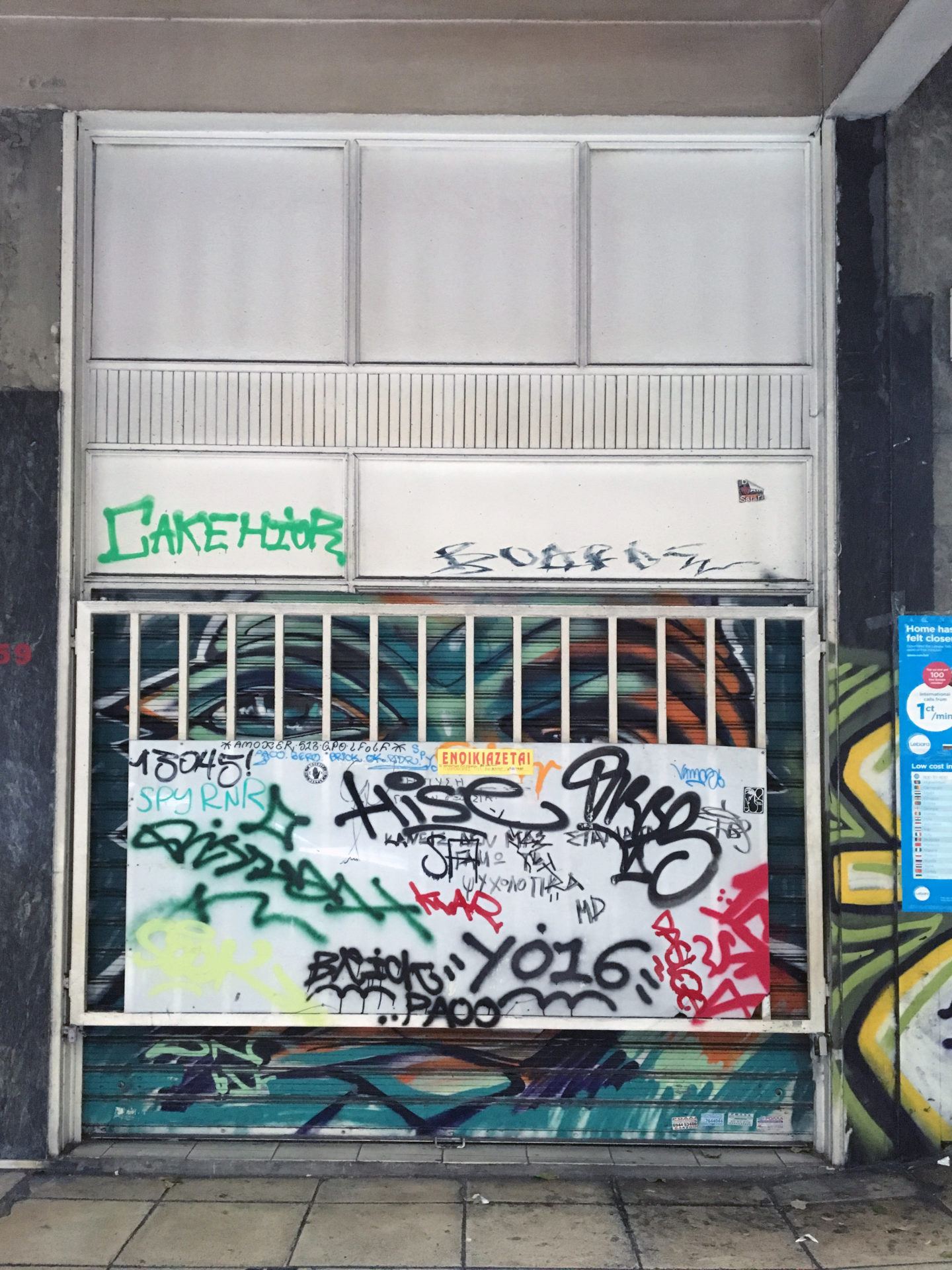 In your research, you stumbled upon a few examples of alternative uses for the empty stores. Do you see this phenomenon happening on a larger scale? Could the economic crisis have started a process that will give the most prominent sites of the city back to its citizens for social and cultural activities?

On one hand, in my thesis I chose not to propose very concrete, fixed ideas but instead presented more speculative proposals of how we could see those spaces. I wanted to treat the phenomenon in a holistic way; seeing those spaces as an extension of public space for instance. I don’t believe that if one shop is used the problem is solved.

On the other hand, I also see much potential, especially since in most cases, streets with closed shops are in the very center. I could imagine them as multifunctional; gathering spaces to meet with people or do a presentation etc. An idea that occurred as I was discussing my thesis with friends was that it would be quite honest if those spaces could be used by immigrants who sell products on the streets, or spaces to sell your own homemade products, or a place to offer a service etc. Of course these are things that need to be elaborated.

Crisis can be a danger, but also an opportunity. Maybe the future can be a mixture of the old and the new. The only sure thing for me is that something better will occur: not despite but because of the pressure we face in economic and social terms. 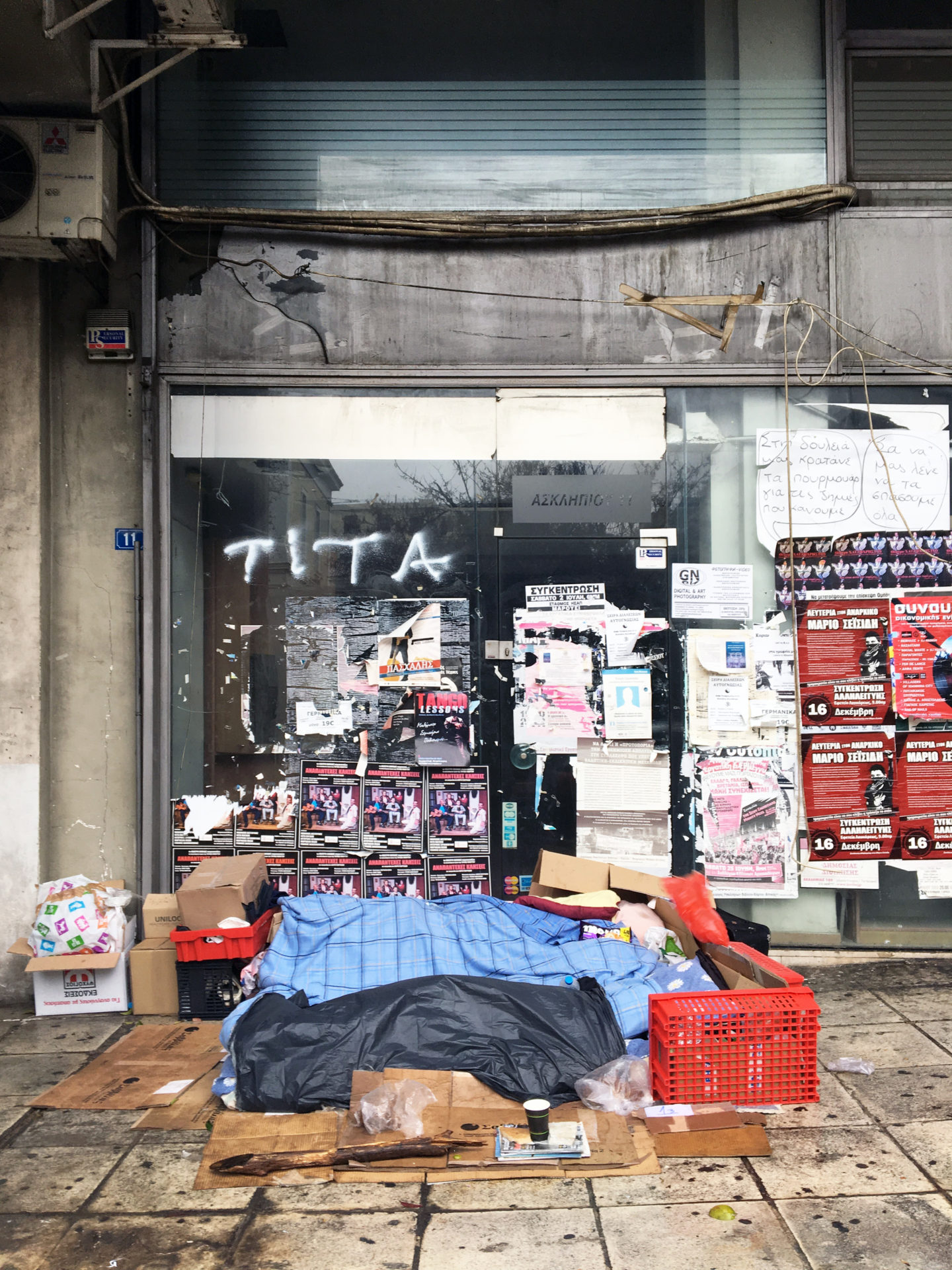 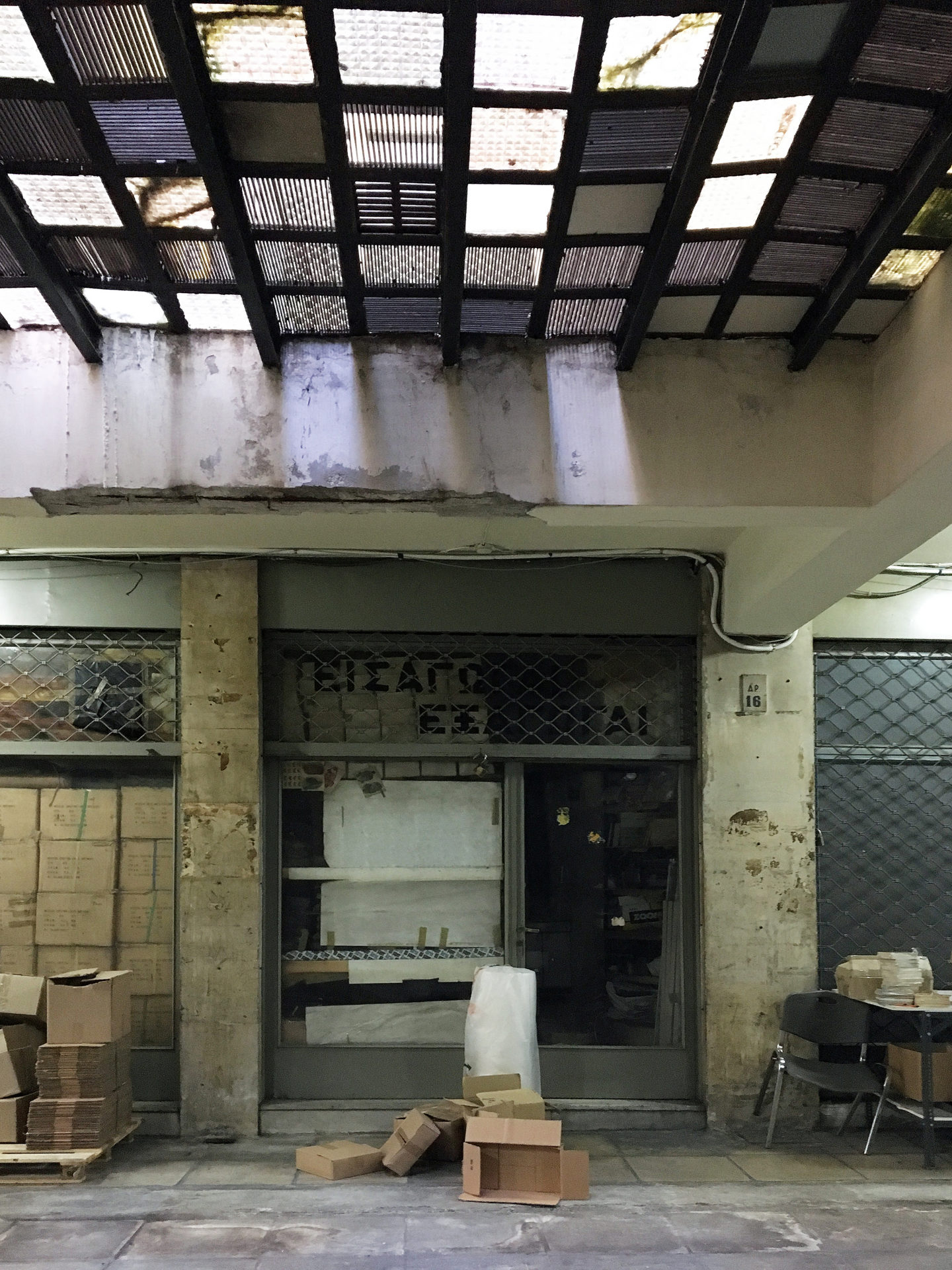 The idea of empty spaces used for new social opportunities is not new to Athens: I’m thinking about the City Plaza Hotel, closed for years because of the crisis and now squatted to be able to welcome migrants from all around the world. Could this be the sort of potential you see in closed shops?

For sure; those spaces can motivate action in many terms. Some have already occurred and a lot will come. Nevertheless, we should consider this kind of action as an effort that mainly happens due to initiatives that do not necessarily have official or legal support. The example of City Plaza Hotel is a result of people’s willpower, work and solidarity.

However, there are governmental actions that are taking place as well. I was very happy to read about ‘polis: shop in the center’ action; an initiative from the Municipality of Athens. The interior spaces of abandoned shops will be given to professionals of the creative field for six months, in order to accommodate some professional activity. This is an example that shows the degree of the potential affordances of those spaces.

Aristide Antonas refers to that exact topic in his book ‘Archipelago of Protocols’, suggesting a speculative system of legal strategies concerning the condition in the current post-crisis scenarios, especially focused on the case of Athens. It is a great reference of how architecture can indicate new ways, and create interesting blurring boundaries between the private and the public, especially in times of crisis. 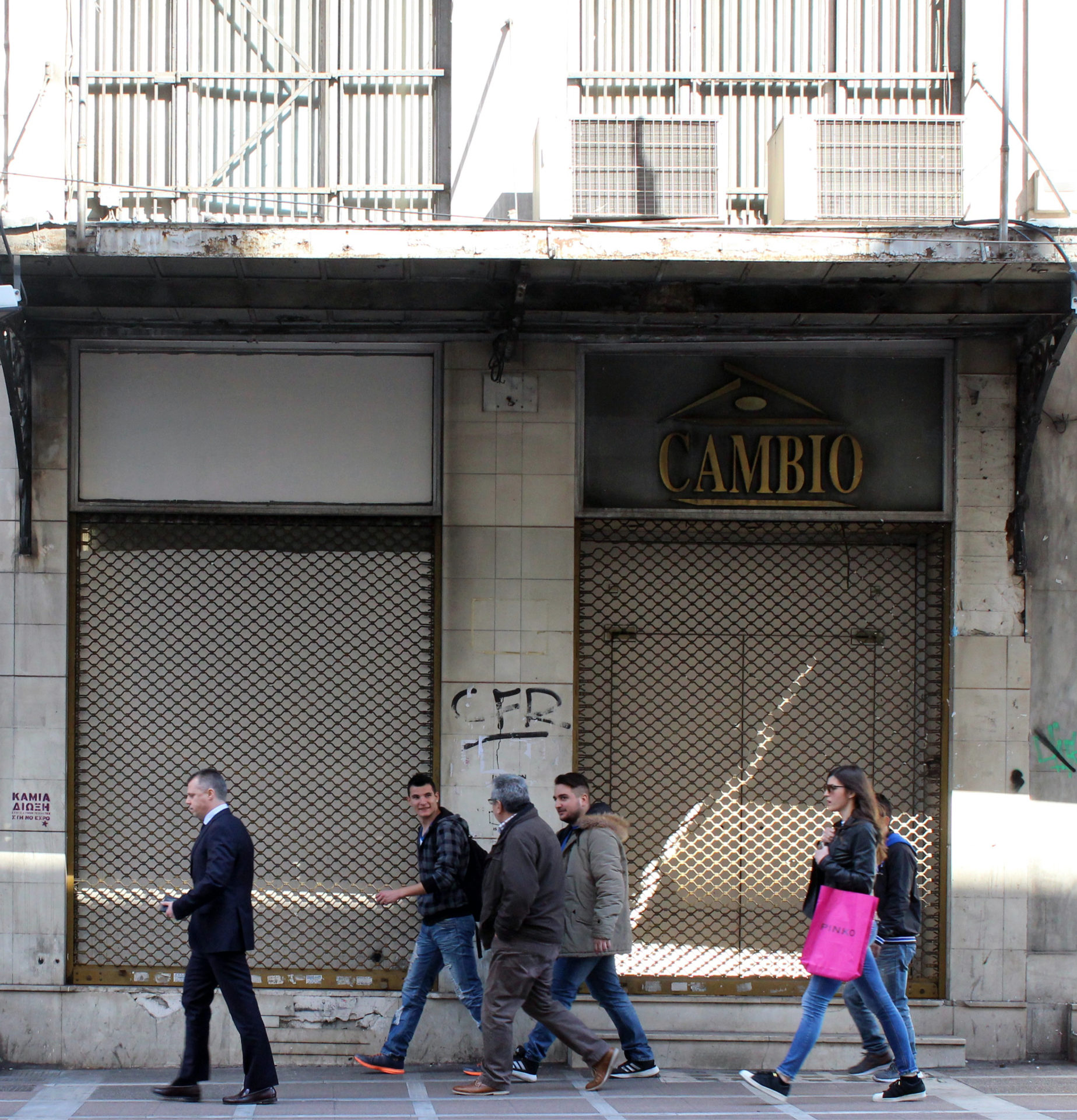 Athens is your hometown but you don’t live there at the moment. Do you want to continue documenting its transformations in the future?

In the ‘Windows in Crisis’ film – which was part of my thesis and was exhibited at Het Nieuwe Instituut as part of the MIARD Graduation Show – I presented the image of Stadiou Street in 2017 and included some images from 2009. I believe that this project could be an ongoing research and I am thinking of how interesting it would be if I could do the same documentation after five or eight years. For example, the last time I visited Athens, four months ago, I noticed that a closed down store which I had photographed is now open again and has a different function. I wouldn’t have noticed that if I hadn’t worked so carefully on those particular spaces. I believe that this research has so many different layers to (re)present, that it will be an ongoing process in my mind and hopefully in practice.

Nancy Katri
Nancy Katri is an interior architect from Athens, living in Rotterdam. After her studies on Interior Architecture and Design at the Technical Education Institute of Athens and ESAD College of Art and Design in Oporto, she moved to the Netherlands in order to attend MIARD, Master of Interior Architecture: Research & Design at the Piet Zwart Instituut. She is currently working as an architectural intern in Amsterdam. Her focus on a multidisciplinary comprehension of design reflects both social and aesthetic aspects.
Chiara Dorbolò
Chiara Dorbolò is an architect and a researcher. She is part of the Failed Architecture team.