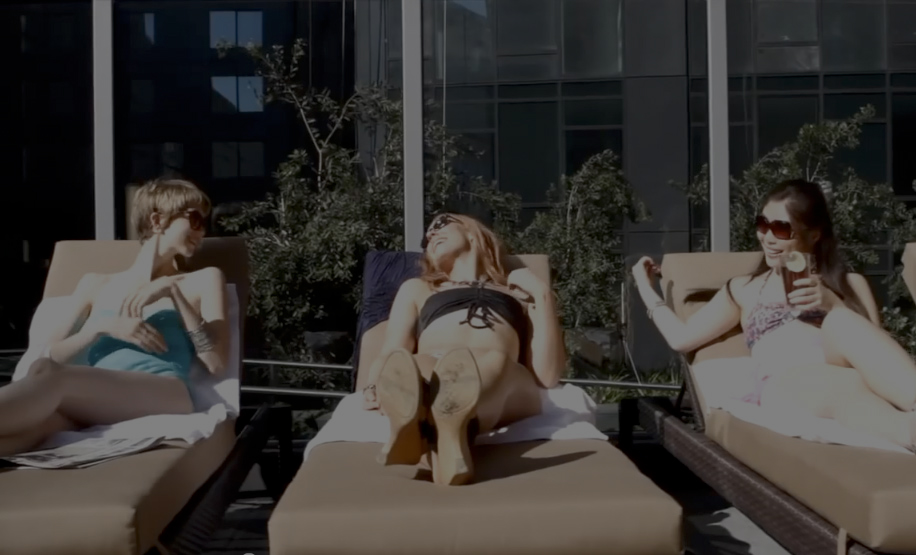 It’s hard not to laugh, or anyway gape, at the promotions for San Francisco’s NEMA residential complex. Located next to Twitter’s Market Street headquarters, NEMA takes its name from ‘New Market’. Its publicity, like its odd name, invites but avoids explanation. It’s reminiscent of work by ‘Froghammer’, the fictional over-the-top PR firm in the Canadian TV series, ‘Slings and Arrows’.

Ponder, for example, the November 21 opening party for the project’s first phase. Hilarious live tweeting by local writer Kevin Montgomery reported an actor ‘dressed as a venus flytrap‘, an actor paid to sit in a bathtub with a glass of wine, and the queasy spectacle of a man in a monkey suit dancing to rap music by 50 Cent. Also, an economically gobsmacked teenage tenant. 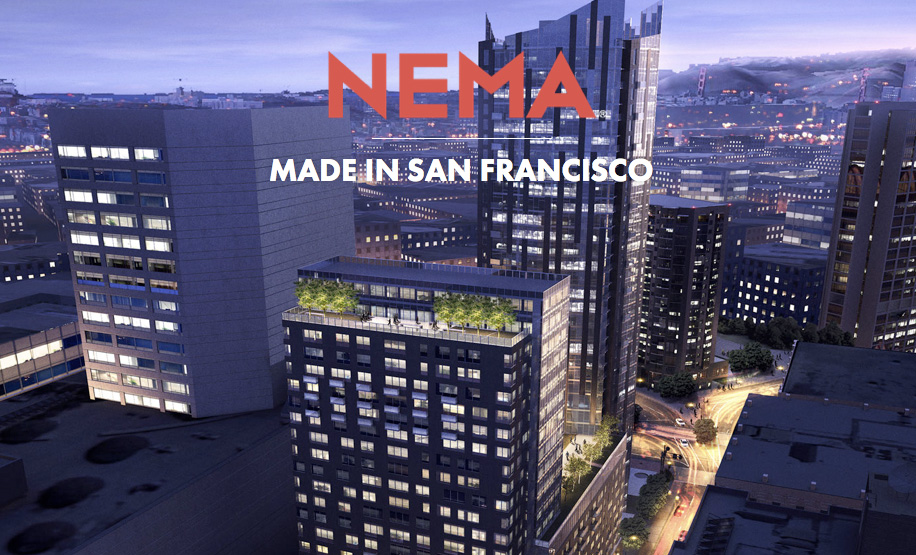 NEMA presents itself as something new: a “highly-amenitized” apartment community in a new neighborhood for the new masters of a new city. Really it’s a straightforward if old-fashioned business: a high-end residential hotel. San Francisco has seen its like before, with apartment suites, expensive staffing, and common areas serving single adults who rarely cook their own dinners. It’s not up there with the grand old palaces in their heydays – not New York’s old Waldorf-Astoria or Plaza, nor San Francisco’s own Palace Hotel. It’s more what residential hotel geographer Paul Groth would call a “midpriced mansion.”

Since residential hotels are barely recovering from skid-row stigma, NEMA’s promoters are wise not to call it one. But, well, look at it. There are some large apartments in the massive complement of 754 units, but then, for example, there’s Unit 608, currently described on the company site as leasing for $2510 per month. It’s a 486-square-foot studio (just over 45 square meters) offering a kitchen with two-burner stove, ensuite bath, washer and dryer. Spartan if not for the pool, clubhouse, concierge service, etc. As always with papering-over, grotesque moments result.

NEMA’s latest promotional video moved one of its own residents to protest in an embarrassed letter to the local SFist Web site, which was picked up on Friday by Atlantic Cities. The offending item is first on the property’s own video page. Titled, ‘A Day In the Life at NEMA’, it depicts willowy actors, almost all light-skinned (although the ‘legal’ text states that ‘models do not reflect racial preference’), enjoying a markedly heterosexual poolside social whirl as if on a cruise ship. This lack of diversity in their promotional videos strongly contrasts with NEMA’s marketing texts, which claim that “NEMA has the San Francisco lifestyle in its DNA – it is an authentic product of its time and place.”

The snobbery isn’t just fluff. A family who qualified for city-mandated “below market rate” housing, at a rent they could afford, were rejected because of a low credit rating even after city officials raised money to help them pay debts. They did get into the building but only after pressure, publicity and, finally, city homelessness official Bevan Dufty’s personal commitment to co-sign (assume liability for) their lease. 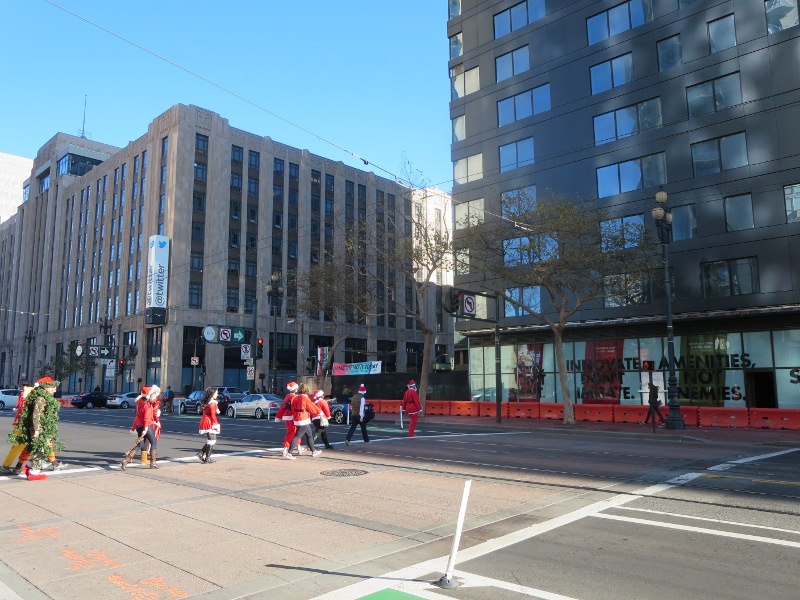 On NEMA’s block, at Tenth and Market, the sidewalks are all hurrying rich and stranded poor. It’s pinched off from the lively if seedy street life east of Ninth by Twitter’s neighboring full block of retail-starved street frontage. Yet there’s no ground-floor retail – or not yet: it’s projected for next year. Currently instead of shops there are scolding billboards: ‘Rent, Don’t Vent. Innovate, Don’t Imitate. Amenities, Not Enemies. Tech Savvy, Not Shabby. Social And Local.’ Another billboard announces: ‘First, not last. Tortoise, not hare. Move, don’t wait. Early, not late. Pre-leasing and happiness this way please.’

In another anti-local localization, the first-released NEMA promotional video uses blocks of text that fail to match their images. This earlier video opens with ‘NEMA IS LOCAL.’ Images of a farmers’ market appear: youthful shoppers, artisan breads, string beans, radishes, overflowing grapes. Except this isn’t the local ‘Heart of the City‘ market, two blocks from NEMA at U.N. Plaza off Eighth Street. A sign reading, ‘Sausalito Larkspur Ferry’ unmasks the imagery. It’s the fancy farmers’ market by the Ferry Building market hall. Nice place where a stockbroker or tourist can pick up an artisan loaf en-route to the boat for Marin County. NEMA is two miles inland from there.

Also in that video: ‘NEMA IS POP-UPS’ features a nitrogen-churned ice cream stand in a high-concept container complex almost half a mile away. ‘NEMA IS AUTHENTIC’ shows the same area. ‘NEMA IS GREEN’ features, not nearby Civic Center Park with its homeless sleepers, but leafier Yerba Buena Gardens, a mid-century ‘urban renewal’ site over beyond Fourth Street. Another curious re-interpretation of everyday San Francisco is the relabeling of the iconic Castro District gay area under its older, pre-counterculture name of “Eureka Valley.” Far from being ‘LOCAL’ and ‘AUTHENTIC’, NEMA’s images promise the future genericization of our western downtown, viewing it as unpresentable until properly genericked.

And yet, NEMA and its customers aren’t Tom Wolfe’s insulated urban ‘Masters of the Universe‘. Really they’re in a long tradition of parvenus looking for love in the big city. SF Chronicle writer Carolyn Said’s profiles of new renters depict upper-middle-class aspirational breathlessness, not relaxed patrician dignity. There are telling moments in the videos too. The fitness center’s designer says there will be exercise machines ‘that maybe you haven’t seen before but we’re looking forward to showing you how to use them.’ And those ‘Day in the Life’ actors are miming innocent wonder, not haughty expectation.

Really, what’s on offer here is guidance and company for lonely, newly urbanized young people who have new money and little time to learn to spend it. NEMA tells them they can become confident in the use of luxuries that at first are not familiar. Luxuries that, secretly, they may not feel that they deserve.

Martha Bridegam
Martha Bridegam lives in San Francisco, works as a lawyer and writes about housing, homelessness, public space, detention and the politics of geography.