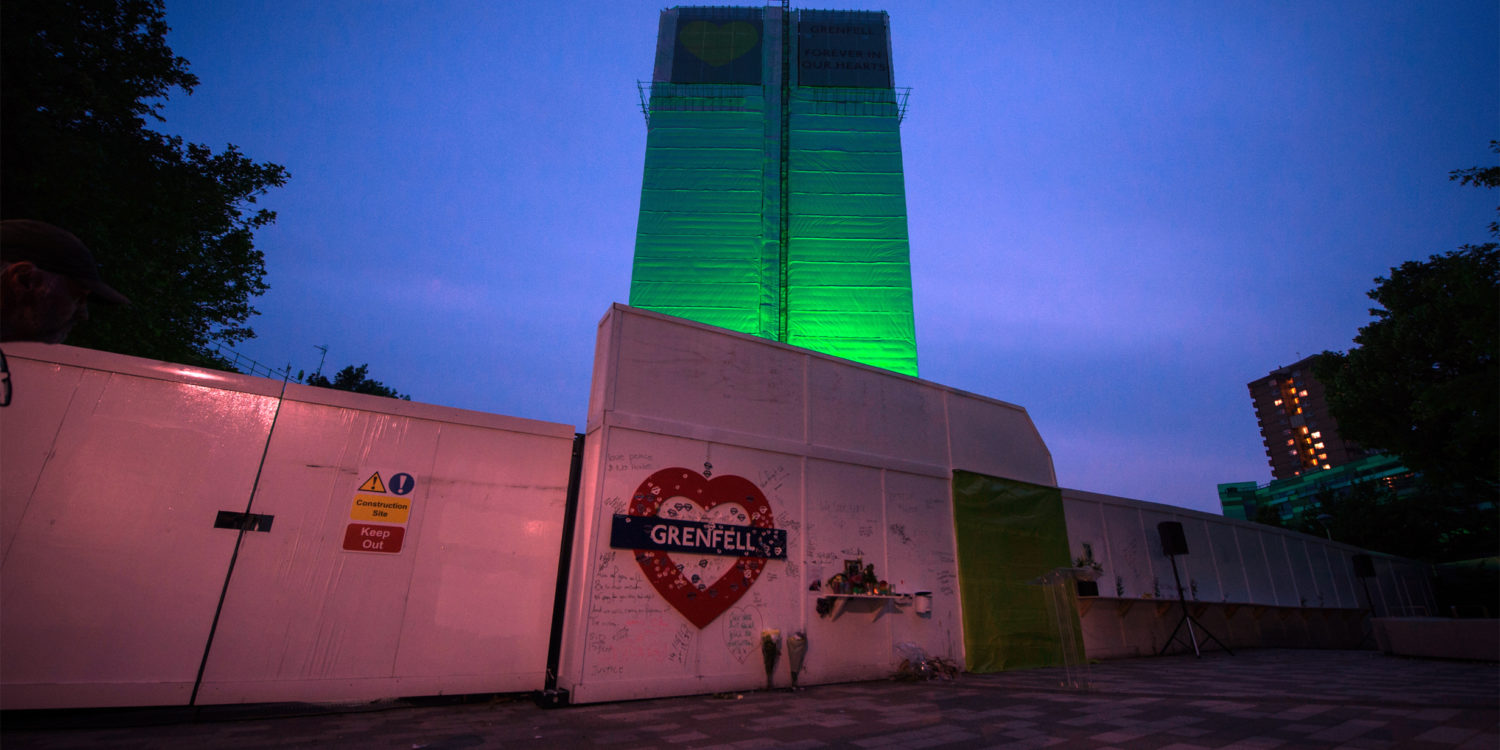 On December 12th, the British people have an opportunity to break with the catastrophic economic doctrine which claimed the lives of 72 people in the Grenfell Tower disaster.

In the early hours of Wednesday 14 June 2017, a fire broke out at the Grenfell Tower apartment block on a housing estate in the West London borough of Kensington and Chelsea. Starting from a malfunctioning freezer, the blaze quickly spread across the building due to a combination of flammable external insulation and combustible cladding on the building’s facade. It eventually claimed the lives of 72 people.

The Grenfell fire and its aftermath seemed to capture in one tragic moment the country’s various deep, underlying issues, which had already been exposed bit by bit during the course of the general election campaign that had concluded the week before.

Now, two and a half years later, despite the country’s evident need for a radical transformation, in housing and in society at large, it feels like things haven’t changed at all: the country is now in the midst of another general election (thanks to the parliamentary deadlock created by the last one) and, as a recent fire in a block of student flats has shown, it has barely begun to reckon with the underlying causes of the fire.

Before we get to that, it’s worth revisiting this 2017 campaign, because, despite its inconclusive result, it offers a glimmer of hope for the kind of radical change needed to address the problems which caused the Grenfell Fire.

Framed initially as an election about Brexit and about the inevitable return of a “strong and stable” Conservative government, the narrative rapidly changed in the ensuing weeks. Seven years of austerity had by then taken their toll on the country and, in turn, much of the British public. It was this austerity-fatigue which in turn prepared the ground for the opposition Labour Party’s manifesto, by far the most radically progressive programme from a major British political party in decades. The widespread enthusiasm generated by this manifesto made clear that the public were concerned about things besides Britain’s relationship with the European Union: like the huge increase in the use of food banks, NHS waiting lists, exorbitant utility bills, crumbling transport and housing infrastructure and rising inequality.

The salience of these last two points, in particular, was brought to the fore by the Grenfell Fire.

Grenfell was a solid block of social housing that had been built back in the 1970s, at the tail end of the postwar era of mass state-sponsored housebuilding. The neighbourhood of North Kensington in which the tower is situated is one of the most unequal in the country. Here, social housing sits right next to brand new blocks of luxury apartments that sell for millions. It’s an almost perfect symbol of the ever widening divide between rich and poor in Britain today.

Over several decades, the tower had been seriously under-maintained by the local municipality and subsequently Kensington and Chelsea Tenant Management Organisation (KCTMO), the “arms-length management organisation” set up to maintain it. For several years leading up to the fire, a blog run by Grenfell Action Group (composed of residents of the tower) had been warning of major safety problems, only to be met with legal action by the municipality for defamation and harassment. As this behaviour suggests, the Conservative-led local government cared little for these particular constituents. After all, they were occupying highly valuable land and weren’t going to vote Conservative anyway.

This lack of concern was itself summed up by the cladding that caused the fire. The likely reason it covered the building in the first place was to prettify a brutalist façade which was deemed unsightly for the residents living in the new luxury apartments. In an article written shortly after the fire, Guardian journalist Aditya Chakrabortty speculated that it would have cost a mere £2 extra per square metre to purchase a non-flammable alternative. This is how much the municipality valued the lives of the Grenfell residents. 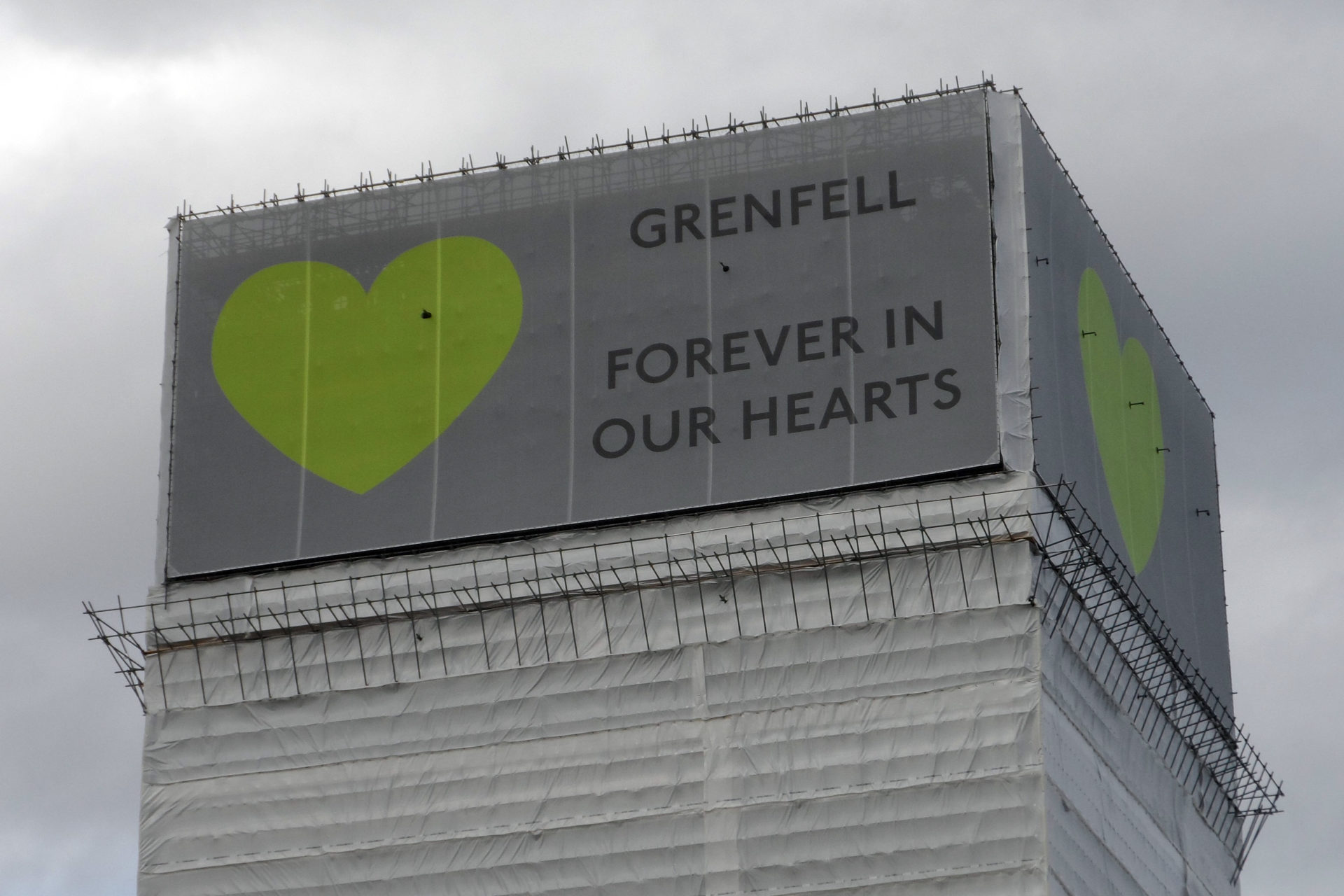 Top of Grenfell Tower a few days after the one-year anniversary.

Like the Kensington and Chelsea municipal administration, the national Conservative Party, led by Prime Minister Theresa May, had treated the British public with contempt throughout the prior general election campaign, barely engaging with ordinary people other than through a succession of highly stage-managed events. May’s own pathetic response after Grenfell, in which she was slow to meet any of the victims and only did so behind closed doors, was redolent of her behaviour during the campaign, in which she seemed incapable of expressing warmth or empathy with people she encountered.

Meanwhile, the opposition Labour Party leader Jeremy Corbyn didn’t hesitate to visit the Grenfell site and console those affected, further disproving the image created of him by a near universally hostile media establishment, which had characterised him as some kind of easily irritated, out of touch, socialist throwback. Emerging from the radical left of the Labour Party, Corbyn had led an insurgent movement which came close to winning the election, despite starting the campaign over 20 points behind in the polls. At Grenfell, we saw in stark detail how long it had been since a leading politician had so resolutely cared about the harsh reality of life for Britain’s poor.

That the causes of the fire have yet to be addressed is confirmed by recent news of another fire, this time at a student apartment block in Bolton. In this instance, thankfully no one died, but it was only the most recent of a succession of (albeit less severe) apartment block fires that have occurred in the UK since Grenfell. As a recent article by Luke Barratt for The Guardian highlighted, 2019 alone has seen at least five major fires in apartment blocks like Grenfell. Barratt attributed the frequency to the government’s glacial response to fire safety since the Grenfell disaster.

The inquiry into the Grenfell Fire has been divided into two stages, dealing first with the immediate events surrounding the fire and then with the actual causes of the fire. Unsurprisingly, the first report devoted much of the criticism to the fire brigade, without addressing any of the wider conditions which impacted their ability to respond effectively. The second report may not be published for another two or three years. Which means that a proper discussion of the systemic issues which caused the fire, may only take place five years after it happened, by which time, there will likely have been another deadly fire.

Overall, it’s difficult not to conclude that the problem is systemic. Successive UK governments have allowed the country’s housing stock (and much of the rest of the country’s infrastructure) to become increasingly dilapidated. At the same time, they have pursued policies which have progressively deregulated and privatised the housing market. As a result British people (especially its younger generations) are overwhelmingly at the mercy of private landlords, living in housing that remains the oldest housing in Europe, frequently damp, poorly insulated and generally a risk to people’s health.

In a recent column for The Guardian, Olly Wainwright spells out the choice facing the British people at the forthcoming election: “continuing the status quo, with a million families on social housing waiting lists while landlords reap ever-higher profits; or a fundamental shift towards imagining a time when affordable, good quality shelter is accepted as a basic human right for all.”

This is why the election on 12th December is so important, and not just for the UK. If the British people vote for Labour and against the status quo, they will show the world that here, in one of the first places where this extreme free-market logic took firm root, there is an alternative.

The second half of the title is taken from a tweet by right-wing journalist Iain Martin, complaining about Labour’s policy on universal free fibre-optic broadband.

Header image courtesy of the Catholic Church of England and Wales/Flickr.

#05 London Undone: Gaika and Ash Sarkar Discuss the City’s Past, Present and Future

How the British Buried Their Imperial History Along with Wembley Stadium