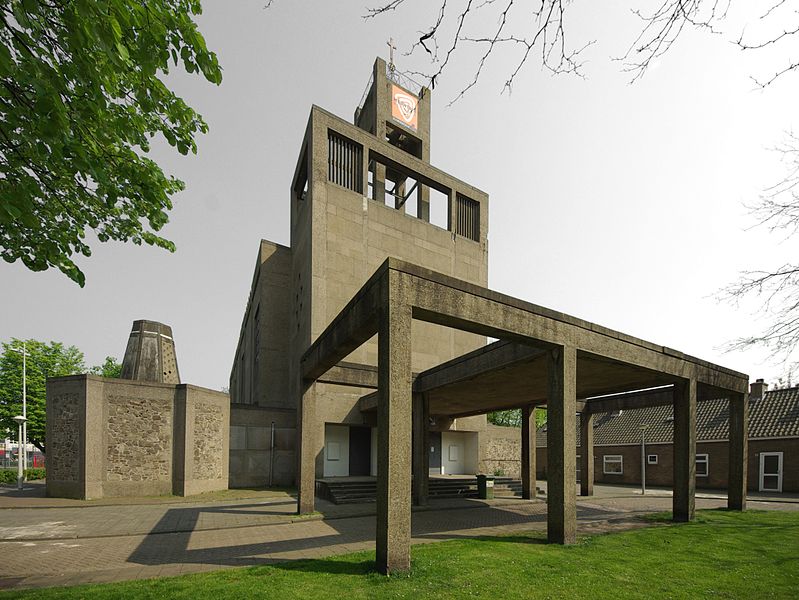 In the last few months groups of refugees have been campaigning to attract attention to their precarious position.

In the last few months groups of refugees have been campaigning to attract attention to their precarious position. Currently their applications for asylum in the Netherlands have been rejected, but they are unable to return to their country of origin for various reasons. The most important tool of their struggle has been the creation of a permanent presence in public space, which has resulted in the expansion of the architectural typologies related to the spatiality of migration. Currently they do not only consist of almost invisible structures, but also of a highly visible presence in the urban fabric. 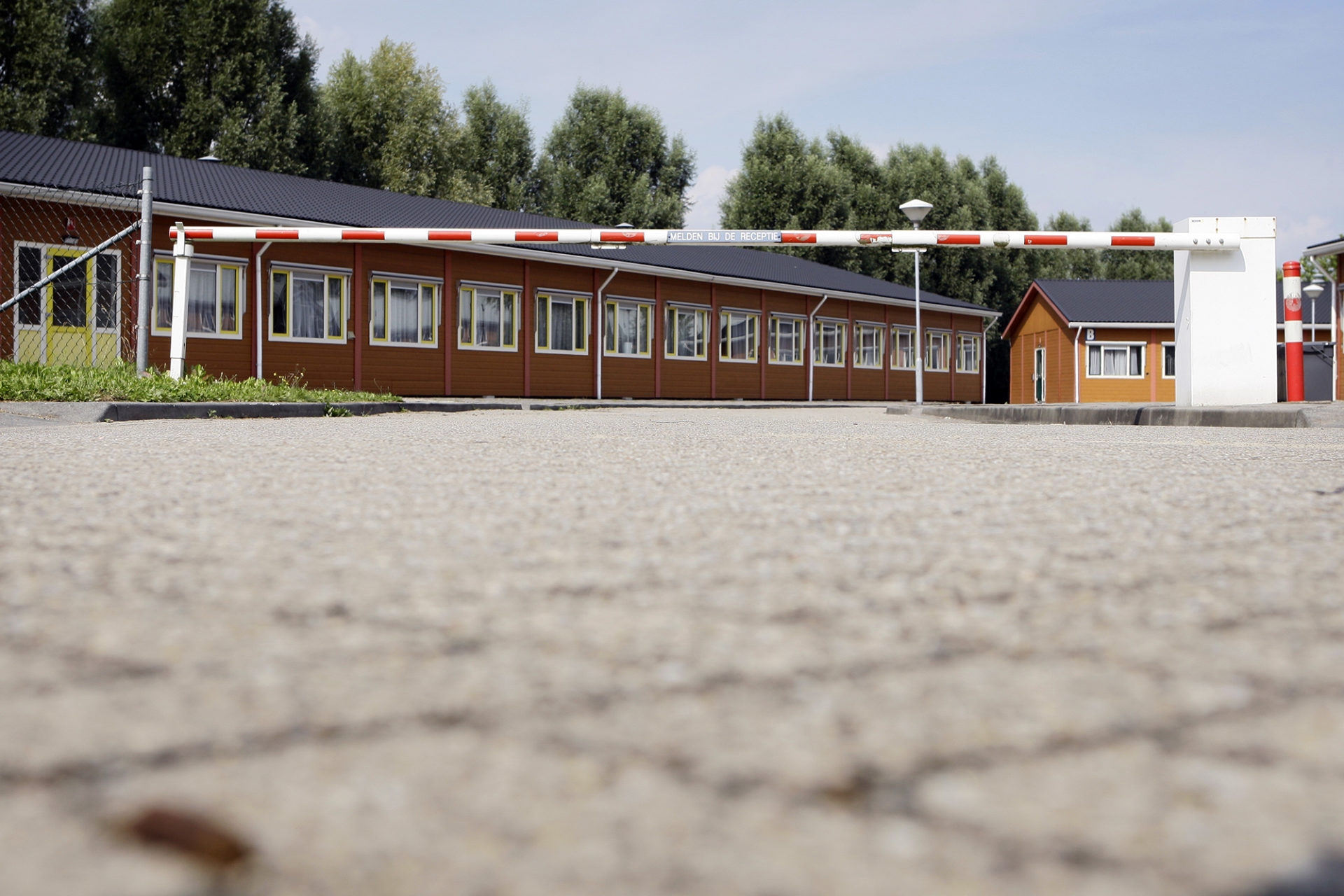 In the last ten years every year an average of about 15 thousand refugees arrived in the Netherlands. Although some of them have been granted permission to stay, many are rejected and encouraged to leave voluntarily or are otherwise forcibly deported. This continuous process is facilitated by an architecture whose invisibility ensures that the politically sensitive issue of migration and forced expulsions are kept out of the public eye. New arrivals are in general received in a ‘asielzoekerscentrum’ (center for asylum seekers), which often consist of a scattering of soulless barracks, outside small villages in remote areas. As these centers are often hard to reach by public transport, the refugees tend to limit their movement to some adjacent villages within walking or cycling distance. The tens of thousands of refugees residing in the Netherlands and waiting for a decision on their application consequently remain an almost hidden phenomenon.
However, when an application for asylum has been rejected and the refugee in question does not leave voluntarily within a certain period, he or she is ‘illegalized’ and often imprisoned in specific jails. Almost all of these jails are located on boats, docked next to remote business parks. The refugees are now totally hidden, as they can not appear in public anymore and are kept in structures which are not visible from any publicly accessible place, unless one enters a specific dead-end canal with a private boat. The fact that the illegalized refugees no longer find themselves on Dutch soil only adds to the symbolism of their isolation. 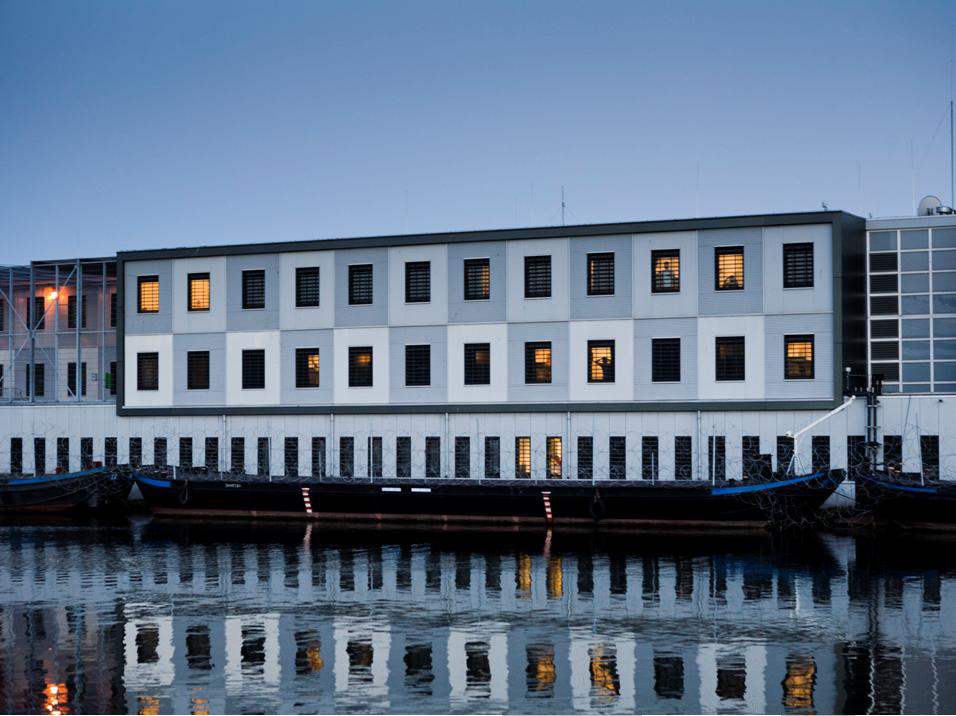 It is often impossible to deport the refugees imprisoned on the ‘bajesboten’ (jail boats), as the exact country of origin can be unclear, or a country of origin refuses to let them return. Therefore many refugees are released after months of imprisonment, after which they often live on the streets. In the last few months several of those refugees have started a campaign to attract attention to their precarious ‘in-between’ situations and demand the reopening of their cases. Most interestingly, they do this not only by organizing protests of only a few hours in city centers, by creating a permanent, visible presence in public space. As this requires a shelter from the harsh Dutch weather conditions, a very specific architecture has come into existence.
Their first long-term activity was a tent encampment in the Amsterdam suburb of Osdorp, which consisted of a scattering of colourful tents on a semi-public space, surrounded by banners. The structure of the camp contrasted considerably with the surrounding large-scale, functional architecture of the 60s and 70s. Although the camp was located on a rather meaningless place, its obvious, unusual and ongoing presence made sure it was constantly visible on the streets, in social media and in the (national) press. While this could be considered a success for the refugees, they were suffering from the cold and wet weather conditions and diseases spread easily among the inhabitants of the camp. 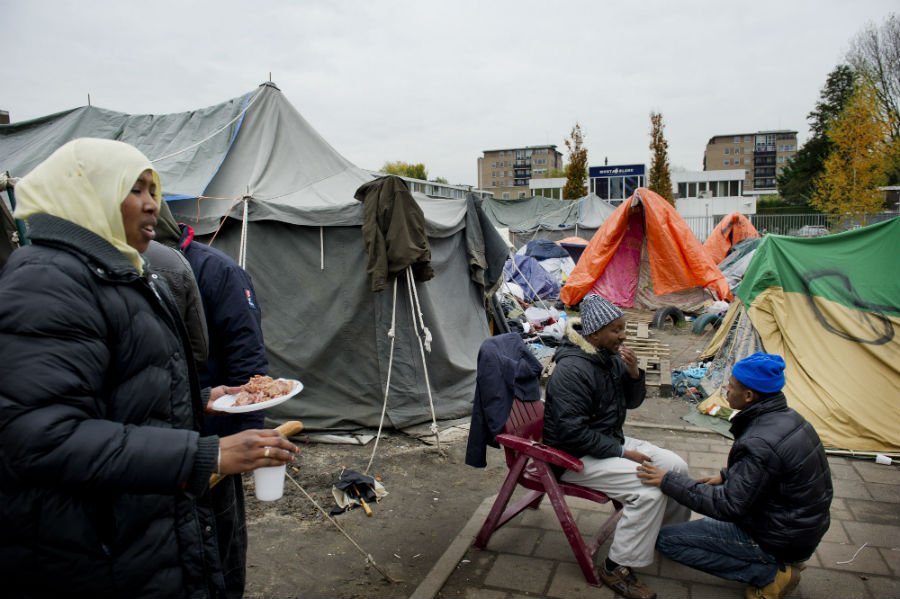 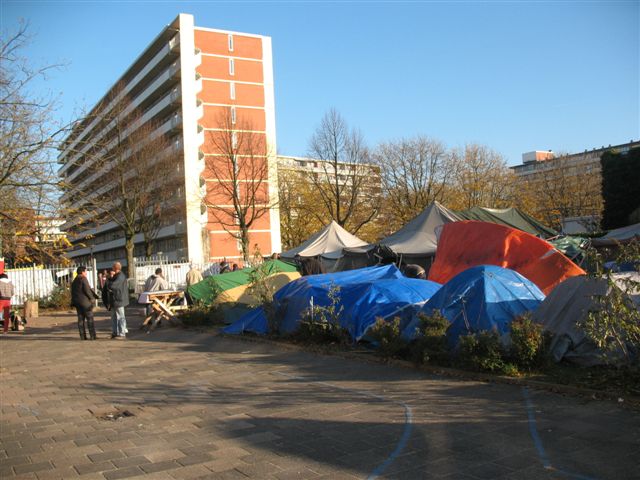 Late November the mayor of Amsterdam instructed riot police to evict the camp ‘for health and safety reasons’ and all the refugees were arrested. They were released the same night however, on the other side of town, in the rain and without money or transport possibilities. The Vondelbunker, a cold-war era nuclear bunker, which is currently a cultural center, offered them refuge for the night. Although the Vondelbunker is a totally hidden place, their presence here was widely reported, mainly due the symbolism of their stay in a structure that was originally made to protect the mayor of Amsterdam, but now used to counteract his attempt to break up the refugees’ protest and make them disappear in the night.
As this space was unsuitable to host more than hundred people on the long term, the refugees, various support groups and the Amsterdam squatting movement started to plan a new phase of their struggle. Two days later they occupied the St. Joseph church in the western part of Amsterdam, a highly iconic brutalist building from the 50s, made entirely from concrete and listed in the top-100 national heritage sites. Just like the tent encampment the St. Joseph church is not that centrally located, but again the act of occupation problematizes their presence in the urban fabric. This resulted in a constant flow of media attention since the first day of the occupation and consequently in a renewed public discussion of their status. Besides, their presence in the city and in the media has not only led supporters to provide them with a constant supply of food and clothes, but also with various grass-root architectural interventions, as for example the conversion of the side aisles into dormitories in two days time .
After two weeks the Vluchtkerk, as it is now being called, has appeared to be a more or less decent shelter for the winter as well as a functional platform to continue their struggle. It is important however to emphasize the still substandard living conditions and the temporary character of the solution (the owner will reclaim the building in April). The creative, architectural element of their struggle was key to the first successes of their movement, as it made them highly visible and a ‘trending topic’ in national media. However, the spatial consequences of the processes of migration in The Netherlands are still in dire need of more sustainable architectural solutions.

Outside view of the church 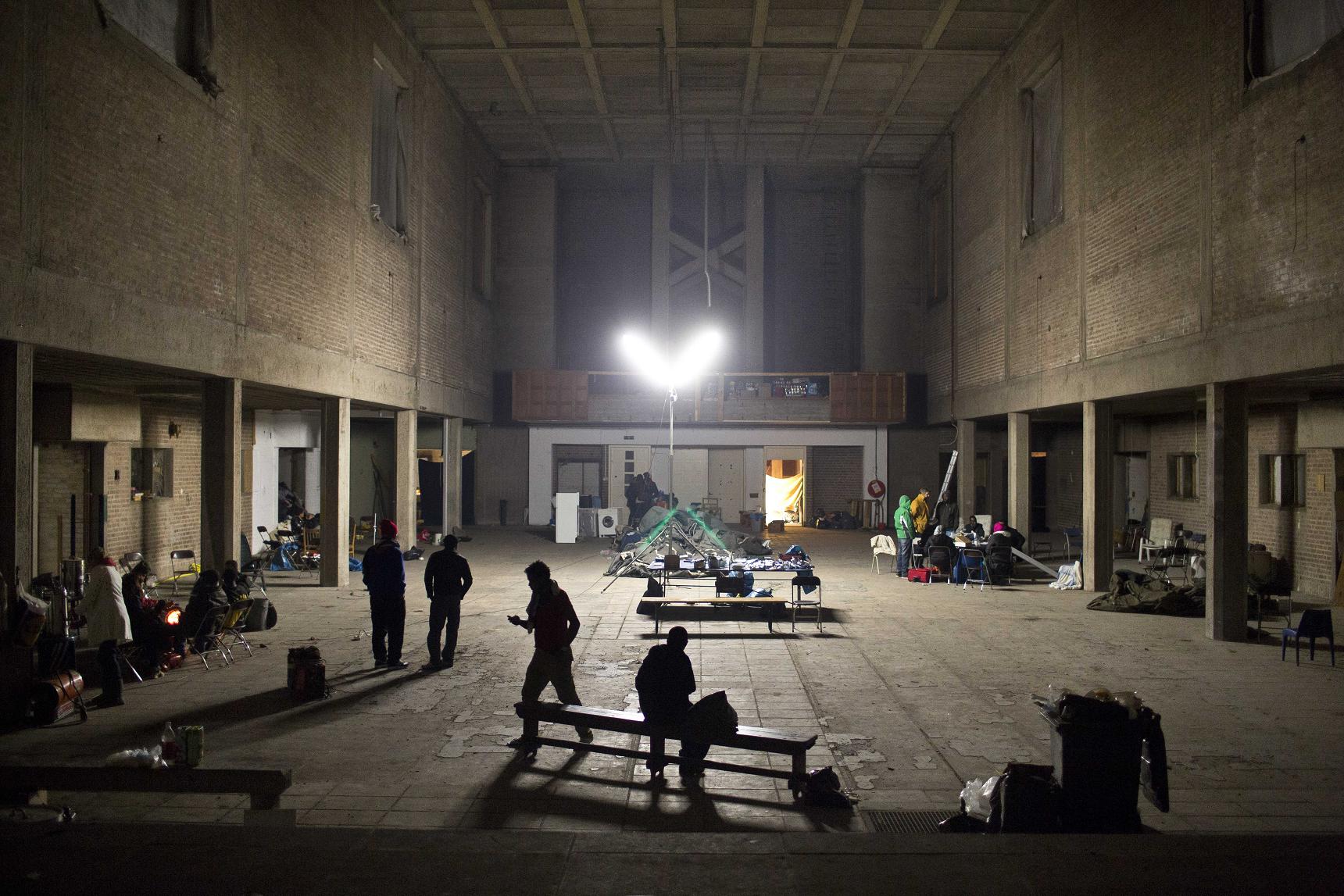 Interior view of the church; first day of the occupation 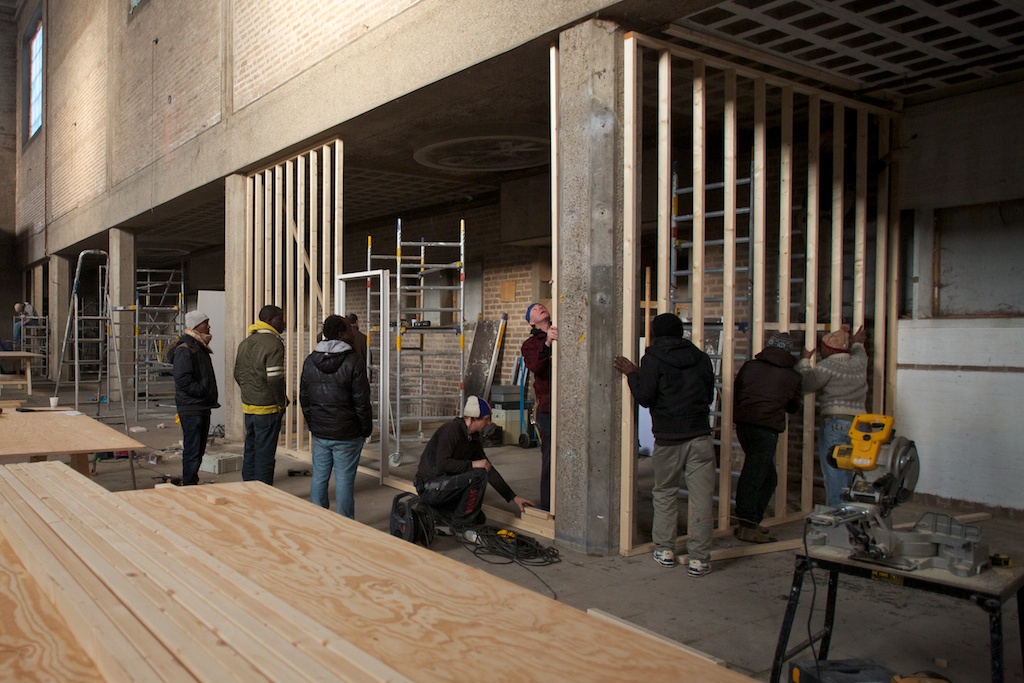 The construction of dormitories