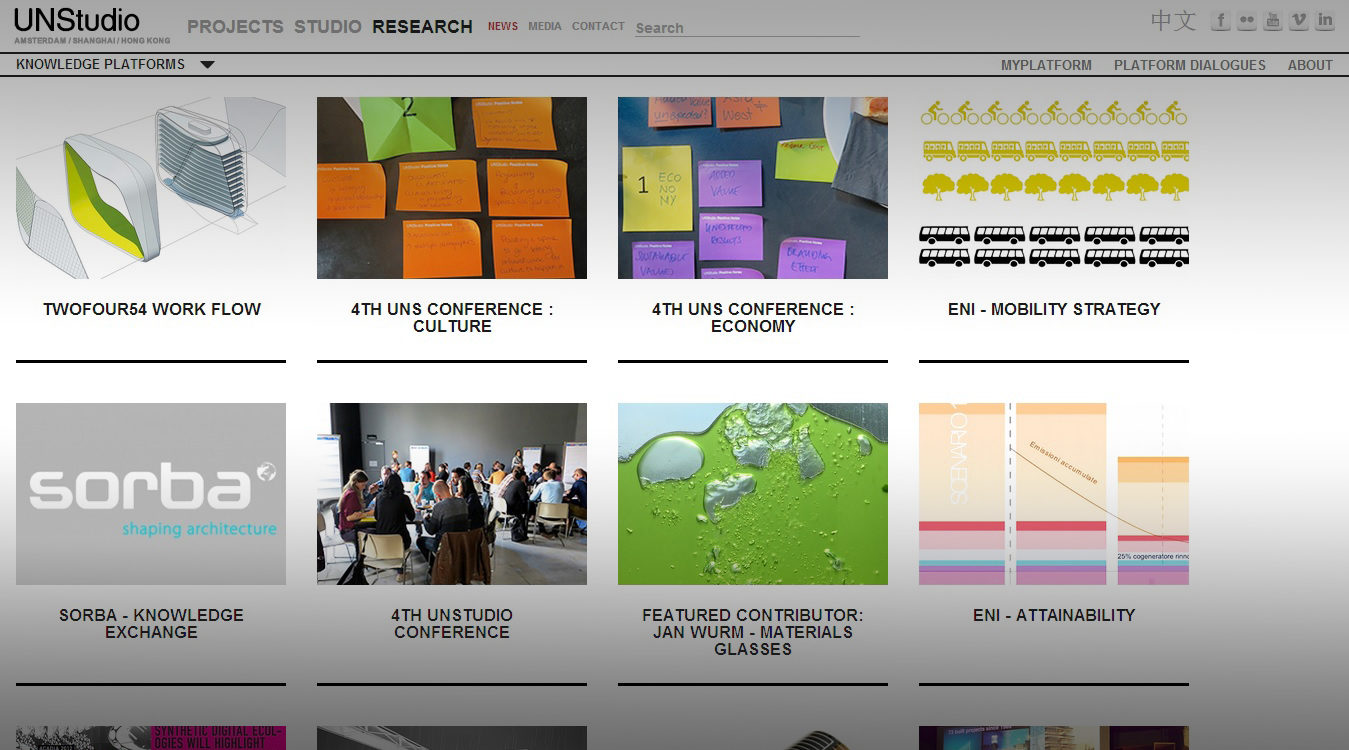 What were you doing that glorious April the 9th 2013, the day when UNStudio announced that they were going open source? You don’t remember? Don’t worry, it’s not that big of a deal.

The announcement that UNStudio did a ‘relaunch as open source architecture studio’ got picked up by all the big architecture blogs: Dezeen, Archdaily, Archinect and even Waag, producer of the book Open Design Now, wrote an article about it. While I don’t blame Dezeen, Archdaily and Archinect for not being more critical, Waag should know what real open source is. Yet, they just went with it. Anyway, let’s start with a few catchy phrases Ben van Berkel came up with to plug his new open source network:

“(…) we became fascinated by the new initiatives put in place by online start-up companies — such as social networking firms — who have moved from an old economy to a far more innovative economy which celebrates communication, open exchange and co-creation.”

“I sometimes believe that we all live in the iPhone 5 phase while architecture is still in the Walkman phase.”

“Knowledge sharing – from nodes to knowledge, from network to meshwork.”

Diagram illustrating the potential applications and developments of UNStudio’s knowledge & Twofour54 Media Zone 1, featured in STORY OF THE DOUBLE-SKIN FACADE.

Reading the blog posts and the interview with critically acclaimed Dutch architect Ben van Berkel raises some questions. What exactly are they going to share? Will it be more than just some sketches they have laying around? Could it be a big database of materials and tools? Or maybe a bucketload of failed competition entries? Unfortunately, the platform features none of this. At his very moment there are only 27 articles available (they’ve been online for 6 months now), 26 of which were written by UNStudio, and most of them are as vague and imprecise as their view on open source. At some point articles are even contradicting each other:

“In a typical office, 65% of the total emissions are from the people who are using the building.” – from the ENI – ATTAINABILITY article.

“Passive design tools are seen as the starting point of sustainability. They have the biggest impact on the environmental benefit and are financially efficient. (…) Natural light impact, orientation of the building, open and closed façade strategies, glazing strategy and related program orientation, natural ventilation and air tightness” – from the ACTIVE AND PASSIVE CIRCLE article. 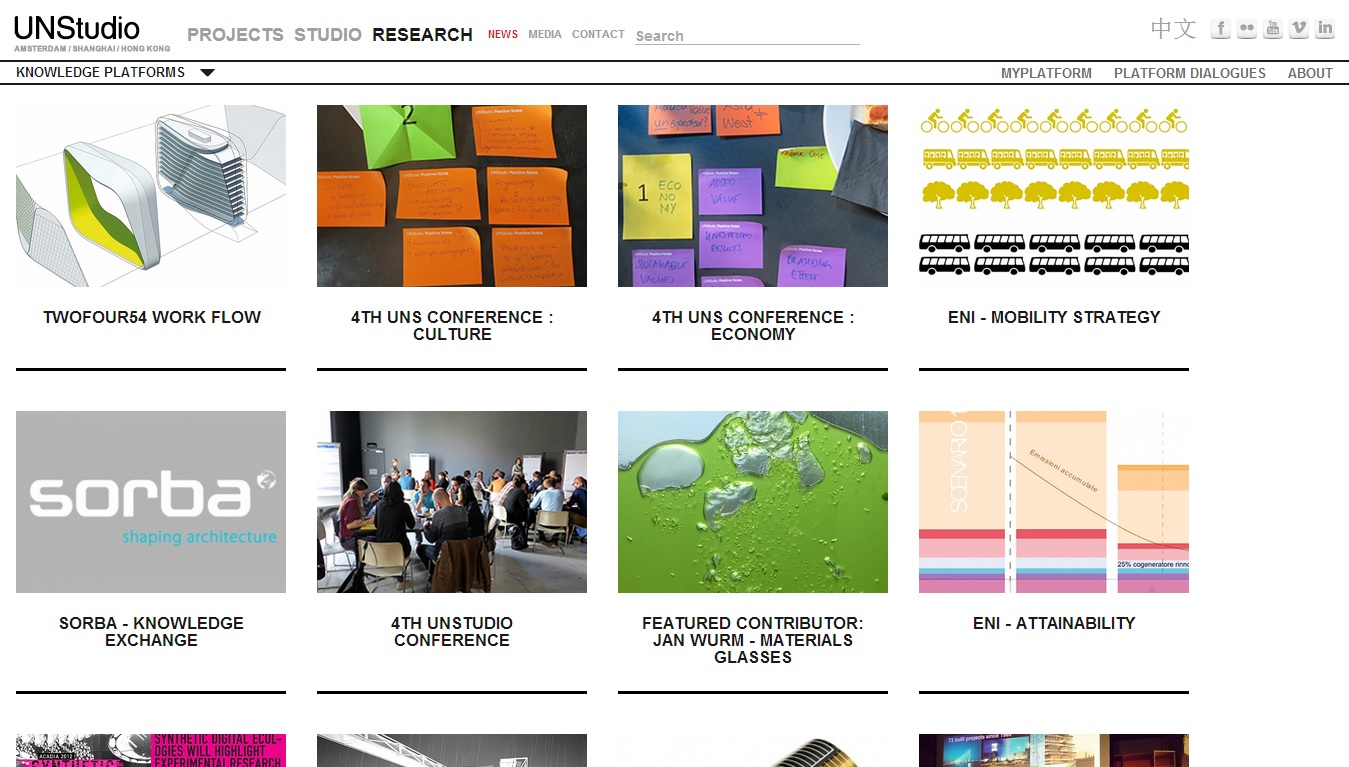 Screenshot of the platform and its articles

None of the articles actually reveal useful or new data, so yes it is open source, but no, it is not the office revolution they want to make you believe it is. They write about the percentages different measures have yielded in their designs and ideas, but they don’t let us know how they work and why they work as they say they do. The article ENI – ATTAINABILITY features a cool list of possible design scenarios with strategies that have been studied:

To achieve this goal, several strategies have been studied:
1. Sustainability of the site
2. Development site
3. Water management
4. Energy and emissions
5. Materials and resources
6. Indoor environmental quality”

So where can we access this research? Turns out you can’t and the actual research is safely tucked away someplace closed source. I was not the only one concerned about the supposedly good-hearted nature of UNStudio to go open source. Some more illustrative quotes on the open-source news five months ago and one from the Terms of Use from the platform show how the public predicted the end result, and how UNStudio defines how open source their platform really is:

Archdaily:
“I wish architects and architectural writers wouldn’t use the term ‘open-source’ so ignorantly.” – Dave
“UNonsense is a more suitable term I think.” – Flytoget

Archinect:
“Almost certain this is nothing more than a publicity stunt.” – Tunderclap

Terms of Use:
“UNStudio is at all times entitled to edit, modify, suspend, remove or discontinue, temporarily or permanently, MyPlatform and/or any (parts of) Content, with or without prior notice, as UNStudio deems appropriate.”

There is however one article worth the read if you ask me, and that the STORY OF THE DOUBLE-SKIN FACADE. It’s a complete article with detail drawings, numbers and explanations on how and why. This is something you can work with, something that is usable as a base for continuing research.

What does speak for UNStudio is that there are very little – real – open source architecture projects, let alone companies. The best recent example is the wooden skyscraper concept by Michael Green Architecture (MGA). MGA released their thorough research on wooden skyscrapers open source in 2012. Their research ís complete (240 pages) with details, sections, cost and reference projects.

“This decision (to release the research as open source, ed.) underscores our belief that these ideas are stepping stone concepts to the types of systemic change necessary to address climate change issues in the building industry with the increased use of sustainably harvested wood in building structures.” – MGArchitecture

Famous WikiHouse by 00:/ is another example that is completely open source. It is a human scale puzzle-piece house that can be downloaded and edited by everyone using free software. But is it architecture? The open source Open Architecture Network contains an enormous amount of data, drawings and concepts, but has been inactive for over 2 years. These few examples do show that it is possible to connect architecture with open source in its true form.

So what about the catchphrases that defined the new start of UNStudio? Yes, I believe they are fascinated by the new world of open source, sharing and collaborations. They saw the beauty that is open source, but they don’t fully understand what is involved in taking this huge step. I also believe that they wanted a piece of the pie. They built their own platform and generated some buzz, but unfortunately that’s about it. The articles featured are boring, imprecise and hold no inspirational value at all. Yes, we live in an iPhone 5 world, but as Dave puts it very well in the ArchDaily commentssection: “The give-away here is that Van Berkel seems to think an iPhone is a good analogy of where he’d like to be, whereas Apple products are probably the least appropriate illustrations of the value of open source ecologies“. As for the “from nodes to knowledge, from network to meshwork“: only one article featured in the platform by someone outside of UNStudio. And the last: are they the first? First to do what? Writing articles with no real added value and publish them on their own website?

It takes a completely new corporate philosophy and business model to go open source, something UNStudio just didn’t understand. They’ve tried to ride the open source wave, but failed. Maybe grandpa UNStudio should just stick with what he knows, and let the new generation use open source as it is intended.