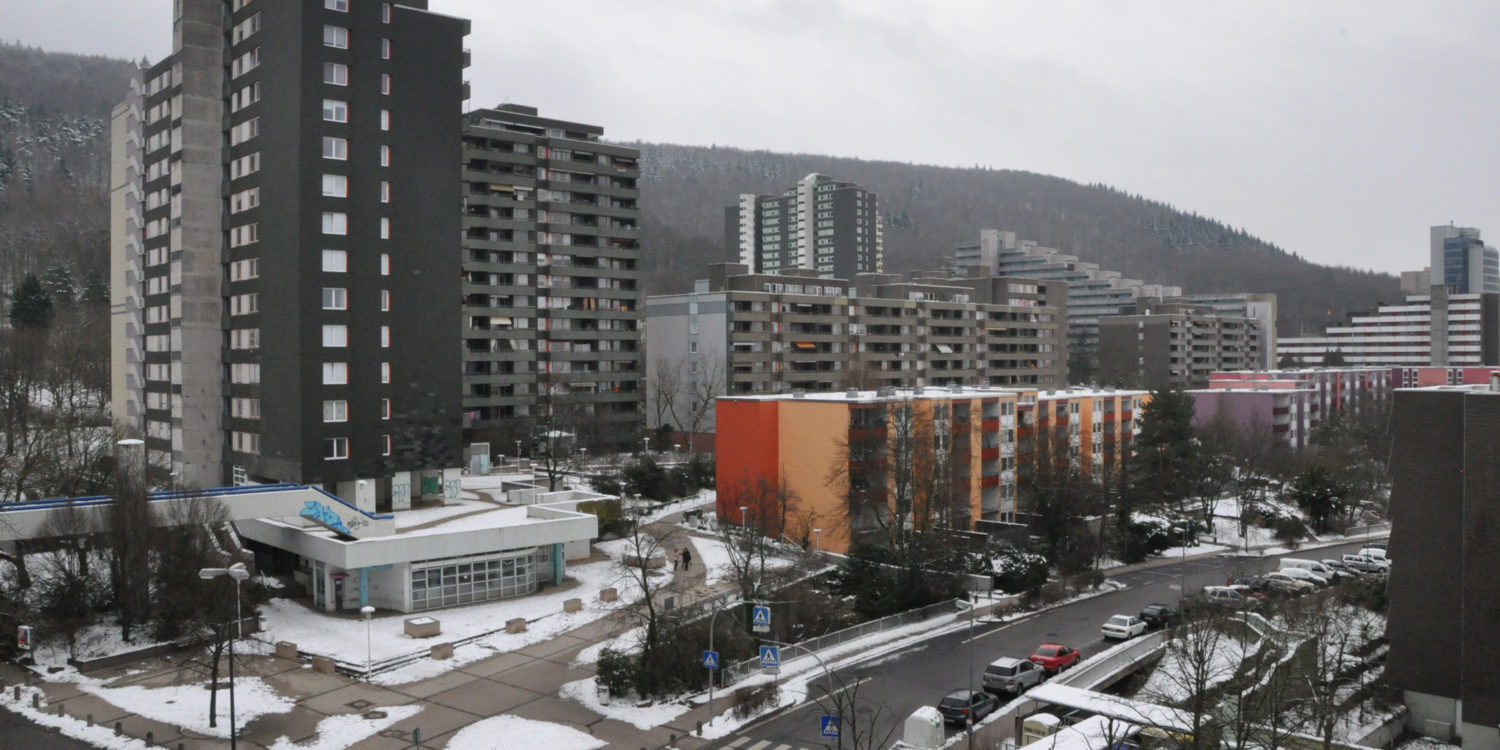 Everyone, including its designers, seemed to dislike the Emmertsgrund housing estate in the early 1970s. How did it manage to survive and what is its reputation today?

In a popular talk show on the German public broadcasting channel ZDF, the housing estate Emmertsgrund in Heidelberg was used by the presenter as an example of a ‘ghetto’ and ‘trouble hotspot’. While the broadcast was screened in April 2016, the estate’s negative reputation has its roots in the early 1970s.

Emmertsgrund, conceived and realized between 1968 and 1974, is known among city planners as a significant failure. Even its designers chipped in to criticize the estate, with some of them calling it a ‘concrete ghetto’. In the recent past, however, the initial design has been transformed, and today the estate is a lively part of the city with a diverse population. How did Emmertsgrund’s negative reputation come about and how has it evolved over time? 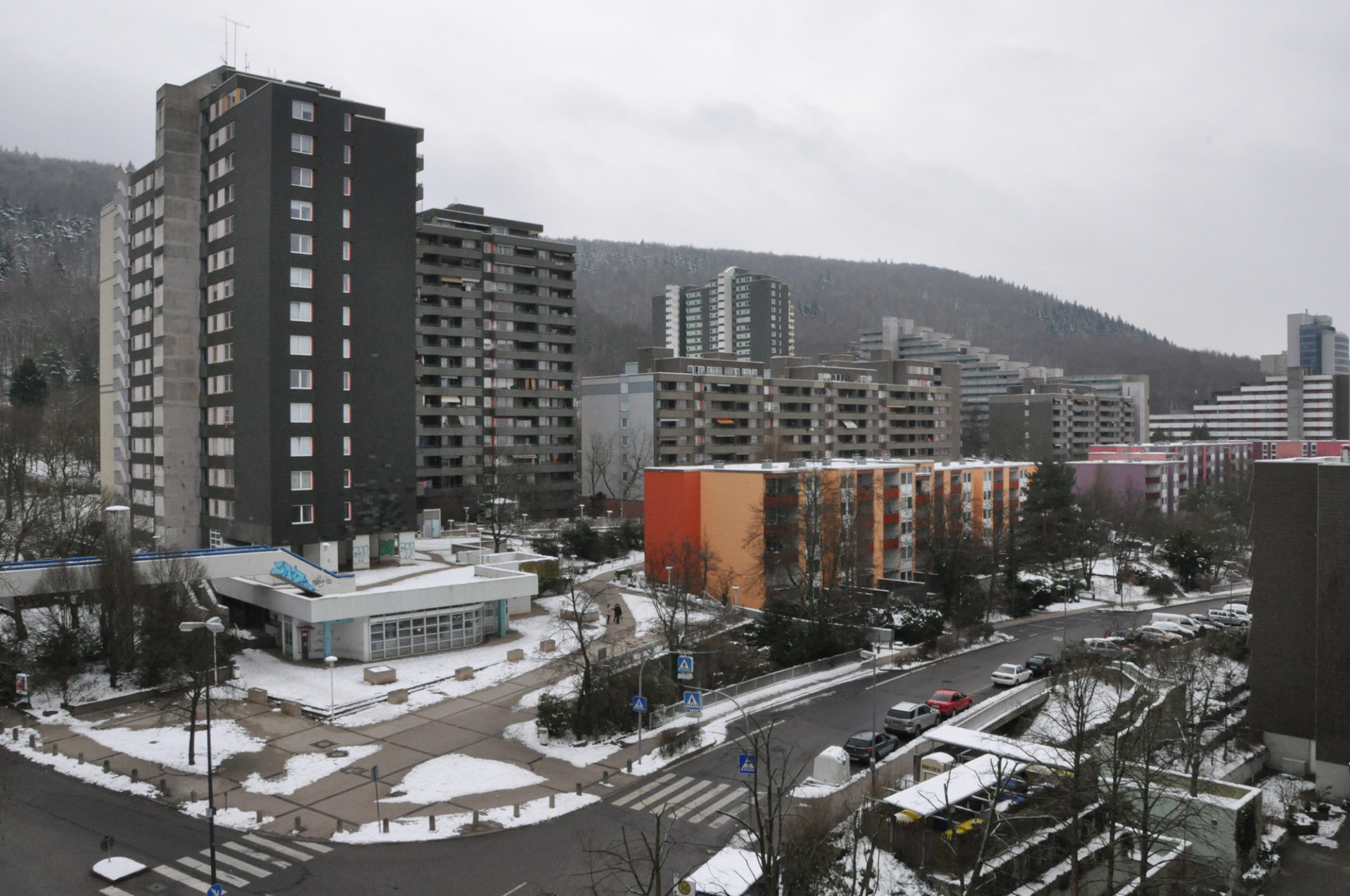 The Emmertsgrund estate is located on the western slope of the Königstuhl massif in woodland directly south of Heidelberg. It was conceived from 1968 onwards by a board of well-known consultants, its most prominent member being the psychoanalyst Alexander Mitscherlich. The architectural competition was won by the duo Fred Angerer and Alexander von Branca, who included many other architects in the planning of the estate. Construction works began in 1971, with the first houses being completed in 1974. 3,000 residential units were planned to accommodate 10 to 12,000 residents, who were provided with numerous facilities such as a swimming pool, elementary school, community centre and small shopping centre. Upon completion, some buildings were taller than originally planned in order to accommodate more flats, while others were cancelled due to the economic downturn of the early-1970s.

The estate was planned along a pedestrianized main axis running north-south, known as the Emmertsgrund Passage. The first construction section was situated in the north and featured multiple partly terraced housing blocks counting up to seventeen floors, as well as lower terraced houses. The most remarkable features of the estate were the exteriors of the high-rises, which were daubed in a green-grey tone, while the outer walls were cladded with cement asbestos plates of a similar colour. The colour scheme made the buildings harmonize with the colours of the surrounding forest, toning down the estate’s massive size and making the flats blend into the hill slopes.

Already by 1975, decisions were made to reshape parts of the original design. Instead of erecting more tower blocks, row houses and single family homes were constructed on the western part of the slope. This has led to an unusual juxtaposition of architectural styles. 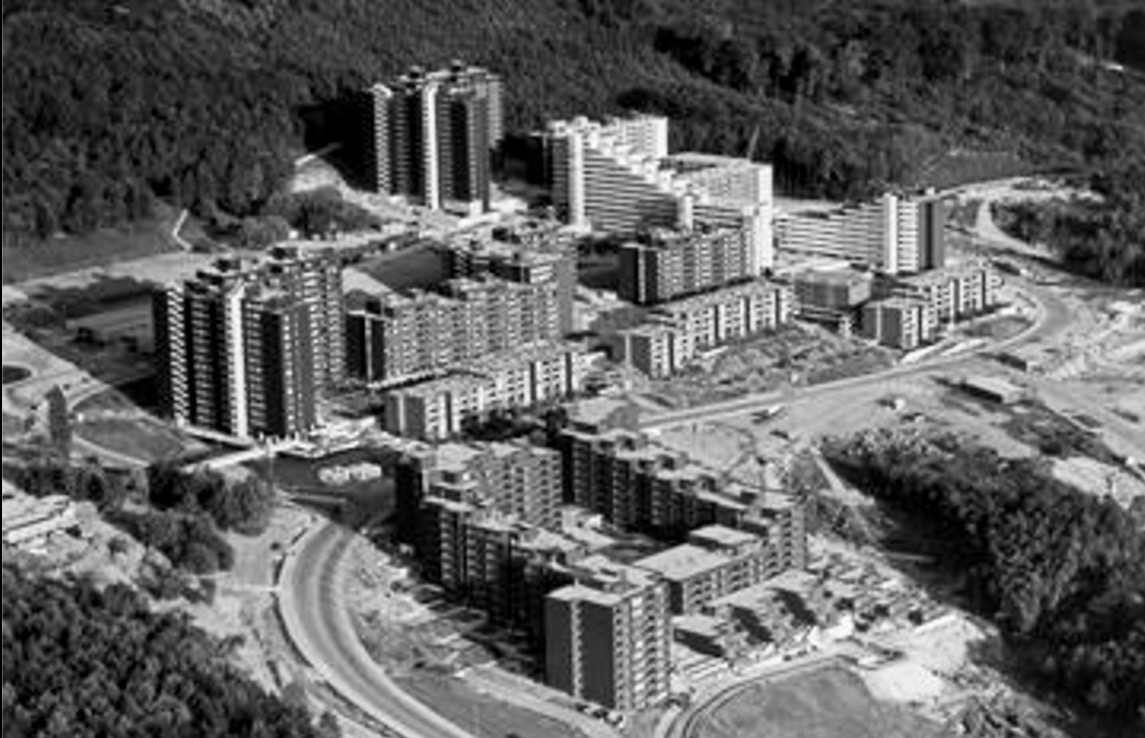 Even before construction work was finished, the popular and professional derision of Emmertsgrund had already begun. The project had been originally intended as a chance to design family-friendly mass housing with lively surroundings and thus received much, tentatively positive, media attention in the late 1960s, but it was soon doomed as a lost chance to change the negative image of mass housing estates.

Already in 1975, with the completion of the first building phase, human geographers from the University of Heidelberg criticized Emmertsgrund’s alleged overheating, obstruction of views, the bad orientation of its dwellings and an inadequate adaptation to the conditions of the terrain. They vehemently attacked the state’s top design adviser, Alexander Mitscherlich, stating: „The expert MITSCHERLICH let his model city down“. The expectations, in this case, were apparently higher than usual  – as if a renowned psychoanalyst could provide extraordinary breakthroughs to classic satellite estate problems, like remoteness from the city centre and a lack of local jobs.

Mitscherlich himself even said that he nearly suffered a stroke after seeing the estate upon completion. Furthermore, without explaining why, the architects Angerer and Branca chose not to include Emmertsgrund in lists of their works. It is likely that communication between the architects, the board of consultants and the city council failed or was at least unsatisfactory. The most probable explanation for the disappointment of the professionals involved seems that either they were not consulted about the final changes to the project, or their remarks were not considered. In the end, they voiced their disappointment in public, aiming to chastise the city council.

This quick condemnation by both designers and other experts considerable shaped media reporting. The main points of criticism were the insufficient shopping options, the lack of local jobs and the monotonous look of both the buildings’ interiors and exteriors. Quoting experts at the Institute for Urban Planning at the University of Karlsruhe, already in 1973 a local newspaper was warning that „ghetto creation“ could occur in Emmertsgrund – without having any proof for this assumption. The condemnation of Emmertsgrund was in line with the general bad reputation of mass housing estates in West Germany in the late 1960s and early 1970s. The fact that a showcase project went wrong (or rather – was judged to do so), and that even the designers of Emmertsgrund were disappointed with the results, seemed to be the final proof that large housing estates were simply doomed to failure. 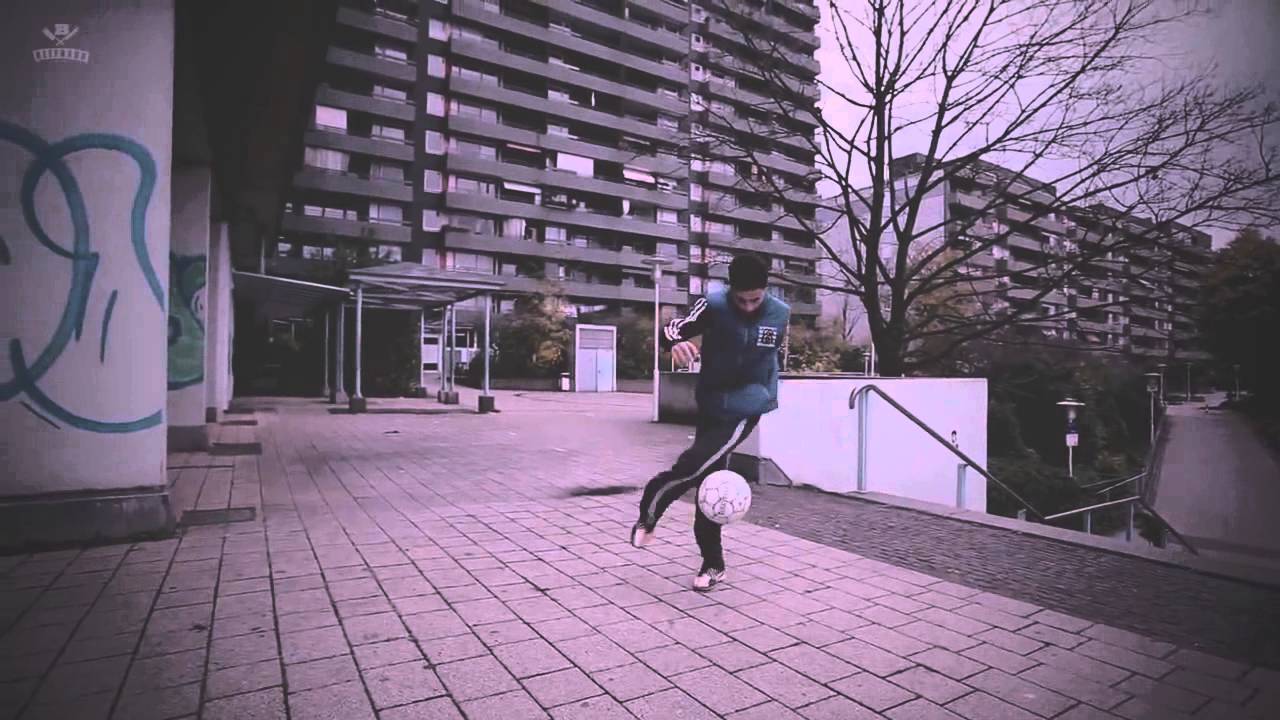 However, a more positive tendency can be noticed in other reporting, limited only to local media. During the construction phase, one of the local newspapers wrote of „declarations of love to the Emmertsgrund“, and extra attention was given to the activities of the estate’s voluntary association. Since 1996 a local magazine has also been published through a grassroots initiative from the estate, thanks to which the viewpoint of its residents has become part of the dialogue. Nevertheless, the estate is still frequently mentioned in a negative context by the national media.

Disparity between the perspectives of residents and outsiders is certainly not a phenomenon exclusive to Heidelberg. As recent studies show, the residents of other German housing estates from the post-war period such as Berlin’s Marzahn tend to evaluate their surroundings more positively than the wider public. In addition, it should be noted that the perception of Emmertsgrund as a „ghetto“ with higher crime rates is not reflected in police crime statistics. And the ghetto label is not all bad – the local rap scene values such connotations, which has led to their inclusion in the community’s image campaign.

In recent times, a whole range of architectural, aesthetic, urban and societal measures have been taken to overcome the insular structure of the quarter and to encourage the formation of connections between different social groups and ethnicities. In fact, two out-of-three inhabitants are from a migrant background, coming from over a hundred different countries. In the end, the primary link between these diverse groups is the fact that they are residents of the same quarter.

It should be mentioned here that neither dismantling nor demolishing the high rises in Emmertsgrund was considered. This separates the Heidelberg housing estate from many others, not only in East Germany. The residents of Wolfsburg-Westhagen, for example, demanded a dismantling and remodelling of their houses, a plea that was extensively covered by the local press. In contrast, in Emmertsgrund, vacancy rates have been low, with residents frequently opposing the sale of social housing. This allowed for the preservation of the quarter‘s heterogeneous social structure and prevented the displacement of socially disadvantaged residents.

It seems as though the estate needed time to establish itself. The following decades of use and slow transformations would prove that even Mitscherlich’s wishes were fulfilled over time. With the community centre, a space for civic life is provided, the exteriors are diverse, and, thanks to many initiatives, a lively social exchange takes place.

Mass housing estates are often stigmatised and suffer from a bad reputation. However, when looked at closely and without bias, the realities are more complex and not only negative. This is definitely the case for Emmertsgrund. The plans for Emmertsgrund were modified parallel to the execution of the first building phase, mainly because of deteriorating economic conditions and strong criticism from associated professionals.

The fact that Emmertsgrund will not be expanded offers the opportunity to preserve the structures which have grown over the decades, with all their discontinuities and contradictions – not as a memorial, but as a living testimony to an urban planning experiment and its controversial results. Thanks to local and communal efforts, today’s Emmertsgrund serves as a space that its diverse population can identify with. This – and not the alleged failure – makes this mass housing estate exemplary of the process of urban adaptation. Emmertsgrund also shows that even projects considered a failure can prove successful in the course of time. However, this is only possible for those who are ready to call common prejudices into question and are undeterred by a mass housing estate’s bad reputation.

Monika Motylinska
Monika Motylinska, born in 1986 in Poland, is an architectural historian, currently a research fellow at the Leibniz Institute for Research on Society and Space in Erkner (Oct 2016-Sept 2018). Her ongoing research project investigates the GDR architecture abroad in the context of transnational networks and cultural transfer. In December 2016, she defended her PhD thesis at the Technical University Berlin on handling the post-war heritage in Germany.

add comment
Pia
I have a very ambivalent relationship with this 'concrete ghetto'. Born and raised in Emmertsgrund, I used to see this 'social and architectural failure' through the eyes of a kid and would not change a day living somewhere else. It was one big playground! I never experienced such solidarity and identity within the most diverse community. Moving away to study architecture, to gain experience all over the world, it is still difficult for me to have a subjective point-of-view. However I start to observe it from a more sober and architectural perspective. Whenever I am visiting this fascinating enclave, instead of spotting the failure, I see success in every detail (playful, green and shared courtyards; the whole idea of a second infrastructure of underground parking; the balanced dualism between privat and public space) - I truely recognize fundamental ideas of modern urban design / housing, which are a great success at Emmertsgrund, mainly because of the people enliven it! Thank you very much for giving me a new insight of my home! It is very refreshing to read such an informative article - critical yet close to the people. 'Emmertsgrund also shows that even projects considered a failure can prove successful in the course of time. However, this is only possible for those who are ready to call common prejudices into question and are undeterred by a mass housing estate’s bad reputation.' - on point !
Related