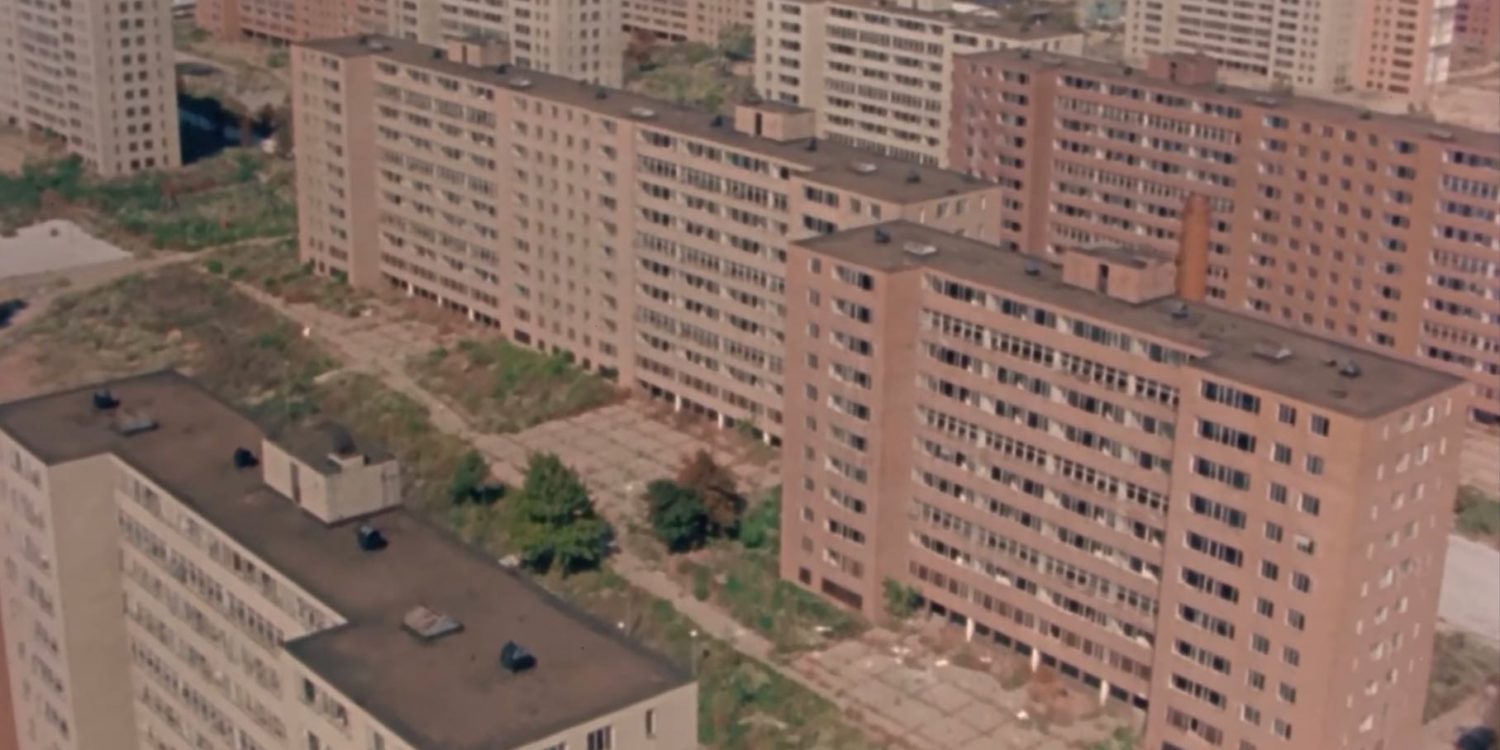 Since the 1930s, the changing narrative of documentary films portraying urban failure has influenced urban and architectural thinking.

Since the beginning of the medium, documentary filmmakers have been fascinated by cases of architectural and urban failure. The personal stories of those affected, reflected in the backdrop of ruins and urban decay, provides fertile ground for documentary filmmaking. The films produced now provide us with a rich source of material for the analysis of architectural failure during the 20C. Not only the individual cases of failure but also the wider narratives that have shaped architectural and urban thinking throughout the century.

At its core, this narrative was that the overcrowded dilapidated 19C city was no longer fit for modern man and needed to be replaced with a well-designed alternative. Not only the quality of the housing was called into question but the whole city form needed to be altered to meet the demands of modern society, “death to the street” being the prevailing quote from the time. The alternative to this city was found in the design of high-rise estates and suburban new towns connected by new road networks. With such a strong narrative of the liberating power of design what could possibly go wrong?

The slums were real. Poverty, dilapidated buildings and inner-city overcrowding were genuine urban problems that had to be dealt with. There was no simple solution and in the spirit of the times, those solutions favoured held firm to the belief that design would solve all problems. Many of the early documentaries did not question this logic, and were produced almost as propaganda pieces advocating the ideologies of the architects, planners and developers of the day.

These two key documentaries from the 1930s, Housing Problems (1935) and The City (1939), are the best examples of how this style of documentary worked. They follow a simple narrative arc that presents the problem, followed by the solution and finishes with an optimistic ending. They set out to convince the viewer about the solutions without any real social or urban analysis taking place within the frame.

In Housing Problems (1935) directed by Arthur Elton and Edgar Anstey, we hear from the residents of tenement housing in Leeds describing their living conditions. Looking rather dated today this documentary was groundbreaking at the time being the first to use recorded interviews on location. As you can see from the living conditions an improvement was clearly needed. This was provided by the documentary’s sponsors, the Gas Council. They advocated tearing down the failed buildings and replacing them with the Quarry Hill Estate, a large-scale modern complex, with housing blocks built using the latest construction techniques and fully fitted with all the latest gas fittings, of course.

The sponsors of The City (1939) the American Institute of Planners advocated a different approach. The screenplay was developed by the urbanist Lewis Mumford and the film directed by Willard Van Dyke. It portrays the American city as a dirty, polluted and overcrowded place full of problems, the solution was to start anew with carefully planned, comfortable and clean garden city style suburbs connected by the car. Greenbelt, Maryland is the exemplar presented in the final act of the film. How the new network of these well-designed towns will solve the problems of the inner-city is conveniently left unanswered.

How did these proposals fare? Housing Problems’, Quarry Hill was demolished in the 1970s. The development was welcomed when the first residents moved in but it soon became plagued with construction and maintenance problems and became one of the first recognisable failures of the modern movement in the UK. While The City’s approval of suburban sprawl exacerbated rather than solved the problems of the American inner-city, which suffered for decades, resulting from the flight to the suburbs and the associated motorway building programmes.

This is the real narrative to be derived from 20C urbanism, which was repeated in numerous locations around the world, and has become all too familiar. Problem slums are cleared and replaced with a poorly executed version of a modernist utopia, or an exurban development. This is an improvement at first and welcomed by residents, but it then, in turn, becomes a problem, the real social ills remaining the same.

Nowhere is this story more perfectly illustrated than in the fateful tale of the Pruitt-Igoe housing complex in St. Louis. The icon of urban failure it has appeared in different posts on this site and in numerous documentaries over the years, most notably its demolition in Koyaanisqatsi (1982) and Robert Hughes Shock of the New (1980). In Shock of the New the complex features at the culmination of an episode looking at the developments within modern architecture and urbanism in the 20C. Entitled – Trouble in Utopia – the narrator Robert Hughes quotes Charles Jencks’ declaration that “Modern architecture died in St Louis, Missouri on July 15, 1972, at 3.32pm….” the detonation time of the towers. This quote sums up a lot of the sentiment around the history of Pruitt-Igoe. Its faults and failure blamed on the design.

While Pruitt-Igoe’s design was clearly deficient in many aspects, there is a danger in blaming it’s failure solely on design. This ignores all the other factors that were at play in St. Louis at that time and taking this position perpetuates the modernist myth that design can solve all social problems. This is the same myth that was presented to us in the first two documentaries Housing Problems and The City. This myth allows for simple reading of the conditions and allows for the real social ills to be covered up without any true and meaningful social analysis taking place.

This has been explored in a recent documentary directed by Chad Freidrichs The Pruitt-Igoe Myth (2011). This documentary – partly based on this research by Katherine Bristol – takes another look at the complex web of social policy, maintenance and management, city politics, population decline, racial segregation, economics that occurred in St. Louis at the time alongside the design issues. It provides a more complete picture of the causes that led to the development’s failure, interweaved with the personal stories of residents.

While it is easy to analyse cases of failure with the benefit of hindsight, it is far more difficult to create a realist social document in an area that is undergoing urban change. In one documentary about slum clearance in 1970s Liverpool entitled Who Cares (1974) director Nick Broomfield does just this. Liverpool had at the time listed 70% of its inner city terraced housing for demolition. Broomfield documents the anger of residents who were being moved from their terraced streets to new high-rise suburban estates. We witness the disintegration of the close-knit community and the documentary makes the plea that future planning should take into consideration the lifestyle and wishes of the community. Broomfield revisits Liverpool again in Behind the Rent Strike (1979) documenting the inevitable failure of the new estates, and the residents fight for better conditions. These works don’t attempt to find a simple narrative based on myths, but document the reality on the ground allowing the complexity of the social issues to come to the fore. Which is the place to begin if real solutions to social problems are to be found?

add comment
Ulf Andenaes
Excellent article. I have written about these matters myself as a journalist for many years in various Norwegian newspapers. Those estates were bound to fail, but what has puzzled me is how devoid of common sense a whole profession must have been to believe that it would work out in the first place. Where was the consulting with psychologists, sociologists and other social scientists, environmentalists and plain local people? Ideology and property developers' hopes for maximum yield of capital act in an unholy alliance which in some cities of my country at the moment is stronger than ever. Yours, Ulf Andenaes. Yours, Ulf Andenaes, Norway.
Related