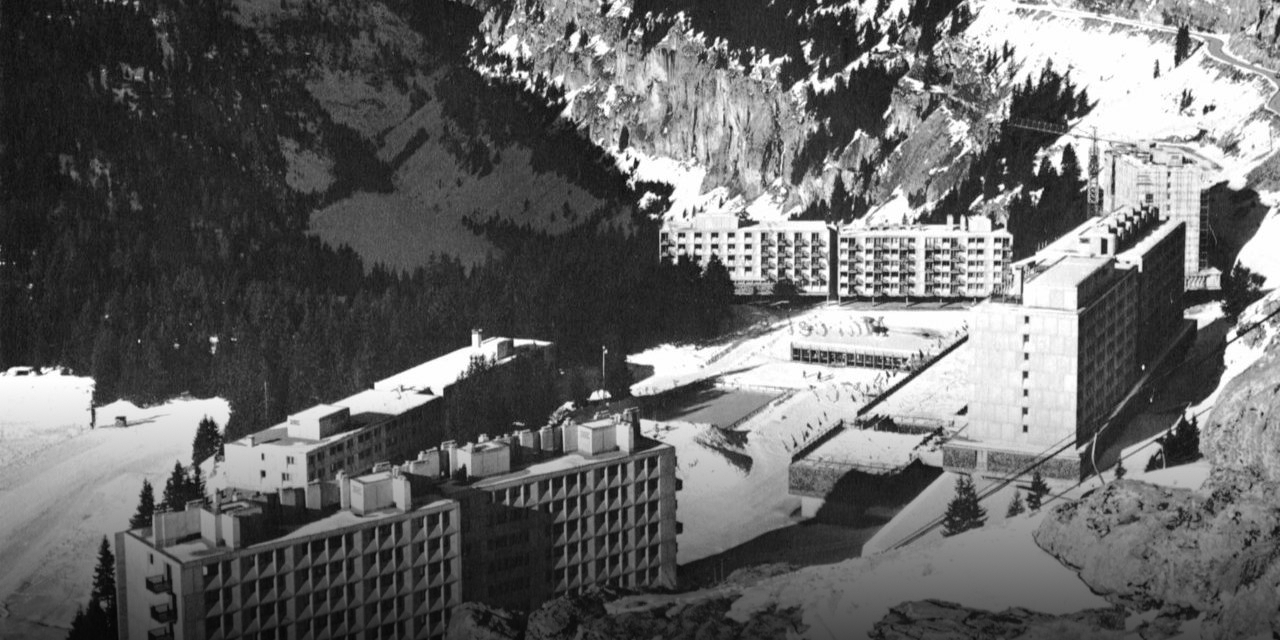 Modernism in urban design is widely despised, but far away from major cities, high in the Alps, modernism's aspirations continue to be realised.

Attempts to apply modernism on scales wider than the individual apartment block are deemed failures by default – urban planning has been suspect since the ’70s. However, far from major cities, it is still possible to re-live modernism’s grander aspirations: high in the Alps, at the ends of winding access roads, self-contained high-rise towns of concrete continue to enact communal dreams of euphoric everyday movement. 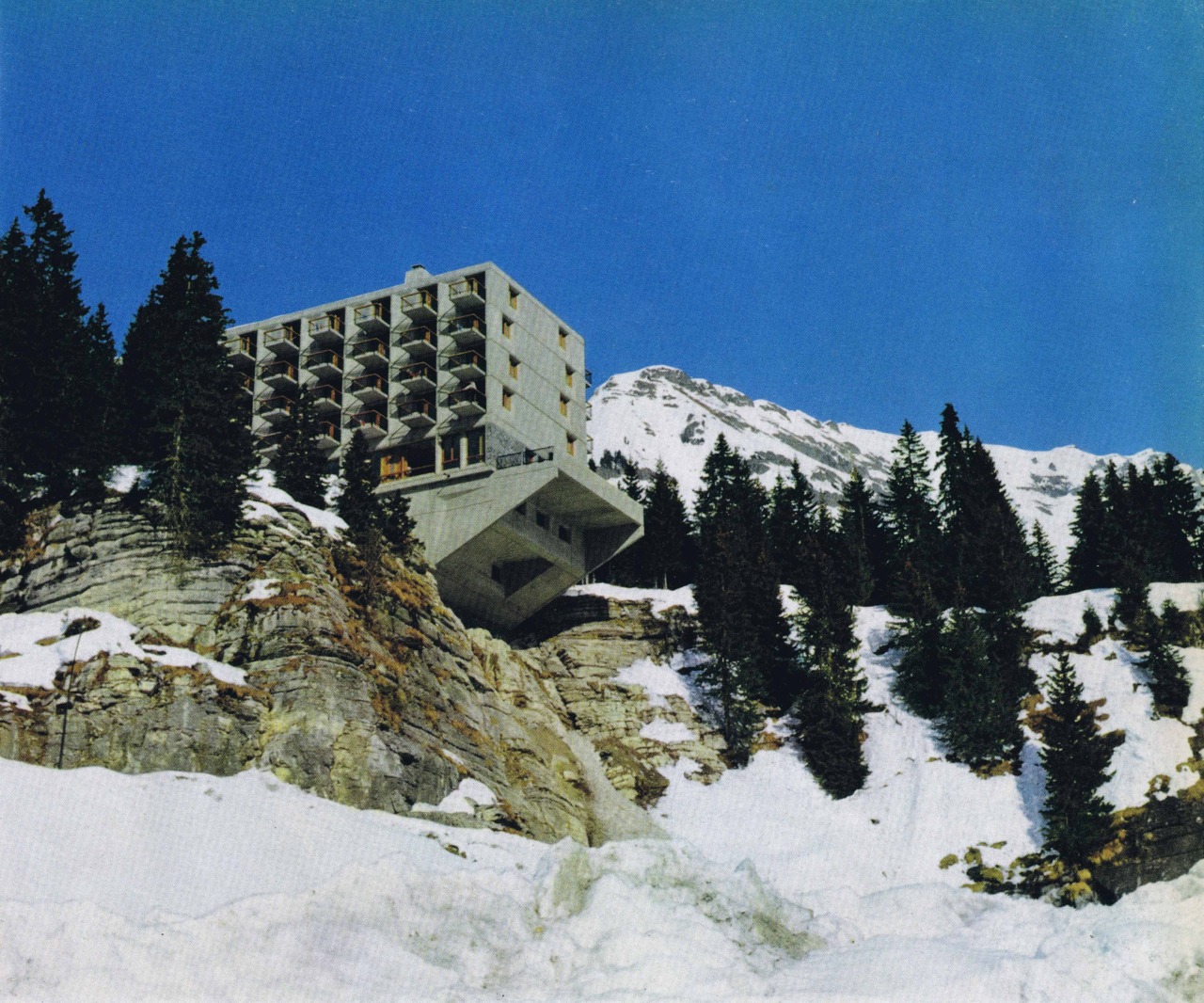 Enclosed Space and Sink-Estates
A house is a machine for living in. Le Corbusier’s modernist mantra outlines the progressive, functionalist basis of modernist architecture’s aspirations: the wide-scale provision of technologically sophisticated, high-quality housing, providing a high standard of everyday living for entire populations. In the form of urban planning, modernist architectural theory was applied to much larger areas. This application of modernism to the city implied a radical tendency towards the reformulation of the meanings of everyday movement, and arguably, of society. From a contemporary perspective, this mentality seems largely forgotten – progressive, creative, yet potentially totalitarian.

One particularly notorious plan for modernist urban planning was Le Corbusier’s unbuilt Plan Voisin. The design advocated for the demolition and rebuilding of huge parts of historic central Paris as a Ville Contemporaine of repetitive tower-blocks and expansive parks. In its disdain for the existing city – calling for widespread demolition and rebuilding – the Plan Voisin can be seen as a response to a particular stumbling block at the heart of the modernist project: the conception of space as divided into enclosed units, whether the house, the estate or the new-town. In practice, this meant that the integration of new design with the pre-existing urban fabric was often problematic. A more moderate approach was that of the optimistic planners of suburban housing estates in French cities, who held the belief that their highly successful designs would quickly become visible and desirable, given their futuristic differentiation from the historic built environment. They anticipated a gradual, popular reform of everyday life leading on from the success of the new designs.

It is widely agreed today, however, that modernist planning tended to fail in practice.  Arguments relating to the difference of modernist architecture resurfaced in the 1980s, when mobilised by modernism’s critics. They stated that social housing estates were in fact victims of their visual alienness; it had become easy for non-residents to project local fears onto the now working-class semiotics of concrete. But this argument wasn’t only about cultural association; it was taken further by the influential architectural movement of ‘Crime Prevention Through Environmental Design’, which applied psychology and sociology to argue that modernist design philosophy facilitated crime and anti-social behaviour. This was due to their labyrinthine designs, often separating pedestrian and vehicular access and providing multiple ‘escape routes.’ In relation to wider standard practices of responsive policing (relied on to a greater extent towards the end of the twentieth century), the ability to respond to crime within modernist estates was dramatically reduced. Similarly, the shift in responsibility from individual owners to councils for upkeep and maintenance was not backed by adequate funding. This soon lead to water-stained, pest-infected, crime-ridden neighbourhoods, all solidifying and legitimising the image of the ‘sink-estate.’

Cultural semiotics, underfunded maintenance and ineffective policing methods – the common root of these problems was a conceptual paradox at the heart of the modernist project: the application of geographical and cultural limits – as occurring in practice – persistently inhibited the possibility of a radical reformulation of everyday movement and space. 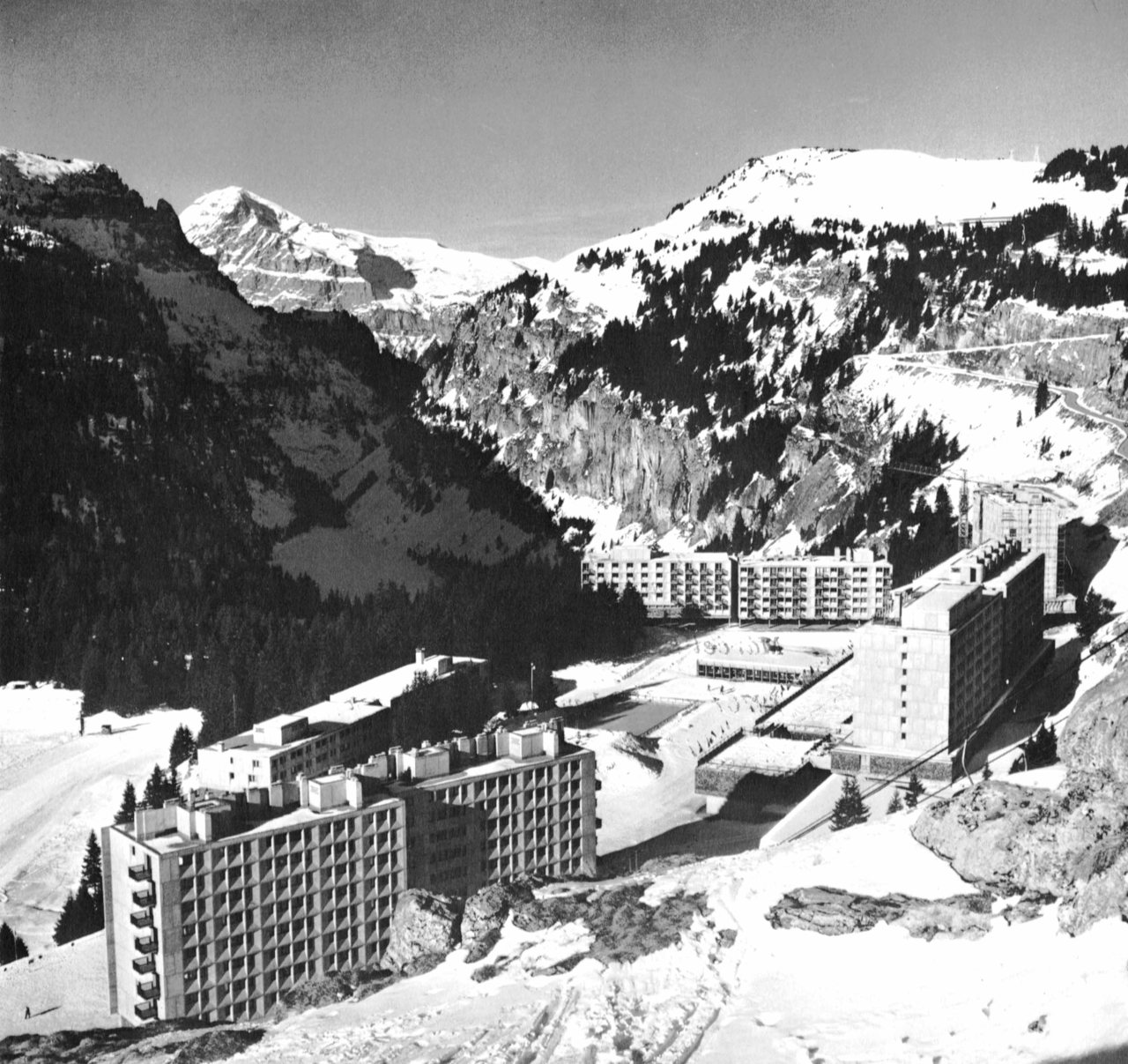 Purpose-Built Ski Resorts
In some situations, modernist design philosophy was more comprehensive in its coverage – a particular paradigm of this total project can be found in the mid-twentieth-century ‘purpose-built ski resort’ or station intégrée. Coinciding with policies applied primarily to the development of large-scale suburban housing estates across France, government agencies took a high level of control over the developers backing the construction of these resort towns. Situated far away from previous settlements, and at higher altitudes than previously occupied, these developments aimed to compete with the quickly-developing winter sports industries of other Alpine countries, which generally took the approach of supplementing existing villages with peripheral facilities. In the French Alps, these vast, remote constructions were the physical product of a political-cultural climate dramatically different in character to the 1980s neoliberal economics that still dominates today. Government planning departments were confident in the detailed management and generous investment in large-scale social and recreational projects – political-economic developments which aspired towards democratic levels of affordability and inclusiveness. Micromanaged governmentally but funded privately, the projects worked due to belief, held between sectors, in a form of recreational modernism implied in Le Corbusier’s mantra: movement equals money; a town is a machine for movement.

It would be a mistake, however, not to recognise that the architecture of these resorts varied widely; the generalised category of purpose-built ski resort, as used here, exists only at a time of general suspicion towards high-level urban planning. This is quite consciously a view from the present. Though often bearing subsequent updating attempts, these resorts are the fragile evidence of a short period at the aspirational peak of urban planning; of a world of total movement that was not only highly functional, but desirable. From a contemporary perspective, the developments appear as utopian non-places, situated in a historic  future, where dwelling was subsumed by complex, three-dimensional movement – an all-encompassing euphorically modern experience. 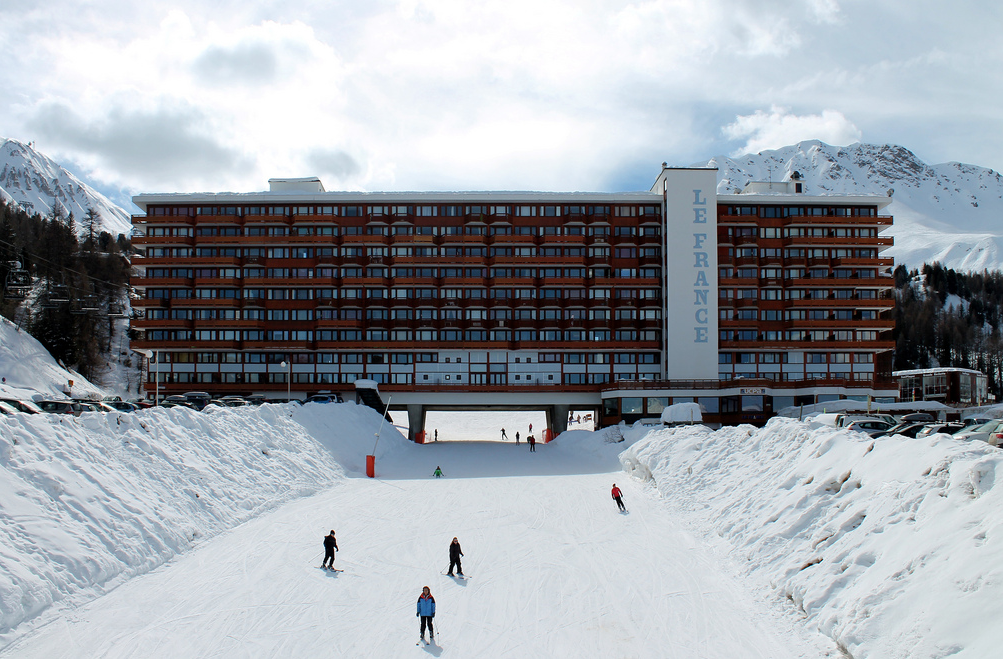 Infrastructure and Verticality
Within the purpose-built resort there is little or no attempt to transcend or disguise technologies (ski lifts, dwellings, the architecture of the resort as a whole); rather the resort provides a model in which this mechanical functionality is visible. Lifts within high-rise residences allow the buildings themselves to effectively function as porous vertical interfaces between different modes of movement: piste access on one level and road on another, sometimes with a further connection to elevated pedestrian walkways on a third level. Shopping-centres designed to act as thoroughfares allow pedestrians to move around the town in a safe, warm environment; snow-covered pistes necessarily cross asphalt roads at different levels, providing convenient routes for skiers and pedestrians to safely cross busy roads.

The utopian aim of many purpose-built resorts was to form networks of movements and rest that were not only complex and three-dimensional, but also democratic – where no apartment would have impaired views. For this to be achieved, a steep topography for the whole of the settlement was required. This not only created fairly distributed panoramas, but also allowed buildings to have direct access to vertically separated pistes as well as roads, and in some cases to pedestrian walkways.  As a microcosm in which the skier is integrated into the same urban environment as the pedestrian buying groceries, the architecture and planning of the purpose-built resort facilitates enactments of communal movement through three dimensions of space – a complex, networked, intense built-natural environment. This is, in effect, the application of the same vertiginous spatial orientation of skiing – controlled descent through steep, mountainous gradients – to the very design and layout of the resort. Such an integration of terrain, technology and built environment is reflected in the French term used to describe purpose-built resorts: station intégrée, or integrated resort.

Modernist Space
As the mountain brings the descending skier in towards to the resort, the approaching architecture becomes less an image or distant node, and more a complex assemblage of infrastructures engulfing the skier within its three-dimensional, topological forms – where definitions of inside and outside are blurred. On approach, the resort town moves from existing as a distant volume in space,  and begins to be comprehended as a conglomeration of infrastructures and people. The buildings themselves change from consisting of solid entities to revealing themselves as a complex, porous, networked entity. This infrastructural body has already engulfed the skier from the moment they were both planned; the subject is a part of this total architectural-infrastructural assemblage, is already folded in with the same vertical, topological nature-culture of the mountains, resort, technology and infrastructure. 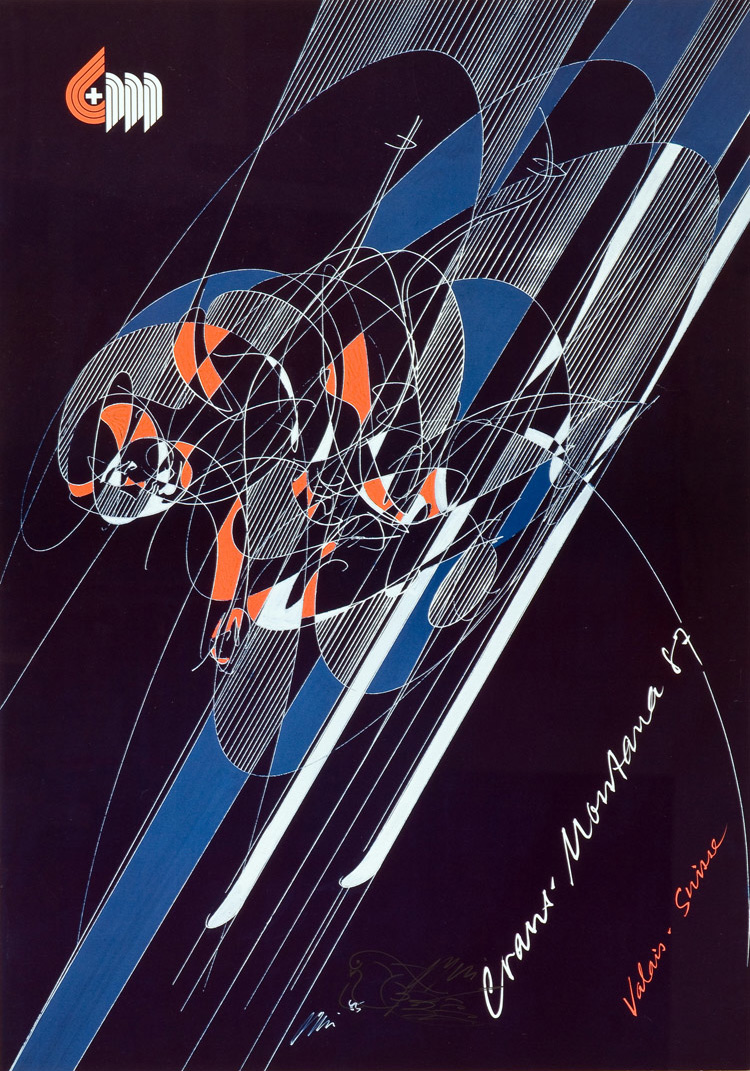 Common understandings of space, place and movement are revealed as insufficient in the purpose-built ski resort. This includes the very limits and thresholds used to contain and categorise the development. Instead, the resort is collected under the principle of smooth, graduated movements, where functionality exceeds its instrumentality and becomes euphoric. As the categories of inside and outside lose their meaning, collective, topological movement becomes a euphoric end in itself – the transformative, terrifying potential of modernism to integrate culture, technology and nature, is made visible.

David Mountain
David Mountain is a recent graduate of Goldsmiths, University of London, writing on urbanism, geography, music and architecture. His writing attempts to critically illuminate places at which politics, philosophy and everyday experience are tangible and fragile. He blogs at davemnt.wordpress.com.