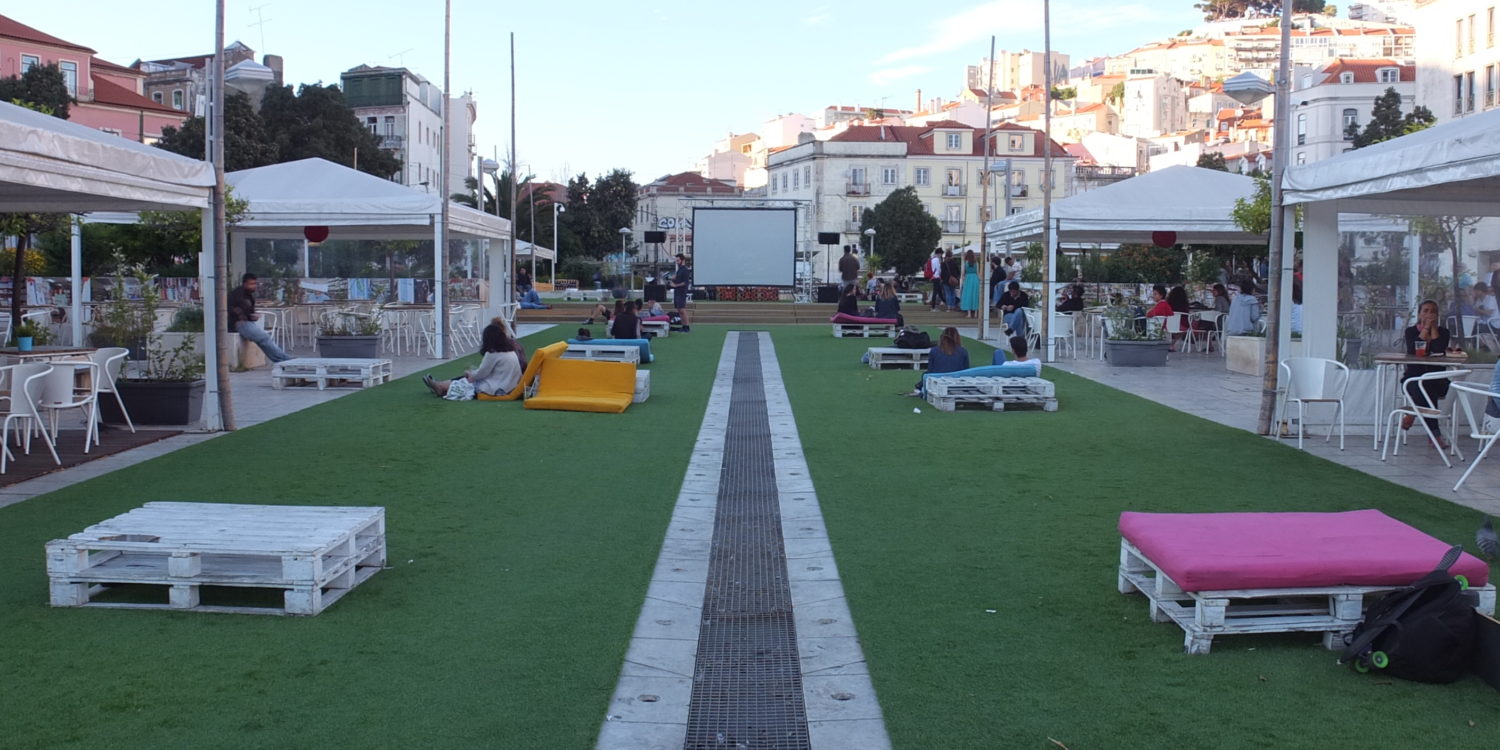 Going through a sharp rise in tourism, the historic centre of Lisbon is being subject to several, much needed, requalification operations. The opportunity for a real, integrative and responsible regeneration is on the table. But is it being overlooked?

Portugal may be better known as a country of emigrants but throughout its history it has also been the destination for many immigrants. This is particularly so in the country’s capital, Lisbon. Martim Moniz square undoubtedly represents one of the places that best shows the Lisboan proclivity for the confluence and conviviality of different peoples. It is therefore deeply regrettable to see the area’s recent turn towards exclusive private enterprise.

The Lisbon of the Middle Ages had defined quarters for Jewish and Moorish communities. The ghetto on the less salubrious North-West side of the Castle slope had been granted to the Moors in the wake of the Christian conquest. Ever since, this area has been a neighbourhood of immigrants, with communities of slaves freed in the 18th century, the Galician community and, more recently, immigrants from the former colonies and South and East Asia. This historical confluence has been instrumental in Lisbon’s and indeed Portugal’s cultural development. For instance, it was the close proximity of the historic West African migrant community to the poor and marginalised native Lisboan community that provided the conditions for the emergence of Portugal’s national music, Fado. 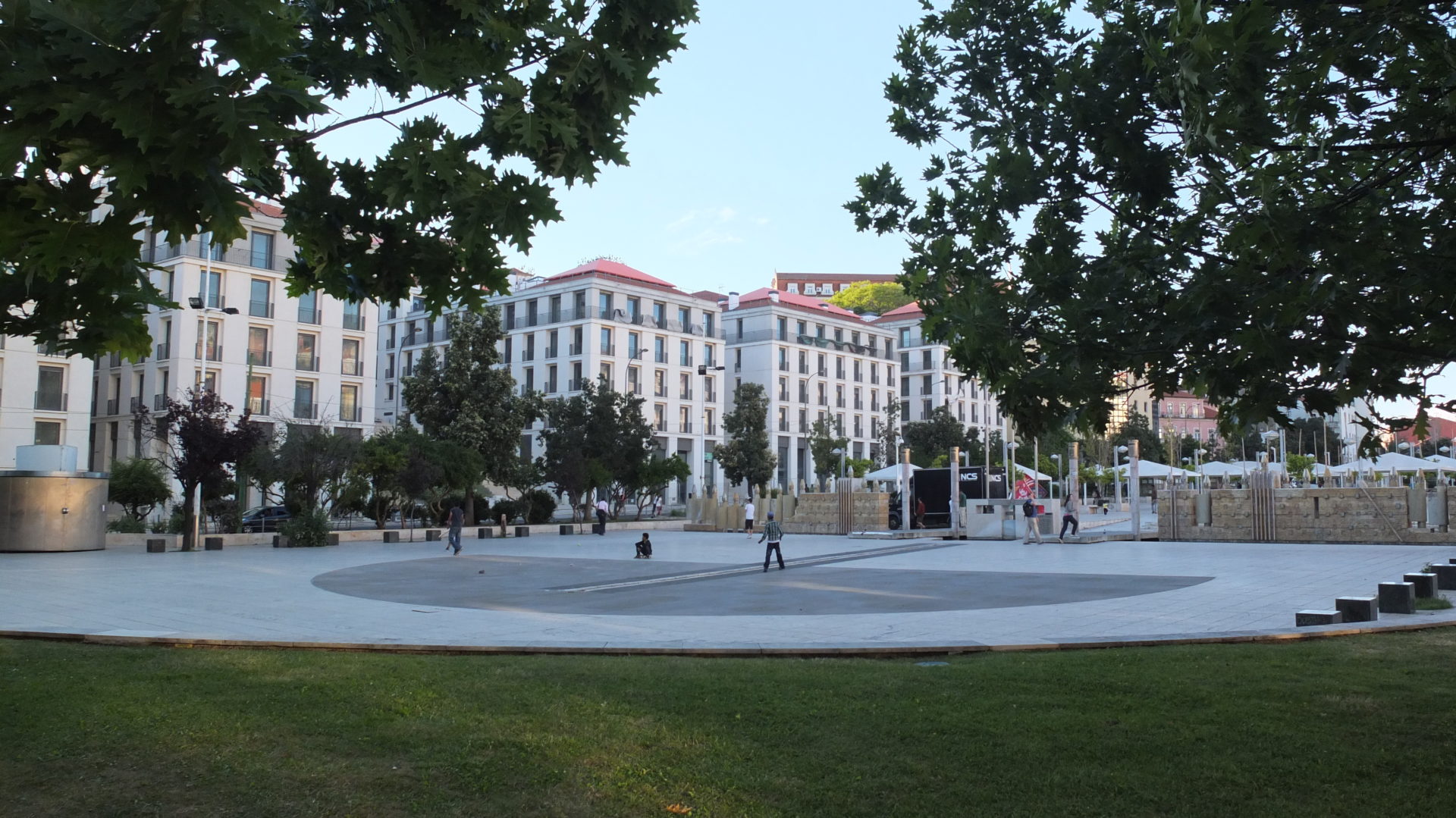 In the 1940s, with the intention to link Av. Almirante Reis with Rossio (and under the auspices of a neo-imperialist hygiene policy), a section of the Mouraria neighbourhood was demolished to make way for Martim Moniz. Various proposals were thereafter made for what to do with the emptiness resulting from this house clearing. However, not one of them actually got built until the 1980 launch of a public tender to draft an Urban Renovation Plan for the area. The winning designers, Carlos Duarte and José Lamas, declared openly that their solution represented the ‘continuity and permanence’ of the existing urban fabric. But their design was never completed in its totality. Only two shopping centres – Centro Comercial da Mourariaand Centro Comercial do Martim Moniz – were built, constituting the triptych that today, alongside Hotel Mundial, best visually identifies a site which has become one of the most criticized architectural ensembles in Lisbon.

The wholesale market, nowadays mainly run by the Asian community, has since grown in scale. It now hosts the principal economic activity taking place on Martim Moniz. The notorious shopping centres have both also been transformed into packed and bustling galleries, where large scale commerce intermingles in an endless hustle with the small scale informal sector. In contrast, the enormous empty space making up the square in front of the centres, declined rapidly from the moment of its completion. Following the construction of a car-park under the platform and an ill-fated landscaping project spearheaded by the architect Gonçalo Ribeiro Telles, the square’s position on the margins was further entrenched, all the while becoming a hotbed for the sale and consumption of drugs. 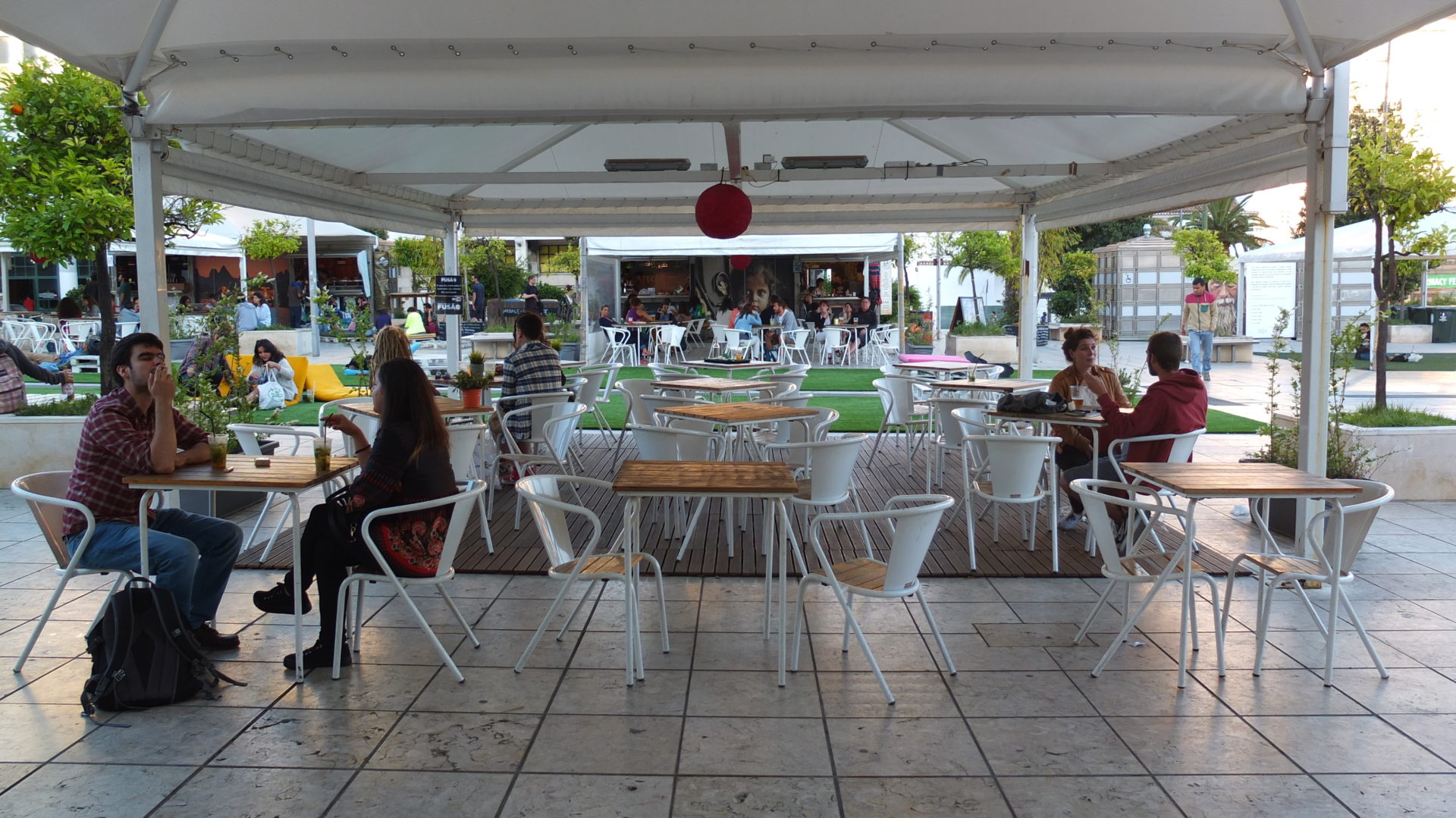 In 1997, the space was once again reformulated: around forty kiosks were installed with the objective of revitalising the square with a faux-traditional market selling regional products, antiques and handicrafts. But following the large-scale closure of most of these kiosks, the Lisbon Municipal Council removed the majority of them in 2000 to once again transform the square into a large, open place.

Despite its continued rough and somewhat dangerous reputation, this proved the point at which the square gradually began to be appropriated as a public space by those living and working in the vicinity. Right in the middle of the square or by one of the still surviving kiosks the square was slowly and steadily reoccupied and redefined by the population: as a place for passage, rest, consumption or as a venue for sport. At the same time it became host to religious processions, the beginning of the annual May 1st protest march, demonstrations on behalf of immigrants and many other events. “Sporadic but continuous“, these events were a confident expression of an ordinary Lisboan culture asserting itself.

In 2011, and with good intentions at heart, a public tender was held for the kiosk concession and for the launch of a weekend market. The tender was won by its only bidder: an event production company specialising in sound and video. Within a discourse of defending the “eclectic and ethnographic” character of the site, the bid stipulated the provision of ten kiosks equipped for serving up quick meals, each reflecting a different national cuisine. The central area of the square was to function “as in Colombo [one of Portugal’s largest shopping centres] or as in any other shopping centre of this type”, the concession director stated in the Público newspaper. “To get the project running,” he continued, “we have contacted over 60 associations and communities and also talked to various embassies”. 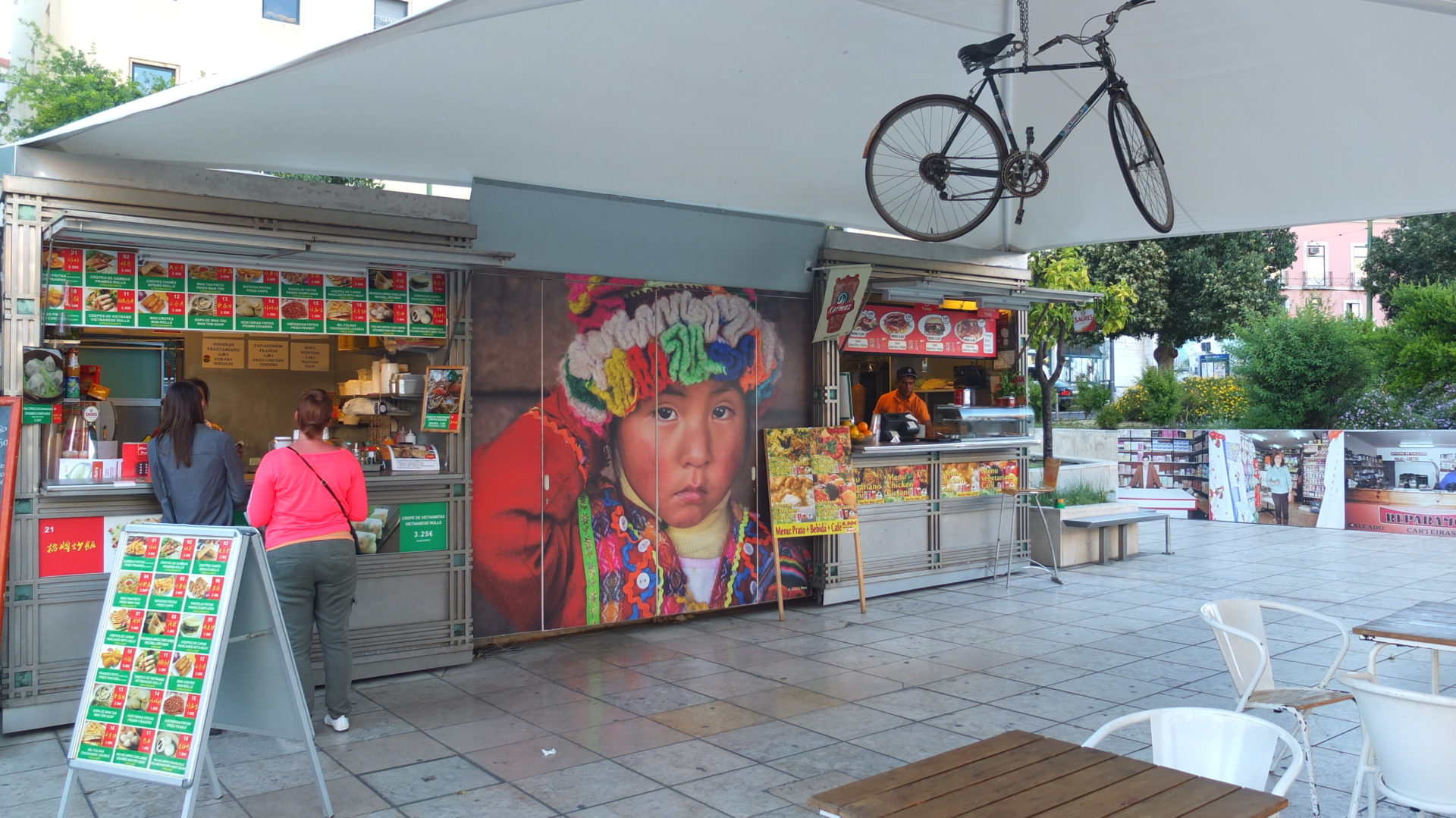 The stands, open at the weekend for the Fusion Market, are mainly taken up by outlets offering creative objects, end-of-collection brand clothing, vintage clothing, organic produce and similar types of products; all totally out of sync with the otherwise prevailing local dynamics. The kiosks open during the week were leased to different types of food providers – pizza, gourmet hamburgers, sushi, Brazilian gastronomy (…) – in a fairly lame attempt at providing a multicultural portrait, neither representing the locally prevailing type of commerce nor enabling local business participation. The refurbishment of the square, commissioned from CHP Arquitectos by the concession holder, includes the installation of generic shadow casting structures as its main feature. More recently, an artificial grass covering was laid out in between the different café terraces along with some panels featuring photographs of the small local stores, whose owners and clients, in all likelihood, are unable to sample the cocktails served up there at €6 apiece. 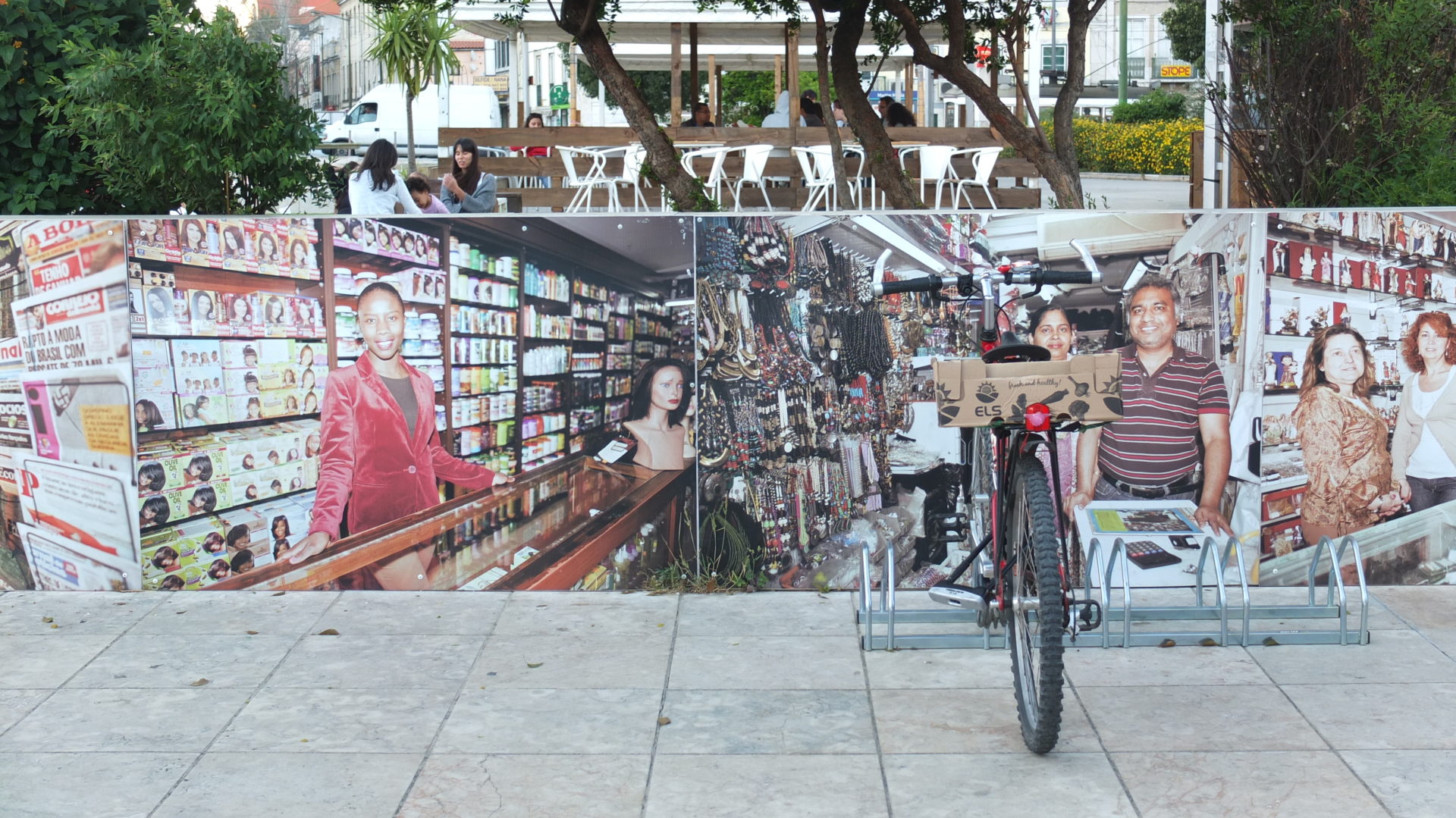 The media have enthusiastically covered this operation and correspondingly characterised itas an example of “returning this space to the city”. Clearly, the local residents and small business owners are not included, not even as consumers. The local community finds neither the space nor the purchasing power to engage in the economy that is being generated in the square. The space has been “returned” to a minority with the appropriate level of purchasing power, who drop in on the location on an occasional basis.

What has happened in Martim Moniz Square – now designated Dragon Square by the concession holder – fits in with a series of recent interventions in the historic centre of Lisbon which correlate with the sharp rise in tourism and its associated industries. Similarly it fits in with the generalised acceptance of regeneration driven by gentrification generator mechanisms such as entrepreneurialism and the so called “creative industries”. Even while not garnering any support from residents, workers or traditional users of the square (and not even targeting such communities) these operations are whitewashed and justified by the fact that they improve the area from the perspective of an elite endowed with the necessary purchasing power to enjoy the improvements. It is for them that the entire initiative was really destined and deemed appropriate. 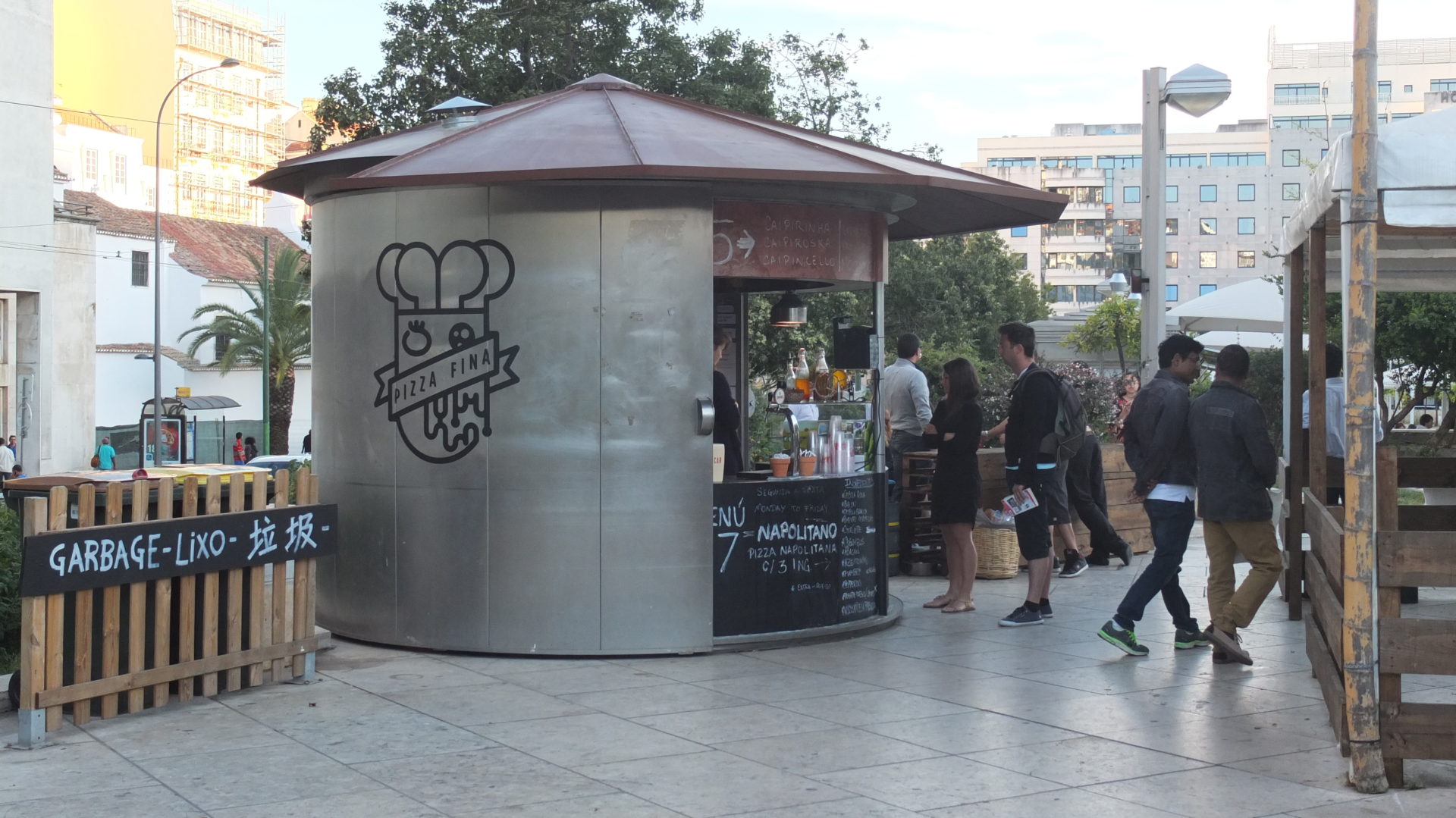 Delegating all responsibilities to a private company denies Lisbon and the multitude of ordinary Lisboans the opportunity for a real, integrative and responsible regeneration. A collective project of regeneration could leverage the city’s relative lag in relation to other old European cities and could likewise meet the true needs and opportunities of the locally present population by driving local economic revitalisation. Instead Martim Moniz’s transformation is the responsibility of a private company with a solely promotional discourse that only superficially reaches out to meet the objectives and intentions of public institutions.

Unfortunately, Martim Moniz is far from a unique case. This phenomenon extends along entire streets, centuries old public facilities and is also specifically manifested in the gutting of the Pombaline Downtown area due to the irresponsible licensing of an absurd number of hotels. The conversion is underway. Let Lisbon be warned. 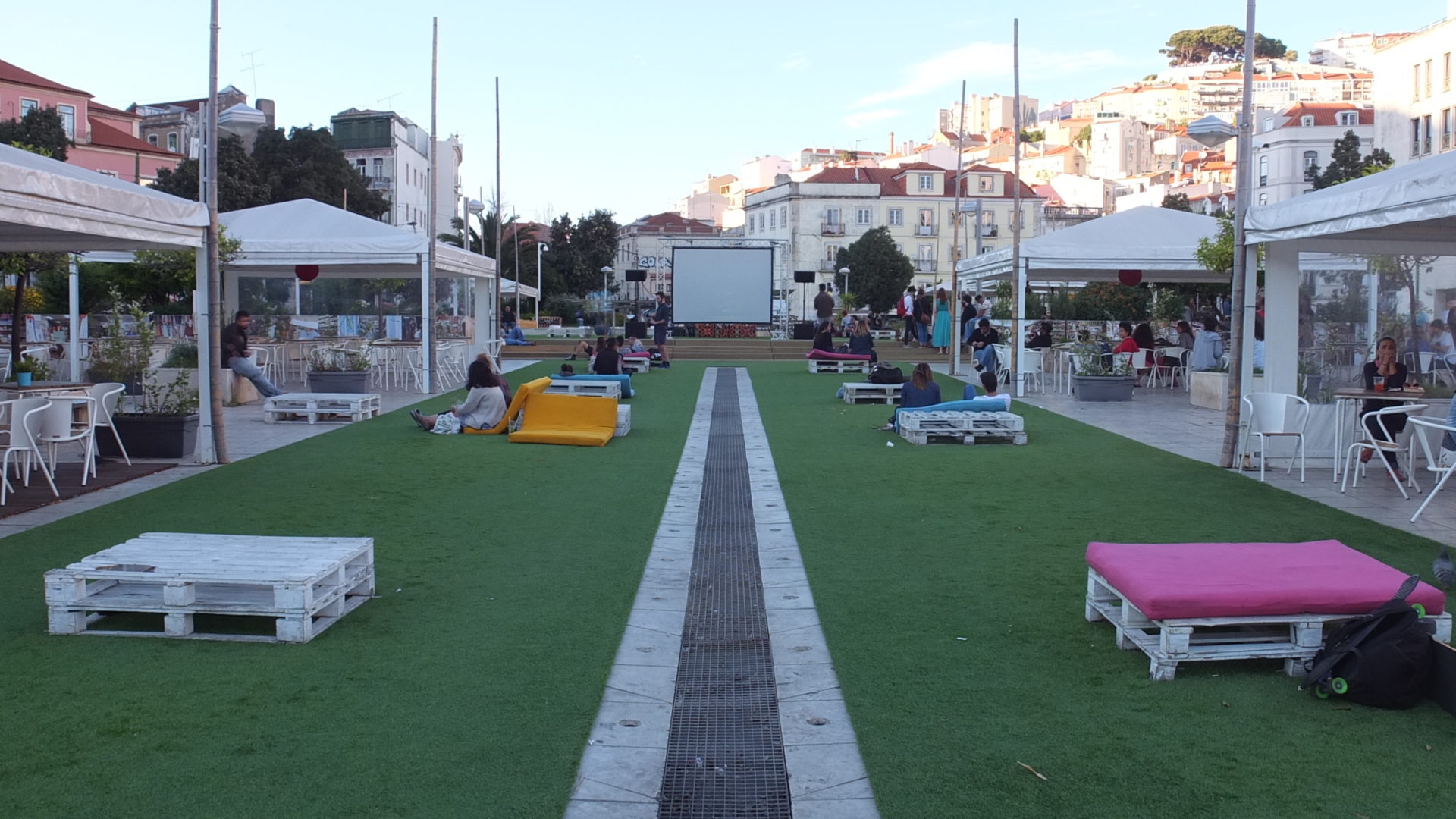 Rita Aguiar Rodrigues
Rita Aguiar Rodrigues is a Lisbon-based architect. She holds an MA in Architecture from Universidade Autónoma de Lisboa and she recently worked in São Paulo at MMBB Arquitetos. In addition to her freelance work, Rita is an associate architect at ateliermob.