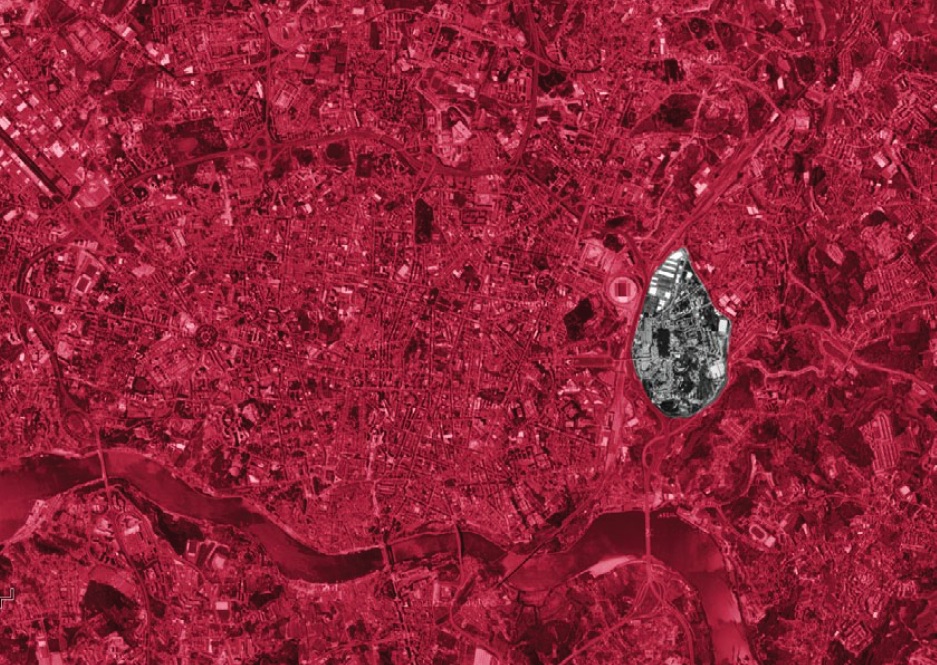 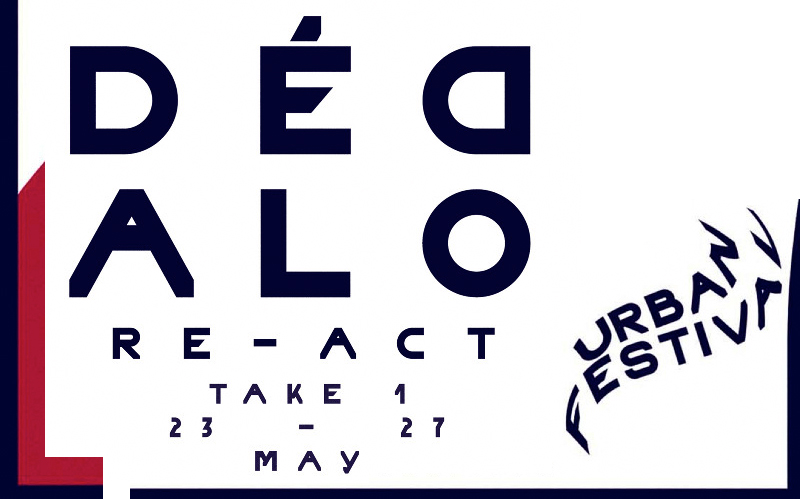 From 22nd to the 27th of May Failed Architecture went to Porto, Portugal and guided several workshops and lectures as part of the RE-ACT Urban Festival, organized by the Portuguese academic architecture journal Dédalo. This publication was established as a critical platform for architectural debate in Portugal and in particular seeks to build connections with other disciplines, such as the arts and social sciences. For this year’s Urban Festival Dédalo developed a specific focus on the Campanhã neighborhood in the east of Porto, which they perceive as a forgotten and neglected part of the city. In order to expose the potential of Campanhã and revive innovative thinking on the area, Dédalo brought artists, architects and urbanists from around Europe to Porto to share their expertise. Through careful analysis, explorative walks, collective debates and small-scale installations it was aimed to further develop a common understanding of the problems and potentialities of the area. Together with Bernardo Amaral, an architect from Porto, Failed Architecture guided one group in actively engaging with an analysis of the area and helped them articulating different possible trajectories for local urban transformations.

The specific focus area of the RE-ACT urban festival.

The city of Porto is the central nucleus of a large metropolitan area in northern Portugal, characterized by inner-city decline and expanding suburbs. Rapid industrialization started at the end of the 19th century, in particular in the Campanhã Valley due to its proximity to both railway connections and agricultural areas. As a consequence, large groups of the working class moved to the area, resulting in major housing problems. In the 60s large scale social housing programs were initiated to address these issues, although limited efforts were made to maintain the estates and the surrounding areas. As the more affluent inhabitants and heavy industries started to leave predominantly urban areas like Campanhã soon after, the physical and social structure of the neighborhood went into decline. Abandoned and decaying industrial heritage and grand villas, once property of wealthy families, are silent witnesses of this history. With less jobs available, crime and other urban problems arose. This resulted in the strong social stigmatization of in particular the housing estates, causing segregation with the other parts of the neighborhood. In a rather drastic attempt to curb those problems, abandoned buildings as well as some inhabited estates were simply demolished by the municipality, leaving large vacant plots of land throughout the neighborhood. Another issue that heavily impacted Campanhã in recent years is the continuous expansion of large scale infrastructure projects circumventing the neighborhood. Highways and (light)railways isolated the area from Porto’s urban fabric instead of offering the area useful connections. In talks with inhabitants, our group found out that the neighborhood feels like they have been left on a deserted island, disconnected from the rest of the city both physically as well as socially. Even a recently built Calatrava-style bridge in the direction of Porto’s city center is not perceived as a binding element by the neighborhood, as crossing it involves a long walk under a burning sun. 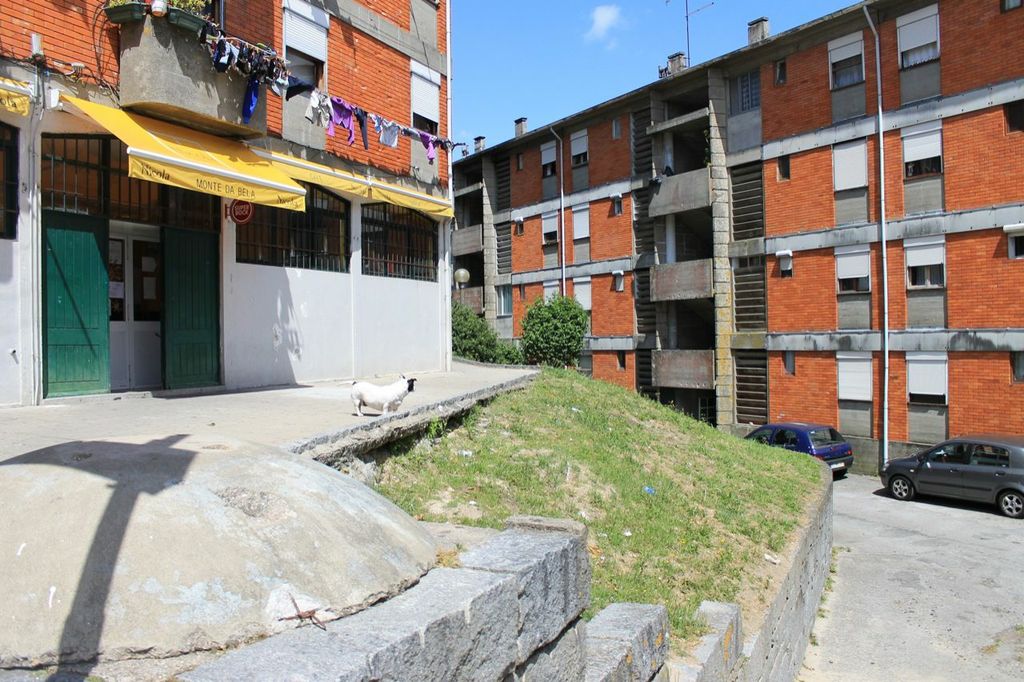 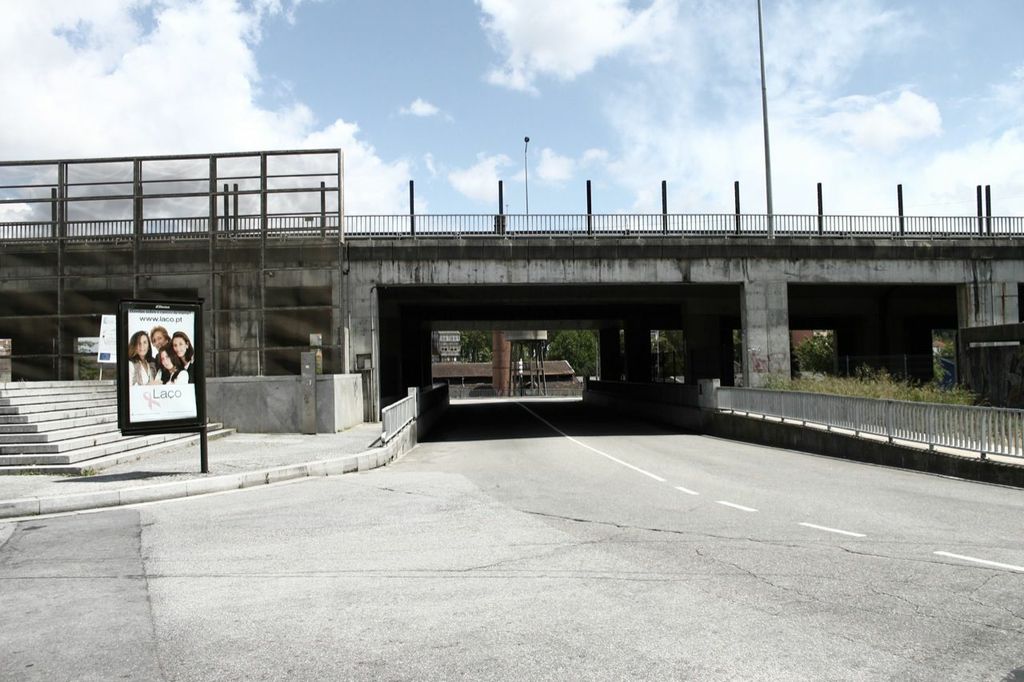 An elevated highway in Campanhã, leaving only a small, dark underpass as a connection with the rest of Porto. 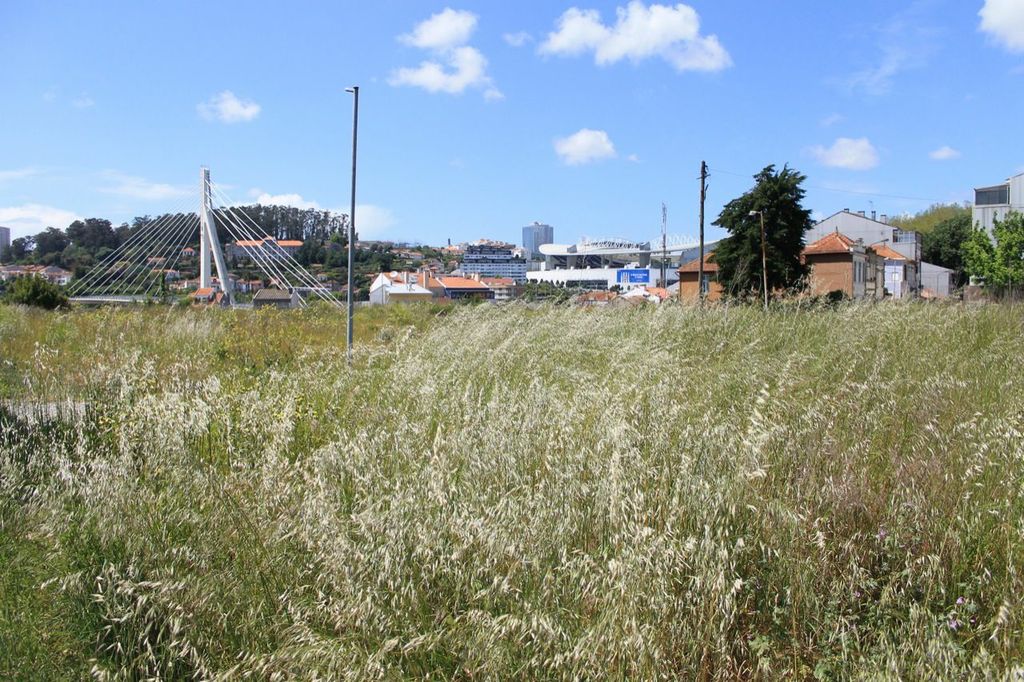 A piece of vacant land where once a housing estate was located.

Isolation, segregation and abandoned urban space affecting Campanhã around the Corujeira Square were the main focus issues for possible interventions for the group supervised by Failed Architecture. In order to address the isolation and social disconnection the group’s proposal included the promotion of a more autonomous, collaborative and self-sustainable lifestyle. In this way the inhabitants of the area could collectively work on the identity of the neighborhood, making themselves more proud of the area, creating new forms of cohesion and attracting visitors from other parts of the city. The group furthermore saw an opportunity in the vacant plots of land, which could function as a starting point for the reactivation of the neighborhood. The final proposal was called ‘React Corujeira’, after the centrally located square in the neighborhood, and focuses on the creation of a new network of partners working on collective urban agriculture. It envisions the creation of collective gardens on the vacant plot of land 100 meters south of Corujeira Square and the establishment of a space on the same location where seeds, tools and knowledge could be shared among the inhabitants. In co-operation with the organic store on the Corujeira Square, already existing collective farming projects in the vicinity of Campanhã and participating inhabitants a market for local produce will be organized on the square. Finally, from this green transformation other green interventions could follow, as for example the creation of a shady pergola on the recently built bridge. All these interventions together would create new use of public space, new social relations, identities and networks and contribute to food supplies in an area particularly hard-hit by the current crisis and unemployment.

The timeline for future interventions in the neighborhood as presented by the group. 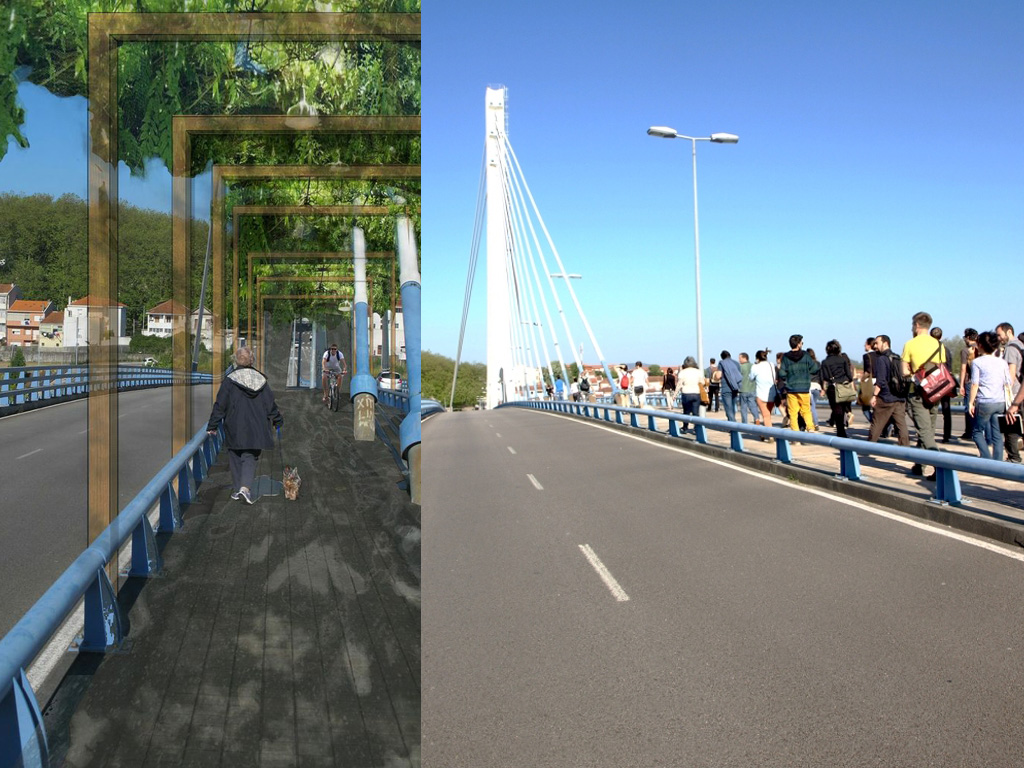 Participants of the RE-ACT urban festival walking on the new bridge towards Campanhã, for which the group proposed a shady pergola. 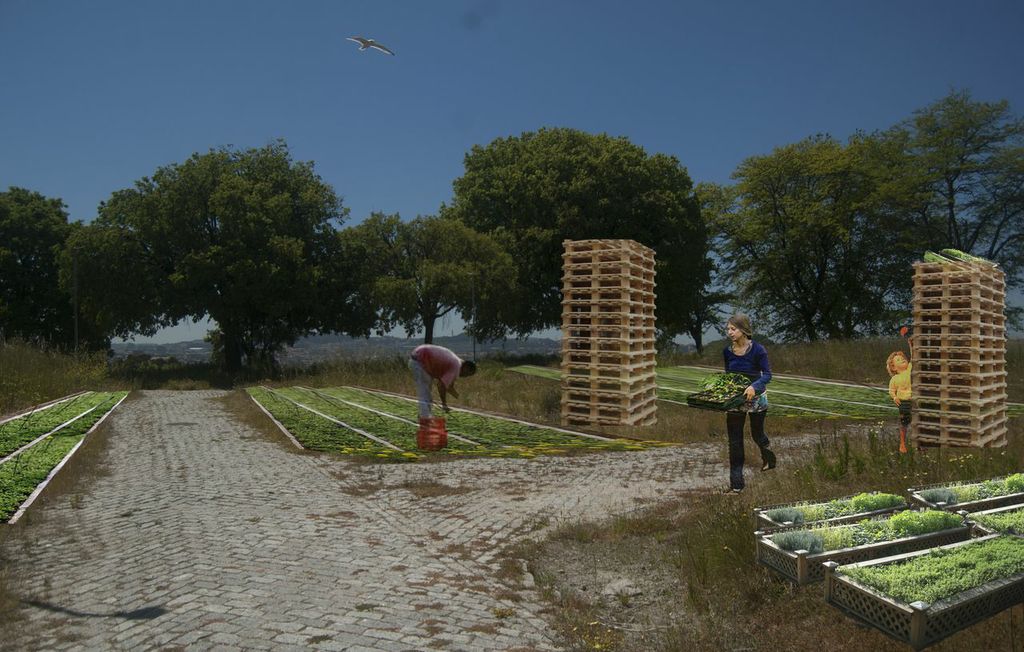 Small collective gardens on the vacant plot of land.

The proposal of the group was presented on the last day of the RE-ACT urban festival and raised an interesting debate among the participants of the festival on the limits and possible outcomes of the mentioned ideas. Groups guided by other architects, urbanists and spatial experts presented their analysis and proposals as well, often showing interesting applications of the tools offered by their supervisors. For example, MAP-IT (Belgium) used their accessible, easy-to-understand, low-tech but highly informative and clarifying toolbox in their workshop, in which participants analyze a particular (urban) area through a careful mapping process, somehow similar to the work of the Argentinean Iconoclasistas. The Espacialistas (literally the ‘Spatialists’) on the other hand captured their simple theatrical choreographies in urban space in photos, which provided insights into the functioning of space no statistics or usual analysis could ever offer. This wide range of different approaches contributed to making this well-organised and well-attended urban festival a highly interesting congregation of spatial experts, critically engaging themselves with Porto’s fragmented urban fabric. 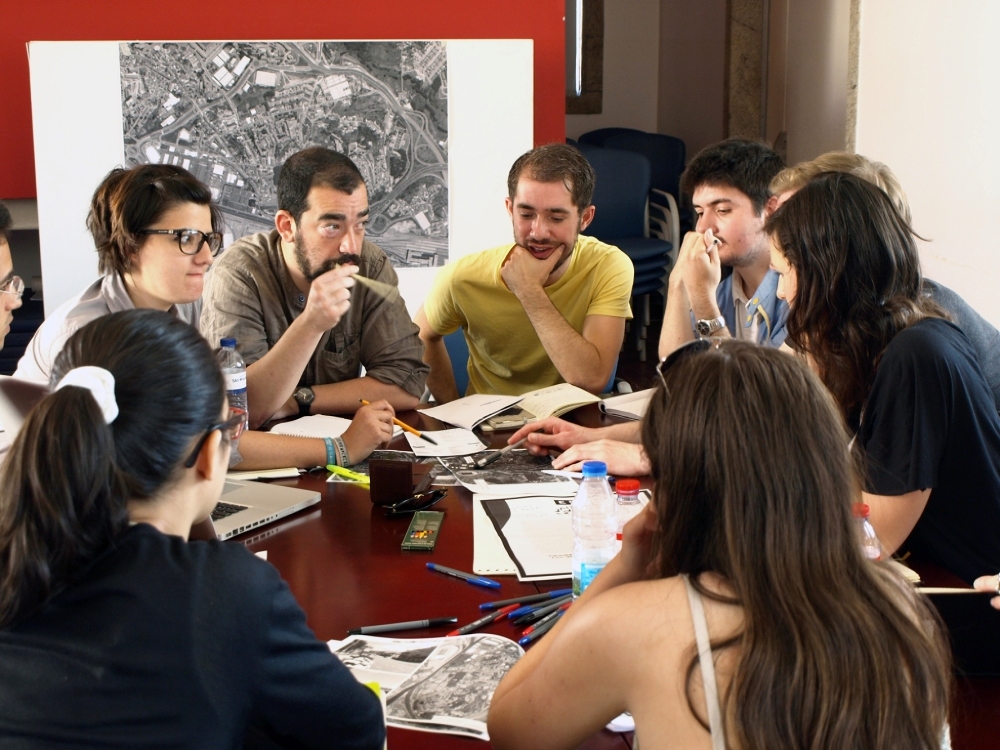 The group working with Bernardo Amaral and Failed Architecture.