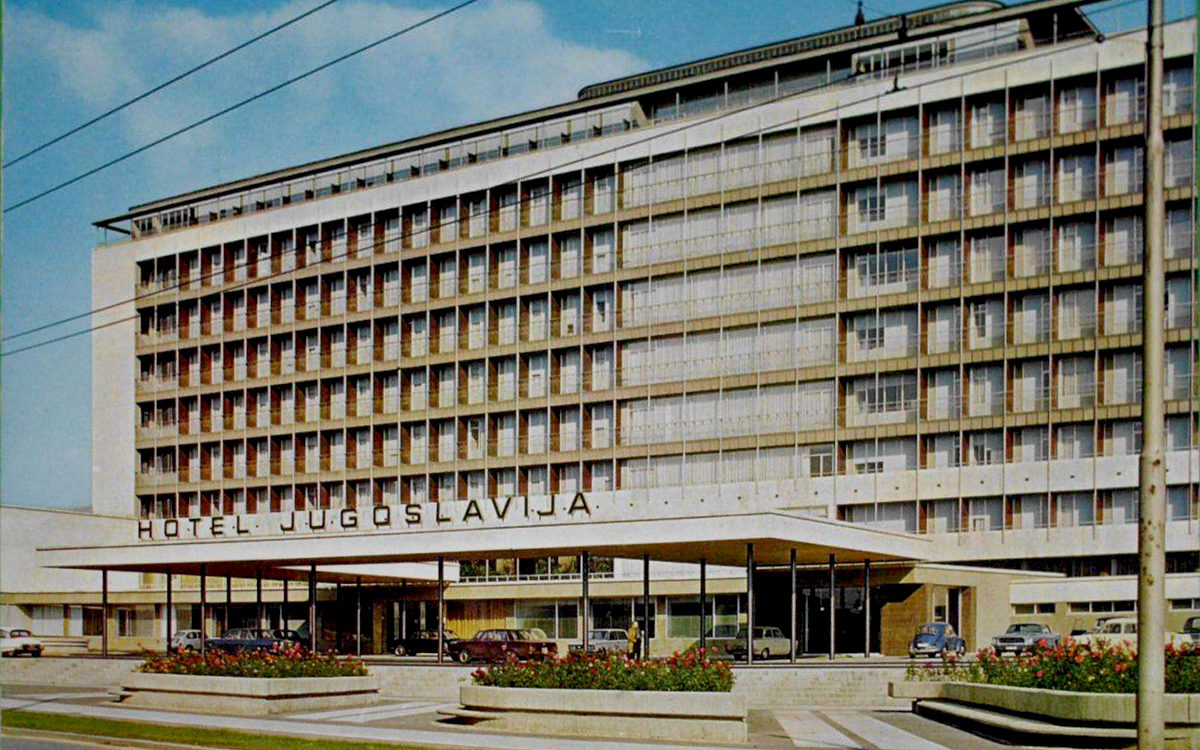 An exhibition on a historical hotel in Belgrade shows that while Serbia's current socio-political state is locked into history, the country has not yet found a way to deal with the past.

An eerie, abandoned building awaiting reconstruction today, the Hotel Jugoslavija was once considered the finest embodiment of the ideals of modern architecture in Novi Beograd. It was the biggest hotel in the Socialist Federal Republic of Yugoslavia (SFRY) when it opened in 1969. Its gradual collapse during the 1980s and 1990s, leading up to its final closure in 2000, marks different phases in the historical transformation of the region of former Yugoslavia. Greek investors purchased the hotel site in 2010. After rehabilitation is completed—a project worth more than 100 million euros—the hotel will become part of the luxury Kempinski chain. The redevelopment plan also includes a shopping mall and a 33-story residential tower. The current state of the building informs artist Mladen Bizumić’s approach to negotiating Serbian narratives of belonging and spaces of identity. His project exhibition Hotel Jugoslavija probes the potential of modern architectural heritage as Serbia continues its route towards European integration. 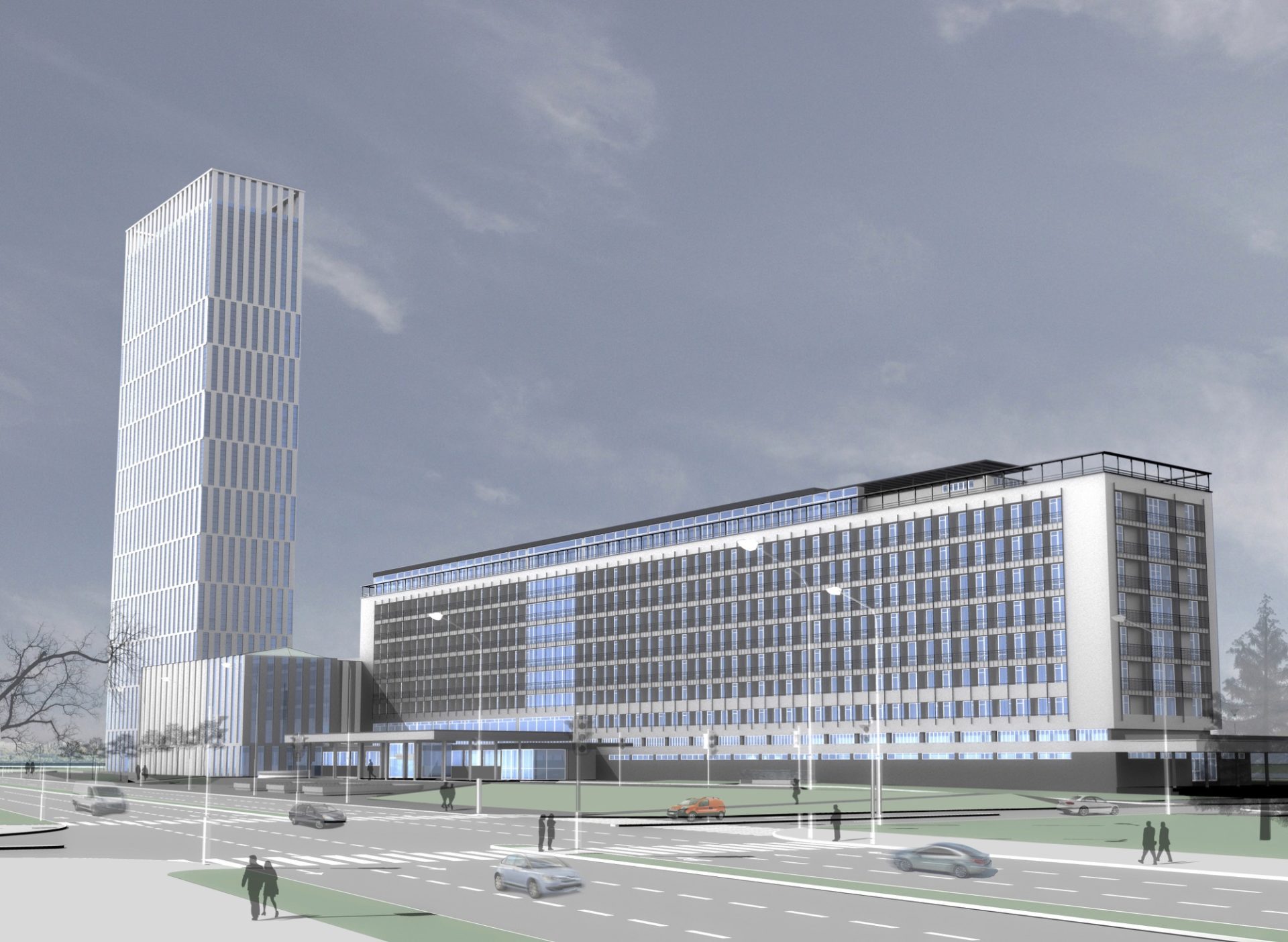 Rendering of the reconstruction plans for the hotel.

The Salon of the Museum of Contemporary Art in Belgrade hosted artist Mladen Bizumić’s debut solo exhibition in Belgrade and Serbia (30 March – 6 May 2012). Bizumić was born in Serbia, grew up in New Zealand, and is currently based in Vienna. He is a PhD candidate in Art Theory and Cultural Studies at the Akademie der bildenden Künste. The hotel is the focus of the exhibition narrative—its raison d’être. In certain respects, the exhibition Hotel Jugoslavija represents the idea of, the spectre of, the trace of the non-existent, or rather disrupted, system of values associated with the former Yugoslavia (the Socialist Federal Republic of Yugoslavia). It also becomes a dissection table for the dubious processes of the hyper-isolation of post-disintegration, post-conflict Serbian society. Bizumić transforms the already multiple meanings of the hotel and its curious collection of ‘historical’ objects whose archival facticity or inherent value unfolds beyond mere mementos of a past time sealed off from the present—an emission of absence in an open, mostly white, haunted exhibition territory which is over-packed with significance.

Installation view at Salon of MoCAB.

It seems that Bizumić and curator Branislav Dimitrijević proclaimed the exhibition space to be in a state of ‘becoming’—a reliquary of both the material traces of the physical structures installed and the context-related relations in motion with a self-reflective, process-oriented, critical potentiality. From this perspective, the processual, relational dynamics of artistic involvement and curatorial activity allow for the exhibition Hotel Jugoslavija to become a trans-professional space of mediation, social negotiation and analytical dispute where the positions of both the artist and the curator are visible. And, as such, the exhibition can be perceived as a temporary constellation where spatially and temporally structured layers of meaning compete with each other. For, in this particular case, the dramaturgy of the exhibition mediates upon the tensions between memory, history and imagination. Also, exhibition visitors are collaborative auteurs who establish different references—a series of off-centers—through which the exhibition acquires a multi-tonal range of meaning corresponding to a recognisable temporary reality. 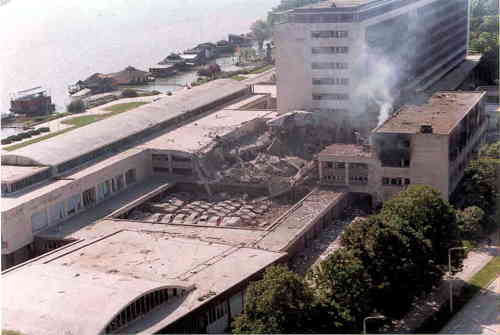 The hotel after the NATO bombings in 1999.

Once the largest in the SFR of Yugoslavia, the hotel with its seven-story main complex and ancillary buildings is an uncompromising example of modernist architecture. It was designed by Mladen Kauzlarić, Lavslav Horvat and Kazimir Ostrogović, the famous architects of the Zagreb school of modernism, in 1947. Construction work began in Novi Beograd in the early 1960s according to Horvat’s modified project. The hotel opened in 1969. The unfortunate history of the Hotel Jugoslavija is marked by its gradual economic collapse through the 1970s, 1980s and 1990s. The west wing of the hotel was hit by two missiles during the 1999 NATO bombing of Serbia, upon which it was closed and later privatised to be reconstructed and redeveloped.

Bizumić’s project engages with diverse media (photography, sculpture, video, sound fragments) which render the exhibition site a repository for restructured parallel histories with relation to both the archives and future visions for the hotel. The installations combine analogue photographs, decommissioned mirrors, lamps and chandeliers, found pieces of furniture, trolleys, found printed matter including receipts and ‘Do Not Disturb’ door hangers as well as an old faded photograph of the hotel. The exhibition also features a video film (see below) developed in collaboration with artist Jim Speers about the current status of the hotel building and its immediate surroundings. 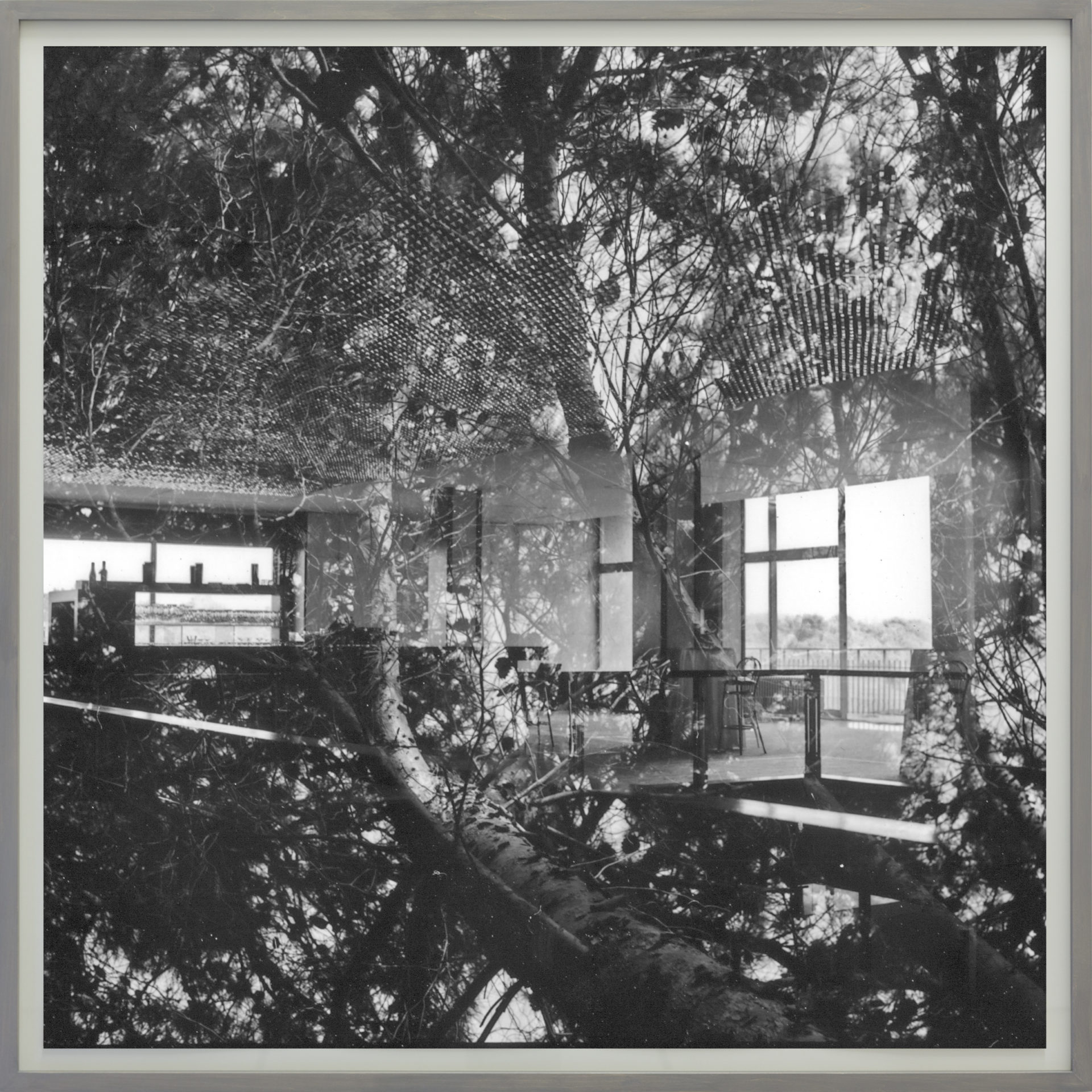 In deciding to make an exhibition around an assemblage of different objects brought from the hotel’s abandoned site, Bizumić confronts the viewers with their own practices of discrimination and (re)valuation of these ‘archival’ fragments—their historical and affective signifying potential (re)activated and informed by an intersubjective encounter between the viewer and the object(s). In this view, Bizumić’s artistic apparatus is inherently relational, producing what Nicolas Bourriaud refers to as ‘specific sociability’ and ‘arena of exchange’. Indeed, the ghostly quality of the assembled objects triggers an inescapable and continuing process of memory negotiation on the part of the exhibition visitor. Further, such participatory model of aesthetic experience not only emancipates the viewer but also generates trans-individual social bonds associated with singular aesthetic experiences within a social interstice. And, in effect, the status of the artwork evolves along with and through such intersubjective trajectories and random states of encounter.

Installation view at Salon of MoCAB.

As such, cut-outs and fragments of different material collected, arranged, intervened upon, indexed, included and/or excluded constitute a kind of added memory—a biography of sorts with all its dreams, failings and idiosyncrasies—which occupies different corners around the exhibition space. Ultimately, Hotel Jugoslavija is a multi-layered exhibition which explores the boundaries between history and the reality of today. It reveals how the spectres of the past still mark our lives and determine our actions and ways of thinking in the present. It subjects cultural and historical places, events and people to close scrutiny in a way that is challengingly ambiguous and razor-sharp at the same time. It is in a sense where Serbia is at. The project shows that while the current socio-political condition is locked into history, the country has not yet found a way to deal with the past or relate to its revenants.

What is the Legacy of the Watergate Hotel?