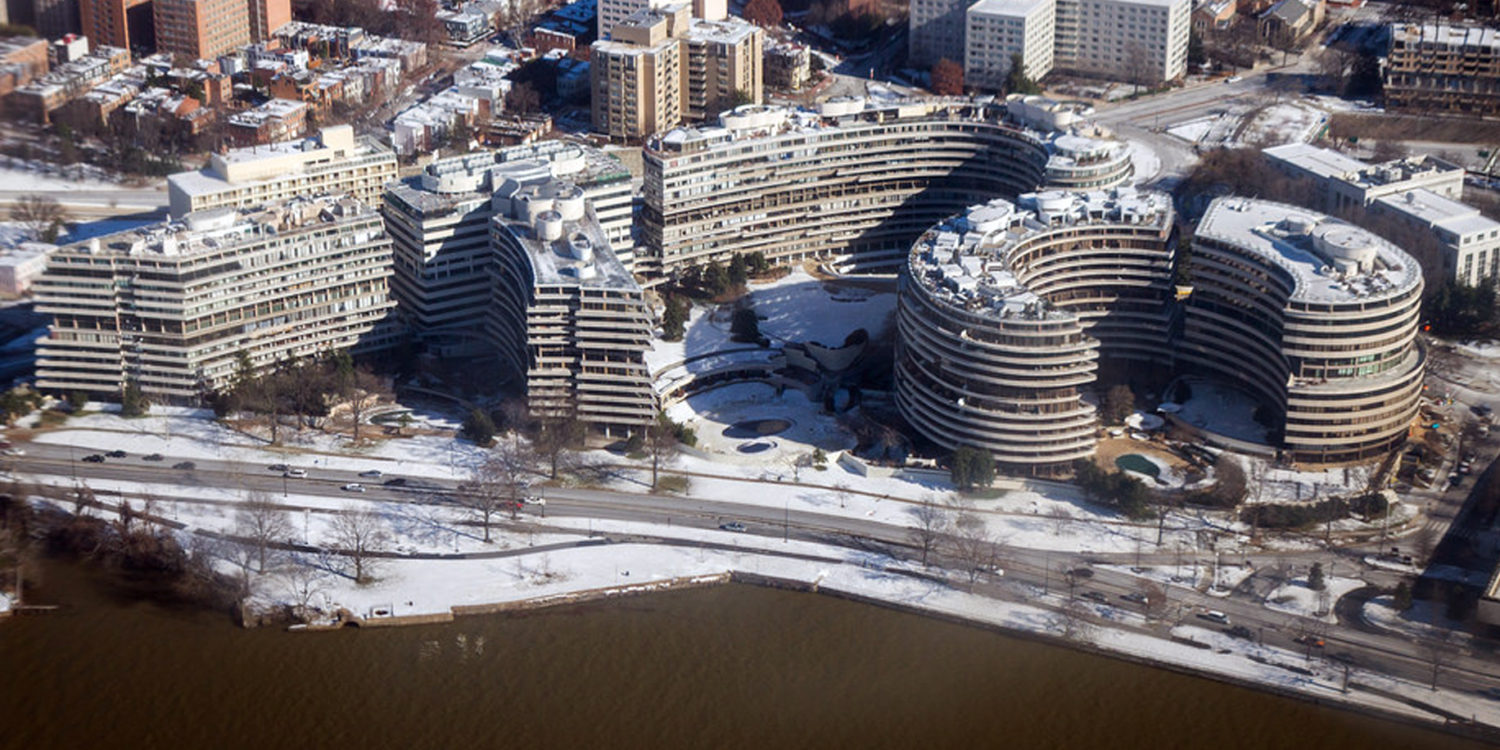 What is the Legacy of the Watergate Hotel?

The Watergate, the site of a now historic scandal, is in trouble. Closed for almost a decade, the building has a lesson to teach about the price of legacy, one that both feeds and starves.

Forty years ago the Watergate Complex housed a scandal that led to first and only resignation of a United States President, Richard Nixon. The abbreviated version is that Nixon used his powers of office to spy on his rival party’s headquarters, using taxpayer resources to do so. It was an act of unnecessary paranoia with extremely litigious consequences. Labeled the “Watergate Scandal”, the event inspired news afterwards to have the suffix “gate” added to it when the result is a flashy, public humiliation. So large was this scandal that its resonance has shaped modern media, particularly in the US. Though strangely the scandal might have even affected the architecture of the Watergate itself. 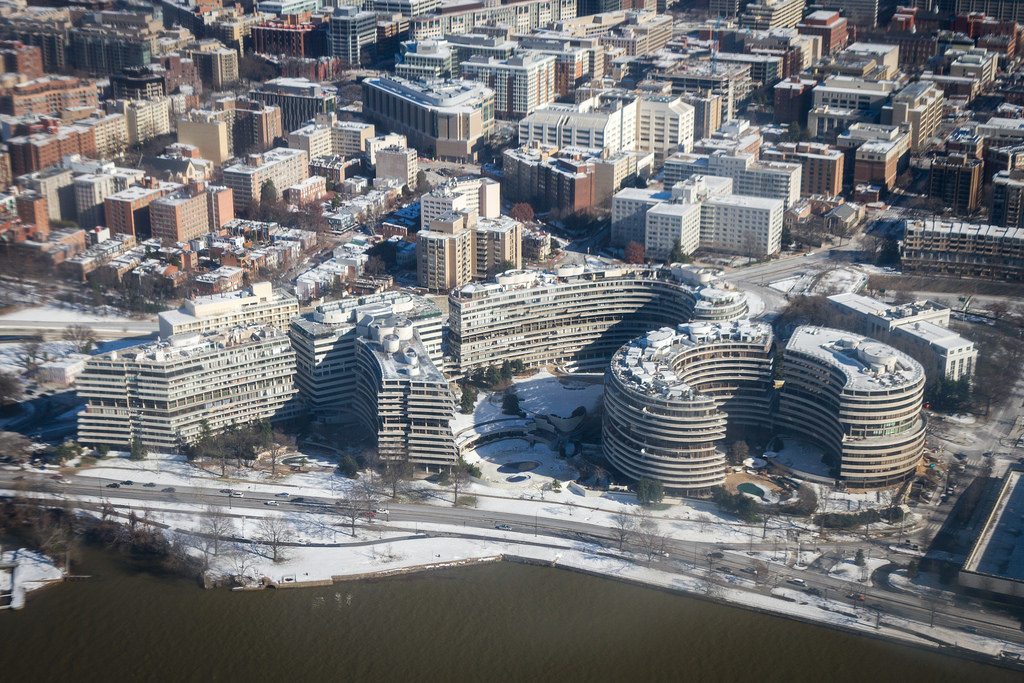 Follow the Money
While the scandal of course did not change the physical characteristics of the building, it did change the way that architecture was perceived. Prior to the scandal, the Watergate was one of the most fashionable hotels in Washington. Afterwards, it became a symbol for the disillusion of federal power. A huge, glaring sign that nobility and politics are two different creatures, as they ever were.

The Watergate Hotel is part of the Watergate Complex, which holds an office building and three apartment buildings (in addition to the hotel). Holding in total 10 acres directly on the Potomac River. As a specimen of architecture, it’s of the era of 1960s Washington DC: sweeping and modern, with just a hint of the Brutalist style that would become synonymous with the downtown federal buildings. In the spring, the white concrete contrasts against the blue river and pink cherry blossoms make the whole area look like a pristine postcard. Yet like many things in Washington, the story behind the clean precision was frustrating, long and expensive. 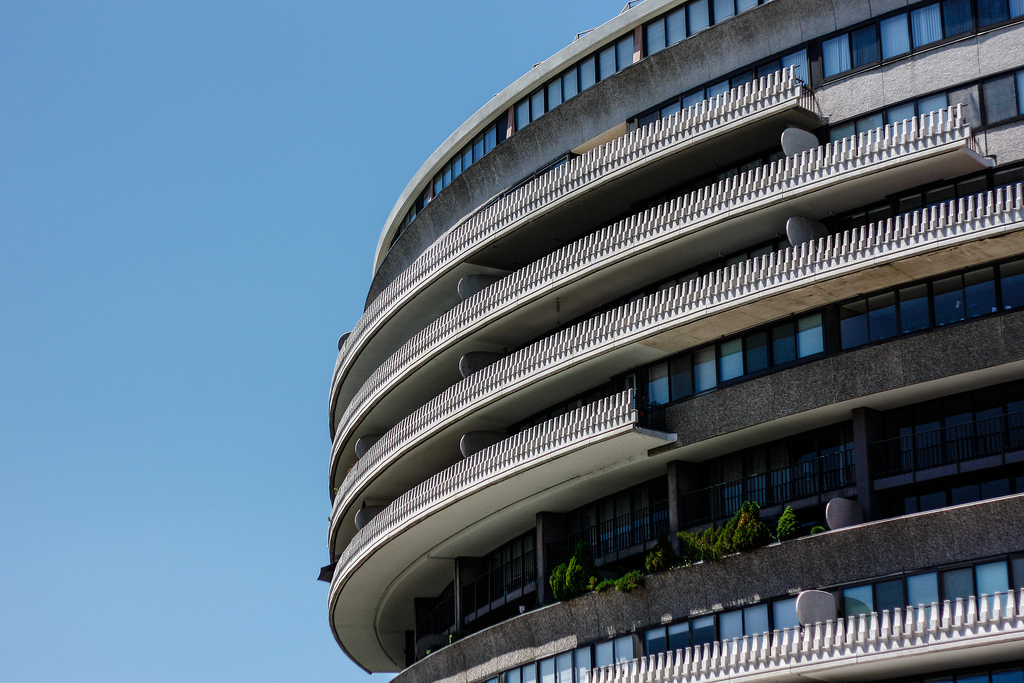 Initial construction for the complex was marred with legal red tape and delays until its completion in 1971. After the scandal was discovered a year later, the hotel survived on the same novelty which perpetuates the Willard Hotel (where the term ‘Lobbyist’ was rumoured to have begun for US politics) and Ford’s Theatre (site of the Lincoln assassination). It was the homebase of colossal hubris, and therefore appealing anyone who likes to watch the mighty fall.

But by the mid-eighties, the scandal had lost some of its punch to Reaganite economic policies. The notion of a singular governmental power (which ironically Nixon had come to represent) was being exchanged for contractors carrying out actions on behalf of the government. This was done under the pretext of saving money for the taxpayer, though with the actual result of removing federal culpability. 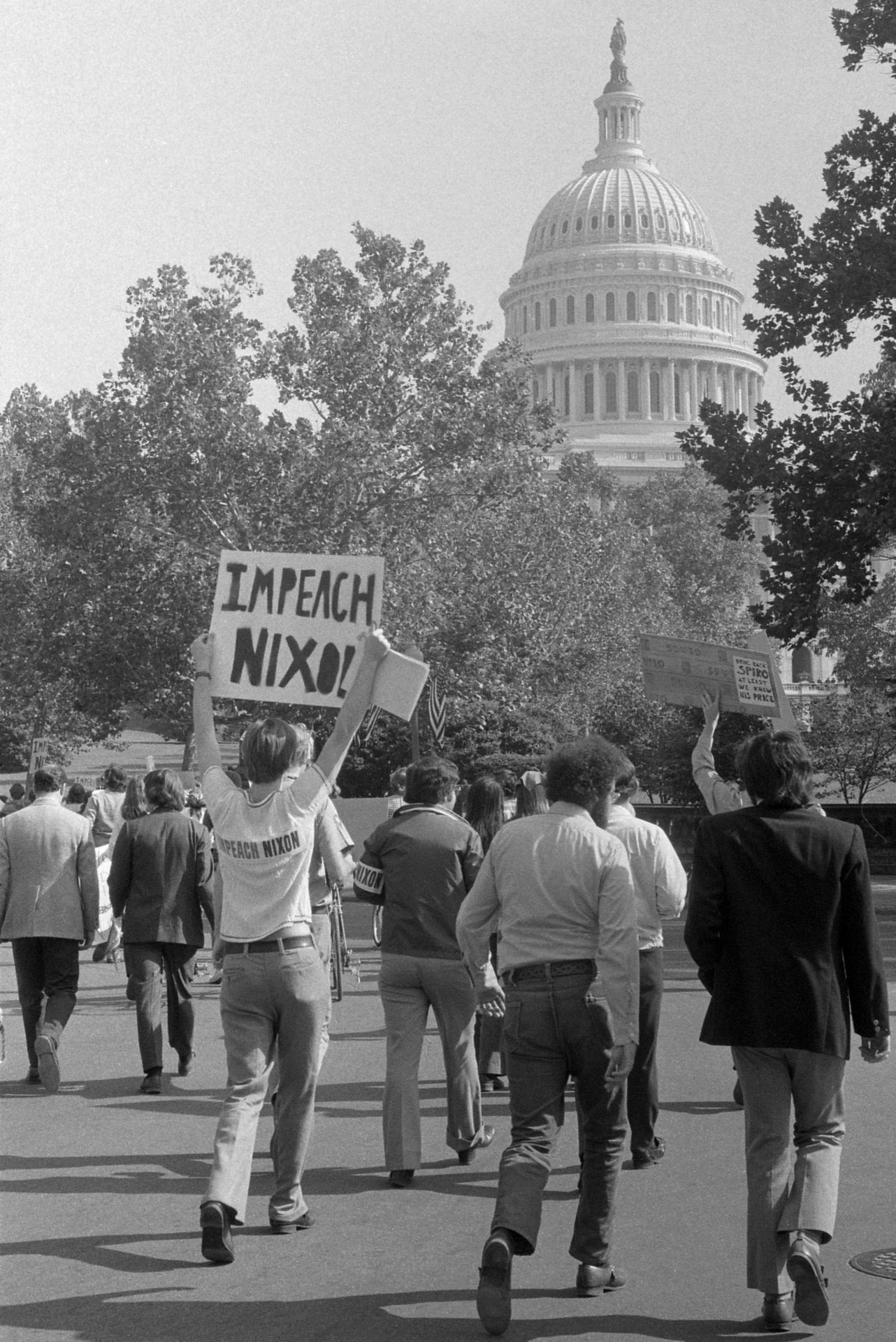 Reagan sought to rebrand the Republican party: replacing the Watergate imposed persona of Nixon’s paranoid neurotic with the grandfatherly businessman he presented. As far as the Watergate was concerned, while “Big Government” waned, so did the public interest in the site, both as symbol and as architecture.

The hotel changed owners several times from the 1980s on. In 2007, the building was shut down for a proposed $170 million renovation. When the remodeling plans fell through and the hotel sat empty until Euro Capital Properties bought it for $45 million in 2010. The new owners announced they would continue the renovation work, albeit for a smaller price tag of $85 million. 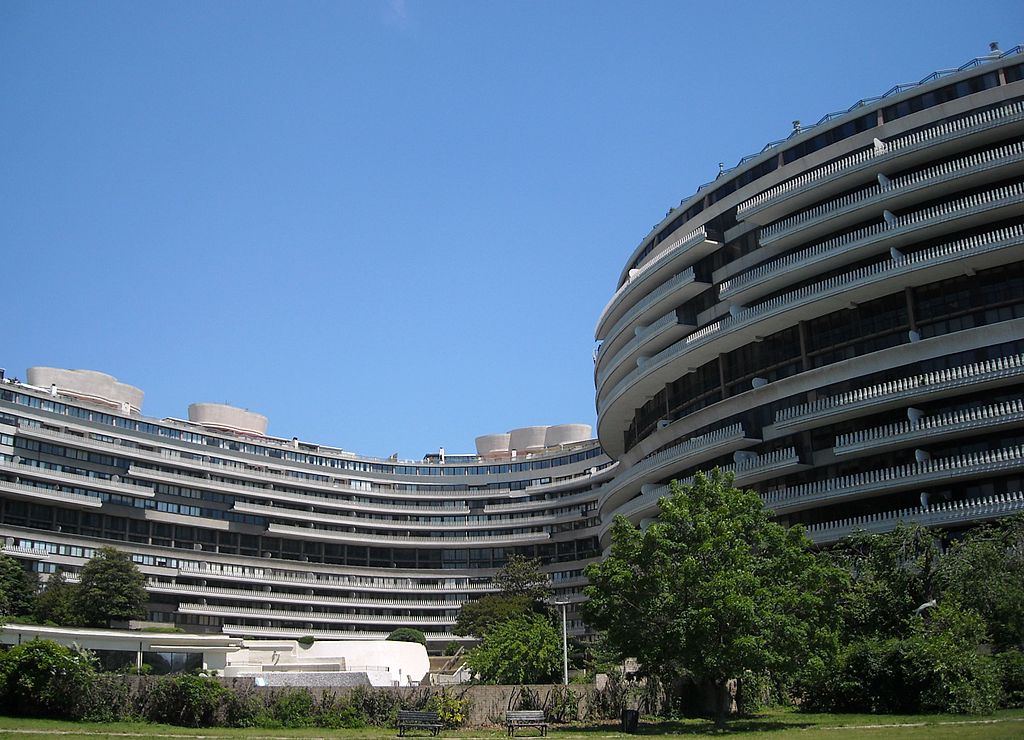 Odd Ducks and Lame Ducks
As an architectural typology, the transitional elements of the Watergate Hotel makes it a difficult candidate for preservation. It doesn’t have the razor sharp elegance of the Kennedy Center (it’s closest neighbor), but neither does it garner the general hate shoved at DC’s more clearly defined Brutalist structures (such as the former FBI Building). Indeed as DC grows ever more into a city of corporate glass and greenroofs, the Watergate Complex seems increasingly dissociated with its surroundings and without benefit of extremity. Not different enough to be popular. Not popular enough to be different.

Perhaps the solutions for the Watergate Hotel’s problems would be simpler if the building was smaller. It’s somewhat surprising given how difficult the past 10 years have been for the hotel that the apartments on the other side of the complex are doing fairly well. 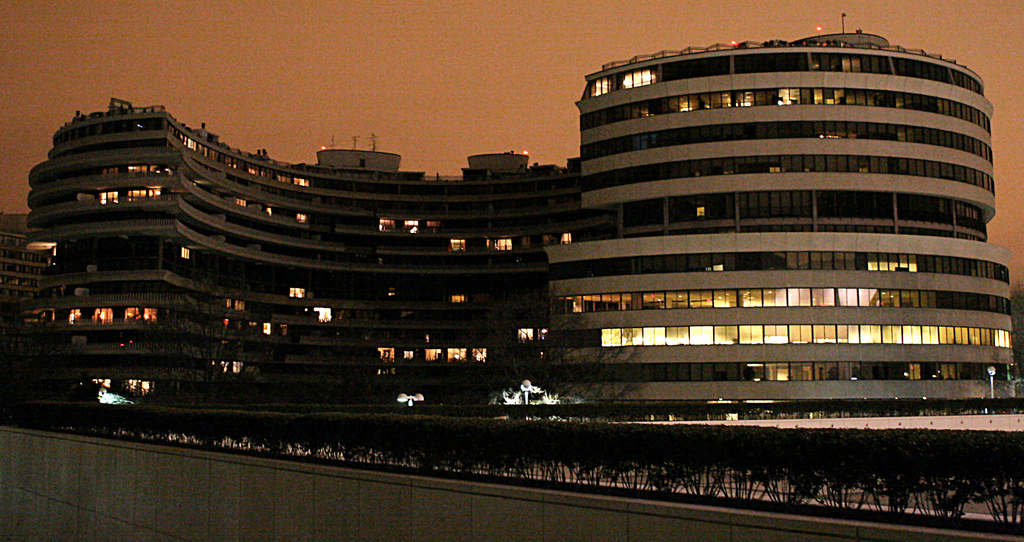 Arguably the longevity of the apartment’s financial success could be a nod to the rising cost of rent and the management’s decision to keep the units reasonably priced. Though public inaccessibility might be another reason why one element succeeds while the other struggles. Apartments have different objectives than hotels, where hotels thrive on fame and allowing the public to access that fame briefly, apartments wish for dignified removal. When the public persona of the Watergate scandal began to fade, it let the residents live in peace, even if at the cost of the other half’s survival. As for now the complex seems to be two parts of one unusual body.

In 2013, the hotel’s optimistic owner, Jacques Cohen, enthusiastically announced that the work would be complete by Spring 2014 and the opening would be celebrated with six liquor-licence carrying “Summer Gardens”. As Autumn creeps in, its to be noted the beer gardens never came to pass. 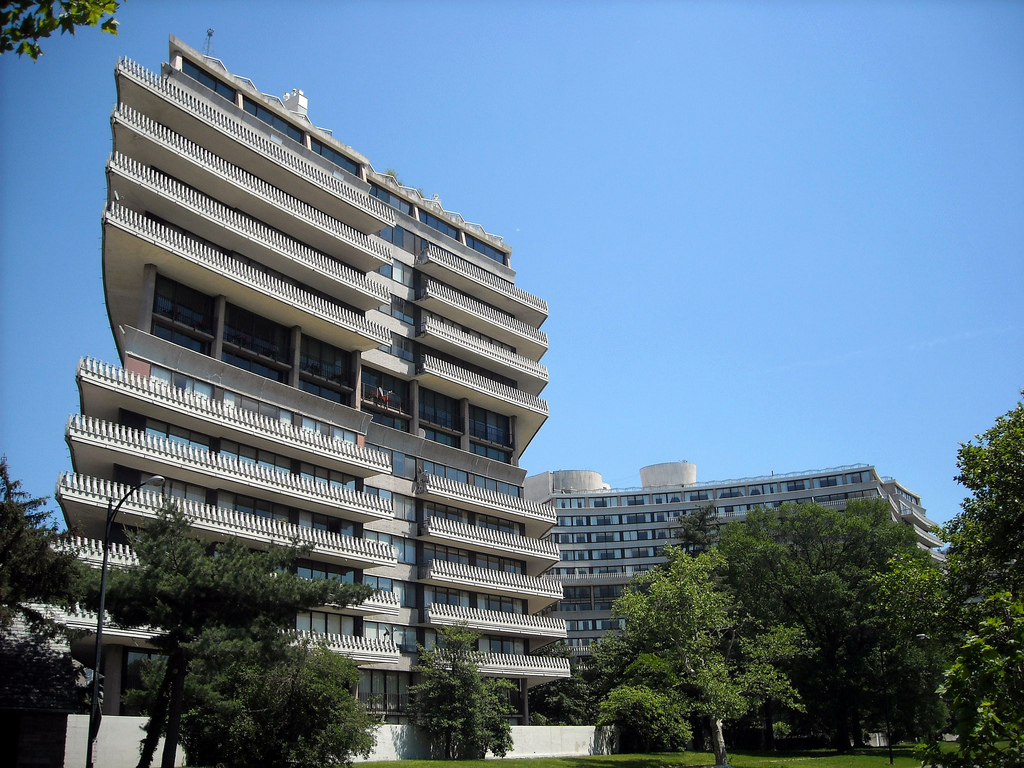 The Necessity of Gossip and Impolite Talk
As of September 2014, there is finally some work being done on the renovation under the direction of BBGM Architects, a boutique hospitality design firm. Although in previous interviews the designers at BBGM seem only to discuss the changes in rooms and bringing the building up to code, nothing about what the building means to the history of Washington. For their part, Euro Capital Properties seems to have learned from their mistake last year and now avoid speaking publicly regarding the renovation altogether.

But why try to renovate the hotel at all? Why not tear it down and let the apartments carry on the legacy themselves? The answer is both cultural and social. The Watergate, as a hotel, as a symbol and as something the public can access, has become a kind of persona-non-grata for Washington. Estranged from public attention due to history, legacy, embarrassment, but perhaps most poignantly, a short attention span. 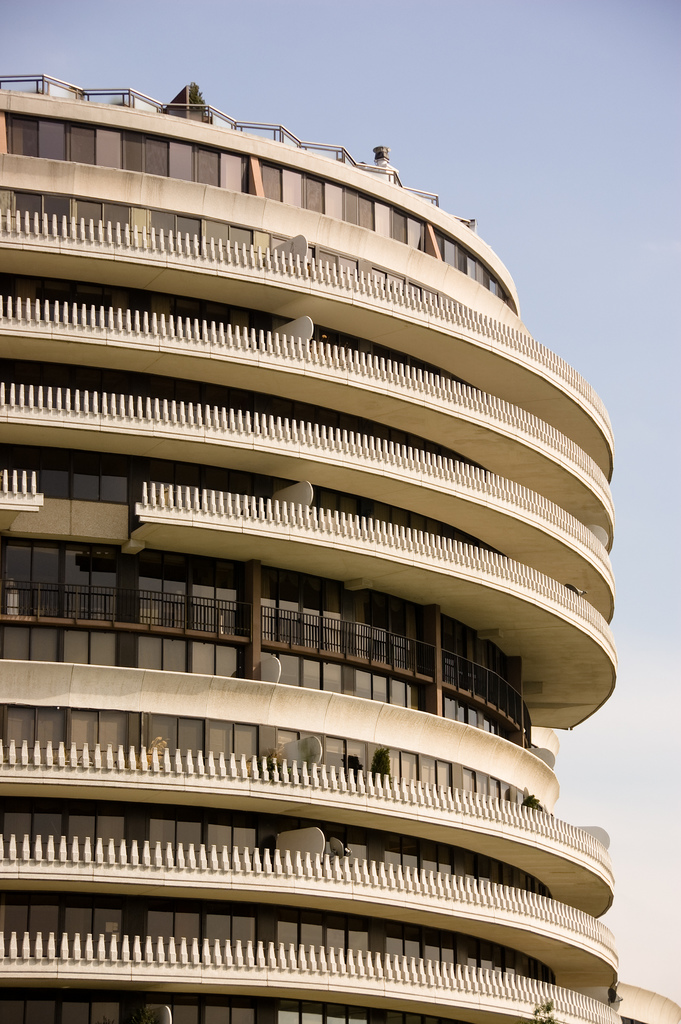 It speaks to the city’s culture of never discussing something everyone already knows. Resulting with the eventual successors forgetting as to why everyone knew about it in the first place. The lack of interest in the Watergate’s architectural significance and renovation problems shows a level of cynicism that is disappointing. The political betrayal that the Watergate symbolizes has had farther reaching consequences both politically and socially than any other of its age. Are these moments so easily forgotten? Apparently so.

Ultimately what the hotel asks, is when does something go from being “old news” to recent history, and when should the history be preserved? The Watergate Hotel could be the prime example of beginning to accept political history and agenda as complex things, not just as a shell to be filled and occasionally replaced. It is the hotel’s public accessibility which could begin the discourse. Legacy is a beast. If it is only ever treated as something to be feared or ignored then it will always be just that: an animal barely under control. 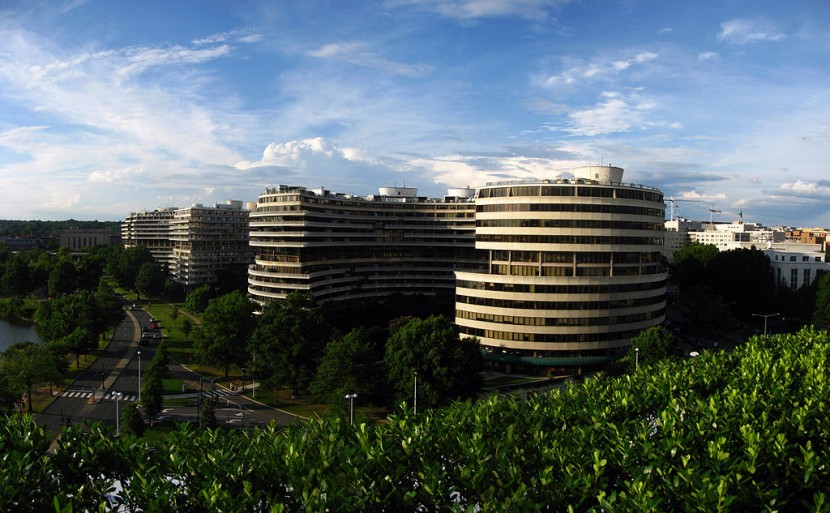 add comment
Philip Murphy
Excellent article except for the fact that the Watergate burglary took place at the office building not the hotel. Also, the photos are not of the hotel but of the entire Watergate complex, none of which is at any risk of being abandoned or torn down. Other than that, your article is accurate.
Related