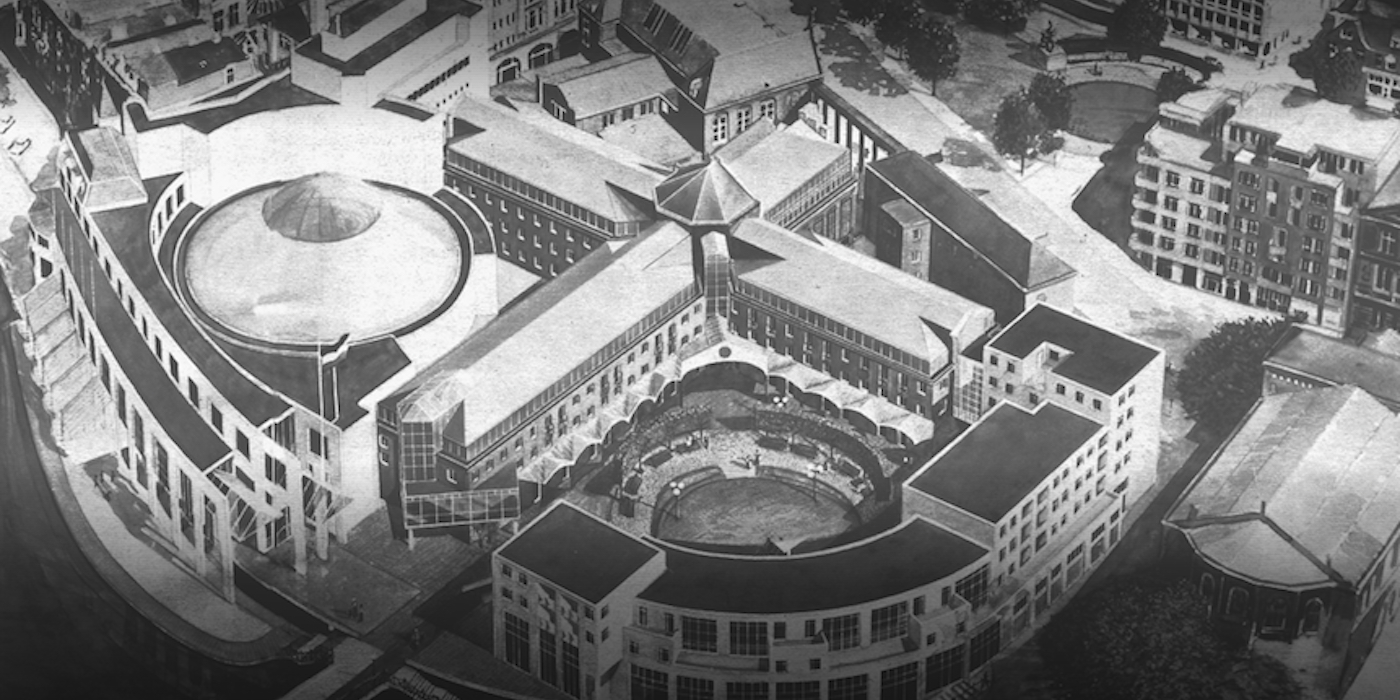 If Amsterdam is to preserve its unique mixed character against touristification, the city needs to defend itself again as it did during the 1970s.

The last few years have seen an erosion of the liveability of many European city centres. Residents and small businesses are rapidly being displaced by international mass tourism. With the worldwide growth of the middle class, the rise of low-cost airlines, and the irrepressible home-sharing economy, there is yet no end in sight to the growing tourist multitudes.

Amsterdam has been no exception to this process. Since the turn of the last century, tourists have been taking possession of the city’s canal belt, while hotels have sprung up like mushrooms. Only recently have policymakers begun to reverse some of their incentives to lure even more tourists to the Dutch capital. Still, a half-hearted ban on centrally-located hotels has proven unenforceable in practice, while it remains to be seen how effective the recent interdiction of even more tourist and souvenir shops will be. The mixed-use city centre is gradually degrading into a tourist reserve with unaffordable rental and hospitality prices. Local residents often feel powerless. They either complain bitterly about the increasing pressure, or seek the easy way out by renting out their flats themselves.

It seems as though Amsterdam has forgotten that not so long ago a hard battle was fought to defend its beloved city centre against a wholly different form of economic face-lifting. In the 1960s, urban planners assumed that the postindustrial economy, which was dominated by business, finance and consumerism, had to find its place and thrive in central urban spaces – effectively turning huge swaths of the city into modernist office blocks, shopping centres and motorways. From the early 1970s onwards critical citizens turned against the aims and methods of these large-scale urban renewal efforts. Aided by a troubled economy, they transformed their city centre into an affordable and inclusive place to live and work in. If some of this inclusiveness is to be preserved, Amsterdam needs to regain the ability to defend itself against the excesses of a capitalist economy. 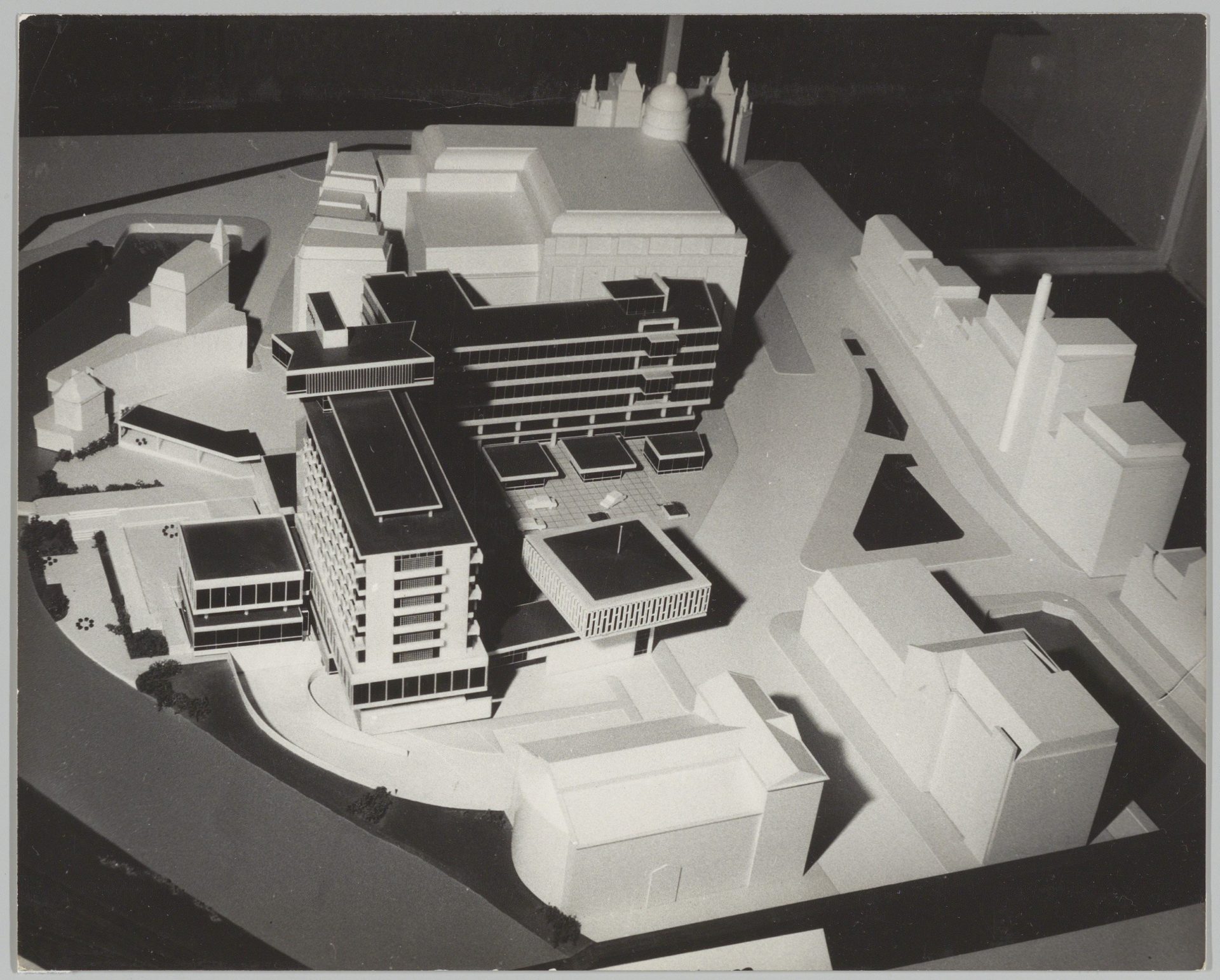 The original Bouwes scheme would have left Paradiso intact.

The end of Paradiso
The current hotel boom has its origins in the urban crisis of the 1970s, when tens of thousands of residents and hundreds of businesses left Amsterdam for the surrounding region. In a spiral of impoverishment and decay, the slowly increasing tourism trade was one of the few glimmers of hope for the city’s economic future. Local politicians were thus major advocates of more centrally-located hotel accommodation. As the number of hotels and catering establishments grew, Amsterdam’s central areas slowly but surely shifted from environments of production to environments of consumption, of which Baltimore’s Inner Harbor and Boston’s Faneuil Hall are early examples. Interlaced with postmodern nudges to culture and heritage, these spaces of consumption were seen as a new source of wealth, potentially rejuvenating the urban core. As a result, from the mid-1970s onwards investors and developers grew increasingly interested in the development of hotel accommodation.

A prime example of this rechannelling of property investments was a high-profile hotel plan near Leidseplein, put forward in several guises by hospitality entrepreneur Nicolaas Bouwes. If it were up to Bouwes, now-famous cultural venues such as Paradiso would have made way for the needs of mass tourism. After his initial plan was shelved, years of unsuccessful negotiations and rejected designs followed, ending in 1974 with a 49,000-square metre plan containing a 300-room hotel, car park, shops and restaurants. The complex, grouped in several blocks measuring 25 metres in height, was linked to shops in the adjacent P.C. Hooftstraat via a pedestrian bridge.

Amsterdam’s city council appreciated neither the form nor the function of the project. Council members referred to it as a ‘piece of Manhattan’, developed to get the most out of the minimum of space, and accused the architect of an infinite lack of imagination. A council majority felt that the central location necessitated a wider discussion about whether Amsterdam needed Bouwes’ luxury mass tourism. The press was equally critical, stating that the city centre’s diversity might be replaced by bland architecture with a similar bland type of atmosphere.

Yet the social-democratic alderman for urban development, Han Lammers, defended the project fiercely. What was good for Bouwes was good for the city: the developer would clear up an assembly of dismal architecture and prevent the Leidseplein from decaying into a desolate, rotting site. The purport of Lammers’ reaction as a politician is something heard repeatedly since: tourism is important to the city’s economy and a shortage of hotel rooms might be deadly for local business. 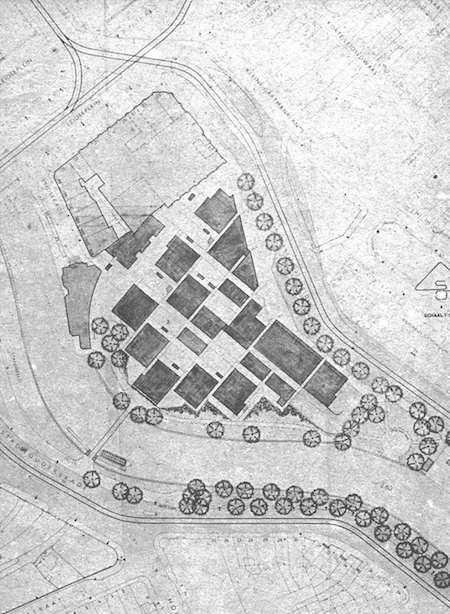 Second version of the Bouwes scheme, which would have replaced both Paradiso and the former prison complex adjacent to the Leidseplein (1974).

A democratic-cultural counterplan
Although Bouwes modified his design and ultimately spared Paradiso, the scale of the complex was the least of his opponents’ objections. It was the undemocratic and elitist nature of his plan that led to opposition from outside the city council. Preservationists, architects and neighbourhood action groups argued that their city should not be sacrificed to the self-aggrandising project of a property developer. In early 1975, the motley crew of opponents united in an action group calling itself BEWA. To come up with an alternative for the Bouwes plan, BEWA envisaged a public participation process that has gone down in history as Amsterdam’s most extensive public participation process ever. Calling upon their fellow citizens to preserve urban diversity, BEWA stated that if the Bouwes plan went ahead the soul of the Leidseplein would be lost forever, or as the action group described the square’s lively nightlife crowd:

‘It’s the artists and their art bums, the voyeurs and their exhibitionists, the rowdies and their sociologists, the freeloaders and their rich patrons, the silent drinkers and the screaming drug users, the beautiful crazies, the silly poofs, the deadly serious gays, the film fans, the night owls and the daydreamers.’

BEWA aimed to capture this diversity in a counterplan that would create social housing for the young and the elderly, small-scale catering and shopping facilities, workplaces and a cultural centre. Buoyed by these alternatives, the Leidseplein could progress as the city’s multifaceted and convivial living room. Unsurprisingly, Bouwes refused to take the alternative seriously. The idea of mixing his intended public and the visitors to Paradiso was unthinkable, leading him to frankly express his feelings about the less well-to-do: ‘Does public housing really need to be provided in this exact part of Amsterdam? I don’t mean this in a derogatory way, you know, but then you’ll see the washing hanging out on Monday.’ 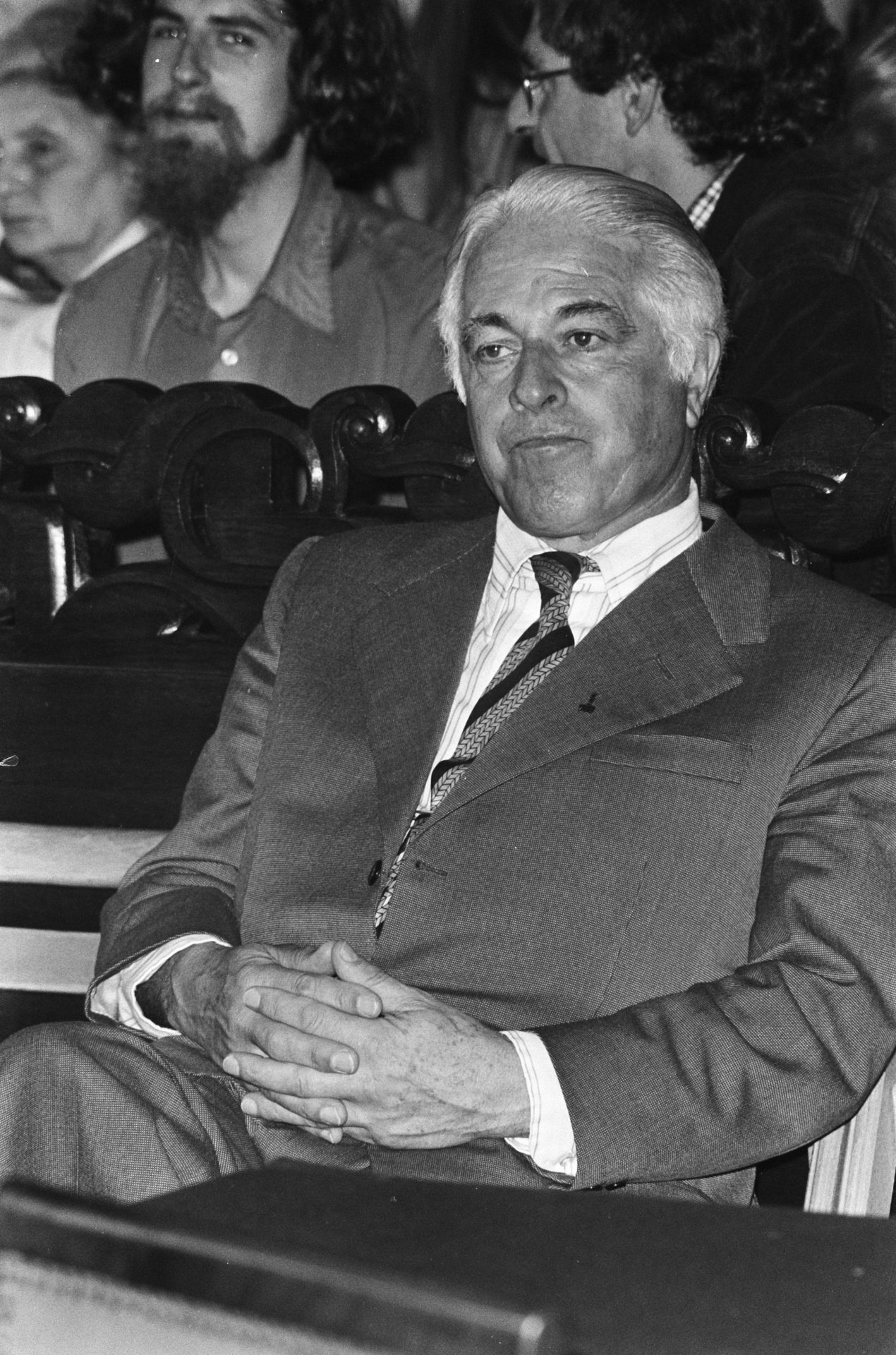 The resignation of Lammers as alderman in the summer 1975 deprived Bouwes of his most important ally. Lammers’ successors ultimately ditched the plan. Rather than private developers, it fell to critical citizens and responsive politicians to determine the future of Amsterdam’s city centre, on the Leidseplein as elsewhere. Ultimately, the city council forced the municipal executive to draw up a new package of wants and needs for the building plot, giving fair attention to public housing and cultural facilities.

A right to the city
In 1993, after a long and tedious planning process, the so-called ‘Max Euweplein’ opened to the public. With its affordable housing sitting next to a state-run casino, its passage adorned by neoclassical ornaments and its mix of souvenir shops and offices, it still is a striking mixture of postmodern architecture, hardcore capitalism and social democracy. Much to the chagrin of BEWA, financial shortcomings and political bargaining had diluted their utopia of inclusivity and diversity, leaving Amsterdam with a semi-public space catering to suburbanites and tourists. Looking at the watered-down version of BEWA’s utopia today, one cannot help but feel sorry for the activists who had spent a lifetime protesting Bouwes. 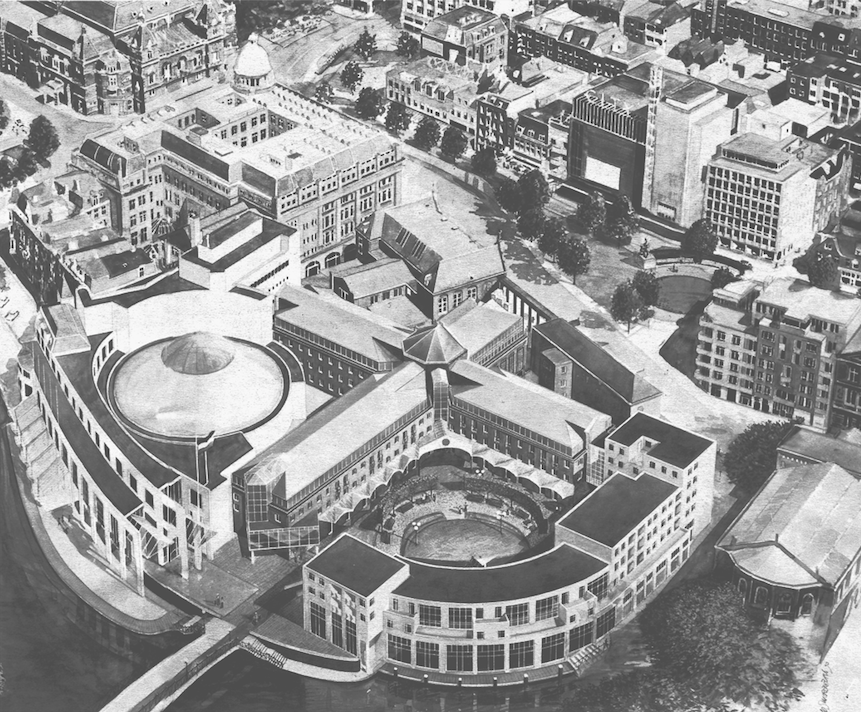 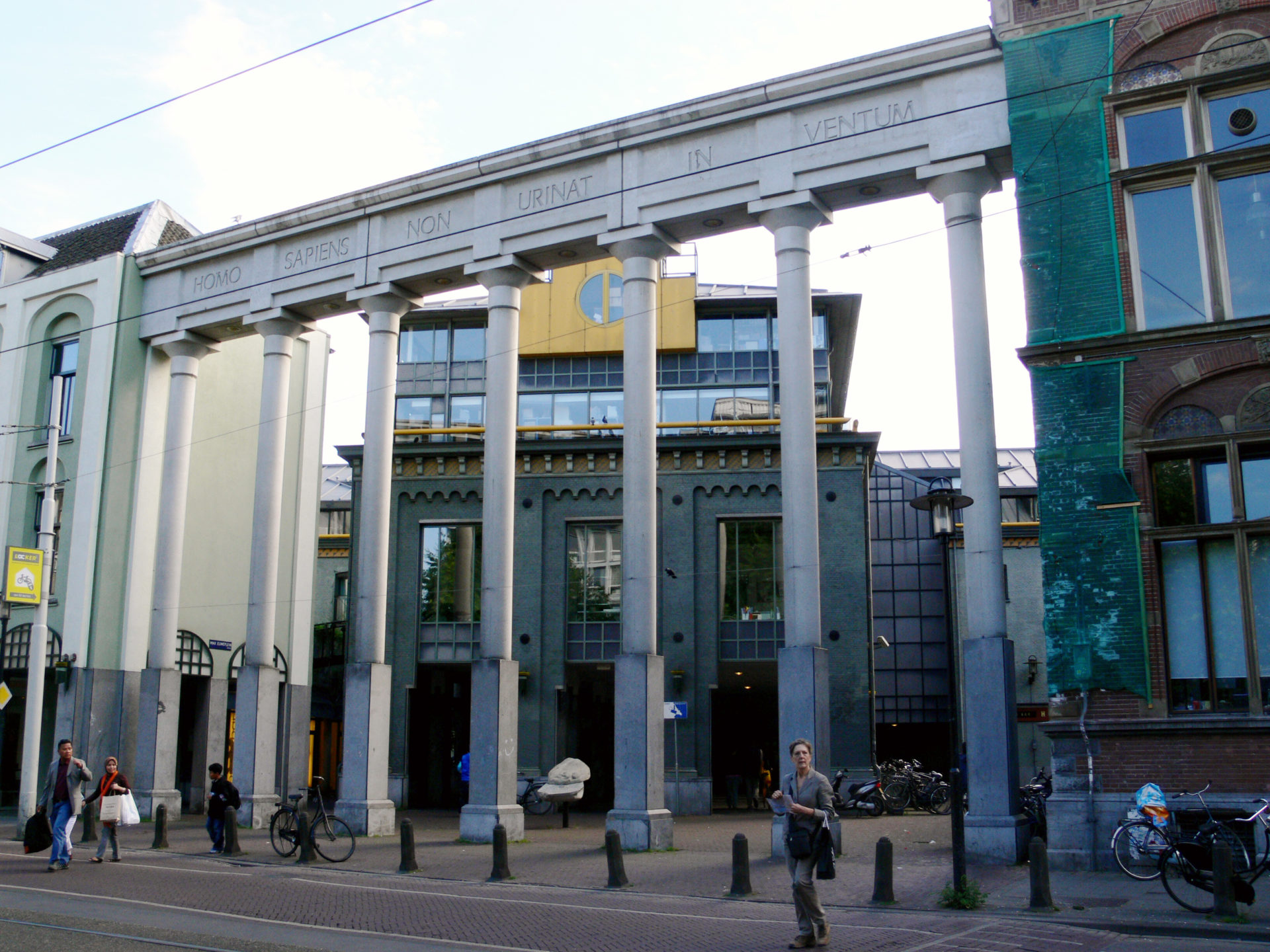 Though the Max Euweplein is questionable in both its aesthetics and functioning, the activities of BEWA demonstrate that market forces in the centre of Amsterdam need not present a fait accompli. The compromise made for the area, with its retention of Paradiso and De Balie, has certainly created a more accessible and pleasant place than the hotel colossus Bouwes had envisioned. Through its actions, BEWA demonstrated that citizens can claim their right to the city by making themselves seen and heard in both political and spatial terms.

There is little use in looking back on such actions with a sense of nostalgia. Veteran activists tend to accuse younger generations of political apathy and laziness, disregarding the fact that carrying out political action has become an unaffordable luxury in Amsterdam, exemplified by current rental prices and increasing tuition fees. Moreover, Amsterdam’s current hotel boom is less visible than the wholesale redevelopment efforts of the 1960s and 1970s. Repurposing historical buildings now involves restoration and refurbishment instead of demolition, meaning Amsterdam residents are less directly conscious of ongoing transformations.

The discussion over the future of Amsterdam’s Leidseplein demonstrates how politicians and architects could be more sensitive to the affective feelings of citizens. Disturbances caused by tourism are not merely a question of perception. In fact, the annoyances caused by mass tourism represent a forceful reality, imposed on a vulnerable social and physical fabric. What is more, other European cities show how things can be done differently. Bruges has been applying a strict hotel moratorium for years now, while Berlin recently announced a rental cap – partially in response to the city’s growing number of tourists. In Barcelona, a city struggling with increasing visitor numbers as well, the tourist limit introduced by the new mayor proves that political engagement is still key to the right to the city.

Only if citizens organise themselves and force their officials to protect them from the volatile dictates of the market can the socially diverse character of Amsterdam’s city centre be retained. In fact, its citizens owe it to BEWA and the countless other action groups to make a stand now.

add comment
Jere
It may not perhaps put on the surface and even be apparent to everybody, nonetheless it is unquestionably there.
Effie
Good read! I just wonder if the word P.C. Hooftstraat is spelled correctly? Shouldn't it be Hoofdstraat with a "d"? Thanks!
Related