Urban designers were so preoccupied with whether they could make anti-terror infrastructure more beautiful, they didn’t stop to think if they should.

Urban designers are increasingly being tasked with an emergent ‘design challenge’ for public spaces: how best to deliver anti-terror infrastructure while generating a pleasant urban environment. By allowing themselves to be drawn into this challenge, and by dutifully working to respond with creative and constructive solutions, they are inadvertently helping to normalize a creeping ‘fortification’ of our cities that in turn contributes to a wider process of ‘bordering’ across the world.

The trend comes in the wake of a succession of fatal and horrific vehicle-based terror attacks over the past few years in several cities across the Global North, most notably London, Nice, Strasbourg, and New York. Following such attacks, knee-jerk urban design interventions have often involved the haphazard insertion of protective infrastructure into public spaces in the form of reinforced steel fences, cement blockades, and guarded entryways to pedestrian walkways and bike lanes. For example, following the vehicle attack that killed eight people in lower Manhattan on Halloween of 2017, New York’s Mayor, Bill de Blasio, reserved $103 million in the infrastructure budget “to install permanent barriers, bollards, granite blocks, [and] concrete blocks at well-trafficked central areas.” 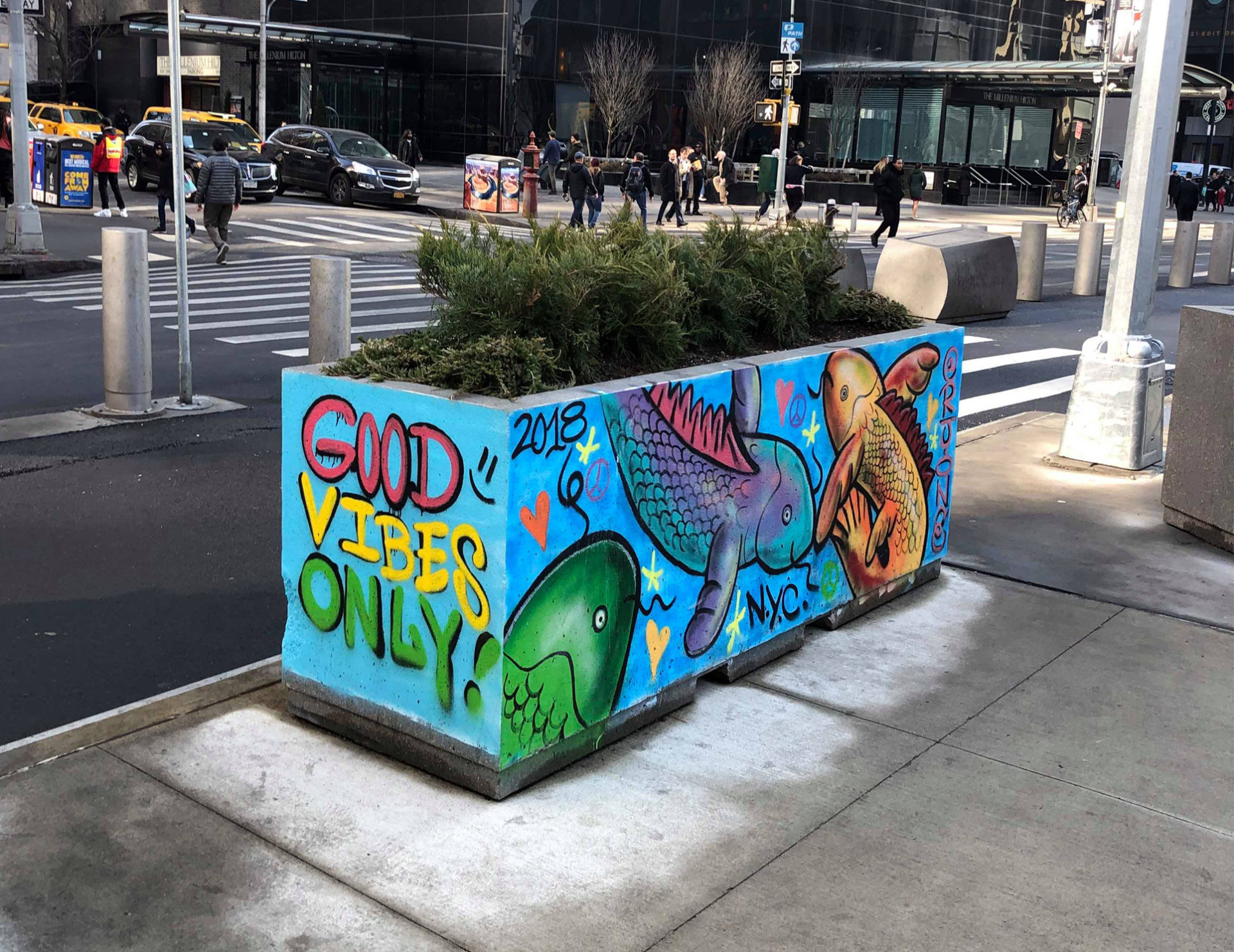 In light of this rapid transformation of public spaces, it’s no surprise that we see increasing calls for urban designers to imagine new solutions for their protection. Take for instance statements made recently by David Scharia, Director of Counter Terrorism for the United Nations Security Council: “One of the biggest problems is that everyone is fighting the last war, in terms of urban design. Urban design is thinking retroactively. Police departments and counter-terrorism experts could be asking urban designers to act proactively.” 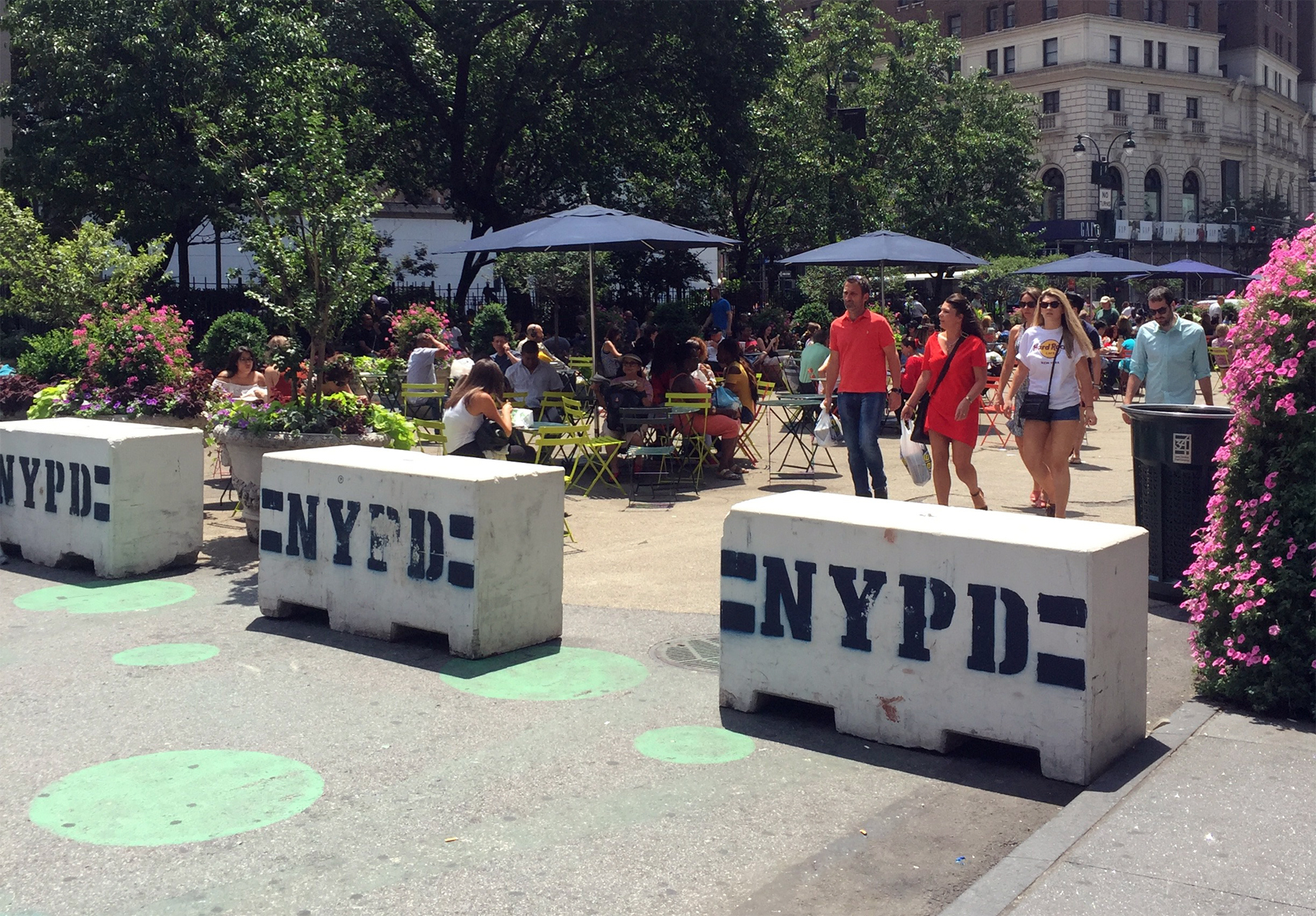 Scharia is essentially demanding that urban designers make these fortifications part of the scenery and ideally invisible, so that they may be more palatable to the regular users of public space. This comes in the context of the now ubiquitous trend for “human scale” urban design, which advocates for the insertion of sidewalks, benches, and greenery in order to have the public linger and commune in these same public spaces, as well as spend money (indeed, these interventions are widely sold to developers as a means of promoting economic growth in given areas by increasing foot traffic and shopping hours). Taken together, the result is a peculiar marriage of hard and nice design which has become ubiquitous in many major cities.

Take New York City as an example. Here, designers have attempted different scales of intervention in order to mask and/or integrate anti-terrorist bollards into the urban fabric. Starting at the most basic, superficial level, bollards have been painted with decorations or fitted with replaceable plastic coverings to make them easier on the eye. 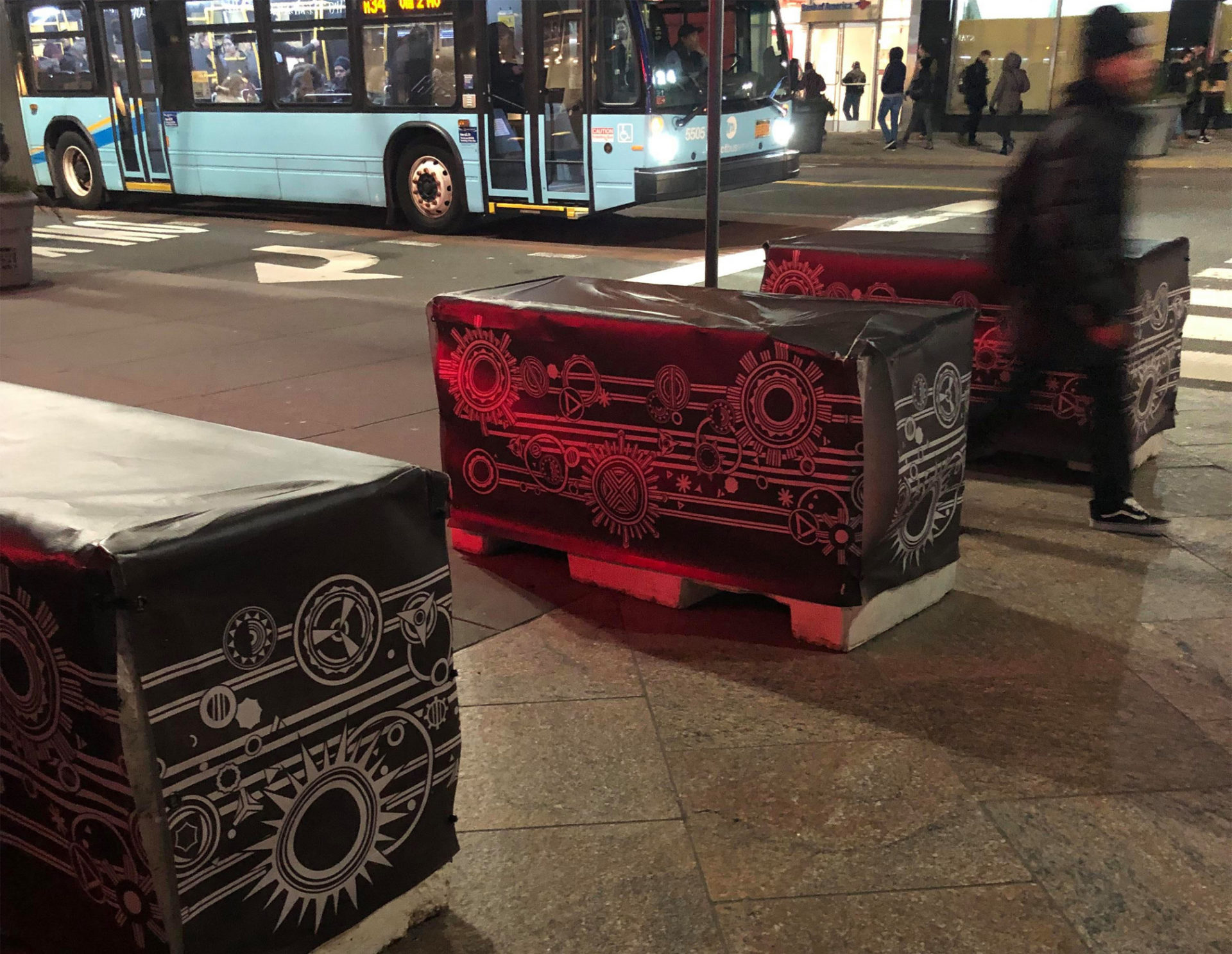 Further on up the place-making ladder, we see bollards that can be fitted to serve dual-purposes, including planters for trees and pretty flowers, or doubling as benches for pedestrians seeking respite. At the most “advanced” level, thoughtful, proactive urban regeneration efforts strive to integrate protection and pleasantries under a combined ‘quality of life’ banner that are indistinguishable from the perspective of regular urban pedestrians.

As Diane Sullivan, director of urban design at the National Capital Planning Commission said in an interview with the Washington Post: “This is a really important discussion about our public space… These are spaces that you should feel welcome in. The more you try to secure them with rocks and bollards and other things, the less they’re seen as welcoming.” 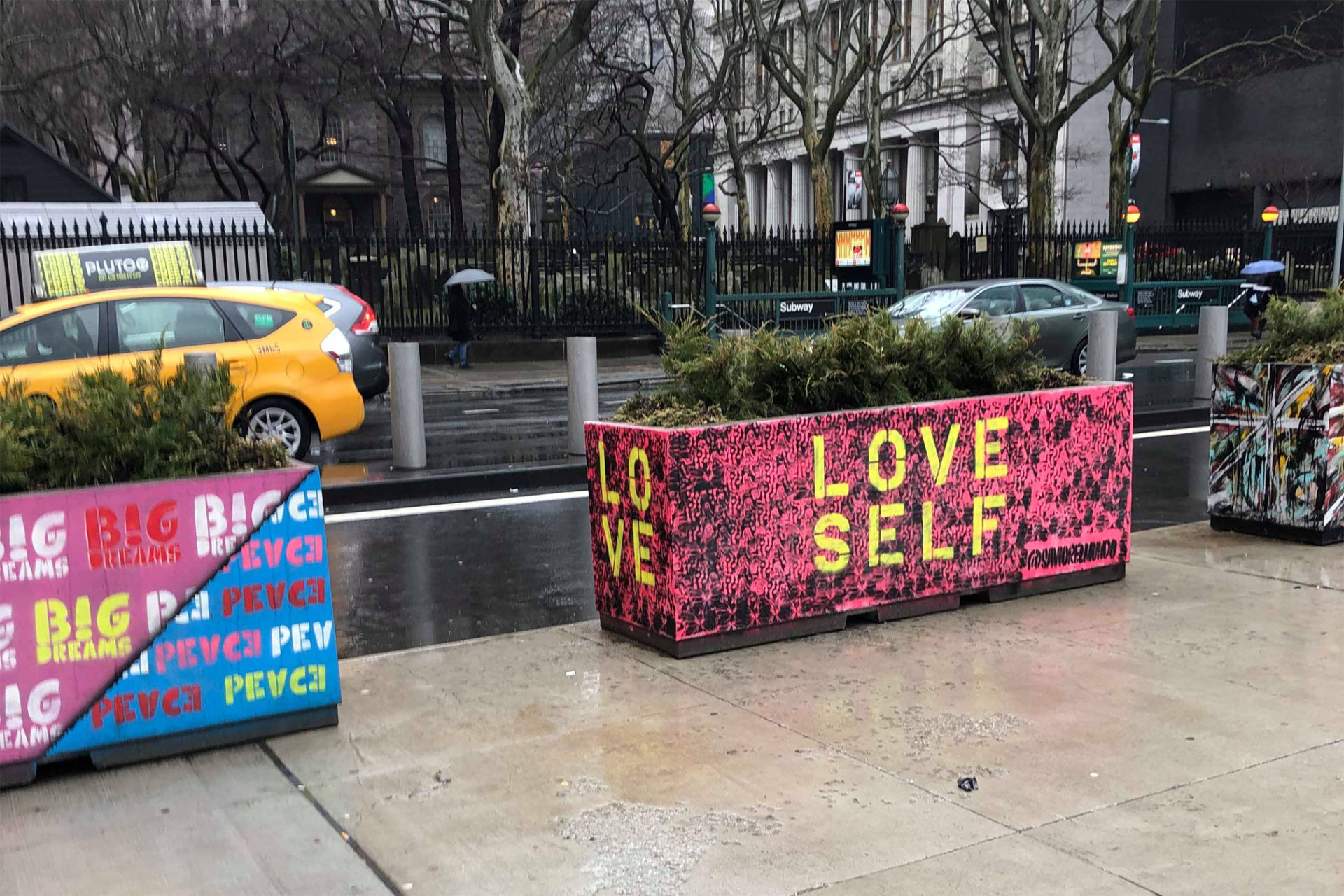 Planter bollards outside the WTC

Her endorsed plans for Washington DC’s H-Street corridor include concrete benches (which prevent vehicle access to sidewalks) situated amid large beds of flowers and shade-providing trees, ultimately (and undoubtedly) creating a lovely urban environment. Deployed in this way, it is far from obvious that the role of these plants and benches are chiefly to protect citizens from vehicle attacks.

In a similar vein, Stefano Boeri, the architect famous for his vertical tree buildings, claimed in an interview with Dezeen that: “We cannot afford to see the thousands of squares and public spaces present in the hundreds of [Western] cities transformed into war checkpoints, knowing that only one derisory percentage of these thousands of squares will be really hit from terrorist attacks…”  Instead, he posits using trees and giant planters to enhance the urban experience while protecting our cities.

Being able to create spaces that are both community-enhancing and community-protecting is seen here solely as a solution, with little concern for the problem it is attempting to solve. To be clear, this problem is the presumed increase in terror attacks on urban public spaces. Yet even a cursory look at the historical data illustrates that the terrorist threat has fluctuated for decades, with countries like the US and UK experiencing their most significant flashpoints of terrorist activity in the 1970s and France in the 1990s.

While terrorism may be no more of a serious threat now than in previous decades, what is more serious is the anxiety surrounding the protectionist reaction to the threat. Indeed, for our increasingly unequal economic system to reproduce itself, it needs media and political elites to ramp up a climate of anxiety, which can in turn provide a pretext for borderization.

In “Down to Earth,” Bruno Latour describes this phenomenon as a way for elites in the Global North to continue to secure wealth and privilege (including climate resources and institutional efficiencies), to the detriment of the Global South.  Latour outlines a myriad of overlapping factors occurring on a global scale that have promoted and reinforced this process (both ‘legitimate’ and perceived): including climate instability, resource scarcity, political insurgency, economic insecurity, and escalating refugee crises. 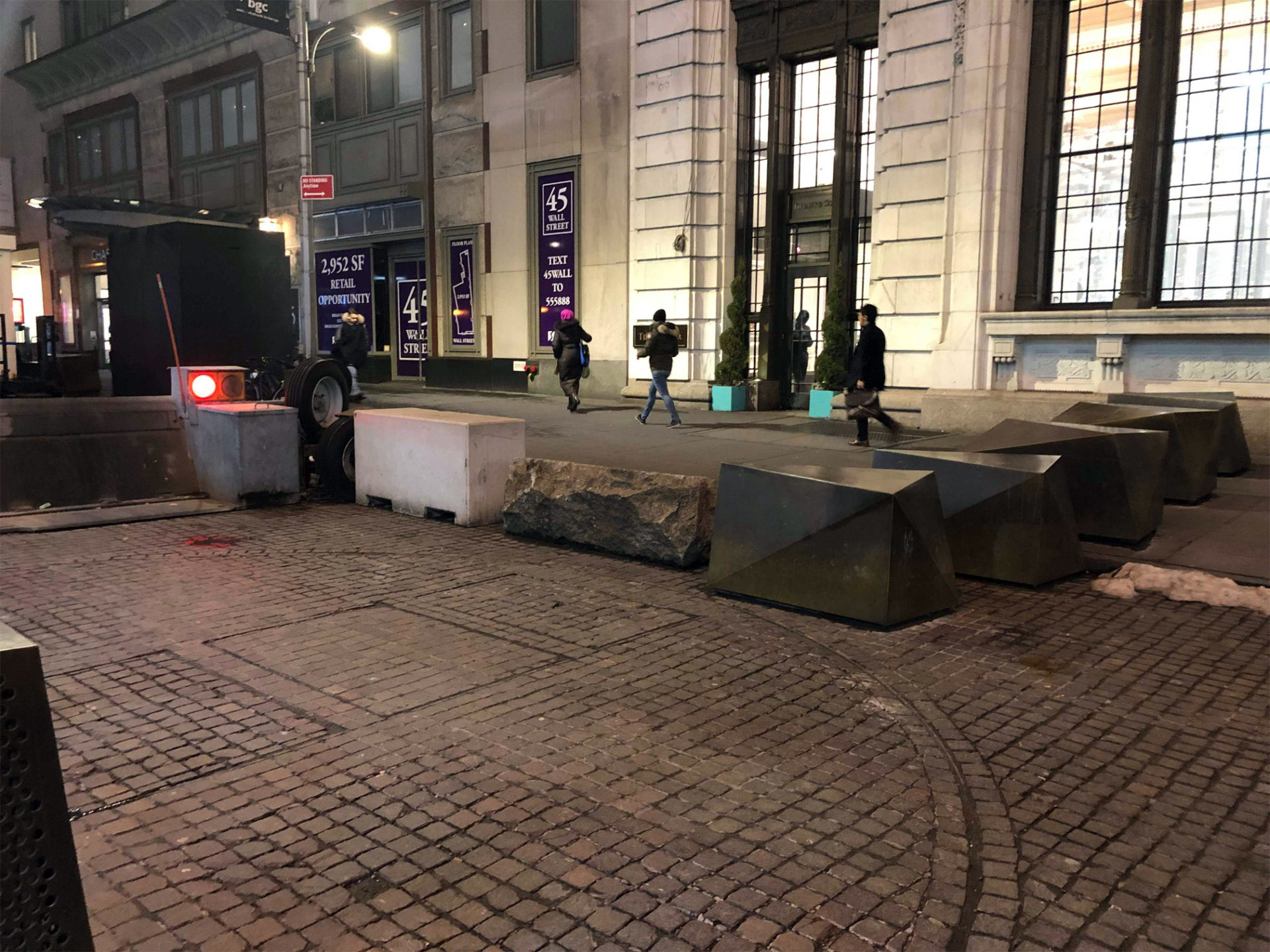 This can perhaps be seen most vividly in the United States, especially in the aftermath of 9/11: whether through securitized borders (tightening restrictions for cross-border migration in airports, the US Border Wall), economic protectionism (carbon offset pricing, competitive tariffs against China), or geo-political exceptionalism (the US Withdrawal from Climate Accords), the xenophobic “America First” banner is simultaneously insulating and antagonistic. Importantly, this process of increased borderization of both public spaces and national economies reinforces the perceived notion that these borders are needed in the first place by creating a heightened sense of threat from an encroaching Other.

In addition to the design of public spaces, this borderizing tendency is also present in the architectural sphere, with architects gladly facilitating a process of hardening the boundaries between the public and private sections of large buildings. This includes the increasing tendency to have lobbies that are outfitted with security checkpoints and metal detectors and, in extreme cases, serviced with armed guards and police dogs.

Furthermore, with the rising incidence of mass-shootings, particularly in the United States, important public spaces such as schools and churches are being outfitted in the same way. Architects, much like urban designers, are being tasked with making these spaces safer, but without making them feel hard, confined, and brutish (i.e. fortress-like). This includes re-designing school campuses to have single entrance points, and making floor plans restrictive for potential shooters, while still remaining open for flow and easy navigation. Strikingly, the aforementioned protectionist measures in American public spaces come at a time of parallel expansion of open-carry gun law rights across much of the United States.

Here we have a very clear case of what’s really at play in the wider borderizing dynamic which Latour describes: as spaces become more fortified, the threat they face is allowed to increase. In light of this, it seems futile for designers to engage with the legislative authorities tasked with protecting citizens in good faith. 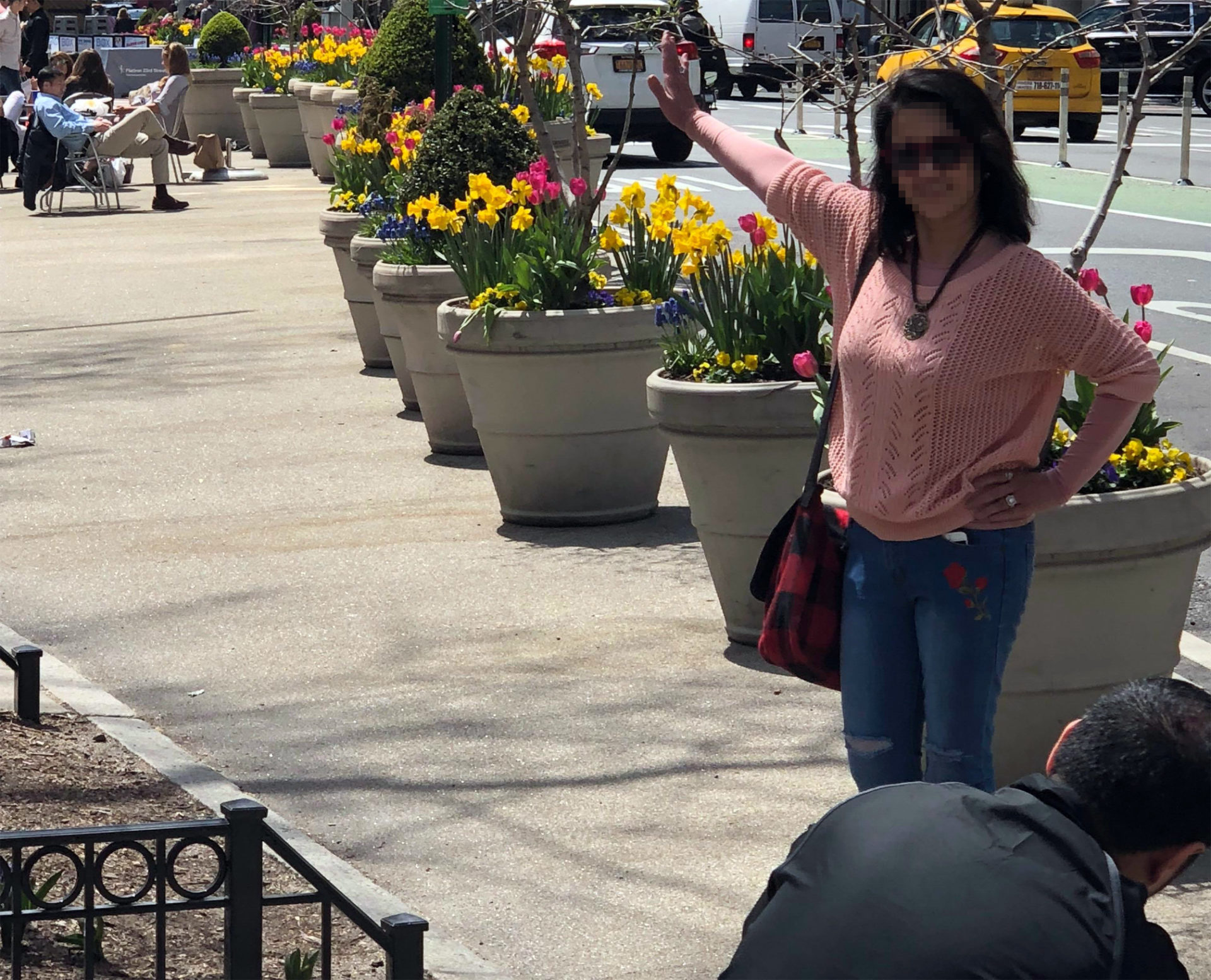 To realize this is to accept that critical citizens shouldn’t necessarily be focusing on the borders and micro-fortresses themselves, but should rather pay attention to the conditions that enable their production. As Keefer Dunn argues in his article “Radical Praxis: Activism within and Beyond Architecture”,  architects, urban designers, and planners “should focus less on the limited agency of buildings to make change and more on the agency [they] have as people”.

From here, Dunn imagines a scenario in which interns withhold their labour if the practice they’re working for starts designing prisons, and another where production staff refuse to work for the GSA under a Trump administration. Granted, Dunn’s shift in focus from “activist architecture” to “architects as activists” may be hard to swallow for a profession that has traditionally seen itself as a vital agent of social and urban change. But this is surely better than the current role they’ve found themselves in: making an increasingly aggressive urban situation more palatable to an ever more anxious citizenry.

Alice Sweitzer
Alice Sweitzer is a consultant and urbanist currently based in New York City.
Charlie Clemoes
Charlie Clemoes is a writer, editor and podcaster from the South West of England, currently living in Amsterdam. He is an editor at Failed Architecture, with whom he is currently producing the Failed Architecture podcast. He is also part of the Amsterdam-based design platform fanfare, principally as co-host of fanfare tetatet.

add comment
Shon
This is v chilling. I wonder what other things we’re doing where we’re normalizing reactionary protection in a way that lets the thing we’re protecting against just be an assumed reality that can get bigger and bigger? I think something kind of analogous is going on with online privacy/security: 1) Websites acting more transparent about tracking your cookies and giving you the option to “opt out” of collecting various data. I suspect these minor “freedoms” are part of a slight of hand that makes us accept data tracking as a part of life, and distracts us from the commodification of personal data. 2) The cutesy friendly design that’s become the norm for many online services. More brands acting like our peers in the name of humanized interactions, but really in the service of making us comfortable submitting our lives to them.
James
Great post. Made me think about how European cities have this interesting dichotomy between old buildings that were built fortified in the first place and newer, typically government buildings, that weren't in order to deliberately appear democratic and open. We came to love the architecture of the old fortifications but it's the cheap concrete crappiness of the new ones that's jarring. Replace them with sculpture!
Related