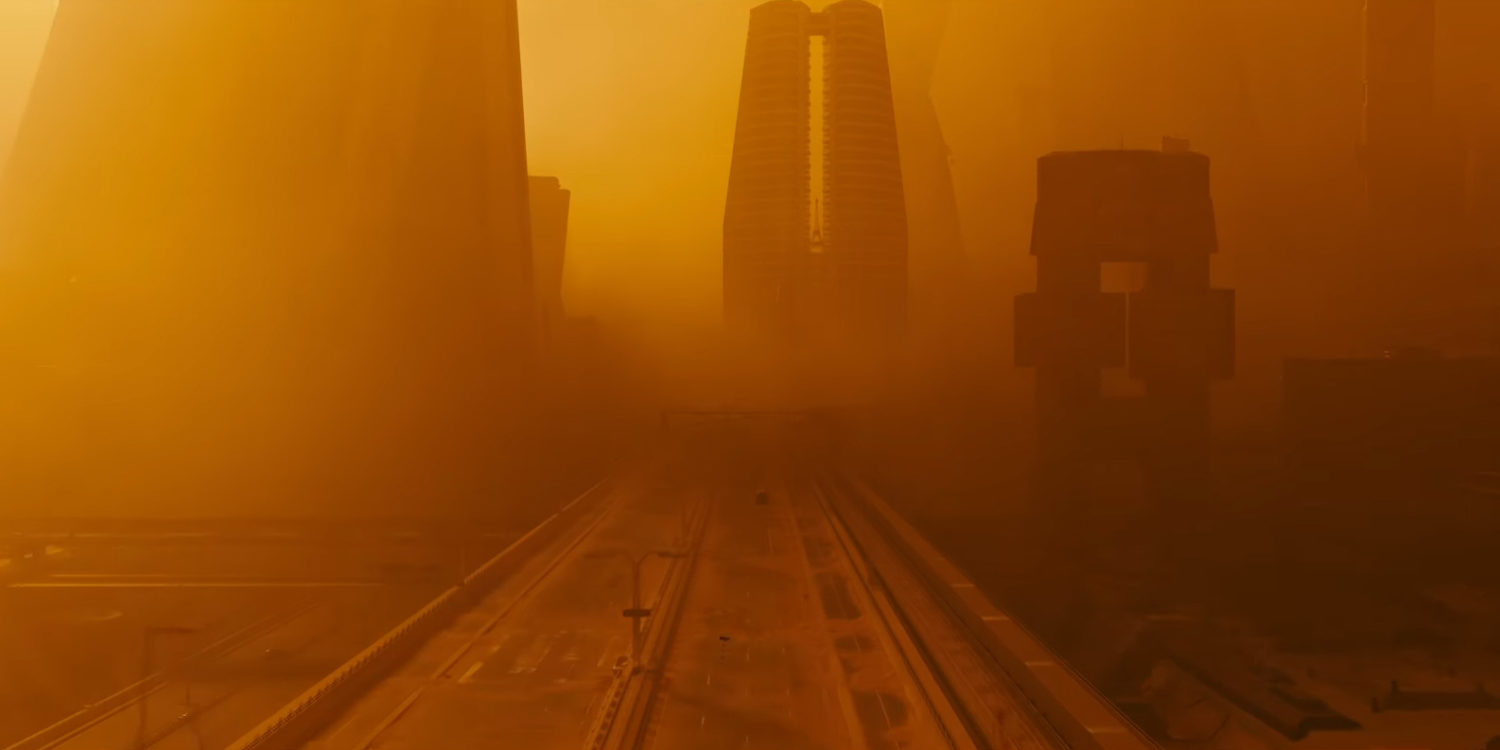 Blade Runner 2049's cityscape has been heavily influenced by brutalist forms. But the hyper-capitalist society in which the film takes place is completely at odds with the style's underlying philosophy.

There’s been a fair few takes on this film, either seeking to decipher the film’s numerous visual motifs or commenting on its underlying moral message. Meanwhile, it’s also had its fair share of criticisms, largely centering on the objectification of women and the lack of racial diversity.From an architectural perspective, there’s a lot to get your teeth into, especially if you’re one of the many recent converts to the once derided brutalist architectural style.

One of the many, vast brutalist cityscapes present in the film.

This brutalist association is wholly intentional. In an interview for Variety, Blade Runner 2049’s cinematographer Roger Deakins explained that “A lot of the Brutalist architecture in London became the key, really”. According to Deakins, what informed set designer Dennis Gassner’s vision most “was when [director Denis Villeneuve] said he wanted it to feel brutalist, that severe concrete architecture that started in the 1950s”.

Watching the film, though, a problem emerges in the application of this particular style: its central philosophy, rooted in socialism, is entirely out of step with the future society which the film depicts.

The Brutal World of 2049
The future cityscape in which 2049 takes place is one that appears to have absorbed, and accelerated the worst effects of our contemporary late capitalist economic model.

This is most obviously apparent in scenes where the main character K flies through Los Angeles in his hover car. His periphery is filled with ambient, neon advertising. Slogans and icons fade into a white noise, fighting for this decidedly glum character’s limited attention. He is the perfect, lonely, individual consumer.

Some of the seductive advertising K is treated to.

But it is also implied in the economic model which produces this cityscape, which is seemingly dominated by a single corporation, Wallace Corp. Led by shadowy industrialist Niander Wallace, the corporation appears to have established a monopoly over synthetic farming, and due to the collapse of the world’s ecosystems, also over humanity’s food supply. As the plot progresses, it’s clear to see that this power has afforded Wallace the opportunity to act as if completely unencumbered by the rule of law.

On this note, another definitively capitalist element of this cityscape is the abject lack of governance. Stripped of all benevolence, government only appears as an instrument of control, in the form of the LAPD, while the lack of social provision is underlined by the almost complete absence of families, and more importantly, children. Indeed, the only children we see in the film are outcasts, condemned to work in a child labor sweatshop outside the city limits.

LAPD Headquarters, the only government in sight.

This is all quite in keeping with the way things are going in our most nakedly capitalist urban territories. In a 2015 blog post, the editor of New Socialist Tom Gann envisaged a London in the very near future, “a city largely without the presence of children as an ever decreasing supply of council houses leaves families with children to leave [the city].” Gann compares this masculine world to a “gnostic fantasy… without touch, labour, chance or intersubjectivity”.

The Brutalists’ Future
So far, you might think that such a society, characterised by rabid consumption, lonely men, and a lack of any kind of mutual care, would be very well captured by an architectural style whose very name suggests brutality. But this would be to drastically misunderstand the intentions of the original brutalist architects.

Much of the misconception about brutalism resides in the word itself. The word “brutal” exists in numerous European languages. But the original architects who used the term sought to employ the specific subtlety it has when spoken in French, where concrete translates as “beton brut”.

Moreover, “brut” specifically suggests rawness. This was meant to be a style that really stripped back the smooth, soft forms of early modernist design. According to geographer Oli Mould in his article “Brutalism Redux”, from the 1950s onwards, an increasingly radical architectural avant garde were beginning to see such soft forms as “frivolous, whimsical and not progressive enough for the welfare needs of the post-war era”.

The key intentions of the style were outlined in a manifesto written by Reyner Banham and published in the Architectural Review in 1955. According to the manifesto, brutalism intends to emphasise memorability, material rawness and an honesty of structure. But, as Mould emphasises, brutalism in practice went much further than this material definition.

This is put most eloquently by the couple who did perhaps the most to fashion brutalism as a radical, socialist form of architecture, Alison and Peter Smithson: “The bare structure was ready for dressing by the art of inhabitation”. The idea was to fashion memorable forms out of decidedly raw materials, in order to capture the spirit of the inhabitants, and to really provide a place which would harmonise with their complex experiences over a long period of time.

This is why director Denis Villeneuve’s aim to make the world of 2049 “feel brutalist” falls flat. To concentrate merely on the look is to eschew the principal aim of the brutalist architects. Indeed, while the architecture in Blade Runner may resemble those buildings built in the postwar period, it is a brutalism stripped of all sociality, and stripped of its most important element: people. In that sense, it’s not really brutalism at all.

Capitalist Realism and Futurist Set Design
But we shouldn’t be too harsh on the film’s producers. It’s not their fault that the society we now live in has almost completely given up any attempts to fashion a future (and by extension a future urban architecture) which operates to the benefit of the general citizen.

Yet this brings to mind another serious problem with the use of brutalist architecture: its flagship projects were mostly completed half a century ago. This architecture was indeed futuristic around the time Philip K. Dick was writing Do Androids Dream of Electric Sheep? (1961), the novel on which the film is based. But now, in 2017, it is anything but futuristic. Again, this suggests we are stuck in a present which is incapable of imagining a bold future of its own.

Brutalism without people isn’t really brutalism at all.

More specifically, capitalist realism is an ideology which took particular root after the fall of communism, when capitalism’s proponents were able to present their cherished economic model as the only realistic political-economic system. Capitalist realism colours all areas of contemporary experience, it is, as Fisher states “…a post-ideological malaise which suggests that the economics and politics of free market neo-liberalism are givens rather than constructions.”

In this context, contemporary films set in the future are encumbered by a present which is incapable of imagining a more enlightened future. After all, amid the pervasive capitalist realist ideology, there is no future after capitalism. To paraphrase Fisher, it is nowhere and it’s forever. These films are caught in an ideological framework which is more comfortable depicting the end of humanity than the end of capitalism. As such, the urban environments we see in these films can only reinforce an unbearably bleak vision of the future, think Children of Men (2007), or one that is almost identical to our present, think Her (2013).

“To Dwell is to Leave Traces”
In an article for The Baffler, David Graeber talks specifically about the new Star Wars films. He initially speculates that people of previous eras would have been dazzled by how realistic the film’s specialist effects were, especially when compared to the clumsy special effects of yesteryear. But he catches himself: “Actually, no. They wouldn’t be impressed at all, would they? They thought we’d be doing this kind of thing by now. Not just figuring out more sophisticated ways to simulate it.”

The problem with simulation is that it can be wiped clean. So too, can much of the architecture which we are now surrounded by. It may look fresh right now, in the moment, but it contains none of the promise of a future which people have made themselves. And soon it will be knocked down and immediately forgotten about.

Returning to Blade Runner 2049’s use of brutalist forms, while they may look monumental, at Wallace’s whim, they too can easily be destroyed, and will immediately be forgotten about, especially since many of its most spectacular brutalist-style backdrops are also largely devoid of people. It is people that give this form of architecture its significance (all architecture for that matter).

This brings to mind the cultural theorist Walter Benjamin, who famously said that “to dwell is to leave traces”. While brutalism is precisely geared towards realising this ideal form of dwelling, nothing about the Blade Runner universe suggests even the slightest concern for such an ideal.

Charlie Clemoes
Charlie Clemoes is a writer, editor and podcaster from the South West of England, currently living in Amsterdam. He is an editor at Failed Architecture, with whom he is currently producing the Failed Architecture podcast. He is also part of the Amsterdam-based design platform fanfare, principally as co-host of fanfare tetatet.
Alice Sweitzer
Alice Sweitzer is a consultant and urbanist currently based in New York City.

add comment
Lawrence
Check out the architecture and society in the film Dredd (2012). It takes its que from 2000AD comic created in the late 70's and early 80's UK. It depicts its world as an absurd extension of Thatcherite/Reganite society and cold war paranoia. It is not a depiction of a more enlightened future for sure, but it is an unusual one, with the roots of its world building not in our present time, but in a world of 40 years ago. And for reasons of continuity and fan service the writers of 2000AD have kept their stories there.
Related