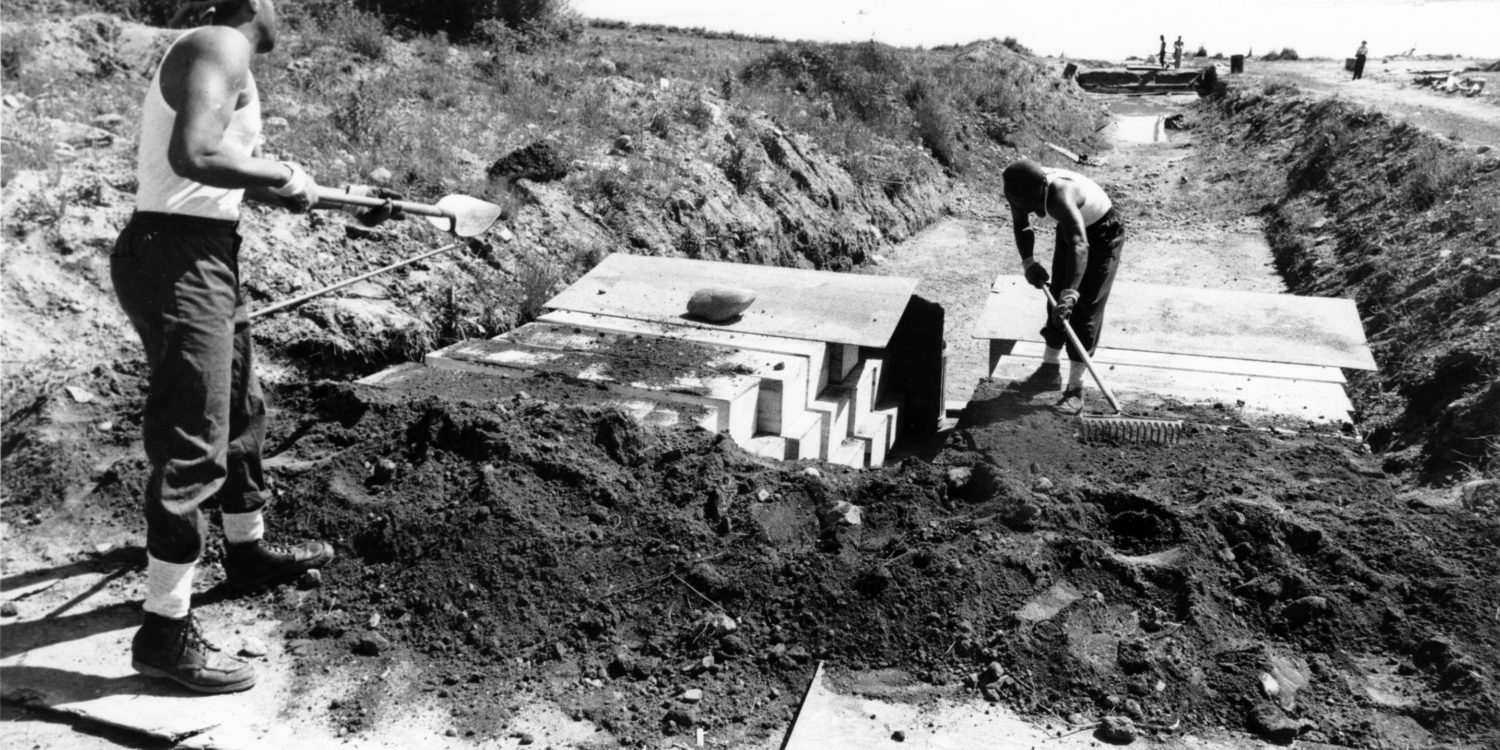 Hart Island, the city’s graveyard for unclaimed bodies, holds many stories, myths, and visions. Can the most recent plan, of turning it into a public park, become reality?

The Island of Bones and Ghosts
An obscure island, just past the Bronx, is a place of ghosts and myths. Access is extremely limited. Exclusively by approved prior arrangement, only to certain portions, never unescorted. Photography usually not permitted. This is Hart Island, the keeper of an untold history of New York City. 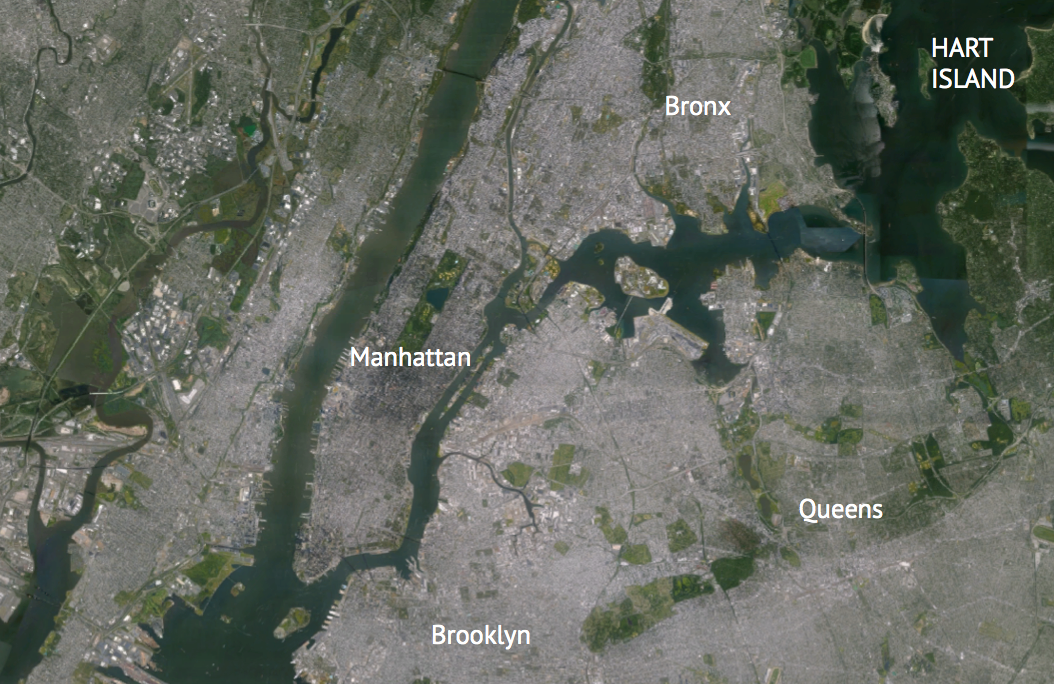 Hart Island on the map.

The intended secrecy is due to the island’s status as the greater metropolitan “potter’s field” (or civic graveyard) for unclaimed bodies. Since 1980 at least 62,370 people have been buried there, but as it has been used for interments since 1869, presumably the number is much, much higher. Some estimates total around 850,000 making it, if nothing else, an incredible space-planning operation for approximately a 131 acre area. Due to cost requirements most of the physical digging is done by the prisoners of Rikers Island Correctional Facility for about 50 cents an hour. A practical arrangement as Hart Island is operated by the Department of Corrections itself. According to rumor, grave-digging is considered a pretty good work detail: it’s outside exercise and involves a boat ride. Yet even though the island has been fixed as a burial place for over a century, that is not the only purpose it ever held. In many ways Hart Island is a reflection of the changes and ambitions of the city in reverse. Arranging a place for the dejected, including in death. 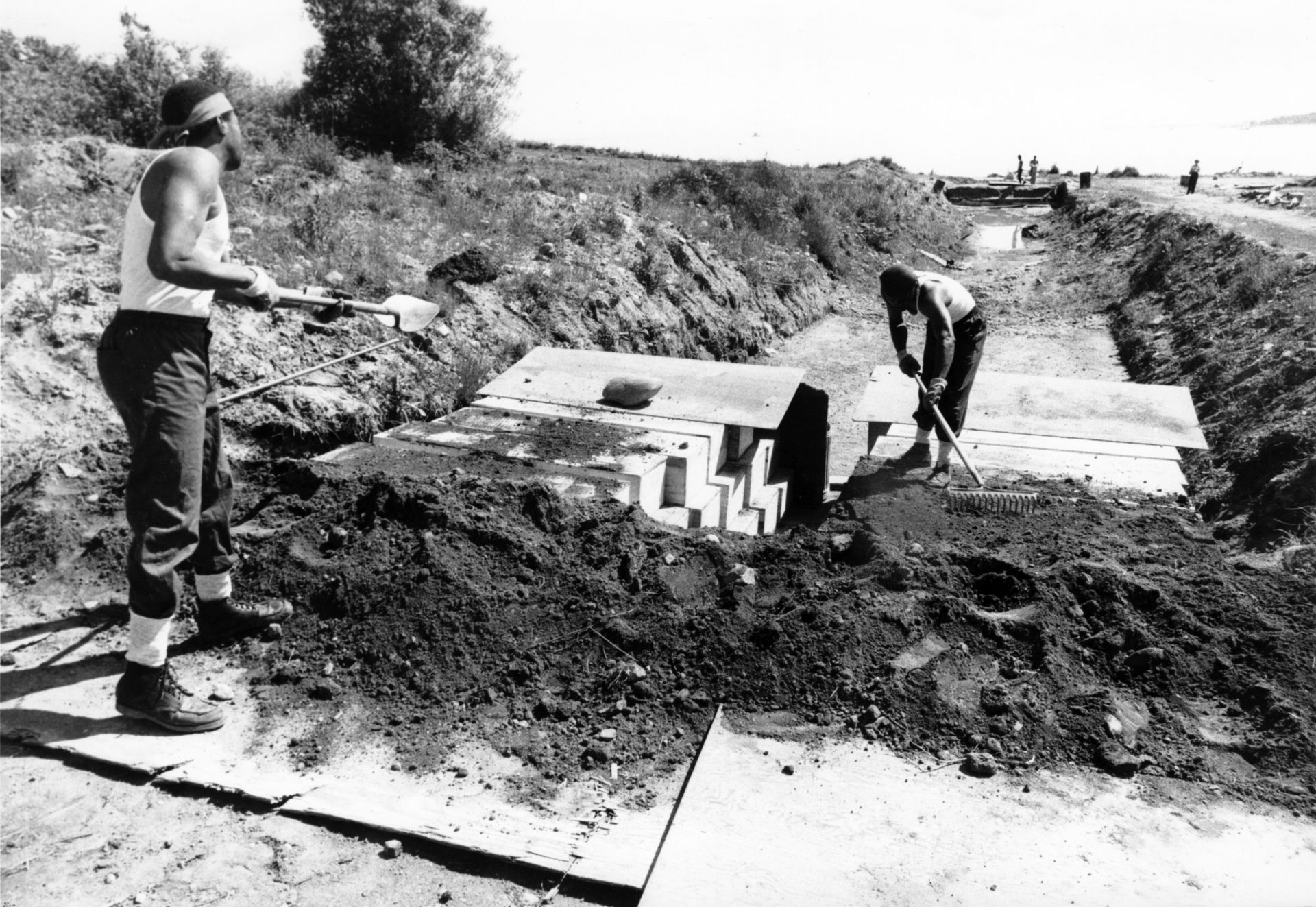 Yet now there are murmurs of turning the island into a public park, an action raising up delicate questions about the functionality of grief space in the digital age.

Ultimately the future of Hart Island asks: Is unwanted space the mirror of a city’s past, or what pushes it further?

Where The End Began
In 1869 a woman named Louisa Van Slyke died in a charity hospital. With no one to claim her or pay for a burial, she was the first to be officially interred at Hart. Five years earlier, the island had been a Prisoners of War camp for Confederate Soldiers. (It had included burials then however the soldiers were later moved to the Cypress Hill National Cemetery in Brooklyn.)

Not much is known about Louisa. Some sources claim she was born at sea 24 years earlier, presumably an immigrant from an impoverished or working class background, eventually orphaned and was, to use the wording of the time, “unbefriended”. Though most of this is speculation, it certainly would not be out of the common place based off of the vast number of Northern European immigrants arriving in New York on a daily basis in the mid 1800’s. Many without families in tow, looking to make their fortune under often dangerous circumstances. Mass graves of unclaimed persons became a common practice at Hart Island by 1875.

As time went on, the island also held a prison, a juvenile correctional hall for boys and a women’s mental institution connected to the infamous “Lunatic Asylum” on what is now Roosevelt Island. Just close enough to the city, but just far enough away to be out of mind, the island was only periodically mentioned in legal documents in the nineteenth and early twentieth centuries. Sometimes called “Hart’s Island” other times simply “Hart Island”. That is until one man called city-wide attention to it almost overnight.

The Man With A Plan
His name was Solomon Riley, though sometimes he was referred to as “Millionaire Riley” (a name his bank account had earned for him). He was a wealthy African American man originally from the Caribbean, who had married a white woman. Aided by his spouses’ race, he amassed a vast amount of property in the then predominantly white areas of Harlem. Almost immediately upon purchase he began renting to other African Americans, something few other building owners would do. It’s perhaps due to his influence the cultural movement that followed is now known as “The Harlem Renaissance”. If the original property owners had known he was of African descent from the get-go, they would never have sold to him. The year was 1925, segregation was sewn into the fabric of the age. But unfortunately for blatant racists, Riley was all out of cares to give about societal rules.

Having conquered Harlem, he set his sights just a little bit east. His aim was to build an amusement park specifically for African Americans, as they were often denied entrance to the “Whites Only” attractions of New York. He purchased a section of Hart Island for his endeavor and the project was frequently referred to as “Negro Coney Island”, gaining attention almost immediately. Riley got as far as building a dance hall, a 200 foot boardwalk and a few other structures before the city condemned the property. They reasoned that such public access adjacent to a still operational prison would allow for escapes. Though slightly demoralized, Riley was no fool, he sold the measly four acres of land to the city for a cool $144,000 (which in today’s market is just under $2 million). Sadly he lost most of this money a few years later when the market crashed. He would be dead by 1935. 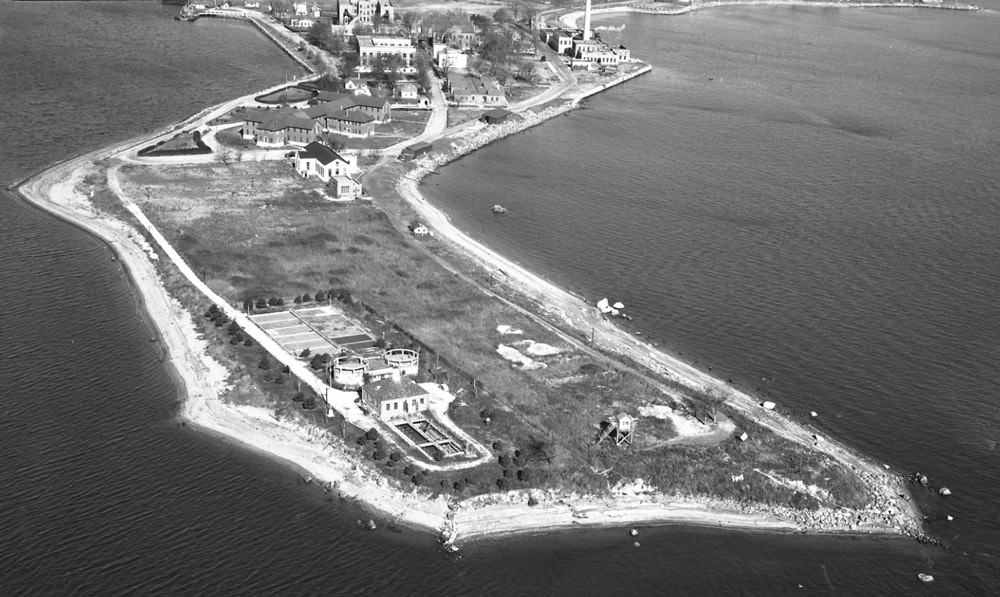 An inmate making children’s toys at the Hart Island House and the Hart Toy Shop, ‘a substation of Santa Clause.’

Dirt and Mirrors
Riley’s tragedy was made even more so because, for a moment, it seemed like he had won. This would be true again and again for the people associated with Hart Island. Figures like Bobby Driscoll, the voice of Disney’s Peter Pan and Oscar-winning actor who was buried there after his anonymous death just a few weeks past his 31st birthday. Or Novelist Dawn Powell who provided such insights as:

“The human comedy is always tragic, but since its ingredients are always the same—dupe, fox, straight, like burlesque skits—the repetition through the ages is comedy.”

However, these stories of notoriety are set against a vast number of those in anonymity. Those who died of alcoholism or train accidents, homelessness or simply not being able to find relatives. The anonymity even extends to notable circumstances such as “Special Child Baby 1 1985” who was the first child to die of AIDS in New York. According to the Smithsonian, it’s estimated that at least a third of the graves on Hart Island are for children. 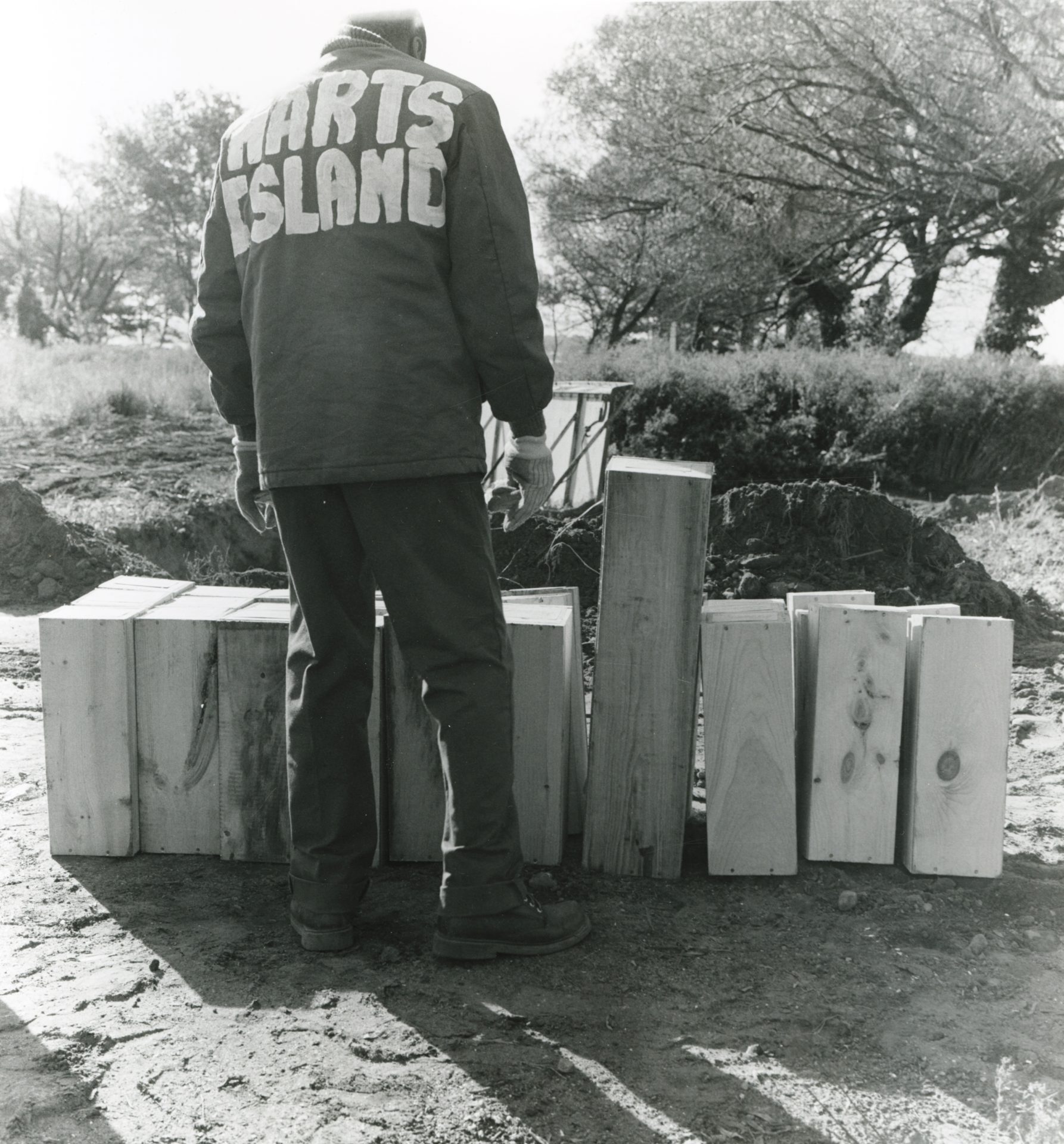 Like all cemeteries, there’s a dark fascination with Hart Island, one that the secretive nature of its access reinforces. The potential future plans of ceding the island from the Department of Corrections to the Parks Department, has in some ways raised a very uncomfortable questions about what purpose a cemetery like Hart Island has in a digital-age city. Particularly as other cities rely solely on cremation for unclaimed bodies, rather than burial.

One of the people addressing this relationship is Melinda Hunt, an artist who became fascinated with the island and the stories of the people buried there. She runs a Cloud Museum called The Hart Island Project, listing the names and burial dates in attempts to piece together the story of those interred. The site has gained attention and allows pictures to be posted as well as personal stories.

Citing and Sitting
The relationship of being both public and anonymous has never been in such a simultaneous space as it is now. The overwhelming notion being that whatever is done with public funding is considered free reign, even if the subject is extremely personal.

Hart Island is one of the largest tax-funded cemeteries in the world. As such, feelings as to whether to make the island a public park are mixed to say the least. Some have argued that this would be insensitive to the deceased’s memories while others maintain the only thing is should be is a park. In January, a Bronx community board (Community Board 10) gave its support to a law that would transfer ownership from the Department of Corrections to the Parks Department. This action has been noted as one of many filed to make the island more accessible to visitors. Though detractors argued that the park department runs on extremely limited resources and that a place as sensitive as Hart Island deserves an agency with enough resources to take care of it.

Arguably it’s not unusual for New York to have a graveyard become green space, other examples include Bryant Park, City Hall Park, Union Square Park and Madison Square Park to name a few. However, Hart Island is considered more difficult, not only as it still serves this function, but also for its location. Unlike the other parks, Hart Island must be sought, it’s not an easy place to stumble into.

As of yet, there are no plans existing that speculate what the island would look like if it did become a park. Nor is there a suggestion about improving transportation to get there. A fact of humanity is that people die, and having a place for them to be after that is necessary. Many of the arguments against Hart Island as a burial ground are arguments against the notion of death all together. If the island was turned into a park, where would the dead go? Perhaps the uncomfortability many have with Hart Island stems from the idea of anonymous death. Which is scary. Especially to those who live in mega-cities where anonymity and individualism are woven together so closely. 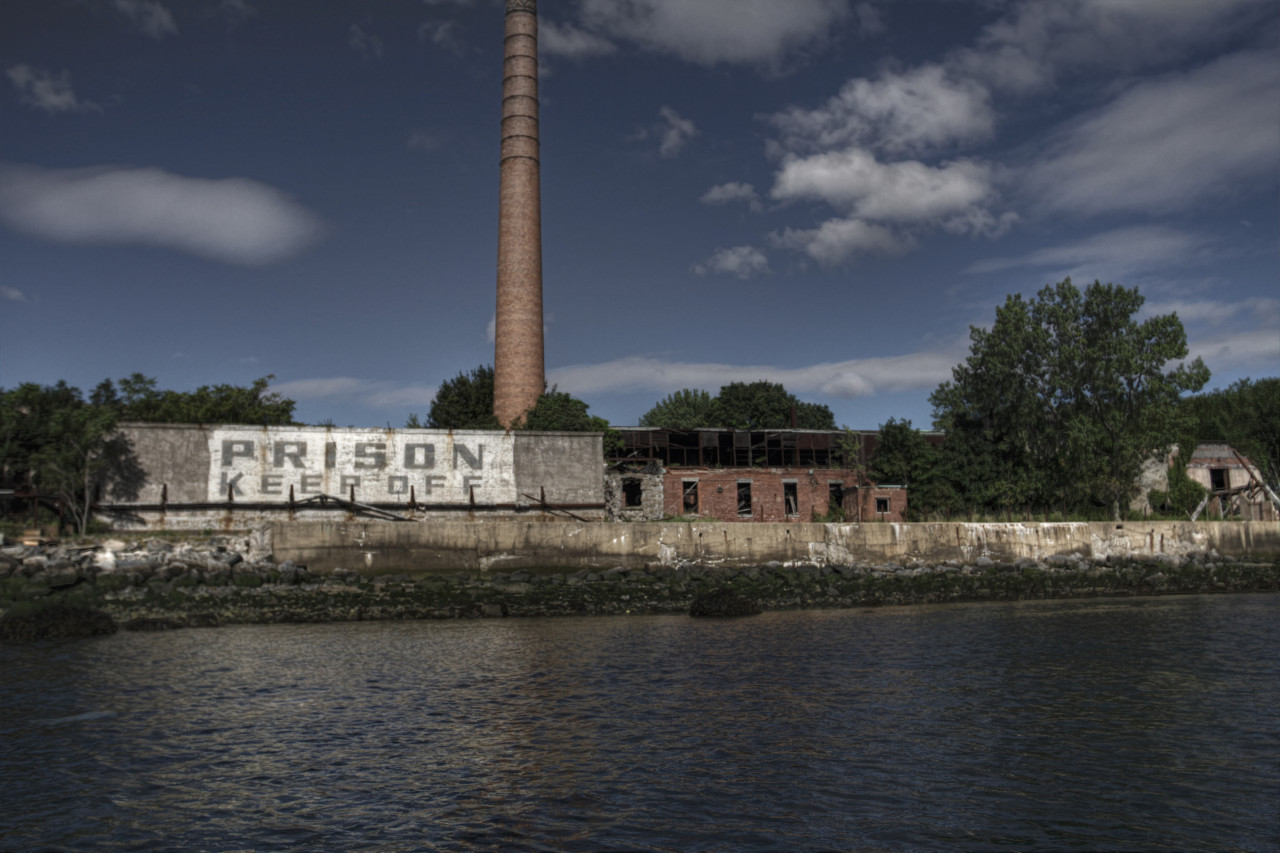 The current state of Hart Island.

Even the pragmatic question of what to do with the actual buildings on the site comes up in this discussion. Many of the structures are in such a state of disrepair that the only way they could survive without significant financial burden is as ruins. Ruins a public park would never grant full access to without significant safety precautions. Even spaces that were used in the island’s alternative life as a cold-war missile facility (from the 1950s to 1960s) would have to be turned up and out.

These are their stories.

They could be anyone’s. But does that mean we hold them in a ceremonial secrecy? Or engross them in the everyday? 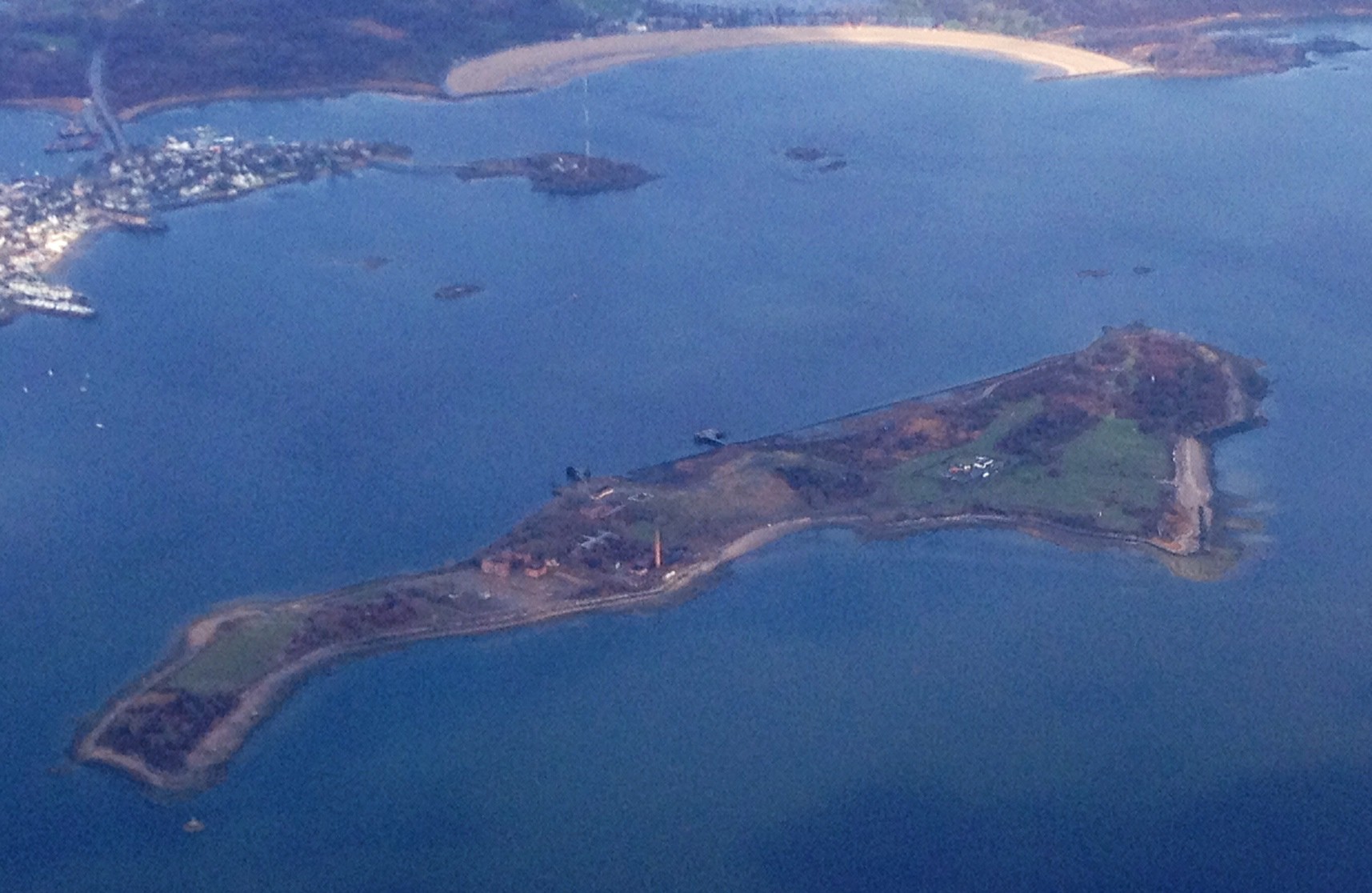