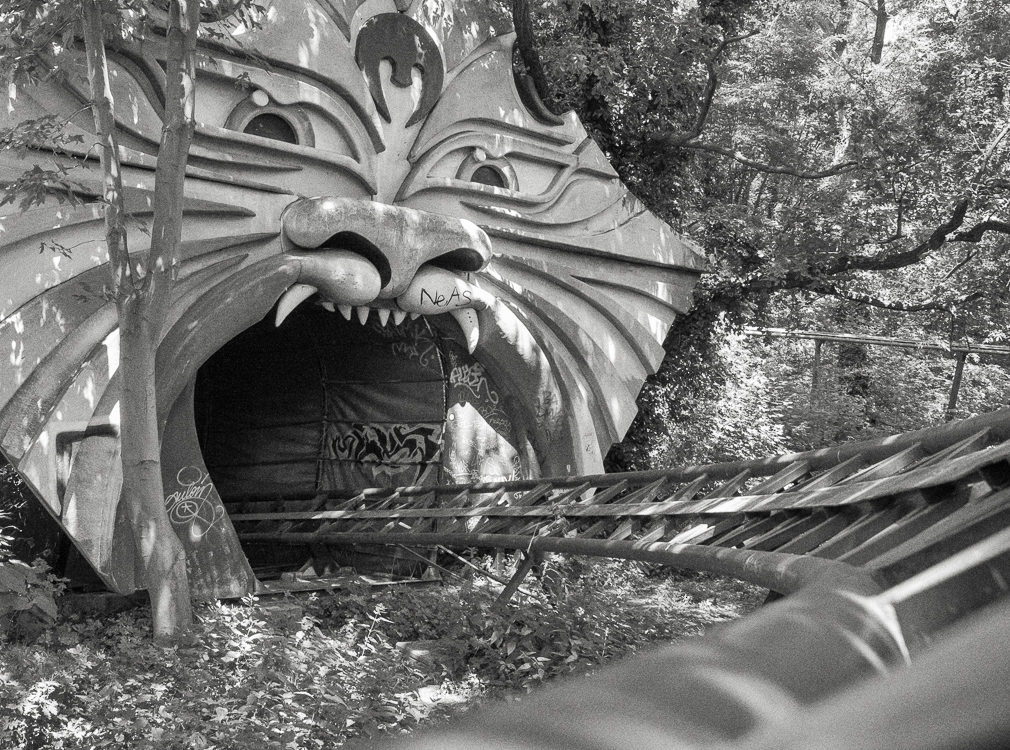 In the middle of Berlin, near the Spree river in Plänterwald forest, lies an abandoned amusement park deep in slumber. The Spreepark, formerly the GDR’s biggest amusement park, went bankrupt after its privatisation and has been waiting for its new destiny ever since. A huge, inner-city fallow of land shows glimpses of a place that was once surreal and enchanted; it is the big enthralment: an amusement park without amusement. 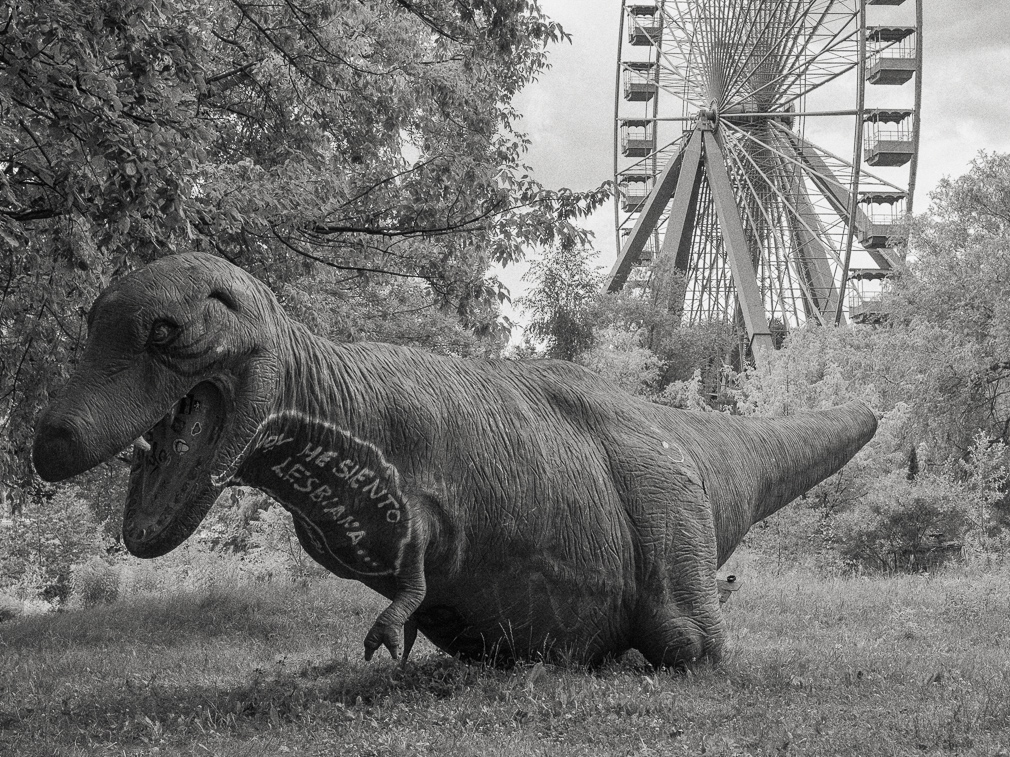 The park has remained closed since the Spreepark operators went bankrupt. Its gates now only open for single special events or guided tours. Over the years a strangely unreal place with no purpose grew in the middle of the lively city of Berlin. Plants grow over the bizarre bits and pieces of rotting fun rides; leaves, moss and cobwebs dominate the scenery. Rust, brittle wood and broken glass occupy places where once colourful fairground rides were animated by visitors. Boats in the shape of swans are piled up in the sand, their white skins covered with moss. The gigantic Ferris wheel creaks, an eerie, far-carrying sound in the park’s silence when the wind gets caught in the gondolas. The abandoned Wild West Village is a ghost town, the log ride’s waterway eaten away by rust and the ponds and lakes have mutated into a slimy, green muddy brew of algae and moss. Plastic dinosaurs still bare their teeth despite having been helplessly thrown on their sides and mutilated by souvenir hunters. They are the silent witnesses of a former, proud, and artificial paradise. 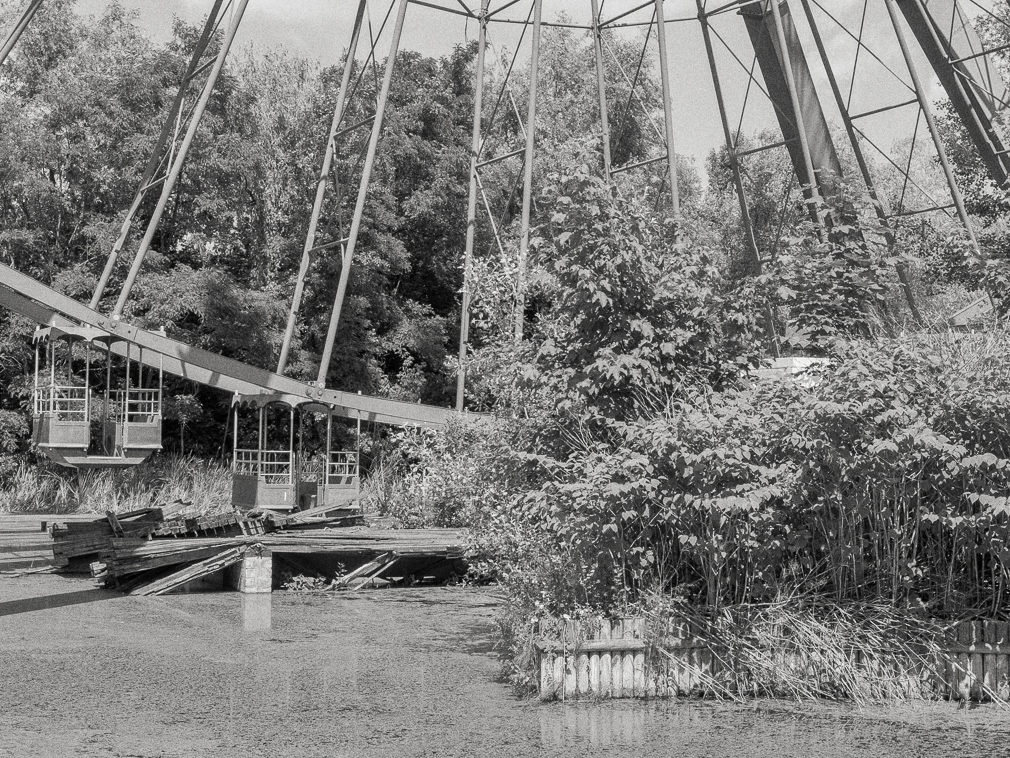 The Spreepark’s morbid charisma inspired a wide range of artistic works. Especially during the summer season, it hosts fashion shoots, boasts the site for the filming of movies and TV, performances and pop concerts. The enchanted remains of the park are alluring; however, the abandoned amusement park breeds nostalgia. 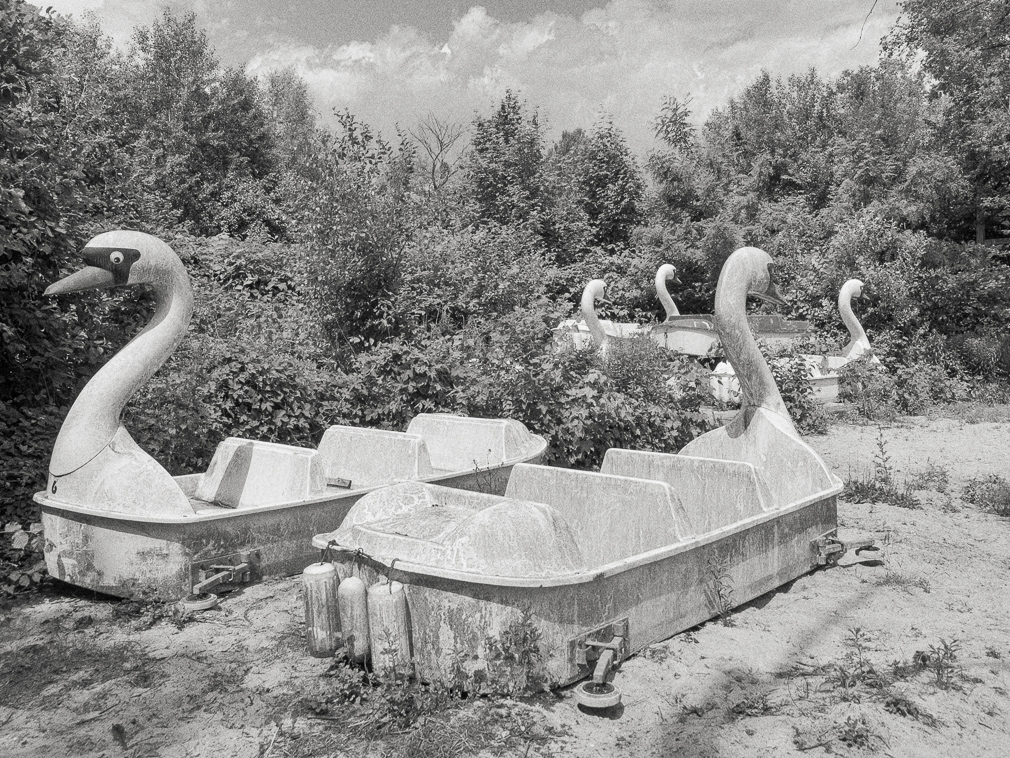 Opened in 1969 at the 20th anniversary of the GDR, the VEB Kulturpark Berlin was the “Disneyland of Socialism”. It spread over 30 hectare and boasted over a million visitors each year. It was the country’s only constant amusement park with imported fairground rides from non-socialist countries. Fondly called “Kulti”, the park was an integral part of children’s and family’s recreational activities for generations. It was deeply rooted in the collective consciousness of GDR citizens. 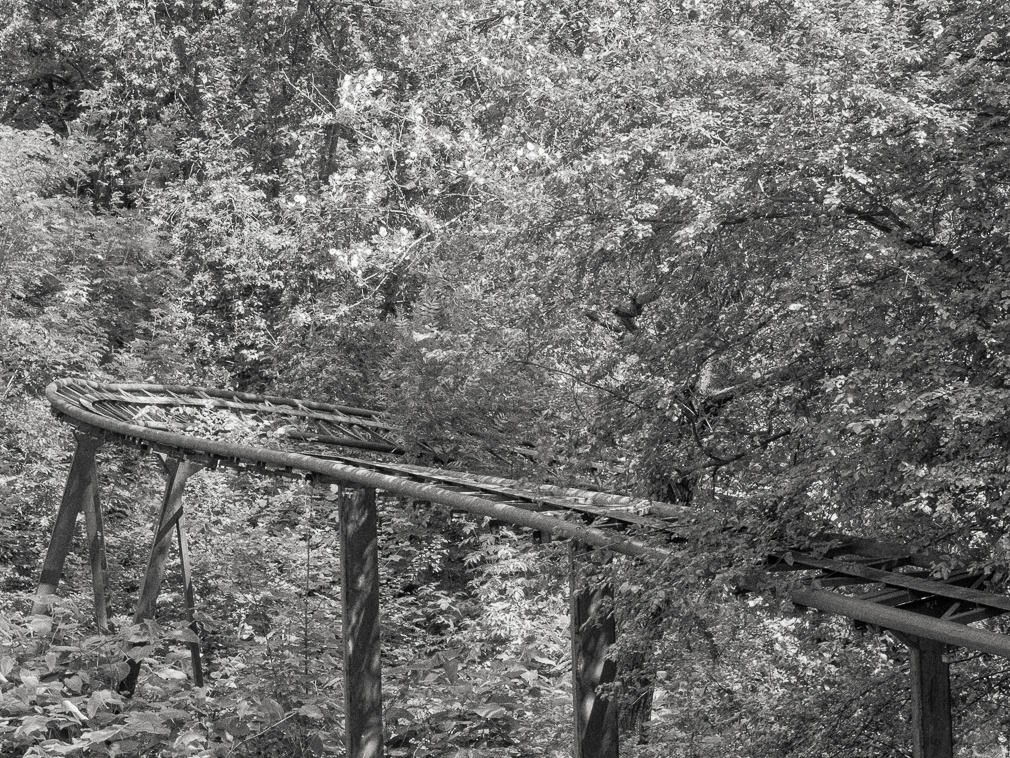 After the fall of the wall the area was privatised by the Berlin senate. It was to be transformed into an amusement park “according to Western standards”,  as the announcement read. Eventually in 1991 the award of contract went to the Spreepark GmbH corporation, owned by Norbert Witte, descendant of a traditional showman family from Hamburg. They got a leasehold contract: the area still belonged to the federal state of Berlin, and Witte paid a rent. Not only had Witte presented the most environmentally sustainable concept, but he was also in good contact with the ruling party of the CDU in Berlin thanks to his generous donations to the party. Although Witte had been previously convicted for a negligent carousel accident he had caused, he managed to act the part of the rich, respectable businessman from the West in Berlin. His full-bodied promises were eagerly received by the governors of Berlin in the rush of the Wende time – a whiff of megalomania on both sides. 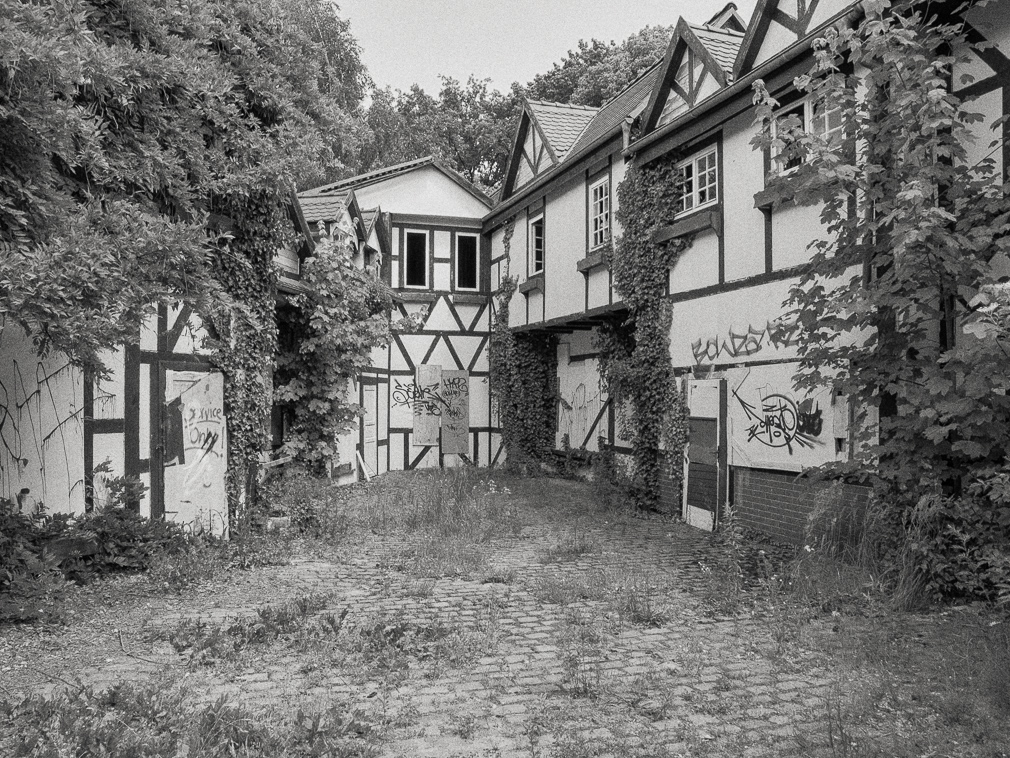 In the aftermath Witte rearranged the area. He expanded and modernised the amusement park by acquiring used fairground rides from the insolvency assets of “Mirapolis”, a Parisian theme park. In the beginning attendance rose to over 1.5 million a year. Witte dreamed of building the biggest amusement park in unified Germany, but ultimately this aspiration failed. 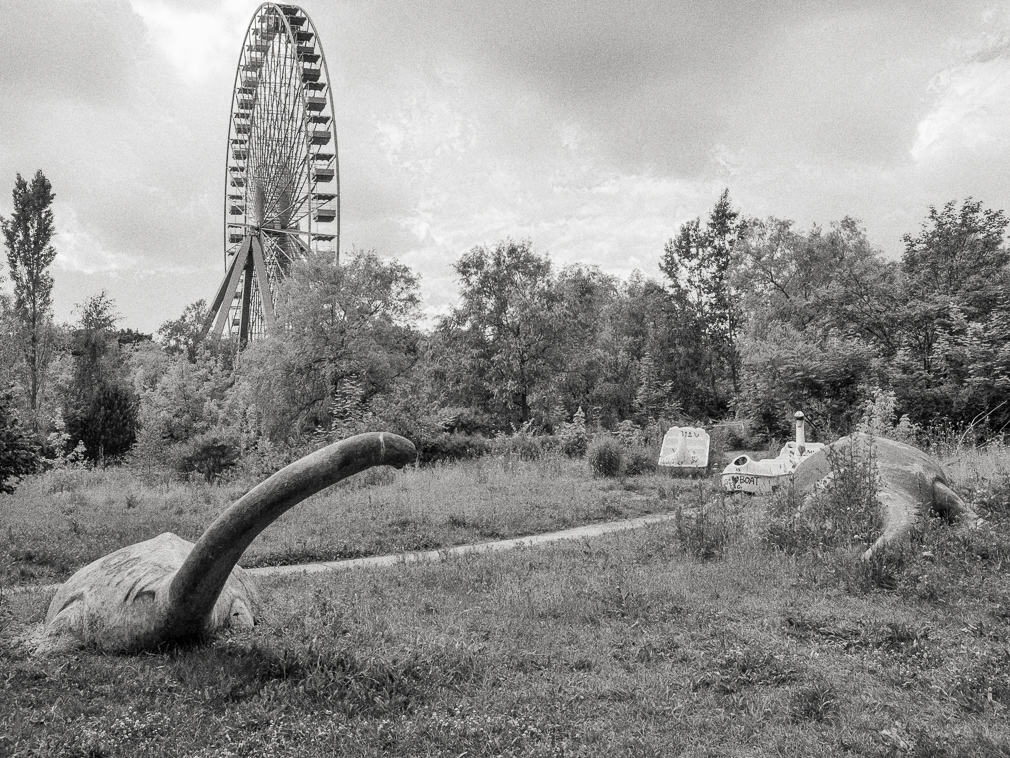 Through a series of managerial mistakes the Spreepark GmbH led the park to bankruptcy. By 2001 attendance had sunk to less than 400.000 a year. Witte exclusively blamed the precarious parking lot situation–a situation which created a limed number of parking space for cars and busses in the amusement park, rendering it less attractive for people from outside of Berlin. (According to Witte’s calculations it would have needed at least 3000 parking spots for the park to run profitably.) Unfortunately, due to regulations to protect the Plänterwald forest surrounding the park, extensive cutting down of trees and bulldozing the area for parking lots and access roads was prohibited. Even though Witte had been awarded a contract for an environmentally sustainable theme park, he repeatedly requested to exempt the amusement park from the landscape conservation area–all of which were declined. In 2001 the Spreepark GmbH went insolvent with a debt of 15 million Euro. 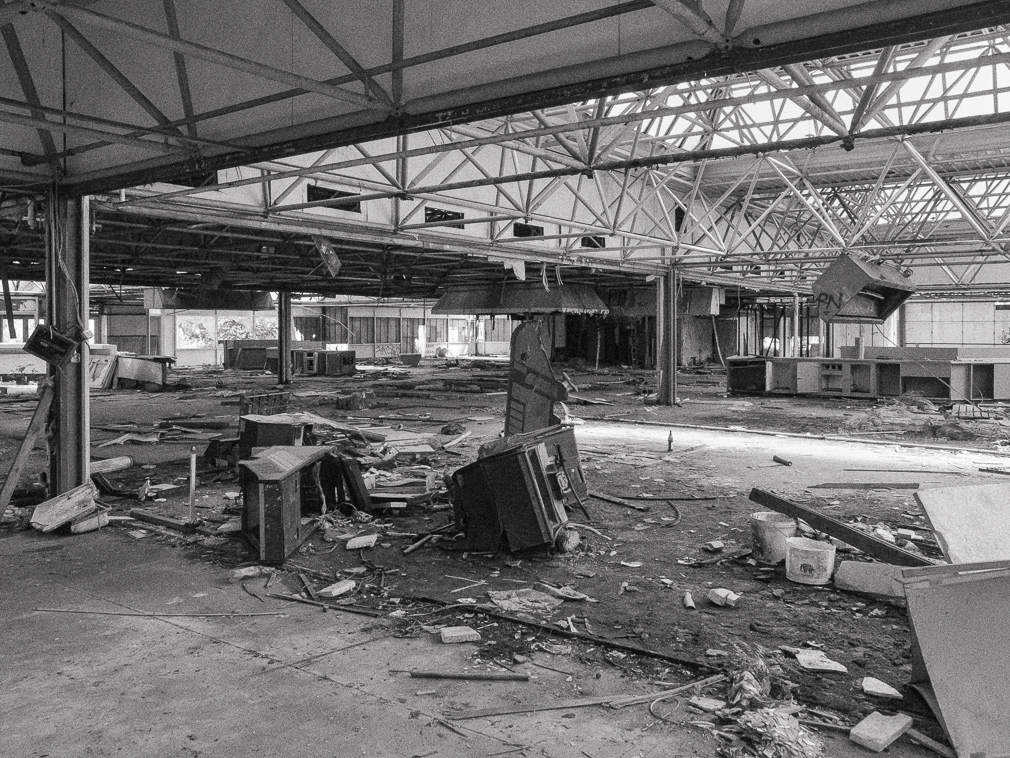 What happened next sounds like a screenwriter’s imagination run wild: After the crash in Berlin, in a cloak-and-dagger-manner.  Witte secretly packed some of his fairground rides into containers and shipped them off to South America. (“Spreepark secretly shipped off to Peru”, the Berlin newspapers reported.) He wanted to make a fresh start in the capital of Lima and open another theme park there. Unfortunately, several fairground rides were confiscated by customs, and others were ruined by the moist climate. All the new park’s earnings were spent on repairs. To make ends meet, Witte entered a drug deal; in 2004 he tried to smuggle 167 kilograms of cocaine to Germany by hiding the drugs in one of his fairground rides. The deal blew up in his face. Witte, who had travelled to Germany, was sentenced to seven years of imprisonment in Berlin. His son, who had signed the shipping documents without knowing of the drugs, was arrested in Peru and sentenced to 20 years of imprisonment. While the father was released on parole after four years, his son still serves in one of the worst prisons in Peru, where Europeans especially only survive if they can afford protection money. It is a tragic story of a family’s downfall. 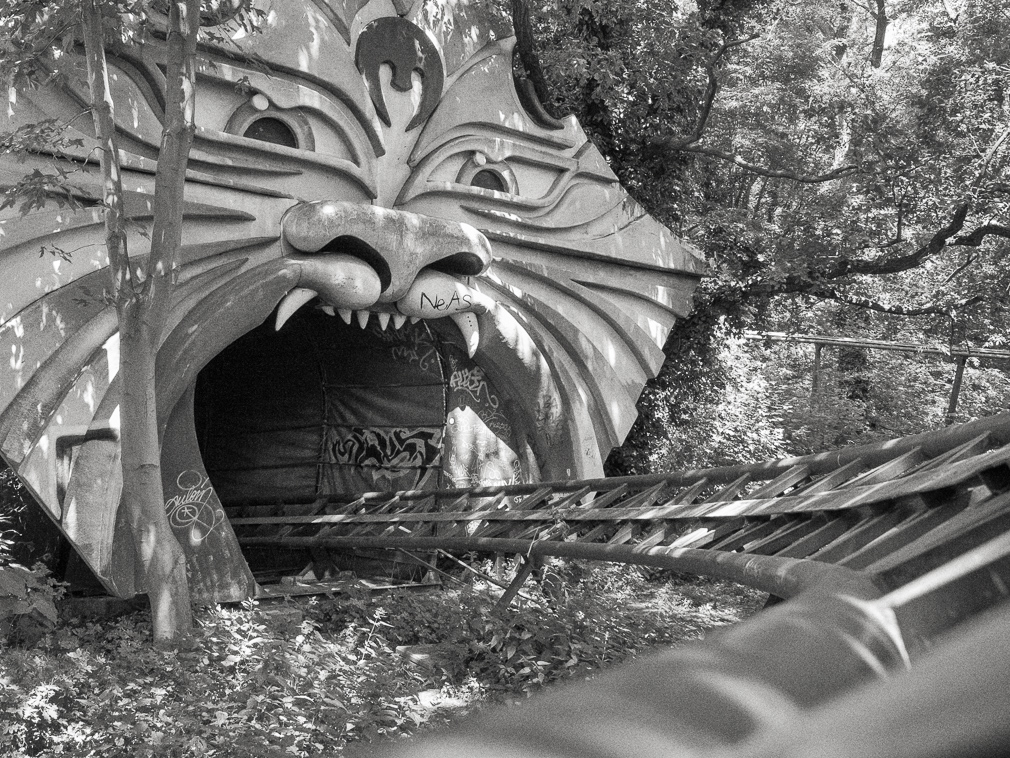 What is going to happen to the area of the Spreepark? For the federal state of Berlin the 30 hectare big park is a drain on the already empty treasury. They continue to pay huge sums for cleaning the estate of environmental poisons and for security firms, not to mention the loss of years of rents (the Wittes still owe the federal state more than 4 million Euros). All attempts to sell the park have failed so far. The foremost reason is the Spreepark GmbH’s immense bank debts, which have accumulated to almost 30 million Euros with the Deutsche Bank as principal creditor. A potential investor would have to buy them too, while the estate has an estimated sale value of 1.6 millions. Additionally all potential investors faced the same problems as the former manager. Their efforts to improve the frame conditions for an economically profitable amusement park (parking lots, infrastructure etc.) failed. This way, about a dozen negotiations with more or less serious prospective buyers were fruitless. In 2008 insolvency proceedings were finally stopped and the estate was released by the insolvency administrator, because it only caused costs. Since there was no new investor in sight, the estate was returned to Norbert Witte’s wife. She is the official contractor, as Witte is contractually incapable because of his criminal record. He had let her sign the contract in the name of the Spreepark GmbH. 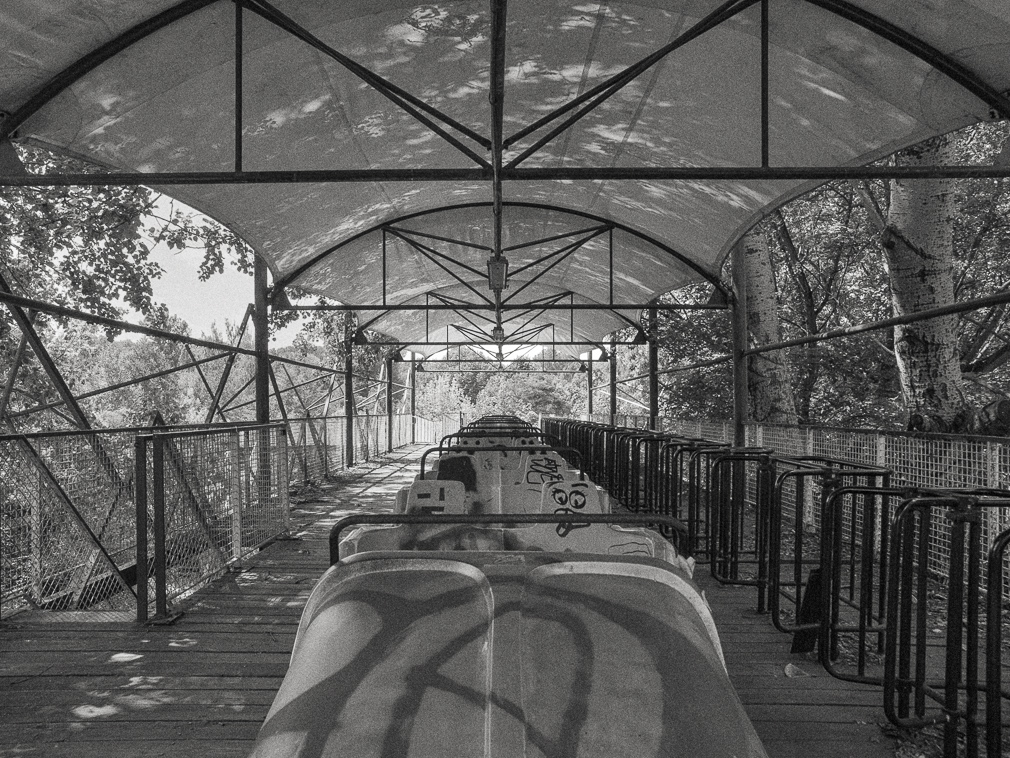 In July 2013 the finance office of Treptow-Köpenick arranged the leasehold contract’s compulsory auction to pay the real estate tax debts. The highest bidder was to take over the contract but not the Spreepark GmbH’s 30 million Euros debt. Two potential buyers fought nails and teeth, a private SPV and the Liegenschaftsfonds Berlin, which manages the federal state’s landed property. The highest bid had already reached 2.5 million Euros when the finance office in charge unexpectedly cancelled the auction. The city, concerned about the SPV’s integrity, was unwilling to take the risk of not getting its rents for a second time. There will not be a second auction; in March 2014 the Liegenschaftsfonds bought the leasehold contract from the insolvency assets, paying two millions to the insolvent Spreepark GmbH’s bank and one million to the finance office. This way the Liegenschaftsfonds, owner of the estate, has regained control over the area. Now this difficult, inner-city area in a delicate environment needs creative urban planning and a utilisation concept. 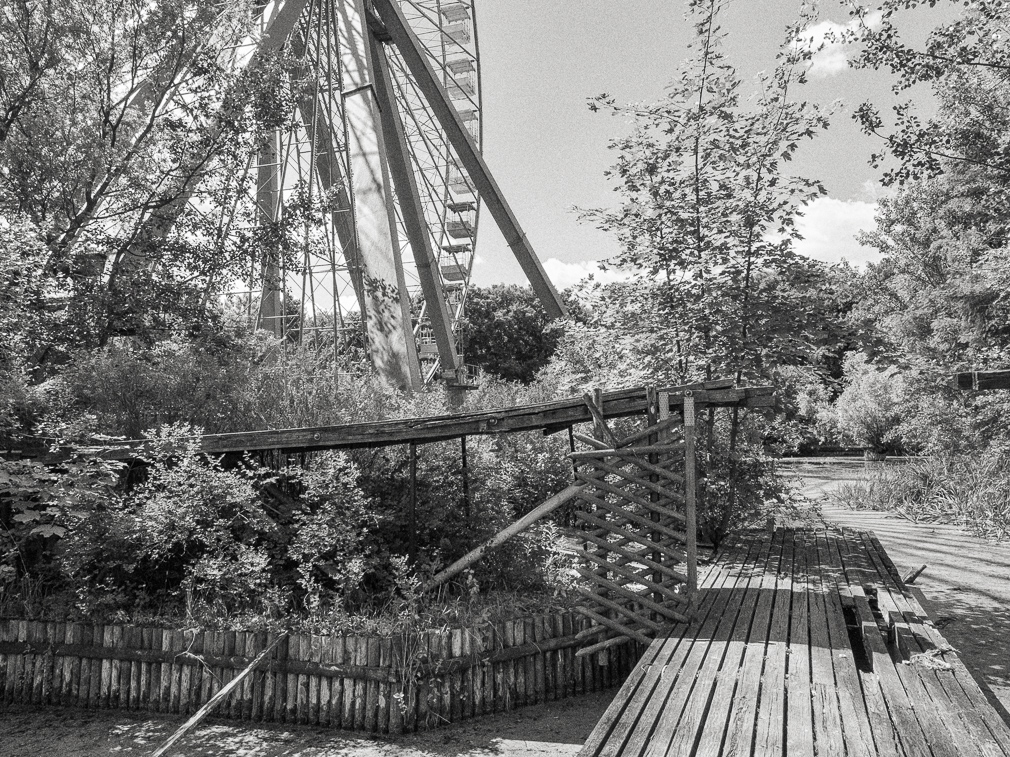 The leasehold contract is valid until 31 May 2061. Until then, according to the contract, the area must be used “exclusively as a theme park”. It is safe to assume that a profitable, big theme park is out of the question for the future. The borough of Treptow-Köpenick as well as residents prefer a small, environmentally friendly theme park for families, with playgrounds, a children’s zoo and gastronomy, with not more than 500.000 visitors a year. Other parties suggested to restore the area. Lately rumours have emerged that the Berlin senate planned to use parts of the area as developed land to build apartments. The district of Treptow-Köpenick declined this: according to the borough the building of apartments is categorically unapprovable and would meet resistance in any case. Two citizens’ initiatives (“Pro Plänterwald”/ “Bürgerpark im Plänterwald”) have also lobbied against the area’s large-scale utilisation – be it apartments or a big amusement park. They have committed themselves to the preservation of the “inner-city nature paradise”. It remains to be seen if in the end apartments will be built in this rather lucrative sector for investors. Considering the exquisite situation at the banks of the Spree river, it would possibly be luxury quarters. The discussion continues… 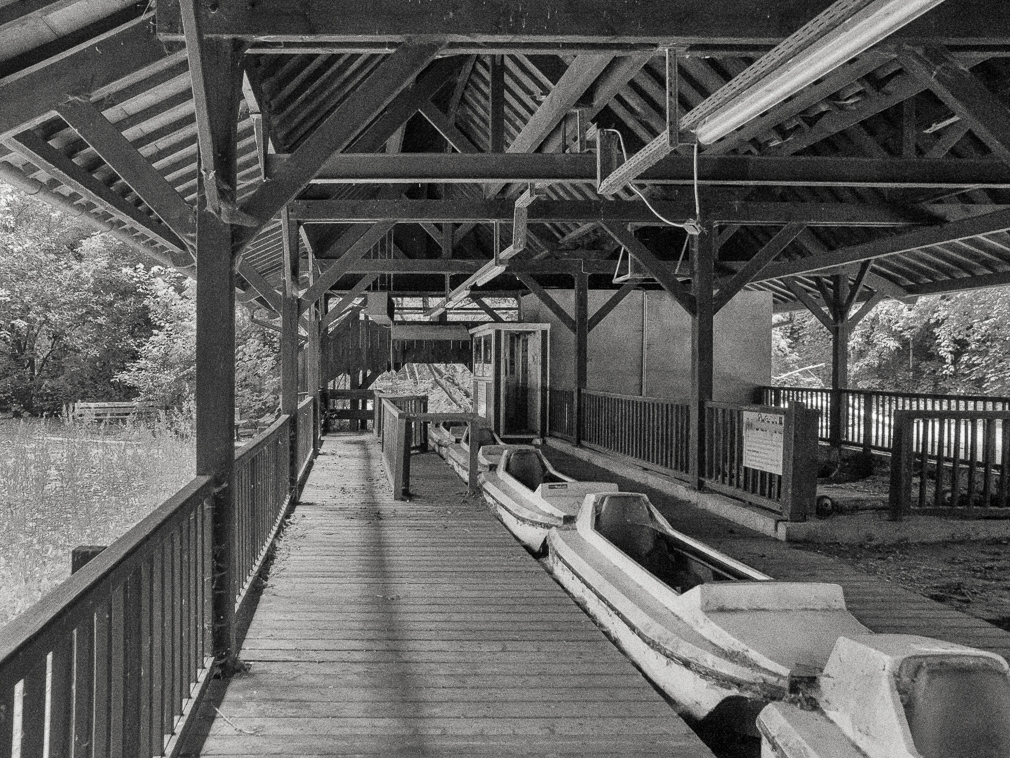 As of July 2014, the Spreepark–this nostalgic place from childhood–is an enchanted, fairy tale place where the contrast between once and now is alive and where vanitas is perceptible. Twinkling lights, cheerfulness and attractions, squeals of delight and the laughter of children has been replaced by an eerie silence, uncontrolled growth, morbidity and transience. Here the magic of haunted places, the “aesthetics of decay”, often quoted and now a modern cliché, manifests itself. The Spreepark is one of the special places in Berlin. It is special for providing people of two rivalling social systems with fun, and it is special simply because it is a place of fun which detoriates. The Spreepark added another page to the eventful, moving history of Berlin. In a certain way it is a symbol for the extreme swings in opposite directions in the history of Germany. The mere existence of this ruin teaches us how fragile the pillars of civilization are. Is it also an allegory of modern Germany’s society? 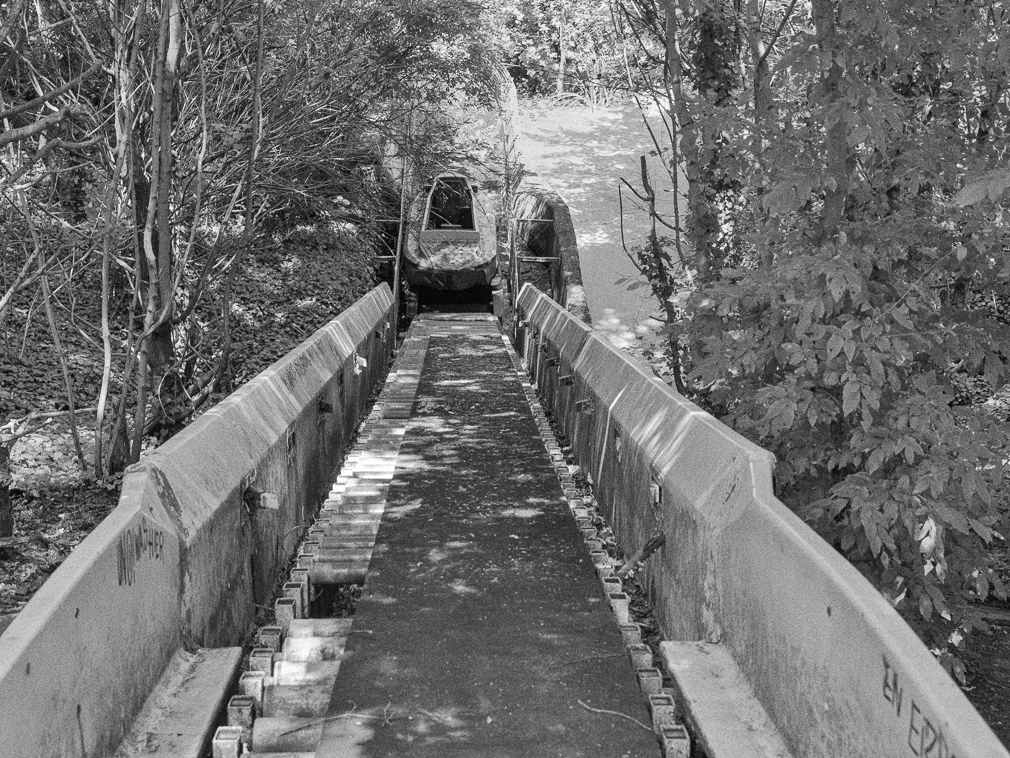 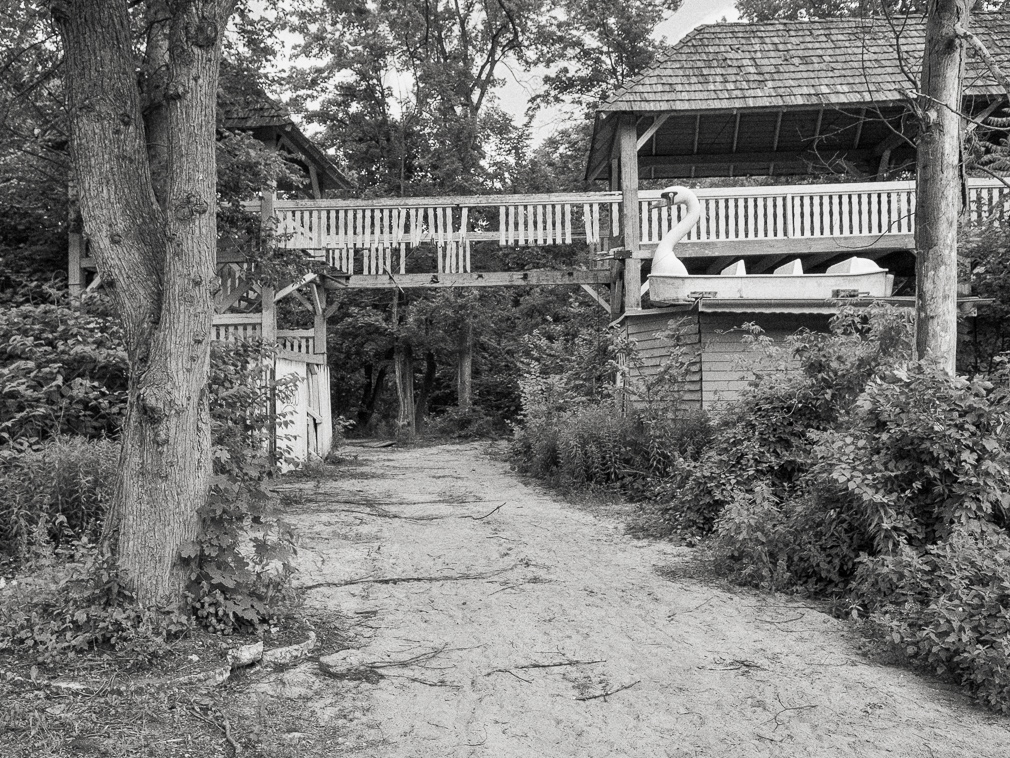 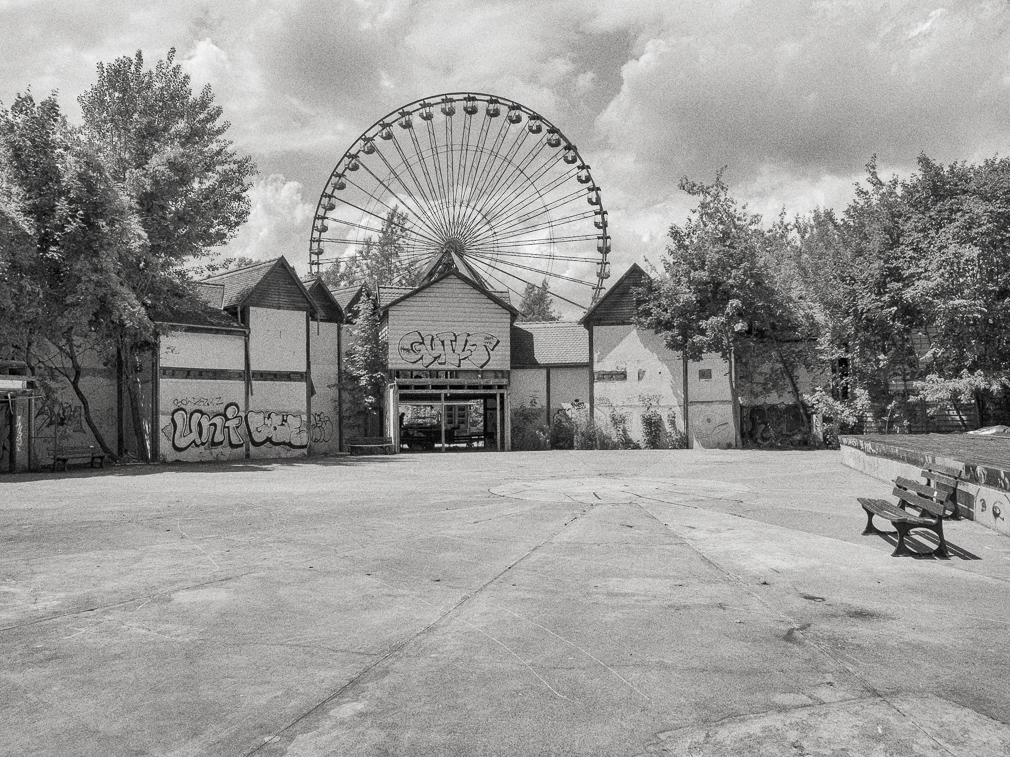 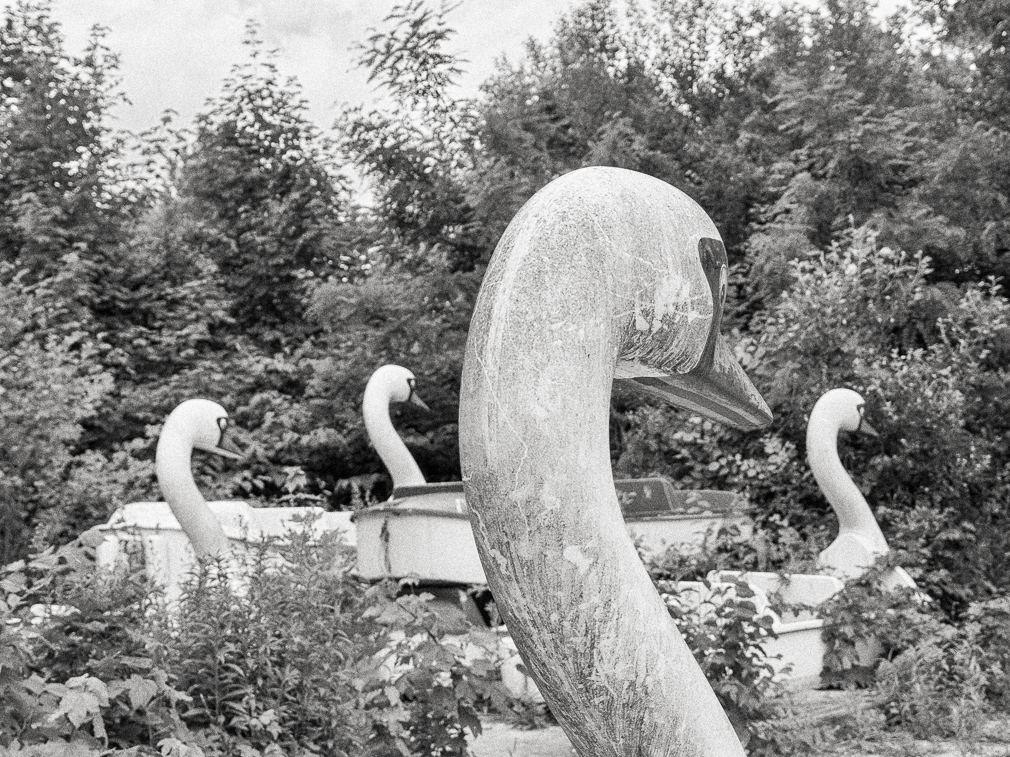 All images are courtesy of Jens Peter Kutz

Jens Peter Kutz
Jens Peter Kutz was born 1976 in Hamburg, Germany. After studying History and Political Science at the University of Hanover, he works as an Information Specialist in the archives of the newspaper “Frankfurter Allgemeine Zeitung” (F.A.Z.). Since 2010 he is engaged in the amateur photography. He covers a wide range of sujets; the preferred subjects are abstract ­graphic photography, architectural photography and photography of urban landscapes. In addition, recently he is devoted to the realization of artistic projects beyond photography (photograms, digital art, etc.). He has successfully participated in national and international photo competitions. Jens Peter Kutz is currently living in Frankfurt am Main and Hamburg.

add comment
Laura Armstrong
Loved reading this. The park has some very disingenuous behaviour attached to it. Witte was nothing more than a crook. I hope it is reclaimed with its "green" history. Brilliant podcast on Radio National Australia. Check it out. Creator is Jack Kerr. I am Australian and heard it on our local ABC radio.
Related