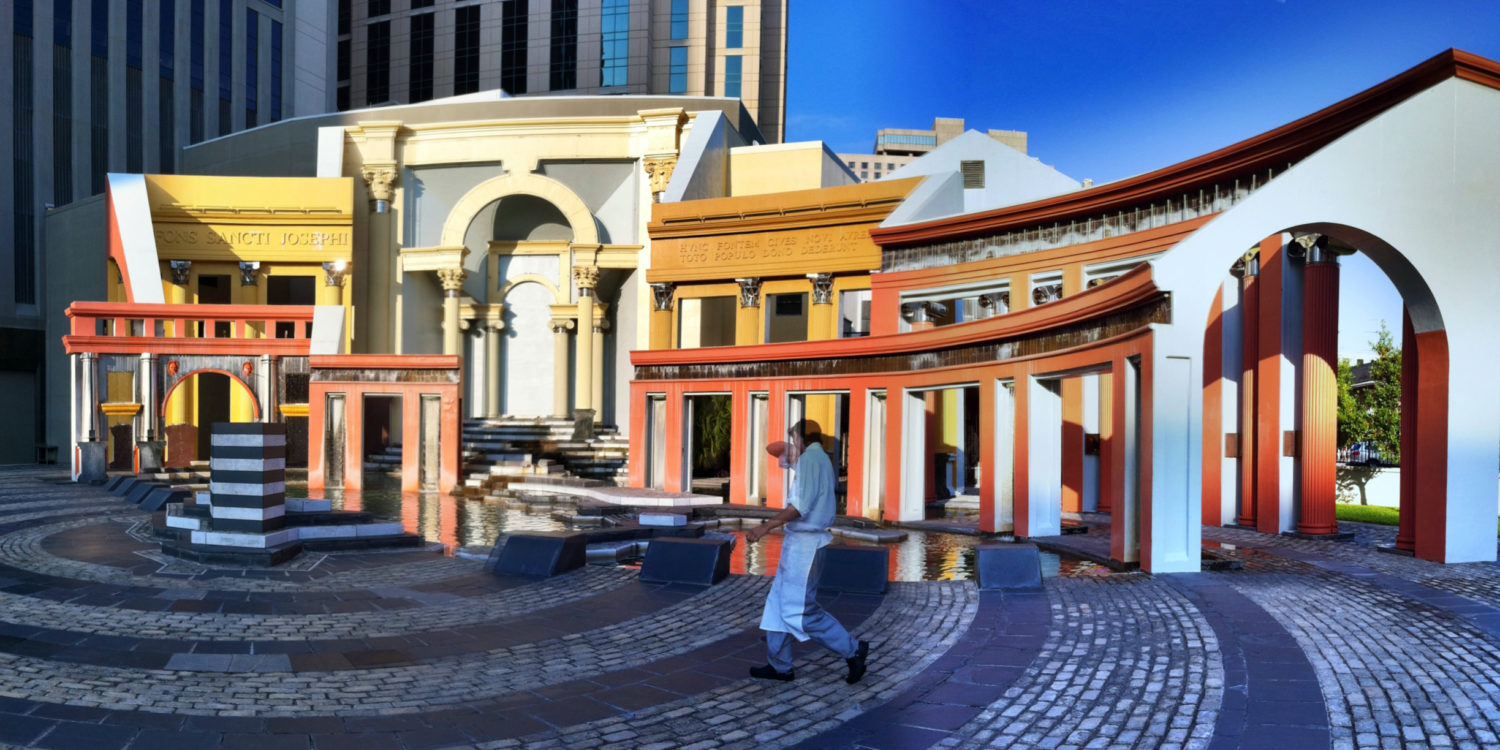 Peaux-Meaux: The Postmodern in New Orleans

New Orleans, a city typically associated with its collection of colonial architectural relics, is also a hotbed of postmodernism. The city's Central Business District exposes the failures inherent in modernist planning principles, generating a pockmarked urban condition that reflects the boom-and-bust cycles of late capitalism.

Postmodern structures, the preferred architectural expression of corporate industry in American cities from Dallas to Los Angeles, Atlanta to Orlando, have a major foothold in New Orleans, a city that to this day is closely associated with its collection of colonial architectural relics. The postmodern layer of development is a byproduct of the region’s robust resource-extraction industry, an economic driver that in the early 1980s shifted its corporate locus from New Orleans to Houston, prompting economic collapse in one city and erecting a wholly new set of icons in the other. As a result, the city suffers from a high concentration of vacant and only partially leased towers. Though iconic examples of postmodern architecture – Charles Moore’s famed Plaza Di Italia, SOM’s One Shell Square, HKS’s Entergy Centre, and Moriyama and Teshima’s Place St. Charles – pierce New Orleans’ skyline, they do so while surrounded by vast swaths of empty parking lots.

In this way, the postmodern towers built over the skylines of American cities during the late twentieth century have exposed the failures of the modernist planning principles that wiped away many historic parts of city centers in the name of progress and economic growth, and generated a pockmarked urban condition that reflects the boom-and-bust cycles of late capitalism. Today, these areas are ripe for exploitation by the forces of gentrification.

Postmodern structures, often clustered within designated business or commercial zones, were developed from the late part of the twentieth century beside the most historic parts of the city, and represent the channelled excesses of the economic development of recent eras. Their continued presence in today’s city directly impacts everyday life. This side-by-side positioning of historic district and late twentieth century business district is a contemporary condition that combines rigid historical designation with exuberant development. These categories, though discrete, exist simultaneously, often on the same block. The resulting plurality of articulation, form, and style creates today’s variegated cityscape. Because of this proximity and the central role traditional historic fabric plays in the city’s tourist economy, postmodern structures challenge prototypical notions of what actually constitutes historic fabric in the contemporary city. It is important to acknowledge architectural-historical plurality as, firstly, a vital and sustaining force, and secondly, a snapshot of a contemporary condition. In a city so defined by colonial relics and the parlor tricks of architectural history, what is the role of the postmodern artefact?

This series of images attempts a visual analysis of the postmodern condition in New Orleans. Included are streetscapes from the city’s Central Business District, its various arrangements of towers and parking lots, and visions of the heterogenous city. New Orleans is, to use the local manner of adding the French-ified “-eaux” to replace long “O” sounds, Peaux-Meaux.

One Canal Place is a thirty-two-story office and high-end shopping complex built over land that was at one time a part of the Mississippi River’s tidal estuary. The batture, drained in the twentieth century in order to extend the city’s footprint to its current location, housed sugar refineries until the 1970s. The Egyptian Revival style United States Customs House at the center of the image marks the original banks of the city. The first two phases of One Canal Place – the aforementioned tower and a shopping mall – were built in 1979 and 1982-3, respectively. The third phase, a mixed-use high-rise tower, is currently in early development. This picture is taken from the plaza of Harrah’s New Orleans, Louisiana’s only land-based gambling facility. Harrah’s was built in 1995 over the famed Rivergate Convention Center, which itself was built in 1950 over a mid-19th century commercial shipping and manufacturing district. From here, it is also possible to see the Sheraton New Orleans, a 480’ tall, 48-story hotel made of raw concrete exterior panels.   Built in 1985 by Farret and Tabher, the building is located on the downtown side of the Canal Street district, a two-block buffer between the Vieux Carre, the city’s historic core, and the Central Business District.

The state’s second tallest building, Place St. Charles is a postmodern icon designed by Moriyama & Teshima Architects in 1984. The building houses offices, ground-floor retail, and ten floors of parking, and is built on the site of the city’s famed St. Charles Hotel, said to be the “finest piece of architecture in the new world” at the time of its construction. The Saint Charles Hotel burned down and was rebuilt twice before finally being cleared in 1974 to make room for Place St. Charles. The current building showcases nonfunctional cast iron balconies along the first two floors meant to evoke the local vernaculars.

Built in 1978, Charles Moore’s Piazza d’Italia is located in the “Warehouse District” neighborhood of the CBD, where the largest collection of intact early American buildings remains. This area, close to the Mississippi River and traditionally commercial and mercantile in function, has, since the 1984 Louisiana World Exposition, been gradually converted into a gentrified, residential area. The Piazza sits on a half-empty lot, itself testament to the block size scale of Moore’s original vision that never came to fruition.

A wide swath of the “back of town” Faubourg Ste. Marie neighborhood was levelled to make room for mayor “Chep” Morrisson’s 1957 Civic Center project. In the manner typical of modernist urban renewal programs, an entire neighborhood was replaced with a series of towers housing a new city hall, the central post office, central library, state Supreme Court and Louisiana state office, all organized around a central, open space: Duncan Plaza. This complex came at the expense of New Orleans’ most important Jazz neighborhood within which stood Louis Armstrong’s boyhood home at 1303 Perdido; this structure, like the rest of the so-called slum, was demolished to make way for the Civic Center. 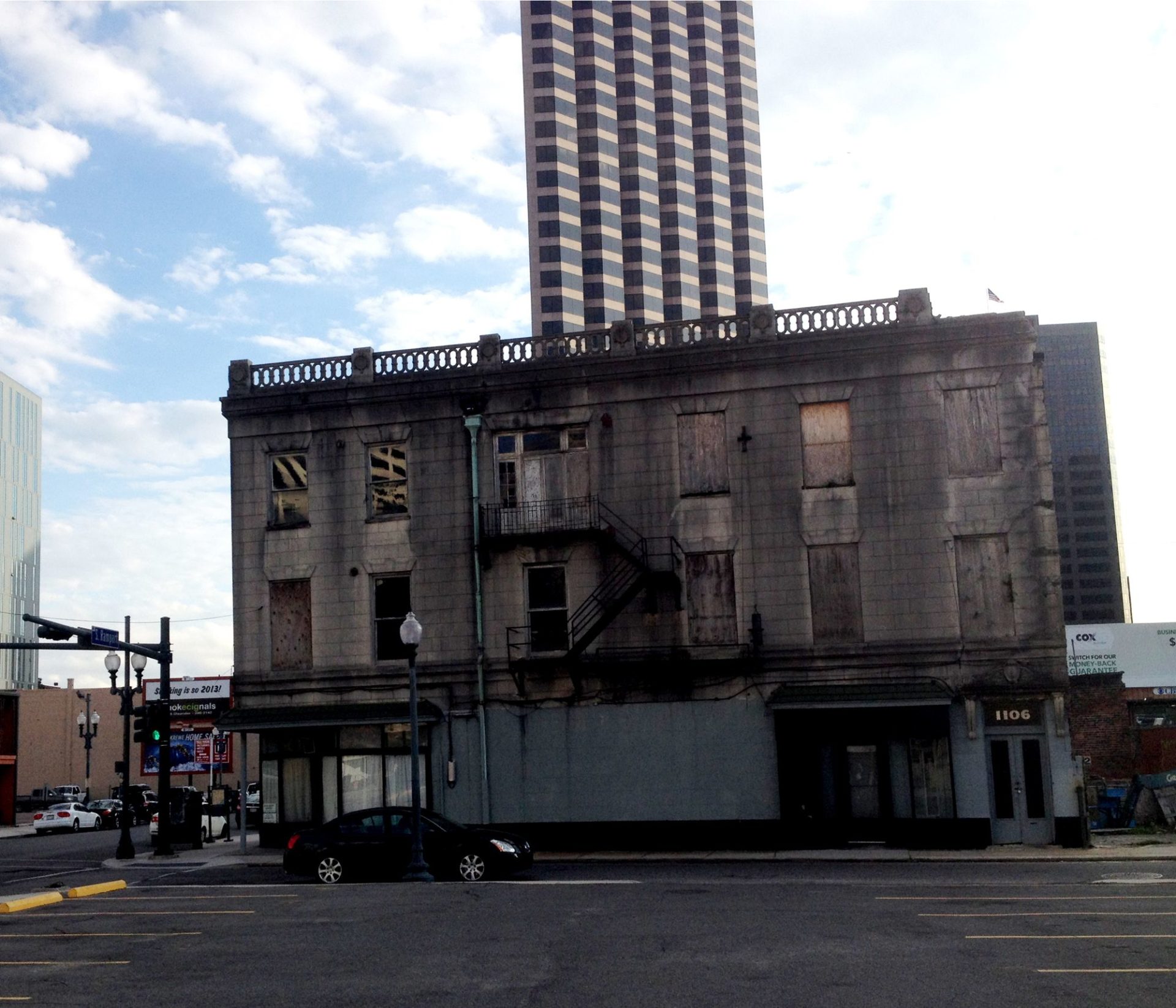 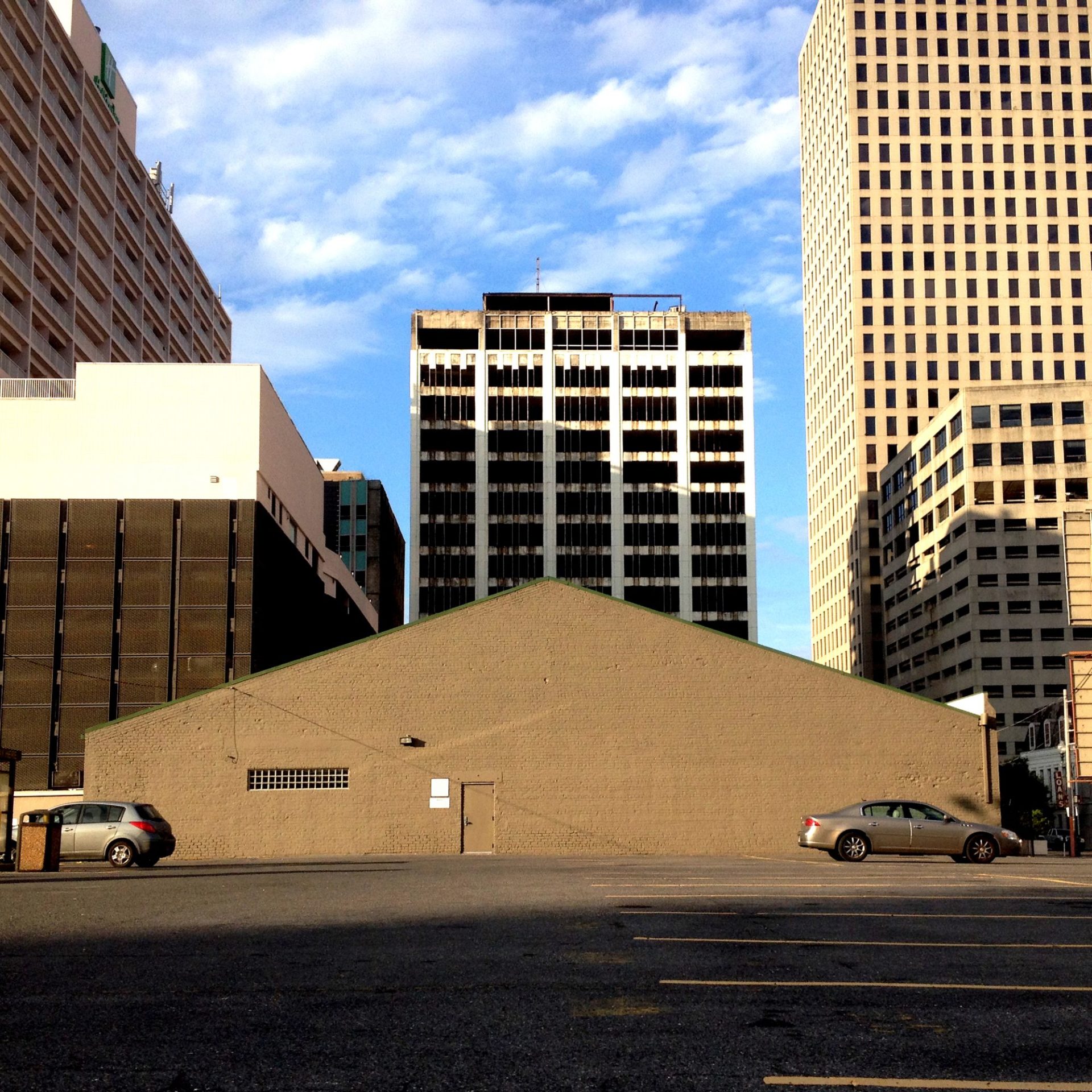 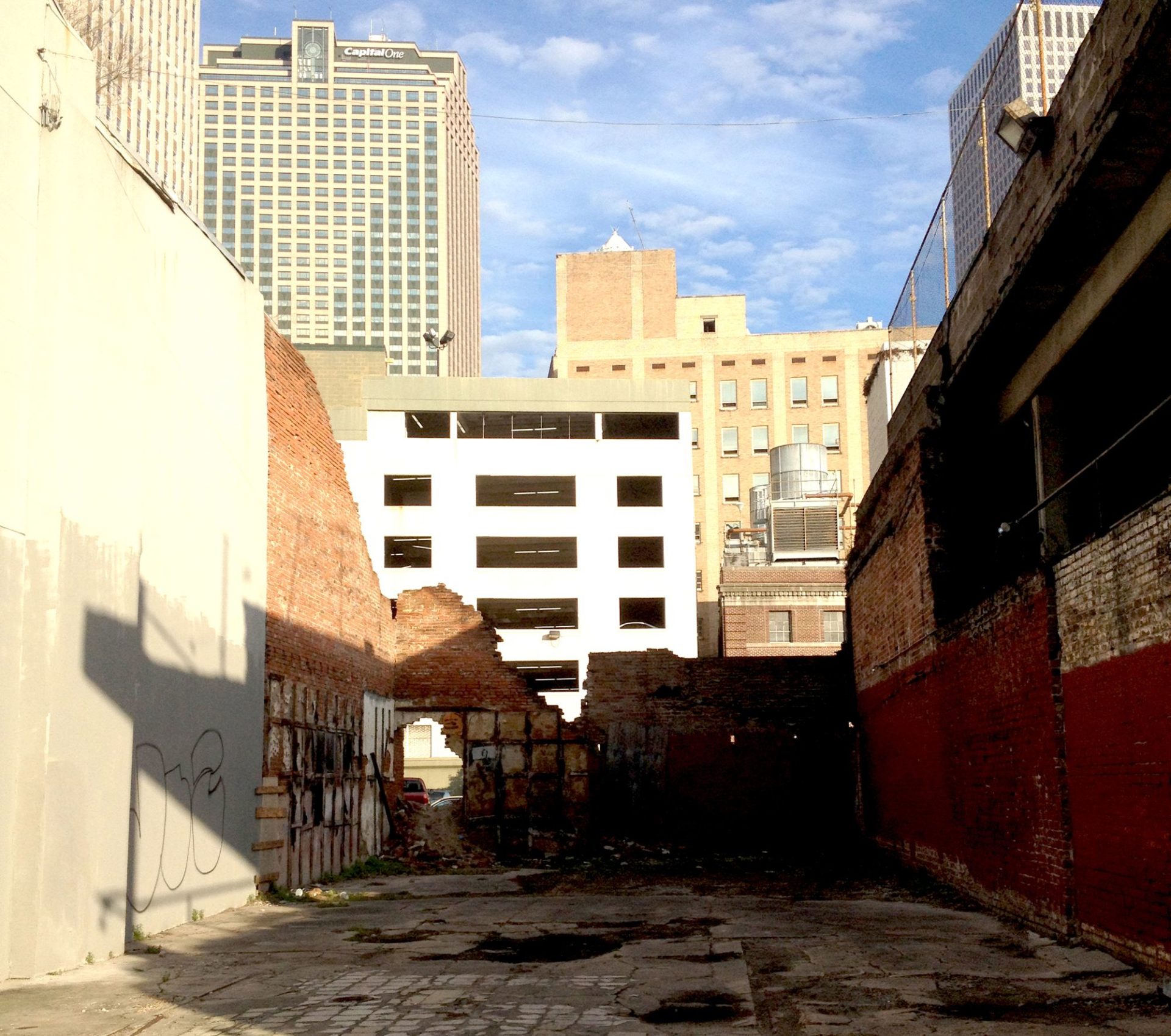 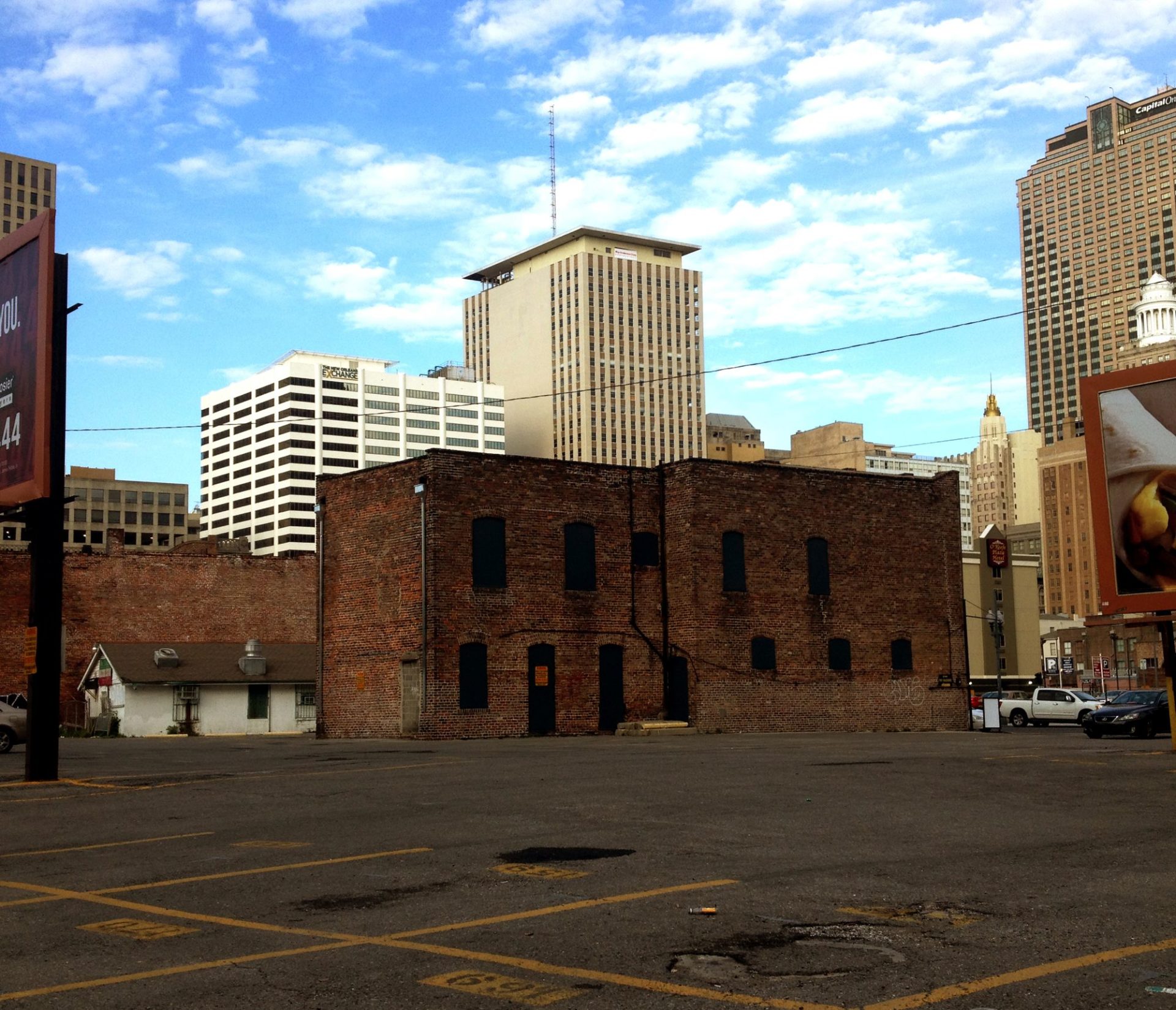 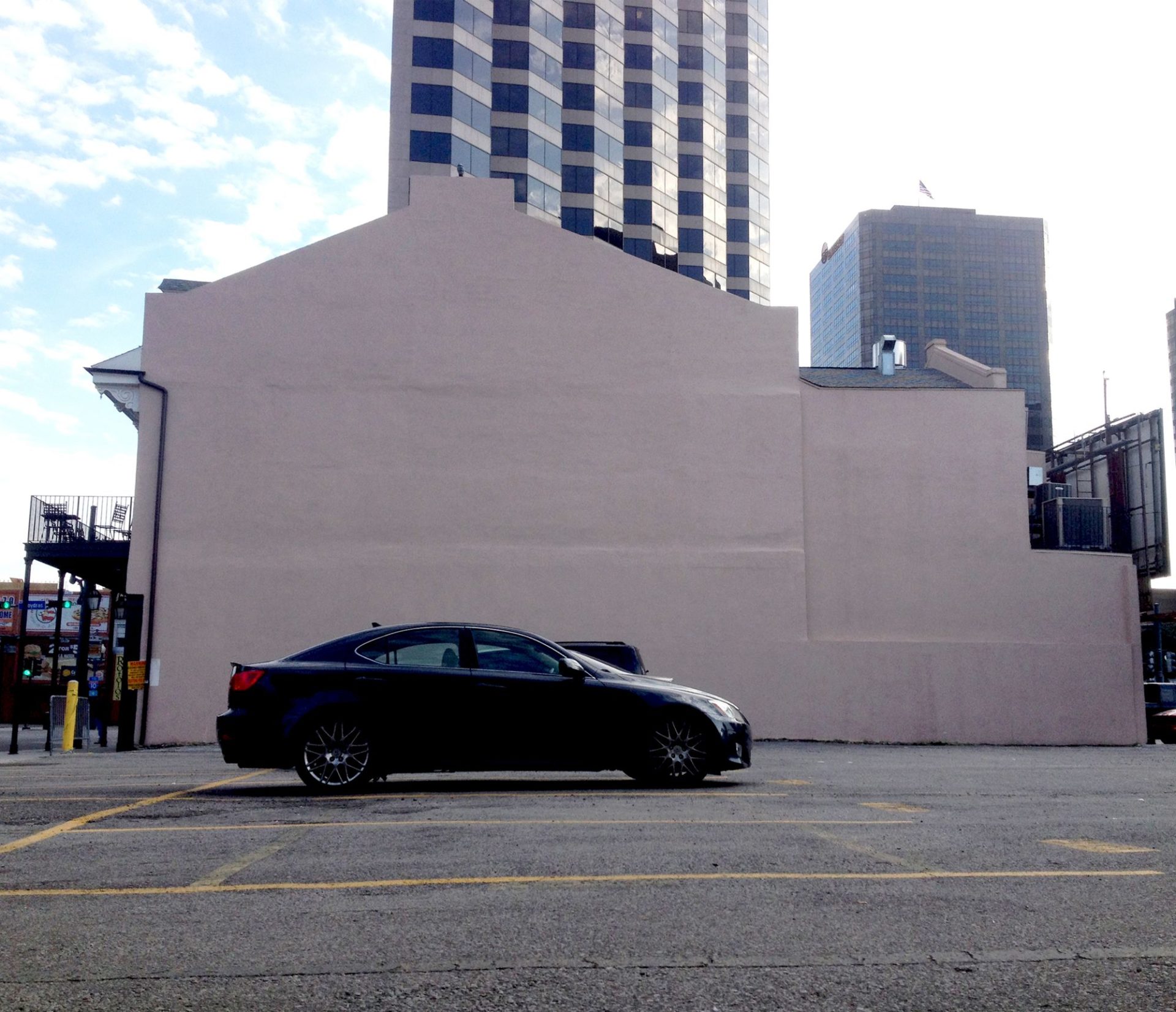 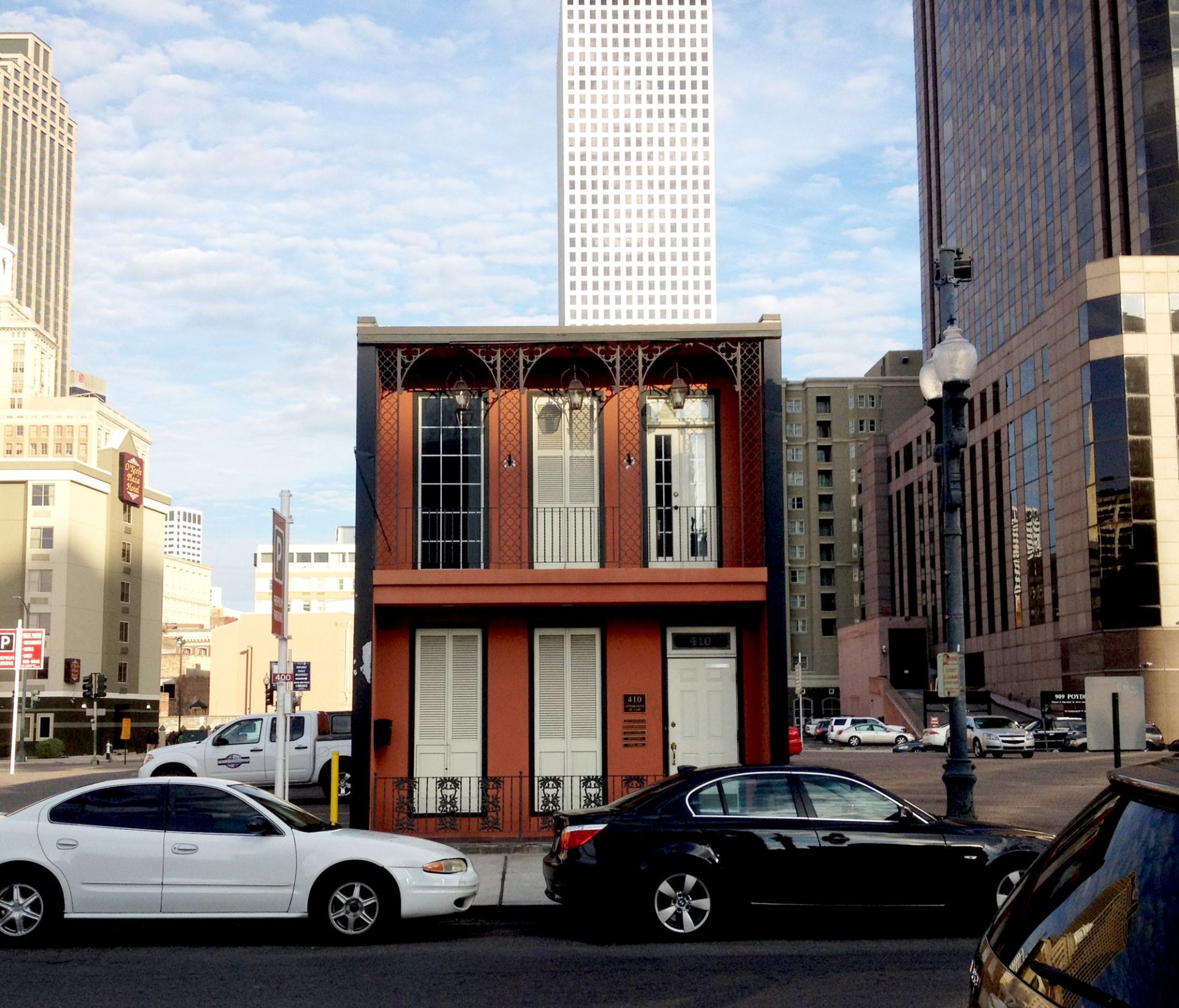 Today, the few remaining buildings from the more commercial parts of the neighborhood, like the Eagle Saloon & Oddfellows Hall, where major musical pioneers like Buddy Bolden and Armstrong once played, currently sit empty. Similarly, the State Supreme Court moved to offices in the Vieux Carre in 2004 and the Louisiana State offices moved to nearby Benson Tower in 2009, resulting in the demolition the two buildings that they had previously occupied. Plans routinely surface to move City Hall’s offices from their current 11-story modernist slab building to any one of several existing towers. Duncan Plaza, typically an encampment for the city’s homeless, is usually fenced-off and overgrown.

Nearby Poydras Street, part of an interconnected series of wide “downtown circulator” streets aimed at accommodating the business district, is a six lane avenue lined with towers, including the First Bank and Trust Tower, an up-lit Ferrissian skyscraper with dramatic setbacks, red granite cladding, and bronze-tinted glass ornamentation. Its extruded columns of terraced and rounded sections are capped with a false mansard roof. This building was designed in 1987 by Welton Becket and Associates and is the fifth tallest building in the city.  One Shell Square, the city’s tallest tower, built by SOM in 1972 lies further down Poydras, as do the thirty-two-story Texaco, twenty-eight-story Pan American Life, and twenty-story Amoco towers. 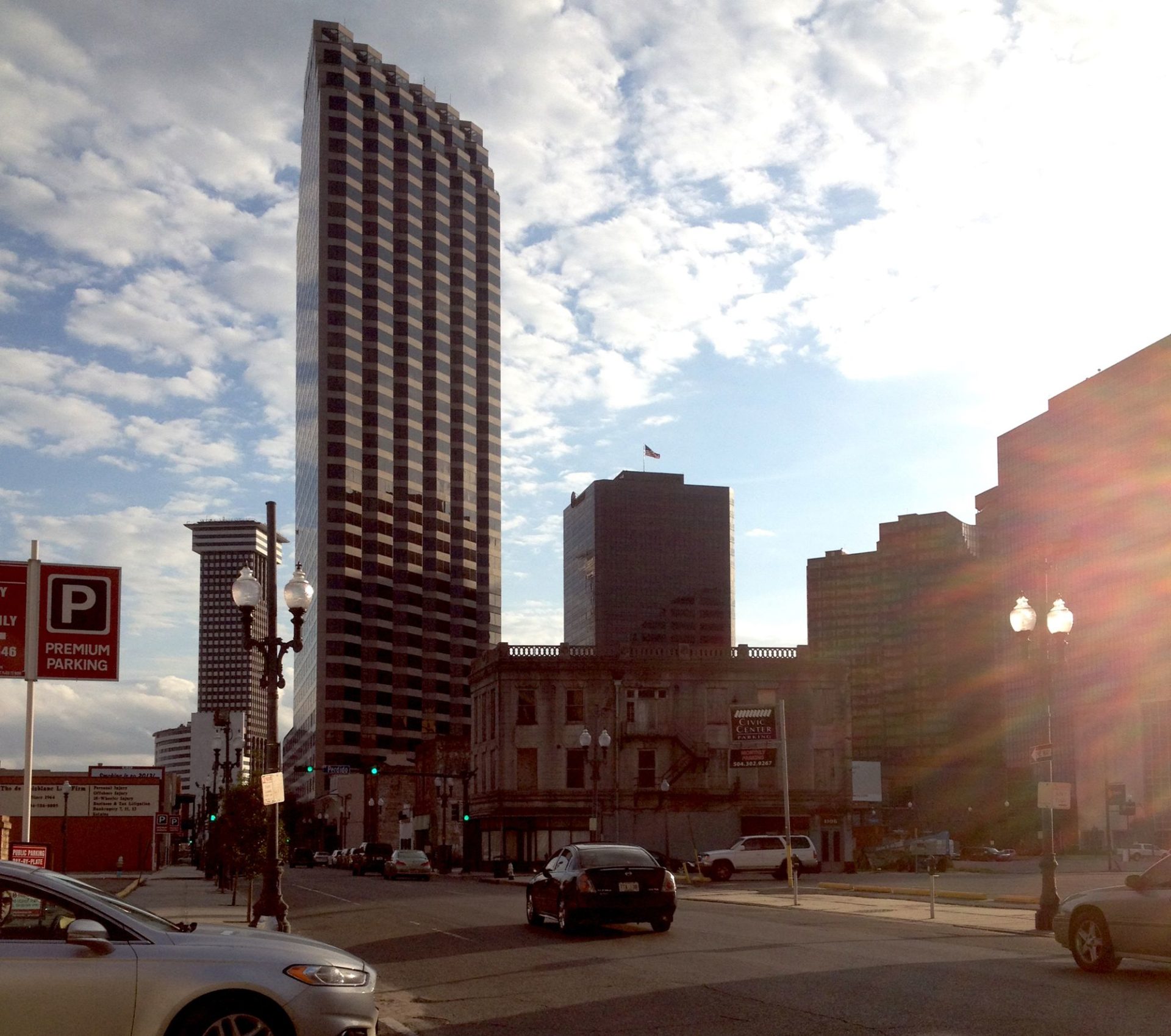 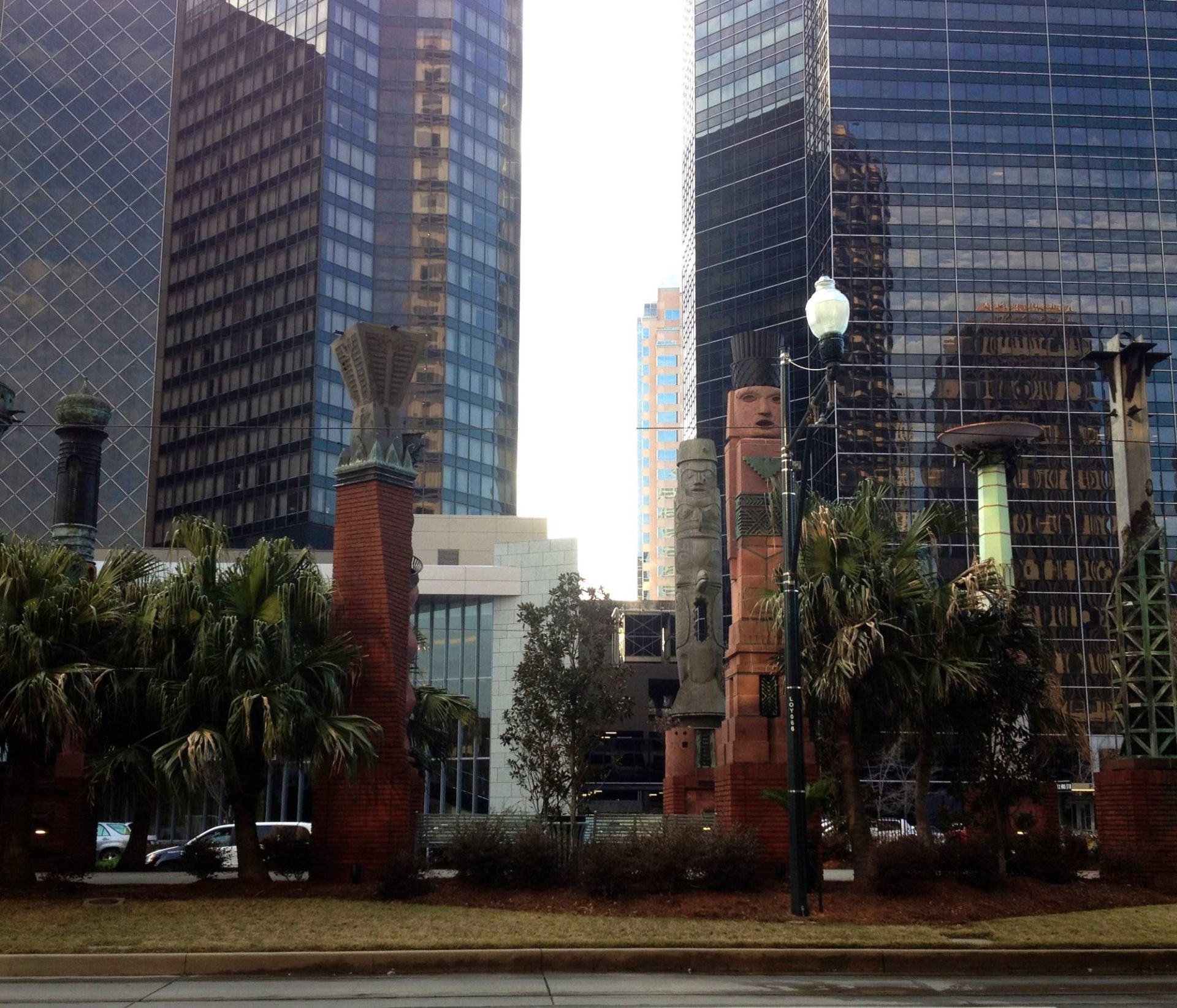 Just across the street from the Civic Center, HKS’s Entergy Centre tower houses the city’s sole Fortune 500 company, the utility conglomerate Entergy of New Orleans. The building’s fantastically gridded facades, coupled with geometric variations in plan and mass, create the city’s biggest optical illusion. This building is located across the street from a cluster of interconnected towers that include the Welton Becket and Associates-designed Hyatt Regency New Orleans, HOK’s Benson Tower, a second Entergy Tower, and the Curtis and Davis-designed Mercedes-Benz Superdome. Built over the former Girod Street Cemetery, this complex represents one of three clusters of office and hotel towers built in the 1970s and 80s in the aftermath of the city’s Civic Center project. 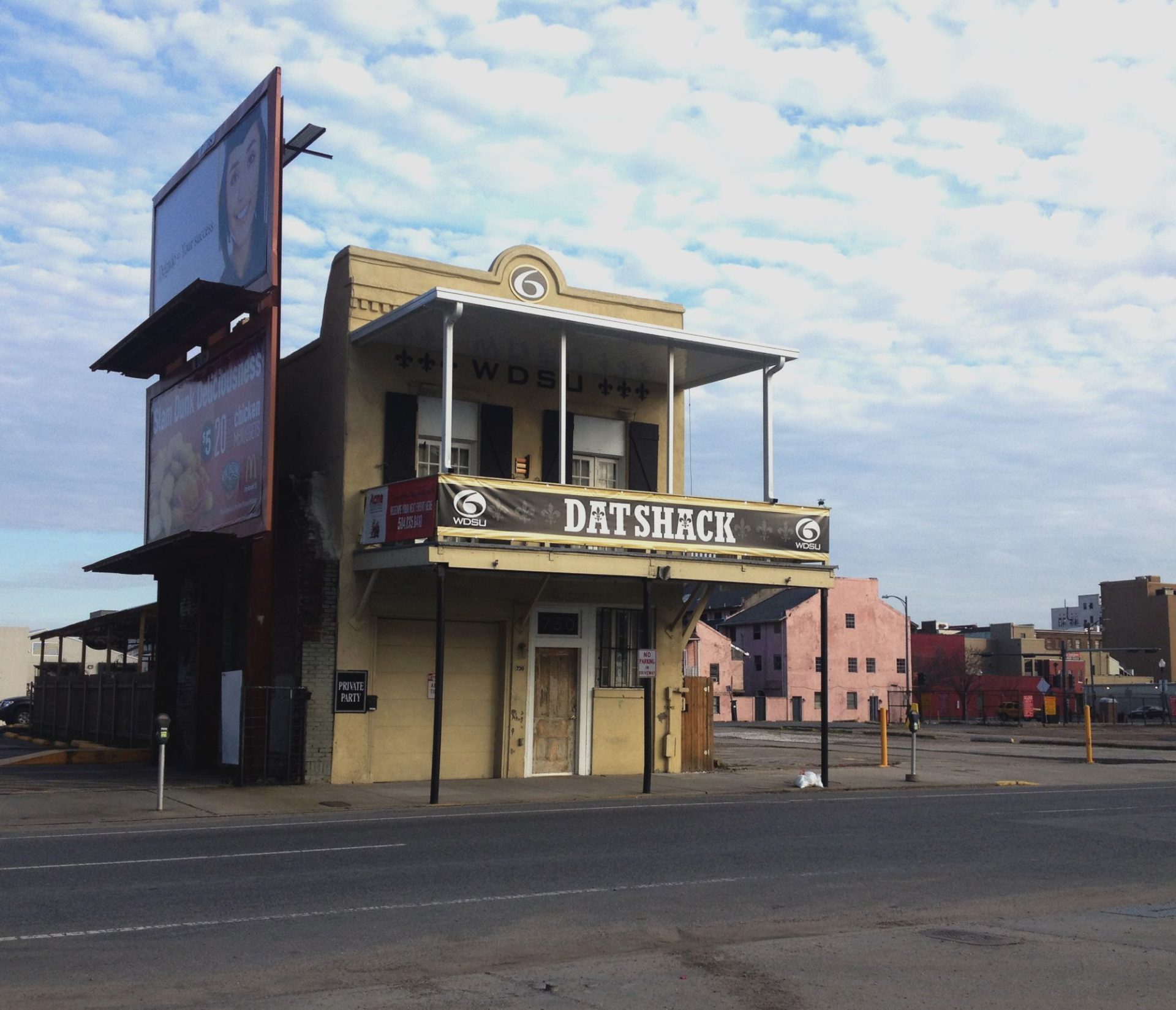 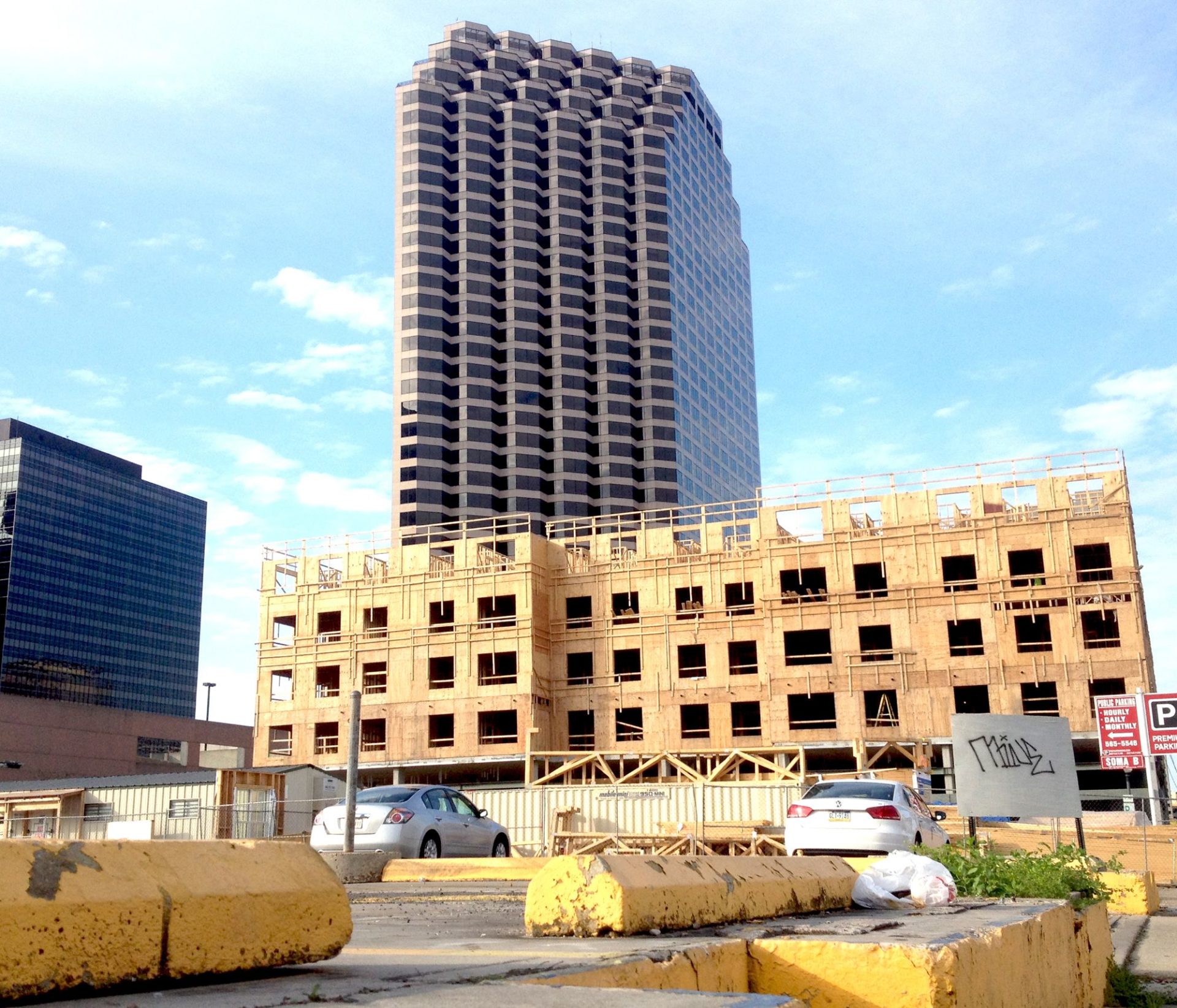 One of the few remaining original structures in this part of the CBD, 730 South Rampart Street currently operates as a sports bar catering to patrons attending professional American football and basketball games at the nearby Mercedes-Benz Superdome and Smoothie King Center. This two-story townhouse is an example of local vernacular antebellum types. A new mixed-use project, currently under construction, seeks to develop these lots. This $200 million “Market South” development, a name that alludes to the once thriving city market, located on Poydras and demolished in the late 1960s to widen the street to its current breadth, aims to bring nearly 600 apartments and 170,000 square feet of retail space to the area. The first phase of this project, “the Paramont,” a five-story apartment block, is one of several similar projects currently being built along part of a three-block stretch of empty land between Poydras and the Plaza Tower. 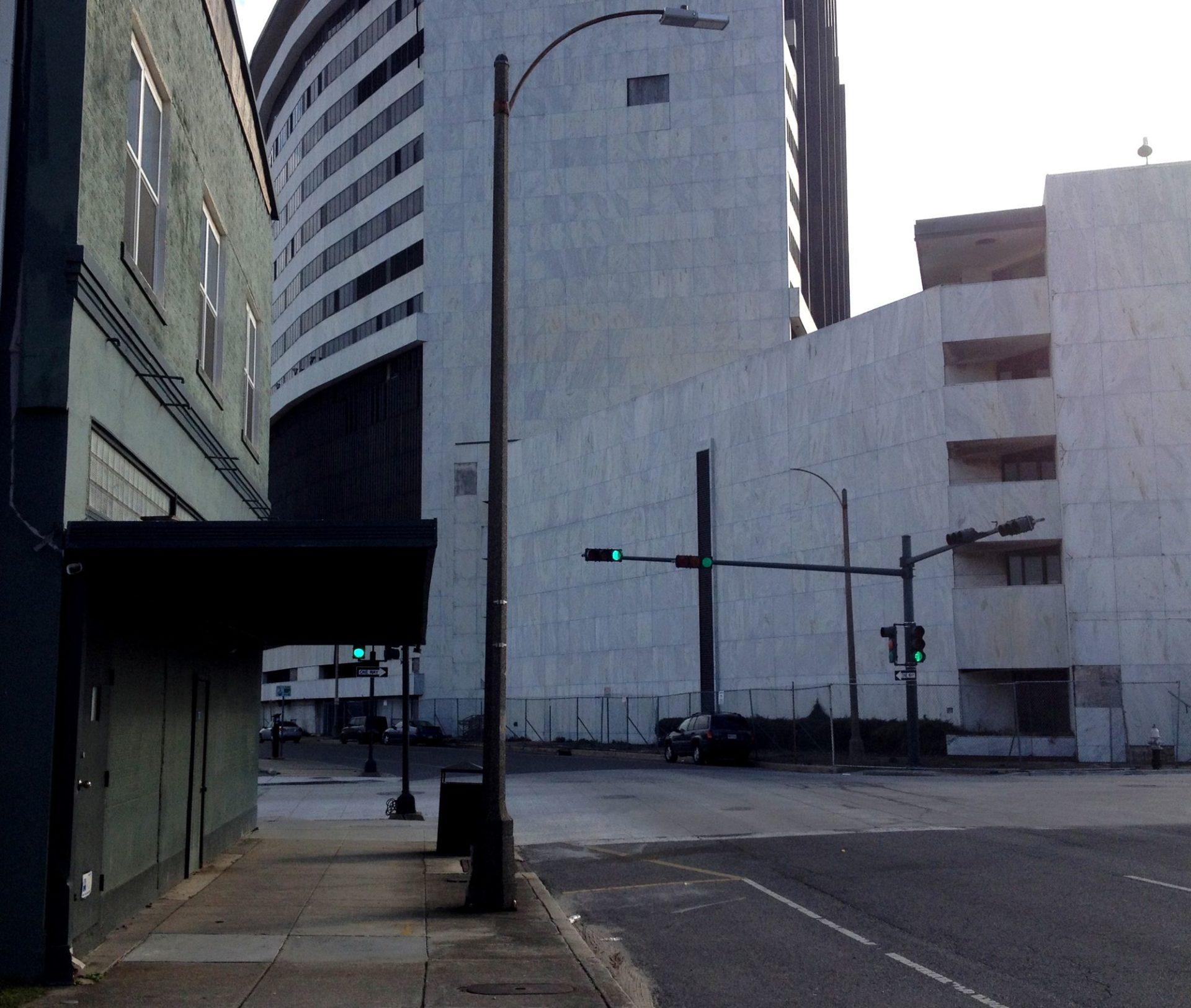 The state’s third tallest building, this egregiously unkempt structure has been closed since 2002 due to asbestos and toxic mold contamination. The Plaza Tower was built between 1964-69 by Leonard R Spangenberg, Jr. and Associates to house offices and residences along Loyola Avenue as part of an office tower district that was never completed. The tower, purchased for $650,000 at a private auction several years ago – down from its original $15.5 million listing – pierces the city’s skyline with it’s distinctive “mushroom top.” Current redevelopment plans include environmental remediation and leasing the 193-space parking structure at the building’s base for sporting events and area parking.

Antonio Pacheco
Antonio Pacheco is a native of the San Fernando Valley currently completing an M.Arch and Master of Preservation Studies at Tulane University; he is one-half of a research, design, and publishing collective known as Supertext.