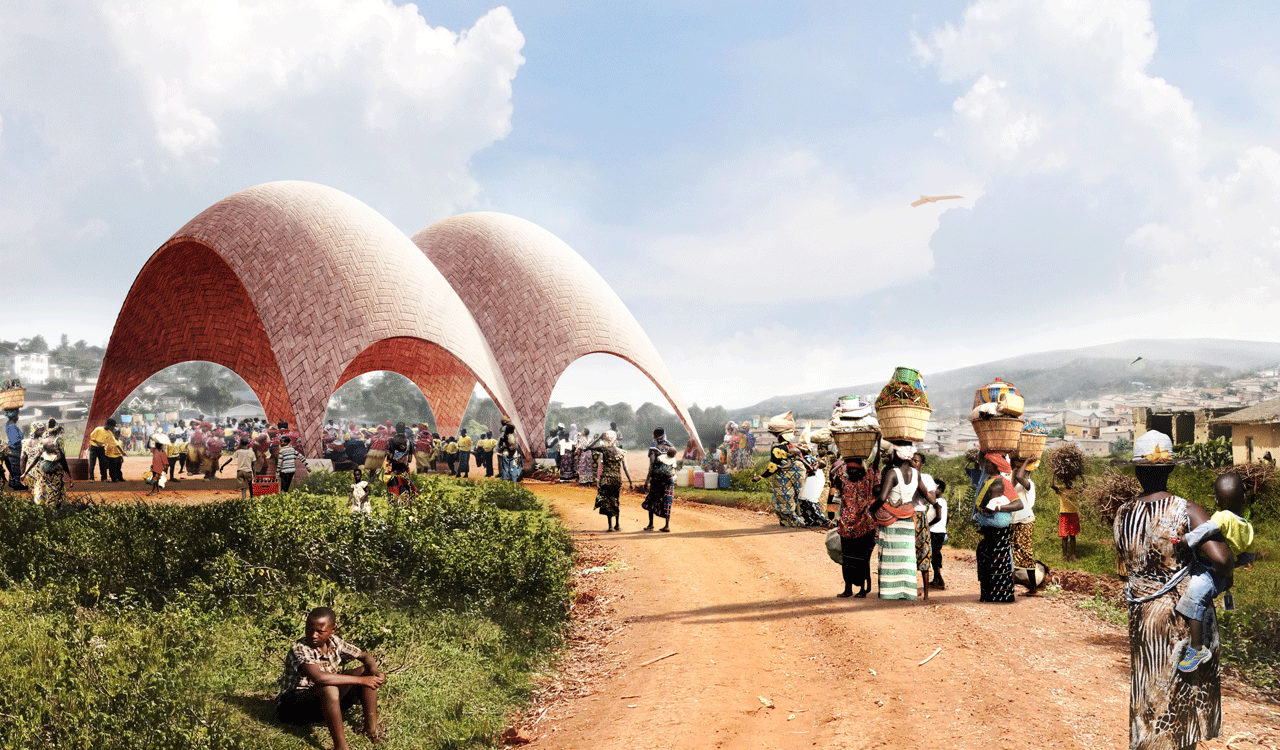 Looking at the starchitect's new droneport project, not from the perspective of the Venice Biennale, but from Rwanda’s politically ambiguous and intricate landscapes.

At this year’s Venice Architecture Biennale, entitled ‘Reporting from the Front’, that focused in parts on ‘humanitarian architecture’, Sir Norman Foster presented his ‘droneport’ for Rwanda. Speaking about the project, Fosters eluded that the droneport emerged from the practice’s canon of airport architecture, but should be seen a piece of ‘social infrastructure’ rather than a building. This will be the world’s first droneport with Foster’s architectural design complimenting the work of think-tank Redline Afrotech-EPFL, focusing on the application of advanced technologies in and across Africa. The droneport intends to service difficult to reach hospitals with medical supplies across inaccessible and rural parts of Rwanda. The US drone company Zipline has already set up operations within Rwanda working alongside the Ministry of Health.

Foster’s droneport is a simple array of structural arches that are formed out of compressed earth-cement ‘Durabric’ tiles. These tiles prioritise local soil over cement and reduce construction costs, while other materials imported into Rwanda have a considerably higher transportation and carbon footprint. In fact Foster suggests that the droneports can cost less than the construction of a petrol station. Stability is given to the tiles through the hand-machine presses, omitting the need for stability from the wood-firing processes that contribute to deforestation.

The droneport follows a number of western-based architectural practices who have recently designed and completed buildings in Rwanda. Their interventions, often branded as ‘social architecture’, have contributed significantly to the positive narratives surrounding Rwanda’s post-war physical and social reconstruction. ‘Development’ is in Rwanda an all-embracing process captured by the government’s integrated development plan called ‘Vision 2020 Umurenge Programme’. National unity and a desire for a globalised economy are at the root of much of the intentions behind President Paul Kagame’s vision. It intends to reduce poverty through rural growth and social protection and it is the logical antecedent to the 1994 Genocide. Yet it is not entirely clear how democratic this vision is and who will benefit from it. It has been argued that fear, suspicion and distrust are internally rife within the post-Genocide political system, although they rarely play out in the public sphere. International human rights groups claim this fear is capitalized upon as a regime to maintain administrative control towards political goals within the development vision.

Rwanda is the smallest and the most densely populated country in sub-Saharan Africa, with land shortages limiting food supply and economic growth. Collective claims to territory are inseparable from the history of conflict across the Great Lakes region, from pre-colonial times to the entrenchment of ethnic territories under Belgian colonial rule. The vestiges of these territories are indistinct yet remain embedded within Rwandan society and as such politically inform and influence all post-war redevelopment.

This #droneport, exhibited at 15th #InternationalArchitectureBiennale, is designed by #starchitect, #SirNormanFoster, and will help transport goods in developing countries. #artkabinett

President Kagame’s ‘vision’ draws from the redevelopment template for Singapore, hoping to economically transform a predominantly low-income agricultural base into a middle-income knowledge based society. The growing capital city of Kigali has been remodelled with a new inner-city dense core with financial facilities giving a rather generic CBD quality to what was small provincial town sprawling over hills and valleys. Rwanda’s countryside of scattered settlements and rich, yet limited, natural resources have been collectivized, reorganized and intensified through various economic development policies.

Kagame’s transition from a country that was decimated from war to the vision, and the rapid ease within which modernisation unfolds have made Rwanda the paragon of African development. Responding to the visual immediacy of clean streets and social welfare reform, Rwanda is continually likened to Switzerland, ironically the country where the EPFL drone project itself originates. Yet within Rwanda inconsistencies between the discourse of development and realities of the everyday continue to surface, making the vision appear as a desperately held together simulation.

Such contradictions are most visually disparate between how the urban poor in Kigali live and the new mono-functional building developments. Several high-rises do indeed stand, yet they are often surrounded by empty land parcels that urban farmers have reclaimed, albeit temporarily. Many informal practices of farming and trading within the city do not project the ‘right’ trajectory of development and are forbidden. In 2015 Human Rights Watch discovered the ‘unlawful’ detention of homeless, street-children, sex-workers and informal vendors that were systematically rounded up by the Rwandan police and held in what the government refers to as a ‘transit centre’.

This year President Kagame amended the local constitution extending his second term to a third, and potentially up until 2034. A few years back, the Rwandan government passed a law allowing it to monitor and intercept email and other communication. Since then several journalists and musicians have been jailed based on the content of private conversations (over skype and whatsapp), that were intercepted and construed as collusion against the government. Such accusations against the Rwandan government sit alongside a host of reports, from within the country and beyond, of assassinations, disappearances and incarceration of the political opposition. Open criticism of government politics itself is taboo within Rwanda. Rwanda under Kagame has been refered to as ‘an Orwellian regime’, where criticism of the government is contained through the government’s reign over open speech and debate.

A complex network of surveillance and communicative control has long operated in Rwanda through a system of broadcasted bureaucracy passing through a hierarchy of socially administered units. During the pre-colonial days of Rwandan kingdoms, the hill was regarded as the basis for socio-political unit, under command of a hill chief. Today the village is the smallest administrative unit in Rwanda, of which an estimated number of 14,876 exist. At the same time, an undeclared smaller unit of 10 households overseen by non-salaried yet official representatives unofficially operates as well. The administrative atomisation of social space permits the government a panoptical view of all events, across scales of the province to the private space of households with the ability to spread a form of despotism that disempowers. It does ensure however that policies related to the ‘Vision 2020 Umurenge’ are effectively implemented.

This article doesn’t seek to criticise Foster’s project directly, as it does responds to many physical and social challenges that Rwanda presents architecturally. The vaults depicted in the rendered images seem to forge a visual identity with Rwanda’s physical geography and the project includes the possible social advantages of drones, not least of all increased access to healthcare. Foster’s droneport is also one of a number of drone projects planned within Rwanda. Nor is the role of drone technology itself being dismissed. Reservations about drone technology are clear, reified recently by Forensic Architecture’s devastating simulation of a Syrian drone strike on a living room, also exhibited at the Venice Biennale.

What is more needed in the developing states? #Architecture or #infrastructure? One of my favourite exhibits at #biennale. #droneport #normanfoster

Rather, this is about the muddy spaces of humanitarian architecture that are paradigmatically prone to being heavily narrated and represented, excised out of socio-political contexts. The resultant effect is a universally positive and distorted view of spaces of development as neutral. Humanitarian architecture emerges from the same dichotomy development faces: a philanthropic base of empowerment and emancipation and at the same time a disembodied process of intervention and imposition. Development is directly rooted in colonial history, which still informs the manner in which the ‘West’ perceives and relates to ‘Africa’. Cultural distance is built into the processes of intervention and therefore into how context is evaluated, responded to, reflected and re-represented. The origin of the drone-project as described by Foster at the Biennale, emerged from ‘a concept of the continent’ of suffering from a lacking of infrastructure, a high population growth and with ‘little hope of catching up’.

Where architecture disengages from the political there is a reduced context and this is an on-going crisis in architectural practice. Architecture rarely can bite the hand that feeds it. Kim Dovey calls this contradiction ‘the silent complicity of architecture’, where real control of the programme is ‘ceded to the commission of the client’. Yet the humanitarian spaces of intervention are fraught with more power struggles, with interests displaced across many ‘stakeholders’ and ‘beneficiaries’, often less invisible than visible, more remote than proximate.

Droneports are planned for three locations to give coverage to 44% of Rwanda. One of these locations is the Rwanda-DRC border town of Cyangugu, in an area where human life is enmeshed between rebel fighting and the illegal trafficking of high-grade mineral resources, much of which passes through Cyangugu itself. In neighbouring Kenya test drone-flights projected by Redline were postponed in 2014 due to local government fears following recent terrorists attacks.

The Rwandan genocide creates a prevailing narrative of hope that indeed captures a universal notion of human desire to overcome the legacy of human conflict. This narrative is inseparable from the modernising aspirations of development, creating the grounds in which most, if not all, humanitarian or social architecture emerges in the Global south. Rwanda’s transformation captures the contradictions of development, in particular the Janus-faced paradox of modernity that structurally underpins it. Architects working in ‘development’ should not give up on the Biennale’s suggestion that beauty and craft is pitted against the challenges humanity throws at us. But to do so we have to come to terms with the profound contradictions that exist within the political contexts such architecture invariably finds itself tangled up with.

What is most seductive about Foster’s project is how narratively architecture is coupled with the positive use of drone-technology towards human goals. Yet when the drone-port is resituated within the political context of Rwanda’s atomising and opaque system of governance, the use of this specific technology, and therefore the architectures grounded claims of good intentions become unstable.

Architecture, like any form of reportage and representation, when excised from its socio-political context, reflects back the ideal scenario into which we gaze. Despite best intentions such decontextualized representations simply depoliticize and dehumanize otherwise much more complex subjects and life-conditions. In Rwanda such complexities are already screened from our view, and ‘the social’ in humanitarian architectural practices, if it does anything at all, needs to bring these back into view.

Killian Doherty
Killian Doherty is a qualified architect from Northern Ireland. His research interests lie within the exploration of fragmented sites, settlements and cities at specific thresholds of racial, ethnic or religious conflict and he runs a collaborative practice called 'Architectural Field Office'.