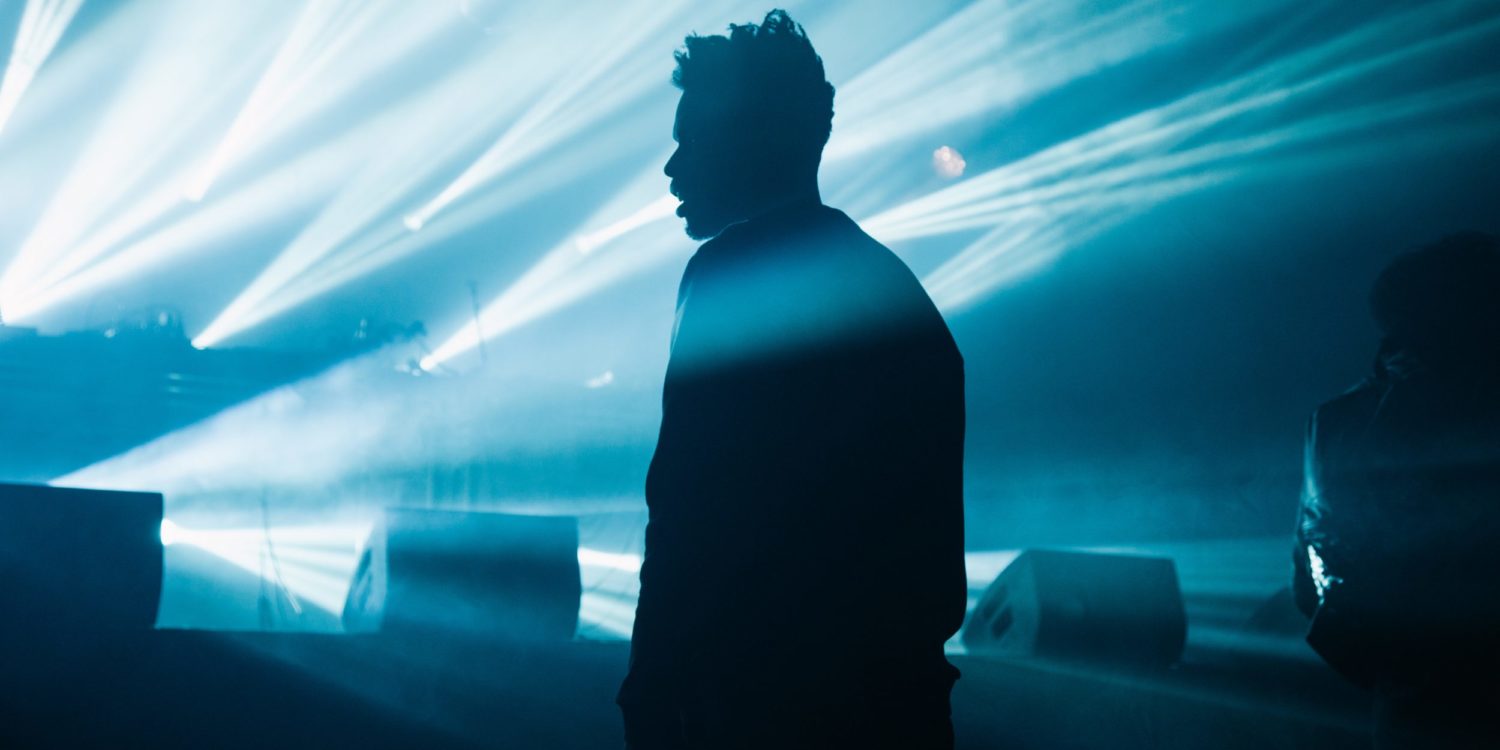 We spoke to musician and visual artist Gaika about the ownership of clubbing spaces, 'sambo shows', and the spatial dynamics of London's built environment.

There are few artists more attuned to the contemporary urban experience than London-born producer, vocalist, visual artist, and filmmaker, Gaika. Hailing from the London borough of Brixton, it’s in some ways hard to imagine his music coming from anywhere else: moving seamlessly between dancehall, trip-hop, grime, reggae and many of the other sounds that make South London such a captivating mix of cultures and experiences.

Since emerging as a solo artist in late 2015, he has produced a steady stream of tracks on themes such as race, class, dystopia, and the experience of living in a city like London, characterised, as it is, by creeping gentrification of multicultural neighbourhoods and a security apparatus that is often perceived as actively hostile to young people of colour. Accompanied by arresting live performances and a remarkable output of video art, he is an utterly vital presence in the current cultural scene.

Taking advantage of his presence in Amsterdam—where he was showcasing his “Spectacular Empire” project at Amsterdam’s Progress Bar—Failed Architecture’s Charlie Clemoes sat down with him to talk about the ownership of clubbing spaces, grime, and the spatial dynamics of London’s built environment

Charlie: I thought we could start talking about this series of tweets you posted last year, in reference to an incident at a Princess Nokia show… In your comments you referred to so-called “sambo shows”, and speculated that the underlying issue was about “crypto-conservative artistic infrastructure”, could you expand on that?

Gaika: I think Princess Nokia is an artist who is, in a lot of ways revolutionary. When you are an artist like that, there’s an effort, either consciously or unconsciously to dampen the fire, that you clearly have the potential to create. And I think part of that process is making the artist face a situation where they are depowered, or their power is directly challenged, in a way that leaves them feeling utterly torn apart.

i call them shows sambo shows. super fucking disrespectful privileged audience who give absolutely 0 fucks about anything

and then they get drunk and violate

C: Is this something you’ve experienced yourself?

G: Yeah, I get booked for shows [like this]… I once got booked for a show, the promoter didn’t tell me that it was meant to be an ambient, lie down, go to sleep, listen to music, go to sleep in a museum [type of thing], this promoter, his attitude was like, “I wanna shock the crowd”. And he didn’t tell me that his whole thing was gonna be to bait and switch the crowd. So I go out to this room of 400 people and they’re lying on the floor. I know what I’m about to do, it’s not ambient music. It’s not chill music you wanna lie down and go to sleep to. At no point did he tell me. So I’m like the wild African. It’s in a museum of African and Oriental art in Paris, and so it’s like, wait a minute, what is this? And they had all these cameras, filming me as this was going on. And I was just like, what are you trying to do? Is this myopic or is this deliberate? This is about trying to diminish what my power is, or force me to be disheartened.

C: So do you think this is resolved by addressing the question of ownership?

G: 100%. The other day, I played a show with Princess Nokia, in Liverpool, UK. After her show, I’m sat backstage and my friend starts texting me saying “you’ve got to come downstairs…” I go downstairs, walk into the main room of this club, and… there are… maybe 15 white people, in various states of undress, with prosthetic appendages, shall I say, blacked up in tribal paint, dancing around on the stage, talking about “ooga, booga, mama Africa” dancing around a fire, shaking sticks… On this bill, before, had been me, Princess Nokia, and Moor Mother. What in the name of god, whoever booked that thought it was gonna fly? Obviously the crowd reacted, and it turned into mayhem. And these guys got booed offstage. The guy was standing there and he was arguing. He said, “I just wanna finish my set,” He got under my skin, and so I said, “look, what are you doing, you can’t do this…” And essentially, it turns out, he’s some friend of the owner of the place, and they knew there was gonna be a lot of people there, so they wanted to do their thing. It was one of the most offensive things I’ve ever seen. This was a month ago. Would that have happened, if there was more diversity in terms of upper management of the art space? That is one of the most offensively racist things I’ve ever seen in my entire life, and it happened in 2017 in Liverpool, which has a history of racial tension. And it happens because the people who make the decisions have a real distance from black community. Everyone’s all free-spirited and claims to be a liberal. This guy turned round, the main culprit, and said “I consider myself a woke person.” That’s what he said to my face. And I’m like “look, you don’t understand, the NF (National Front), or EDL (English Defence League) guy, you know what he stands for, and he’s not gonna violate in that way. That’s literally the most racist thing I’ve ever seen.” And he said to me “but I’m woke though”. As long as you say it, it’s ok.

C: So I suppose that the idea that you’re suggesting is that these spaces need to be fully owned? Or just that you need to have control over these spaces?

G: Yeah, just ownership, and more control. I’m a realist, I don’t deal in absolutes like that, but I think all too often, artists are the players in the house, they have no real power in the house, other than their ability to sell tickets, which is nebulous.

G: Yeah, totally precarious. And also, it doesn’t create compelling works. Music, in particular, is traditionally the play thing of the powerful, also the music business [now]. In this environment, the music maker, or the culture maker is secondary to other concerns.

i have been generally thinking alot about ownership of artistic infrastructure and how we communicate. time fi make some moves

need to get far away from the crypto conservatives that populate and dominate the liberal arts world. they give no fucks about us

instead we can just put on stuff ourselves, where black and borwn people don't feel uncomfortable and the soundsystem isn't a pile of shit

riders get filled and money get paid promptly and fairly. ie NO-ONE violates

C: I wanted to talk about grime a bit, since it’s had a massive resurgence in London over the past few years, and spatially there’s something about the way it’s produced that suggests lack of space, lack of time, lack of opportunity to enjoy public space…

G: It’s the sound of the urban environment isn’t it? I think grime sounds like lifts. It sounds like housing estates. Brutalist architecture matches the sound. Yeah it’s the sound of trains going past, lift shafts, metal grinding on things. It’s got that cinematic quality that comes from living in often quite spectacular spaces. Tonally, there’s a paranoia and a nihilism which comes with those buildings.

C: How do you think it relates to the spatial limitations exacted upon young people, especially young people of colour in urban areas…?

G: I think it’s all young people in those areas… There’s limitations on people full stop, that poverty creates. Yeah, it’s also a technical limit, if you don’t have cash for equipment, then you make stuff that you don’t need equipment for, it’s got lot of space in it, because you’ve only got so many instruments.

G: The London Riots affected what I’m working on now because, the problems of deprivation in inner city London, have not been tackled, and there’s been an escalation in terms of antagonism between people in these deprived portions of our society and the rest. I think the London Riots was one of the first inklings of the discontent that has led us to where we are today. We’re about to leave the European Union, we’ve got rising crime and unemployment. Political instability.

C: One last question, I’d generally be interested to know what you think of London, the music scene there, and particularly how it relates to cost of living, cost of transport, being able to actually experience nightlife in London, are you optimistic about the situation?

G: I think London music is very much driven by this huge socio-economic thing. In general, I don’t think you separate art from its context. So, I think it’s pretty obvious, a lot of music in London is music for the purpose of profit. Because people can’t live without making money, a lot of it. So everything they do is geared towards that. A lot of music in London is made very cheaply, because there isn’t the infrastructure to make it not cheaply. And that’s not available to a lot of people, so I think it’s hugely connected. And, yeah I am optimistic, the cost of making music is coming down. I’m optimistic in general because I think the way art is consumed in the world is changing.

Listen to GAIKA talking to Failed Architecture about the transformation of London in episode #05 of our podcast: London Undone: Gaika and Ash Sarkar Discuss the City’s Past, Present and Future.

#05 London Undone: Gaika and Ash Sarkar Discuss the City’s Past, Present and Future