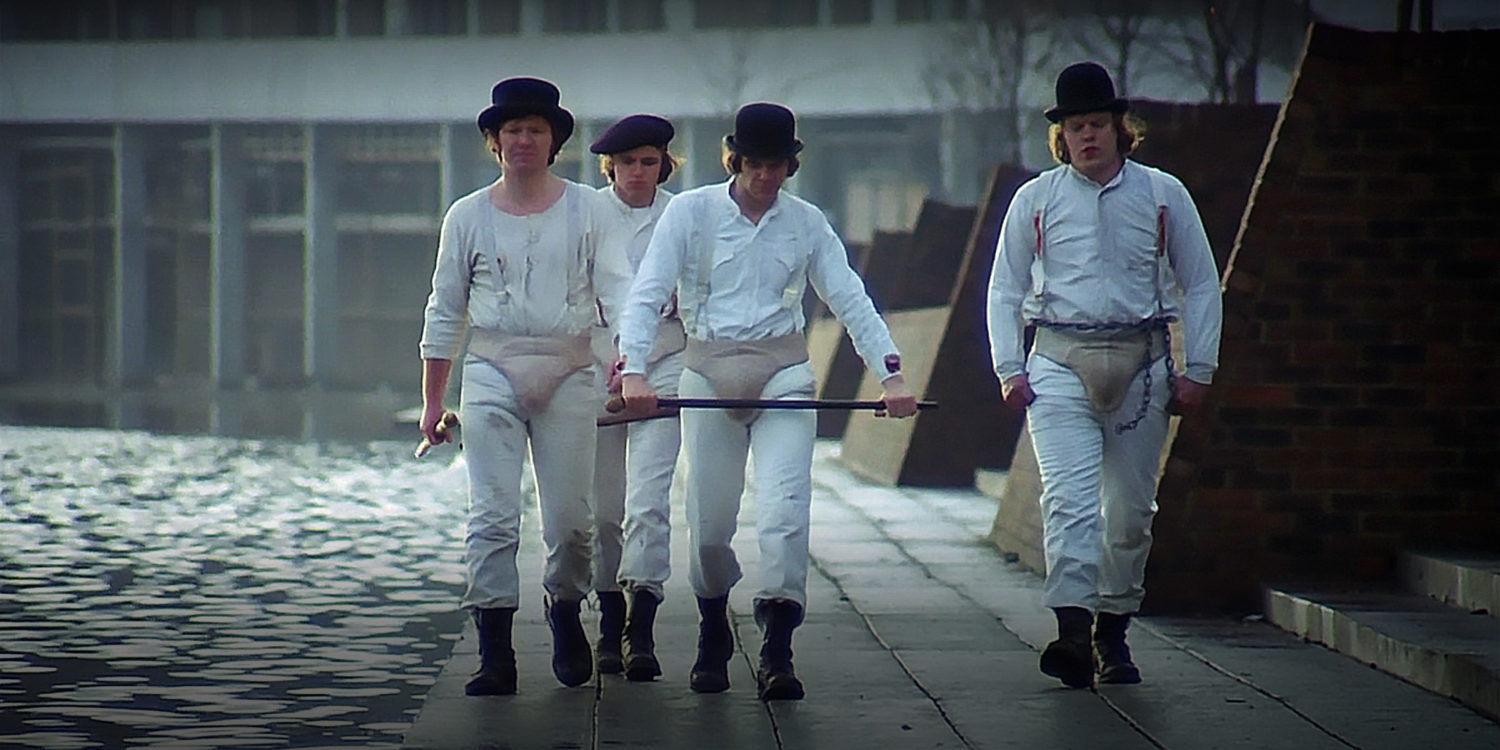 Following its depiction in Kubrick’s classic 1971 film A Clockwork Orange, the image of Thamesmead in the media has become progressively detached from the real conditions prevailing on the estate.

In one of the most famous scenes from Stanley Kubrick’s 1971 film A Clockwork Orange, the main character Alex and his gang of Droogs walk in menacing slow motion along the concrete banks of a modern estate. As the overture to Gioachino Rossini’s The Thieving Magpie plays, we hear Alex’s voiceover: “as we walked along the flatblock marina, I was calm on the outside but thinking all the time.” Suddenly the pace changes, and despite remaining in slow motion, Alex hits one of his companions with his walking stick and kicks him in the water of the lake. The violence continues as he beats up the rest of his gang. This is one of the two scenes of the movie that were filmed at the Thamesmead estate, in Southeast London.

Rarely has a film affected the public’s opinion of a building as much as A Clockwork Orange has affected that of the Thamesmead estate, and potentially British modernist housing in general. Ever since the estate’s depiction on screen, its ultraviolent reputation has been exploited to suit the ends of those who have no interest in keeping it as social housing:  first, as a justification for the reactionary attack on post-war social housing; and now as a way to package the place as a part of the area’s edgy history in order to sell it off as private housing. 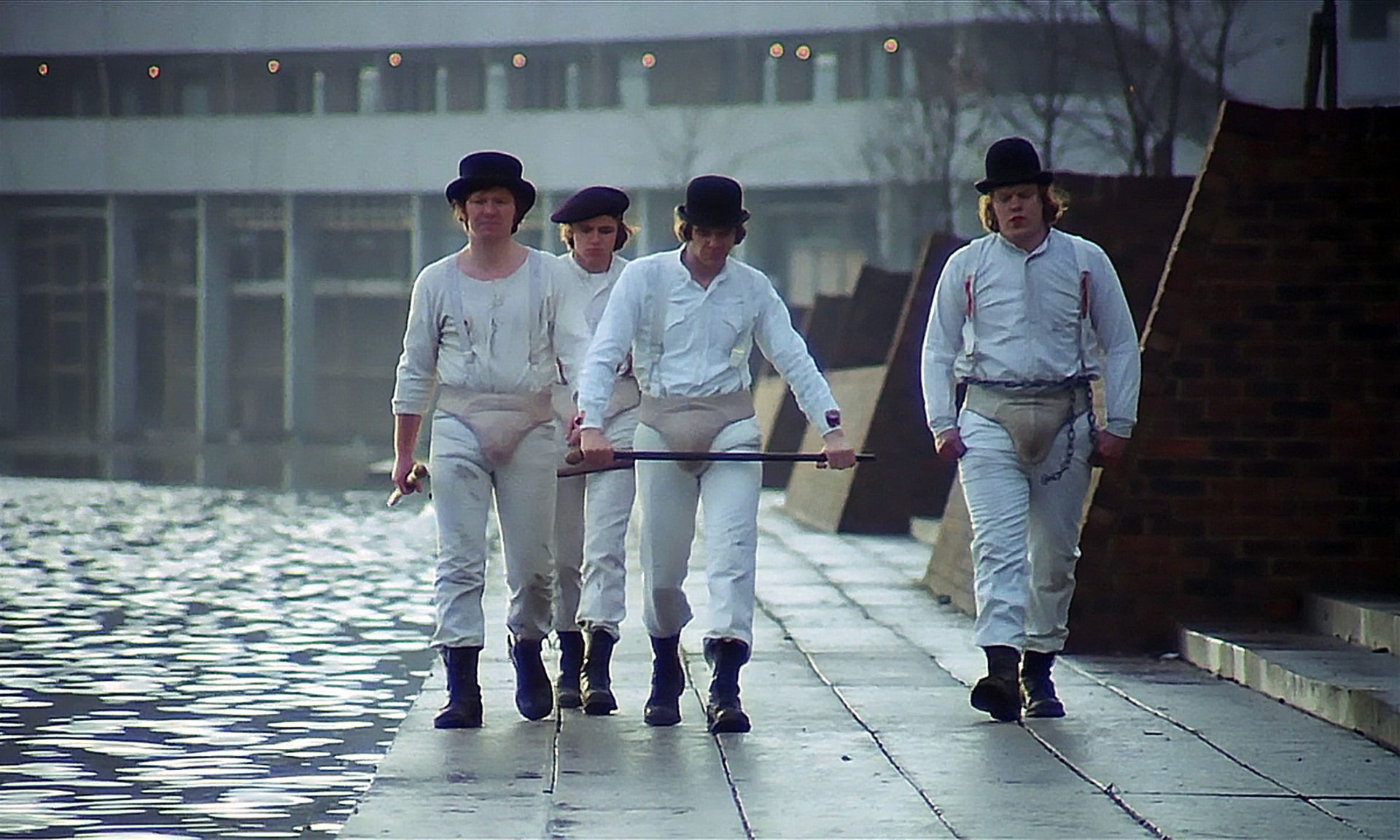 At the time of the film’s release, public opinion shifted from a sense of post-war utopian optimism to the full-blown conviction that the ideas of modernist architecture had resulted in nothing but failure. In Militant Modernism, writer Owen Hatherley describes how, at that moment, Thamesmead, and by extension brutalism, became associated with the “physical brutality” of the fictional Droogs’ nihilistic crime and vandalism. Indeed, in 2006, when plans were proposed for the demolition of the estate, the headline in a newspaper read exuberantly: “No More Clockwork Orange!”

However, recently the estate has entered a new phase: if the connection with A Clockwork Orange might have once kept people from living there, it now seems the housing association has found a way to use it for commercial purposes. An analysis of these different phases shows how the media image of the Thamesmead has been used over the years to suggest and support contrasting views of the estate – all of them unrelated to the interests of its inhabitants.

From utopia to urban monstrosity
The situation was very different in the period just after the estate’s construction. Thamesmead was named “Town of the 21st Century” and hailed as a true utopia of affordable housing, with plenty of green spaces and artificial lakes, and hopes for providing a permanent solution to London’s post-war housing shortage.

Building started in the 1960s. The construction replaced the polluted bogs of the Erith and Plumstead Marshes that had previously only been used for ammunitions testing and storage.

Three years after A Clockwork Orange, the Greater London Council released Living at Thamesmead, a 25-minute promotional film for Thamesmead that shows the estate in a completely different light. The sun shines while children play on the concrete platforms and people of various colours and creeds go about their day. A young woman meets her friend on the steps next to Southmere Lake. A cheerful tune plays as they start walking along the lakeside, at exactly the same spot where Alex violently beat up his Droogs. The film actively combats the stereotypes that were created by Kubrick’s film by showing an upbeat image of the estate, where children and young people are offered new chances by being provided with housing, jobs and plenty of other occupations.

Journalist Lynsey Hanley has a different opinion of Thamesmead. In her book Estates she describes the problem with social housing and crime in Britain (albeit in a very personal account, having grown up on an estate herself). She sees the supposedly inhuman living conditions of Thamesmead as “anonymous, empty expanses of concrete ringed by walkways and made labyrinthine by subways.” In reality, Hanley’s book shows a clear bias against modernist architecture. It goes so far as to use Thamesmead to describe how concrete has a “coldness” that seeps “into the bones”. With a thoroughly British aesthetic conservatism, she claims that a home requires a sense of warmth “associated with brick”, reaffirming how concrete is inherently linked with “monstrosity.” She states how Thamesmead in A Clockwork Orange was “brand-new, but already looked sufficiently dystopic,” supporting the claim that it was a clairvoyant choice of Kubrick to use it as a setting for a dystopian story. 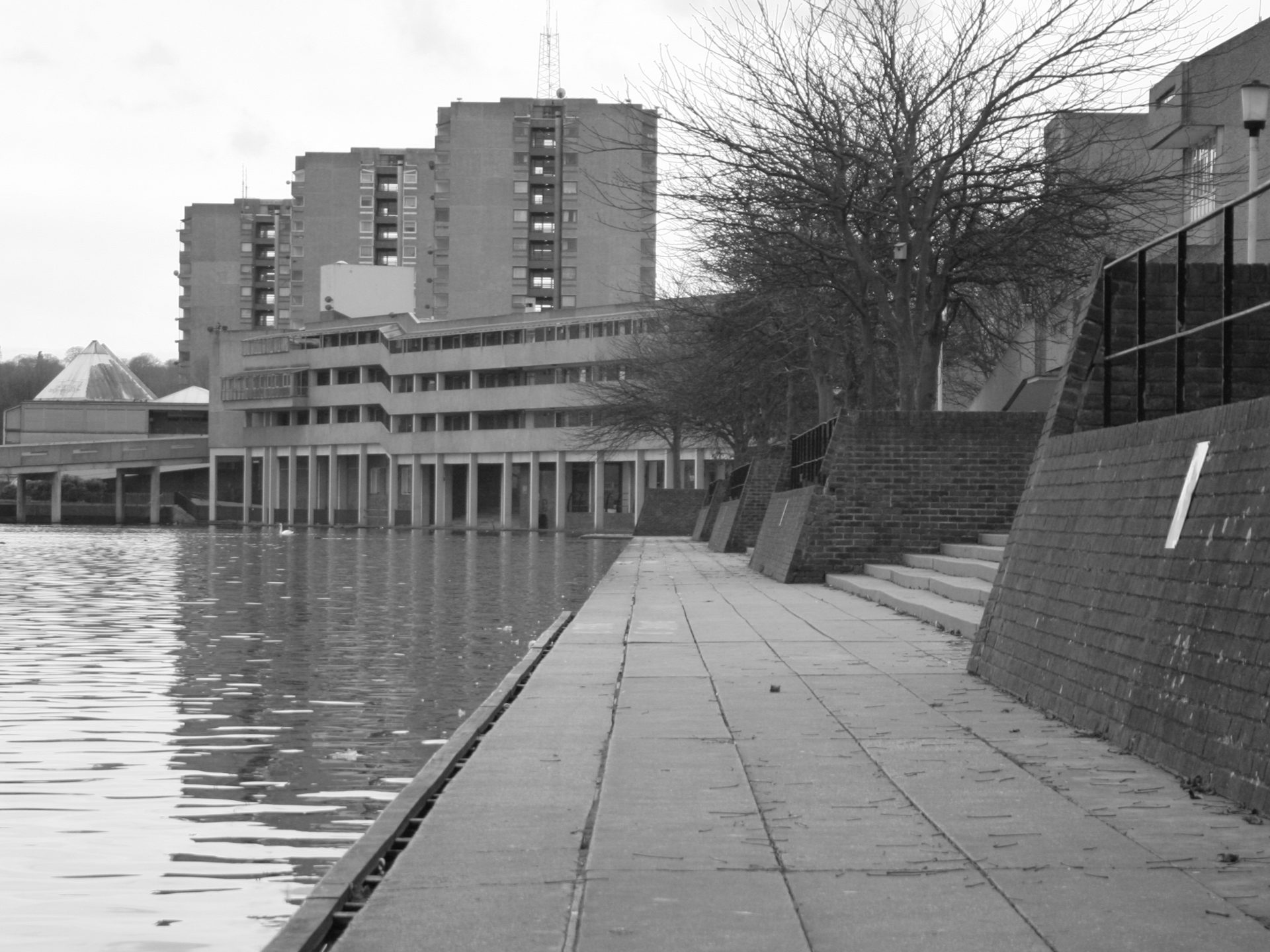 In fact, from reports about Kubrick’s decision for using Thamesmead, all that can be concluded is that he wanted an area that looked futuristic, and Thamesmead just happened to be the most forward-looking construction at the time. Similar to the empty spaceship corridors of 2001: A Space Odyssey (1968), the film he made a few years before, he was looking for the alienation of a supremely modern space, not one that was horrific in itself.

It cannot be denied that there were real problems with the estate: it was too isolated, there were hardly any transport links and, like many estates in Britain, it was poorly maintained. However, the demolition of post-war estates, such as Thamesmead, can hardly be considered a solution to Britain’s continuing housing shortage and ever increasing house prices.

Ultraviolence: reason for demolition or commercial advantage?
There might be a different reason for linking social housing with failure. In his book Remaking London, urbanist and architectural historian Ben Campkin describes how the so-called failure of post-war council housing has become a “justification for the government’s drastic scaling back of public housing provision.” He clarifies that the bias against council housing stems from Britain’s deeply ingrained thoughts regarding class, about the undeserving poor; the view of poverty as a contagious disease; and the stigma about those who have to partake in social provisions like housing. Moreover, the alleged connection between post-war concrete council estates and crime is weak, to say the least.

Campkin traces this commonly assumed link to a popular BBC Horizon documentary from 1974 called The Writing on the Wall in which the outrageous claim was made that “where everything you see is anonymous, dull and concrete, it is not perhaps surprising that inhuman tragedies occur.” In fact, it is much more likely that socio-economic causes lie at the basis of the increase in crime on council estates. Contributing factors could be found in the council’s housing policies, economic and educational disadvantages of its inhabitants, cuts in building materials and upkeep of building, and finally the role of the media in influencing an estate’s reputation.

Danger can also become a brand. In his book, Campkin describes the popular trope of the “dystopian urban wasteland”, which is a deprived urban area that is exported in commodified forms for the more affluent. This often takes the form of a film, advertisement or music video.

Thamesmead, of course, is a great example of this. Peabody, London’s oldest housing association and current owner of the estate, has a website proudly dedicated to the screen presence of Thamesmead. It shows how the estate has continuously been portrayed as a site of youth crime and urban violence. Examples range from Aphex Twin’s music video Come to Daddy and Channel 4 show Misfits to the 2016 ad by upmarket department store Selfridges The Bard of the Street, in which references to Shakespeare are made in clear relation to the disenchanted youth of West Side Story. However, Peabody’s pride in announcing all these appearances on film and TV also shows that a new reputation is being created for the estate, beginning with its ultraviolent seventies film setting. The estate is portrayed as a provocative but no longer dangerous place to live: a concrete, mid-century modern playground for the super-cool elite.

The future of the Thamesmead estate
Instead of the ever-present threat of demolition affecting most post-war council estates in London, Thamesmead might be in store for a different fate. Peabody is investing £1.5 billion in a massive regeneration project at the site, and this has emerged alongside a recent announcement that Crossrail will serve Abbey Wood Station as of 2018, directly connecting the estate to the city. In their statement, Peabody has revealed how their project is still haunted by Kubrick’s film. As Pauline Ford, interim executive director of Thamesmead, stated: “The perceptions formed by A Clockwork Orange are just wrong, but we know we need to spend a great deal of money on good design.” 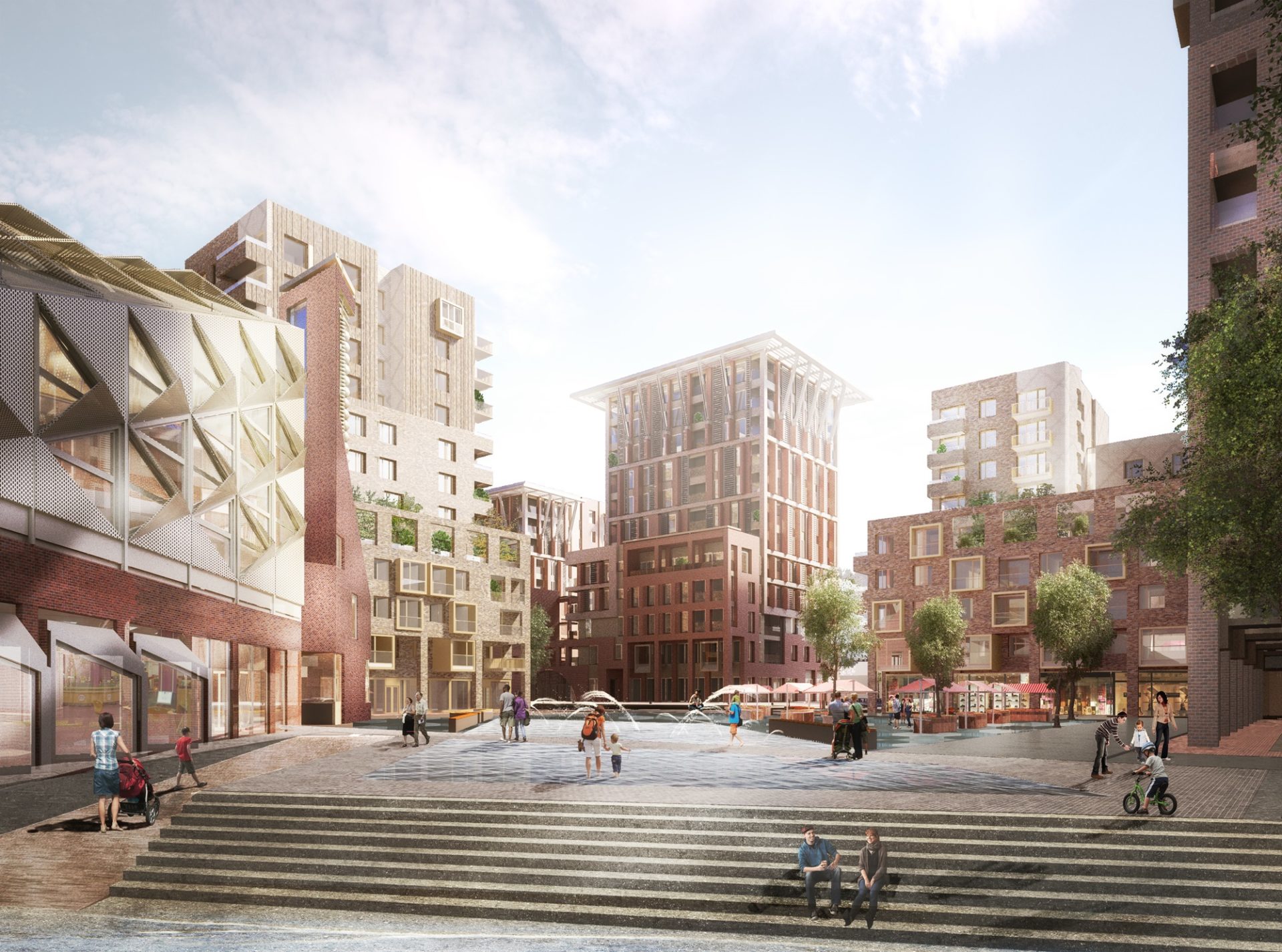 But what will this mean for the estate? Peabody has announced that, of the 1500 new homes that will be built, 45% will be affordable, meaning 80% of market value, which by London’s standards remains very steep. Existing residents, of whom 40% are social tenants, will be allowed to stay in a new home with the same tenures (which also means that no new social housing will be added to the stock). As Peabody’s most expensive project to date, it is unlikely that this pricey development will actually help London’s social housing crisis. Instead, by allowing the council estate to become gentrified and gradually taken over by private buyers, attracted to the edgy estate that’s only an 11-minute ride to the corporate offices of Canary Wharf, it is likely to do the very opposite.

Inez de Coo
Inez de Coo is a video artist and writer from Amsterdam, The Netherlands.