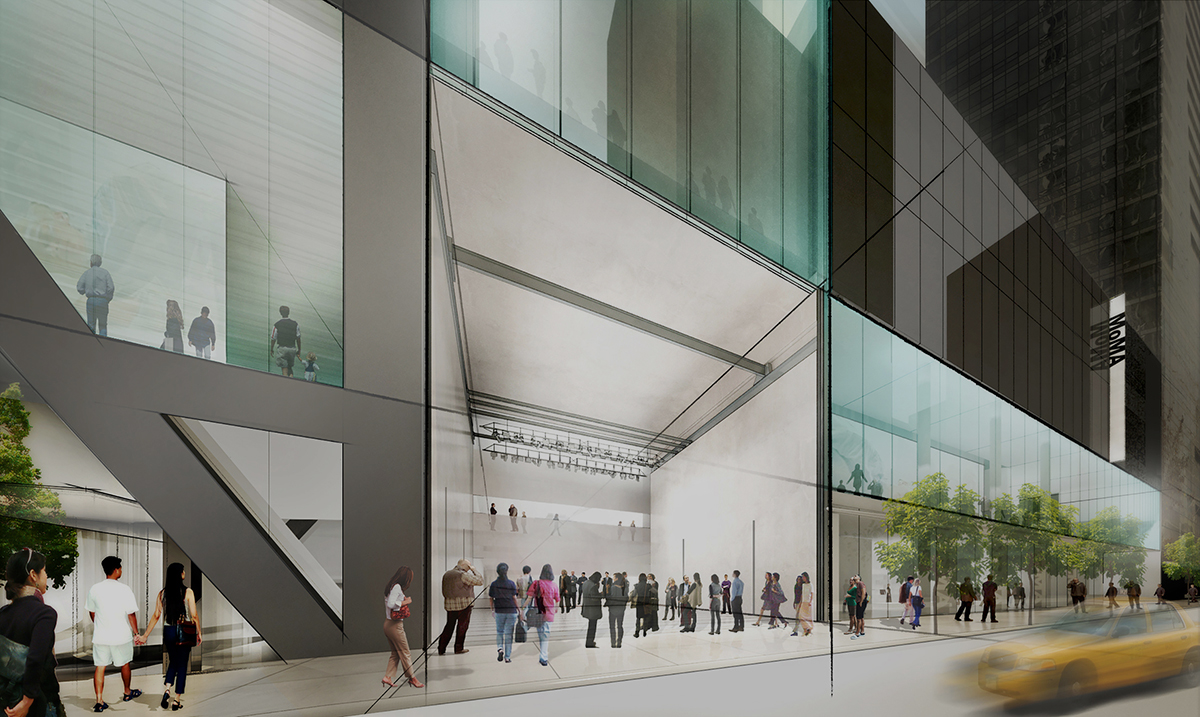 The response to the Museum of Modern Art's expansion plans has been devastating. Almost everyone seems to hate the design by Diller Scofido + Renfro and the museum's decision to demolish an existing building. But the case proves as much MoMA's totalitarian tendencies as it shows the critics' selfish nostalgia and predictable preoccupations.

The jury has come to an unanimous verdict: the MoMA’s expansion plans are a crime against the arts, architecture and history and are an insult to the moral superiority and good taste of architecture critics. Never before have I read such harsh and undivided criticism concerning a single building. The high priests of architecture criticism are using the gravest words to condemn the MoMA’s plans to tear down the 12-year-old American Folk Art Museum and replace it with a largely glass extension by Diller Scofidio + Renfro. Respected journalists like Michael Kimmelman and Jerry Saltz have spared no word to share their disbelief and disgust. Saltz went as far as to publicly beg the museum’s powerful Board of Trustees to stop and reconsider the plans, arguing that “this isn’t museum architecture; it’s heady stagecraft that trivializes most art and turns looking into nifty convivial public entertainment”.

What has happened to these wise men, why are they so angry? Why is architecture critic Martin Filler blaming the MoMA for a “grow-or-die philosophy based on present-day corporate models”, while knowing that the museum has been founded and funded by corporate wealth and has a long history of speculative expansion. Why does an adult man feel the need to vilify Diller Scofidio + Renfro by stating that they “have undergone a dire transformation from vanguard mavericks to corporate apparatchiks”? Why not give them the benefit of the doubt after admitting that (DS+R’s earlier projects) “the High Line and Lincoln Center have had a really euphoric effect on life in New York.”? 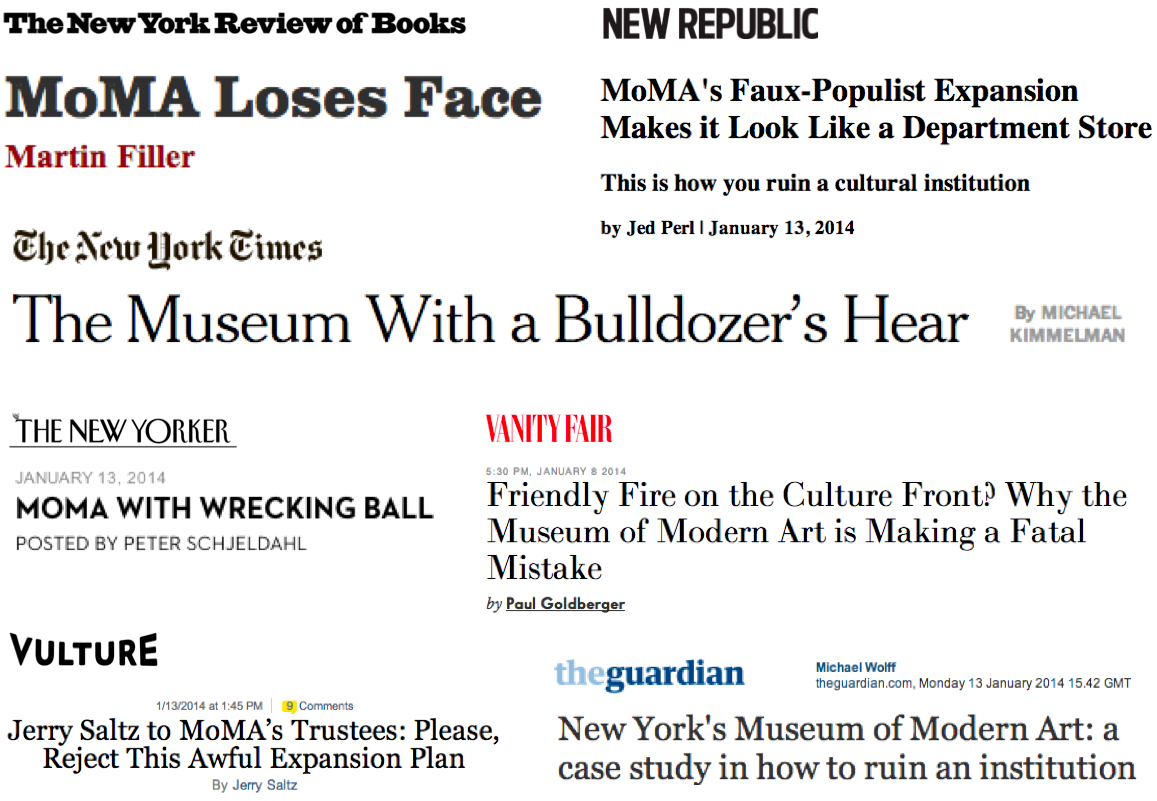 The Verdict: Headlines of a selection of recently published articles that are critical of MoMA’s expansion plans.

One way to explain the deep dismay is the age range of the Members of the Jury. All in their 50′ and 60’s, they have experienced New York in a pristine state, when the MoMA was still housed in the original museum building from the 30’s. Their reminiscences, and the bittersweet nostalgia it evokes, is most powerfully expressed by Michael Wolff when he is lamenting that “there was, when I came to New York in the 1970s, no more profound or moving experience than MoMA, an almost perfect piece of 20th Century modernist expression, existing in an extraordinary balance – modestly, functionally, elegantly – with the extraordinary art it held. (…) It really achieved the Holy Grail of public spaces. (…) Perhaps one of the most satisfying man-made spaces ever.”

To see anyone trespassing his private ‘lieu de mémoire”, is simply unbearable.

The Jurisprudence: Michael Kimmelman’s condemnation of the Stedelijk Museum in Amsterdam (left) and Maxxi in Rome (right) resonates strongly in his critique of the MoMA’s expansion plans.

Another explanation for this deep-seated resentment is the critics’ shared world view in which the expansion of a museum equals corporate greed. When the New York Times sends its architecture critic Michael Kimmelman to review a new museum, his opinion is never hard to predict. In his 2010 article on Maxxi, designed by Zaha Hadid and housing Rome’s national museum for contemporary art, he already proved himself a real prophet of doom: “… the museum, begun in a climate of architectural hype that countenanced impractical, sometimes impossible, spaces in the name of sexy but increasingly clichéd curves, has an air of already bygone taste.” And after visiting the renewed Stedelijk Museum – Amsterdam’s self-proclaimed peer of the MoMA- he called the Benthem Crouwel Architects’ creation a “ridiculous looking building” and the result of “the money-fueled, headline-hungry, erratically ingenious era of indulgent museum design that began to peter out with the global economy.”

Therefore it came as no surprise that he denounced the MoMA’s new plans in his signature style: “flexible spaces to accommodate to-be-named programming, the logic of real estate developers hiding behind the magical thinking of those who claim cultural foresight. It almost never works.” But what if Diller Scofidio + Renfro, whom Kimmelman praised as “gifted architects”, have made their design with future visitor’s in mind?

The Case: MoMA plans to tear down the 12-year-old American Folk Art Museum (left) and replace it with a largely glass extension by Diller Scofidio + Renfro (right).

MoMA and DS+R are promising improvements to the museum’s lobby, the circulation of people, and the opening up of the sculpture garden to the public free during museum hours. Glenn Lowry, MoMA’s director, talks about providing “an even more enlivening and participatory experience, a space for both contemplation and conversation.” But that didn’t convince the critics. Michael Wolff writes that the use of glass, once a virtue of the “20th Century modernist expression”, is “more suited to a corporate headquarters in Los Angeles or Dallas.” And art critic Jed Perl is against opening the sculpture garden to the public, because “it will almost inevitably lose the intimacy and inwardness, the sense of an island in the city.”

Because that is what we need: a museum as an island for art and architecture critics.
In the comments sections of established media and in the blogosphere, the middle-aged male critics receive strong support from more angry people, who share the view that MoMA is acting as a despotic real estate developer with DS+R as its two-faced accomplice. There is a wide-shared consensus that its ‘culture verses commodity’ and ‘idiosyncrasy versus banality’. The ghost of Jane Jacobs is haunting the museum. 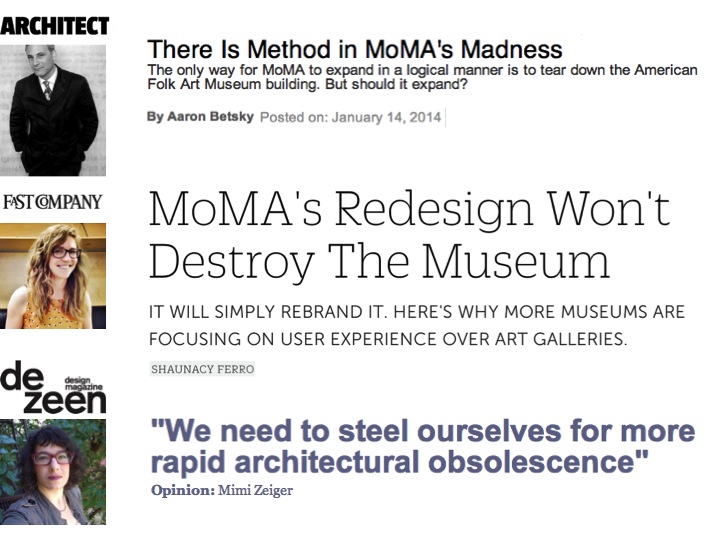 The Defense Attorneys: only a few individuals defend the MoMA, or at least try to approach its plan from another perspective.

The only person to give a more balanced view is Aaron Betsky who writes that “Given the logic of MoMA’s expansion, there is no question that it makes sense to tear down the Folk Art Museum.” Instead of disputing the demolition plans, he gets to the core of the real problem by asking whether we will  benefit from a bigger MoMA? The answer might prove to be crucial to really understanding the issues at stake, because it changes the perspective from ‘architecture pour l’architecture’ to the necessity of yet another expansion. Because everyone who ever visits the museum is complicit in the museum’s unstoppable growth. Is their a way back for a tourist magnet we all helped to create?

Ironically, it takes female (and younger) writers to promote this other, more user-oriented perspective, and counter some of the ideological underpinnings of the critics’ assault. According to Mimi Zeiger, Diller Scofidio + Renfro’s scheme emphasises visibility and publicness. By comparing it to an Apple store, she tries to make the point that Apple’s successful retail formula has inspired MoMA. But I wouldn’t be surprised if Steve Jobs and his devote design evangelicals have paid close attention to MoMA’s minimalist interior and exhibition design. In another article that defends MoMA’s plans, Shaunacy Ferro raises the question if “moving towards a more accessible, expansive vision of a museum experience means destroying the institution?”, quickly giving her own answer by adding “or does it simply mean expanding the museum’s reach beyond art critics?

Who knows? Time will tell, but the High Court will not revise its verdict. Case closed.

Gangs of New York: The Battle for 5 Pointz