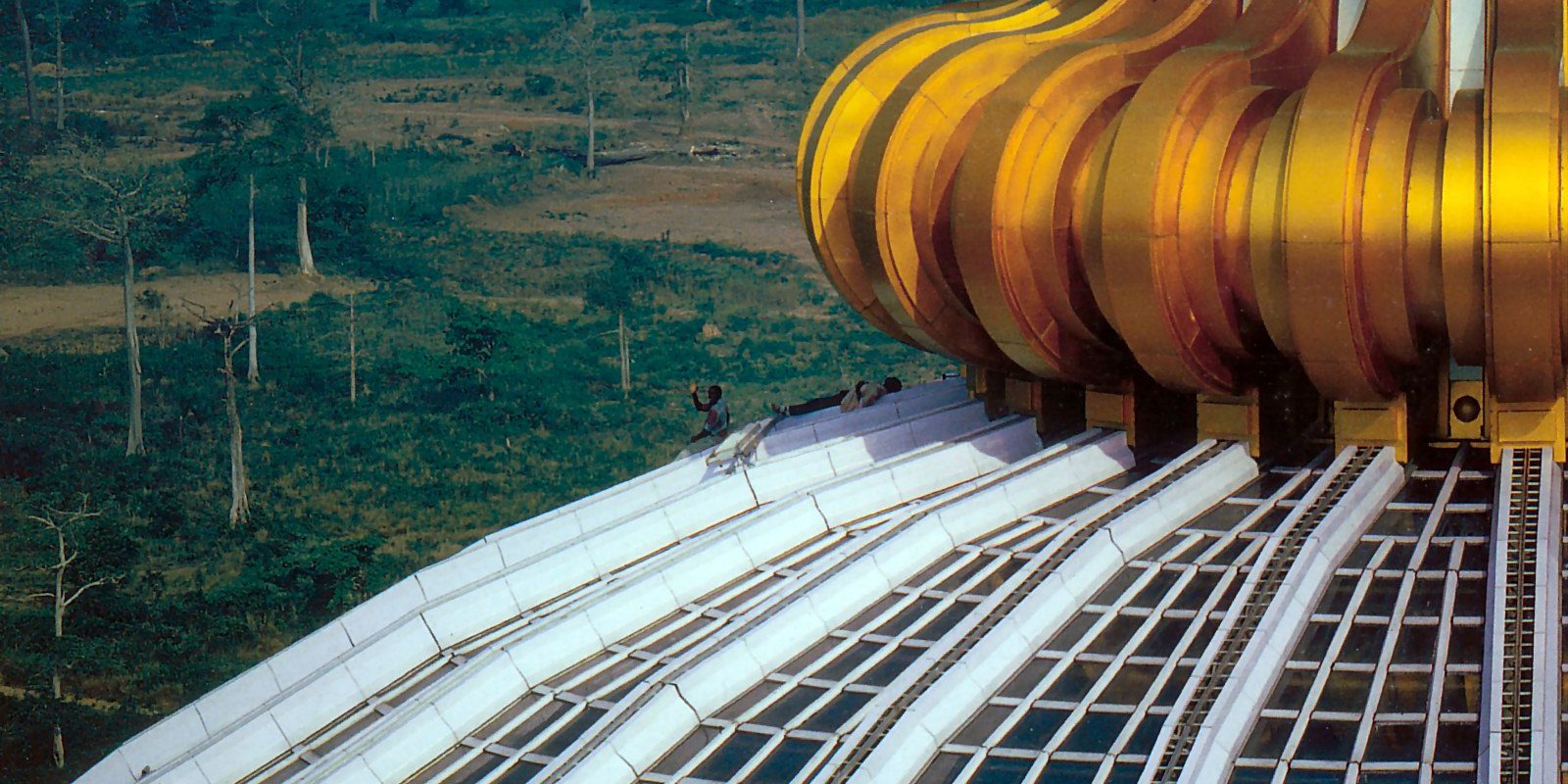 Is dismissing architectural replicas as mere kitsch too narrow-minded?

During the papal conclave and subsequent election of Pope Francis I last month the public eye closely followed all the developments around Rome’s famous Saint-Peter basilica. While Bernini’s renowned collonades embraced journalists and excited Catholics alike, it remained rather quiet at the Notre-Dame de la Paix, an almost exact copy of the Saint-Peter, located in Yamoussoukro, the capital of Ivory Coast. Plans for its construction were drafted thirty years ago and resulted in a remarkable building, which is not only larger than the original but also the largest religious edifice in the world. 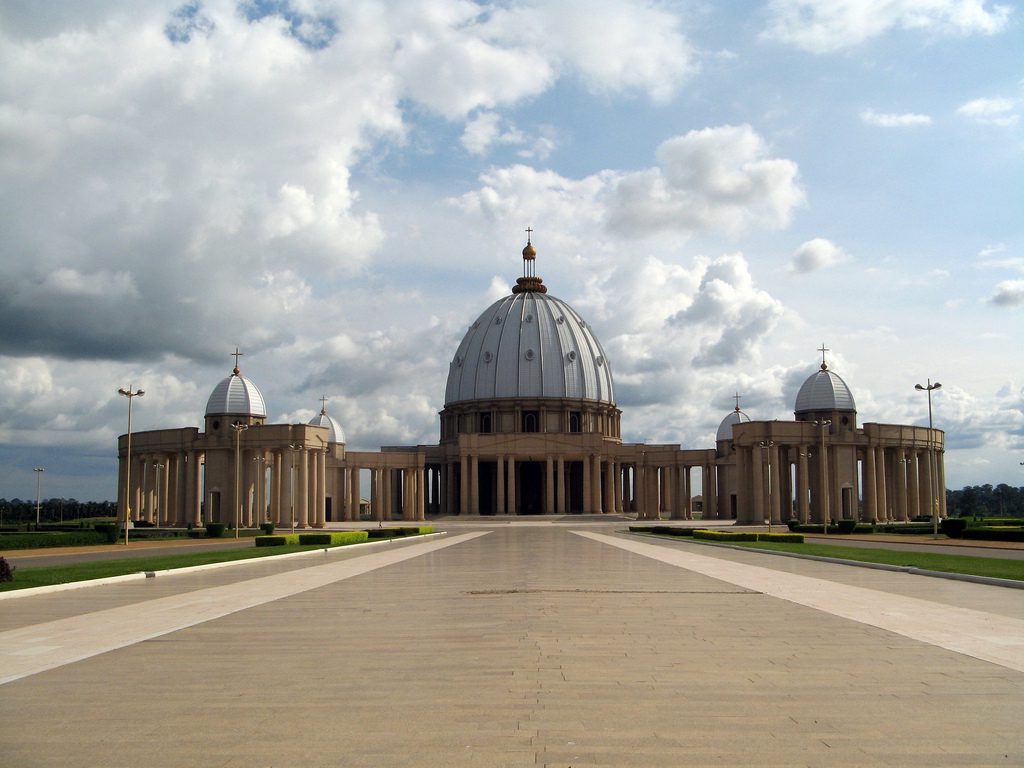 In the early 80s Ivory Coast’s former president Houphouët-Boigny embarked on an ambitious urban development program, designed to transform his hometown Yamoussoukro into the new capital city of the nation. Besides an extensive urban grid, various modernist hotels and ministries he ordered the construction of a 300 million dollar church, located between the city’s outskirts and the surrounding jungle. The design by the Lebanese architect Pierre Fakhoury closely resembles the Saint-Peter, but surpasses it in size. The most obvious difference is the Notre Dame’s lack of an imposing façade, making the dome a more pronounced feature compared to the Saint-Peter. The basilica was completed in 1989 and was consecrated by Pope John Paul II a year later.

At completion, Yamousoukro’s striking basilica was heavily criticised. The fact that the every single element of its construction was foreign and lacked any contextual embedding or vernacular reference was in particular denounced. Apart from the building companies and the basilica’s obvious inspiration, even the stained glass and marble slabs were flew in from Europe. The exorbitant costs, contrasting sharply with local poverty levels, were added straight to the country’s already pressing debts, which was frowned upon by many. It was also argued that the size of the building was utterly out of proportion, not only with Yamoussoukro’s modest built environment, but also with the small percentage of the local population that is actually Christian. Consequently, the basilica’s vast spaces are nowadays hardly used and remain vacant most of the time. That said, the building has survived all the political turbulence of the last two decades and is rather well maintained. 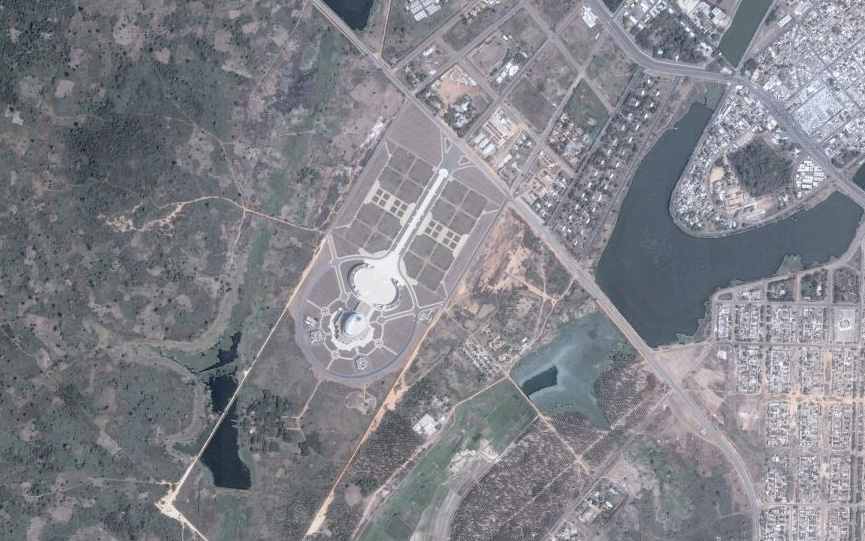 A massive, failed replica of Saint-Peter’s basilica in a middle-sized African city is an architectural spectacle on itself. However, examples of copycat architecture from different areas and periods, like the Notre-Dame de la Paix, could not only be perceived as fascinating rarities, but might also inform and expand our thinking on the recent rise in the construction of copied architectural icons and urban fabrics in China. In the last ten year this country has seen an enormous amount of fake Tower Bridges, Eiffel Towers, English garden villages and Austrian lakeside towns. These examples, ranging from exact copies to vague imitations of a particular architectural style, have mostly been dismissed as simple kitsch by Western architecture critics.

However, it should be noted that the former pope came all the way from Rome to consecrate the Notre-Dame de la Paix in Yamoussoukro, which means that the Vatican did not perceive its construction as a tasteless imitation of one of their holiest sites. The pope actually endorsed the construction of a bigger copy of the Saint-Peter and did not disapprove of Houphouët-Boigny’s rather blasphemous provocation. In fact, religious groups often tend to have rather liberal approaches in dealing with their own original, historic architectural presences. Important Buddhist temples are often duplicated around the world, most notably the famous Japanese Byodo-In in Hawaii, and various Jewish groups still hope to rebuild the Third Temple exactly according to historic designs. The construction of the enormous Abraj-al-Bait complex in Mecca next to Islam’s most sacred mosque is another example of an architectural undertaking in which a rather surprising approach to the particularity and uniqueness of a holy site is applied. 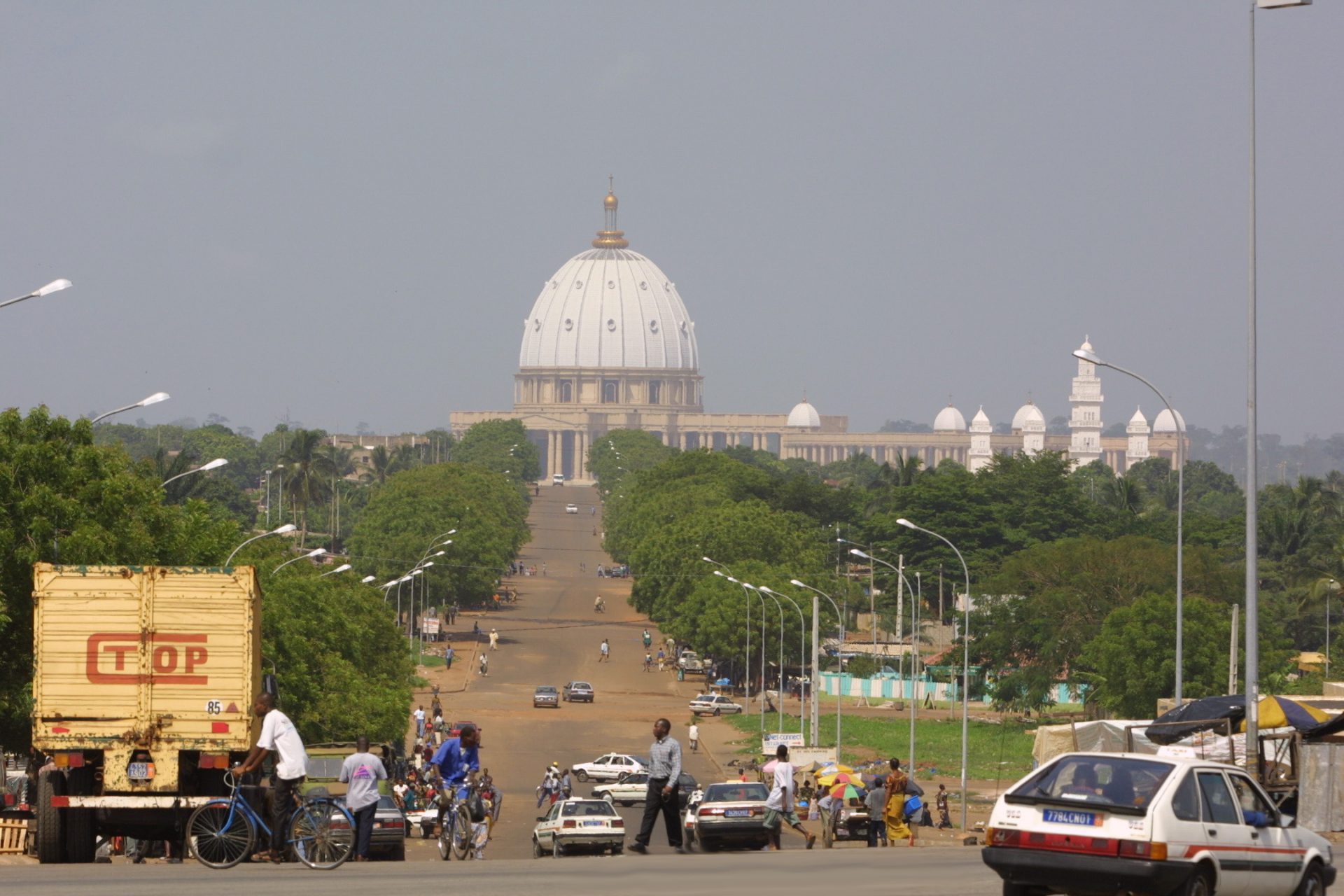 Copying historic edifices or, in the case of Mecca, radically changing the immediate surroundings of a holy site seems not to be perceived as reducing its spiritual value, but as emphasising the contemporariness and modernity of the sites. Clearly, outside the ivory tower of Western architecture criticism and of a global elite demanding the newest, ‘original’ extremities signed by starchitects, different conceptions regarding the need for uniqueness and originality in architecture circulate. It might be insightful to take this notion into account in thinking about copycat architecture and in particular about China’s recent replica boom. For example, in her new book Original Copies: Architectural Mimicry in Contemporary China Bianca Bosker explains how making references in architecture to different parts of the world is seen as a cosmopolitan, sophisticated lifestyle by the growing Chinese middle classes, resulting in a high demand for these typologies. In short, it could be argued that dismissing architectural replicas as mere kitsch is simply too narrow-minded. Even in the case of the Notre-Dame de la Paix in Yamoussoukro, a more open approach towards the practice of imitation might lead to a better understanding of historical and contemporary architecture and urbanism.

add comment
Stephen Hard
Only international Style purists would object to elements borrowed from historical styles. But borrowing from historical architectural styles (as Michelangelo did in designing St. Peter's) is very different from attempting to replicate a building. A great building (or even an OK one) is created by designing for a specific purpose, in a specific place, at a specific time, on a particular site, with all the limitations and opportunities imposed by the specifics. Notre-Dame de la Paix is a failure not because it tried to imitate St. Peter's, but because the architect was not free to allow the purpose, place, time, site, and the limitations and opportunities of the project to inspire his work. I love the idea of the Ivory Coast having a great national church. What they got was a colossal disappointment.
Tim Verlaan
The Dutch are also quite good at replicating the Saint Peter basilica: http://en.wikipedia.org/wiki/Oudenbosch_Basilica. Our lyrical wonder child Frans Bauer married in this church because of its beautiful architecture.
Related