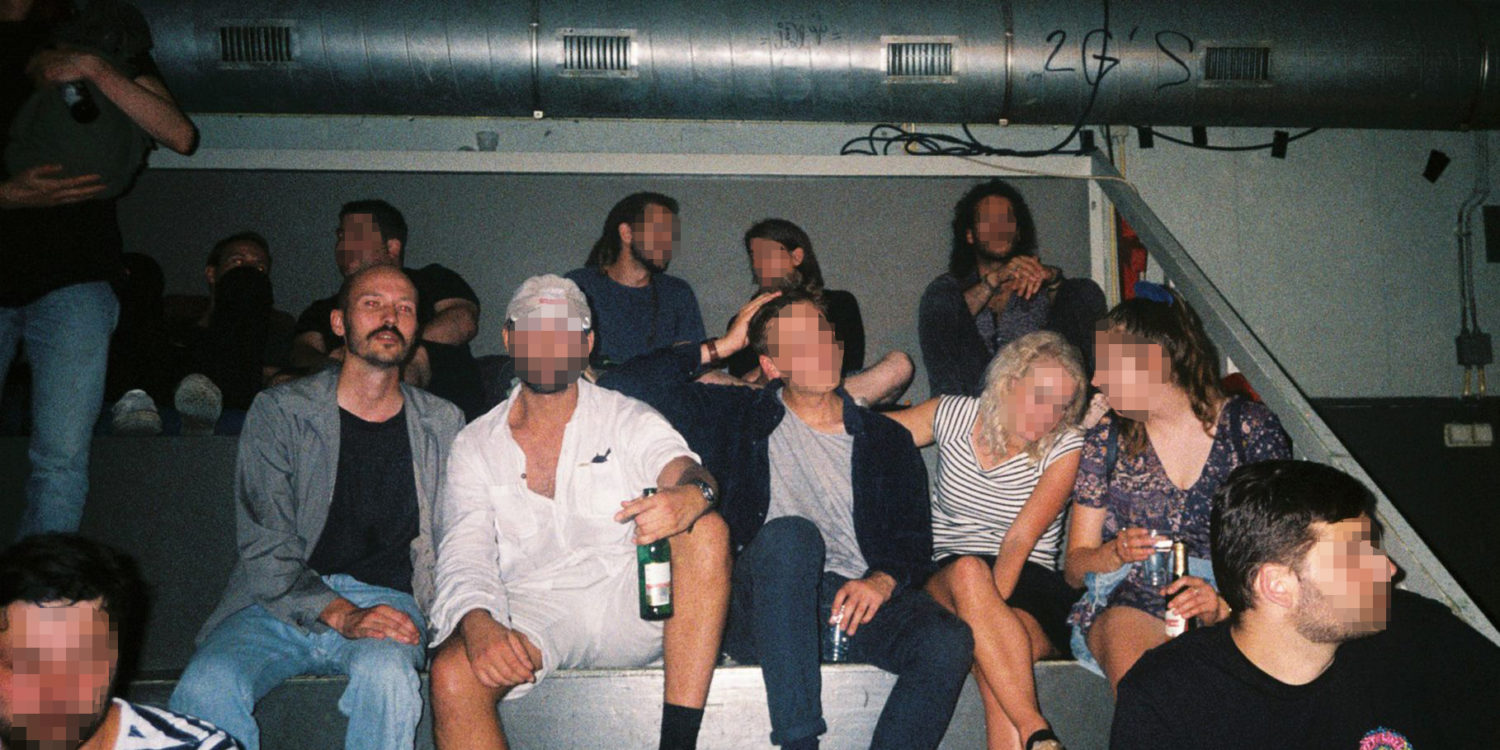 London’s clubbing scene and its creative scene more generally will soon be in terminal decline. Something needs to be done to arrest the growing inability of people to see each other regularly.

I feel a little awkward for saying it, but having been gainfully occupied outside of London for almost a year now, the news that London nightclub Fabric has been forced to close down gave me a pretty strong feeling of vindication at having left the city. Indeed, while I’ve had it quite frequently since moving, the feeling’s especially strong when thinking about my experience of clubbing in the four years I lived in London, sandwiched as it was between two much more active periods in two other cities. But in my efforts to figure out why I’ve reacted in this self-evidently smug way, I’ve increasingly come to the conclusion that my experience of London’s clubbing culture, compared to other places I’ve lived, indicates a wider problem the city faces: you can’t see people regularly.

Admittedly, this seems pretty small in the grand scheme of things, since it’s not something that directly impacts on the city’s productivity or prosperity. But for a city which is meant to have a thriving nightlife, and one that is meant to be creative and full of creative people, it’s a veritable disaster waiting to happen. In London, it’s increasingly hard for like-minded people to get together, spaces to do it are disappearing and we’re getting exhausted by the need to work more to pay for ever higher rent. This affects clubs, because the crowd is less consistent, changing every week, but it also affects creativity in a big way, since regular contact with like-minded people is fundamental to creating the kind of networks of support that really potentiate creativity and a sense of community.

To flesh out this argument, I think it bears relaying my personal experience in more detail. Having left London for Amsterdam at the year’s beginning, when I finally ended up back in a club, it had been well over a year since I’d set foot in one. The experience was palpably strange. It was quite a bad night, at Marktkantine in the west of the city. So bad in fact that one of my friends, who was well aware that this was my first time in a long time, said little all night except to apologise. Each time I assured him I didn’t really care. I was used to being unimpressed, so much so that I effortlessly adopted the same detached insouciance I’d honed over the years in London clubs, the kind of defensive barrier that protects you from both judgement and enjoyment. 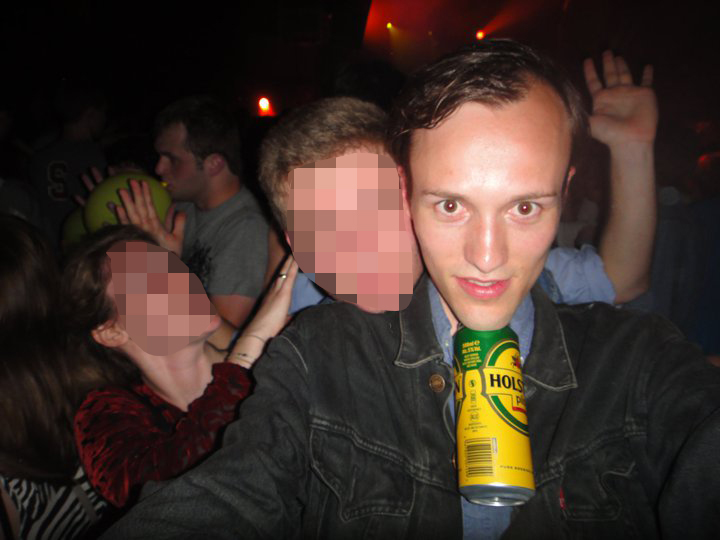 But after a few slightly better nights, I realised this detached air was unnecessary. It was overkill. A few return visits and you end up seeing the same people and stop feeling like an outsider. This feeling is helped by the fact that it’s less difficult to get a group together to go out, since it’s easy to bike to the main clubs and to people’s houses beforehand. Which brings up another massive advantage, it’s much cheaper to get around and much less of a hassle.

There’s a good chance I’ve just been lucky with the group I’ve fallen in with, and I certainly could have been more proactive in London, and more to the point, I’m just one man, I know lots of other people have a great time going out in London. But my quite effortless return to the underground music scene (something I thought I’d consigned to my university days) has made it difficult for me to avoid concluding that the city itself had an impact on my waning interest while I was in London. At London clubs, I was distinctly anonymous. For me, it always felt like there were too many people, with too many divergent desires momentarily coming together in a single place only to all depart at the end of the night and most likely never see each other again. It wasn’t a recipe for feeling a part of something. 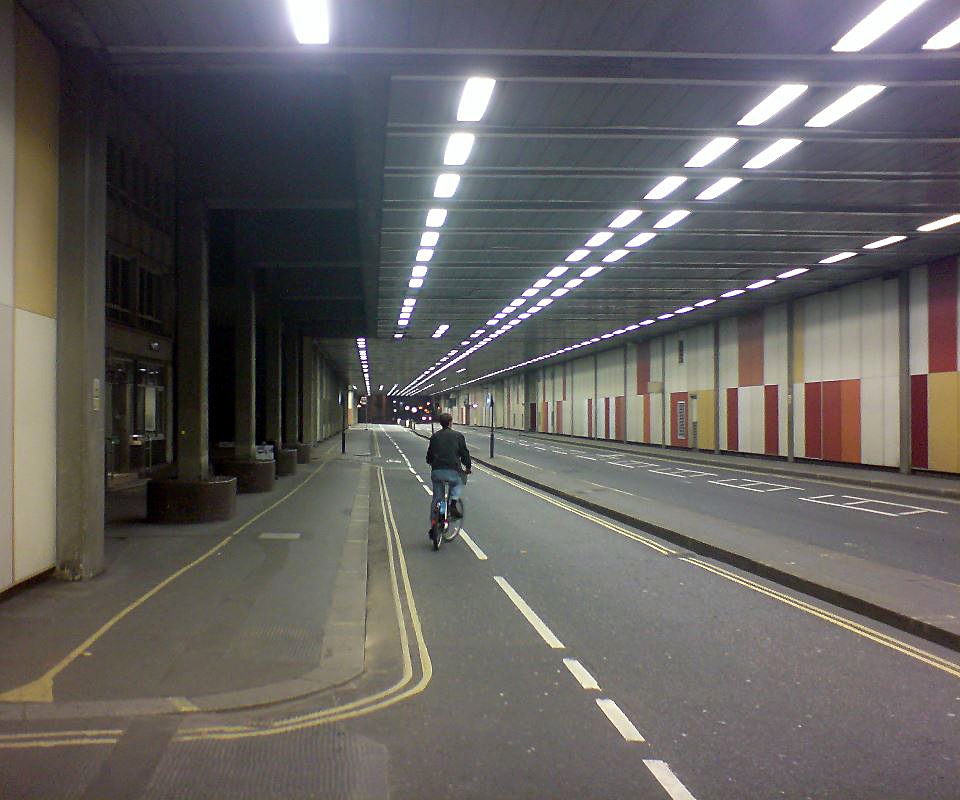 One of only two pictures taken of me clubbing in London, tellingly, on the long journey home…

In major cities like London, having a big club, centrally-located, feels quite distant from what it would have been back when these places first started cropping up in the late 80s. Back then (at least judging by the documentaries, I was but a baby) you could actually get all types of people, regularly in one place, carefree, loved up on E and swept away by the collective relief from Thatcher’s Britain. Now, despite there being probably even more people who would be up for going out in London on a given weekend (and enough bullshit in the real world to be relieved from), this one big central space will not create that same sense of coming together.

To explain why this is so, I’ve been thinking about a term used by humanist geographers, writing about how people establish a sense of place. The word is “propinquity” and it describes the sense of affinity or attraction to someone that arises from having regular face-to-face contact or through sharing the same interests with them. Propinquity, these humanist geographers argued, is integral to a person establishing a sense of their place in the world.

But the earlier writing on propinquity was quite conservative (indeed, bordering on fascistic), appealing, as it did, to some vague sense of community derived from common roots. However, Ash Amin and Doreen Massey have advocated a “politics of propinquity” more in accordance with the hybridity characteristic of city life in our modern globalised world. Their version specifically acknowledges that propinquity is always a negotiation between a heterogenous mixture of different groups who share the same space, but stress that it can be a progressive force which allows people to establish an identity based on diversity. 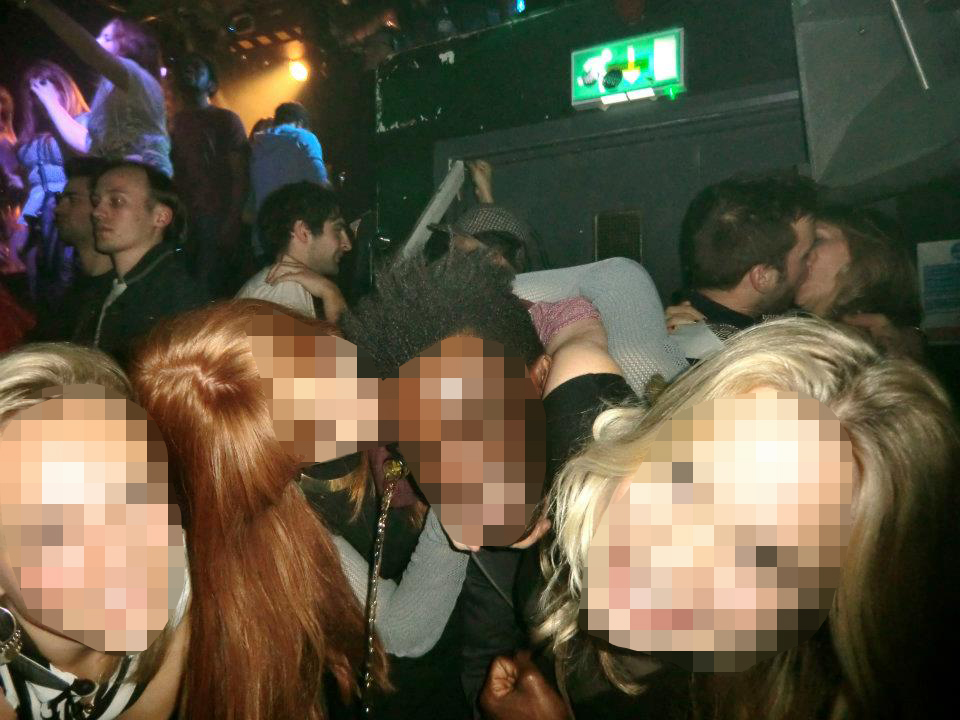 …even more tellingly, the second is of me lurking in the background.

London is still full of places where this negotiation is happening. And some of the fundamental founding ideas behind the modern underground club ought to make it one of these places. But these days London clubs cannot so easily offer the chance for regular encounters. Few people can plausibly go week-in-week-out to a club. The pressures of having to support a life in London by working more and having less free time, lead to frequent exhaustion at the week’s end. The cost of going out and the ridiculous hassle of negotiating a city on London’s scale during the night, all mean that partying all night is too much of a burden to make it a regular thing.

But given the pressures I’ve just listed, the club is not the only space which fails in its promise to provide a place for negotiated propinquity. The city as a whole does not provide sufficient space for people, especially its younger and less settled inhabitants, to see each other regularly. And it’s a pretty serious problem. A city’s whole creative dynamism rises and falls on the ability of people who do similar things and have similar interests to see each other regularly. 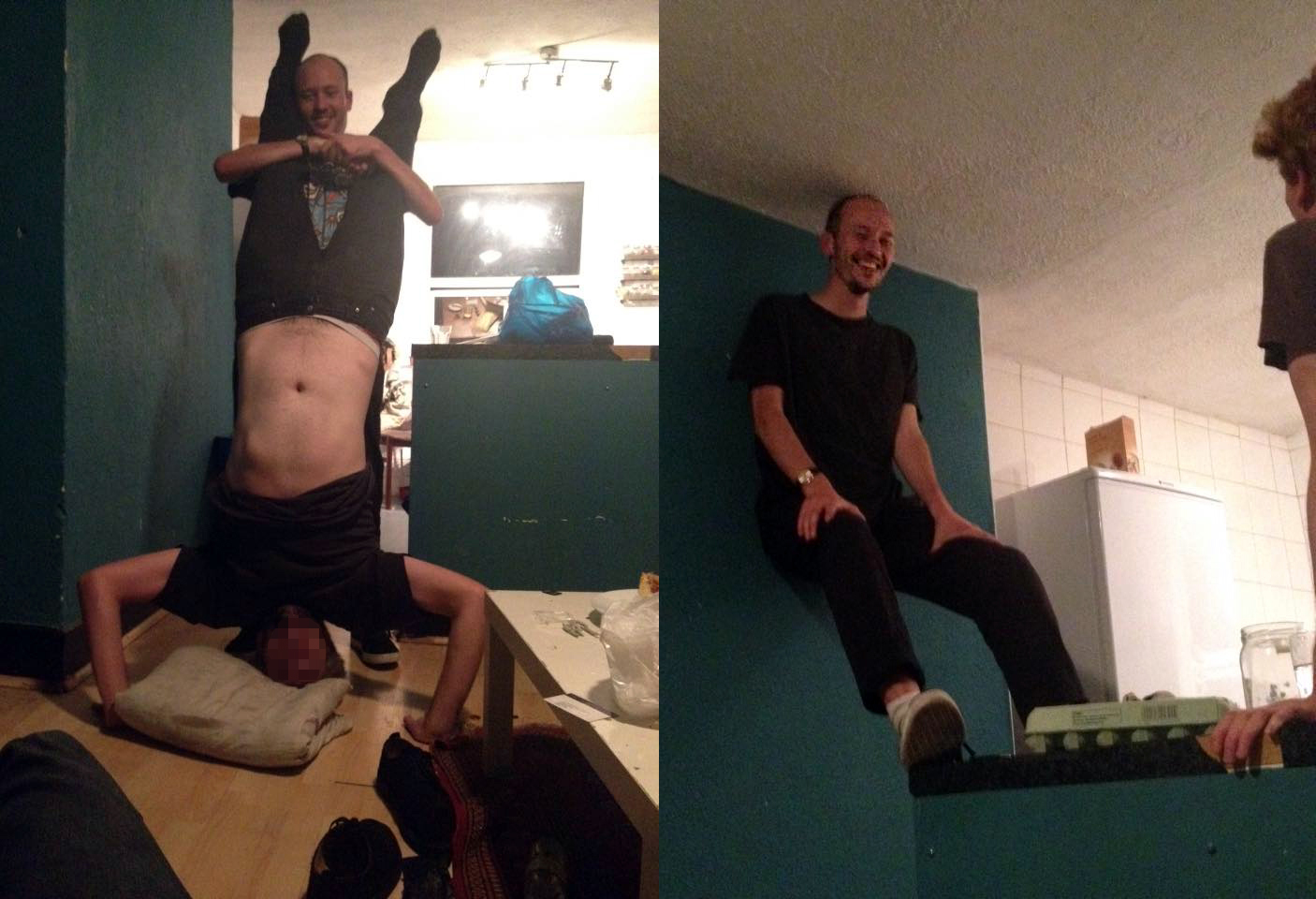 Hijinks at home, only place for it, London life getting pretty sad by this point.

It’s pretty obvious really. If you’re going out clubbing and you see other people in a group who seem like the kind of people you’d like to get to know, then it’s only through encountering them frequently, over an extended period of time, and thereby becoming familiar with their way of being, that you’d feel inclined to link up with them. Likewise, if you are creative but not doing anything creative and you see other people doing creative things, it would only be through regular contact with what they do and how they do it that you would feel confident doing it yourself.

When London was emptier and cheaper, and when people could choose where to live and could live within walking distance of their work, their friends and the places they socialised, with enough free time and a cost of living that left enough for sociability on a regular basis, then the city could produce the conditions for autonomous creativity. That freedom just isn’t afforded to Londoners any longer. 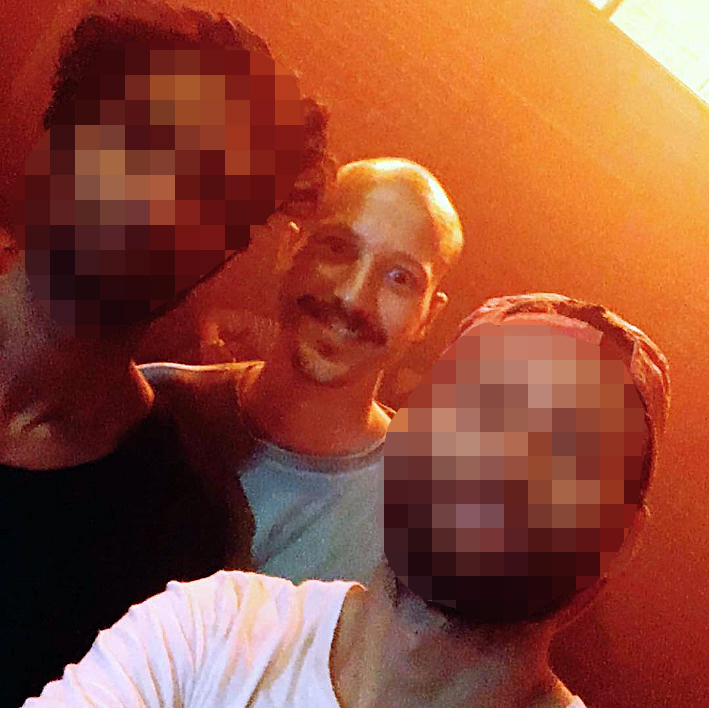 One of my first decent nights in Amsterdam.. is it all over my face?

My initial response to this state of affairs is to suggest that everyone should, like me, leave London right away, thinking maybe that this is the only way and at this point London’s gone beyond. But where I’ve ended up, Amsterdam, it’s going the same way, it’s just a bit behind (and besides, I’ll probably go back to London before too long, it’s gotten under my skin). Rather, I think communism is the solution. And more specifically a commune.

Faced with a fundamentally hostile regime of urban governance, people who want to have a regular collective night of ecstasy (surely a lot of people), need to agree to act together to make that happen, that is, they need to establish a commune. They need to collectively organise to rearrange their lives around the basic statement: we will regularly see each other and have fun. They need to assess their needs according to whether they fulfil this basic statement. Is it necessary to travel across town? Is it necessary for clubs to have PR, promotion and an expensive (almost invariably male) DJ? Does this collective night (or collective life) need to happen in a single fixed space? Can this space exist in the current regime of private property? Or do we need to act as if there is no such thing as private property? If we want to live near each other, should we pay as much rent as we do, or should we organise to stop paying rent? 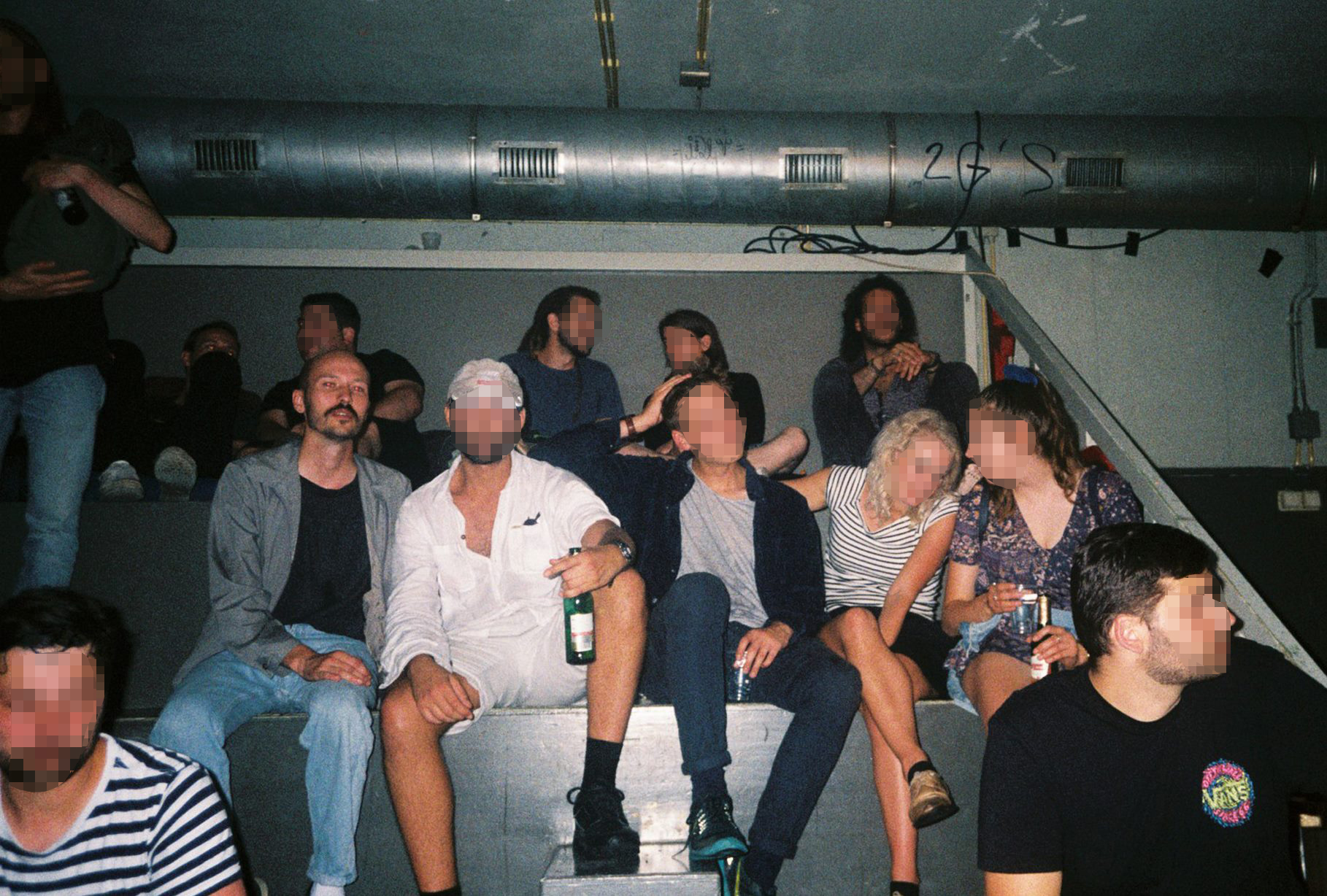 Lots of questions, and many more unmentioned, all arising from the decision to realise a more communal life. London is how it is because its inhabitants have been expertly atomised. The only response is to stand together as a body and claim the city as a space for joy and creativity. It’s not going to be easy. But there’s no other way to reverse London’s decline.