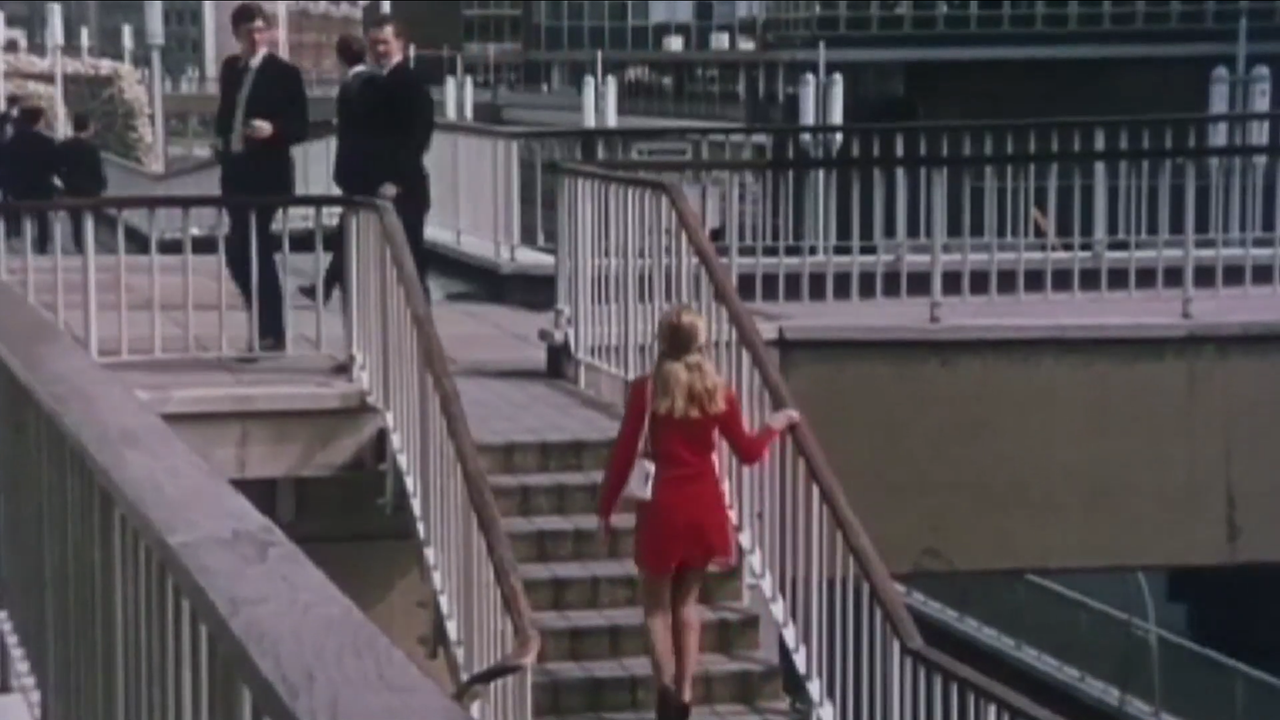 The Pedway: Elevating London is a documentary about the unsuccessful attempt to create a network of raised walkways in the City of London. The film is now online for a limited time. FA did a Q&A with director Chris Bevan Lee.

The Pedway: Elevating London is a documentary about the ambitious attempt to create a network of raised walkways in the City of London. Constructed in the 1960s, the elevated infrastructure soon became obsolete, leaving behind haunting modernist traces in modern-day London. The film was screened at various festivals, including the Architecture Film Festival Rotterdam, and of course at The Barbican, which is integrated in the Pedway system. It is now online for a limited time. FA talked to director Chris Bevan Lee about the documentary and London’s ‘streets in the sky’.

After World War II, much of London was in rubble and had to be built up from scratch, allowing ambitious architecture and urban planning. One of the schemes for a new London was the ‘Pedway’, a network of elevated walkways throughout the City. The plan was only partially carried out as a result of budget cuts and modified plans, with part of the pathways leading to dead ends and physically decaying over time. Next to this, the idea of separating pedestrians from motorised traffic became outdated after changing planning paradigms and everyday urban dynamics. Nowadays, in a nostalgic, gloomy and inconvenient way, the Pedway’s remnants remind us of a future that never came.

Mark Minkjan: How did you experience the Pedway when going around the City, before coming up with the idea to make a documentary about it?

Chris Bevan Lee: I was first introduced to the Pedway in the same way many others have been – by getting lost on the Barbican deck. That was some time ago during a trip to London, but it was a while before I realised what they were. Thanks to the fairly recent trend of retro blogs, I saw some images of the area surrounding London Wall and was struck with the feeling only nostalgic folk have, where you over-romanticise an idea and wish to emerge yourself in that world. I wanted to find out more about it but had trouble doing so. The information out there on the Pedway was as segmented as the Pedway itself, so I felt that seeing as no one had made anything on the subject, I would do so myself.

MM: What was the most surprising thing you found out about the Pedway when making the documentary?

CBL: Going through the plans at the London Metropolitan Archives, I was really surprised at how expensive it was to construct the bridges that connected the buildings. Especially those built in the late 80’s, early 90’s that have now been demolished. The other thing is that I wasn’t expecting to find such an enthusiastic and knowledgeable audience as I have. My intention was to make the kind of documentary that I would like to watch, and so I made particular decisions that I thought may alienate some people. Having said that, so far the response to the film has been wonderful.

MM: Towards the end of the film, the nostalgia of a future that never became reality is discussed. When drawing a comparison with New York’s Highline, do you think the Pedway will be regarded valuable heritage in the near future and used again, perhaps for different purposes?

CBL: I’m not aware of the ins and outs, but the deck at London Wall with the kiosks on is currently covered up along with St Alphage House, one of the few remaining 60’s skyscrapers. I believe they are retaining part of the highwalk, as access is needed for the Barbican and Museum of London, but a lot will disappear over time and will be remembered as a folly. The South Bank has been successful with its pedestrian deck of restaurants and bars and Sir Nicholas Kenyon has been using the New York Highline as possible inspiration for a way to open out the Barbican. The London walkway experiment has been more valuable to planners, architects, students and those of us who like to live in the past.

MM: Would you be disappointed if most of London’s elevated walkways would disappear?

CBL: I take the Pedway whenever I walk into the city but I can no longer get onto the deck at London Wall, which is my favourite part. It saddens me when I have to walk around it because I love seeing the city from the perspective you only get from the walkways. It was wonderful to be in the city and to have such a place to yourself, but nothing was happening there and the city does need to move on. It would have been great to use those kiosks as pop up food stalls for city workers to buy burritos or falafel. The Pizza Express at Albangate is never empty and with newer office blocks being built, there would be enough hungry and thirsty city workers who would have enjoyed the gardens, shops and view on their lunch breaks.

Mark Minkjan
Mark Minkjan is an urban and architectural geographer. He is Editor-in-Chief at Failed Architecture and produces the Failed Architecture Podcast. He has written for publications including VICE, The Guardian and The Architectural Review. In 2016, Mark received a talent grant from the Dutch Creative Industries Fund to develop new forms of architecture criticism. He received the Geert Bekaert Award for architecture criticism in 2017 and curated the 2019 exhibition “The Right to Build: Self-build Between Dreams and Reality”. Mark currently teaches at Amsterdam's Academy of Architecture and Gerrit Rietveld Academy.
Chris Bevan Lee
Chris Bevan Lee is a director and editor of documentaries and online content.

add comment
Catherine
It was so sad that the 'Pedways' - because of the horrid concrete brutalism that planners seemed to love in those days - were not made more attractive, and instead tended to look bleak and creepy, when they should've been wonderful traffic-free worlds. What a wasted opportunity. Even sadder that nobody thought to plant greenery in them, like with the brilliant New York Highline. Also - if it had been me designing these - I would've used ramps instead of steps. Steps can look offputting and user-hostile, and that was one of the reasons the Pedways failed to take off. If I were 'King for a day' I would ban concrete and great ugly slabby tower blocks or those steel-and-glass monstrosities. And - encourage more Women to become architects/town planners.
IO Architecture
Interesting documentary! Things have changed so much since the black and white scenes.
Related