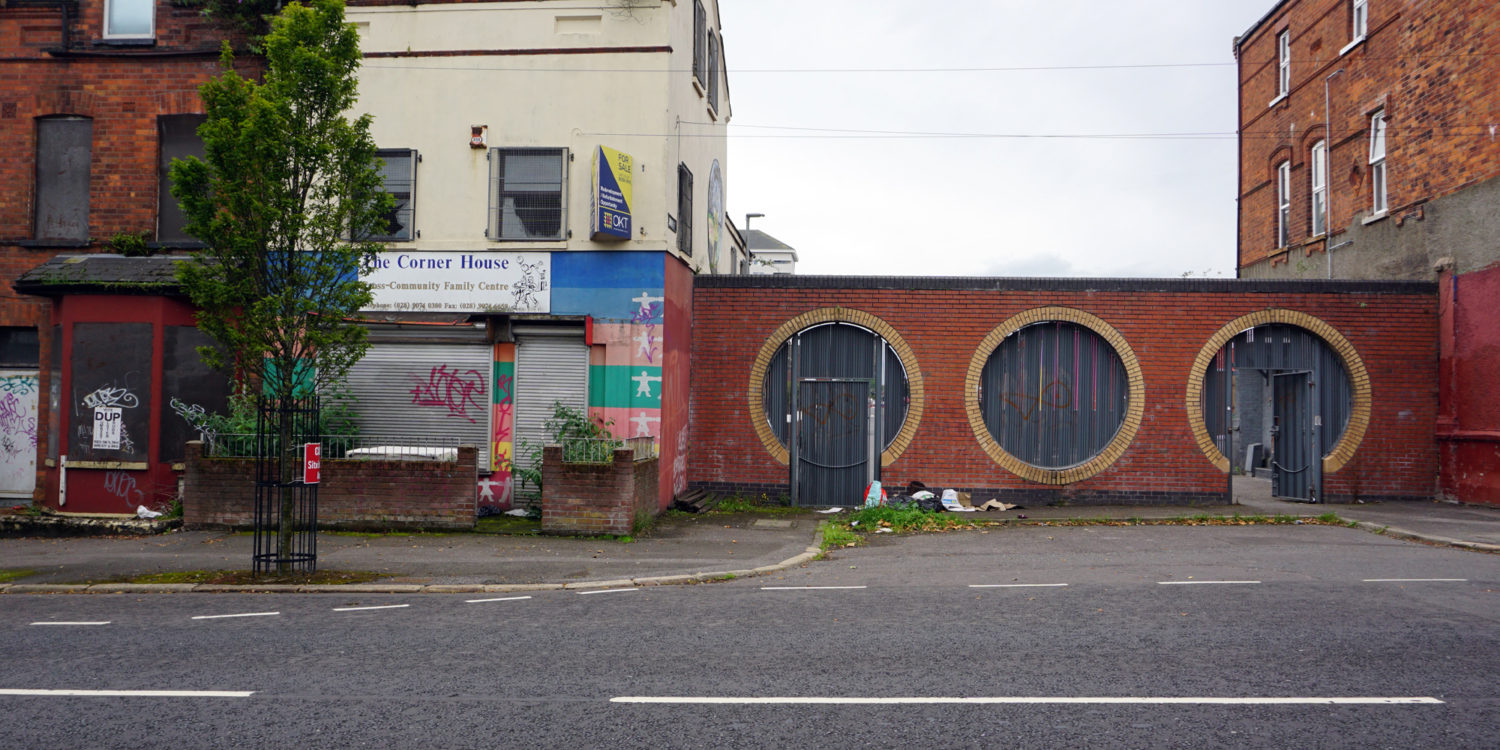 Despite their role as both a stage and container of ongoing tensions, Northern Ireland's Peace Walls were largely ignored in the coverage of recent unrest, even as they formed the main backdrop for the violence on show.

When violence broke out in Northern Ireland earlier this year, I immediately thought of a fence. Or, more specifically, the formidable absence of a particular fence in North Queen Street, Belfast. Initially constructed in 2001 as a temporary measure to shelter houses and the residents occupying them during uncontrollable sectarian violence, the structure’s materials were plainly vernacular: a brick wall with a three-tiered wire mesh on top. It sat on an interface between the mostly Catholic/Nationalist/Republicans in the New Lodge neighbourhood and Protestant/Unionist/Loyalists in Tiger’s Bay, and was thus a flashpoint of sectarian violence between communities. But on 15 March 2021, the fence was removed and replaced with a much smaller barricade, in what was the culmination of several years of consultation and delicately facilitated discussion between the communities, led by a consortium of grassroots initiatives. It was a four-metre-tall victory that felt monumental in scale. Three weeks later, however, this momentarily triumphant site became a flashpoint of violent unrest, as the now seemingly scant barrier sat naked against soaring petrol bombs, masonry, the howling cries of boys and men, and a hijacked, then exploding, car.

Visible emblems distinguishing one ‘side’ of the conflict from the other still permeate the urban landscapes of Northern Ireland’s capital city Belfast and the nearby city of Derry (both epicentres of the three-decade-long conflict known colloquially as the Troubles). Flags are always at full-mast to mark allegiance to the United Kingdom, and likewise, a smaller but still significant number marking allegiance to the Republic of Ireland, as well as kerbstones which lay the Irish tricolour at your feet. Murals depict ‘heroes’ of the conflict, injustices gone unresolved. Perhaps most overtly, fortification walls, fences and barricades (including the fence at North Queen Street) criss-cross between working-class neighbourhoods, in an attempt to ensure tensions between communities do not lapse into further conflict. These fortifications have been rebranded with the official euphemism ‘peace walls,’ but I prefer the name ‘interface,’ acknowledging them not just as material sites, but also socio-political and psychological (thereby avoiding a common habit in Irish colloquialism, that I myself am guilty of: softening the pain of an event with cosy language). 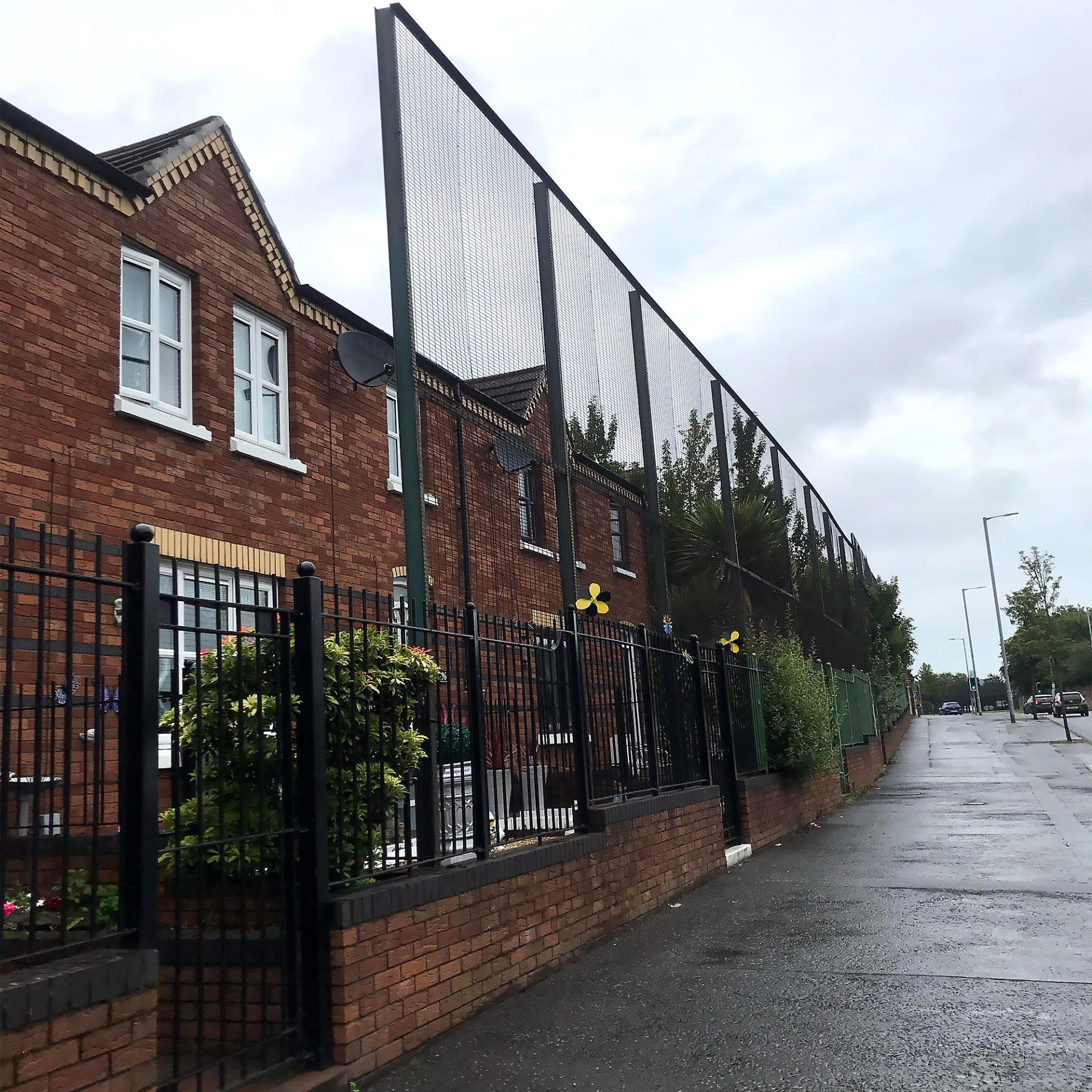 A fence protecting houses on North Queen Street between Spamount Street and Duncairn Gardens in North Belfast. This image was taken in July 2020, before the fence was partly removed.

While the original intention of the fortifications was to prevent violence, many were built against the wishes of separate communities, who had themselves come together across sectarian lines to agree where barriers should sit, therefore dividing an area at times amicably. Under Lt. Sir Ian Freeland’s leadership, however, the British military placed them elsewhere, making hundreds of families homeless and other individuals ‘refugees’ to the conflict. In this context, it comes as little surprise that these very fortifications have often acted as both a container and a stage for the ongoing violence that we witnessed return in March. Their immense height provides communities with enough protection to block projectiles from landing in their gardens, smashing windows and harming bodies. But they provide so much else too: an obscuring of the identity and humanity of those concealed behind the walls; mixed community contact; an unavoidable reminder of a lived and inherited trauma; and a canvas to display the complex and contested histories of harm that still remain unresolved. Interface communities are also more deprived than any other community in the UK and it is almost unanimously agreed that interfaces have prevented such areas from flourishing economically, socially and culturally. This spatially bounded and territorial modality of power is demonstrable of an in-between state: the law has failed, yet under the wall’s shadow peace cannot fully persist.

In its analysis of the recent violence, mainstream news coverage completely ignored these fortifications. I watched clip after clip of young men and children leap across gaps in the interfaces, yelling expletives loaded with sectarian discourse, throwing glass bottles, planks of wood and, more painfully reminiscent of the Troubles, petrol bombs. And yet few, if any, mentioned the fortifications as central actors in the unrest. Having grown up in a town just west of Northern Ireland, I’ve dedicated many years to researching the entangled mess that is this bordered context. I am never not shocked by its prominence, and always in awe at how little attention these remnants of conflict receive in the media. This confusion only heightened as each story rendered these walls as passive witnesses to violence, rather than active mediators of ongoing conflict. Instead, the violence was generally attributed either to unionists feeling a sense of betrayal at the post-Brexit border in the Irish Sea, the lack of condemnation of the 24 Sinn Féin politicians who attended a Republican funeral against social distancing rules, organised crime, or the supposed ‘two-tiered’ approach to policing by the PSNI. The press selected the most workable narrative strands from disparate images, interpreting what they saw on the surface, as if the whole arc of Northern Ireland’s proximate history began on 23 June 2016, vanished for four years, and then returned to witness the fallout from Brexit. Meanwhile, the walls sat there in almost every image I saw, hiding in plain sight. 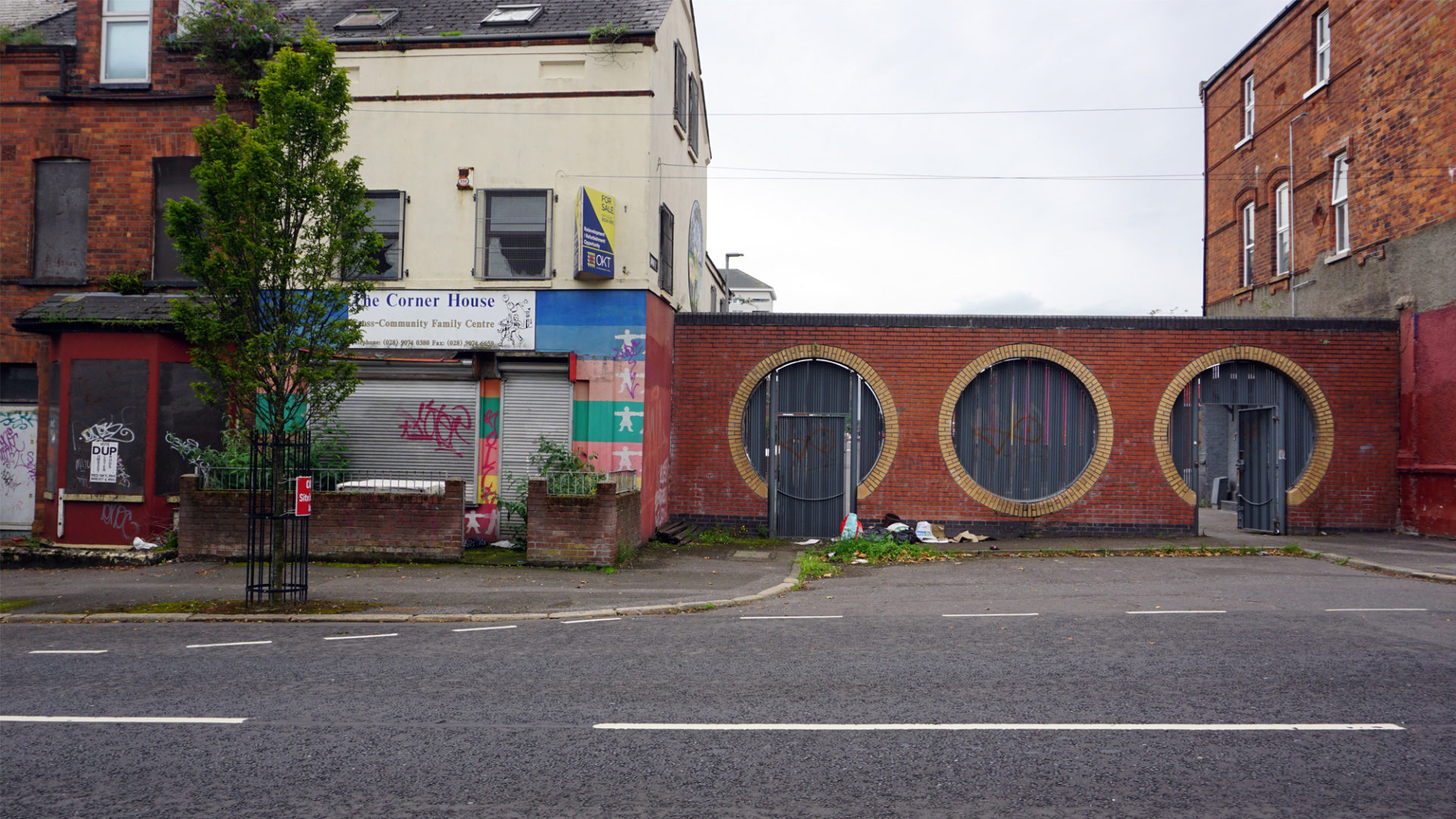 An interface with controlled entry and exit on Duncairn Gardens in the New Lodge area of North Belfast.

It was especially strange that the media chose to overlook the walls considering that they were even criticised by the government of Northern Ireland as long ago as 2013. At that time, then First Minister Peter Robinson and deputy First Minister Martin McGuiness set out a policy framework called Together: Building a United Community (T:BUC) which, among other goals, claimed that interface barriers in N.I. would be removed by the year 2023. Yet this target was criticised by grassroots and peacebuilding initiatives and post-conflict specialists for its impracticality, lack of clarity over how exactly the interfaces may be removed and its top-down approach. The T:BUC framework is foregrounded by the notion that ‘civil society and the community and voluntary sector can only play an active role in the Peace Process to the extent they can do so, and the provision of such opportunity lies within governmental hands.’

This problem with relying too heavily on the state to transform community-level relations was underlined a few years later by the January 2017 collapse of the N.I. government’s power-sharing executive in Stormont – composed of the two leading parties the Democratic Unionist Party (DUP) and nationalist party Sinn Féin – initially because of the DUP’s management of a ‘green energy’ scandal, and subsequently over legislation concerning the Irish language. As a result, civil servants were left to run the country for several years, with the sustained commitment to removing interfaces at a state-level left by the wayside. 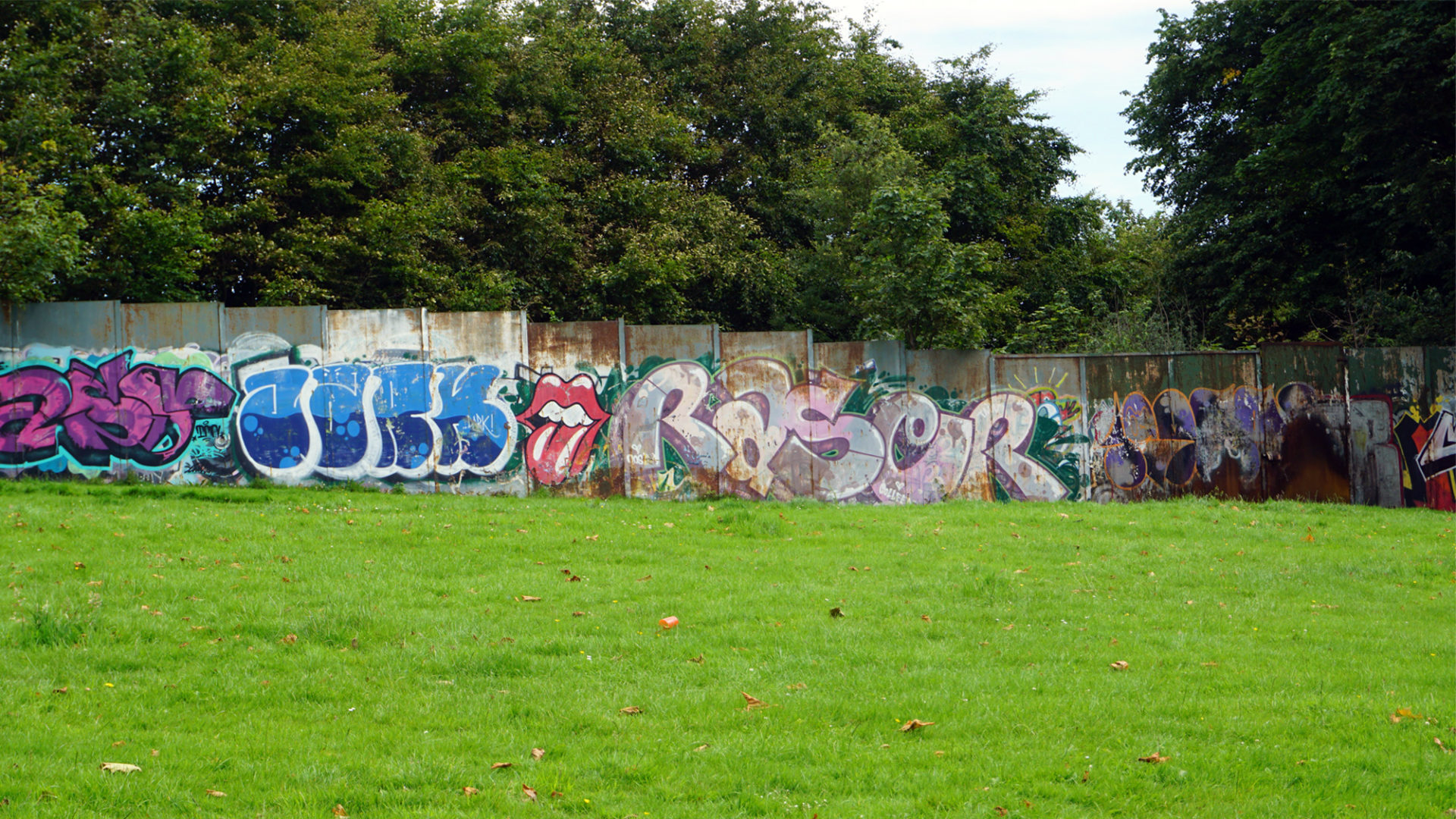 A peace wall cutting across Alexandra Park, North Belfast, the only park in western Europe divided by a wall.

This goes some way to explaining why the media disregarded the interfaced condition in its coverage. The government’s failure to achieve its goal of removing the interfaces suggests a fundamental defect in the contemporary approach to peace work in Northern Ireland: a can of worms the media appears unwilling to open up. But ignoring the concrete architectural conditions facing interface communities also serves to ignore the grassroots initiatives and advocacy groups that have been most successful in removing the barriers.

The fence at North Queen Street is part of a wider area called Duncairn Gardens, erratically composed of thirteen fortifications of varying material characteristics, from palisade fences at 5m in height, to brick walls with metal circular gates for controlling pedestrianised access to housing, as well as seven vacant spaces. The interfaces largely intersperse and enclose the New Lodge area that concurrently features as the seventh most deprived of 581 wards in N.I., and the second most deprived in terms of income (the level of social deprivation in areas around N.I. is commonly congruous with the volume of interface barriers present). As such, Duncairn Gardens has often featured in policy documents and frameworks as an area that would benefit from funding and intervention at a state-level. The district has received the largest amount of international funding (from the International Fund for Ireland (IFI) as well as The Atlantic Philanthropies) channelled through the EU’s PEACE programmes, and culminating in the grassroots initiative Duncairn Community Partnership (DCP). The group’s focus is on promoting active dialogue across interface communities, empowering local residents to take ‘joint ownership’ of their area, stating that ‘community cohesion and confidence is an integral part of [our] work, as is engagement with those who may not have previously participated in community relations activities.’ Diverging from the government’s unstable T:BUC framework, DCP promote change from the ground up. Despite an unstable future for this funding since Brexit, the group have been responsible for successfully removing four interfaces since 2013 through countless hours of laborious and delicately facilitated discussion between communities. 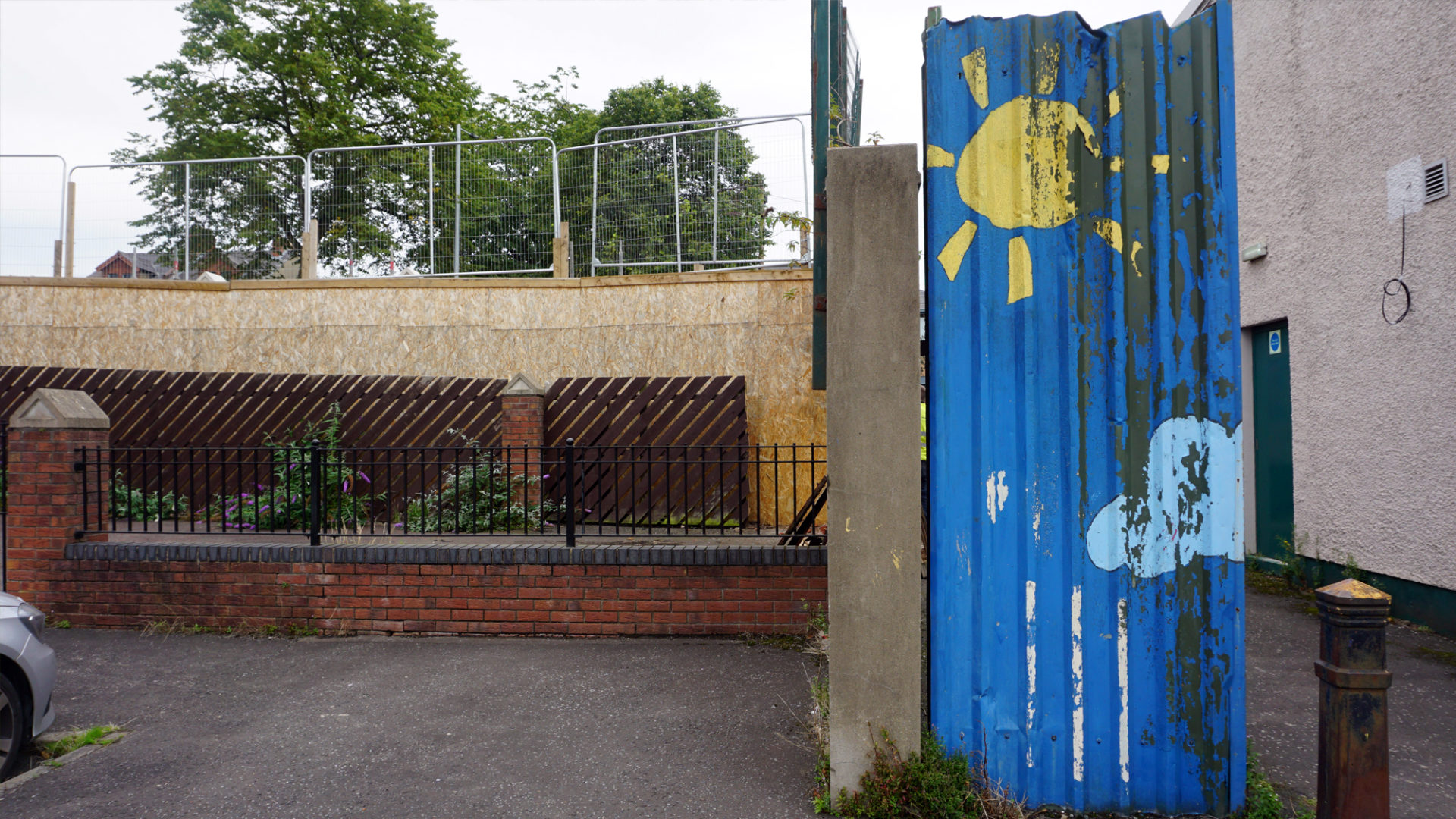 A peace wall in Duncairn Gardens, North Belfast, which was partly removed in January 2020. Authorities added a temporary fence to the top of the structure in June 2021 due to flare-ups in violence.

Most of those perpetrating violence earlier this year were young men, born in the immediate wake of the Troubles. They are often referred to as ‘ceasefire babies’; born after the signing of the Good Friday Agreement signed between Westminster, Stormont and the Dáil Éireann. Lyra McKee, the 29-year-old journalist and LGBTQ+ campaigner who was tragically shot during sectarian riots in the Creggan area of Derry on 18 April 2019, wrote in her last ever article that she had, ‘always hated that name. I hated the mocking tone in which it was usually said, as if growing up in the 90s in Belfast was a stroll.’ Her words testify with lucid clarity the complexity of inherited conflict, the many actors involved in forming sectarian subjectivities, and the disaffection of Northern Irish youth living in the shadow of walls. There are more interfaces today than there were at the end of the Troubles, with 99 in existence in Belfast alone. Furthermore, in this post-sectarian society, 30 people on average each year since 1998 have been made homeless due to having to leave a Protestant neighbourhood, and 90% of children still receive a largely segregated education. A common trend in the analysis that emerged in the aftermath of the unrest rendered these young men’s actions as solely operable on a grand political level. Between networks of civil and state intervention, those who live among the ‘passages’ of these walls make the question of what story these walls should tell and who it should be directed to an especially complex one. It’s a question deserving of sustained attention, community-level support and funding. After all, often the most local-seeming event can contain within it the entire complexity and tragedy of the master narrative.

Maria McLintock
Maria McLintock is a writer and curator based in London. She works as an assistant curator at the Design Museum and as a visiting lecturer in architectural history and theory at the School of Architecture, University of Limerick. She has written on the intersections of architecture, migration and social systems for publications such as Architectural Review, materia arquitectura and Ossian. In 2016, she co-founded a research project called System of Systems – with Danae Io and Rebecca Glyn-Blanco – that addresses the use of technology and bureaucracy in the asylum-seeking process in Europe.