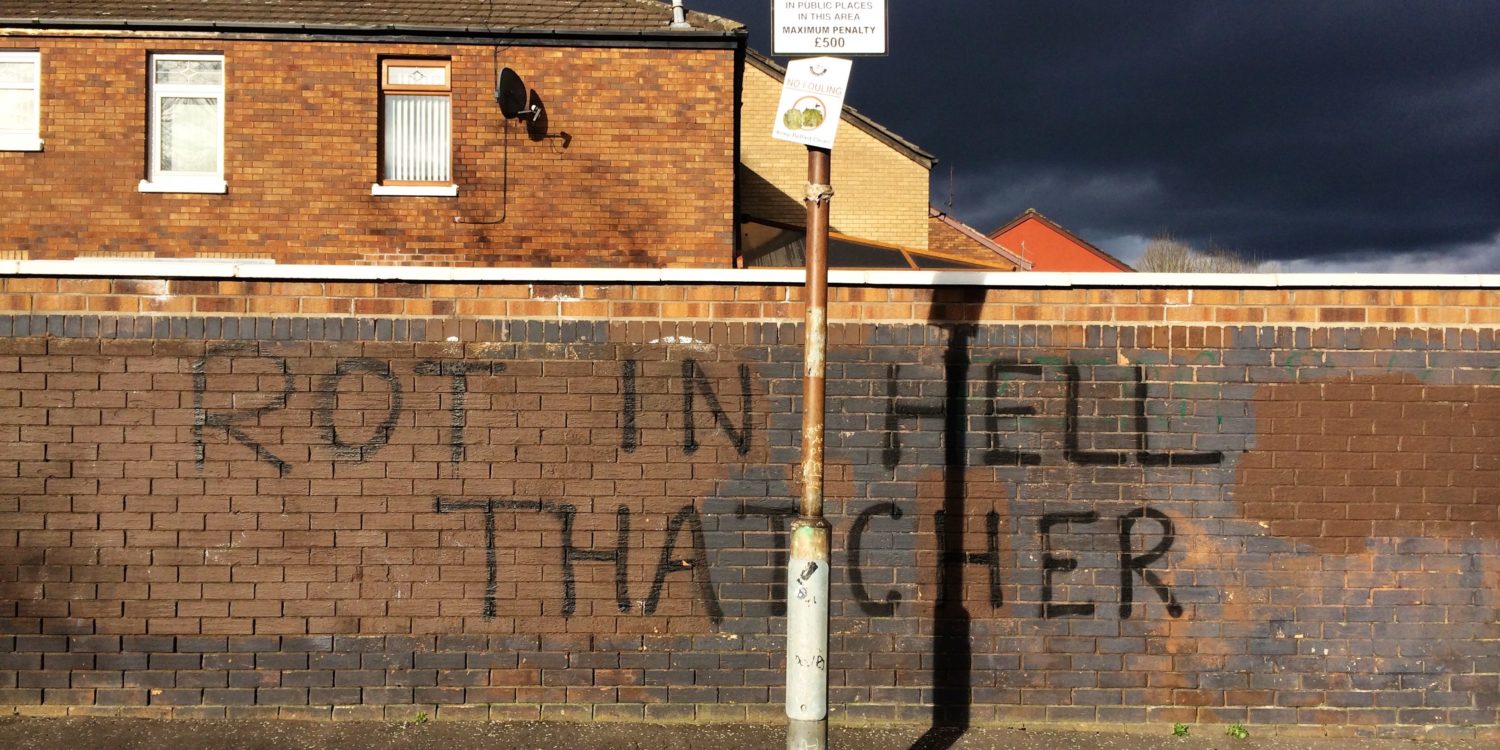 Failed Architecture walked around in Belfast. Here are our first impressions of the city's vacancy and the physical manifestations of the 'troubles', mostly in pictures.

Last week we visited Belfast to talk at the conference Vacant to Vibrant organised by PLACE NI. With two days to experience the city, it remains difficult to grasp for an outsider. The city suffers from several issues, including vacancy; braindrain; heavy traffic (which generates noise, congestion, unpleasant public spaces and barriers between areas); a lack of (affordable) housing in the centre even though there is a lot of empty property that could potentially be converted; and of course the tensions between Unionists/Loyalists on the one hand and Nationalists/Republicans on the other (the former being overwhelmingly Protestant and the latter mostly Catholic – culturally if not religiously), referred to as ‘the troubles’. This is a simplified explanation of a situation that deserves more nuance and explanation. This conflict situation has a severe impact on all the other problems and challenges the city is facing. These tensions overshadow all decision making and lock developments. All political layers represent both sides, making it difficult to carry out strategic and integrated plans because many discussions strand in symbolism and tit-for-tat compromises. Below we share our initial experiences of the vacancy problem and the segregated strongholds of unionist and loyalist communities.

Vacancy
Vacancy (the topic of the conference) is a serious issue for the city. There is empty commercial space everywhere in the city centre and its surrounding areas, boasting ‘To Let’ and ‘For Sale’ signs everywhere, all promising perfect development opportunities–top notch business space on great locations and endless car park facilities. The vacancy is not just confined to typologies that are generally considered undesired for new developments and reuse, also the city’s neoclassical, art deco and other widely appreciated styles are left to rot in Belfast. Here is our short impression of the issue. 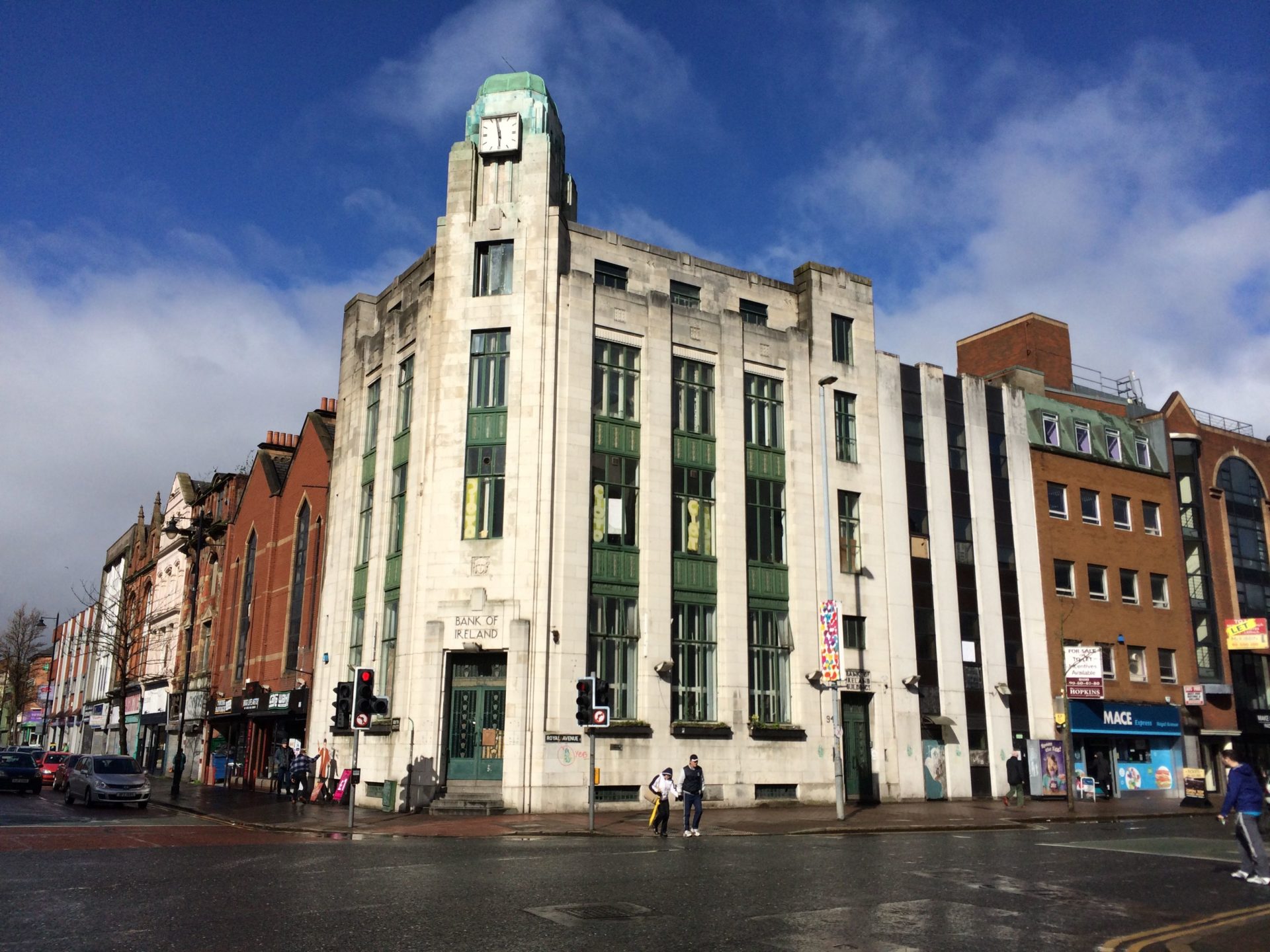 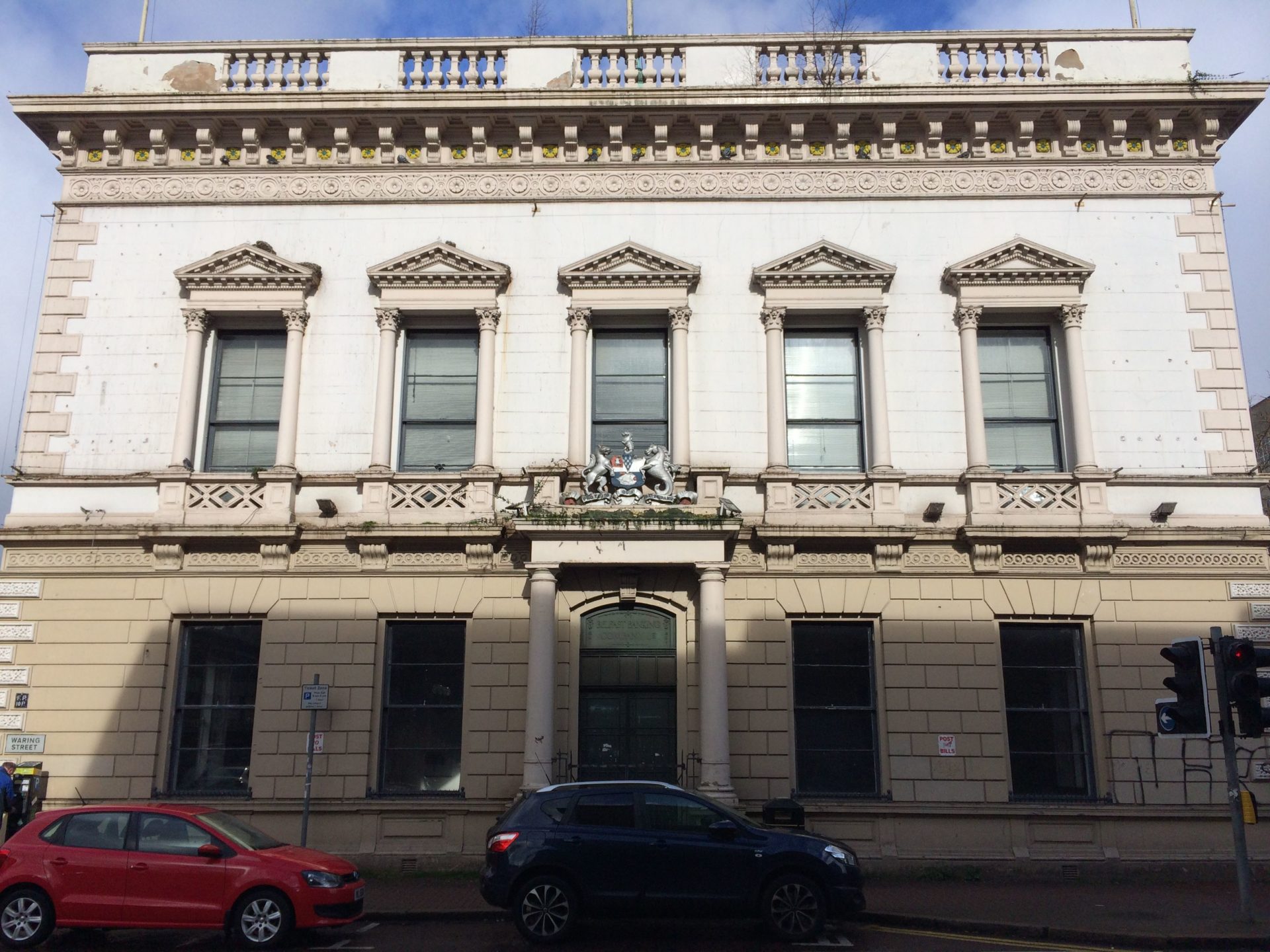 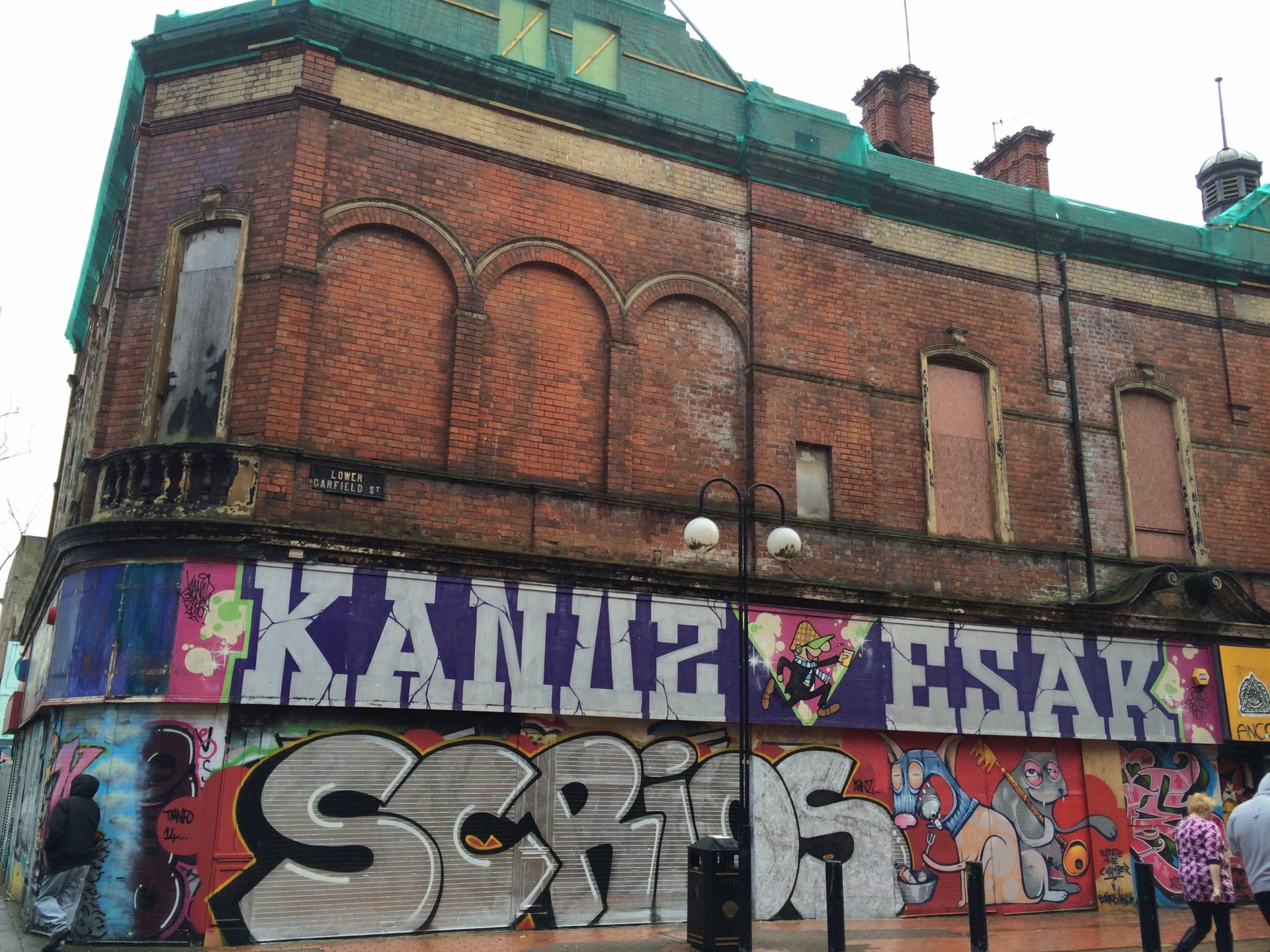 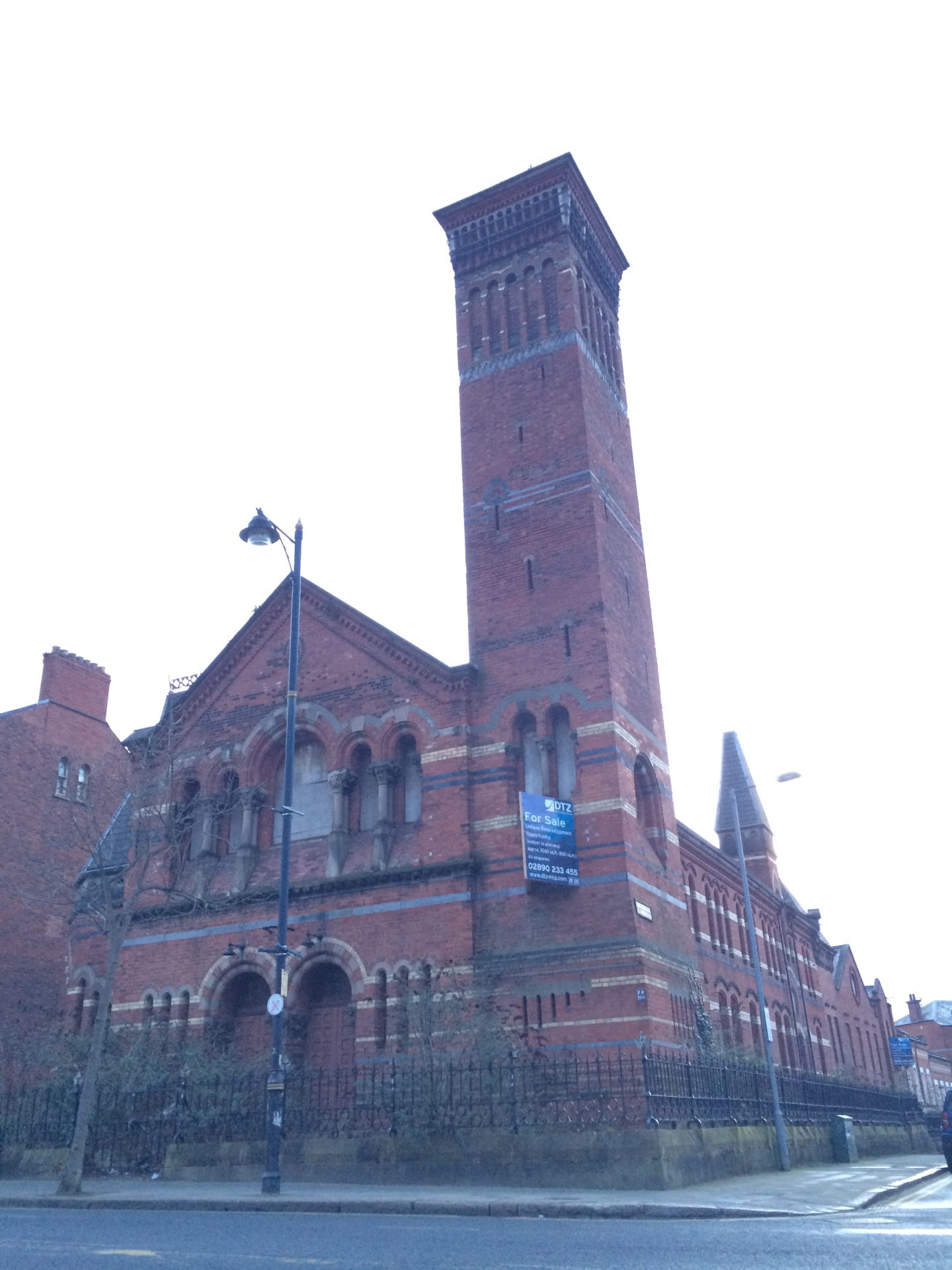 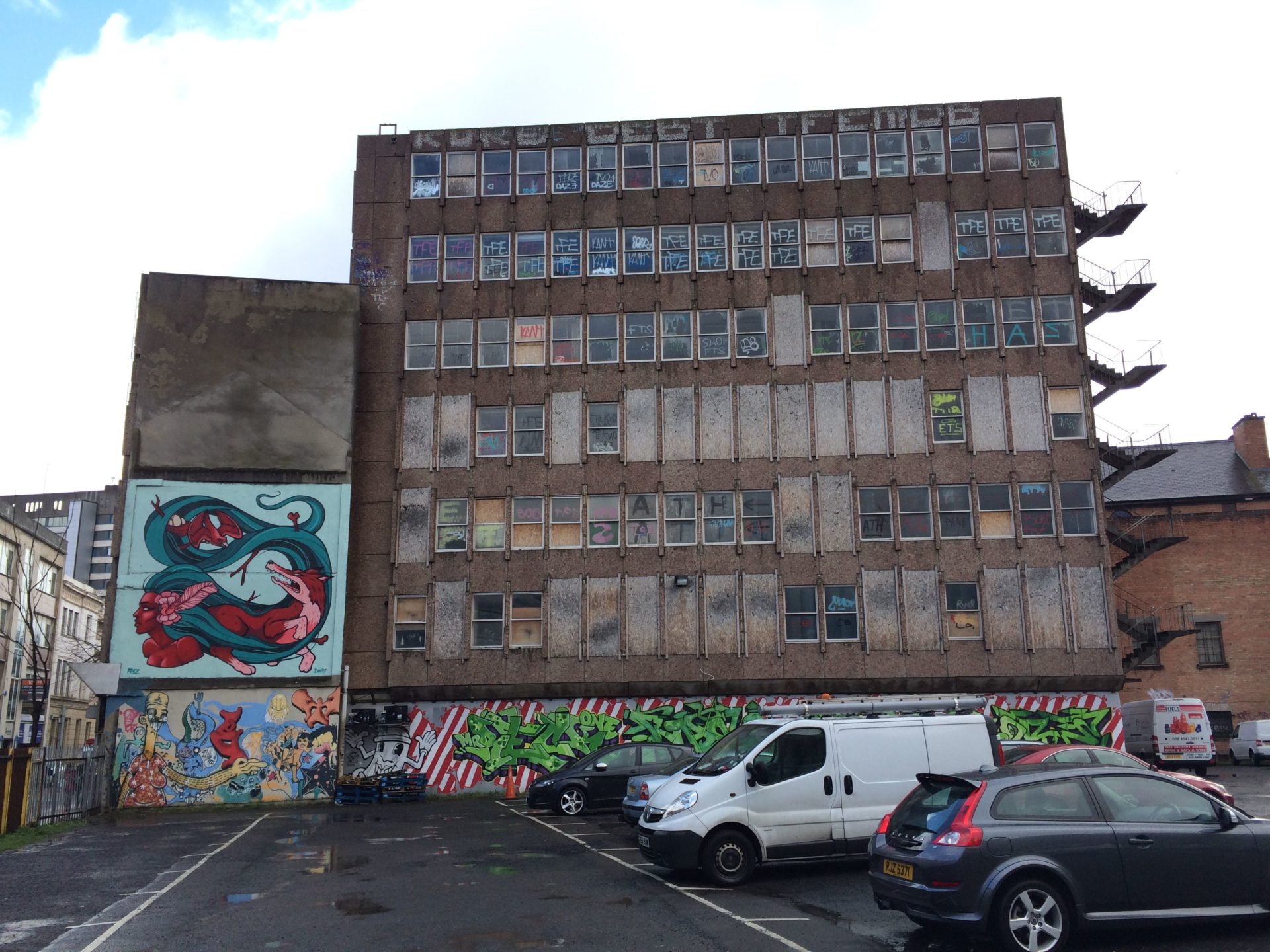 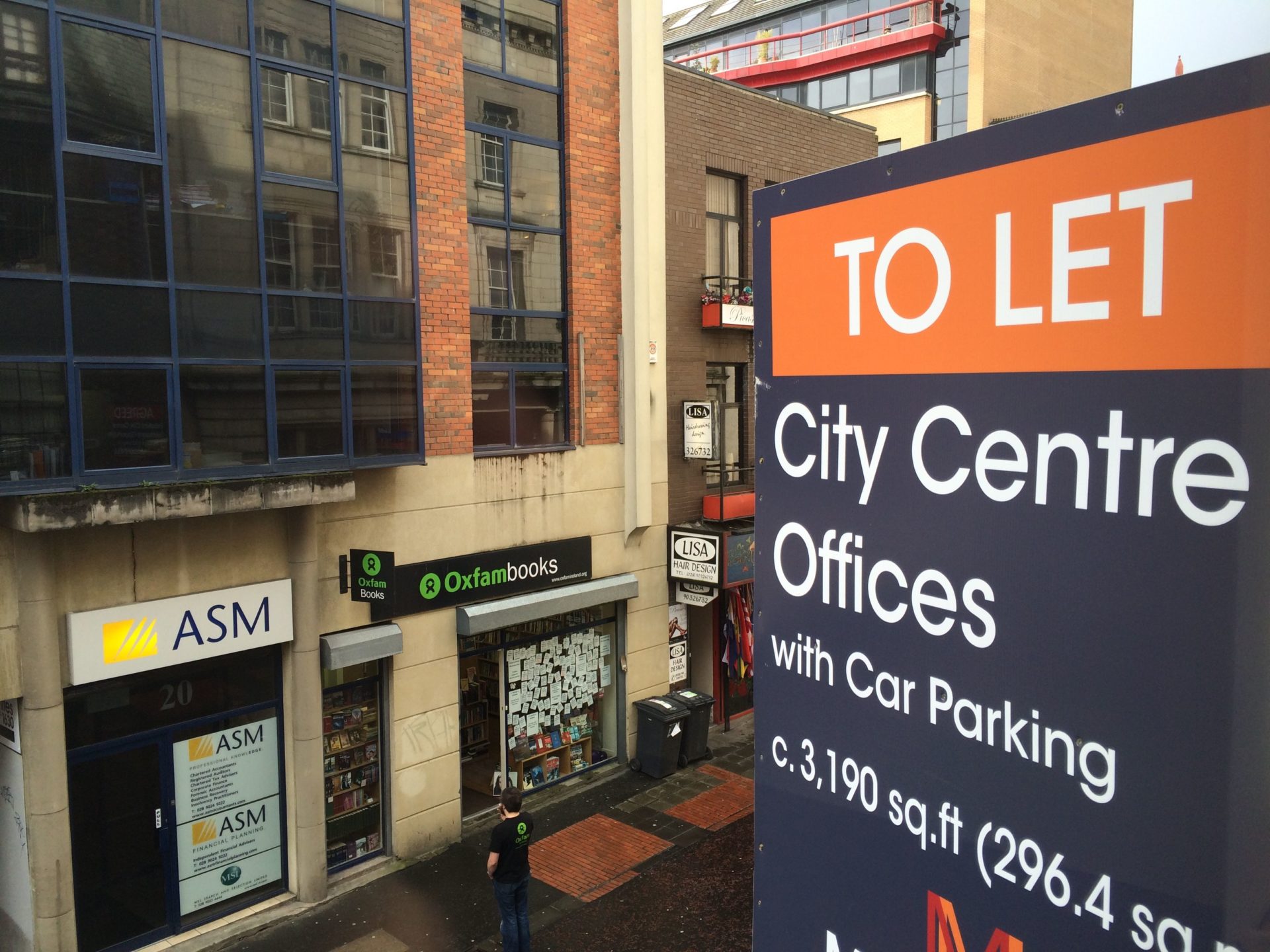 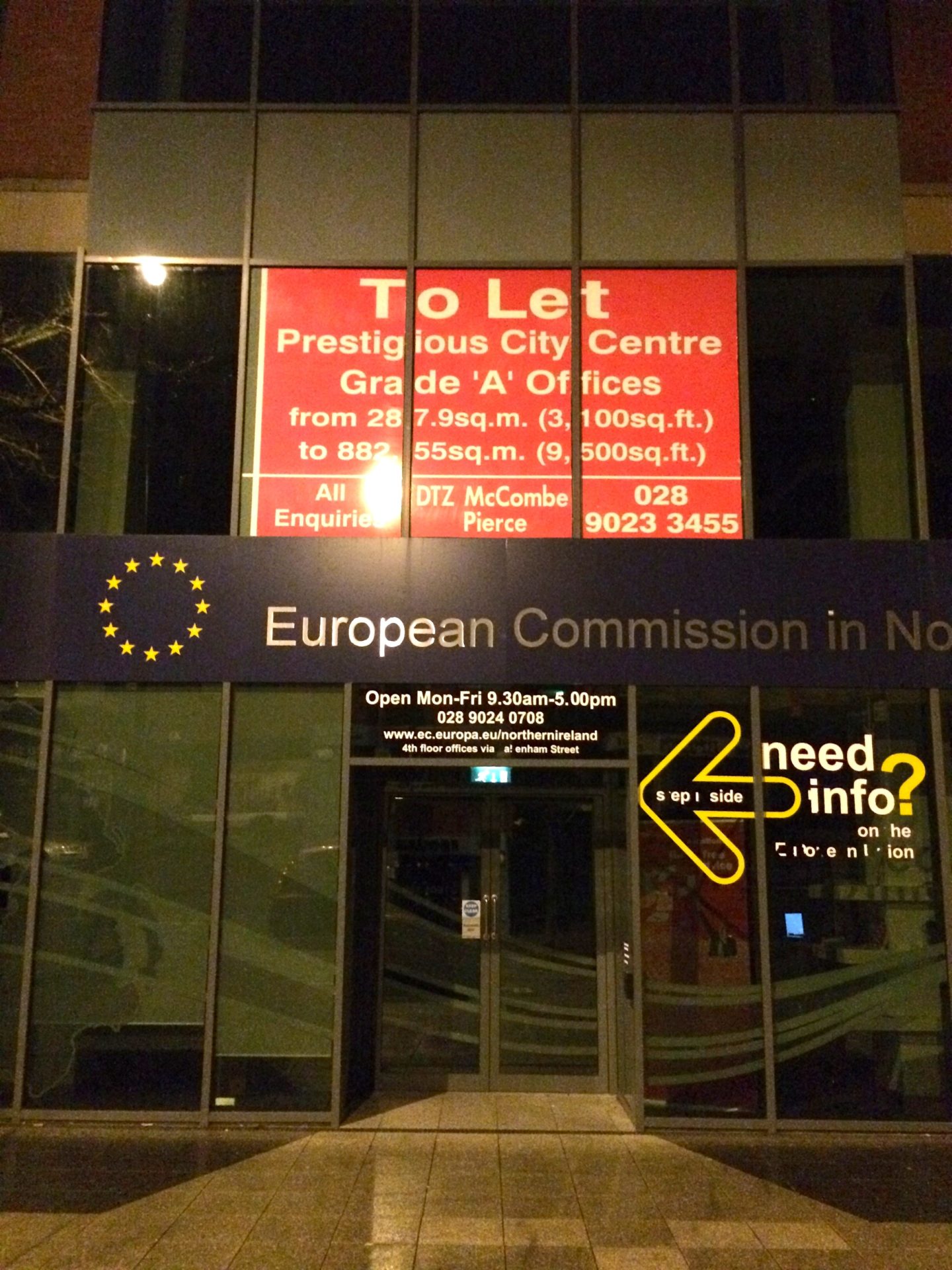 Troubles
Northern Ireland’s ‘troubles’ aren’t as intense as in previous decades, but the ethno-nationalist (or is it tribal, or social-economic?) divide perseveres with highly segregated neighbourhoods, school systems and other spheres of life in Belfast. Walking around (on St. Patrick’s day) the areas where some of the most pronounced communities live showed impoverished urban environments highly charged with communal symbolism, and ‘peace lines‘ separating hostile communities. 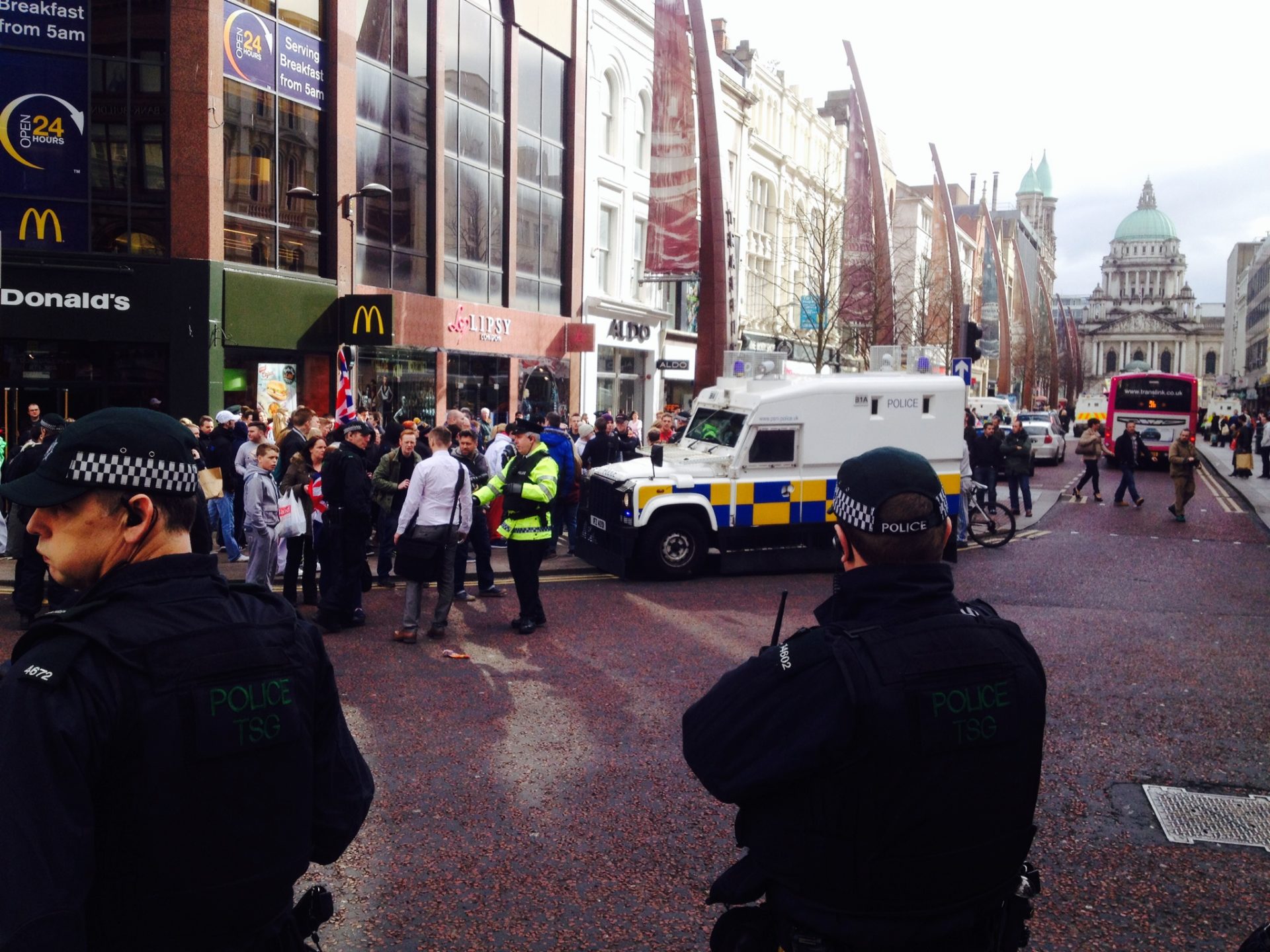 Central Belfast on St. Patrick’s day. There was green everywhere, as well as Irish tricolours, but also loyalist groups shouting, singing and waving UK flags. Police presence was stunning, with riot units all over the city and heavy escorts following the loyalist groups. 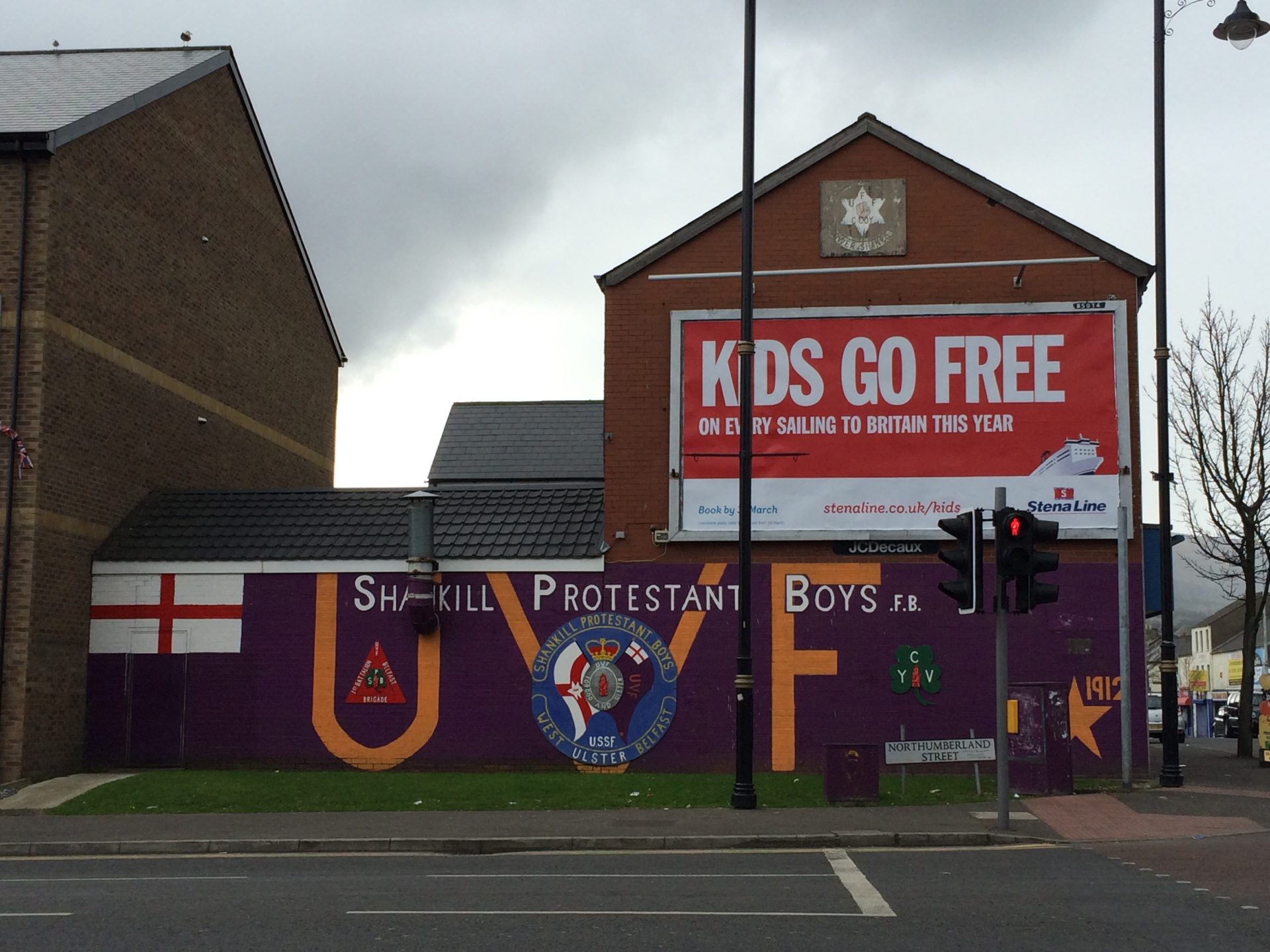 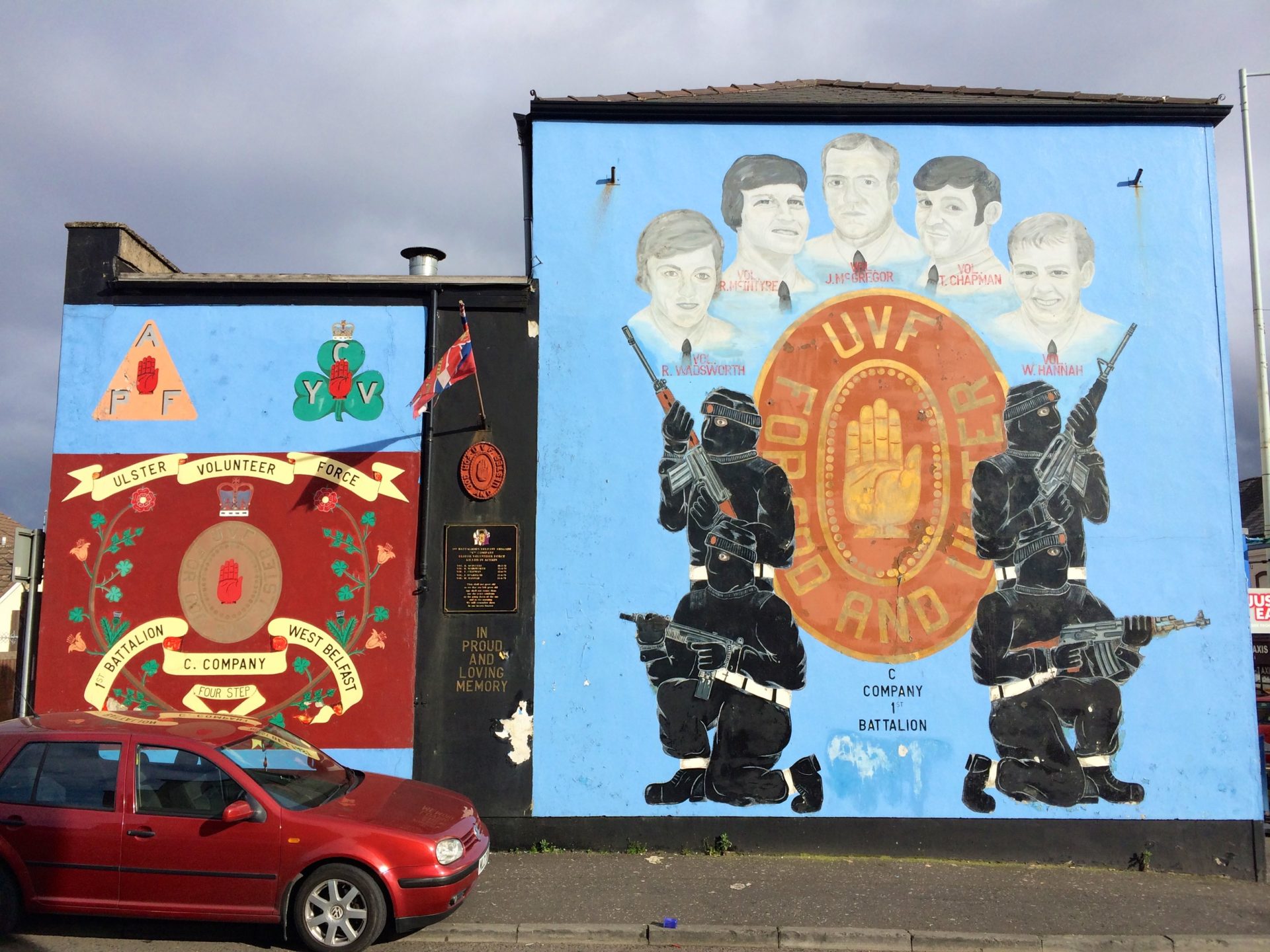 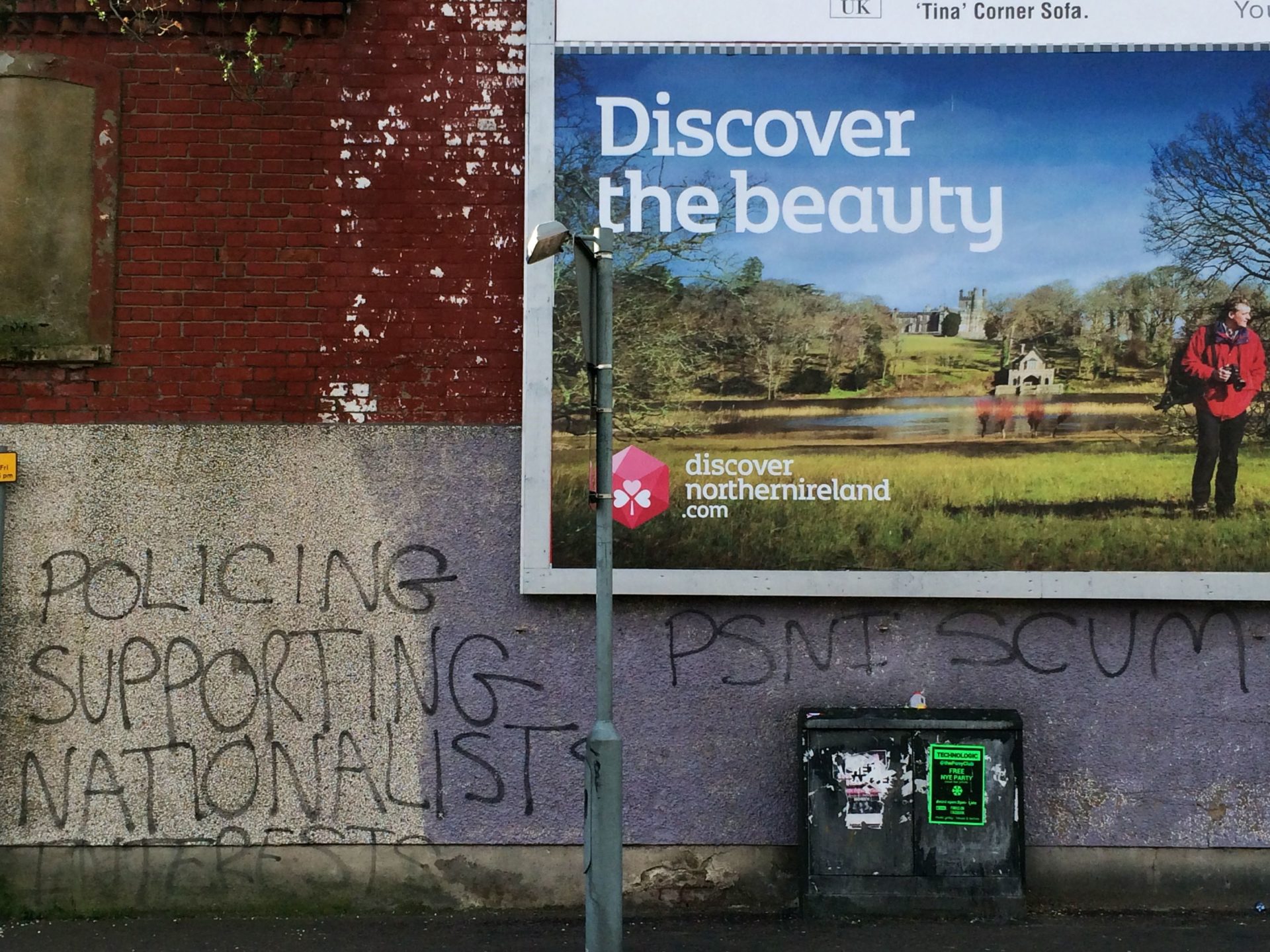 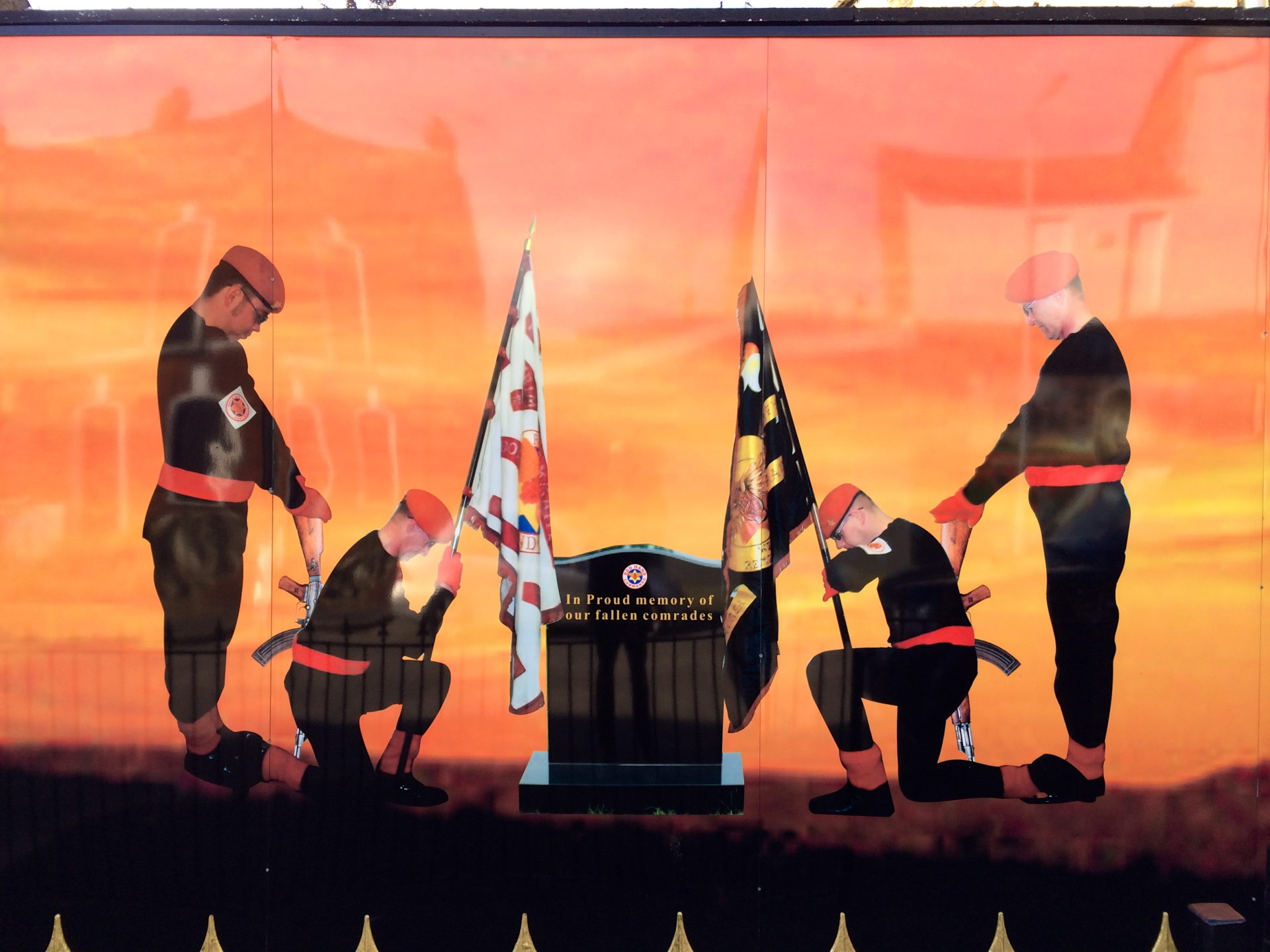 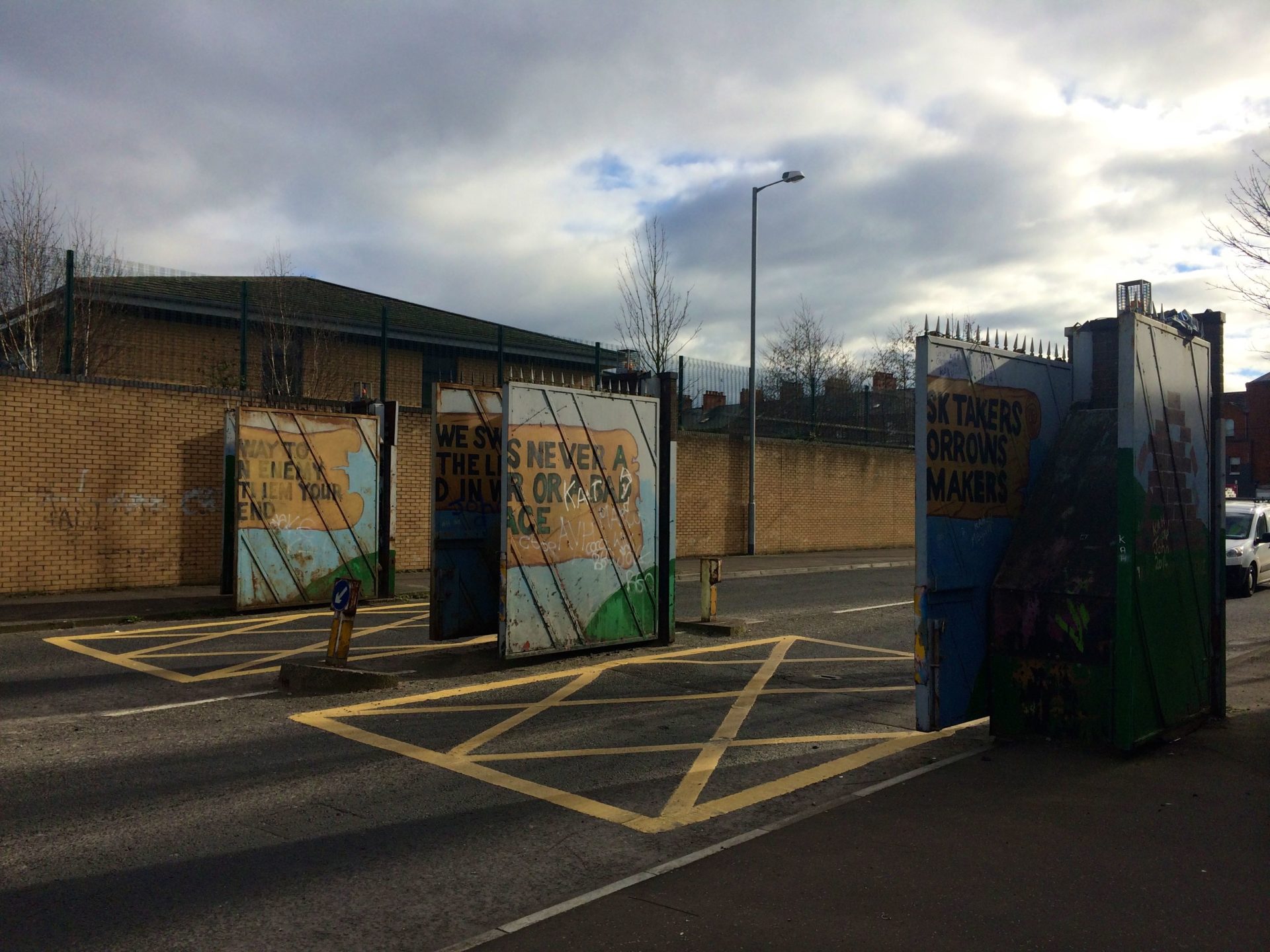 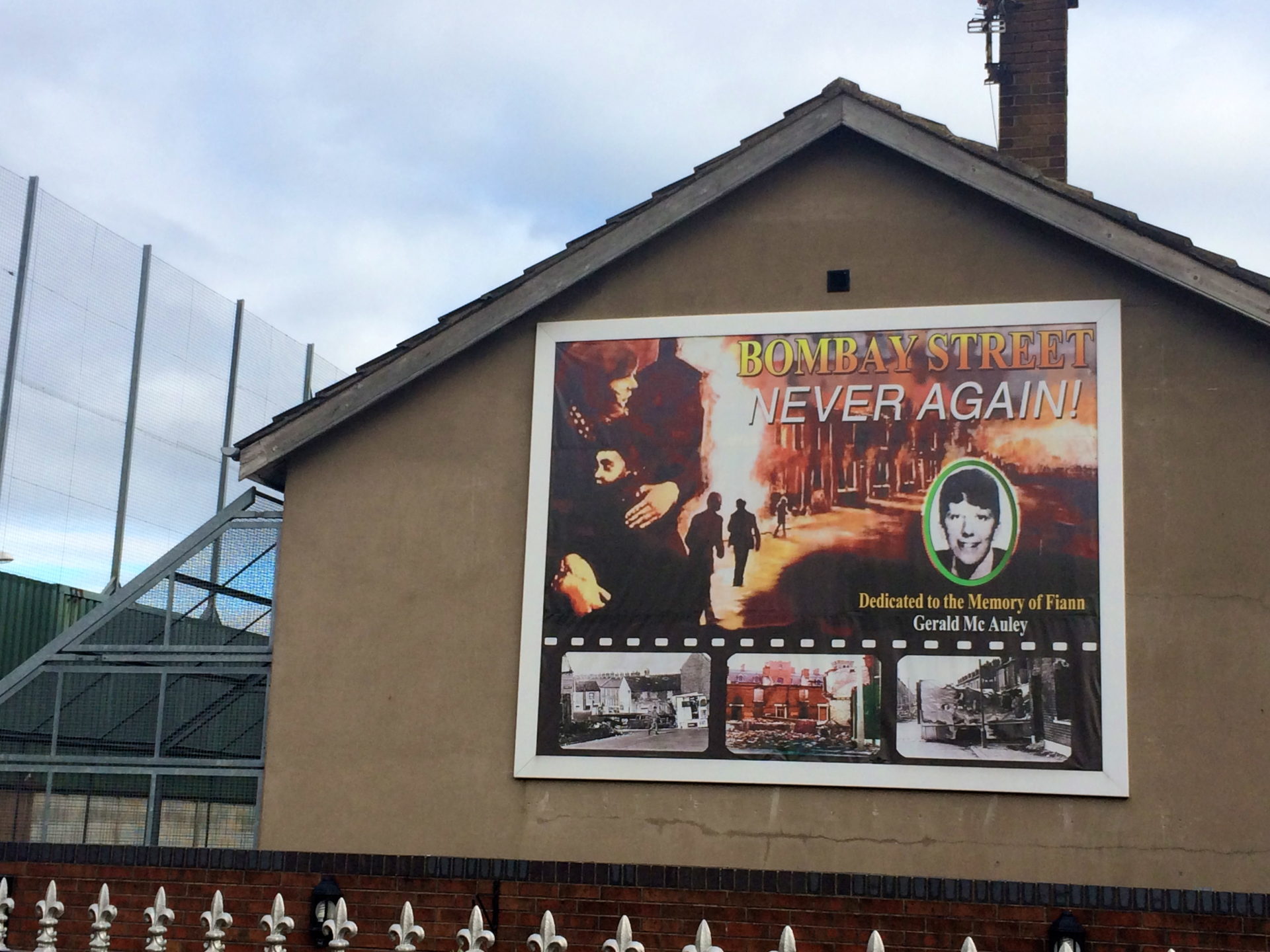 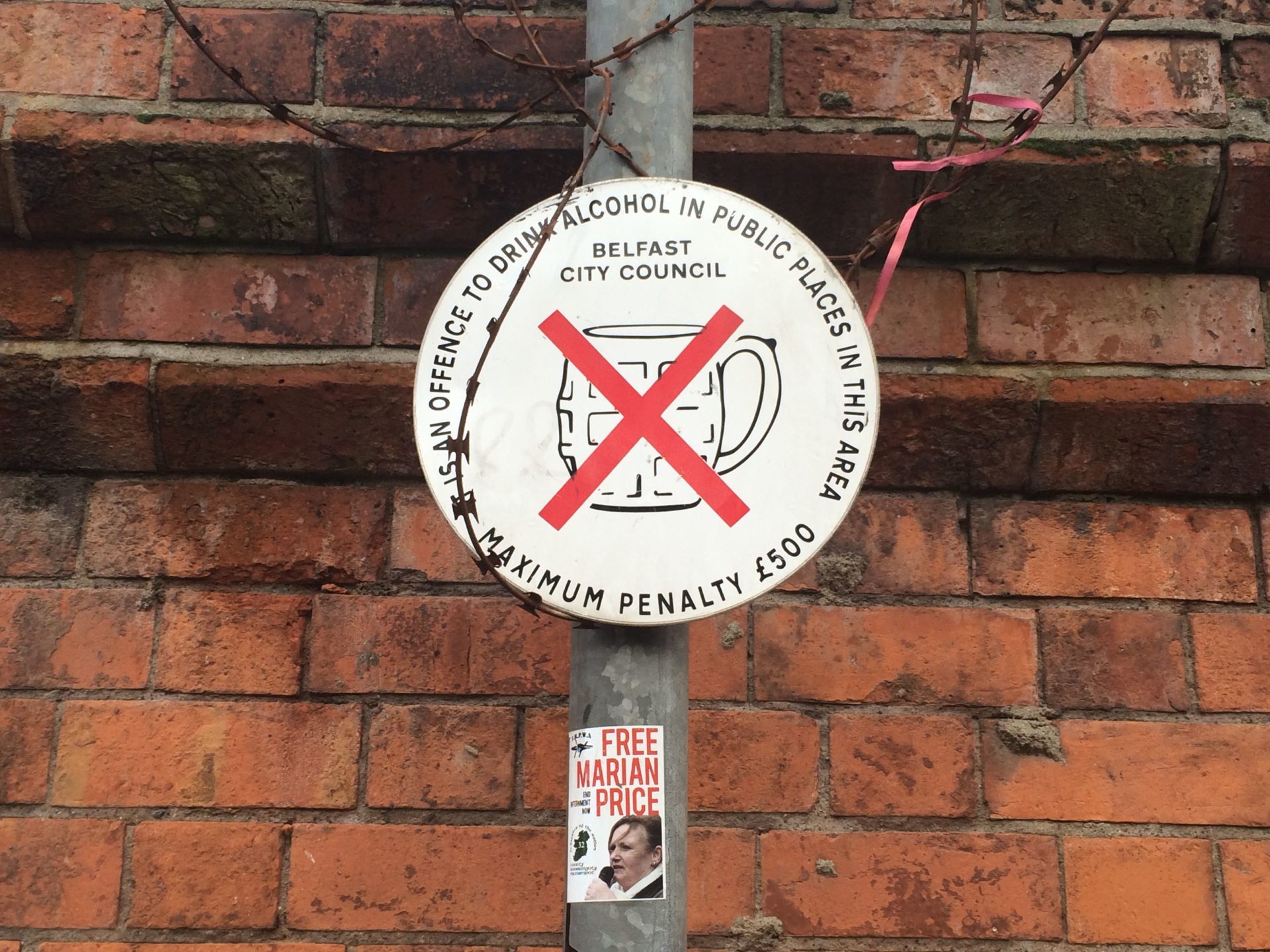 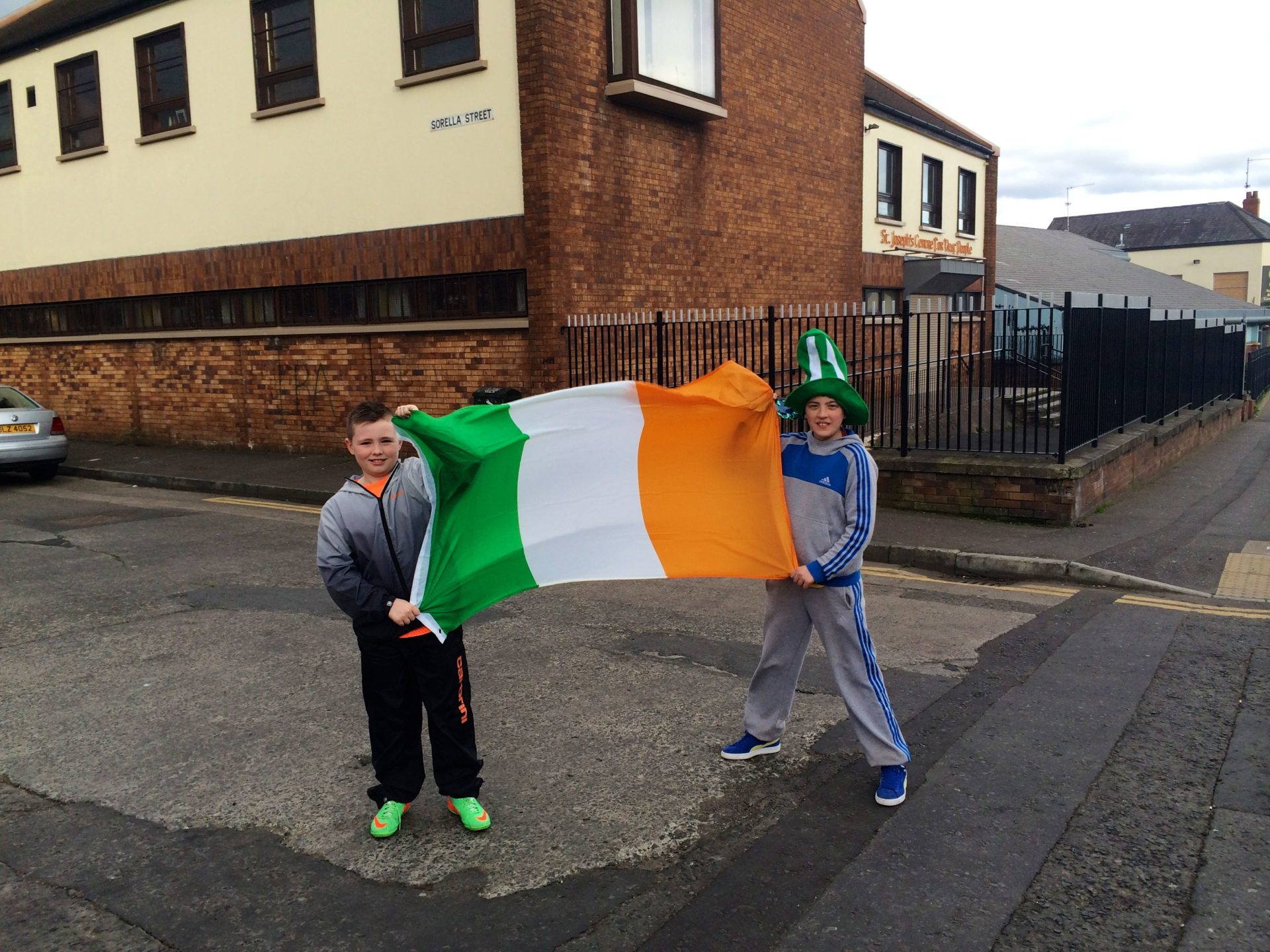 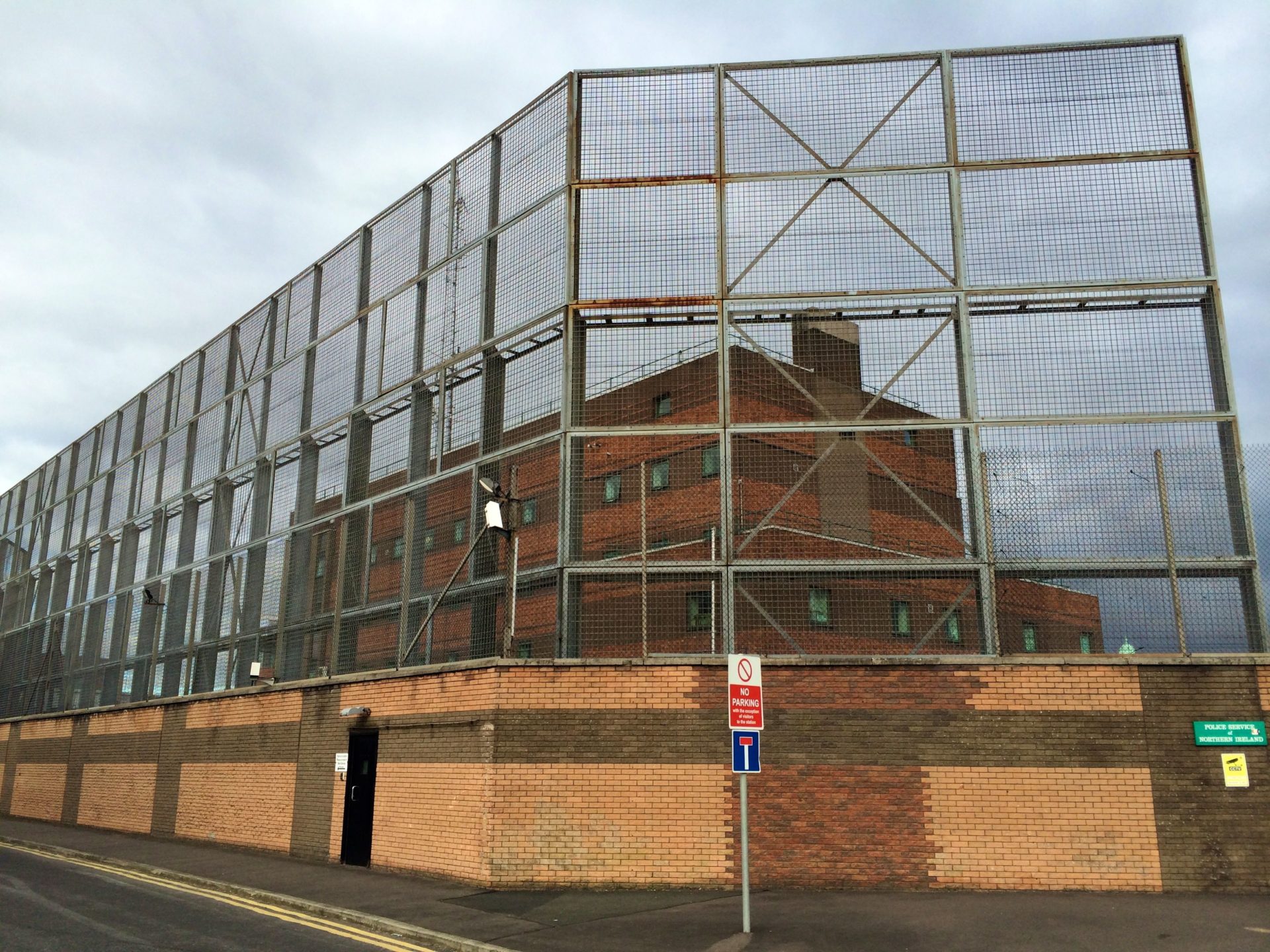 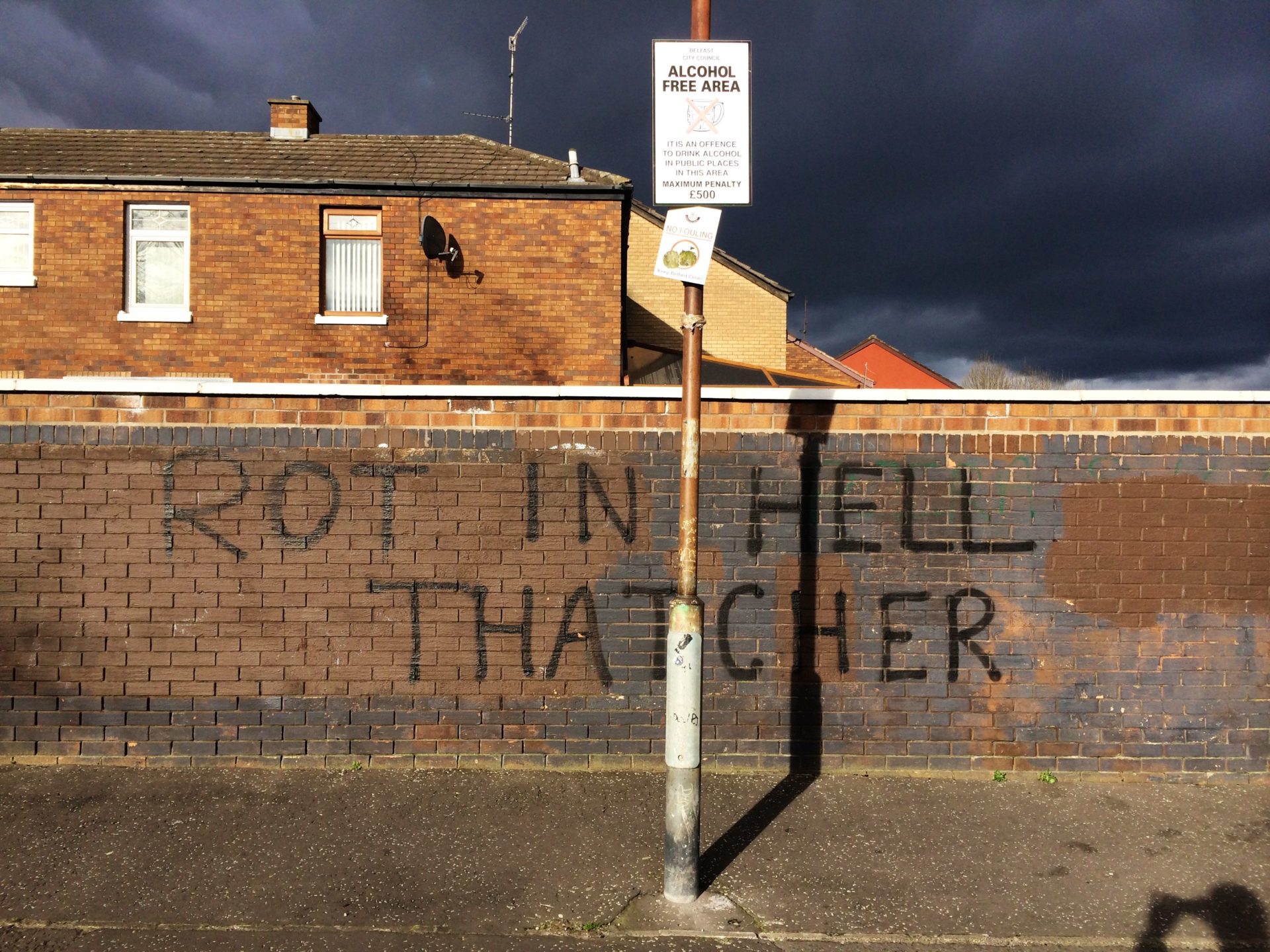 For more background information, we recommend the VICE documentary (below) in which VICE reports from Belfast during the hottest time of the year, the days around the July 12 loyalist marches. Both the comments underneath the video and the article show that the situation is extremely complex and difficult to analyse in a constructive way. Rory Hyde’s post about Belfast also provides valuable insights, mainly into the design aspects of the troubles.

We hope to return to Belfast for a research workshop, which will allow us to provide more in-depth analyses. Thanks to Kieran McConaghy for clarifying the situation in Northern Ireland to us.
Mark Minkjan
Mark Minkjan is an urban and architectural geographer. He is Editor-in-Chief at Failed Architecture and produces the Failed Architecture Podcast. He has written for publications including VICE, The Guardian and The Architectural Review. In 2016, Mark received a talent grant from the Dutch Creative Industries Fund to develop new forms of architecture criticism. He received the Geert Bekaert Award for architecture criticism in 2017 and curated the 2019 exhibition “The Right to Build: Self-build Between Dreams and Reality”. Mark currently teaches at Amsterdam's Academy of Architecture and Gerrit Rietveld Academy.
Michiel van Iersel
Michiel is an urbanist and curator working at the intersection of the arts, architecture and heritage. He studied arts and urbanism at the Erasmus University Rotterdam, the University of Amsterdam and Berlin’s Humboldt-Universitat. Michiel is co-founder of the Amsterdam-based interdisciplinary agency Non-fiction and started Failed Architecture in 2010.

add comment
Olix
important point on terminology to avoid confusion - the divided neighborhoods are not *unionist* and *loyalist* - those terms are actually synonyms for one side of the divide (also referred to as *Protestants*, though it's misleading to reduce this to a religious conflict). The other side is *nationalist* / *republican* / *Catholic* -- the group that historically wanted the entire island of Ireland to be a single political entity (nation) with no allegiances to Britain (though it is questionable whether this is necessarily the case today). Easy to mix up - but crucial to get the terminology right.
Related