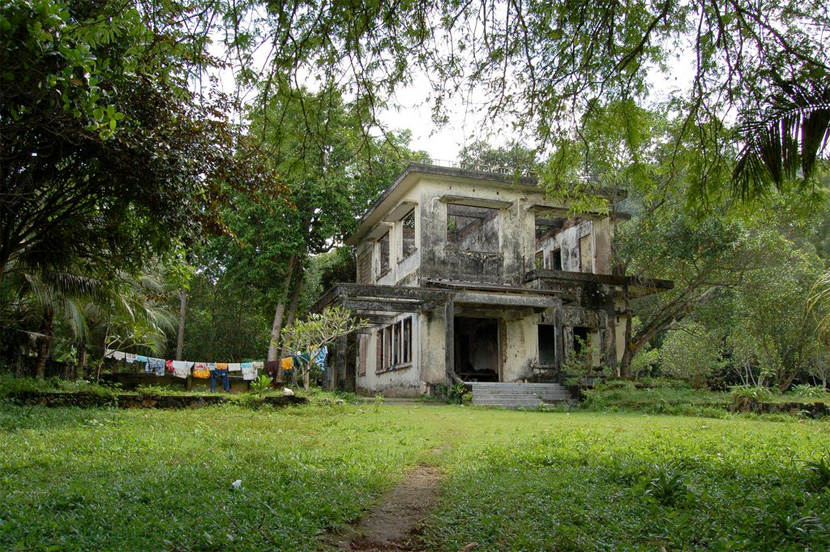 New Khmer Architecture, Cambodia's own modernism, ended abruptly with the rise of the Khmer Rouge, but its ruins can still be found on the Cambodian shore.

Established in 1908, Kep-sur-mer, as it was known during French occupation, sits 152 km south of Phnom Penh and 24 km west of the Vietnamese border overlooking the Gulf of Thailand. Less visited than its hedonistic neighbor Sihanoukville, and smaller than nearby Kampot, present-day Kep is an easy-going jungle-meets-ocean village. There is an aura about Kep that exudes relaxation; and perhaps this has always been its allure as a vacation destination of the past. Or, perhaps it is Kep’s past that makes the present day town so charming. Unique to Kep are its villas – modernist relics which number around 100 – abandoned, crumbling, overgrown and wild. Playful with their referencing of early modernism, one can easily spot the Bauhaus, Neutra and Corbusian influence; but unique to Kep, such influence has been blended with functional adaptations to Cambodia’s climate and traditional Angkorian heritage. Some of the villas are unmistakable to visitors, easily spotted along the singular main road that runs through the town, while others are more elusive, hiding amongst the vines and dense teak forest, perching upon the hillside.

The villas in Kep were constructed between 1953 and 1970. During this time, Cambodia experienced a golden age of architectural modernism backed wholly and aggressively by the late King Father Sihanouk who ruled Cambodia after the French seceded power. The movement was led by the Cambodian and ENSBA (Ecole Nationale Supérieure des Beaux-Arts, Paris) trained Vann Molyvann and lesser lauded Lu Ban Hap. The style, which blended elements of the modern movement with Cambodian tradition, came to be known as New Khmer Architecture. Tragically, the style came to an abrupt end in 1970 when the King was overthrown and the country was plunged into decades of war; first with its own Khmer Rouge and then Vietnam. Today, however, there is a reviving interest in this era (and the villas) and a call for preservation of the few structures that remain. As a younger generation of Cambodians begins to embrace and celebrate their recent past, they face a new war – that of foreign investment and development that often favors dollar signs and the wrecking ball over preservation and education. 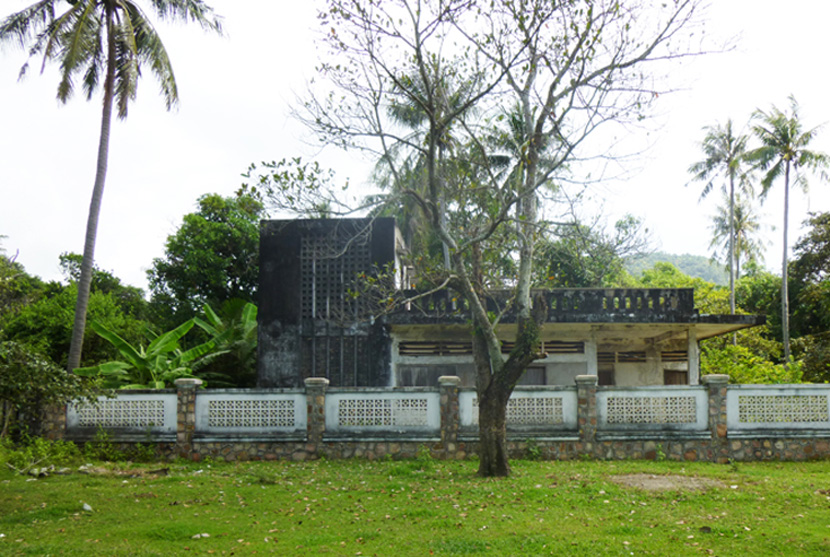 Kep was originally developed as a resort destination for the colonial French elite seeking respite from the heat of Phnom Penh. In the early years of the 20th century, town planning followed French de rigueur of the time and imported sand, wrought iron lamps, cobblestone streets, and a sweeping arched beach promenade provided a comfortingly familiar French seaside backdrop for the newly constructed colonial hillside mansions and tennis courts that began to line the coast. When Cambodia gained independence in 1953, the new King Sihanook continued this developmental trend, hailing Kep “the Saint-Tropez of the far east”, and the town enjoyed – for a brief period – a heyday of opulent, high rolling glamour. Both the Queen Monique and late King built summer villas in Kep. Catherine Deneuve was a visitor, and images of Cadillac filled beach parking lots and black tie casino parties, evoke, if anything, a nostalgic French Riviera opulence. During this time, Cambodian architects, artists and musicians also began to make Kep their home, or at least a locale where they would travel from Phnom Penh on the weekends to rub elbows with the rich. What began to develop in the town, at least in architectural terms, was a testing ground for the design and construction of experimental villas that were using French modernist design principals – particularly Le Corbusier’s – yet adapting them to suit Cambodian tradition and the tropical climate. New Khmer Architecture was born and manifested itself as a critical regionalist style that remains both spatially and temporally unique. 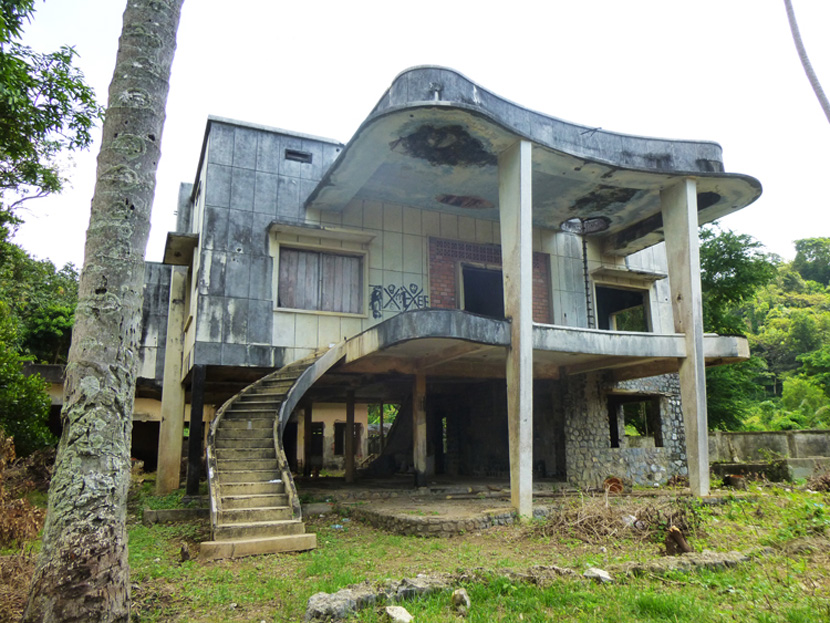 Vann Molyvann, born in 1926, is largely attributed as the leader of the movement. In 1945 he won a scholarship to study at the Ecole Nationale Supérieure des Beaux-Arts in Paris, where he received architectural training from students of Le Corbusier. Upon his return to Cambodia at the young age of 34, he was appointed the country’s Architect in Chief, while Lu Ban Hap (who also studied in Paris) was appointed Phnom Penh’s municipal architect and was placed in charge of urban planning and housing for the country. Together with King Sihanouk’s enthusiasm and massive plans for modernization, a construction wave swept Cambodia that strove to develop the country far ahead of its other South East Asian neighbors. Unfortunately, geopolitical forces saw this era as short lived. In 1970 Lon Nol led a military coup in the capital deposing King Sihanouk as ruler of the country. The King, away on business, remained in exile in China, and after a 5 year period of the authoritarian rule of the Khmer Republic, the Khmer Rouge (led by Pol Pot) took control of the country.  Until the Vietnamese captured Phnom Penh in 1979, the Khmer Rouge decimated their country through one of the worst genocides in modern history. Fortuitously, Vann Molyvann and Lu Ban Hap managed to escape Cambodia before the coup and fled to Paris. Without their personal record, almost nothing would remain of this architectural era. 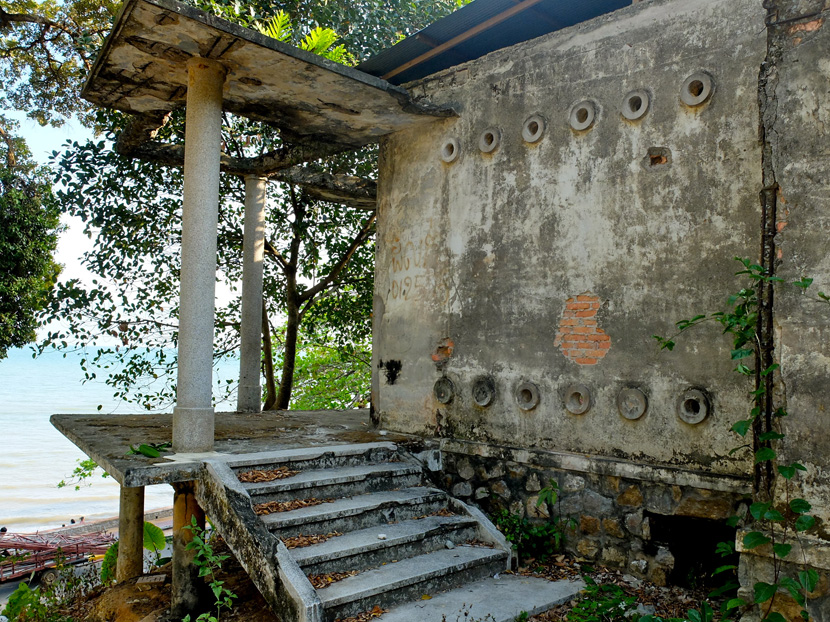 Rooted in a twisted Marxist doctrine, the Khmer Rouge sought a return to their ancient Angkorian roots, rejecting anything and everything modern. They believed that education was a luxury of the rich, and those who were even perceived to be educated were imprisoned and/or executed. This, of course, included architects and engineers. Kep – as a weekend and summer vacation town for the elite – embodied just what the Khmer Rouge were fighting against. When they gained control of the country and moved their forces into the town, those who chose to remain in their newly constructed villas were interned and/or killed while the villas were burned and looted; Kep was cleared out and forcibly abandoned. Only a few of the villas survived relatively intact (as they were occupied by the Khmer Rouge to be used as fish processing plants), but these were the exception. The majority were damaged or destroyed and left empty, only to be enveloped by the omnipresent, choking jungle. Through Cambodia’s decades of war and political instability, the architectural record of New Khmer Architecture was lost, and almost nothing remains of the history of the numerous villas. In Kep, the drawings, the villas, the clients, the architects and the engineers were all erased. Serge Remy, director of Vimana, an organization that aims to celebrate Cambodia’s (and particularly Kep’s) modernist history suggests there is perhaps a chance that many of the architectural documents reside in Hanoi. 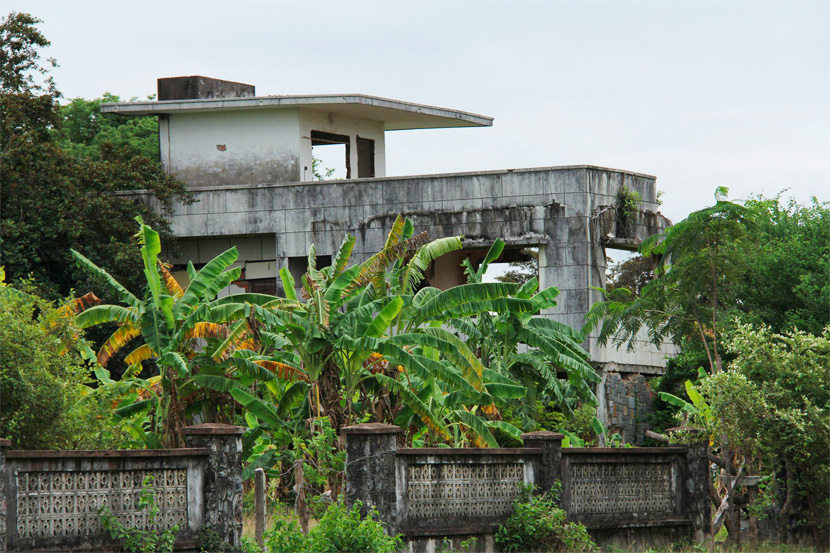 While Kep saw the New Khmer Architectural style manifested in residential design, many more well known examples exist elsewhere in the country. In Phnom Penh, Vann Molyvann’s Olympic Stadium, Teacher’s Training College (now the Foreign Language Institute), 100 Houses Project, and Chaktomuk Conference Hall are all striking examples of the contemporary regionalist approach. In Sihanoukville – 24 km to the west of Kep, one finds the SKD Brewery, National Bank of Cambodia and St. Michel’s Church. British architect Geoff Pyle originally came to Phnom Pehn to work on the interior of a friend’s restaurant, he now has an office in the capital and together with local architecture students and graduates, runs guided tours of some of the remaining notable buildings in Phnom Pehn. Sadly, many of them no longer exist. In 2008, two great examples of the style, the National Theatre and the Council of Ministers were demolished, and although the Olympic Stadium still stands, in 2001 the government sold it to a Taiwanese developer who altered the drainage system to the point that it frequently floods. In Cambodia, Vann Molyvann remains off the radar in the country’s school curriculum, while his international recognition remains low. The book “Building Cambodia: New Khmer Architecture 1953-1970” covers an extensive amount of projects and documents many of the buildings that have been demolished.

Back in Kep, the present-day remains of these villas are somewhat of a Bauhausian Angkor Wat. While some have crumbled completely, leaving only traces of foundations and rusted rebar peeking out through the foliage, others sit relatively intact. With a little sense of adventurism one can wander around them freely. Each villa is unique, and showcases an individual architectural flair. Overlapping roof planes, sculptural entrance stairs, deco-like curves, piloti, and a multitude of differing angled pitched roofs and cantilevers causing zig-zagging spatial overlaps, make the villas in Kep a collection of residential experiments that predates Eisenman’s houses or Tschumi’s Parc de la Villette. Two Belgians, Jeff Moons and Boris Vervoordt, purchased Knai Bang Chatt – a complex of three villas in 2006. Originally built between 1962 and 1965 the ‘Blue Villa’ belonged to the governor of Kep, the ‘Grey Villa’ a relative of King Sihanook, and the ‘Red Villa’ the Head of Customs. French architect Francoise Lavielle helped restore the villas, adding an additional ‘Brown Villa’ and the property was reopened in 2006. In 2012 the property added a fifth villa in line with the New Khmer Architectural style to the collection. 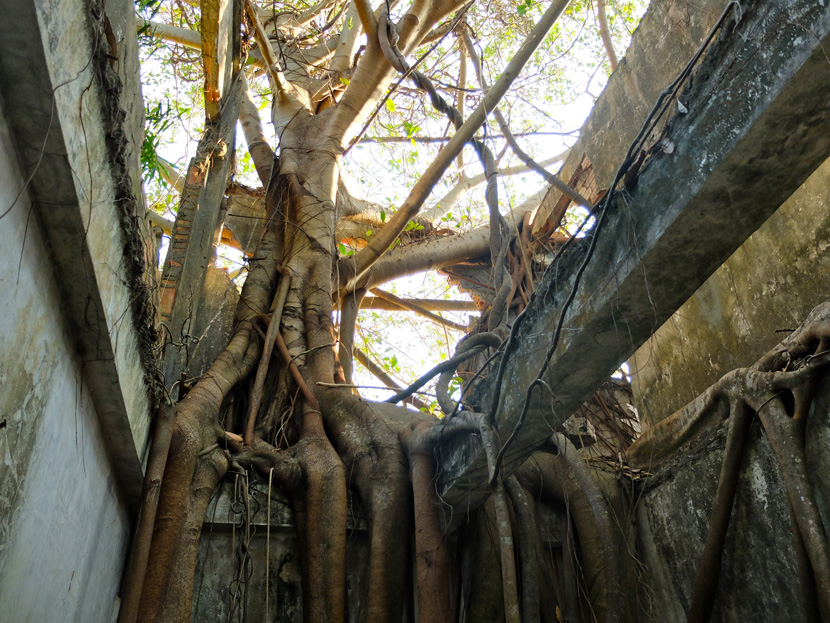 A stay at the restored villas, Villa Romonea or Knai Bang Chatt allows visitors a glimpse of what was and could have been in Kep. Villa Romonea was designed for Madame Nhiem, the wife of one of Cambodia’s most successful pharmacists in the 1960’s and a friend of architect Lu Ban Hap. Nhiem convinced Lu Ban Hap to design the villa for her in 1968, and despite the growing presence of the Khmer Rouge in the area, pressed on with construction into the early 70’s. The villa was completed only eight months before the coup and was the last villa built before the Khmer Rouge took control of the country. When the coup did happen Nhiem’s children were reportedly sent to France, but both she and her husband chose to remain. Their villa was occupied by the army and used as a facility to gut and dry fish, and tragically, but unsurprisingly common, the Nhiem’s were executed. After sitting empty for many years, the villa was purchased in 2007 by British businessman Mark Carpenter, and after restoration and renovations, was opened as a hotel in 2010. 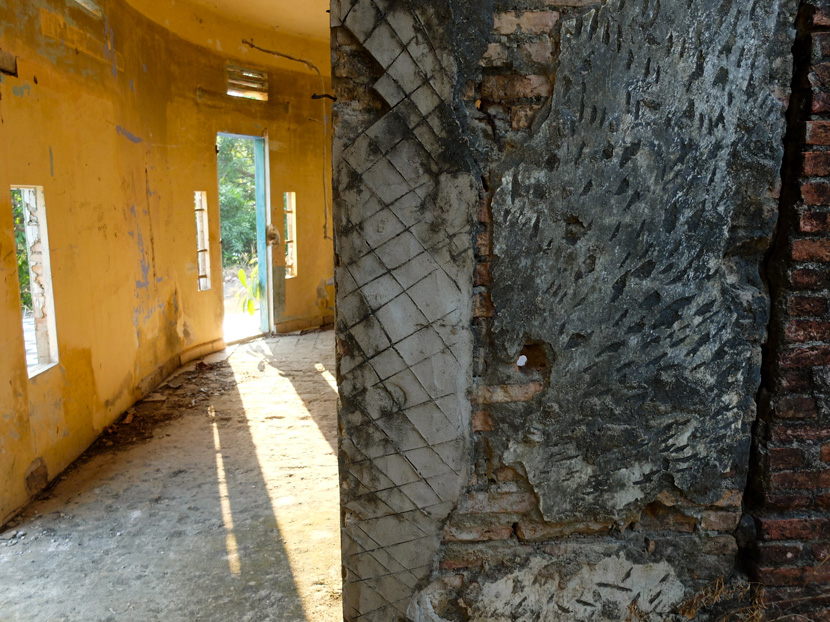 Presently, there exist several organizations working to preserve, remember and disseminate information regarding pre-Khmer Rouge Cambodian architecture. Because nearly all of the original drawings of the buildings built in the New Khmer Architectural style have been lost, the Vann Molyvann Project led by American architect Bill Greaves and supported by volunteers is working to re-create them from scratch. In Kep, Vimana has recently organized ‘KepExpo’, a travelling exhibition that documents the town’s modernist past and runs workshops to imagine its future. It is scheduled to travel to Paris, Singapore and Phnom Penh by the end of 2014. Sadly, time is not on Kep’s side. As foreign investment moves in, the villas are quickly being replaced by tacky and soulless package tour resorts. For now, however, the abandoned villas that do remain are an off-the-beaten-path attraction and an Orwellian prophecy come to life. In post-Marxist Cambodia, the villas of Kep play host to a new class of ruling elite: cows, goats and chickens. 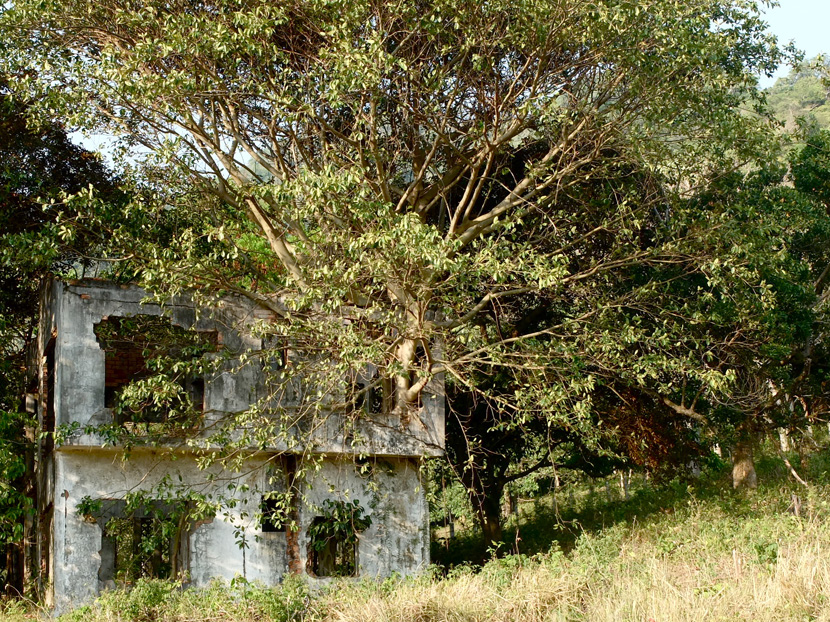 Once a Colonial Hotel, Now an Inhabited Ruin