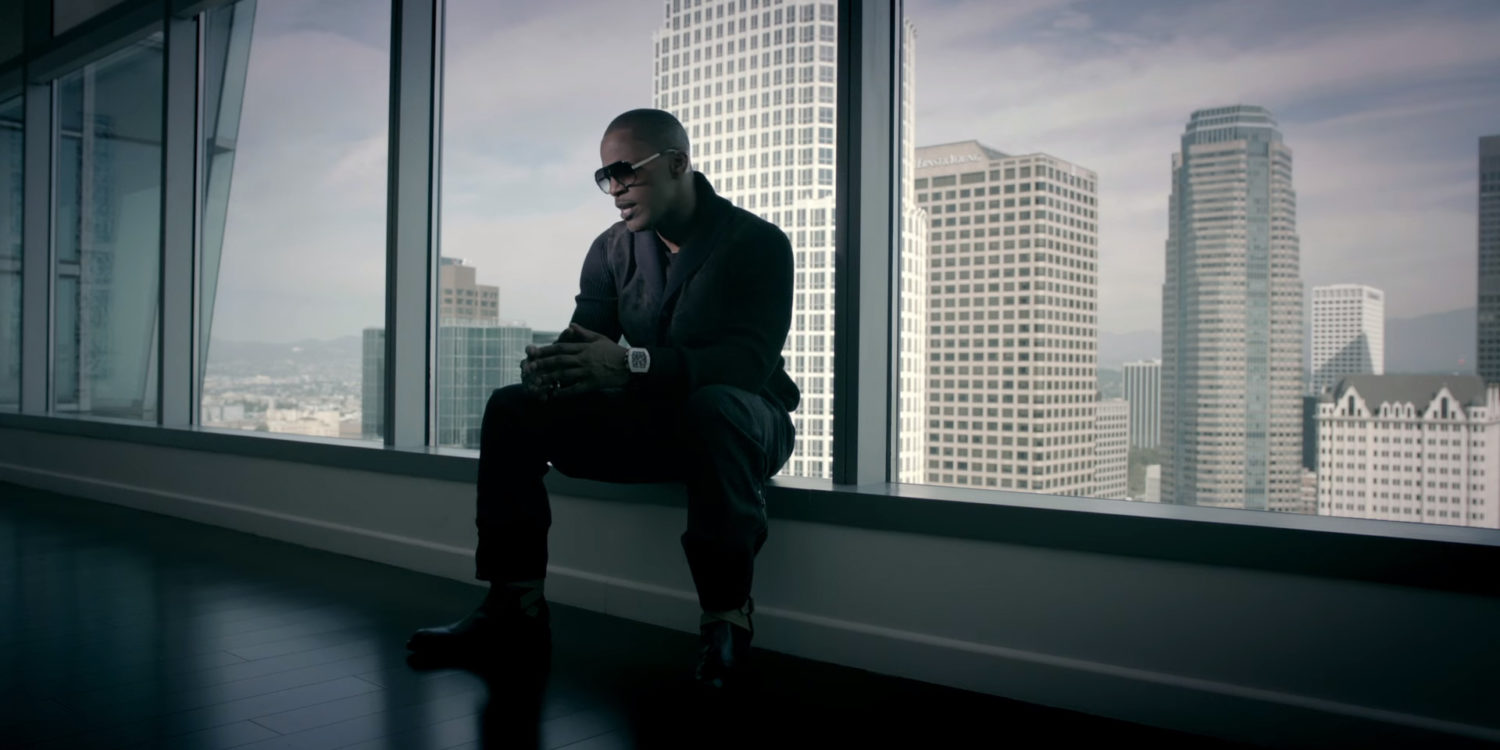 Jamie Foxx’s video for 'Fall for Your Type' is a remarkably accurate modern portrayal of De Certeau's godlike voyeur, showing this once omnipotent rich guy penthouse dweller in freefall.

In his video for “Fall for Your Type”, Jamie Foxx performs his musical lament amid an impressive architectural backdrop: an expensive penthouse overlooking the LA skyline. To illustrate the theme of the song, throughout the clip the video cuts between the action and a shot of Foxx falling from the penthouse window. Leaving aside the clunky metaphor, there is quite a lot to say about this video.

In his position, at the summit of LA’s downtown, Foxx restages the scene that Michel de Certeau sets in his essay “Walking in the City”. Like De Certeau, who begins the essay from his vantage point at the top of the first World Trade Center in New York, Foxx has placed himself out of the city’s grasp. He has become a godlike voyeur, never touching the ground, and able to read the world in its totality. But a closer look at this video reveals a remarkably concise portrayal of the contemporary poverty of this once mighty figure.

The clip begins with a besuited man falling through the air. Shattered glass suggests that he’s been pushed out of a window. The video then cuts between a morose Foxx sitting alone in a penthouse apartment and the LA skyline in twilight. The city is blurred, and shot in time lapse. Shortly after this, we discover that the apartment is in one of the towers in the aforementioned skyline. 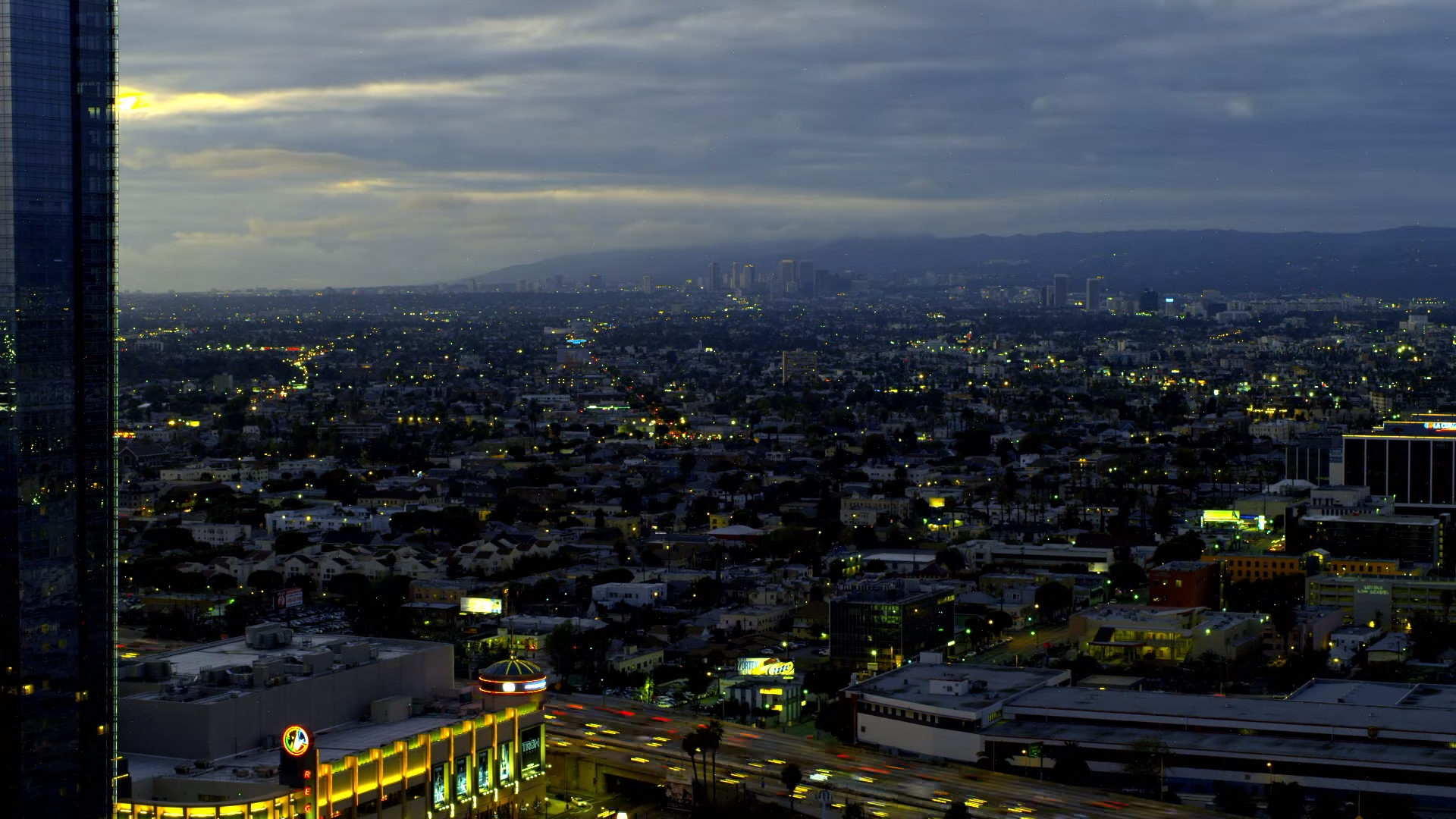 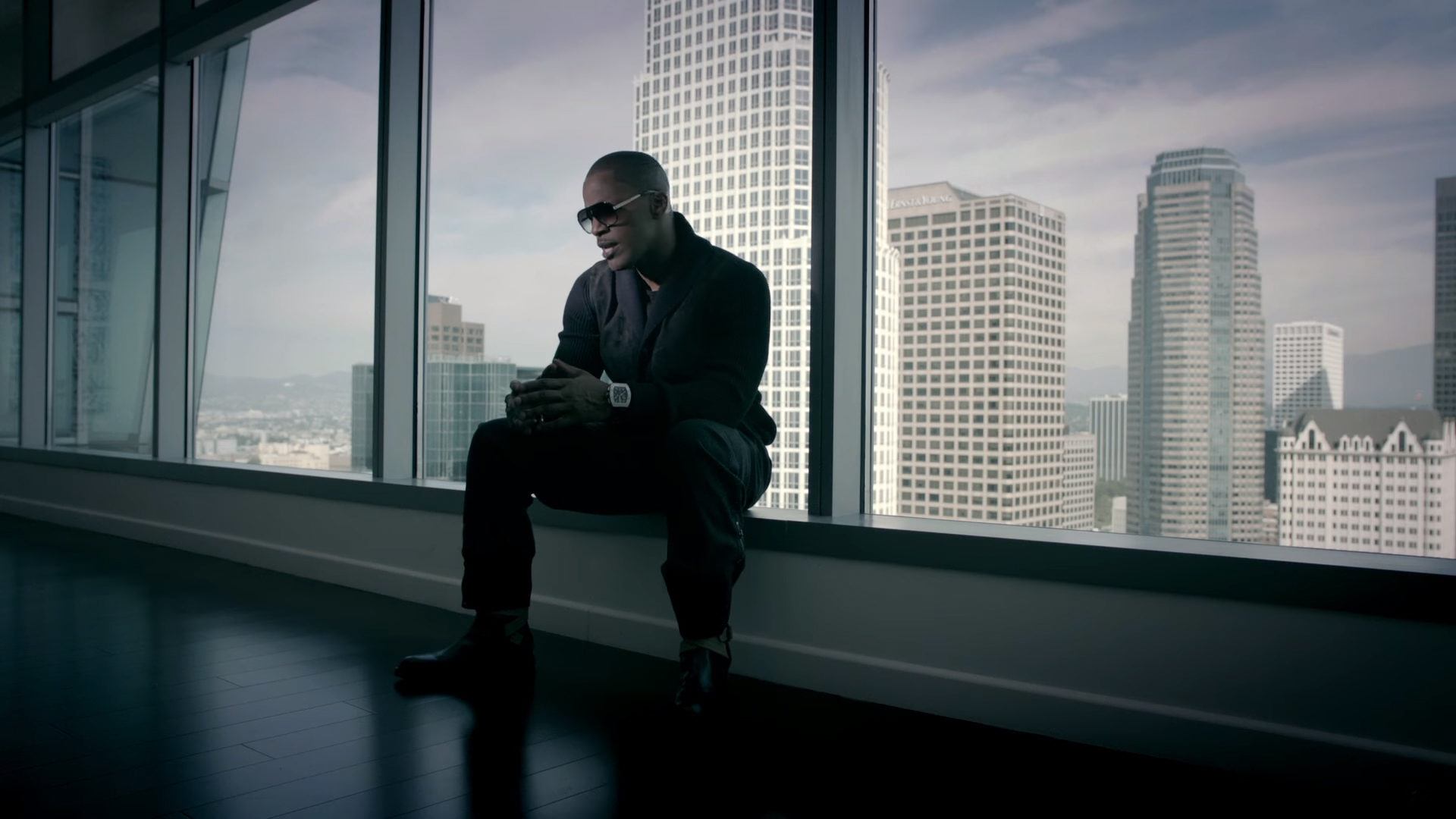 The video’s blurred, time-lapsed city brings to mind the 1995 film Heat. In a nice exchange, Heat’s director Michael Mann himself drew upon a visual repertoire first employed in music videos, particularly in his use of new camera technology which gave an ultra-shallow depth of focus: blurring everything in the shot except the objects or figures in the very foreground.

Mann used this camera focus because it was stylish, but the choice was also implicitly ideological: having just the characters in focus, and obscuring the city in which the action takes place, ensures that this is a film all about individuals. In Heat, the protagonists could be anywhere. 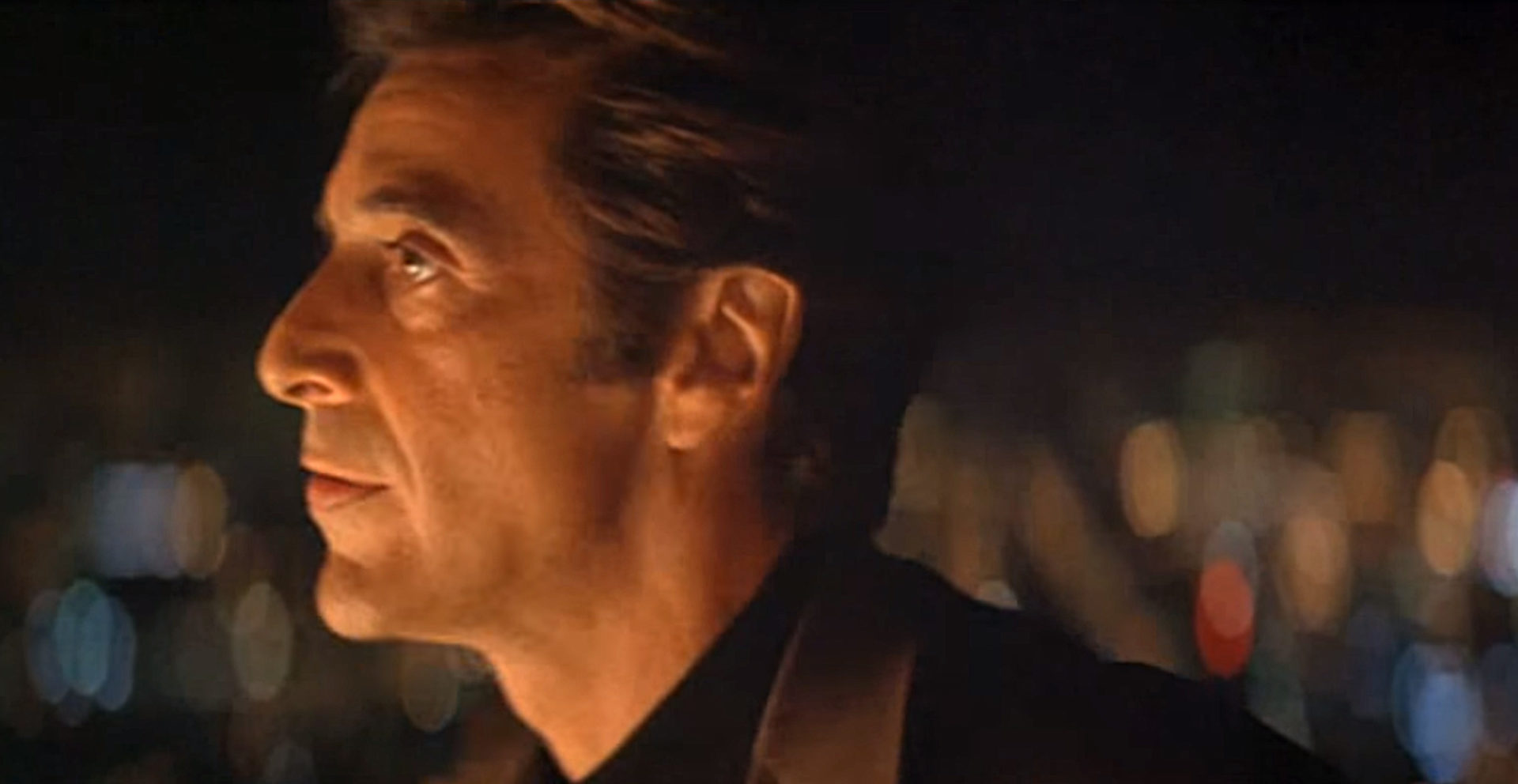 Writer Mark Fisher described Heat’s LA setting as a world of “polished chrome and interchangeable designer kitchens, of featureless freeways and late-night diners, a no-place that is very far from being a utopia.” The main character, Fisher points out, is called “Neil MacAulay”, an “anonymous name, a fake passport name, a name that carries no culture freight, that is bereft of history, as unrevealing as a forced smile”, a far cry from the residual old European familial structures which dominated earlier gangster movies.

“Fall for Your Type” similarly robs Foxx of any connection to the world. The entire action occurs in the same kind of expensive but conspicuously bland and anonymous interiors. And going even further than Heat, the entire clip takes place in the sky. This detachment has always been the essential underlying reality of such architecture, but besides Heat, the clip also calls to mind three equally important references, each of which capture three key stages of an era that has truly elevated the godlike voyeur to its apotheosis.

Firstly, it parallels Robert Longo’s “Men in the Cities” paintings. There are few better images of the yuppie culture that emerged in the 1980s than Longo’s paintings, with their stark depiction of anonymous, writhing men and women in smart dress set against a blank background. There are a bunch of ways to interpret these images, but one of their more obvious intentions is to capture the same sense of ownership over the world as Michael Mann’s camera effects, while also evoking the inherent convulsions brought about by such a dramatic focus on the self. 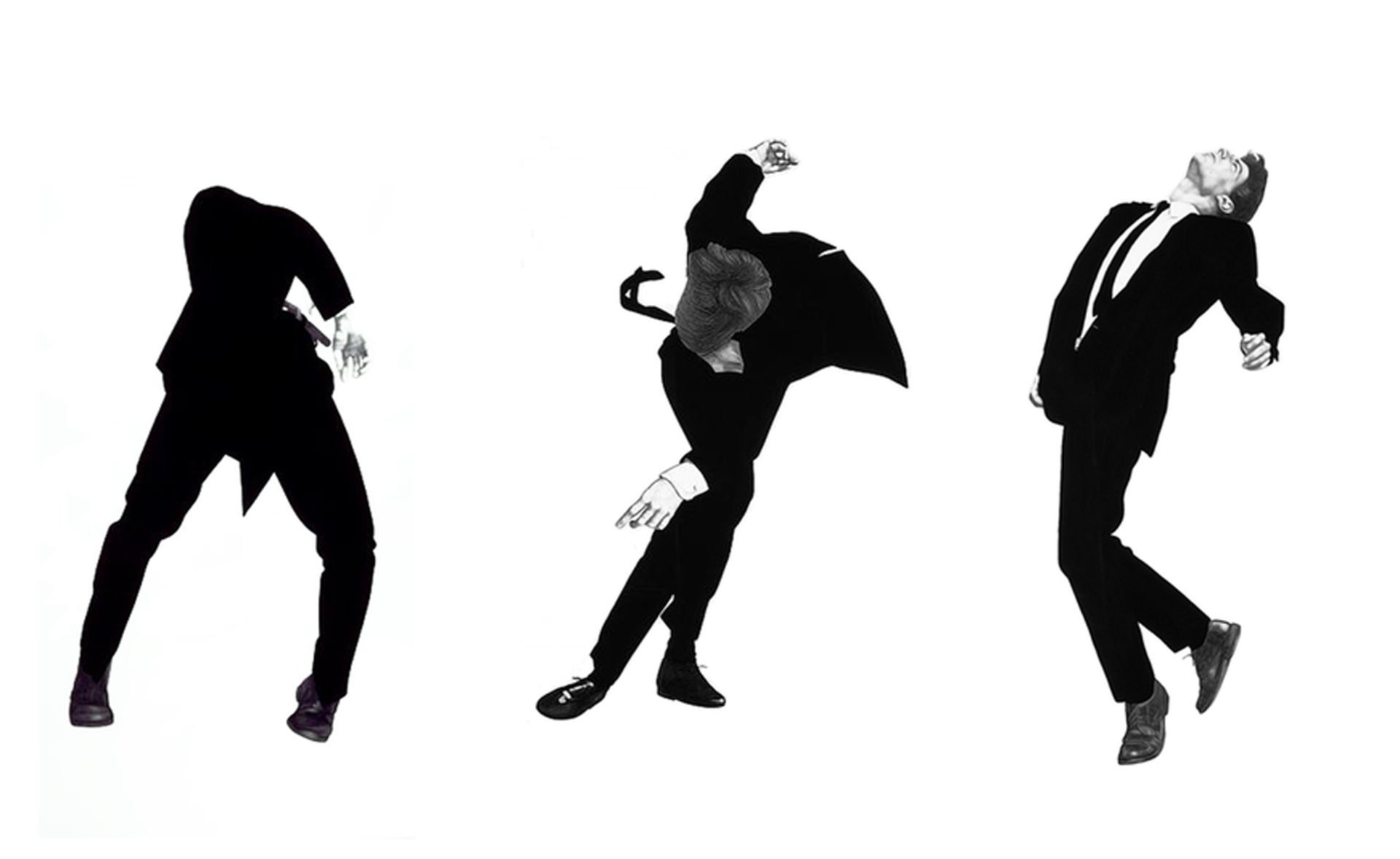 Secondly, and perhaps more explicitly, it echoes the haunting image of the person who jumped from the World Trade Center. The so-called “falling man” photograph was famously censored. The reason for this is speculated to be due to it obscuring the official narrative of triumph over adversity. Considering the global financial crash that Wall Street brought about just seven years later, this image seems ripe for reinsertion into the official history, serving as a terrifying image of high finance coming back down to earth. 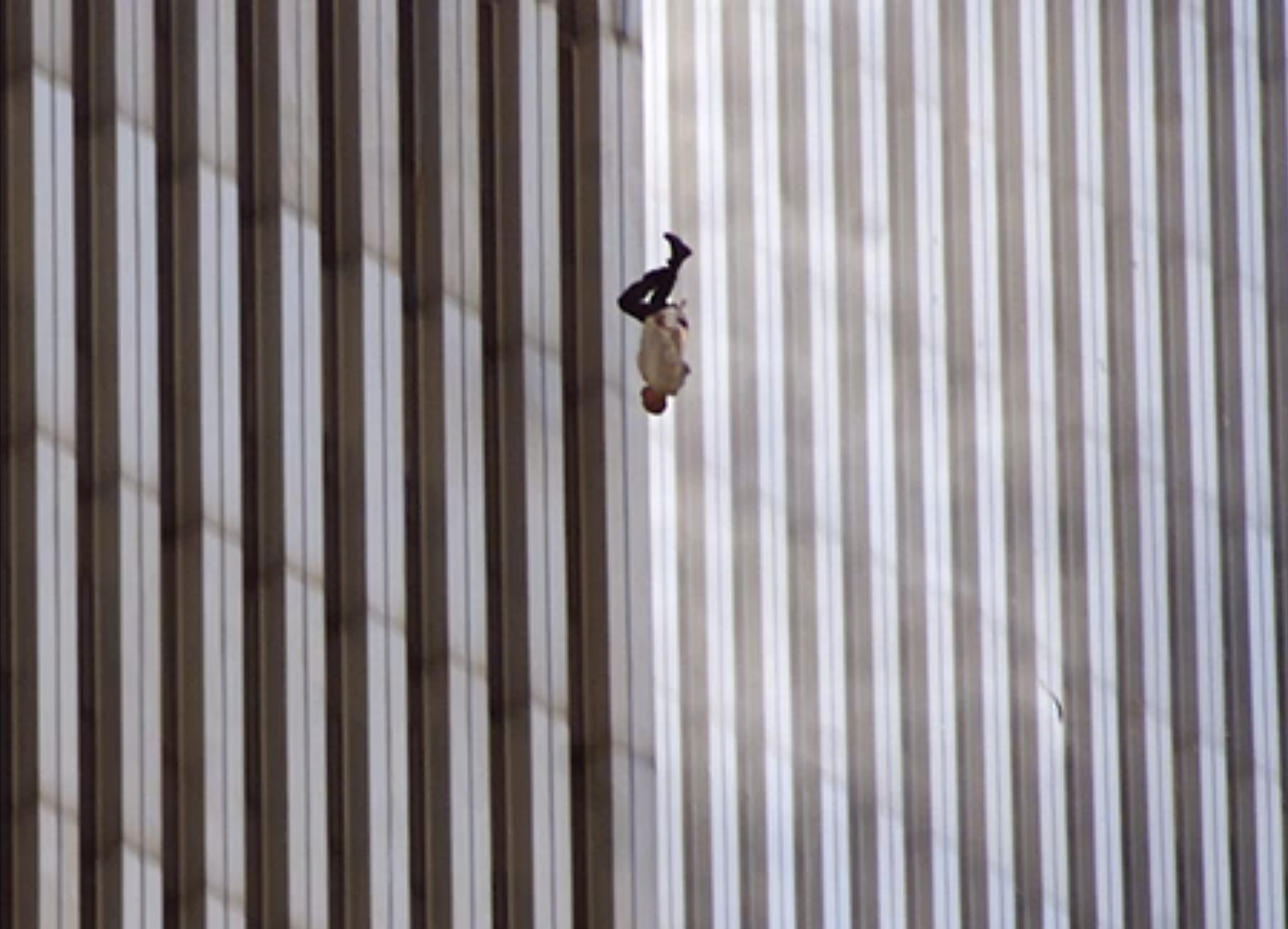 Finally, it also bears a lot of similarities to an advert that property developer Redrow produced for a set of luxury apartments in central London. This advert received considerable criticism when it was posted, and you can see why. It is pure American Psycho (incidentally, one of Longo’s paintings appears in the protagonist Patrick Bateman’s own penthouse apartment in the film adaptation), with its central character a British Bateman. Indeed, it’s so brazen in its celebration of greed, so shot through with libidinal energy, and so slick and empty as to come across as just as much of a parody as American Psycho. Except a property developer can’t really parody. They are culpable in the thing that they’re parodying. The advert comes with narration:

They say nothing comes easy, and looking back, it’s hard to disagree: the mornings that felt like night, the days that melted into months, and years, the missed opportunities, the doubts, the need to be different, to define yourself, to be more than individual, to stay true to what you believe, [to] make the impossible, possible… to rise and rise… Yes, they say nothing comes easy, but if it was easy it wouldn’t feel as good… to look up at the city that could’ve swallowed you whole, and say “I did this”.

To bring things back, these three references roughly sketch the history of the godlike voyeur as he has been represented in the late capitalist period (a period starting from around the mid-70s onwards). Longo shows him at his height, slick, new and writhing in triumph; the falling man depicts him at his point of death, about to hit the ground with an almighty thump; and the Redrow advert shows him in his zombie-like persistence into our contemporary moment, stumbling on, even making perverse fun of himself, and still meekly claiming Promethean dominance over the world he’s looking down on.

Foxx’s video concentrates this entire forty-year history into three minutes, all of which takes place in the same architectural backdrop: a penthouse in a high-rise, plate and glass tower in LA’s downtown. Is there any better single piece of architecture to express this history? Sure, perhaps we’d be better off in New York or London, but there is something exceedingly empty, and distinctly nowhere about this particular image of LA, a fact that is well portrayed in the aforementioned Heat (a key reason for bringing it up in the first place), as well as in the music video itself.

Either way, not content with simply encapsulating the forty-year history, the action in the video extends the story further. Sat in his LA penthouse, Foxx is just as capable of performing the role assigned to the British Bateman in his London penthouse, of comically “doing” the city. And for a moment at the beginning of the video, as he looks straight into the camera, it looks like he just might. But he’s got more important matters to attend to. Instead, the subsequent action presents Foxx’s penthouse lifestyle as overwhelmingly sad and unfulfilled.

And it is Foxx’s lack of confidence which makes this video all the better for pointing out the contemporary poverty of the totalizing eye De Certeau described. The myth of the infallible godlike voyeur is unravelling.

At the beginning of the late capitalist period, music videos, when they did address the super-rich penthouse lifestyle, were quite capable of making it look great, capturing the exhilaration of a boom in full effect. The very presence of a music video that makes this expensive lifestyle look so depressing—not to mention one that emphatically hammers the feeling home with a series of images echoing the history of this lifestyle—really makes for a compelling argument that this trope has exhausted itself.

Pointing to forms of painting which tried to imagine vantage points that no human eye could technologically achieve (yet), De Certeau underlines that “the desire to see the city from above preceded the means of achieving it”. The anti-climax of finally achieving this vantage point underlines what De Certeau maintained throughout the essay: that rather than trying to climb the tower, it’s much better to remain “down there”, among the chaos, unpredictability and sheer life of the streets. If only culture hadn’t taken so long to realise this, perhaps our inner cities wouldn’t be so unbelievably bland.

Why L.A. is Important