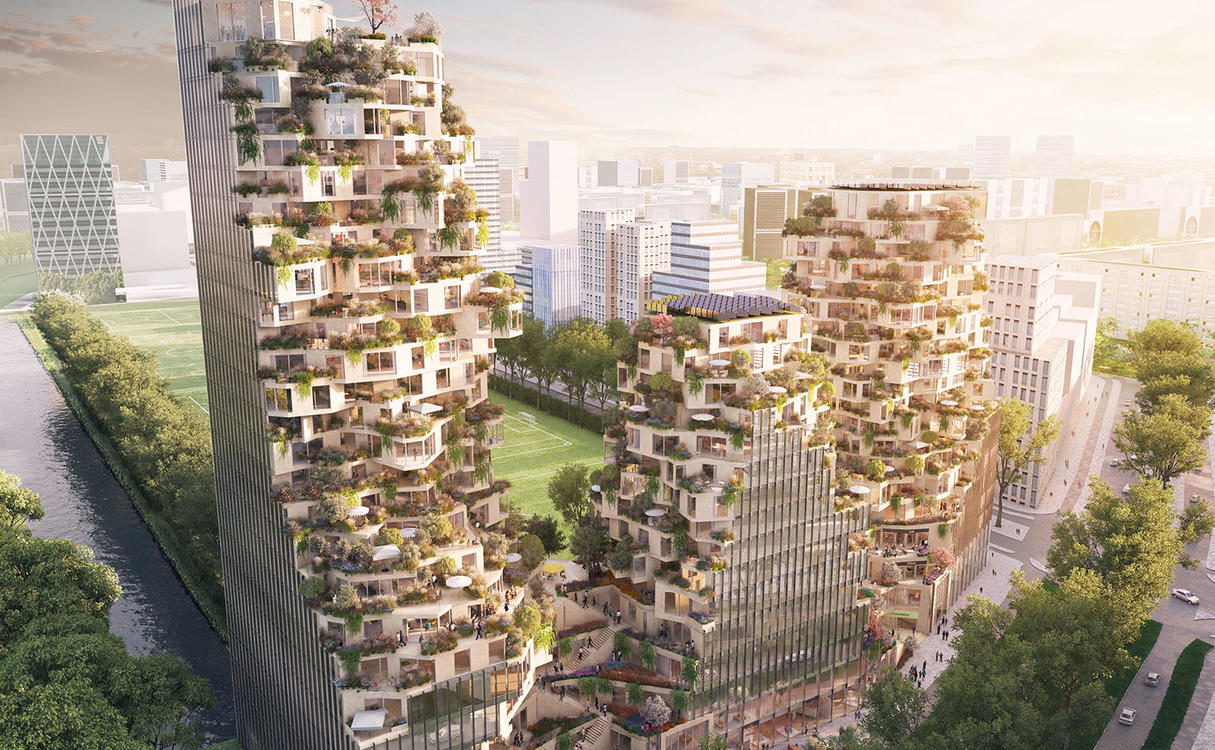 Digital visualisations and hollow sales pitches hide the ugly sides of architecture and urban development. And the media buy it. MVRDV's recently proposed Valley in Amsterdam is a good example.

In the near future a building designed by the world-famous architectural firm MVRDV will be constructed in Amsterdam. An inhabitable mountain cliff, covered in greenery. That is, if we are to believe the computer-generated image that was recently presented by the designers. In reality, though, the building will never turn out like the rendering.

The rendered building is a symptom. It illustrates how the media represent buildings, with unrealistic visuals and irrelevant writing. The press do little more than spread the visual candy produced by architecture and city planning’s slickest players.

Gaze on the pristine newness of exclusive architecture. In order not to distort this fantasy, the social implications, political dynamics and internal problems of architecture and spatial production are conveniently left out of the picture. 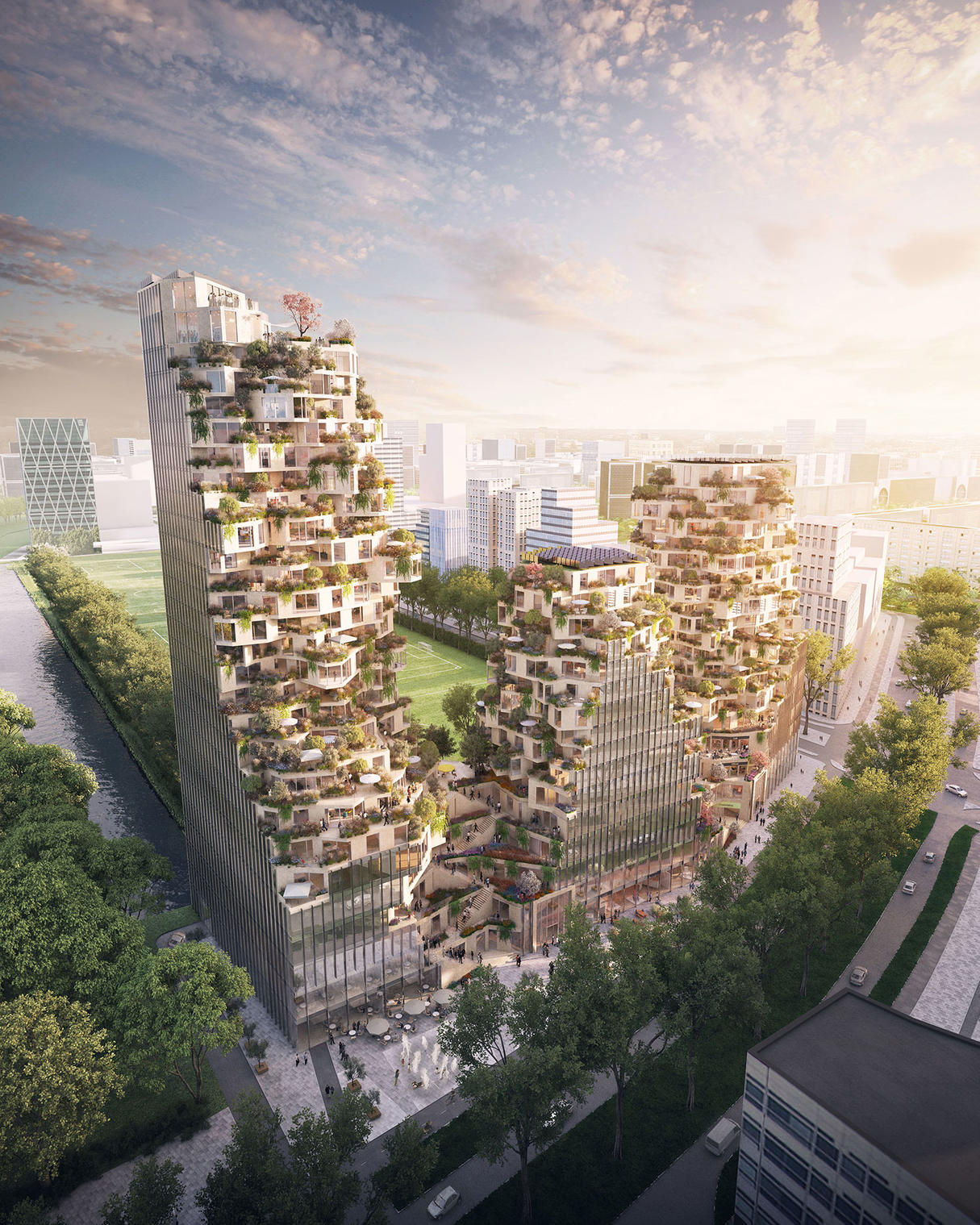 Let’s start with the case study. The City of Amsterdam chose developer OVG Real Estate and architectural firm MVRDV to produce a new building in Zuidas, the city’s latest emerging business district. The proposed complex, Valley, will house a mix of residencies, offices and amenities, spread out over three towers, overflowing onto terraced balconies. A vertical forest adorns the cliff, and the building will, to a large degree, be ‘open to the public; the public space literally extends into, and over, the building’, according to the CEO of OVG.

Render vs. reality
Now have a closer look at the rendering, that extensive piece of imaginary. You don’t see light dropping in like that every day, do you? No. It’s there because this is a digital interpretation of the architect’s ambitions. The diamond rock looks wonderfully transparent, but glass is reflective, so the building will eventually look more like a mirroring lump. The unavoidable budget cuts on materials and programme won’t contribute to the outcome either. We should also be skeptical about all that space, in and on the building, actually being accessible to the public. However, the fact that those balconies don’t seem to have any balustrades is an exciting quality.

Admittedly, the lush bushes on the balconies and terraces look stunning. But how will those sky gardens hang in reality? Bushy buildings are the trend of the 2010s, but it’s difficult to recall any successful real-life examples on this scale, including Stefano Boeri’s archetypal Bosco Verticale in Milan. These sky gardens never come to look as lavish as their renderings. Not only because of the smog (Valley is situated directly alongside Amsterdam’s ring road) or high winds damaging the plants and trees, but also because the greenery can’t flourish unless it is planted in adequate soil. And more to the point, it’s not spring all year round.

Presenting the building as a vertical forest and announcing it as sustainable, has the distinct whiff of green-washing. The construction industry is a major source of pollution, and the plants which will eventually populate the balconies, won’t compensate for the CO2 outpour produced during construction. Recently, the developer OVG also delivered The Edge, the new headquarters of the consultancy firm Deloitte, also in Zuidas. Based on BREEAM rating, it is now the ‘most sustainable office building in the world’. Wow. But it doesn’t say that Deloitte left its former headquarters empty, elsewhere in Amsterdam, with it only being in use for 12 years. Dumped for a younger, more prestigious showpiece.

And what about the perspective used in the image? Valley is visualised from the view of a bird hovering above Amsterdam’s ring road. Not many people will be able to see it from this angle. With its nearest comparison being the view from ABN-AMRO’s adjacent headquarters.

Walking on ground level, all you’ll experience is another glass box. Maybe with a few green leaves hanging down from the top.

In short, the future reality will be considerably less dream-like than the rendered future suggests.

Architects as make-up artists
Can you even blame the architect? Is architecture today anything more than make-up for real estate projects?

Architects are dependent on clients and often (too happily) play their part in this game of seduction. The rendering of Valley is no more than a sales image used by OVG to convince the municipality, allowing the former to continue to profit. Not that the city is doing this out of kindness: it has also made millions selling the plot.

But looking at the predicted Valley, what we see mostly is an empty, nicely decorated shell. It is not only a visual misrepresentation of a future reality; the accompanying text is a sales pitch filled with hollow marketing terms including ‘unique’, ‘distinctive’, ‘innovative’, ‘sustainable’, and, ‘high quality’. It doesn’t include any of the features by which we can properly evaluate the building. You could argue that they are no more than vehicles for investment, both the rendering and the future Valley.

Everything described above doesn’t mean that Valley won’t be beautiful, functional, and pleasing to many people, but all we see now is a pretty presentation of a potential building. The image is an optimistic representation of progress, and is simultaneously used as promotional material for Amsterdam’s not too popular Zuidas district, as the director of Zuidas district explains: ‘OVG’s proposal, designed by MVRDV, has a bold and distinctive architectural appearance and marks a crucial turning point in the development of Zuidas into a mixed area with housing, employment and services. This plan effectively increases the attractiveness of Zuidas.’ Let’s hope it does, because now hardly anyone goes there voluntarily.

Why question architecture, right?
This is architecture reduced to cosmetics. Renderings hide the ugly sides of architecture and urban development, and the media buy it. But Valley will not turn out to be this ecstatic building. What’s worse is that images like these daze design writers and numb the discussion we should be having about architecture.

Most of the media covering architecture do little more than unthinkingly republish the spectacular imagery and empty PR texts provided by developers and architects. Naturally, it also happened with this MVRDV image and OVG text, on websites including Dezeen, Designboom, ArchDaily and several more (and in Dutch newspapers).

And why would they be critical? Their existence relies on clicks and traffic, they make the most money when they are the first to publish the most sensational content. But while they pretend to cover the news, architectural media, and the press in general, are developer’s and architect’s PR channels. 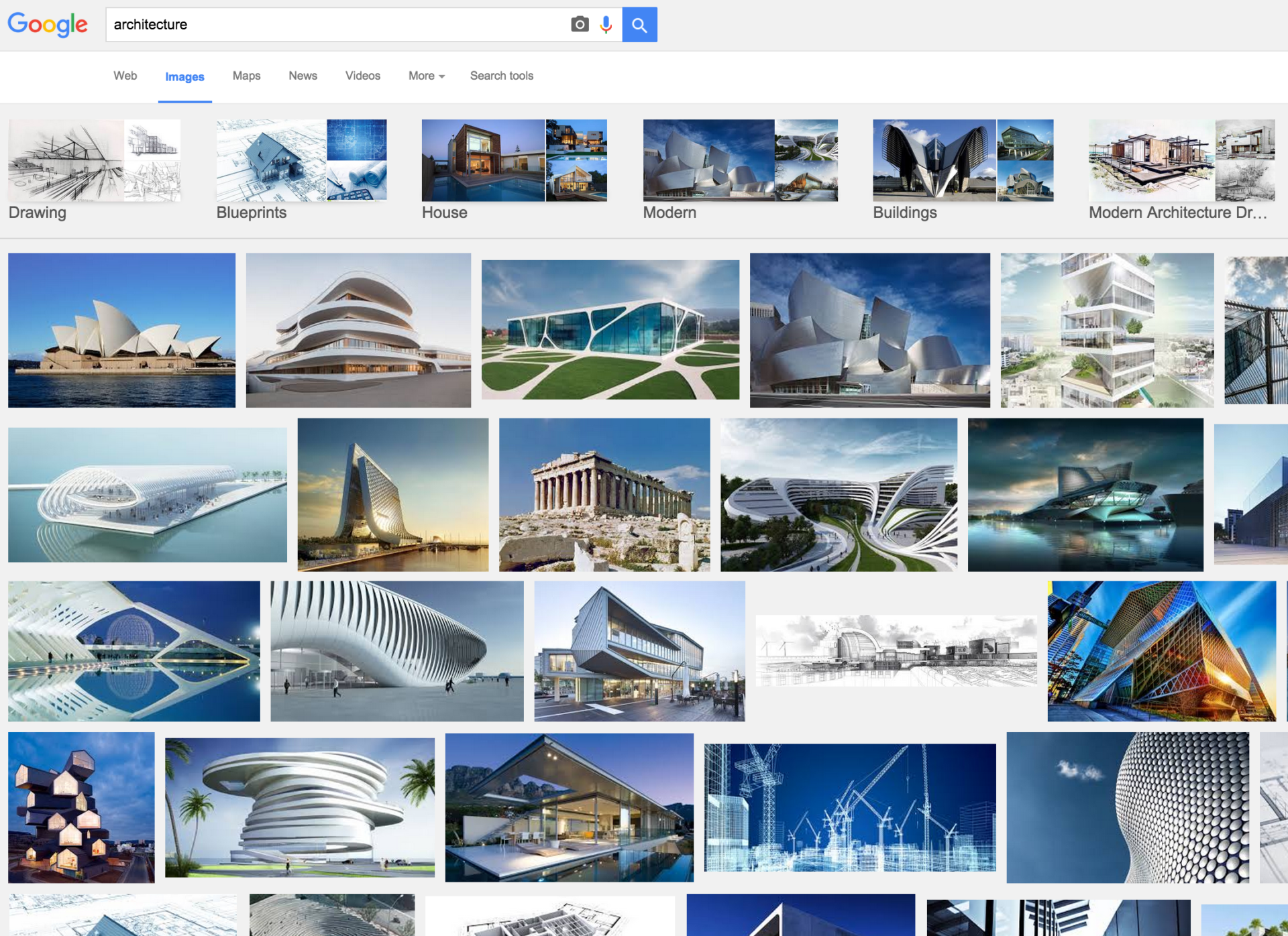 Top Google hits for ‘architecture’. Thanks to the media, architecture becomes a false reality.

The biggest problem is that because of this visual deluge, people associate architecture with luxury and exclusivity, instead of everyday social and public issues. This diminishes the societal relevance of the profession. The questions that should be asked, are left silent: do we really need this building? What issues are facing the city and how does this building contribute to solving them? Who’s paying for it? Who’s profiting from it? Who will be allowed to use and enjoy it? How affordable will the residential units be? How sustainable is its construction and use?

I’m not arguing that Valley will score badly on all these accounts. What I am saying is that forthcoming architecture is often poorly, if at all, judged on criteria like these. The resulting ignorance is a problem, because a well-informed, critical audience could enforce alterations or suggest better alternatives.

We should pay attention to the design of the world we want to live in: the kinds of neighbourhoods, cities and societies we want to inhabit, how architecture can contribute to that, and the different forces that influence it. We should not let digital delusions mislead us.

An earlier version of this article (in Dutch) appeared on VICE’s The Creators Project. The author was awarded the Geert Bekaert Award for Architecture Criticism for this article.

Update: Initially, the project was called Ravel Plaza. When the name of the project changed to Valley, the name was updated in this article.

Update: MVRDV responded to this criticism in the article “In Defense of Renders and Trees On Top of Skyscrapers” on ArchDaily.