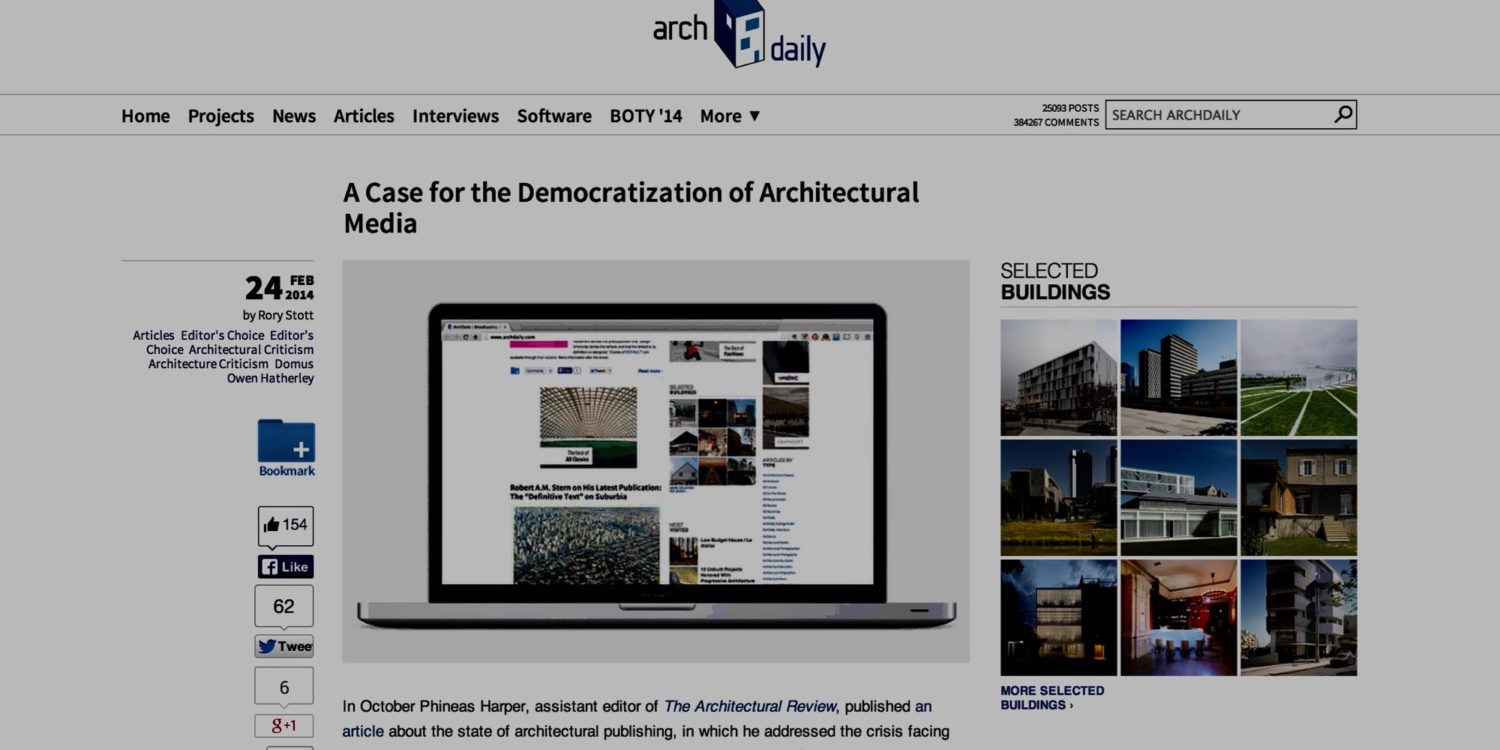 ArchDaily defends itself from criticism over its lack of architecture criticism.

ArchDaily is successful, in terms of what it does. It is a huge media outlet for architectural offices to show their latest work, and it is also a great resource for references, facts, and overly aestheticized imagery of new architecture (which surely won’t resemble the sights presented when you eventually visit the places in reality, if they ever are constructed). This popular website is an example of the current state of the architectural media, which is less and less concerned with critical reflection. ArchDaily primarily focuses on design and architecture (using superficial design jargon), rather than discussing its public and social relevance, let alone the politics and financial models on which it is based. In short, architecture needs a reality check.

Failed Architecture sees itself as an antidote to this, while trying to retain its autonomous position and critical content. Our content is still small compared to the big wave of posts on ArchDaily, numerous other large websites and endless smaller architecture eye candy reposters. Of course a website like ours will never reach an audience like ArchDaily does, but our network of engaged people and interested organisations gradually grows, as does our body of content. Additionally, our workshops are increasingly implemented in architecture schools, adding critical reflection to education to counterbalance the general obsession with progress (at all cost) and the newest, of which ArchDaily is emblematic.

Rory Stott, contributing editor to ArchDaily, defended ArchDaily in response to an article published by The Architectural Review’s Phinneas Harper on Uncube, which was (via another article by Elvia Wilk) triggered by Jan Loerakker’s article on Failed Architecture. Phinneas Harper called for the de-democratization of the architectural press, arguing that it only leaves room for content users are likely to click on (because clicks equal advertising income). Stott responded to Harper’s piece, being honest about ArchDaily’s model but also pointing out that the media outlet tries to generate original and critical content. He mentions a few examples, all written by himself. These all avoid criticism, instead side-stepping the issue with positive and descriptive terms.

ArchDaily doesn’t have to defend itself. It does what it does best: giving the world visual design pleasure. It’s just a shame that because of its huge popularity the more critical architectural media remain unnoticed and substantive analysis of architecture doesn’t reach the large crowds. But that’s something the more critical and independent press has to deal with themselves, perhaps by adopting some of the presentation skills of architects and the popular media to get their message across.

A day after it was published Stott’s article was not even on ArchDaily’s front page – it was swallowed by architectural eye candy.