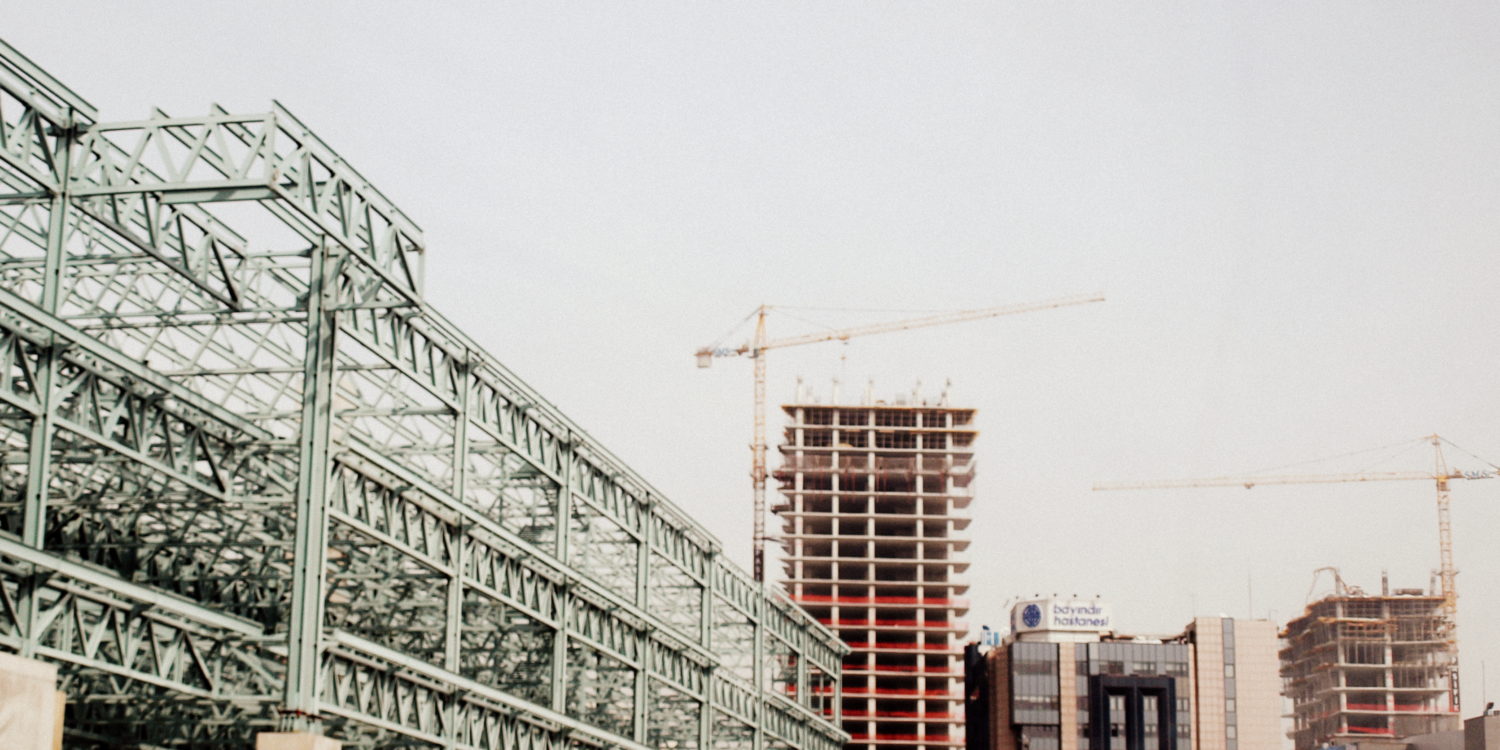 Passing through the main arterial road of Ankara, people got used to seeing a greenish steel skeleton. It was a gigantic construction, located at the heart of a new commercial and business development site, representing neither development nor life for the city. This steel structure was actually the construction of a convention centre. Before the process began in 2005, there were high hopes regarding the project. It was to be the apple of Ankara’s eye with its architectural appearance, central urban location, human accessibility and high car-park capacity. The total construction area was colossal. It would be a 140.000m2 development on approximately three hectares of land, including a future metro station. The convention centre was supposed to contain conference halls, meeting saloons, shops, and cinema theatres, to serve the people of Ankara. The building should have been completed within a year. However, these words with which Ankara Municipality introduced the project would soon turn out to be ironic: “This congress and commercial centre will contribute to the cultural and commercial development of Ankara. It will add value to the city with its aesthetic appearance.” (October, 2005) 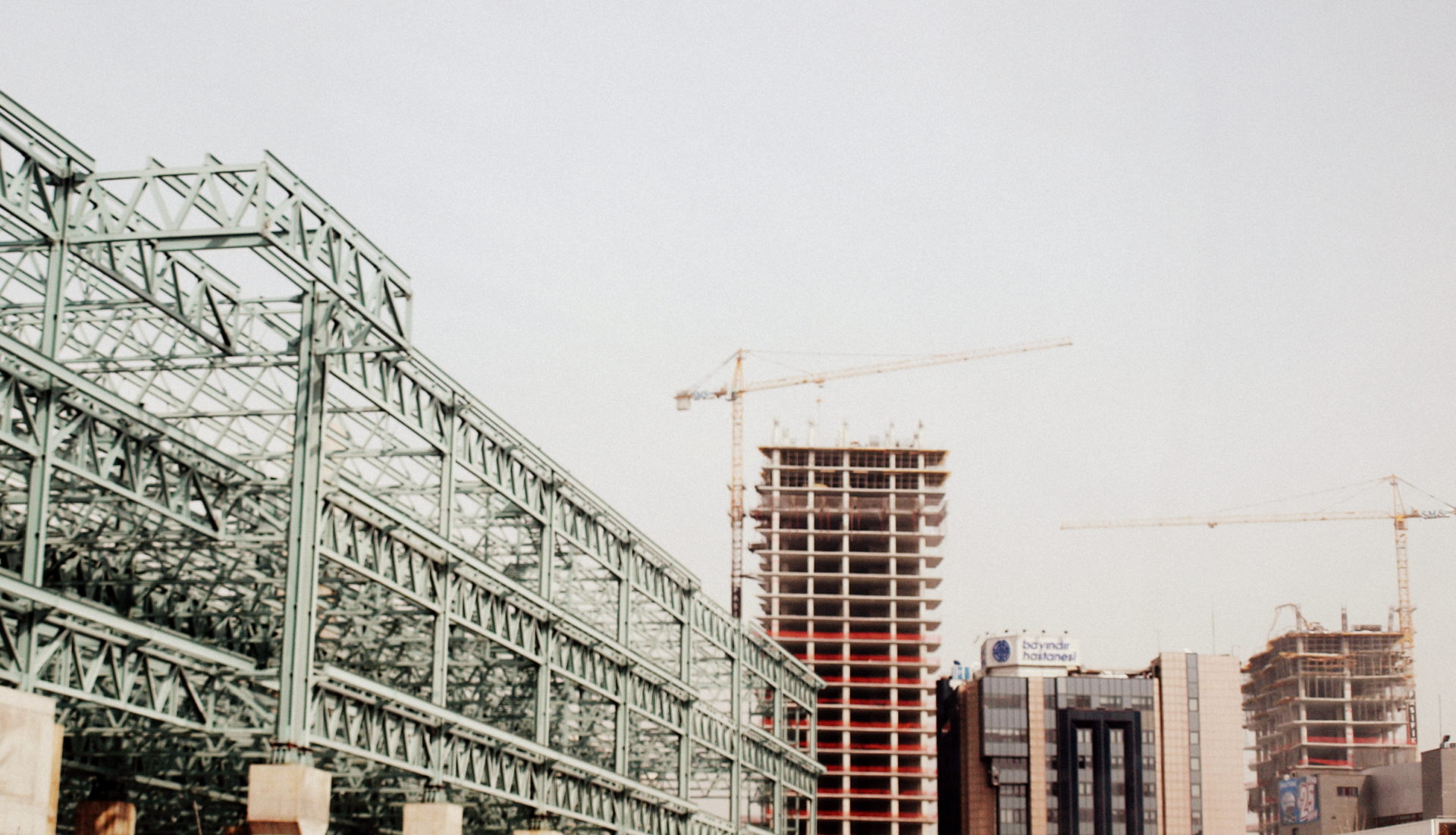 As the green steel was rising, so were the problems. By 2008, approximately 72.000.000 TL (27 million euro) had been spent on the project. However, that year the fancy dreams started to collapse. Multidimensional problems emerged regarding the site selection, functions and position of the block and its surroundings. First of all, the site is a planned commercial district, but it was already being suffocated by ambitious projects for business and retail purposes aiming to commercialise the city. All of the new developments were creating a serious burden on the city’s traffic, since there is only a single road carrying nearly half of the population to the inner city every day. The convention centre was meant to be built near one of the busiest junctions of this road. A projected shopping mall, a hotel, a hospital and another convention centre opposite the green skeleton illustrate the dense land uses around. Moreover, the positioning of the building block within the plot, the setback distance, was in question. Put in proper saying, the block was adjacent to the main arterial, almost overflowing to the road.

The massive construction together with the problems it brought along had to be ceased in 2008. However, the reasons for closure are so vague that defending a single one would be a mistake. Instead, we may list the possible causes. For instance, the mayor claimed that there was no problem with the zoning status of the building. Yet, a source claims that the block was found improper in the development plans of the city. Another website describes the disapproval of an urban transformation project after a judicial process which included the plot of the convention centre. Yet another claimed that the site should be left as an agriculture area, since it was an extension of the urban farmland of Ankara. The list of issues continues. 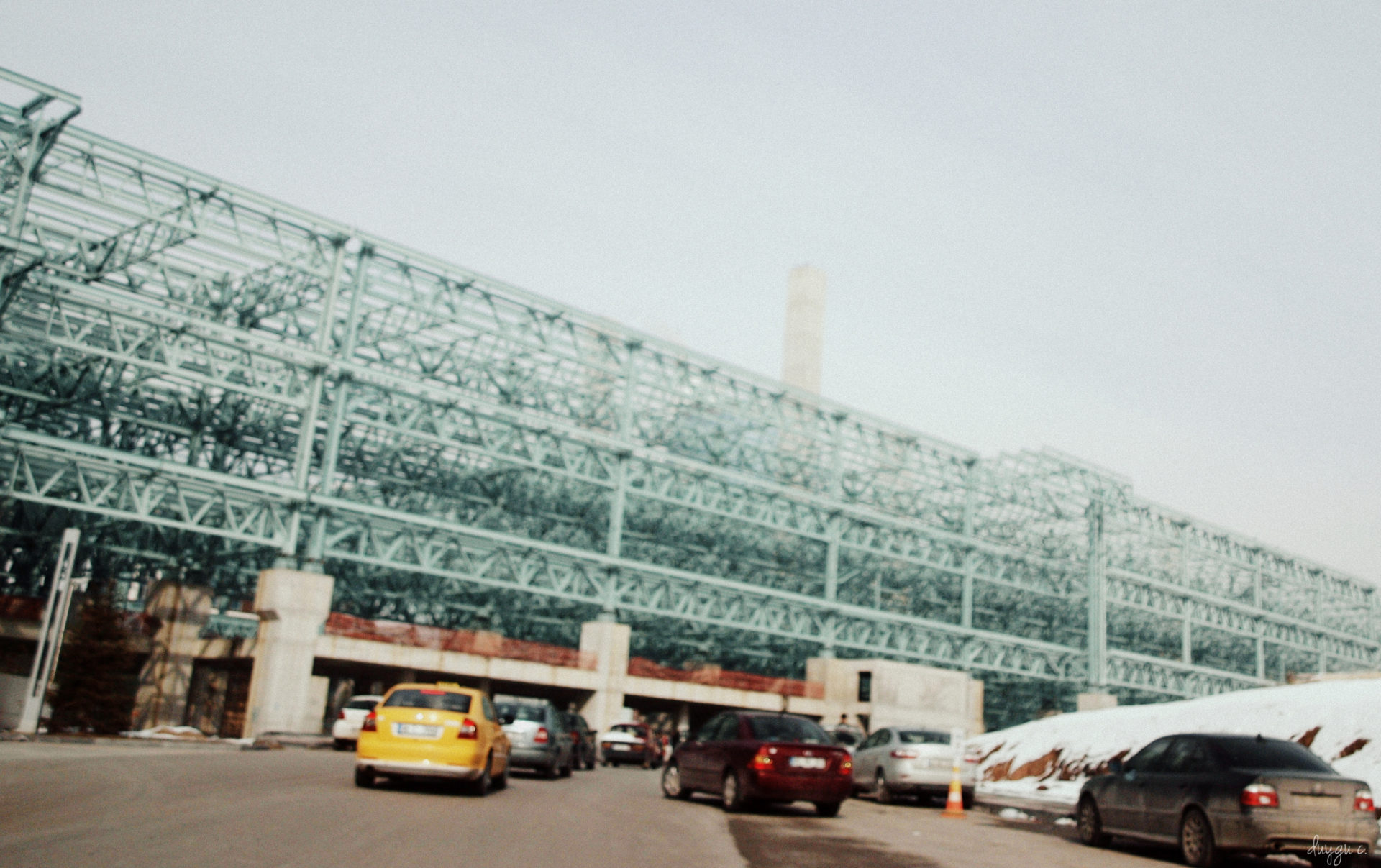 Whatever the reason was, the gigantic green steel structure continued to cast its shadow upon millions of people for years. People started to label it the ‘iron cage’ (you may find interesting parallels with Max Weber’s sociological concept) and this name became so legitimate that all newspapers and authorities started to use it when referring to the building. Even this shows the alienation of the convention centre from its intended function and appearance. Some even called the structure the ‘freak of the capital city’. For a certain period, the steel structure was used as a huge advertising panel covered by metres of print-outs, and from time to time the wooden panels were painted by some graphic activists. It was trash made from steel, of which no one could understand what it was and why it was standing there. At a certain point, the opposition party placed a banner on the building saying “Mayor, what is this?”.

Simultaneously, ambitious architectural creations developed around the almost-convention-centre including a five star hotel, new shopping malls and two residential towers. The misfortune of the land continued. After a series of unsuccessful close tenders initiated by the Ankara Municipality, a final deal was made with a construction company in April 2012. According to the mayor, the company will be responsible for the construction of 1650 new dwellings and 3 hectares of business area. The amount of money at this point allegedly is nearly 90 million euro. The land was sold together with the steel structure it housed. This evoked a lot of ironic public resonance because its dismantling cost even slightly more than its construction. The news buzzed ‘Removing is more expensive than building’. Whether it is being built or removed, the total cost of this ‘dream’ was over 50 million euro, an unacceptable waste of public resources.

In the lot of the former convention centre, there were said to be two residential towers with over 80 storeys. This created a huge reaction from the public and NGOs. It seems as if no single lesson had been learnt from the downfall of the convention centre. The high-rise projects would create significant problems for the inefficient infrastructure of the city. The main arterial and its heavy load of traffic combined with the various projects rising to the sky around a very problematic junction already shows that the location cannot handle this amount of density in its current situation. Without a doubt, the intended tower projects would bring a substantial amount of collateral urban problems. The realisation came that the project doesn’t fit the development plans of the city of Ankara and after the chamber of city planners took the case to the court, its execution has been suspended. 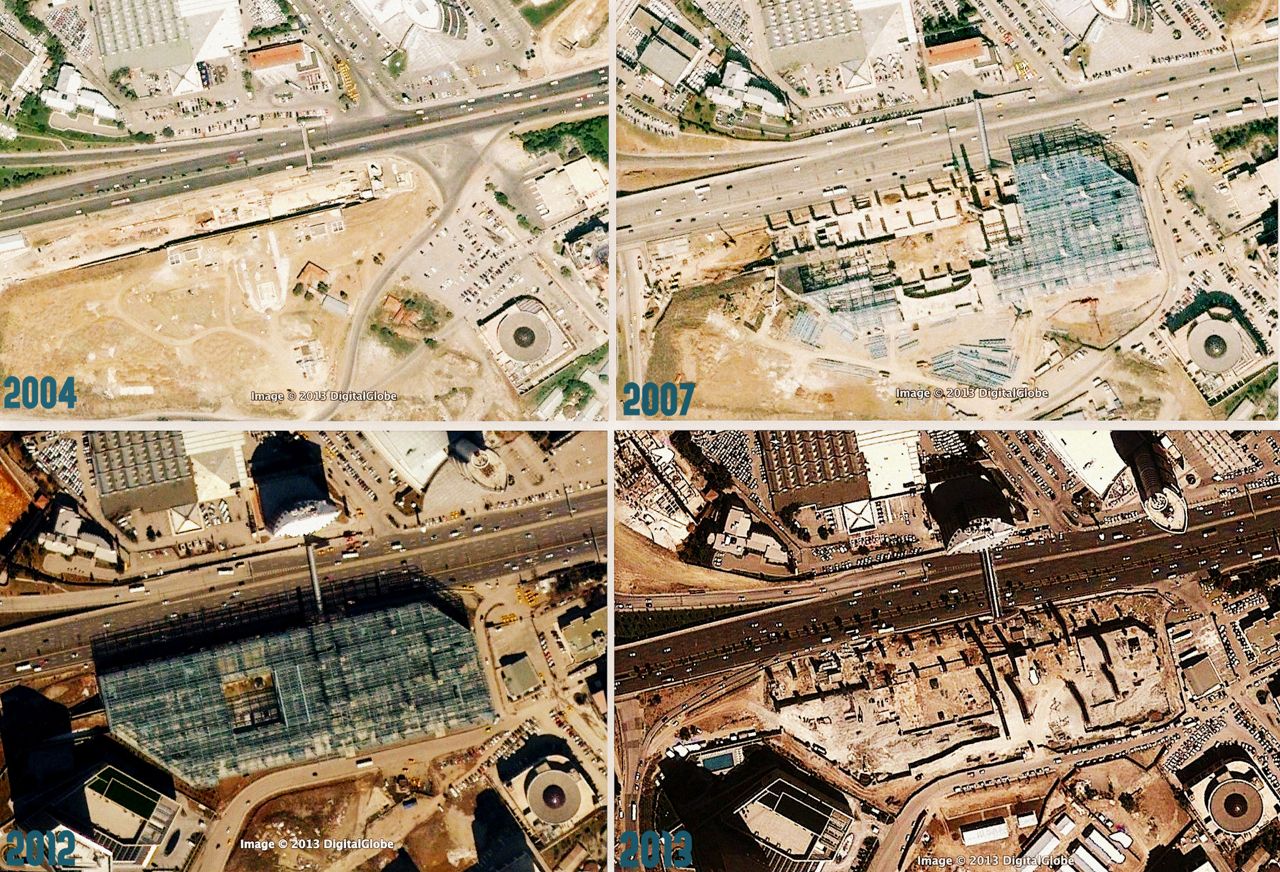 The construction and destruction of the convention centre over the years.

To sum up the story, the construction of the convention centre started in 2005 and ceased in 2008.  By that time, only the steel skeleton was completed for around 27 million euro. Since 2008, until the middle of the 2012 the construction was left idle. The final decision about the fate of the structure was its complete removal, which also cost around 27 million euro. Hence, the city spent over 50 million euro on a steelscape to make the people of Ankara watch an instant ruin at the heart of their city for five years.

The intricate story ends with a profit-oriented perspective of the municipality. The last tender resulted in a 90 million euro offer. There are millions of dollars flying around in the scope of this discussion and not a single penny of it is spent in line with public interest. Rather, the investments work against it. The core problem is the city governors’ lack of vision. They approach the urban land as an absolute commodity. Therefore, the conflicts are never settled in favour of the daily lives of the people in cities like Ankara. The steps taken in governing a city are mostly about developing the city in terms of mega structures – not about developing urban life in terms of ‘details’ such as public transportation, arts and cultural facilities and green areas. The make-up can save the face of city for some time, but what is behind will eventually appear.

add comment
duygu
Now that I am seeing after six years of writing this piece, sometimes you have to like what you have at hand. The speed of urban transformation in Turkey has left the area with a monstrous piece of architecture, off-scale and (although this will be a subjective attribute) hideous.
John Hupp
I would tend to attribute abandoned public works projects to issues with construction contracts. Governments should never start construction without money in hand and legal contracts signed for the entire phase of the project. (Of course, neither should private developers, but their failures generally don't cost taxpayer money.) Basically when a government administration turns over, if the contracts are not locked in place it's incredibly easy for the successor to pull the money and kill the project. This is to say nothing of the merits of the proposed development. But large-scale projects need a reliable legal framework to ensure they are completed as planned. I highly doubt the design of the "Iron Cage" was responsible for its demise.
Çetin
A very good summary of what I’ve seen in Ankara for more than 3 years. I’ve always felt sorry and got angry passing through this ugly freak. I feel the same since this greedy, blood-sucker mayor of Ankara Metropolitan Municipality is still in charge and he is now building 5 ugly, nonsense gates and 52 ugliest clock towers, which cost more than 15 million euros…
Related