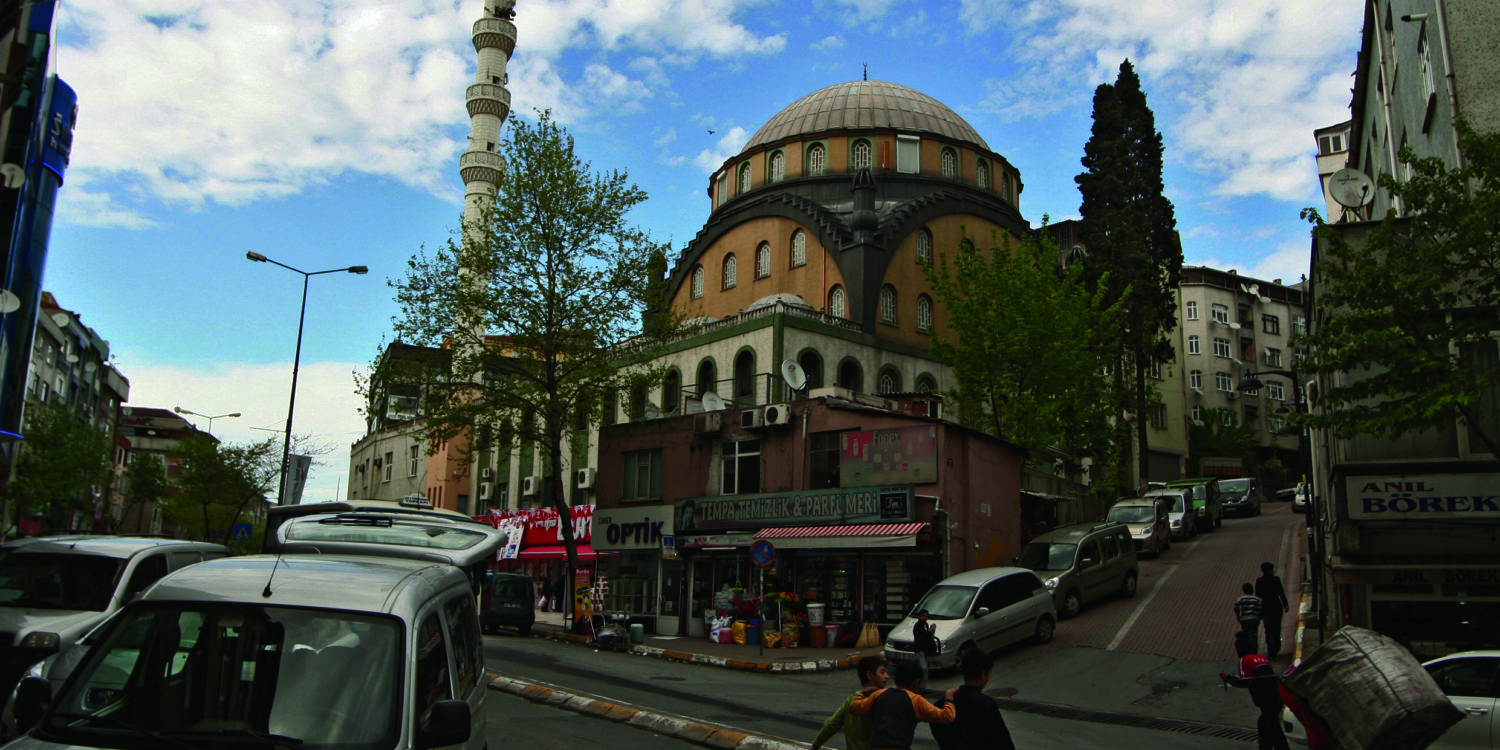 Much of Istanbul's urban form originates from informal developments but rigorous government planning is on the rise, resulting in an increasingly segregated city.

Despite the huge protests, the Istanbul court recently allowed the developments in Gezi park. The publicity around the project unveils just the tip of the iceberg of what we could call the social injustice of the Istanbul development practice. Last year another project made it into the Dutch media: the forced ‘gentrification’ of Tarlabasi. Insiders will remember the controversy raised by the redevelopment of Sulukule that started in 2005. Although the forced departure of residents is disputable, they often lack legal grounds to fight it: more than 50% of the city has informal origins and the threat of earthquakes is always near. This provides two valid arguments to rebuild certain area’s.

Like many megacities in developing and undeveloped countries Istanbul has a fast growing economy and an even faster growing population. The population passed the 5 million around 1980 and is estimated to reach the 17 million around 2020, and a fair share of it is caused by immigration. The rapid growth goes hand in hand with a struggle between socio-cultural groups for a place to live in the city, with the corresponding migration within the city and from outside.

This article explores how the changing roles of the governmental planning apparatus and self-organisation led to, and still produce the specific urban form(s) of Istanbul: the self-organised city meets its radical counterpart! 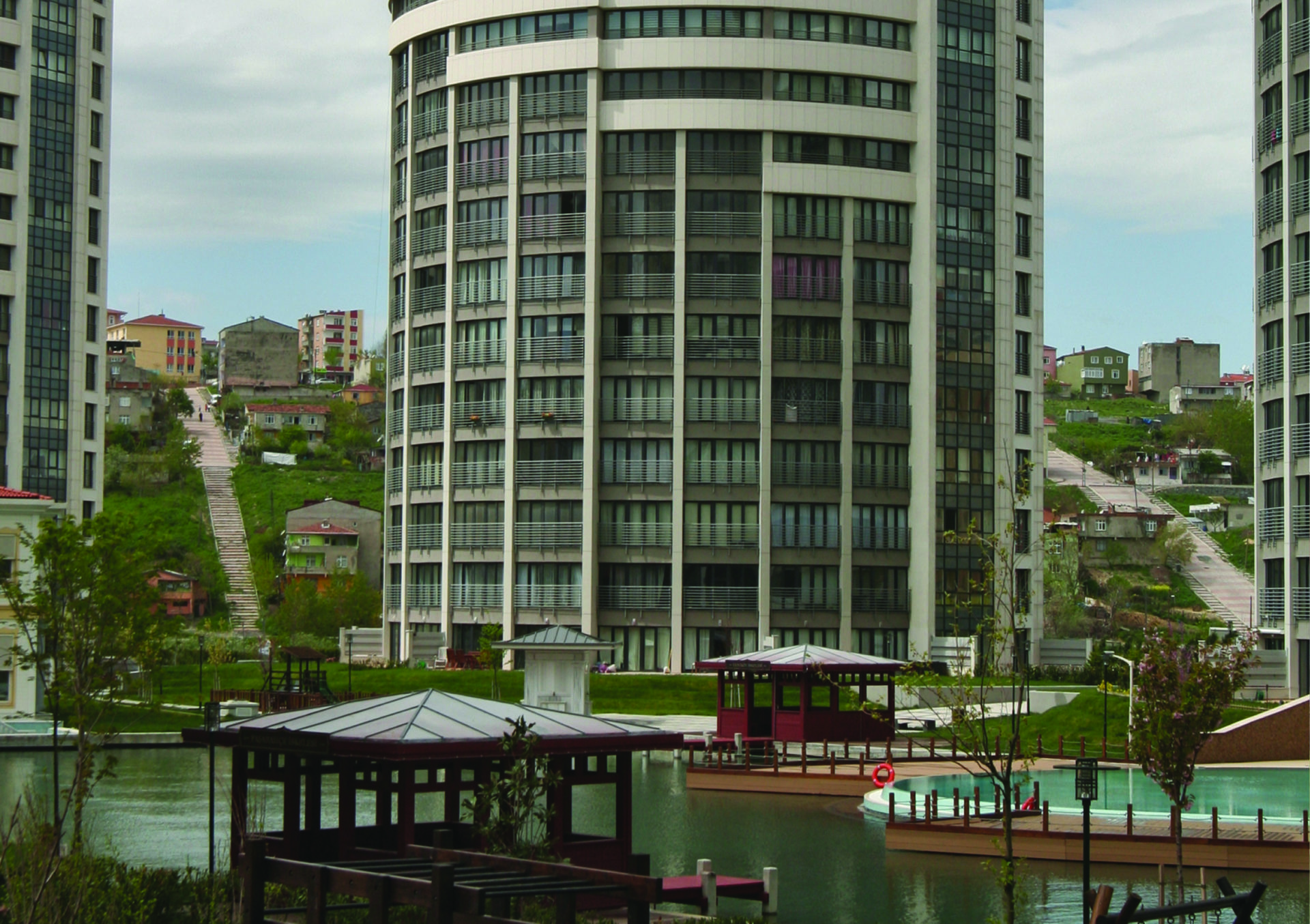 A gated community (‘Bosporus city’) surrounded by the informal city.

The informal practices are a result of a process that started after the second world war. In the young Turkish republic the rural mechanisation led to unemployment in countryside of Anatolia while at the same time Istanbul’s industrialization provided opportunities. This led to the first wave of mass migration towards Istanbul. The migrants built up their own houses just outside the peninsula’s city walls. People originating from the same village or region typically ended up in the same mahalle (neighborhood). These self built houses are called gecekondu, which literally means ‘built over night’. According to the regulations illegal building was prohibited, but existing housing was not allowed to be demolished. Therefore the simple dwellings were erected in just a single night and upgraded afterwards. The government nor the employers of the big companies had the means to solve the problem of the gecekondu issue by building suitable housing for the immigrants. Instead, sometimes in the exchange for votes, (local) governments provided basic infrastructures like water, roads or electricity, and even issuing title deeds. Informal sprawl became formal city. From the ‘70s on the car became more present, which gave the more well-to-do inhabitants the opportunity to escape the congested city into their new suburbs, later on often in the form of gated communities. A way of ‘formal sprawl’. From the ‘80s the government started actively financing and developing mass housing with their own company: TOKI. This meant a radical break with the dense informal city: the big pink, yellow or green concrete slabs towering over the city’s edges remind us of the modernist ideals.

The development of Istanbul at a larger scale can be characterised by two directions: East-West and South-North; we could mark them as ‘quantity vs. quality’. The two bridges crossing the Bosporus indicate the East-West development and the majority of the city sprawls along the Sea of Marmara, enabled by the highways and the two bridges. This is the main area of informal city and TOKI projects. The Northern direction grows along the Bosporus into the forest and is home to the more expensive and exclusive environments. 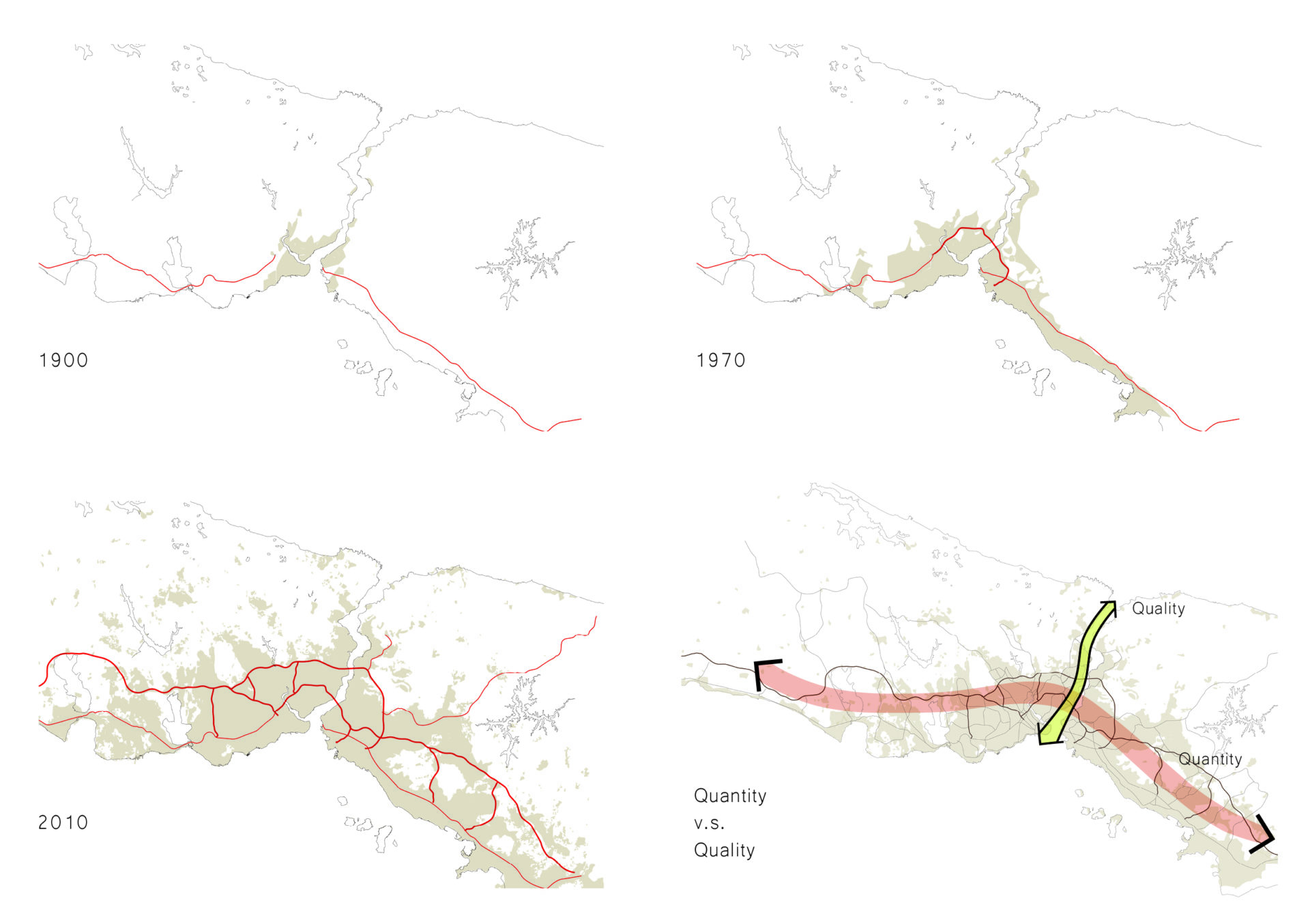 The growth of the city roughly follows the main infrastructure. The more exclusive milieus sprawl along the Bosporus.

The phenomena of formal and informal sprawl are still taking place. But the city is not just growing: as mentioned before redevelopment is becoming more and more important. The city centre is becoming more attractive to live and land prices are going up. This puts some development pressure on the central area’s inhabited by relatively poor communities, with (sometimes forced) relocation as a result. The poor building quality makes the informal city vulnerable to earthquakes which makes a valid argument for redevelopments. Compensation housing is sometimes offered: in TOKI towers at the edge of the city. Considering the time and cost of travel it is obvious that not all of them can maintain their job. This apart from the inability of the TOKI blocks to let people start a business; because the TOKI towers are cut off from the vibrant streets of Istanbul, there is simply no space for other activities than dwelling.  Regularly these people start looking for new opportunities in the centre and will eventually move back when they have the chance.

All forms of migration are present in the city: the escaping flows of people feeding the gated communities, new inhabitants settling at the edge of the city (or with some luck, in the centre), eviction from the centre and gentrification area’s which attract a new crowd. 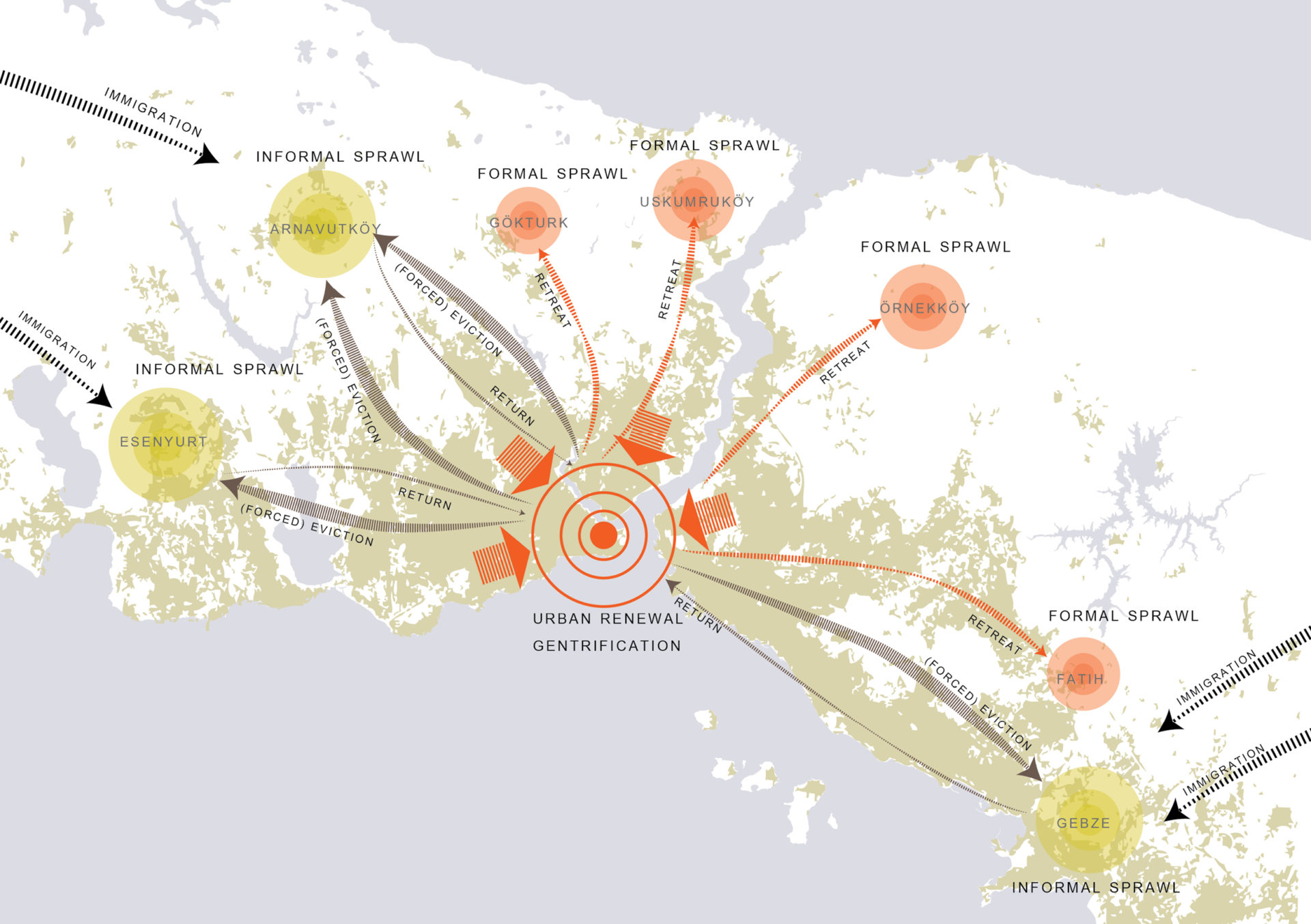 The migration movements within the city. 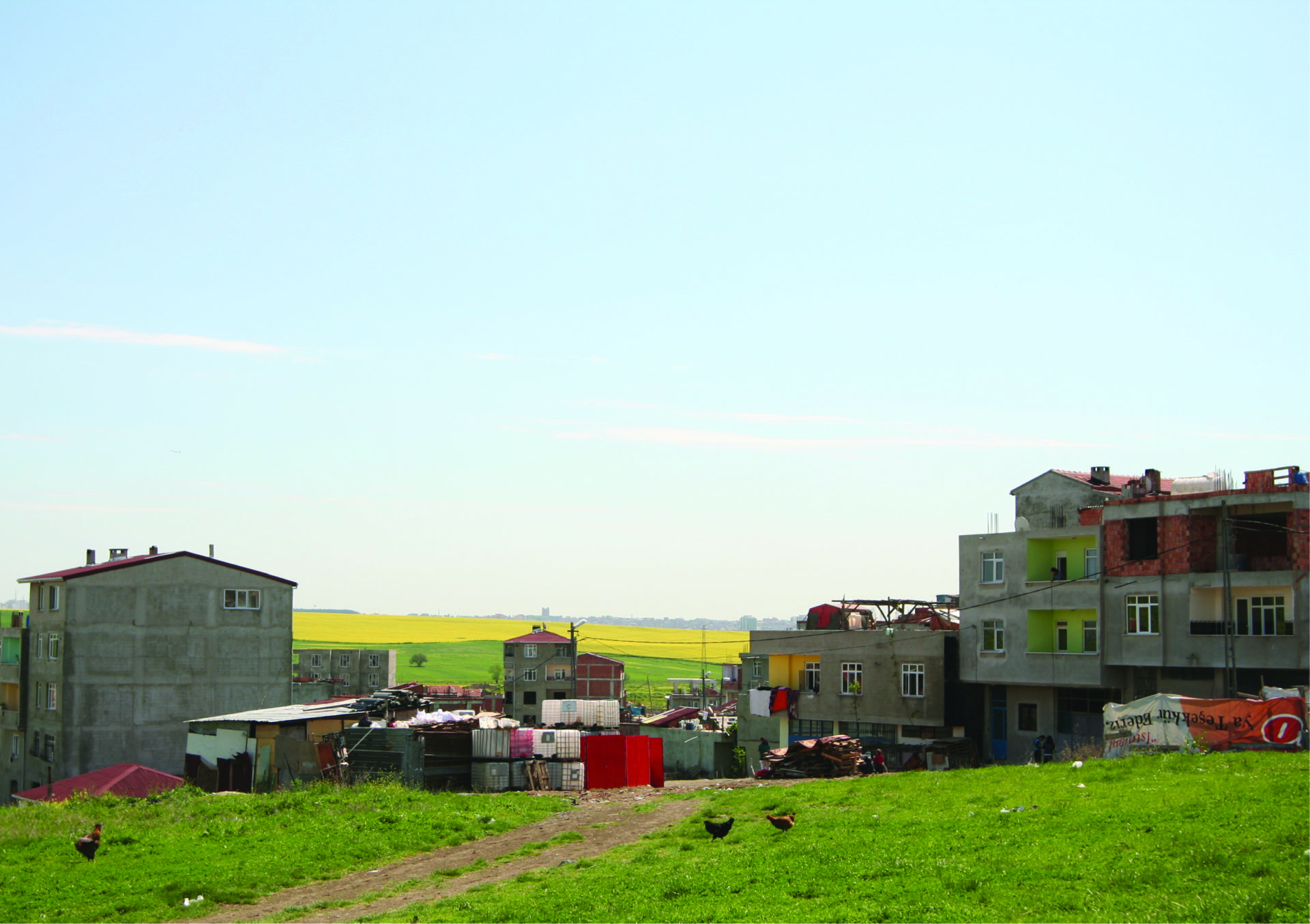 City to be: Esenyurt.

All of the mentioned migration flows can be associated with specific building forms. The initial spontaneous settlements had two forms: the organic, unplanned form and the rational, planned form made by landlords and speculators. Zeytinburnu is one of the oldest informal settlements , started as a self-built garden city. It is now a dense, lively and economically vital part of Istanbul. Zeytinburnu gives us a glimpse into the future of self-built neighborhoods that started developing recently, like Esenyurt. Sirinevler and the rational part of Esenyurt are examples of spontaneous settlements with a rational parceling, laid out by local landlords. In the chart below more samples are shown. 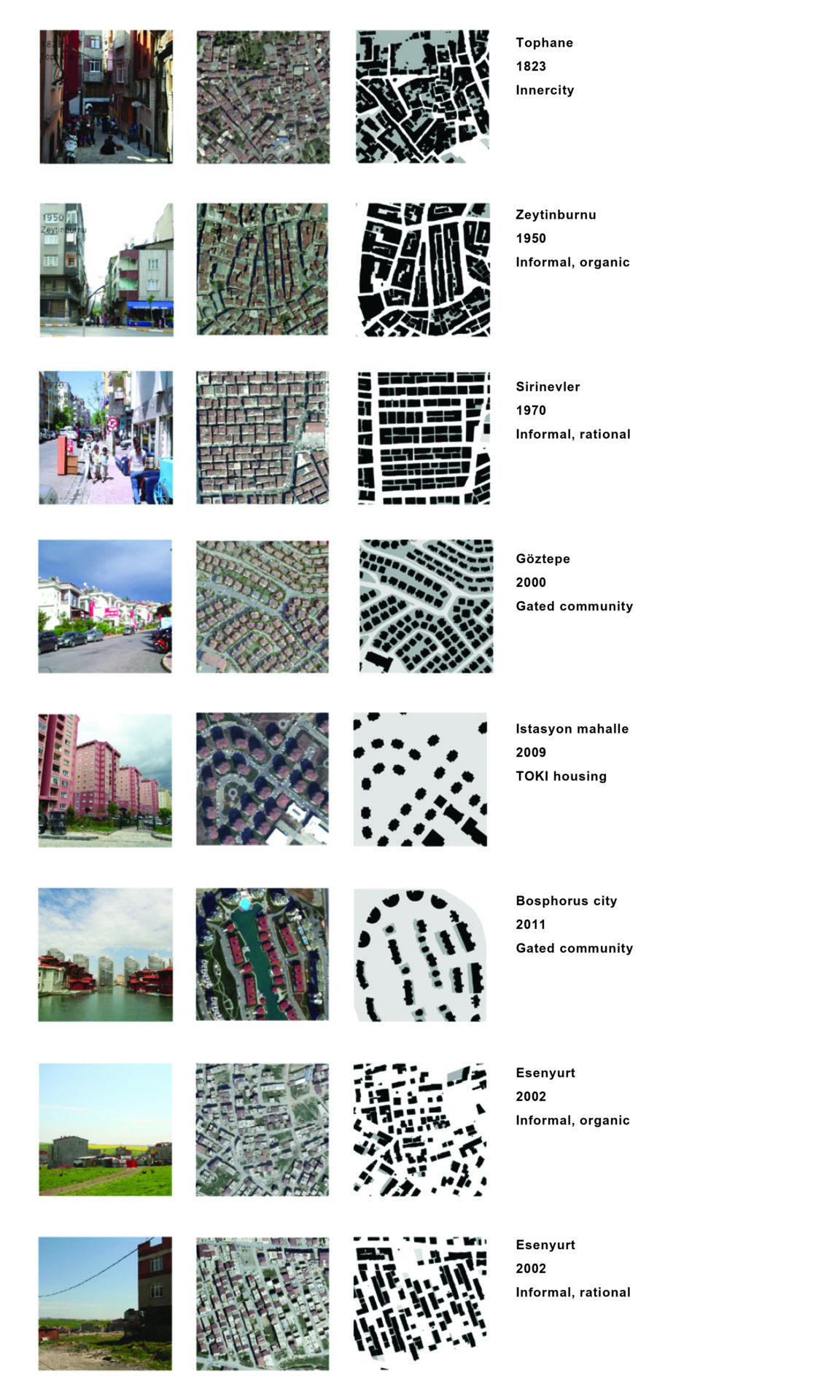 Chart of different types of settlements that form Istanbul. 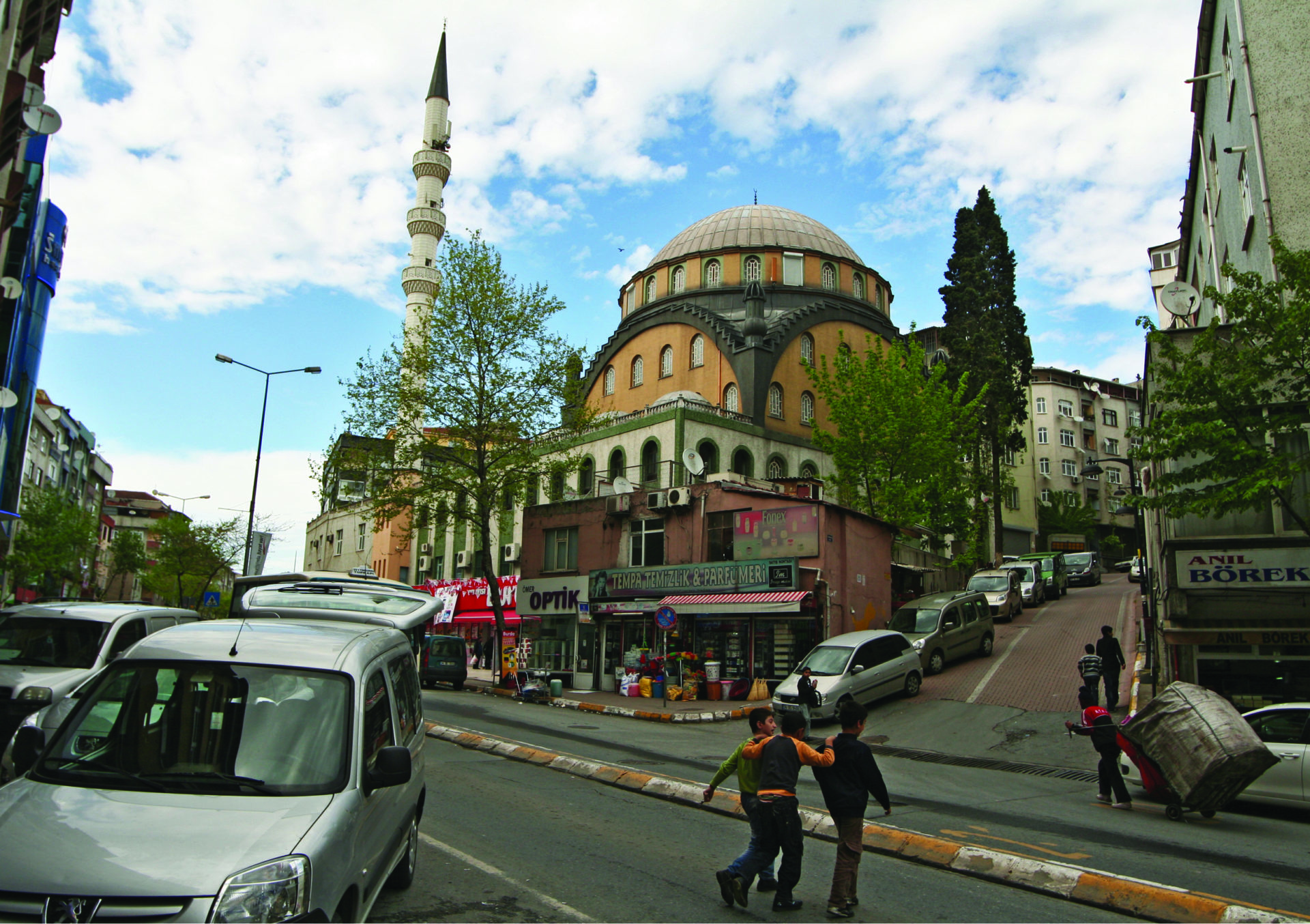 Zeytinburnu: one of the oldest self-built neighborhoods is now a lively part of Istanbul.

What can be seen as ‘failed’, or as a success, depends on who you ask. The earlier passive governmental ‘strategy’ of tolerating informal settlements without providing an alternative, clearly is a failed policy. However, it generated a lot of lively, diverse and productive neighbourhoods, which can be seen as very successful. Now, as the government tightened its grip on spatial development, those neighbourhoods are not regarded successful anymore. Vulnerable to earthquakes, a high density, lack of public green and congested streets, all reasons for some people who can afford it to move to a gated community or TOKI project. As the radical counterpart of the organic city they possess light, air and space, the three principles of modernist architecture. The solution for the housing demand in modernist mass housing is regarded a failure by many in other countries. The main concern with the TOKI projects therefore, is that the same issues and stigmas might arise in a couple of years that have been haunting the many modernist experiments in the Western world already for decades.

It almost seems like the rigorous government policies and development practices compensate for their absence in the decades before. These practices do not respect the spatial qualities and social connections which are characteristic for those self-built neighbourhoods. A strategy of upgrading without destroying would therefore be appropriate.

The majority of the build-up area in Istanbul has informal origins. These neighbourhoods in Istanbul often have similar challenges like the 19th century neighbourhoods in Europe during the industrialization, with the presence of cars as extra challenge. To create a healthier neighbourhood the public space must be reclaimed from the car in favour of the pedestrian space. In addition, the development of parks will provide the necessary space for outdoor activities. And some rezoning could help to minimize the nuisance from the always running (textile) factories. On the other hand the density and the high mix of functions results in vibrant streets with continuously people on the streets. Hence these streets gives many business as well as social opportunities.

The growing popularity of gated communities is the spatial manifestation of social segregation. People tend to like living with the same kind of people, which is now happening more and more. This will certainly not stimulate a sense of community between social groups, or their mutual understanding, and is perfectly in line with the current social unrests. At the same time this spatial segregation is not unique to Istanbul and could be seen as a property of 21st century mega-cities. Adding superglue, consisting of pedestrian networks, parks or new public realms between those islands is therefore perhaps an outdated Western ideal. However, what additional quality of life the ‘city of islands’ brings, remains unanswered.

All visual material is courtesy of the authors.