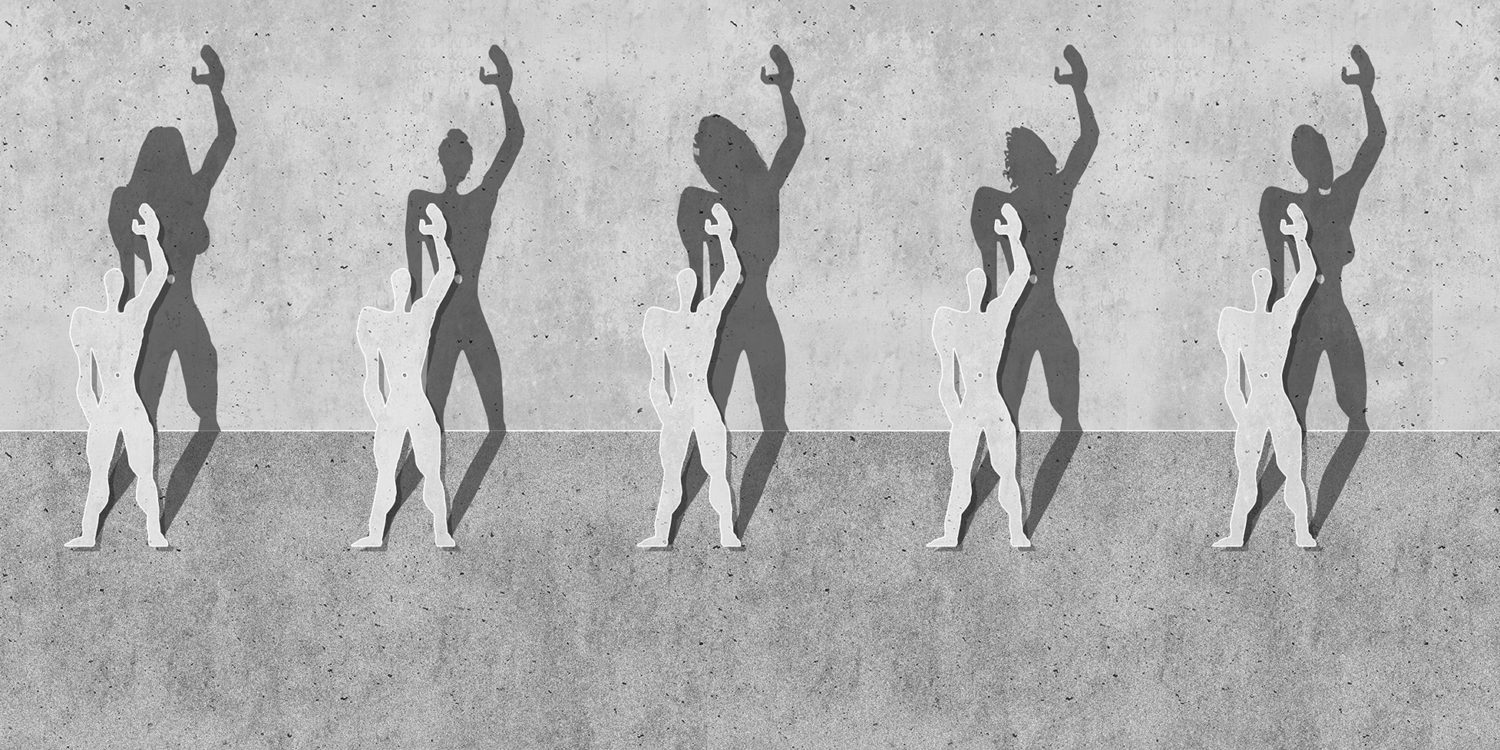 From education and theory, to public space and building regulations, architecture still fails to acknowledge the presence of trans bodies in space.

Towards the end of my architecture degree in the UK last year, I attended a series of classes on “architecture and the body”. They were a mixture of historical overview and critique of current practice within architecture, and took the form of weekly group discussions. I had just recently come out to my family and started transitioning, including starting hormone replacement therapy, but I’d decided not to come out at university. The final year of an architecture degree is stressful enough without compounding it with that, I thought. But, estrogen can have some pretty obvious effects, and transition in general has a way of snowballing. I got comments: I sounded different, I was dressing differently, my appearance was changing, people asked if I was wearing makeup. I was, but embarrassingly I thought I was being subtle at the time. I was visible, far more quickly than I had expected.

The classes covered a wide range of topics, from Vitruvius to Le Corbusier, to phenomenology and colonialism. Disability was touched upon, briefly, but far more time was given to the implications of technology and post-humanism. Queer or transgender bodies never came up, despite the fact that I was sat in the room becoming more obviously gender non-conforming with each week that passed.

It was a good course, but one of the most interesting things about it was the fact that real, palpable issues like disability and queerness were passed over in favour of more hypothetical or high-theory topics. Material issues that I knew were important to me as a trans person were disregarded as niche, esoteric, or unimportant. It was something I saw quite regularly in architectural education, a kind of disregard for the full range of embodied experience.

People who don’t fit the norms imposed on gendered spaces are becoming increasingly common and visible in public. Yet a strong transfeminist perspective still remains largely absent from architectural debate, especially as it pertains to the crucial interaction between gender, the body and the built environment.

Trans people’s experiences of navigating the built environment can be quite different from those of cisgender people. Gender is often deployed, formally or informally, as a principle for organising bodies. Gendered spaces come with a subtle set of expectations placed on the people who inhabit them, expectations about their bodies and how they present them. These expectations exist outside of those spaces as well, but are much more rigidly policed within them. However, trans people’s bodies don’t fit cisnormative expectations, a fact which can be remarkably alienating, as well as endangering.

There is a great degree of scrutiny of trans people in specifically gendered spaces, and an enormous pressure placed on the adequate performance of our gender in public. I’m lucky enough to “pass” day to day,  which means I can appear and be read for the most part as a cisgender woman, making it easier to access the spaces I need to. Many trans people don’t have that privilege, and certainly most go through at least some period of being very visible. Even with the privilege that comes with passing, we’re often expected to engage in a hyper-aware policing of our gendered presentations, for our own safety and for the comfort of people around us, simply so we can exist in public spaces. In a way, this is just an intensified version of the expectations placed on cisgender people, but one where our gender is always already under question.

“Passing” is based on a mixture of genetic lottery, a willingness to perform masculinity or femininity, and wealth. Access to healthcare makes transitioning significantly quicker and easier, meaning that our ability to assimilate neatly into a cisnormative world is entirely dependent on one’s class position. Those who can’t are all too often excluded from public space. A study in the US found that 59% of us have avoided using public restrooms out of fear, with people also avoiding eating or drinking, and an increased rate of kidney and urinary tract infections as a result. In the UK 25% of trans people have experienced homelessness, thanks to a combination of poverty, disownment, and landlord discrimination. But while the homeless population is disproportionately made up of transgender people, those people are also more likely to be placed in danger when accessing shelters. Public pools and beaches are often completely inaccessible: our bodies are too visible and too vulnerable, not only to judgement but to the very real possibility of violence. Trans swimming clubs highlight a need to isolate and segregate ourselves from cisgender people for our own safety, a theme that’s common in trans-specific spaces: they ultimately exist to provide a refuge. Gyms can be similarly fraught, with some operating policies of ‘soft’ exclusion such as telling people to use changing rooms of their “birth gender”, intended to bypass often vague or weakly enforced equality legislation.

This also extends to spaces with less formalised or more situational rules about gendered bodies. I skipped a friend’s wedding because I wasn’t sure how to tackle the expectations that come with black tie when I was in a delicate, early period of my transition, something I’ve seen reflected in other people’s experiences. Travel can be traumatic or even dangerous if you visibly stand out, or if you get flagged to be searched, or simply if your documents don’t match how a particular border security official reads you. All because our bodies don’t fit.

Fear and uncertainty in the face of cisnormative expectations can make us withdraw from public space, but the rise of virtual spaces has helped to foster a sense of community and support among trans people. In fact, it wouldn’t be much of a stretch to say that easy access to virtual space has facilitated the flourishing of trans identities since the turn of the millennium. The simple fact of being a dispersed minority can make it difficult enough to form a localised, physical community. Exact figures are difficult to measure in census, but a 2011 study found that 1% in the UK reported having “gone through any part of a gender reassignment process”. But in the 21st century distance means less than it ever has. And in online spaces our bodies are less likely to become objects for observation and criticism, which can be particularly important for people in the early, painful, and raw stages of exploring gender variance, where they aren’t likely to be able to present themselves how they might want to.

The reactionary backlash to this flourishing has been explored by others in depth, but online community comes with its own inherent systemic problems. We often turn to these spaces when we’re at our most vulnerable, and the people who rely on them the most are the ones who don’t have any other support network. But the hyper-reality present online, especially on social media, creates and reinforces a kind of normative view of transition. As with online culture in general, images of young, beautiful, and cis-passing trans people are treated as aspirational, an example of ‘success’ that can give people hope, but also become a standard to measure yourself against. ‘Failing’ to live up to that image can be all the more dangerous where people don’t have another framework by which to understand and situate themselves.

Architectural theory has a long history of imposing normative ideas onto the human body, as if architects want to design the perfect form to inhabit their buildings. Le Corbusier’s idealised modular man is perhaps the most well known example of this: hand raised, broad shouldered and triumphal. It’s easy to see that Le Corbusier’s modulor largely ignored those who didn’t fit his vision of a ‘good looking, six foot tall policeman’, nor did it meaningfully account for the intricacies of human habitation, which are about far more than simple ergonomics. Projects like the modular man are an expression of the fact that architecture is all too often designed for particular kinds of bodies, to the exclusion of others. Architecture designed to be habitable for one kind of body is not architecture intended for the public. Less grandiose attempts at ergonomics, like Ernst Neufert’s Architect’s Data or the ever popular Architectural Graphic Standards which has seen 12 editions since 1932, by necessity render bodies down to a set of normalised measurements, to be reproduced in diagrams and design. While these measurements are derived as averages, they still represent an idealisation rather than any real, extant body, and plenty of bodies are pretty far from those averages.

Stills from Dys4ia, a video game about gender dysphoria and hormone replacement therapy.

Queer theory on space, on the other hand, remains untapped by the architectural field. Queer geographies, for example, examine how gender and sexuality contribute to the formulation place, and vice versa. But theory is also produced outside of traditional academia, being explored in artwork and online platforms.A 2013 article by Samantha Allen discusses notions of restriction and freedom of movement as they arise in video game design, with games designed by trans creators utilising constraints on movement as a metaphor. She describes her experience of playing open world games before and after transitioning as “the difference between an allegorical representation of my own pre-existing freedom to move and a cruel reminder of the social world’s impassable obstacles.” This kind of theory obviously has something important to contribute to how architects understand the spaces that they design and the people that inhabit them.

And yet, the depth of bodily and experiential difference largely seems to be missing from architectural education. We were taught to adhere rigorously to regulations concerning accessibility, for example, but we never got to hear from a disabled person about those regulations. Rather, they were handed down to us as authoritative documents, a set of rules that we had to trust with no further explanation. This approach is also reflected in recent strategies to accommodate trans people in the built environment. There’s been a recent move towards creating unisex toilets, but I never saw any exploration of why that was necessary, or what the implications of this shift might be. People who have always fit a cisnormative conception of gender are divorced from the difficulties of trying to exist in these afterthought-spaces, and from the trauma of moving through an environment where your very presence can be a provocation. Changes so far have been piecemeal and of varying quality, with some public venues opting simply to change-out signage on existing bathrooms. Even so, recent initiatives like Stalled! have been attempting to standardise new ways of designing specifically gender neutral toilets.

Airport prototype for an all-gender restroom.

Architects need to be sensitive to how the spaces they design interact with complex and diverse groups, rather than performing a normative idealisation of how people should inhabit a space. Creating an awareness of how different people might inhabit architecture can only be a good thing, and centering this difference as one of the starting points for design seems vital for creating truly democratic architecture. This obviously extends far beyond my experiences as a transgender woman, encompassing intersections of disability, race and class, all of which are too often sidelined in architectural practice and education. But trans people exist on the margins, inhabiting public spaces contingently, with a consistent sense of otherness and threat. Bringing our voices and experiences into the discourse about the built environment is a vital step in tackling that marginalisation.

Joanna Parker
Joanna Parker is an architecture graduate and writer based in the north of England, with an academic background in philosophy.

All Design Is Political, Not All Politics Is Design