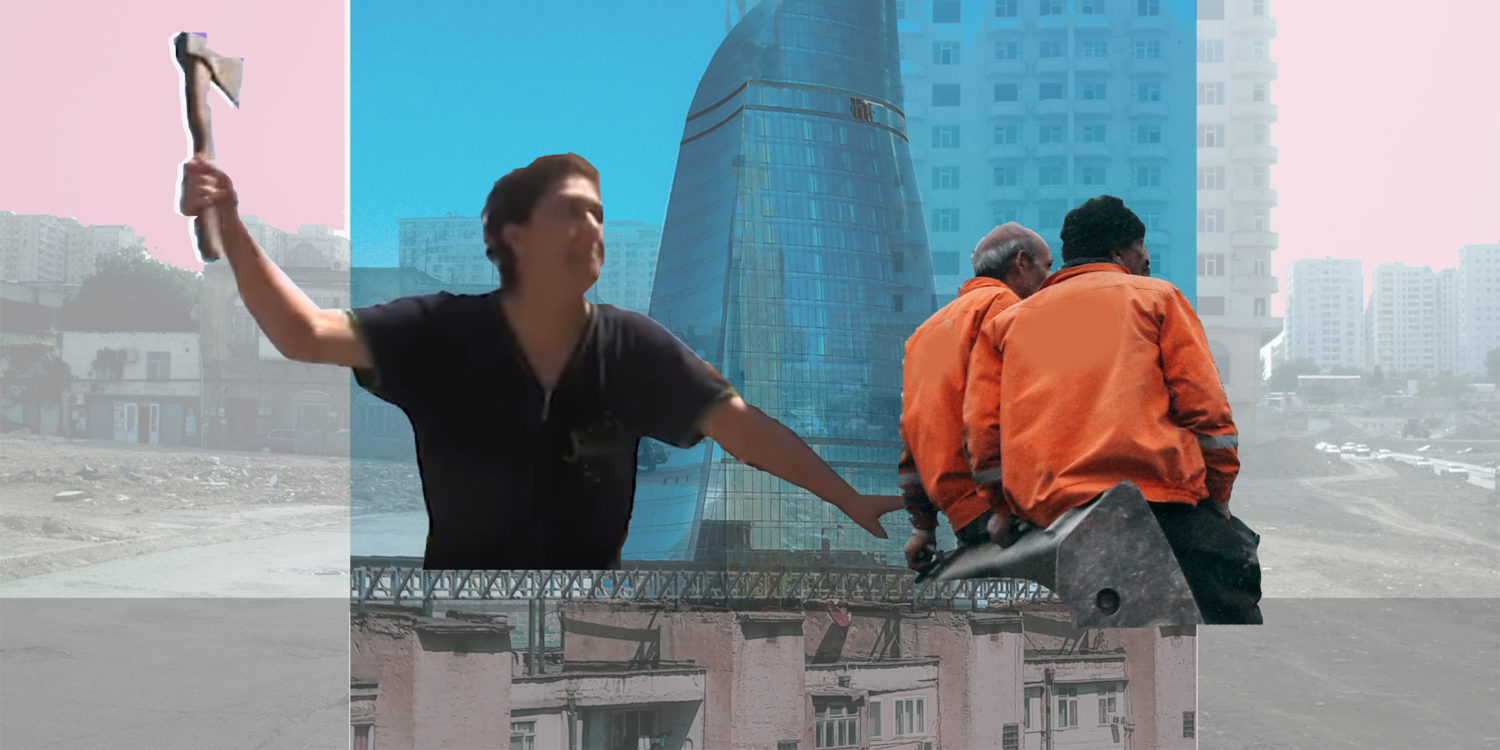 In the absence of formal channels to express their frustration, Baku residents facing housing demolitions have been directing their anger at construction workers. Instead, they should find common cause against a growth machine that harms them both.

Baku, Azerbaijan, 2013: A video emerges of yet another scene of forced eviction in Xutor, a neighborhood consisting mostly of shacks and self-built houses. The evictees complain about a lack of compensation. In despair one of the women among them attempts to stop the demolition by climbing on the tracks of the bulldozer with an axe and threatening to kill the operator before killing herself. She shouts that she is tired of her life and they can destroy this house only over her dead body. The woman clearly wants her voice to be heard and since the real forces behind the urban renewal projects — private developers and the state authorities —  prefer to stay behind the scenes, the bulldozer operator is the only person she can raise her voice against. The dramatic ending of the video, where the woman loses consciousness and falls off the track, is a brilliant metaphor for the fight of Baku dwellers against the so-called “growth machine”: that network of business interests and local politicians enriching themselves through a form of economic development that exclusively benefits their own interests. Not only that, it also demonstrates the puzzling confrontation between two equally exploited sides of Baku’s urban renewal: residents and construction workers.

The urban fabric of Baku has been dominated by the construction of skyscrapers, marble bridges and lavish architecture since 2007, after the country became flush with oil wealth in the early 2000s. Unsurprisingly, all this development, encompassing a panoply of starchitect-designed cultural landmarks, urban “beautification”, and infrastructure upgrades for global events such as the Eurovision Song Contest and Formula 1, involved barely any input from ordinary city dwellers, even though much of the urban renewal has required demolition of whole neighborhoods throughout the city, most of the time without fair compensation to the residents. In the peak of the oil-boom between 2008-2014, the state evicted up to 80,000 people from their houses. Urban space has become an arena for economic growth, and relocation of low income and marginalized classes outside of the city has helped to create a sterile and lush image of a “modern” city.

The so-called modernization of Baku is usually presented as a project of glory and global recognition, thus neither authorities nor private developers want anyone to meddle in the “ugly” side of the story.  The structure of urban governance, consisting of state entities led by individuals directly appointed to the post by the executive powers, leaves no space for feedback loops between dwellers and authorities. Due to strict control of public space, protest gatherings take place in front of the municipalities or executive power branches only in exceptional cases. Moreover, the state crack-down in 2013 on civil society has shrunk the civic space even further, limiting the number and operational space of watchdog institutions, which is why it is difficult to obtain more recent coverage of similar residents’ protests, or construction workplace accidents, even though they are certainly still happening. Indeed, while the crack-down has diminished possibilities for carrying out social surveys and participatory research, and has also adversely affected the quality and frequency of reporting in the country, the conditions causing resident unrest have only intensified.

The restricted space for opposition has also limited possibilities for organized opposition against the urban renewal projects. Small-scale neighborhood and household protests have still taken place in Baku, but they rarely morph into a movement that fights against deeper structural issues. Those individual households seen desperately fighting the bulldozers never found common ground with other grassroots initiatives, instead remaining mostly confined to their immediate living environments and property. 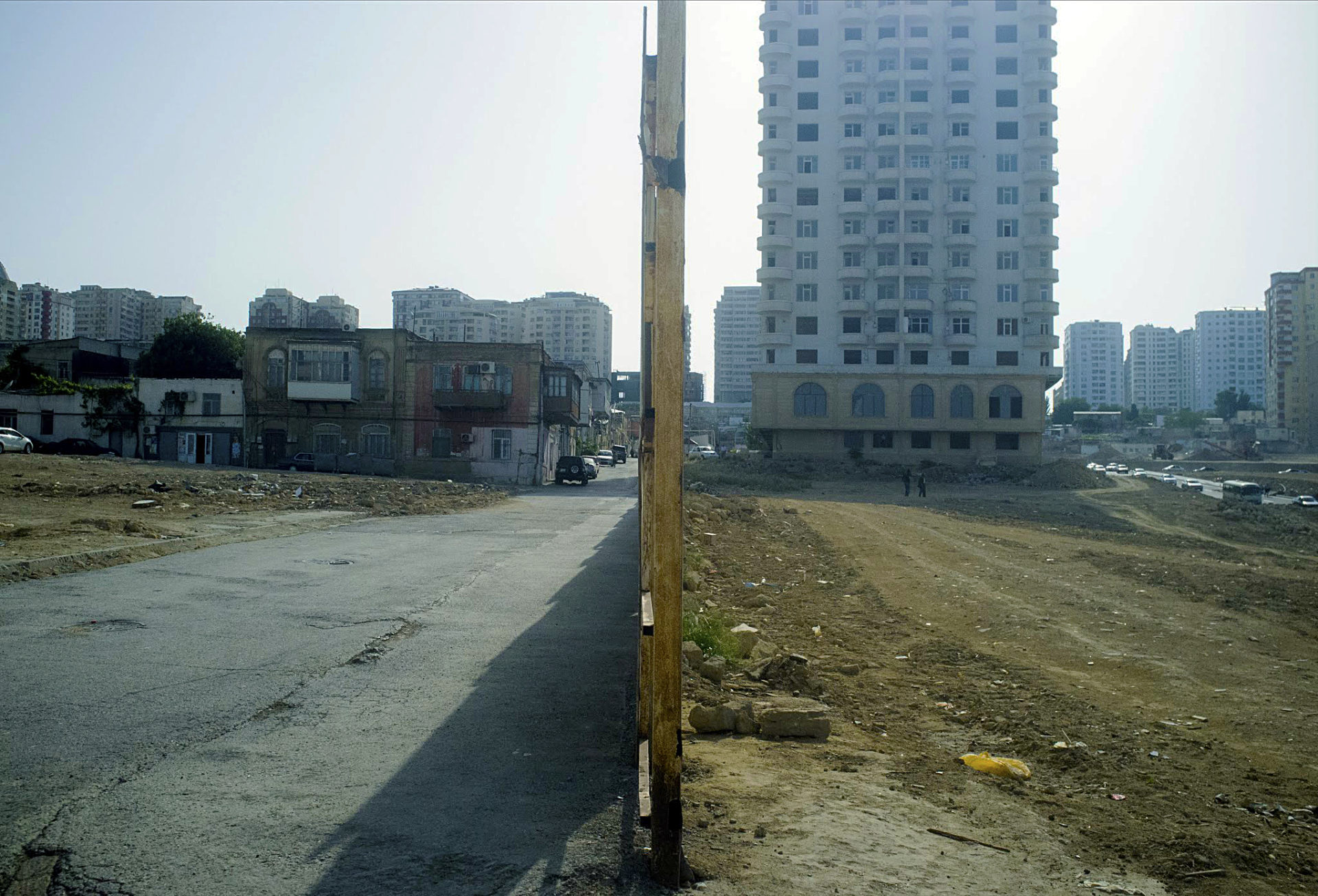 This echoes the analysis of Peter Marcuse and David Madden in their definitive study into the conditions of housing under capitalism In Defense of Housing. In the book, they explain that individual households tend only to act against immediate emergencies like evictions, rent increases or a catastrophe: “A household fights eviction, wins a long-term lease, and loses much of its incentive to keep fighting on less pressing issues. This is a problem for housing movements, even as it also fuels them.” Madden and Marcuse have pointed out that attempts to overcome the challenge of organising more long-lasting coalitions , housing groups tend to form and re-form coalitions with activists working on other causes, such as feminist, public health, LGBTQI+ issues, when the problem of housing becomes relevant to their field of advocacy as well.  This certainly goes for Baku, where activist groups working on other issues in the city have tended to overlook the relevance of the housing question to their more immediate concerns, and also because those groups mostly prefer to have a less visible political agenda for the sake of personal safety.

In the rare cases where activist groups do mobilise to fight evictions in Baku, we see the same confrontation with construction workers, rather than those responsible for the eviction. For instance, a video from Salaam Cinema shows that, while trying to protect a historical building in central Baku from demolition, the cinema’s co-founder, Leyli Gafarova, asks the construction workers to have an independent opinion and stance and not simply do what they are told to do by their bosses. Someone else from the crowd says that “those who demolish this building today, could also demolish your house tomorrow”. In response, the construction workers say that they just came to earn a loaf of bread. While interviewing Leyli for this article, she explained that, for her, the moment of confrontation with the workers was an attempt to include them in the resentment against demolition. But it was not her first interaction with the construction workers working for the private developer who owns the building. Parts of the building where Salaam Cinema is located have also been used by the construction workers as a storage space and they usually tend to spend a lot of time there. Leyli interacted with many of them at that time and knew that most of them were working for minimal pay and without a proper contract. 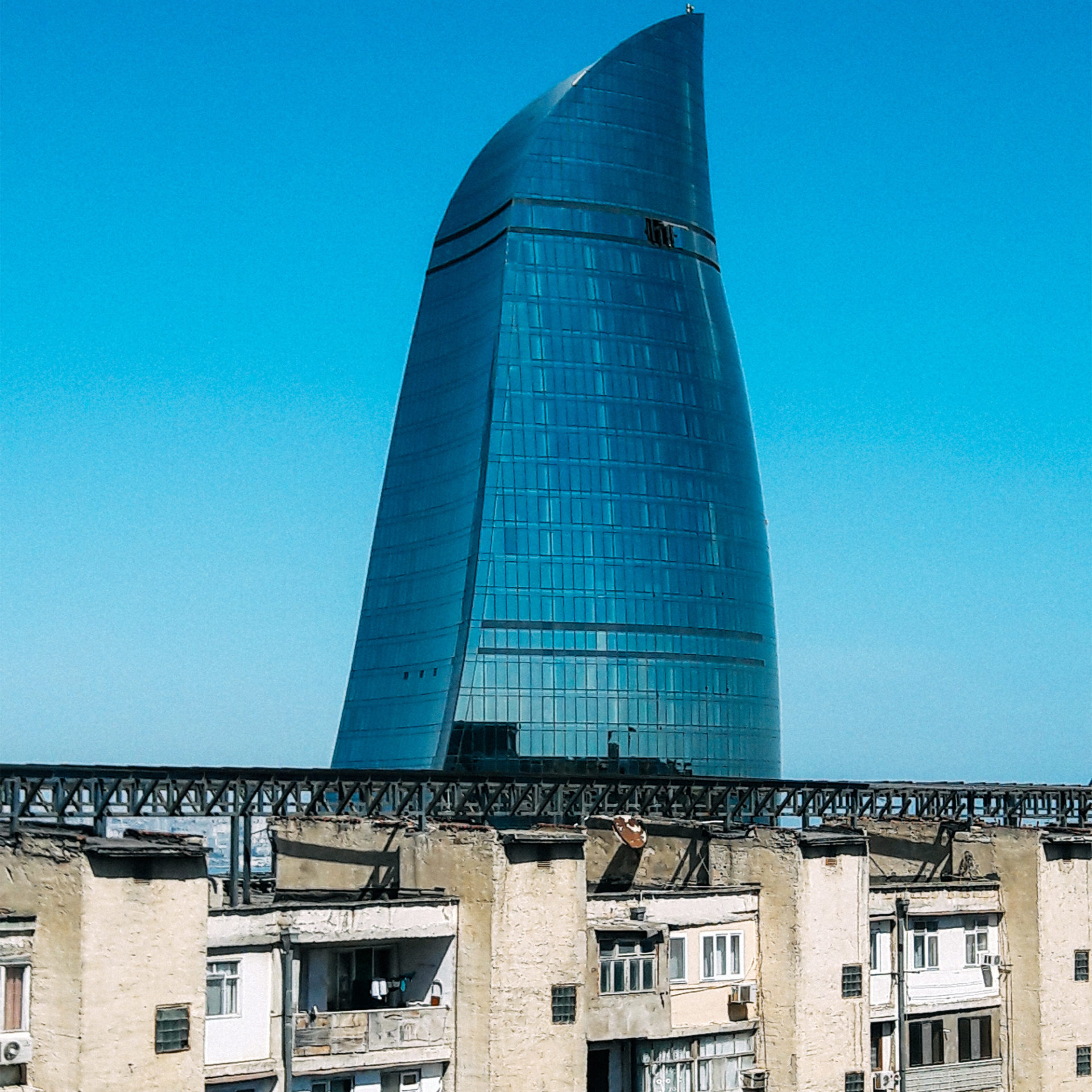 Designed by architects Hellmuth, Obata + Kassabaum the Flame Towers have become a symbol of modern Baku.

The precarity of construction workers goes beyond dangerous conditions at a workplace. In Baku, places known as qul bazarı (“slave market”, if translated literally) still continue to operate as one of the main job sources for construction workers. Qul bazarı do not exist as a structured market place, but are named to define several streets and areas across the city, where construction workers gather in anticipation of being picked up for daily tasks. While it’s usually odd jobs within private households, construction work is also often on offer. Given the daily nature of their work, this group of construction workers receive a particularly meagre payment, and of course, no job security and very little certainty about when and where their next income opportunity might be. Most of these workers live in shared rooms, sometimes with more than five roommates, trying to divide their income between meeting minimal living costs and sending some home to their families in rural areas. It is little surprise, therefore, that their response to residents’ accusations of being immoral and shortsighted is that they only came to the site “to earn their bread”. 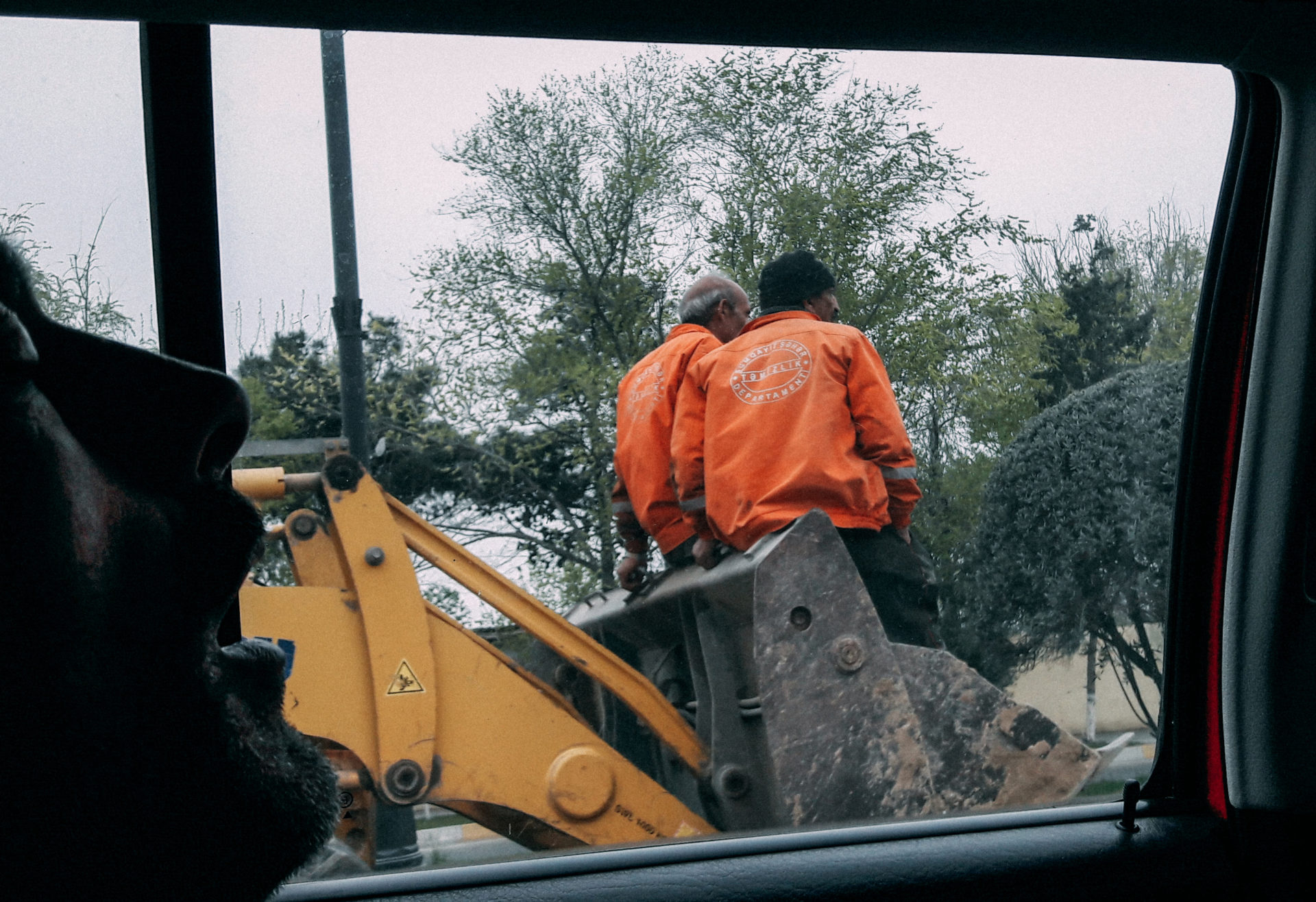 Despite being the backbone of the urban redevelopment projects, construction workers have very limited capacity to improve their job security, income stability and safety conditions. It’s interesting that Baku’s development model is often compared to Dubai, but rarely is the similarity in conditions of construction workers mentioned in those comparisons. The construction workers who build the luxury skyscrapers and tourist attractions in the center of the city, live in very exploitative conditions on the outskirts, and they receive minimal compensation, with little job security. The current political system in Azerbaijan provides no empowerment mechanism for construction workers and no space for them to unionise or even contest the mechanisms governing their situation.  Although there is an official  “Construction Work” labour union, its existence appears to be largely symbolic. When researching their activities, the union’s activity seems limited to the annual celebration of the Construction Workers Day on April 10.

The total lack of accountability authorities and private developers face has created a space for confrontation between two of the most exploited groups in Baku’s urban transformation.  The idea that a woman would jump onto a developer’s car and threaten them with an axe in protest at their role in demolishing her house is scarcely imaginable. First, residents would simply not be able to identify the guilty developer due to a law which gives anonymity to beneficiaries of private companies. Second, the power imbalance between the residents and forces of urban renewal is so huge that they wouldn’t be able to carry out similar acts against them on an individual or basis. The same goes for construction workers: they would first need to address more immediate matters like decent pay and conditions before they could confidently challenge their employers’ development ambitions. Even if these two groups got their act together to bargain collectively with the authorities over their demands and rights, there’s still no guarantee that the city’s urban renewal and construction projects would slacken their pace. And yet, one thing that is clear is that their interaction up until now has helped the Baku’s growth machine in its utterly complacent regeneration of the city’s urban fabric.

In a time of demolitions, when tensions on the ground are high and opportunities for organised collective action limited, perhaps the most constructive way forward is to create discrete lines of dialogue between the two exploited groups. Conversing on the topic with the most networked people in the neighborhoods that are most at risk and trying to spread awareness on the issue among residents would also be a good start. In this pursuit, visual arts and storytelling could serve as a basis for fostering exchange. Separate from that, the architectural profession needs to start condemning the behaviour of firms like Zaha Hadid Architects, Foster + Partners, HOK who have yet to shy away from taking commissions in Baku, despite the terrible record of neighbourhood demolition mentioned here.

Nazaket Azimli
Nazaket Azimli is an urbanist and researcher based in the Netherlands. She is a Placemaking Europe Leader and currently focuses on questions of housing, environmental justice and collective action.