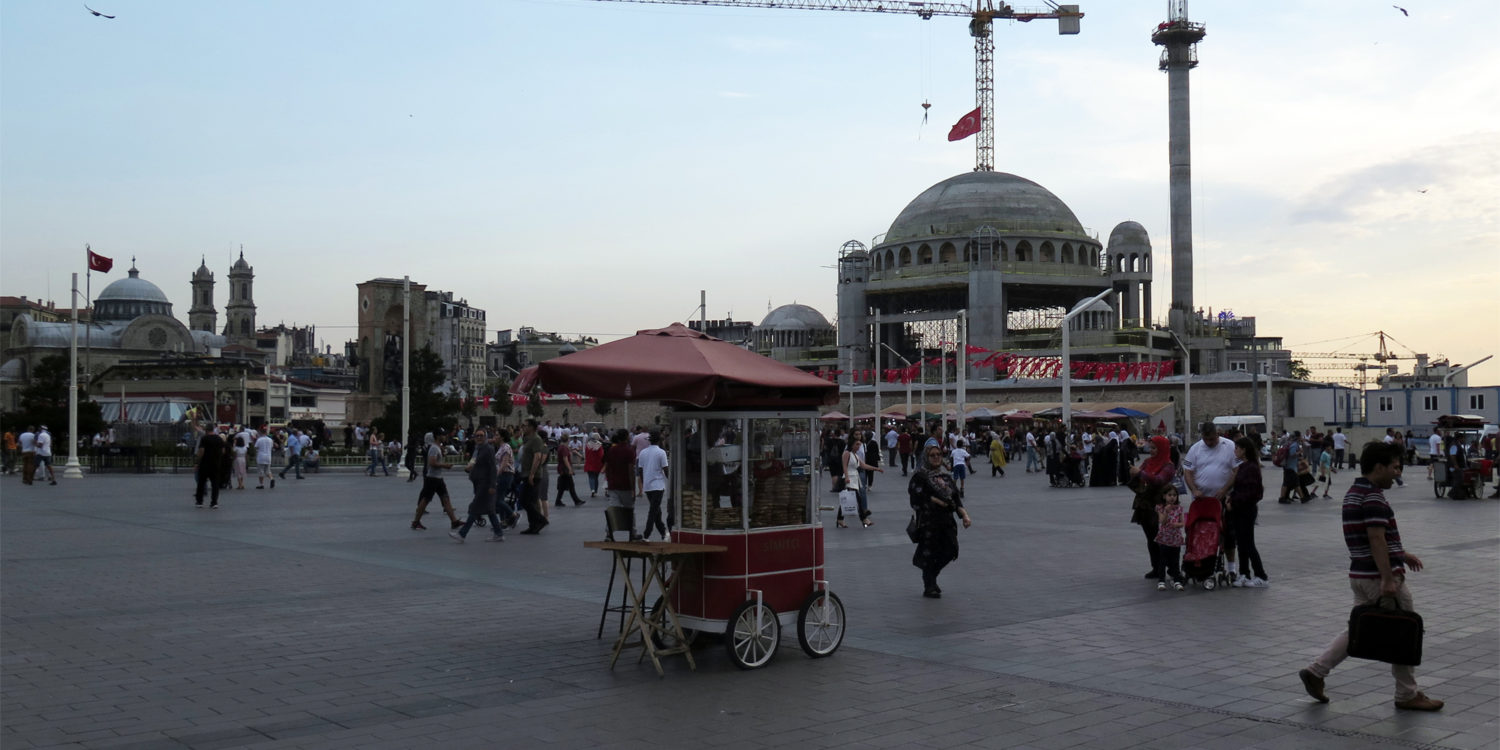 Taksim Square's pivotal role in Turkish political life has led to constant redevelopment throughout its history, yet its complex and always contested everyday character has always challenged these top down designs.

“Scream out as much as you want, rant and rave: we destroyed it”.

With these words, Turkish president Tayyip Erdoğan announced the demolition of Istanbul’s Atatürk Cultural Centre (AKM) in Taksim square, the heart of the city.

The AKM symbolized the secular, modern, more westward-looking character of republican Turkey and its Kemalist elite: a social stratum whose political and cultural dominance has been eroded under the Justice and Development party (AKP) regime. As clouds of dust arise from the bare bones of the AKM, the new Taksim mosque is rapidly rising across the square’s shapeless expanse. Its concrete domes and minarets taking shape among cranes and construction workers working around the clock. In its predictably neo-Ottoman design, the mosque represents the concretization of a highly divisive, decades-long project demarcating the Islamization of a space which was previously an urban manifesto of secular Kemalism. 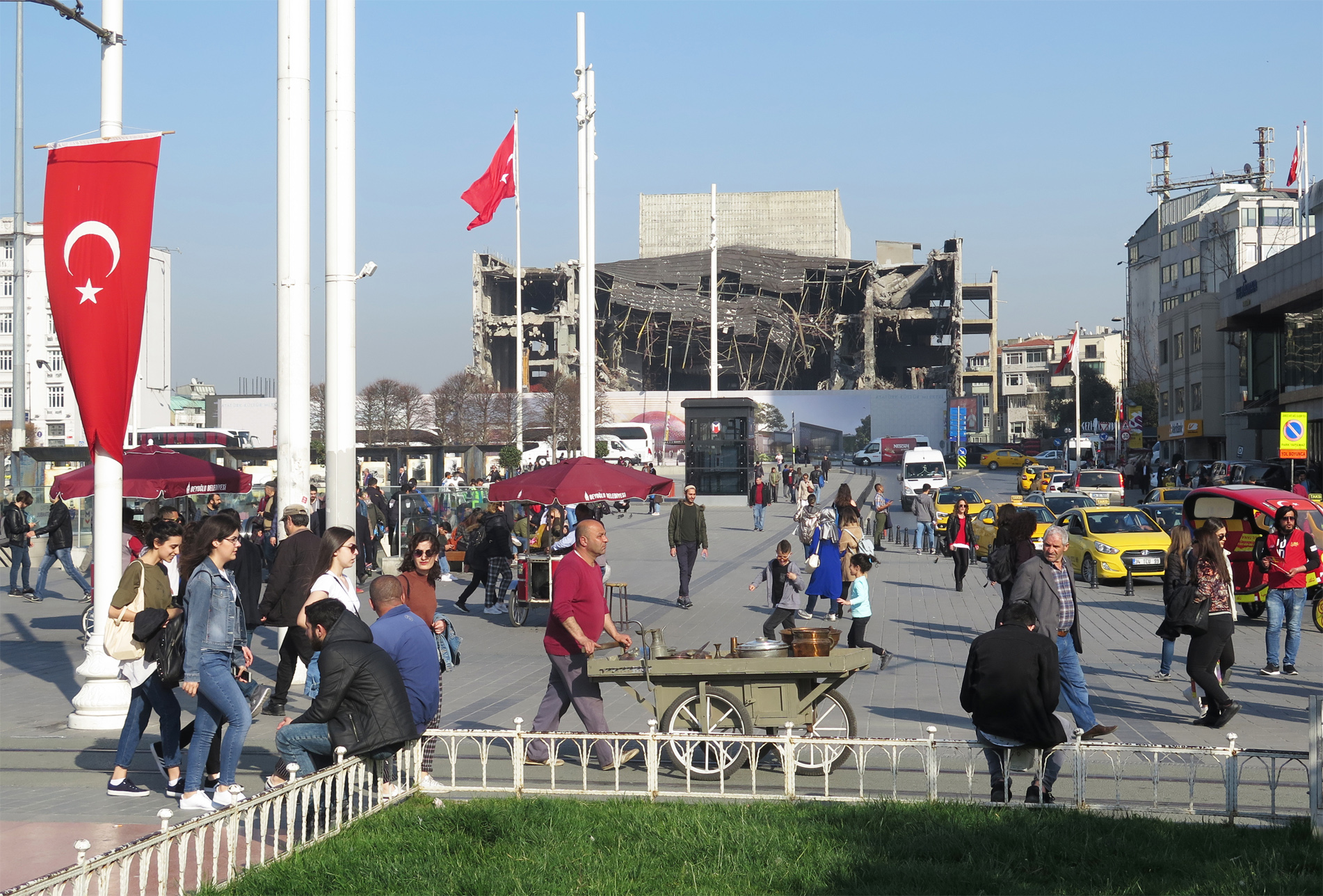 Despite being listed as a heritage building, the AKM was deemed obsolete and beyond repair after more than a decade of uncertainty and inactivity and will now be rebuilt and expanded. 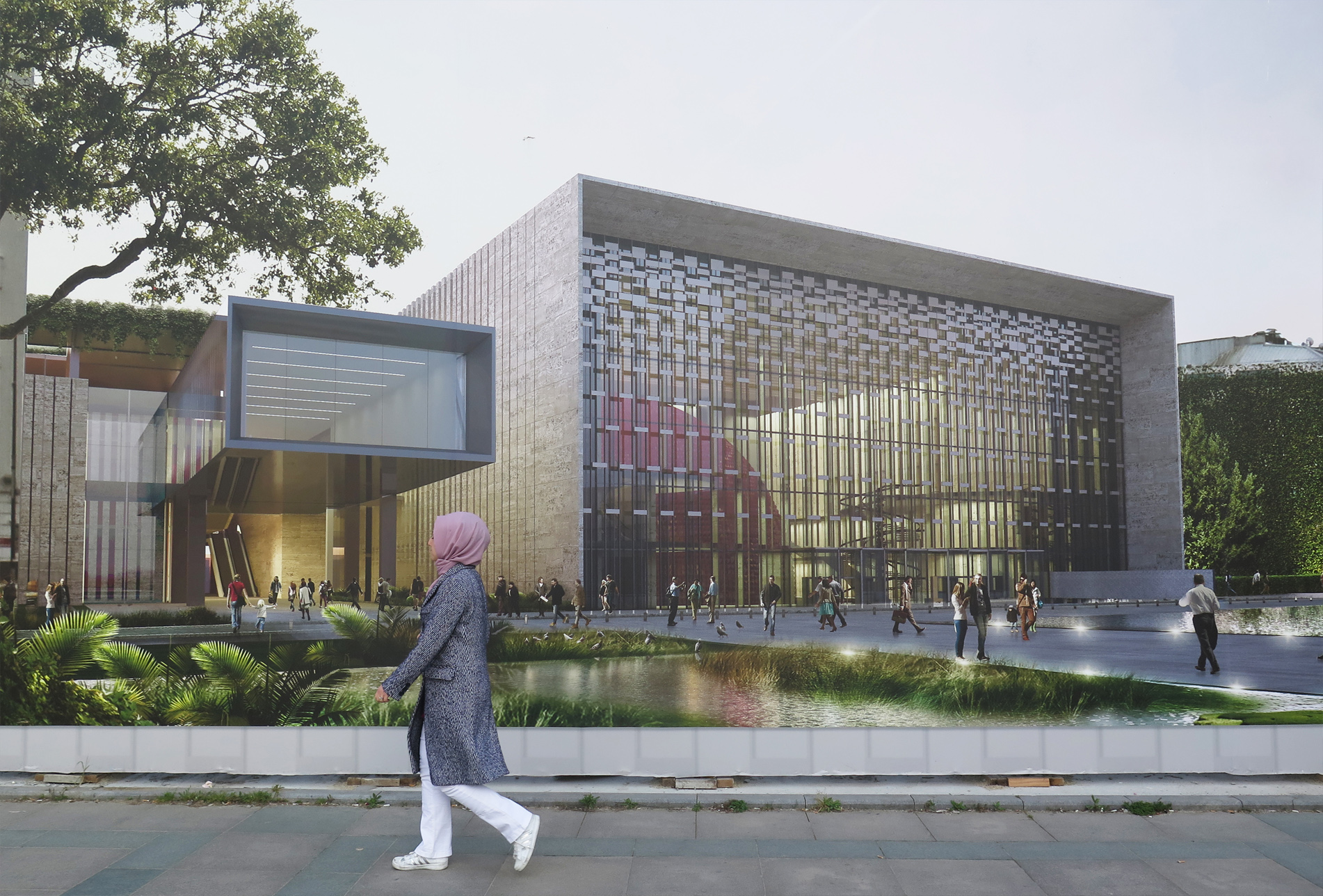 The rebuild will incorporate a replica of the AKM’s iconic façade and, most crucially, a new programme and contents.

This spectacular and carefully choreographed transformation is happening at a time of intense political change and deep social polarization in Turkey. The country has shifted from a parliamentary system to a highly autocratic presidential one. Today, the Taksim makeover is an incendiary issue and Erdoğan’s acrimonious dismissal of public opinion neatly captures the divisive atmosphere in which the works are being carried out. Reactions range from the disheartened anger of those who swear they will never set foot in the square again to the confident smugness of those arguing that it’s about time a mosque was built in the main square of a Muslim majority country. And whereas the politicized Chamber of Architects (TMMOB) calls the AKM demolition “a crime”, the president gloats over the square’s refashioning. Amid this heated debate, it’s worth taking a more lucid look at the Taksim transformation, particularly in light of its changing role in Istanbul’s social and urban fabric. What emerges is a picture of a public space wherein constant redesign and physical changes have always struggled to inhibit its complex and always contested everyday character. 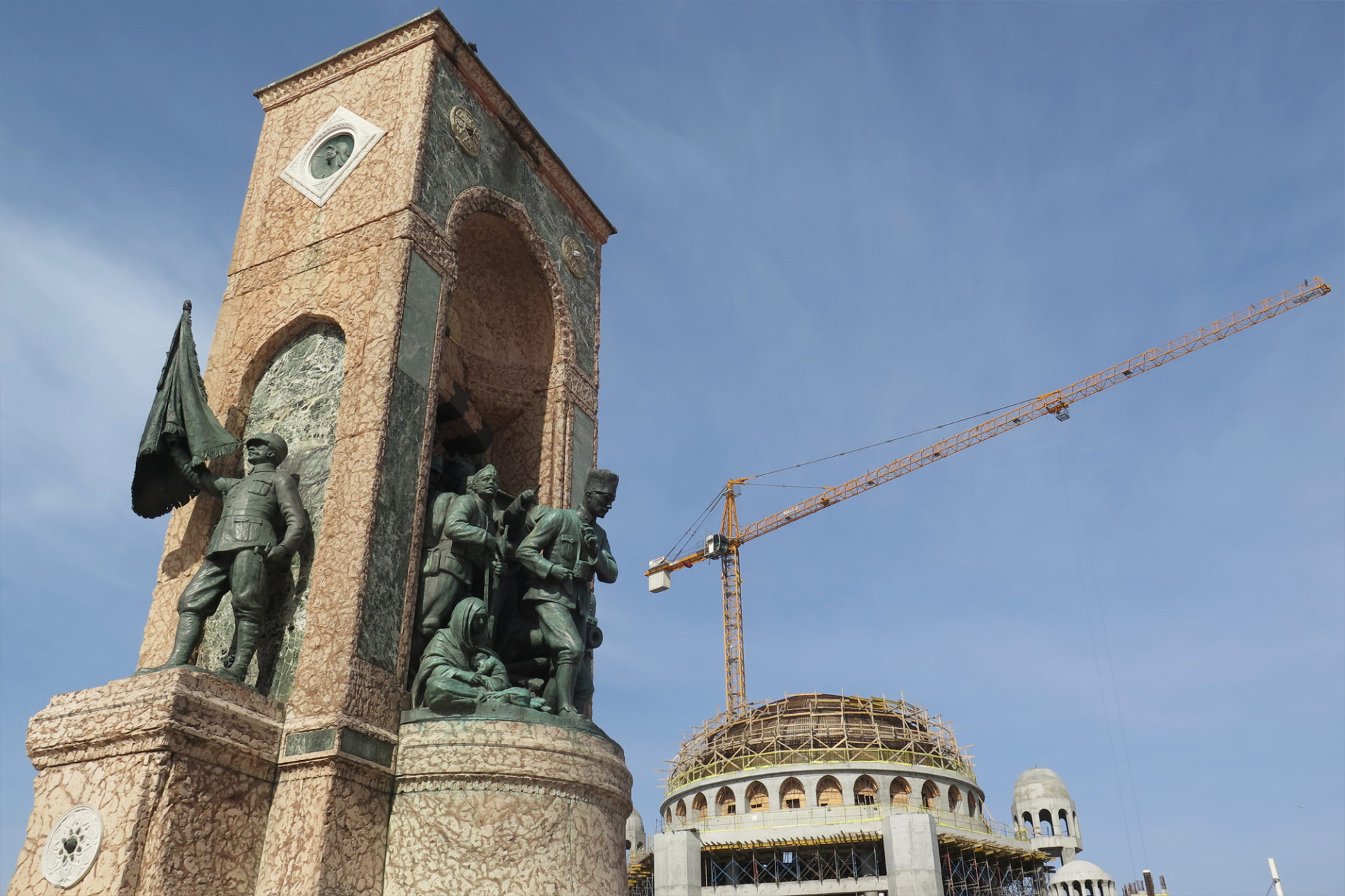 The founder of the Republic, Atatürk, on the Republic Monument, the centerpiece of Taksim square, now overshadowed by the new mosque.

Since the demise of the Ottoman Empire and the foundation of the Republic, Taksim has represented the archetypal space of modernity in Istanbul. The square was chosen as the new symbolic centre of the city also because of the absence of religious symbols related to the Ottoman-Islamic past: the area of Beyoğlu – where the square is located – was indeed a non-Muslim majority area. By shifting the new civic centre to Taksim, the secular Turkish regime was not only positioning itself away from a cumbersome urban legacy, but also appropriating and Turkifying a mostly non-Turkish space.

In the following decades, Taksim expanded and contracted continuously as subsequent administrations added and subtracted elements, striving to leave their mark on its space. The Talimhane military parade ground was built up and turned into a dense neighbourhood, while the monumental Ottoman artillery barracks were demolished and replaced by the tree-lined Inönü promenade now known as Gezi Park – whose marble steps feature old gravestones from an Armenian cemetery which have disappeared as the city expanded around Taksim. 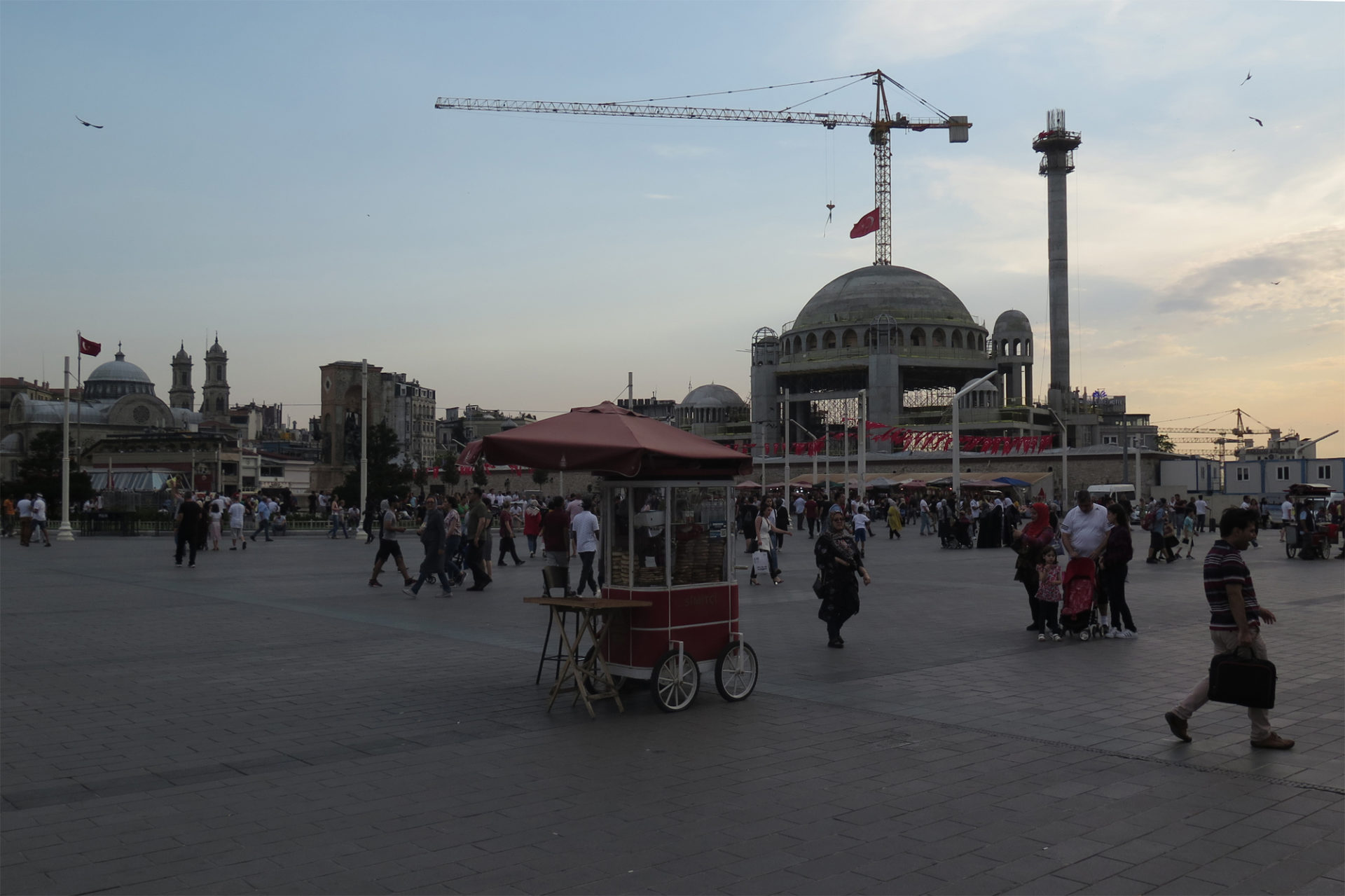 Even today, one of the more prominent buildings in Taksim’s ramshackle profile is a Greek Orthodox church (on the left).

A massive plinth which would have supported a statue to Kemalist leader Inönü lay empty for years as the opposing parties came to power, finally being removed. Later on, as the famous western-style Kristal Casino was torn down, the imposing Atatürk Cultural Centre came into being over more than two decades: with its glass curtain wall façade, it immediately became the square’s defining landmark, until its destruction by a controversial fire a year after completion. By 1978, when the ACC reopened, the monolithic Intercontinental Hotel had risen over Taksim. A year before the reopening, on what came to be known as the Bloody May 1st, snipers positioned on the hotel’s roof and on another building opened fire on the crowd rallying in the square. Dozens were killed in the ensuing mayhem. In the following decades, hundreds of buildings were torn down in the old Greek-Armenian neighbourhood of Tarlabaşı to open up a major thoroughfare flowing into the square, while the metro works provided the chance to get rid of another monument built by the military junta in the 60s.

More recently, Taksim played host to the shattering of the so-called “Turkish model” – a mixture of authoritarian democracy, liberal economics and social conservatism – in what came to be known as the Gezi riots, or June Resistance. Arguably the most important upheaval in Turkey’s modern history, the protests were sparked by the AKP government’s plan to bulldoze Gezi Park and build a replica of the Ottoman barracks as a shopping mall. Anti-government demonstrators clashed with security forces for weeks over control of the square and during the protests the facade of the idle AKM was transformed into a massive protest screen by different groups of demonstrators, and Erdogan declared: “God willing, we will tear it down”. The government reaction to Gezi marked the beginning of the shift from soft to hard totalitarianism in the country. The barracks, for now, have not been rebuilt, but the pedestrianization of the square has been hastily carried out with the realization of a traffic underpass. 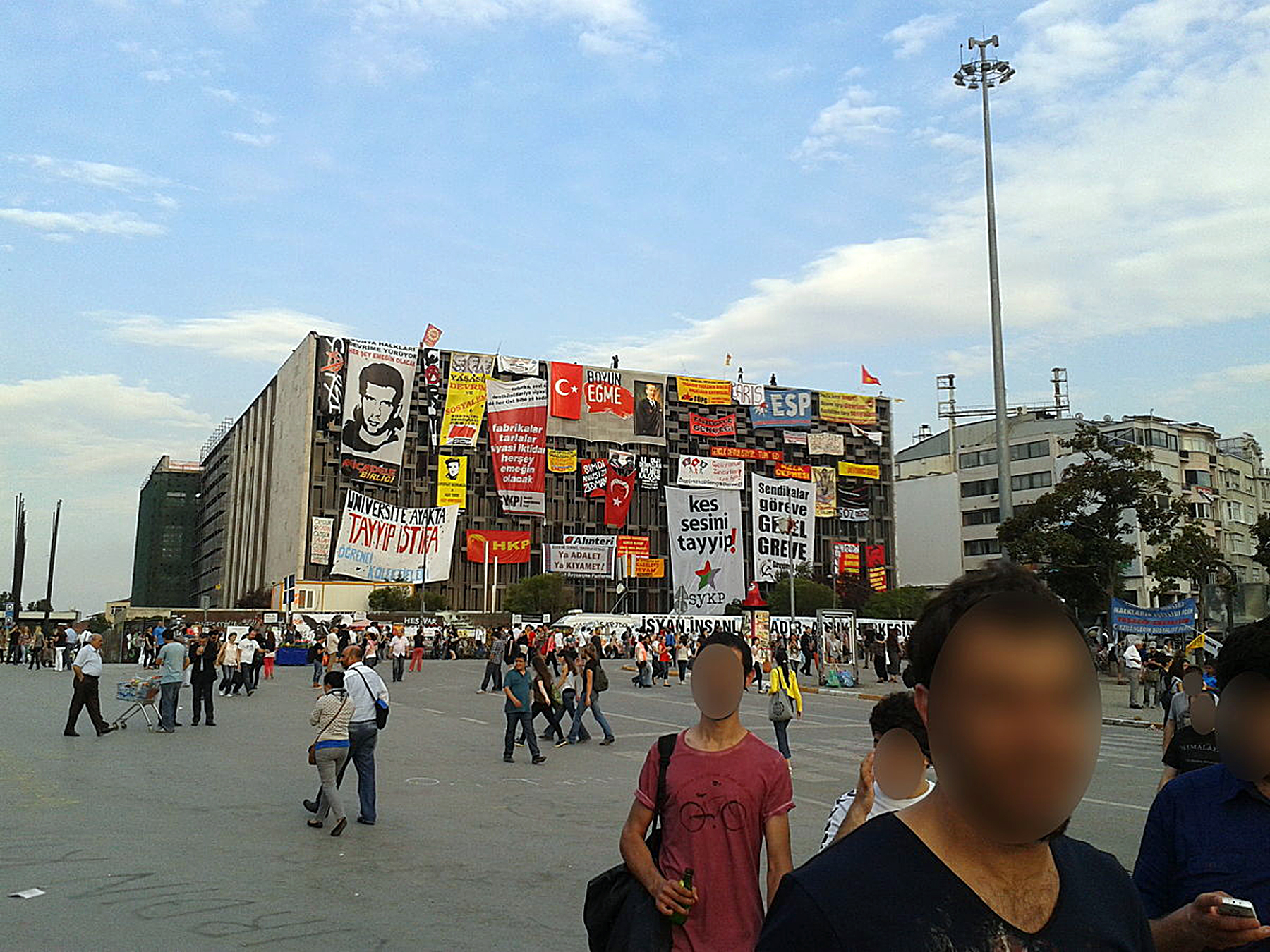 On May 30th 2018, the day the AKM demolition was completed, a few hundred people gathered in Taksim square to commemorate Gezi’s fifth anniversary, looking on as bulldozers cleared out the rubble from heavily patrolled square. Erdoğan’s “rant and rave” remark was aimed at them, the Gezici: “those of Gezi, who made a big fuss about the AKM” – those sectors of society who fear Taksim is going to become the dystopian scenography for Erdoğan’s New Turkey. By contesting the demolition and defending what the AKM stood for, the Gezici also stand against the president and his AKP’s 17-year rule.

Without playing down the resonance across Turkish society of these current parallel processes of construction and destruction, it is important to highlight that the current transformation is evidently no exception to Taksim Square’s century-long history, however theatrical and dramatic this current scenario may seem. Rather, it is the latest development in a long tradition of highly politicized top-down urbanism. As a central space deeply imbued with the symbolism of state power, however, Taksim has always also been the stage for counter-representations, confrontational pledges and divergent identities.

This is something that manifests both as explicit contestation and in more subtle everyday practices. Indeed, as Taksim has evolved spatially through the decades, its essential character has remained unaltered. Beyond or beneath the state rhetoric that has attempted to impose some grand narrative on the square, Taksim and the surrounding district of Beyoğlu have always been a heterogeneous public space, where different identities and classes cross each other: youngsters, students and night revelers flocking to the area’s endless bars and alternative hangouts, civil society activists from the associations headquartered around the square, transgender sex workers living nearby and working in the backstreets, migrants settled in run-down slopes towards Dolapdere, Roma women selling flowers, not to mention the many shoppers and tourists attracted to this already heady urban mix. Besides being Istanbul’s pop epicentre, Taksim is a byword for oppositional politics, counterculture and pluralism. In other words, the experience of life on the ground disrupts official rhetoric, be it Kemalist or Islamist.

It is this particular character which is under unprecedented pressure nowadays. President Erdoğan has declared that “Beyoğlu’s marginal people” will be tolerated, so long as they “behave properly”. Otherwise, he threatened, “we’ll take them by their ear and throw them where they belong”. And so, besides the concern for the destruction of an icon of Turkish high modernism or the aversion for the construction of a religious Islamic building in a historically non-Muslim, secular neighbourhood, we should look beyond the high-profile architectural projects reshaping its landscape and grabbing widespread criticism and towards the level of street life. For it is here that the most radical change may be happening and where we find worthy, low profile examples of resistance to such change.

“Taksim is gone”, you will hear from many disheartened Istanbullers these days. “Who goes out in Beyoğlu anymore?” The bombs season – which approximately lasted from the June 2015 elections, where the AKP lost its parliamentary majority, to spring 2017, when Erdoğan pushed sweeping constitutional changes through a referendum – seems to be over. But Taksim has yet to recover. In spring 2016, a bomb exploded right on Istiklal street, killing five passers-by. After the attempted coup in July that same year, a so-called “Democracy Festival” was staged in the square, a month-long pro-government rally where free meals and transportation were provided, through which the AKP asserted its control over the space – with the AKM façade entirely covered by a gigantic Turkish flag banner reading “Sovereignty Belongs to the People”. Taksim is actually still very crowded, but its composition has changed dramatically. As regulars started deserting the area under intensified pressure from the police and local mafias, as well as rising rents and alcohol taxes, several hangouts and associations have closed down or relocated. With suspicious timing, government-friendly bars, teahouses and associations have opened up in oppositional-friendly areas, some even cropping up exactly where opposition groups used to gather. Meanwhile, rising numbers of Middle Eastern visitors, notably petrodollar-rich Gulf Arabs and Iranians, and an influx of Syrians who found work catering to them in newly opened outlets and malls, have also altered the character of the area.

The square is now heavily patrolled night and day by security forces. Almost any oppositional demonstration is banned or, if it somehow manages to go ahead, quickly and violently suppressed. According to Erdoğan, demonstrations should take place in the gigantic “Rally Area”, a landfill built in the Marmara sea at Yenikapı, which only hosts pro-government rallies. Meanwhile, the administration is busy filling up the gigantic wasteland that Taksim has become with propaganda events, pro-government festivals, and literally anything from Ramadan tents to jump-on platforms.

Taksim is changing dramatically, as it always has. But its history shows us that however pompous and theatrical government urban restructurings may be, they are anything but permanent. Nowadays, however, there is a clear attempt not only to reconfigure Taksim as a physical space, but also reengineer its social fabric. It is crucial, therefore, to support all those who cling to it: the “Saturday Mothers” and queer activists who resolutely keep gathering to protest despite bans, tanks and teargas; the many oppositional hangouts, bars, cultural centres and associations which still resist closure; likewise, the many inspiring small-scale examples running against the tide, such as Kuçe, a women-led food collective which opened its doors in a backstreet specifically aiming at creating an anti-authoritarian outpost in Taksim;  the Hayata Sarıl eatery, which provides employment to marginalized people and free meals to the homeless; and also Anahit Sahne, a music venue named after Madame Anahit, an Armenian street musician who used to play in Beyoğlu’s streets.

In bleak circumstances, even going out in Taksim becomes an act of defiance for the non-aligned population. So, this is a call to everyone who opposes this authoritarian conservative government: come to Taksim and don’t let it go. Istanbul needs its open, chaotic, undisciplined heart, now more than ever.