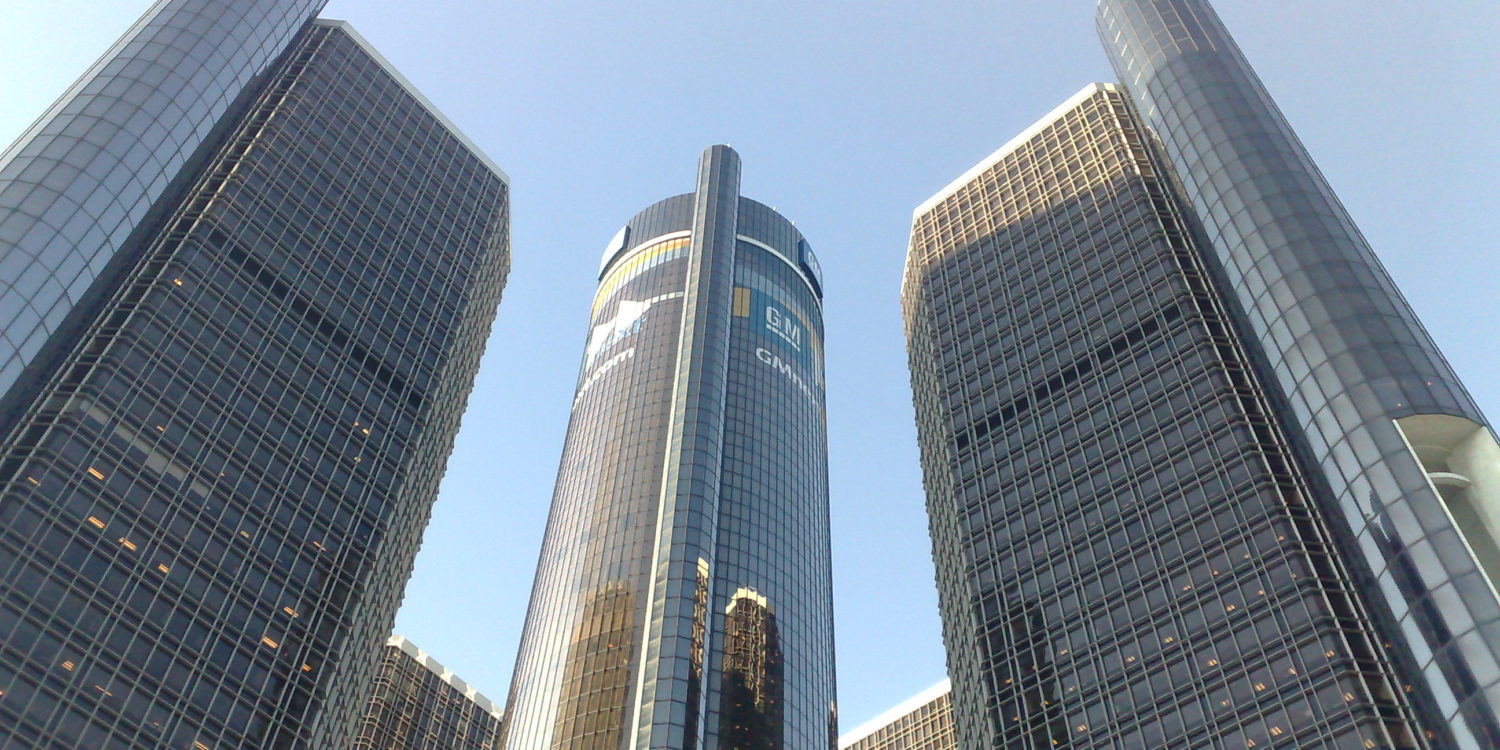 The Renaissance Center is one of the world's largest office complexes and Ford's failed attempt to revitalize the city center.

French filmmaker Florent Tillon’s 2010 documentary Detroit Wild City (Detroit ville sauvage) offers a poetic portrait of the dystopian ‘Motor City’ where ‘grass is growing in parking lots’ and building after building is crumbling apart. The film shows suffocating images of the Renaissance Center, one of the world’s largest office complexes and Ford’s failed attempt to revitalize the city center.

Luckily, the entire documentary is available (for free) on Mubi. We made a transcript and some film stills of the scenes dealing with the Renaissance Center, which is introduced by a nameless (?) expert who gives an instructive overview of the many architectural flaws that turned the complex of buildings into a fortress. 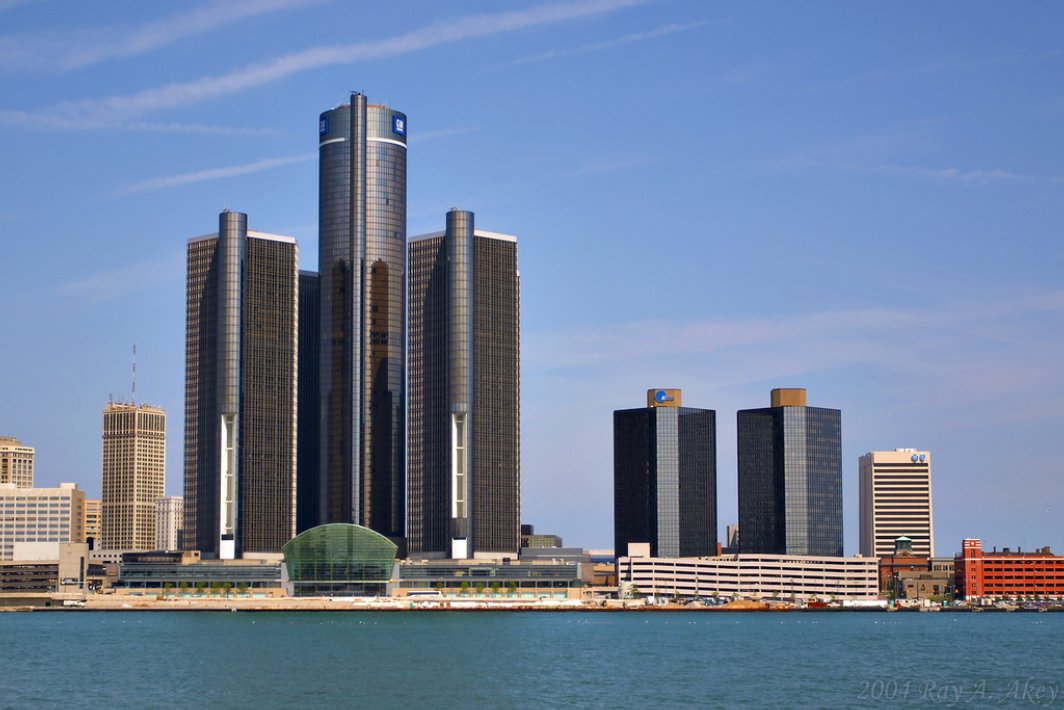 Renaissance Center as seen from Franklin Street by dnj_Brian

“The Renaissance Center was built in 1977 And when it was completed it was the largest privately financed project in the history of the United States. Over 350 million Dollars of private funds were used to built this 73 story main tower with four 44 stories towers surrounding it. Henry Ford II was trying to bring a renaissance back to the city of Detroit, but it really didn’t work as well as he planned. Instead of bringing lots of companies back to the city, he ended up pulling companies from other buildings in the city of Detroit and leaving them abandoned.” 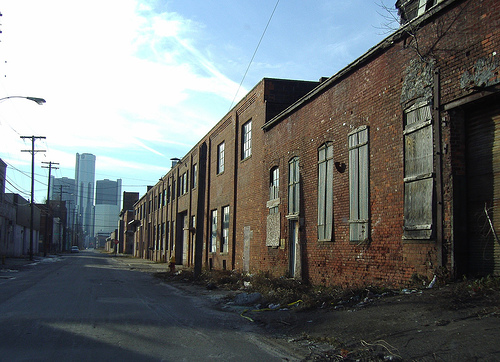 “Also it was being criticized for being very fortress-like in that it not really integrated itself into the downtown area. It was more like city onto itself, including what is now (car manufacturer) General Motors world headquarters, a 1500 room Marriott Hotel, over 70 different restaurants and shops, a movie theater, a post office, its own YMCA workout facility, and it even has its very own zip code.”

“And there was no front entrance to the Renaissance Center. There were large heating/cooling berms, which added to the fortress-like look of it and really kept out people from the city. And people would just drive in, go to work, and drive back out and never have to interact or feel like they were in the city of Detroit.” 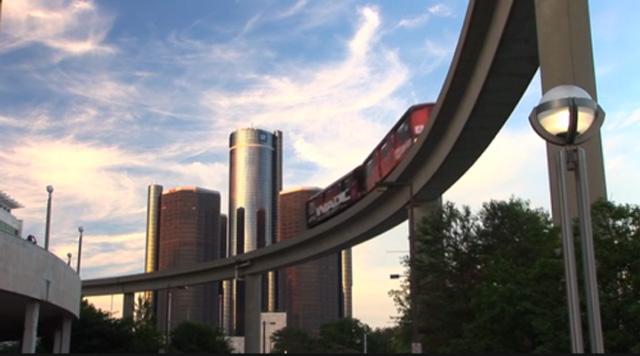 “The Renaissance Center is one of the main stops on Detroit’s People Mover. It’s what we call our ‘elevated rail system’. It’s a very small elevated rails system that stretches 3.1 miles around the downtown central business district, that has 13 stops and was created in 1987 with hopes of going farther, but that was never realized.” 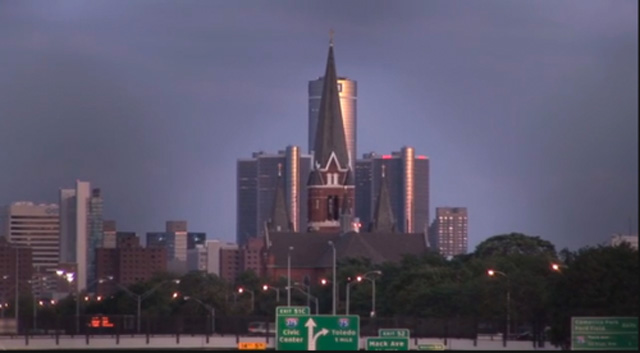 “St Joseph’s Church with its three towers lining up precisely with the Renaissance Center’s towers. Its a reminder of the battle of opposing forces in Detroit, on the one hand the industry, the corporate culture, and the idea that big steal and glass skyscrapers will fix everything and this kind of poor struggling church in the neighborhood on the other hand.”