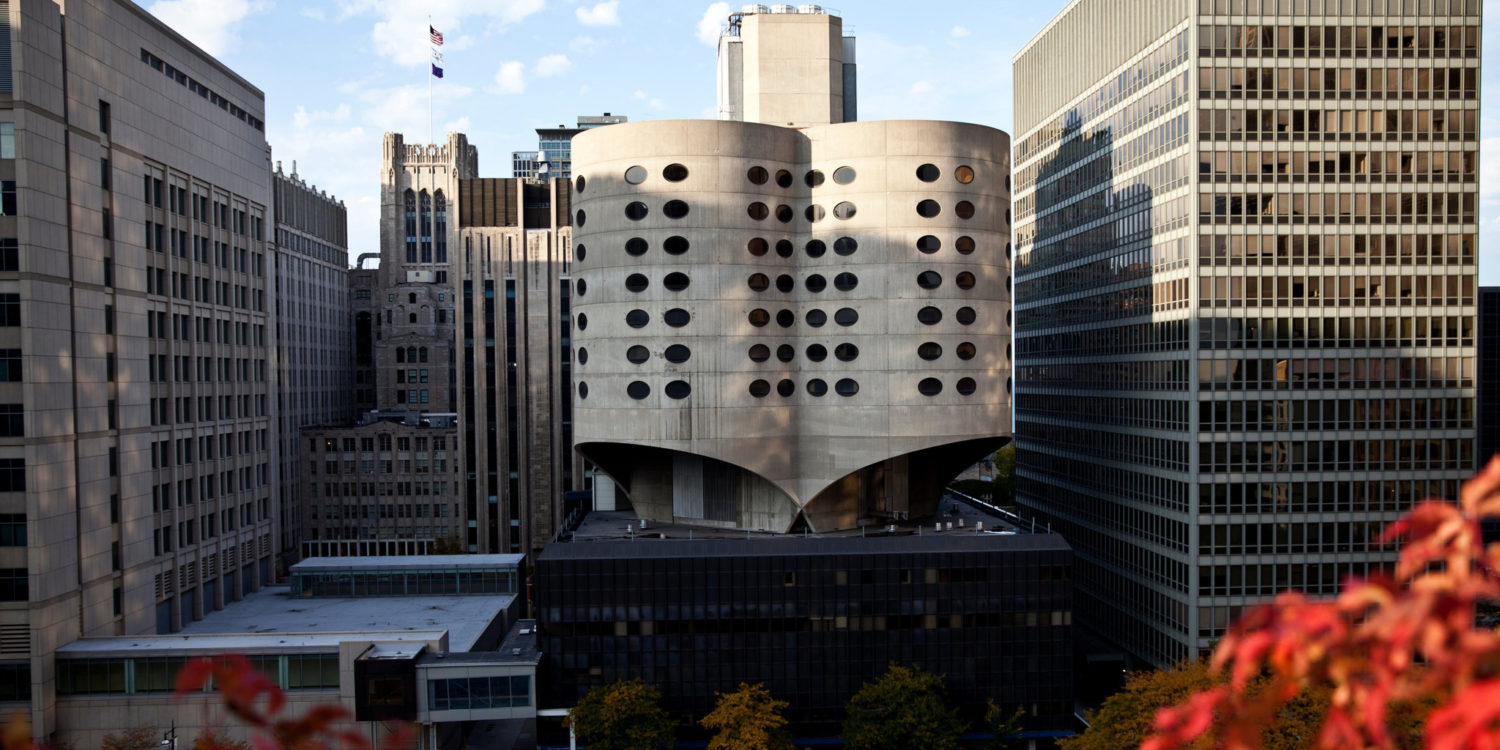 The Absent Column is a documentary about the battle for preservation and ultimate approval for demolition of Prentice Women's Hospital in downtown Chicago. For FA, Alexander Doerr interviewed filmmaker Nathan Eddy.

share this article
The Absent Column is a documentary about the battle for preservation and ultimate approval for demolition of Prentice Women’s Hospital in downtown Chicago. In recent months, the film was screened at several festivals, including the Architecture Film Festival Rotterdam and the New York Architecture and Design Film Festival. It premieres online today. For Failed Architecture, Alexander Doerr interviewed the director, Nathan Eddy.

Alexander Doerr: Did you know Prentice had been approved for demolition before starting the film, or was this a development that occurred while you were filming?Nathan Eddy: The demolition permit actually happened towards the end of when we were filming. When we were going through the process of making the film, it was up in the air and it didn’t look good. It seemed that things were tilting in favor of North Western University, and that it was going to be demolished, but then the preservation board decided to landmark the building and then right away turned around and reversed the decision. So it kind of became a farce. When we decided to make the film, there was still a chance that the building was going to be saved, and all the preservationists we talked to kept using the word “hopeful” which turned out to not be the case.

AD: At one point Prentice was supposed to be landmarked, saving it from demolition, but because of bureaucratic “shuffling” at City Hall, never achieved such status. Someone of course, makes money from the demolition and reconstruction of Prentice which highlights the interconnectivity of real estate, politics, architecture and preservation. Do you think there should be a more regulated control of preservation, or is your film solely documenting a moment in time of Chicago’s continuous rebuilding?

NE: The people that we talked to, came at the situation from differing points of view. You had the university, which is the rightful owner of the land and the building, so theoretically they should be able to do what they want to with the land that they own. If you start taking away those rights from people in a capitalistic society than you raise all these other questions and legal issues. It’s more about trying to find some sort of balance. There are numerous buildings in Chicago that are never going to be touched because they are so significant and such an integral part of the cityscape that are also not landmarked. Those are the ones we don’t have to worry about so much, it’s more about buildings exactly like Prentice. Its a question of de facto landmarking. With Prentice, it’s an empty building. It’s a gorgeous, architecturally significant building, but you know, it’s empty, and where is it empty? It’s empty in downtown Chicago. What do we need in downtown Chicago? Space to build new buildings. Its about priorities, what do we value as a society. That’s where the whole title of the film comes from – The Absent Column – what is it? What is the missing piece here?

AD: Bertrand Goldberg’s Marina City has come to be as synonymous with Chicago architecture as SOM’s Sears (Willis) Tower and Mies’s Lakeshore Drive, yet Prentice didn’t quite enjoy the iconic status that these others do. In the age of the “starchitect”, and considering Gehry joined the fight to save Prentice, do you think it is the responsibility of the public to preserve lesser known projects by architects who achieve iconic status?

NE: Well, I don’t know. If they’re good. In Chicago, they had to knock down an electrical facility by Mies Van der Rohe, so of course if it’s a Mies, we have to save all the Mies’s. Well do we? That is the question. Nobody has ever done what Bertrand Goldberg did with Prentice – which was to take a 17 story concrete building and connect it in a cloverleaf form with 4 roman arches. Everything is cantilevered outside of it’s core. Nobody had come up with that before and nobody has done it since. It that sense, as a unique piece of architecture, is it worthy of preservation? Yes. Would I consider it among his best? Yes. Goldberg has lots of projects around Chicago, and Marina City is indisputably his masterpiece and I would put Prentice right behind it.

AD: Currently, we see a changing appreciation of modernist and brutalist architecture. New generations seem to find this architecture less detesting than their parents, and popular venues are increasingly located in concrete structures. Is this also the case in Chicago? If so, did it come too late for Prentice or did taste have nothing to do with it?

NE: I think it’s related to psychology. The people that were making these buildings are a generation or two generations older than we are. This entire idea of minimalism and brutalism, it ties into their minds – the decay of the urban core, especially in Chicago in the 1960’s-1970’s. They look at this building and see a society that was completely non-functioning and on the edge of collapse. So it’s not just architecture to them. There is a psychological aspect, that you or I or other people of our generation don’t fully appreciate. We see a building like this, and think today – you would never make a building like this, in this fashion. So, in that way it makes it special, but when all these buildings were going up, and this Miesian, orthodox mentality was spreading to every major American city, people had a bad response to it, and it tied into the culture of the time – which was approaching anarchy. The ironic thing is that Bertrand Goldberg, with these curved forms, was totally going against the black box SOM and Mies were going for. He wanted to find a more organic way of expressing architecture.

NE: No, because the one thing that remains constant was my voice in making the film, which was to express how I felt about the situation. And, using a very standard documentary technique, draw attention to a situation that I felt was worthy of attention. No matter where we have shown the film, everybody has the same reaction: that’s so sad.

AD: Michael Allen writing for Next City raises the notion that the demolition of Prentice may well be the new era’s “Penn Station Moment”, what are your thoughts on this?

NE: Well, it’s about time, was my first thought. Because the only festival we applied to, but didn’t get into was the Chicago Film Festival which was last weekend, and I was actually a little bit shocked. It was a little bit of an ironic moment, because I made the film to sort of alert Chicagoans to the fact that this was going on, and then the Chicago Film Festival, which would have been the easiest way to expose the people of Chicago to this idea, said “no, were not interested”. So it was a little bit of a fuck you man, I just did this whole thing for Chicago, and the movie is dedicated to Chicago, my love of Chicago, and they were like “no we’ll pass”. So now, it’s going to play in 2014 thanks to the New York Architecture and Design Film Festival which is going to open up a satellite showing in the Music Box Theatre, and by that time, the building will be completely gone. I’m going to fly to Chicago for the screening and sit in the audience, and I hope that everyone feels really, really, bad, because they dropped the ball.

Alexander Doerr
Alexander Doerr is a Canadian Designer with a Bachelor of Arts in Cultural Anthropology from the University of British Columbia and a Master of Architecture from the Faculty of Environmental Design at the University of Calgary. With interest in the socio-cultural aspect of architecture and how local cultures interact differently with their built environment he seeks out untold histories, local knowledge and roughing it travels when escaping from architectural office life. Work or academia has taken him to Vancouver, Auckland, Samoa, Barcelona, Cambodia, Berlin and Shenzhen, while he currently calls Jakarta home.

Last Season: The Final Moments of the Four Seasons