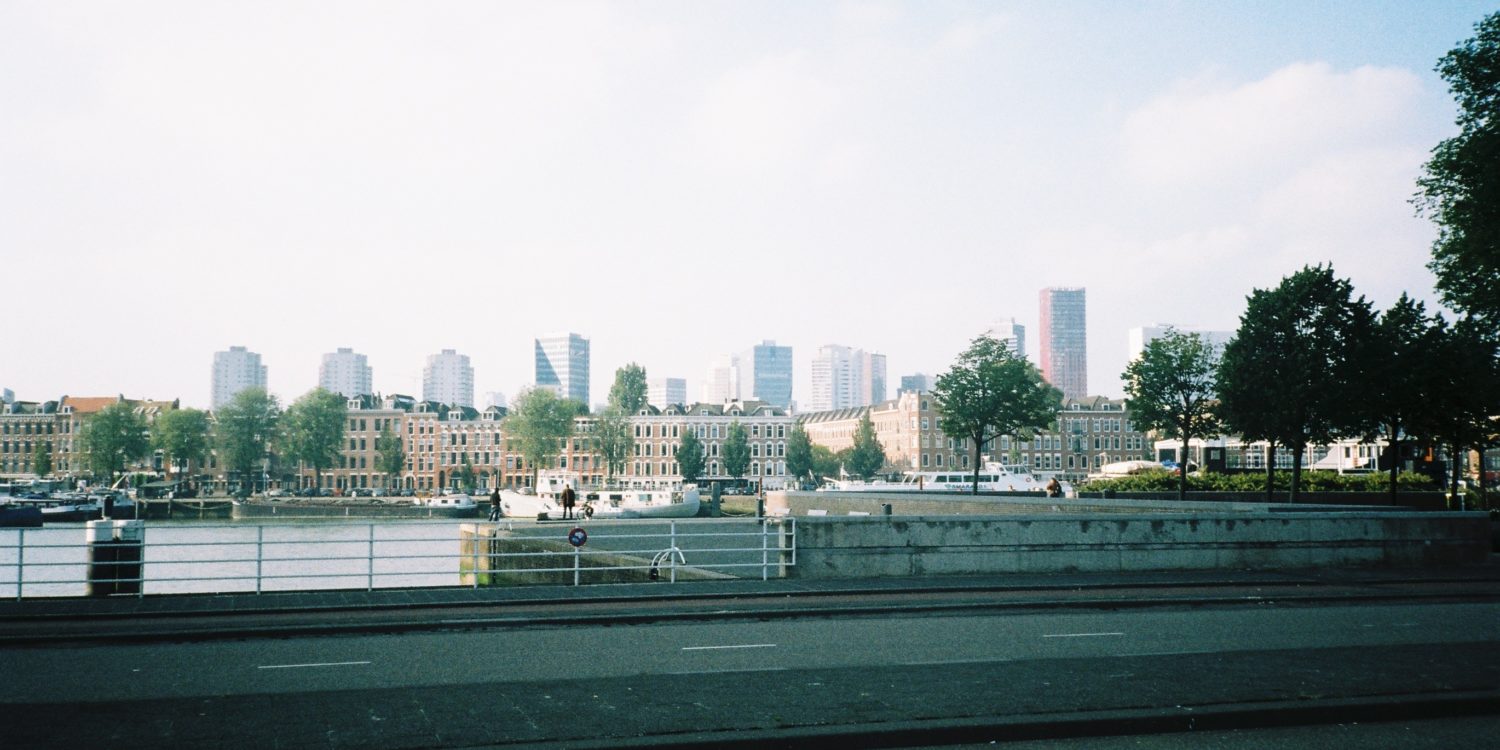 Heading down from Amsterdam, the first thing you notice about Rotterdam is that it’s nothing like its northern counterpart. Rotterdam is not as wealthy as Amsterdam. It was also, unlike Amsterdam, heavily bombed just days into Nazi Germany’s blitzkrieg of the Low Countries. Enough remained after the war but the city government preferred a tabula rasa, upon which to construct the city of the future. Rotterdam thus gladly soaked up the Marshall Plan money that postwar Europe was awash with. Certain areas of the city still reek of this initial investment, and the whole place appears to bear the residue of the initial intent behind the money since the comparison with American cities is obvious: large open spaces, low-density, no centre, wide highways for lots of cars, and far fewer bikes than Amsterdam (understandable given the greater scale). 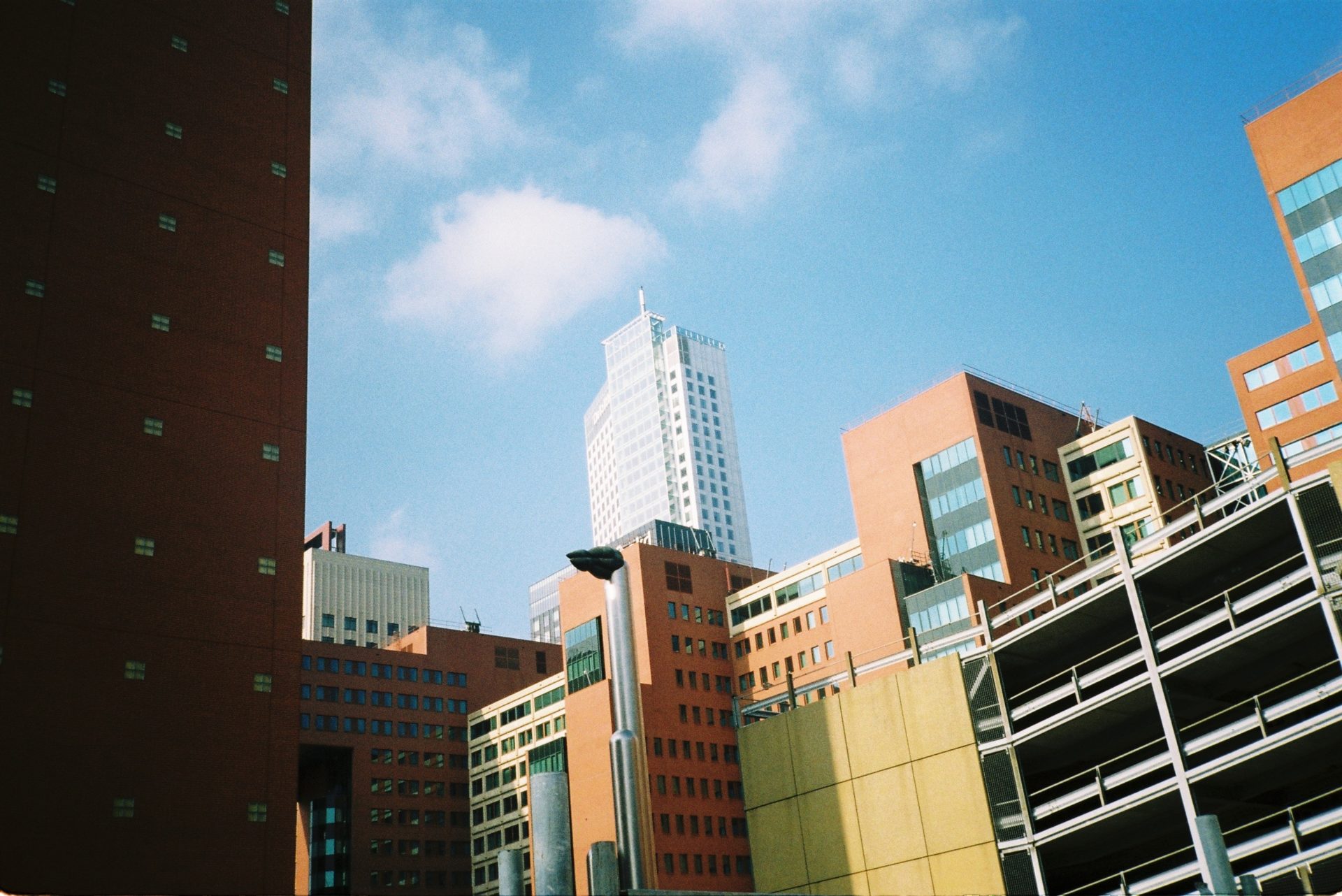 All this has an immediately disorientating effect for anyone not familiar with American cities. There are small clusters of buildings all over the place, and from the perspective of being in amongst it, there seems to be little eye for a coherent cityscape (obviously it’s difficult when in the centre to make this observation but it is confirmed from afar). It also feels rich in an American way (which is to say, rich on the surface). Skyscrapers are the main signifiers of the city’s wealth, rather than the more cohesive, planned grandeur of traditional European municipalities (apparently 20% of them stand empty, a sign of the city’s Field of Dreamsinspired plan for the built environment: “if we build it, they will come!” …fat chance). But this American comparison only goes so far. Because it’s unlikely any American city would be as clean or as well constructed, and unlikely there would be so many opportunities to walk and cycle (despite relatively few people taking advantage of these opportunities). It’s also unlikely that it would contain so many peculiar buildings. There’s the New Institute museum, once the Architecture Institute now a dubious amalgamation of architecture, fashion and e-culture. A sculpture outside the building encapsulates the confusion. It’s definitely something, only it’s difficult to tell what. In another part of town, as you head north across the Willemsbrug, a pencil-shaped building appears, nestled between a truncated lego-brick version of the Empire State Building and a comically out of place take on crazy King Ludwig’s Neuschwanstein Castle (a revival of romanesque revival, as if that’s necessary in the slightest). Close to the pencil is the building with all the cubes. This affront to function has the result that in some sections, windows recline outwards. Were they to be opened, anything (or indeed anyone) would immediately fall 20m smack in the middle of a busy road. While it must be a nightmare to furnish, the self-evident folly of the whole thing is an absolute delight. You could easily hate these buildings. But the architect clearly had a lot of fun, and who’d want to get in the way of a bit of fun? Sure, you wouldn’t want every building to be designed like this. But, hey, at least it breaks up the monotony!

Mind you, when fun’s shoved in your face, you know you’re about to be sold something and this helpful axiom couldn’t be better illustrated a short walk beyond the pencil and cubes.

Fruit, on the ceiling, well I never! And not only fruit but a cow, some insects and what looks like a crane. Now I’ve seen everything! The food hall I’m speaking of is a new creation of the firm MVRDV. It’s busy and bright and full of people. But there’s no space that isn’t given up to selling a colourful array of bright shining food products. The sensory overload summons comparisons to a traditional bazaar, but it’s much more gauche. And don’t be tricked by the elegant high ceiling, because entering this consumerist conveyor belt is like being seduced into an industrial mincer. Twisted in different directions by the crowd, the confusion seems to immediately compel you into buying something. It’s a relief to be spat out the other side and into the old shopping centre, whose refreshingly small-scale retail space is reminiscent of the shopping street you might see in a small town in the UK.

In Rotterdam it’s like an unhealthy American urbanism has been rammed down the city’s throat, but its iron stomach digested the whole thing and expelled most of the shit out the other side, staying essentially true to its European gut. Because there’s enough here to get your teeth into, and enough to chew on as you look around. You can see why people come here to look at the architecture, because so many things have been tried out and so many of them kind of work. This really became clear as you walked around the waterfront. There was a real presence. Whereas the places that have clearly imitated Rotterdam are exclusively empty even when they’re busy (I’m thinking of somewhere like Greenwich Peninsula in London), Rotterdam has people in the places where there should be people and open empty spaces where there should be open empty spaces. This is probably nonsense. I guess all I can say is Rotterdam really grew on me.

add comment
Hebergement web
Right in the city centre of Leiden, the Netherlands, the deepest Dutch underground car park is being constructed.
Related