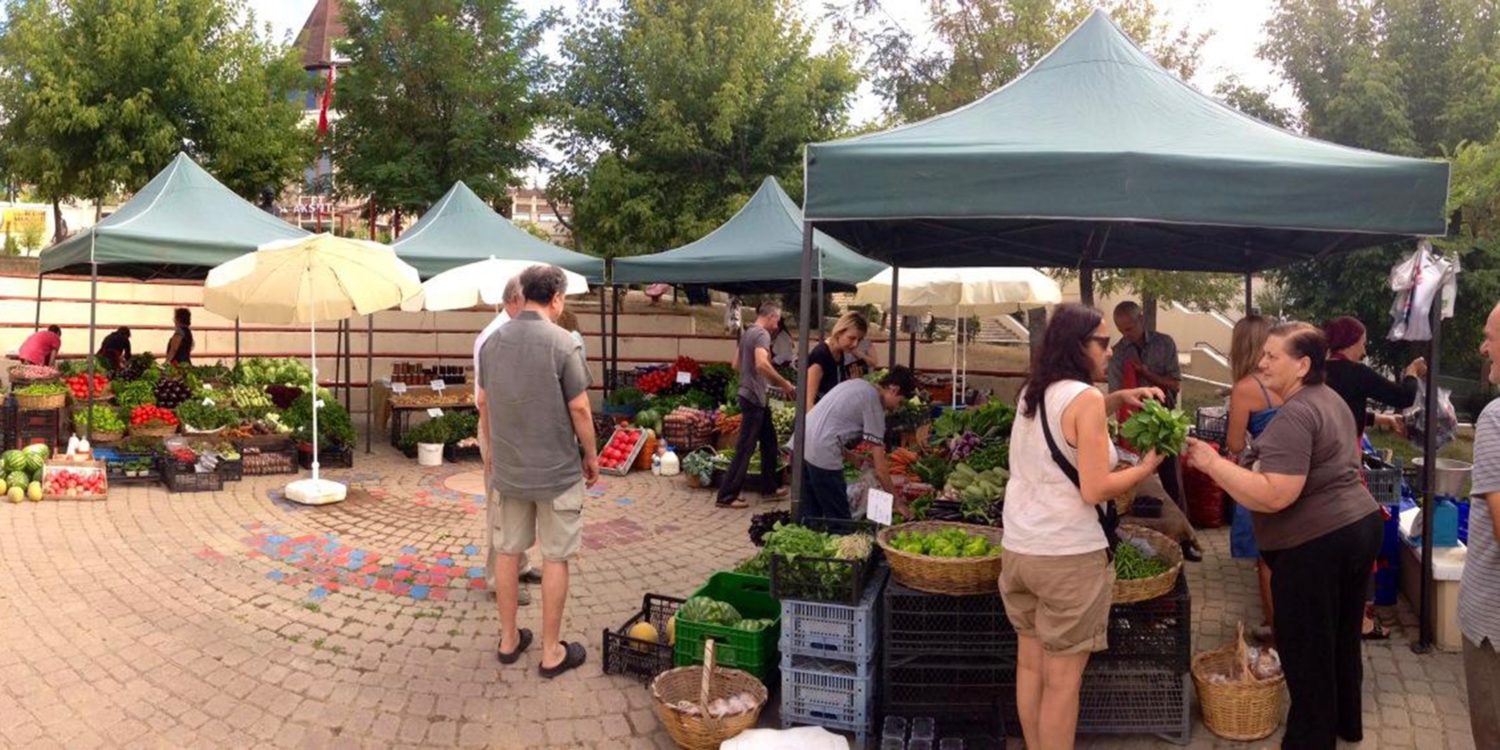 While most international media have stopped covering the unrest in Turkish cities, Merve Bedir looks at the dynamics underlying Istanbul's urban protests and the development of direct democracies.

After the initial protests in Istanbul, forums are established for an alternative, direct democracy. What clues could this give us about the continuation of the public movement in Istanbul?

Zekeriyaköy Forum
Since the Turkish PM’s rally in Istanbul on 16 June, the protests have transformed into forums in around 30 parks in Istanbul. This didn’t mean that the public was never on the streets again; an ‘LGBT pride’ and a ‘Resist Planet’ walk on 30 June, ‘solidarity for the Kurdish in Lice’ walk on 2 and 3 July, demonstrations for the 6 people who were killed by the Police during incidents, and protests on 13 and 14 July against the new law depriving the authorization of Turkish Chambers of Architects and Engineers have kept the spirit alive, since then.

The forums are not only in the parks of Istanbul, but also in universities and NGOs in different cities of Turkey, and abroad. In solidarity, a number of forums have been organized by the Turkish living in Amsterdam, London, New York, etc. The forums sometimes focus on one theme, such as ecology, media, journalism. Last week, 13th Istanbul Biennale curatorial team has discussed the framework of the biennale in one of the park forums in Istanbul.

The initial simple forum procedure has developed into a structure, including a communication platform, a social media coordination team, a moderator, a reporter and working groups, all of which make sure that the moderator changes periodically, the decisions taken and minutes of the meetings are disseminated properly, the date and subject matters of the next meeting are decided in the previous meeting, and the voting works fairly. This structure is adopted by many forums; however, the contextual tools of direct democracy still need to be developed much further. Occasionally voices raise to combine some neighbourhood forums with smaller groups or divide the major ones or make elections to define a representing number of people, but these ideas hardly receive support.

What might come out of the forums is not clear at the moment: this reactive movement has had no leadership so far, except for the Taksim Solidarity Platform, who did not necessarily try to lead but kept it going in certain direction. This inherits the risk of the movement fading out in time. Another reason for the future unclarity is most of the protestors’ stating distinctly that they have been on the streets/in the park as individuals, not representing any political view/party/etc. What happened in the case of comparison, the occupation of Zucotti Park was by anarchists who did not state any demand, and rejected to speak with public officials from the beginning, consciously. The anarchy/autonomy of Gezi Park occupation is more of an intuitive, self organized one. Besides, it has always had demands and it did try to communicate them with the government.

This question becomes crucial: how to act now, so that the process in Istanbul/Turkey does not share a similar consequence with Occupy in USA – not dissolving in 2 months, but actually causing change.
The only research declared about the protest[or]s so far was conducted in the second week of protests, in Gezi Park. It revealed that the average age of the protestors was 28 and 53% of them were born in Istanbul. 35% of the people in Gezi Park were high school graduates and 43% were university. 1/3 of them didn’t have a tendency for any political party, and didn’t vote in the latest general elections. 94% of them said that they were in the Park as individuals, and not represented any organization. 70% of the demonstrators were first informed of the Gezi Park incidents by social media, 85% of them were active social media users. The reasons for joining the demonstrations were: the limitation of individual freedom [58%], government party policies [37%], Prime Minister’s policies [30%], the trees [20%]. One member of the Çarşı fan club, which was at the forefront in the protests, said: “We’re not a political movement. We just want to live and to be respected as human beings.”

Being 28 on average and at the heart of demonstrations was something that the older generations did not expect, if not the entire country. Young people, who are known for being apolitical, have actually displayed a very ideological position supported by determination and solidarity during the protests. One might argue that it is their cynicism, their distance to politics in Turkey, their thinking that the current political context doesn’t  represent/reflect their way of thinking at all, that have kept them away from politics. The low rate of voting among the protestors is a clear indicator of this situation.

Occupy Gezi might have reduced the distance of cynicism between the young people and politics in Turkey, but it can’t be presumed that this movement will transform into a new political party. The political context in the parliament that created the cynicism and distrust among the young/public can’t be the medium to be represented and expected to make a change. What happened in Turkey in June 2013 was not a revolution as in pulling down the government, but it was a revolution of becoming aware that an alternative is possible. If this movement could transform into a strong platform with its own mechanisms, which will organize the public, no matter how the situation will evolve for Gezi Park for other incidents and after the elections, it can do much more when the economical and governance crises deepen globally. 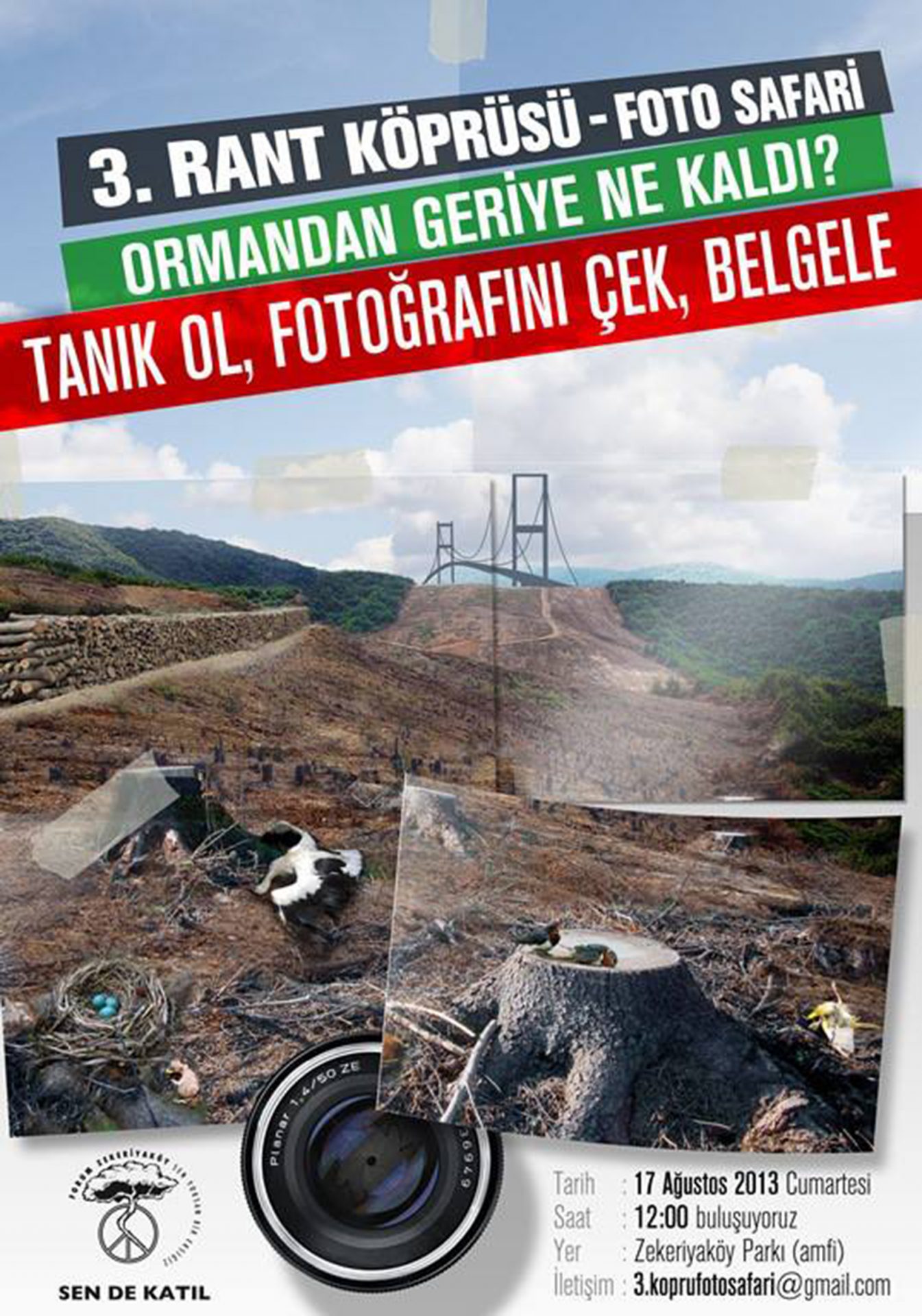 Poster for a photo safari activity organized by Zekeriyaköy Forum, to document the environmental destruction for the 3rdBosporus Bridge of Istanbul.

The attempts to structure the forums is already a step forward to establish a platform, even if it is a little one. Focusing the attention of the forums on the notions of civil rights, democracy, urban transformation and the environment seem to be the most resilient direction to go forward at the moment, since the city in fact, is our common. Putting the city in the center of action: discussing and acting, developing new scenarios for the transformation and development of our cities might provide us to exercise direct democracy in different scales, develop tools, methods, etc. Why not alter the forums into organizations that will act on the local scale of their neighbourhoods, proactively create new projects, and make them happen? Why wouldn’t the next occupation happen in the Northern Forests of Istanbul, which is in the PM’s agenda for urban development, the new towns in the north, the 3rd bridge crossing the Bosporus, the urban transformation projects in the city that lead to social exclusion and privatize public property and the cutting down of a few more trees?

Merve Bedir
Merve Bedir is a PhD candidate at Delft University of Technology and partner in L+CC. She has been working on urban transformation in Turkey intensively for the last two years.

We Participate, They Profit