A spotlight on three of Istanbul's everyday and often overlooked architectural typologies.

The architectures that we pass every day, without even noticing, on our way to our busy lives, shape the corners of our cities. They are so embedded in our urban landscape, and the monotony of our daily routine, that we usually neglect them. We barely pay attention to them as we cross the street. Blink and you’ll miss them. These are the quotidian architectures of the cities.

Istanbul is a megalopolis, with a population slightly over 14 million people, that has become a large construction site in recent years. With massive projects in progress – a third bridge over the Bosporus, a third airport set to become the world’s largest and an artificial sea-level waterway, none of them free from controversy – Istanbul seems to be in a rush to construct megastructures that draw attention to themselves. And in this context, but on the other end of the spectrum, we find a series of ordinary architectures – sometimes mundane, sometimes brilliant – that inadvertently contributes to the solidity of the urban network. Are we, citizens, just apathetic to them? Should citizens dismiss them or embrace them?

Sometimes good architecture is not noticeable at first sight. The following are 3 examples of designs that could fall into this category and are found in present-day Istanbul. And precisely because they are half hidden and quotidian, they may deserve to be acknowledged, recognised and, just maybe, celebrated.

Electrical transformers painted as Ottoman houses
Spread across Istanbul, and usually located in suburban neighbourhoods, we can find electrical transformer substations that have been painted as Ottoman houses. They can be either detached or integrated into the urban framework. The painted surfaces of these cubes do not reflect their real function and in this dichotomy lies its peculiarity. A distorted conception of content and container, of organs and skin if you will, place these devices in an interesting intersection between public art and plain functional architecture.

These substations are painted following the prototype of a traditional Ottoman house. This housing type appeared in the 16th century across the lands of the Ottoman Empire and continued to proliferate until the 19th century. They could be either konaks, the traditional urban residence or yalis, summer houses on the shores of the Bosphorus. The konaks – the typology upon which the painted transformers are based – had two or three floors and the upper stories projected out over the street. They had wide roof overhangs and were made of wooden frame filled with mud-brick or stone. Current examples of these houses can be found in the UNESCO-protected old town of Safranbolu, a village in Turkey’s Black Sea region. This house typology is fixed in the collective unconscious of Turkey, like a Jungian archetype of houses.

There are some details that may vary from one substation to the next, but we find repetitive motifs that provide a cohesive style. These common elements provide the metal cubes a human and familiar scale: walls painted in white contrast with the edges painted in brown imitating a wooden structure, fake windows with curtains that look like they could have been painted by a child, decorative wooden ventilation grills or an overhanging roof.

In every example we find peculiarities unique to them: an inviting wooden door, a pitched roof, a stone basement painted to imitate stones that hide the metal ventilation, real flowerpots or a doorjamb that imitates ceramic pieces. It would seem that inside this defined style every substation was given some extent of freedom to be customised.

Comparison of an electrical transformer in Istanbul to a traditional Ottoman house in Safranbolu.

The use of elements like overhangs or fake ventilation grills – used in the real Ottoman houses so women could look out without being seen by passers-by – breaks the flat plane of the unattractive cubes and exhibits a willingness to go beyond a two-dimensional surface and provide a three-dimensionality to the whole structure. This simulation of Ottoman konaks in the 21st century is filled with nostalgia: they are an illusory representation of a past no longer existing in Istanbul. The desire to remember and represent a fantasised past ultimately constitutes a new urban identity. While urban change makes us confront the new, these elements are built upon a fantasy of a lost city that, ironically, is part of the city’s new infrastructure.

There is a conscientious decision in painting these cabins as historical houses instead of modern dwellings and customising them. The contribution of these illusions of domestic architecture to the urban diversity is ambiguous: is the strategy of these mockups to incorporate an obtrusive utilitarian building into a residential area or, on the contrary, to bring attention to these electrical artefacts and make them stand out from their monotonous suburban environment? Are these romanticised memories of dwellings an improvement to the banal constructions or do they worsen it with their kitsch approach? Behind this customisation does there lie a real interest to recover a past long gone or a sarcastic attitude towards revivalism?

Simit Sellers
The simit sellers are one of the most enduring images of Istanbul. There are records of simit sellers in the city as far back as 1525 although the classic push carts presented here became popular in recent decades. Their menu is as short as the dimensions of the cart: circular bread coated in sesame seeds. In recent years they have also started to offer bottled water and other similar salty pastries but the bread rings are still the distinctive feature. There are around 8,000 simit vendors in Istanbul each one selling between 150 and 200 simits a day. These single-food eating establishments are used by all parts of society, from executives to construction workers to teens taking their breakfast to school. 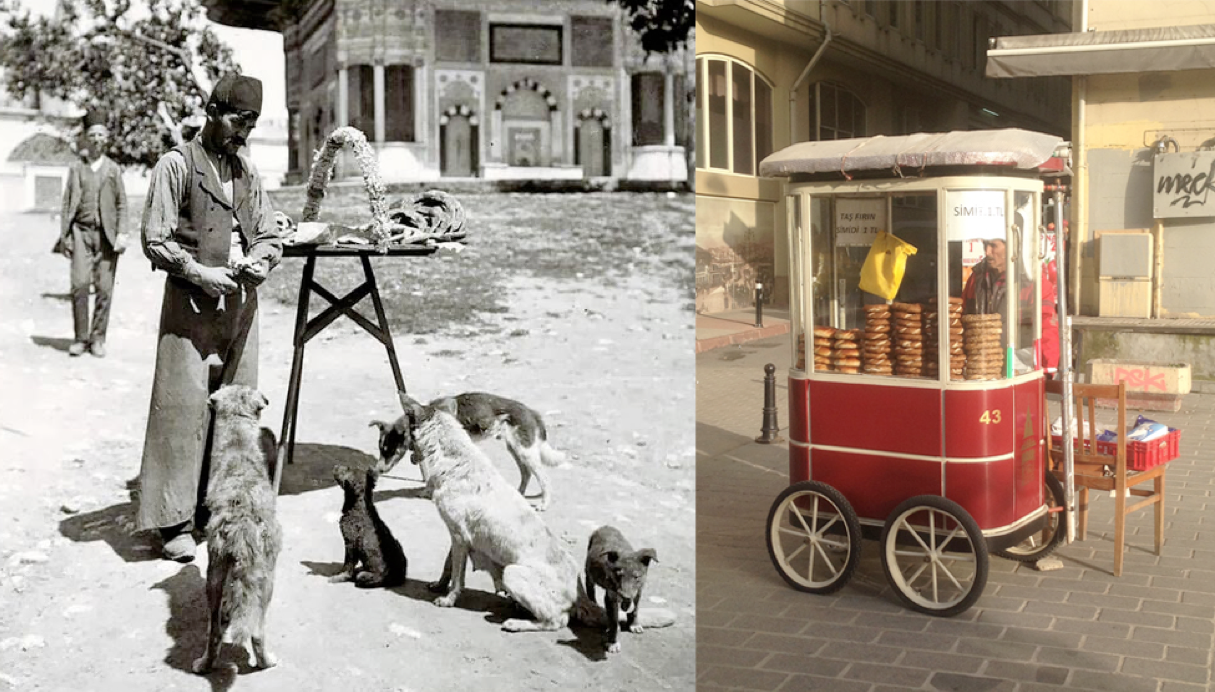 Comparison of a simit seller circa 1880 and today.

These bastions of fast casual breakfast have managed to thrive and become iconic in a city where street food is a convenience and a lifestyle. They represent the finest example of portable architecture in Turkey.

The most extended simit trolley design presents a traditional red color, four wheels and a glass display with white aluminum frames. The stall and the seller are protected from weather conditions with a parasol with the traditional color scheme of red and white stripes. The seller is usually standing up or sitting on a plastic or wooden stool. Their unified color – which the Istanbul municipality provides under a licensing regime – prevents them from blending into their context and helps them to stand out and attract the attention of possible clients. From this ideal prototype they vary in shape and form but keep a recognisable style.

The simit cart becomes a semi-permanent architecture. First, it creates a space where the simit seller inhabits and, secondly, delimits a spatial sequence on the sidewalk: ordering, paying and take-out takes place within a very limited space. This stopping point, offering snacks on the street, fulfills the function of inexpensive takeout food and are small enterprises in themselves. They represent a document of social history: from simitcis selling their goods on the top of their heads with traditional Ottoman dresses to the current movable models or franchised shops show the evolution of simit selling. These carts are unique forms of vernacular architecture. A simple box with a service window brings together form and function with little room for design (there is some concession to rounded glass corners, different types of wheels and a degree of customization). Like the electrical transformers painted like Ottoman houses they have a similar style but each of them has different details and customisations. These pushcarts are part of the city’s floklore. We can find other examples in Istanbul that deserve an honorable mention: chestnut sellers that sell hot chestnuts all year around, corn sellers or the informal sellers of stuffed mussels. But still, the simit carts are the quotidian landmarks that represents the start of the day for most citizens of Istanbul.

Shaped phone booths
Phone booths are a dying residual of a pre-cellphone era. Once cultural icons – from the red telephone boxes of the UK to the iconic image of Superman’s favourite changing place– are now everyday more scarce in big cities. In Istanbul they still survive in shapes that vary from flowers and sport shoes to a variety of animal themed shapes. Turk Telekom, the national telephone company, sponsors this unashamed homage to kitsch.

These elements are in themselves a prime example of novelty architecture, a type of architecture in which buildings and other structures are given unusual shapes for purposes such as advertising. These shapes are deliberately eccentric and cartoonish to attract passing customers. A phone call becomes then a playful action and this playfulness adds to their appeal.

In most cases these booths mimic their environment. We can find an eagle-shaped booth near the Beşiktaş stadium – the football club’s animal emblem – or dolphin/seagull-shaped booths near the sea coast.

The telephone communication becomes an ironic experience under these shapes. The user can be literally under a dolphin or an eagle while they make a call. These creative public phone booths enliven the streets and become quotidian goofy landmarks.

Santiago Brusadin
Santiago Brusadin is an Istanbul based Architect and freelance writer from Barcelona. He has worked in Architecture offices in Spain, Poland, Italy and Turkey. He received his masters degree in environmental Control and Building Technologies from Istanbul Technical University. In addition to his work he writes on hidden architectural gems and contemporary design for Time Out Istanbul in English and Yabangee.com.