School’s Out: A Modernist School Building Has to Go

Amsterdam's former St. Nicolaas school has to make way for a park.

Despite of showing its potential as an arts space and despite the planning director’s wish to revive and diversify the area, the former St. Nicolaaslyceum will be demolished to make way for a park.

The complex in 1959. From left to right: the monastery, the chapel and the school.

Zuidas is Amsterdam’s high profile new business district. Most major financial players have relocated their Dutch headquarters here. Fifty-five years ago, the area was still an undeveloped serene piece of farmland. In 1958, a hypermodern piece of architecture was constructed there: the Sint-Nicolaascomplex, a traditional catholic enclave consisting of a school, a monastery and a chapel in a radically modern accommodation designed by Lau Peters. The school building has been intensively used all this time, until the end of 2012.

With the glory years of Catholicism gone, the monastery – the last one ever built in Amsterdam –  and chapel became obsolete in the 1990s (compare e.g. to St. Peter’s Seminary in Scotland). The last priest left the St. Nicolaas monastery in 1998. The building was used by the Sandberg Institute for a few years and then housed an artist-in-residence. The chapel was classified as a monument and nicely re-appropriated into a restaurant by Studio Müller van Tol. The monastery and the school did not get the monument status, despite of the efforts of advocacy groups that stressed their high cultural-historical value. The architecture of the school is one of the earliest examples of its kind in Amsterdam and the Netherlands. Not receiving the monument status made the future of the two buildings all the more insecure.

The school
The St. Nicolaaslyceum moved to a new building in October, leaving the old building vacant. Recently, asbestos was found, which is currently being removed.  It has been decided that after this is finished, the entire building will be torn down. Looking at the plans and publications by the municipality, it becomes clear that the grounds will be landscaped and joined to the adjacent Beatrixpark (the last publication about it, from January 18 , talks about making it part of the park). Another alternative that has been discussed was the construction of apartment blocks, but the current Dutch real estate market is all but promising, and the local interest group ‘Friends of Beatrixpark” – which is 1100 strong – has been vigorously advocating the expansion of the park. So, in the new design of the park you see the location of the building replaced by greenery and a water pond.

The city’s take on the building
The ownership of the school was transferred by ING Real Estate to the municipality, which has also issued the required permits for demolition, so obviously it supports the idea that the building has no future. Klaas de Boer, director of the municipality’s Zuidas Development Office, seems to have changed his mind. Early November he was saying: “Only if there’s no good alternative, demolition will take place. Room for the unexpected, that is the principle” [translation by the author from the original Dutch text], and two months before that Mr. de Boer wrote that the plans for the St. Nicolaaslyceum “fit in the broader take we have on art in Zuidas. There has to be things going on, that’s our aim. Arts and liveliness in the street go hand in hand [translation by the author from Dutch]”. 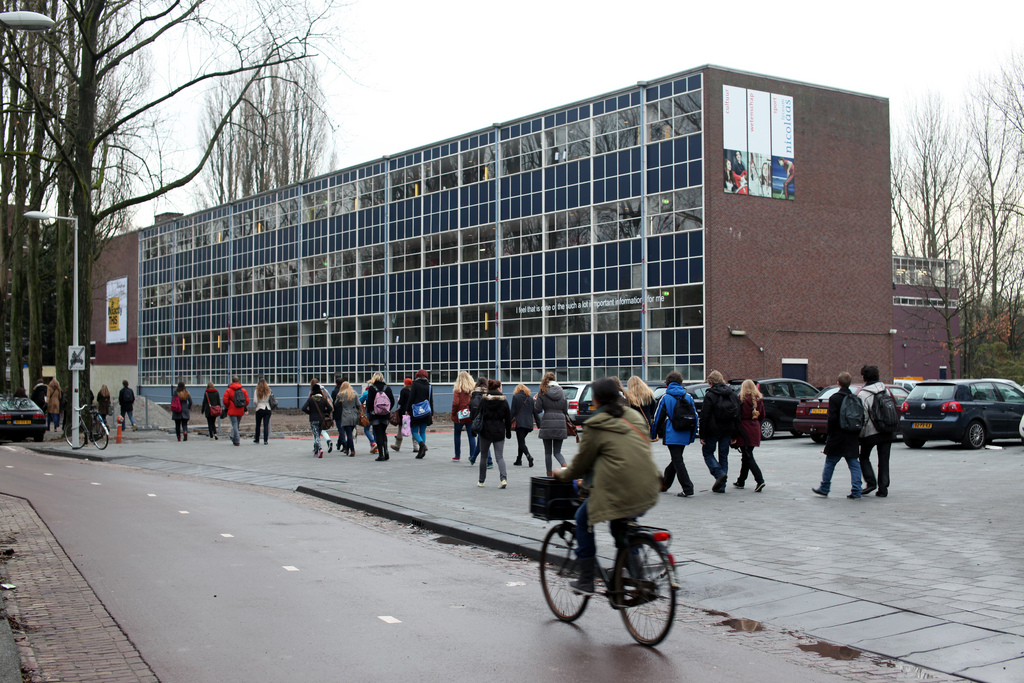 The school building, during Kunstvlaai in December 2012.

Kunstvlaai
The only unexpected and lively thing to happen in the building was an art’s event: the last activity to take place in the school building was Kunstvlaai, a “Festival of Independents”, from November 23 to December 2. It describes itself as a hosting platform for local and international artist-led initiatives, art schools and nomadic organizations of the contemporary visual arts. The programme consisted of exhibitions, workshops, lectures, screenings, interventions and researches.
One of the organizations at Kunstvlaai was Partizaning, an arts-based social activism collective that does action research and artistic interventions. Their works and researches are critical, making people aware of the kind of place they are in and their direct relations to the people and built environment around them. One example is this clever project they did in Amsterdam last year, questioning the “right to the city”. 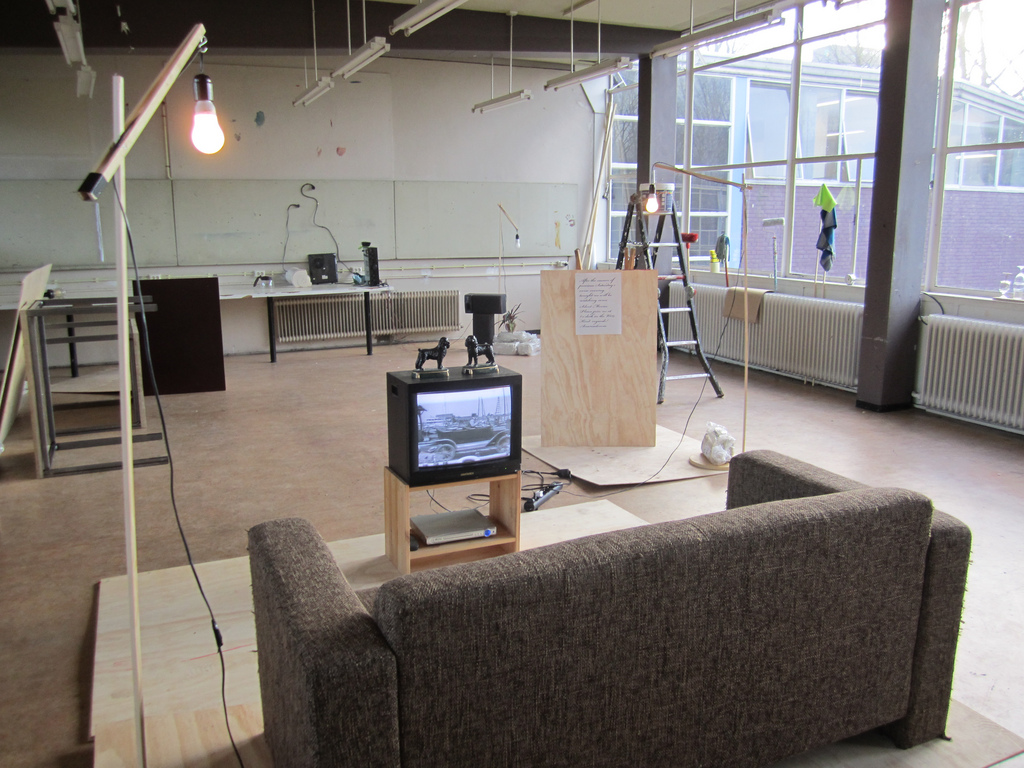 Questioning the St. Nicolaas
At Kunstvlaai, Partizaning – who are based in Moscow – did a site-specific research that dealt with the St.-Nicolaas school building. They engaged with the artists residing in the building during the festival, and people living and working in the building’s vicinity, in order to explore alternatives to the building’s impending demolition. In response to the question ‘What should happen to the former St. Nicolaas Lyceum building?’ people could choose from the following answers:  Replace it with apartments; Replace it with a park; Use it as an arts incubator. Despite of a slightly biased research group, the outcomes were unanimous: the arts incubator was the favourite choice of most people by far.

As Partizaning they also mention in their online piece about the complex, they perceived the area as extremely boring and expensive i.e. lacking diversity, creativity and liveliness. You somehow hear the words of the Zuidas planning director echoing (“there has to be things going on. Arts and liveliness in the street go hand in hand”, and “room for the unexpected, that’s the principle”), filled with irony. 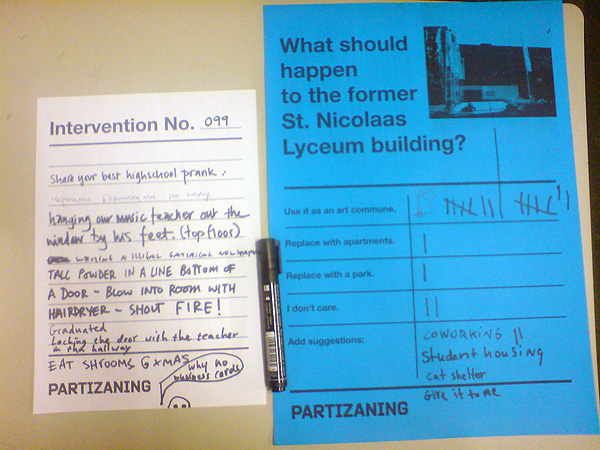 Some of Partizaning’s research tools.

The art of making a building
Partizaning’s Shriya Malhotra told us that she really loved the building, especially after living in it. “The building has a lot of potential, it just needs to be re-imagined as a space. It is perfect for communal living and hosting diverse activities”. She is positive regarding the sober architecture: “the fact that it is simple and functional is really nice, and I liked the simplicity of the aesthetics” and she contrasted it with “ego-driven contemporary signature architecture”. She felt that – also based on their site research – reprogramming the function of the building could contribute to the area’s liveliness, something that was missing according to many people. 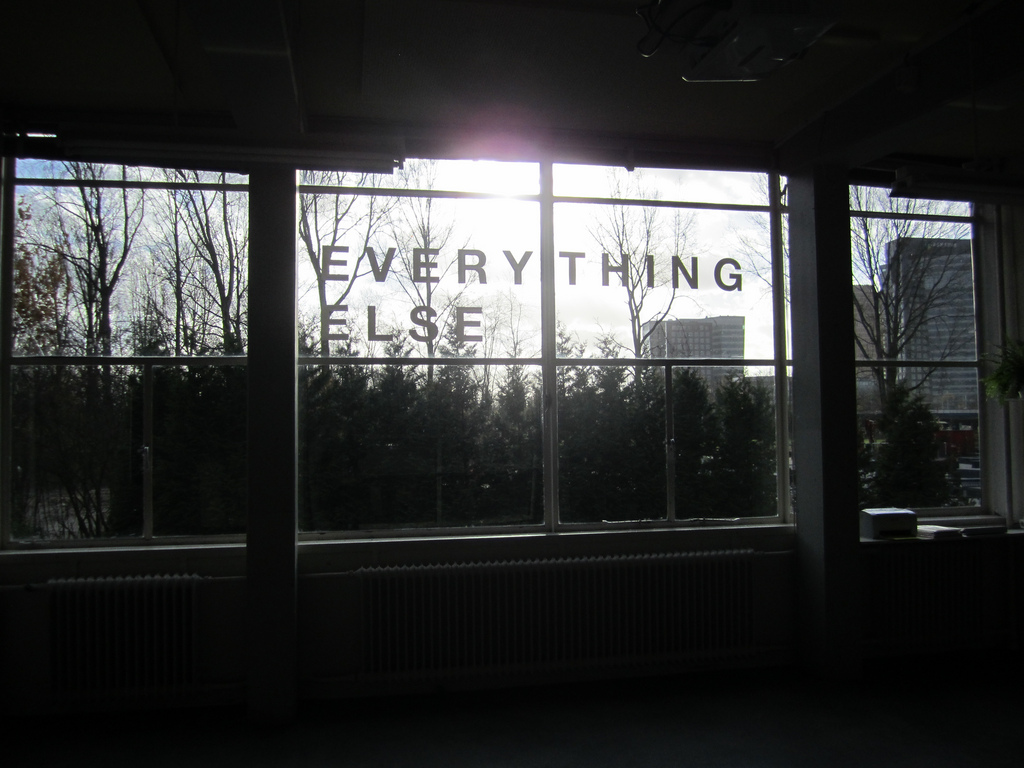 An exhibition space during Kunstvlaai.

Apathy
Shriya says that they didn’t know how Amsterdammers would respond to the fact that the building is going to be demolished. “We were a bit surprised by the general apathy and trust in the municipality and the development plans”, but perhaps the building – or many buildings in general – “just does not really elicit emotional responses”. While some of the people Partizaning spoke to – teachers and students from the St. Nicolaas school – did care about the history of the place, they do not seem to have a strong connection with the building. Regarding this, Shriya argues that changing the function of the building could change the perception of the space and its use, “particularly in a place that doesn’t have much arts and culture. People are creative to use spaces for whatever their needs and requirements are”. They only need to be given the space to be creative.

Broken
When we spoke to an teacher who used to work in the old St. Nicolaas, he told us that the affection for the building is indeed low, because it did not meet current standards any more. He compared the building to a “rabbit-hutch” and stated that the heating costs were sky high.

The previous users of the building seem to be happy to have moved out. With asbestos found and an advocacy group pressuring the municipality to expand the park, there are enough excuses for the city to tear down the building. 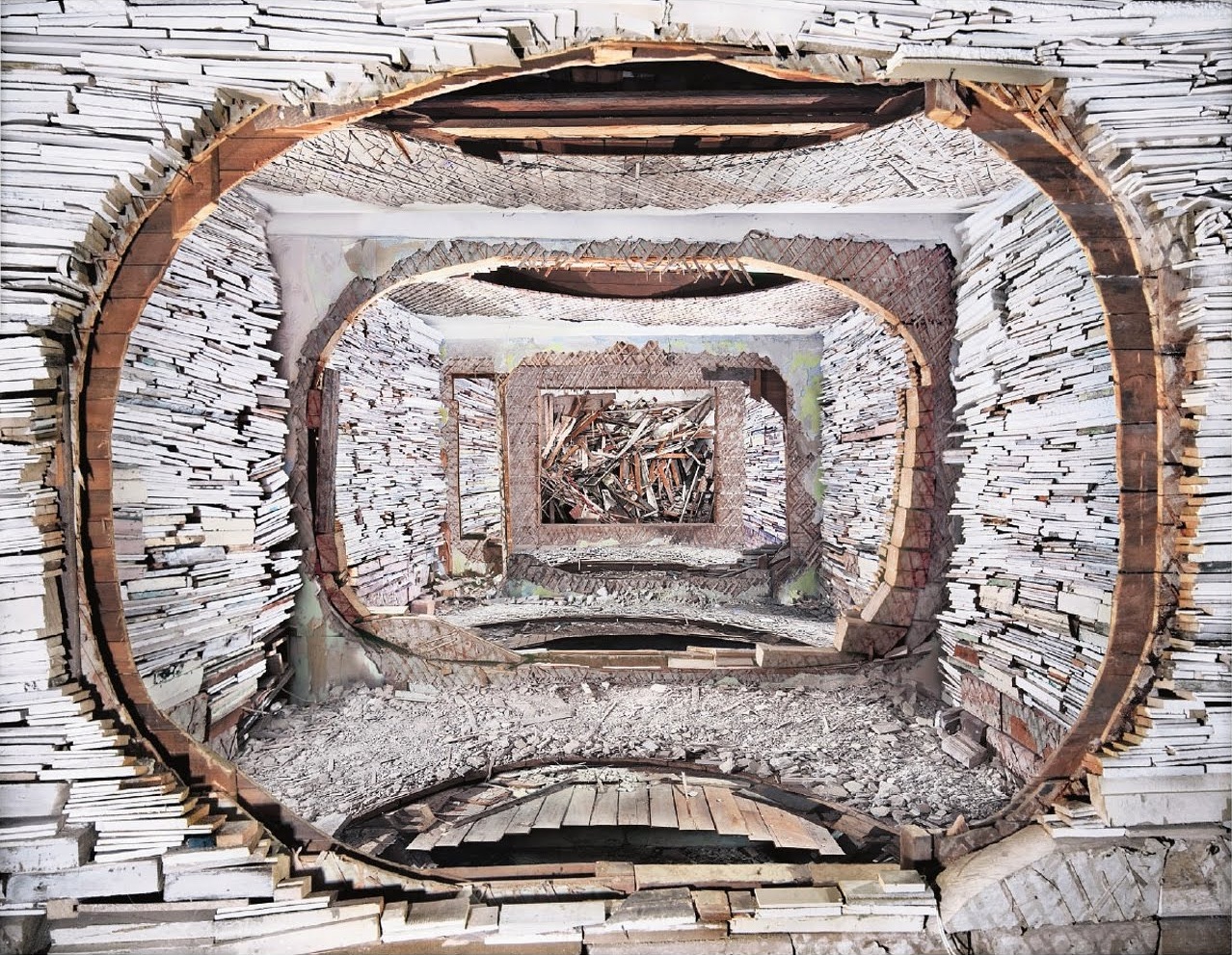 Art after all
The destruction works have already started and artist Marjan Teeuwen has been commissioned to do something with the building, just like she has made powerful artworks out of other structures before they were demolished by using fragments of parts of the building to construct layered partitions. Very much like Gordon Matta-Clark, she makes the buildings leave a last impression before they are actually gone, instead of letting them quietly disappear. Apparently, this is what the Zuidas director was referring to when he was talking about arts and liveliness.

It turns out that the words of the planning director of Zuidas do not correspond at all with his final decision and the future plans for the park. He was talking about “liveliness”, but maybe he confused it with a conservative definition of “livability”: green and quiet, preferably not too attractive to large crowds. In an area that is already struggling with its identity – too boring, not diverse enough – the St. Nicolaascomplex could have potentially added that extra bit. Clearly, it did not convince enough people of being of possible value to the area, let alone deserving a heritage status.

add comment
forex brokers list
Hurrah! In the end I got a web site from where I be able to truly obtain valuable data regarding my study and knowledge.
Related