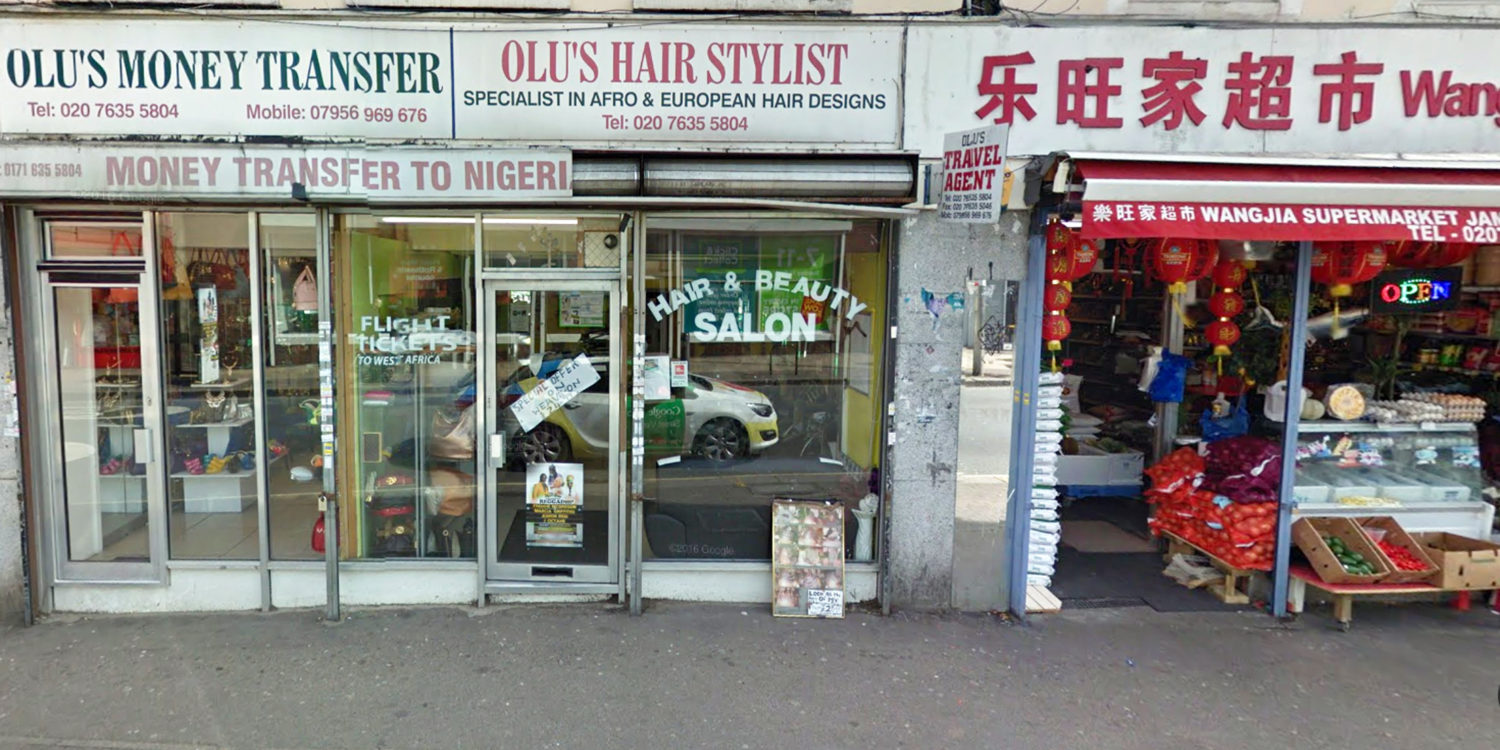 The Radical Culture of Night Shops and Beauty Salons

Museums and art galleries have long held a monopoly on high culture, but as the project FOR THE CULTURE shows, there's even richer pickings on the city streets.

Rye Lane in South London is a densely packed shopping street that serves the area’s diverse population through an incredibly rich network of micro-economies. As a 2013 report from LSE Cities found, the majority of the shops on the street are occupied by independent proprietors, trading in clothing, hair and nail services, meat, fish and ethnic foods, mobile phone products and much more. Along with the diverse offering the report observed an equally diverse range of proprietors, coming from over twenty countries: from Afghanistan to Eritrea, Ghana to India, and Vietnam to Jamaica. But while Rye Lane’s economy has thrived, the report found that the local council of Southwark has for the most part sought to limit the street’s economic and cultural diversity.

Every major city hosts streets like Rye Lane. They’re usually located in a less affluent part of town, often showing signs of neglect from the local authority, but always busy because they provide services and products that simply aren’t available in the more central parts of town, and also because they offer that harder to define quality: a sense of community. As vital meeting points for these cities’ various immigrant populations, such streets support a remarkably complex cross-cultural dialogue that has had a deep and lasting impact on contemporary pop culture over the past few decades. 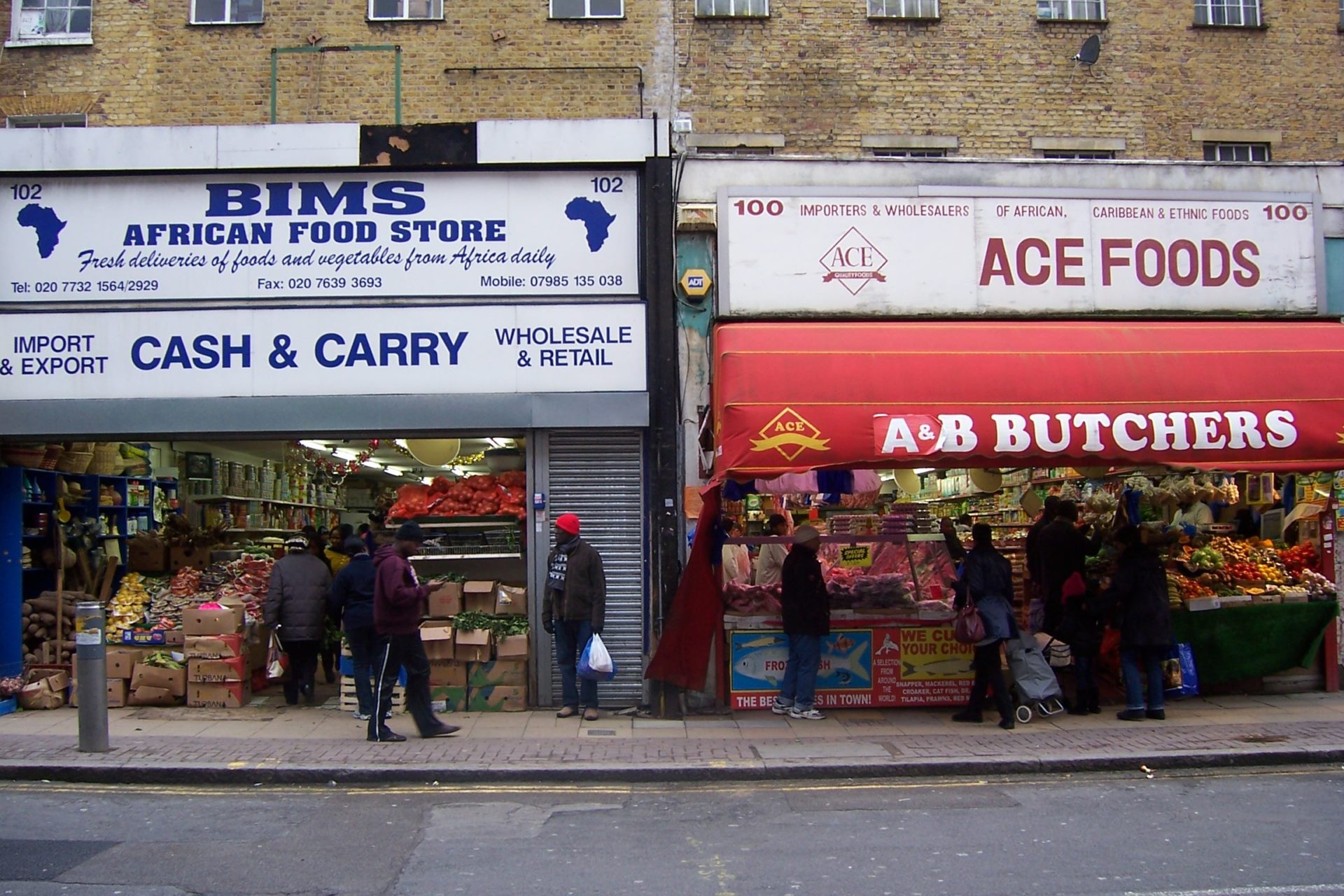 It’s this street culture that was celebrated in FOR THE CULTURE, the first of three events for “Re-mix & Re-search: whose cultural appropriation is this?”, a project taking place throughout the Netherlands in Autumn 2019. Emerging from a collaboration between cultural programming platforms Metro54 and Concrete Blossom, and unfolding across various informal locations across Rotterdam West, FOR THE CULTURE brought together a collection of artists engaging with the relationship between street culture, everyday social life and urbanism. Reflecting on the stories, art, issues and design of everyday architecture, the event highlighted the fact that the richest and most rooted cultural production resides not in museums and art galleries but on the street.

Of all the everyday spaces that the event covered, the salon is perhaps the most underappreciated in mainstream culture. During the initial event, the Mixed People Salon on Josephstraat hosted a video work by London-based artist Zeinab Saleh. Entitled “4 star wedding”, the video takes the form of a collage of imagery from family home videos and self-shot footage, with Mariah Carey’s “The Impossible” (2009) playing on the soundtrack. Speaking about showing the video at Mixed People, Saleh explained that “the salon space and the video both engage with a sense of community… The craft of the work in these salons is appreciated and recognised in the video. There is a shared sense of womanhood in the video and the salon.” 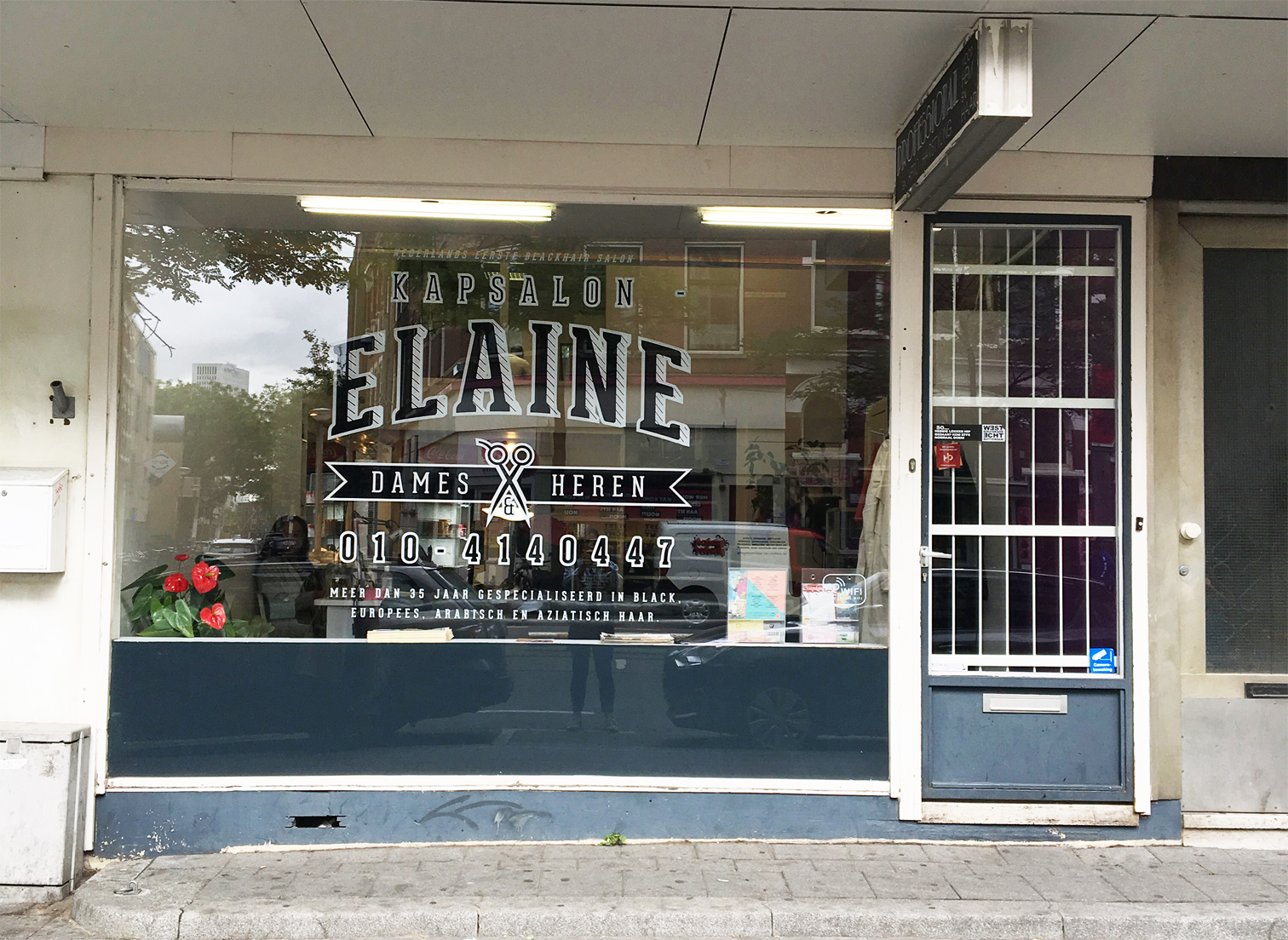 Saleh’s relationship with the salon as a space is also mediated by her own personal experience as a practising Muslim. Usually the salons she goes to in East London have “ladies only” signs and, as she explained, intimate relationships can form in the space: “a women-only safe haven is formed, hijab-wearing women let their hair down and anything is up for discussion: love, heartbreak, or a job promotion. Formality is gone because of the shared sisterhood and these spaces boost women’s confidence.”

Overlapping with this private experience is a more public interaction with the salon on particular days of the year. For instance, during the day before Eid al-Fitr, the festival marking the end of Ramadan, long queues of women form inside the waiting areas of these salons since, as Saleh explained: “fewer women visit the salon as the month of Ramadan is observed, so eyebrows get thick if you haven’t done them for 30 days! There is the anticipation of Eid and the days before are full of energy in every salon, whether it’s people getting their eyebrows done or henna.” 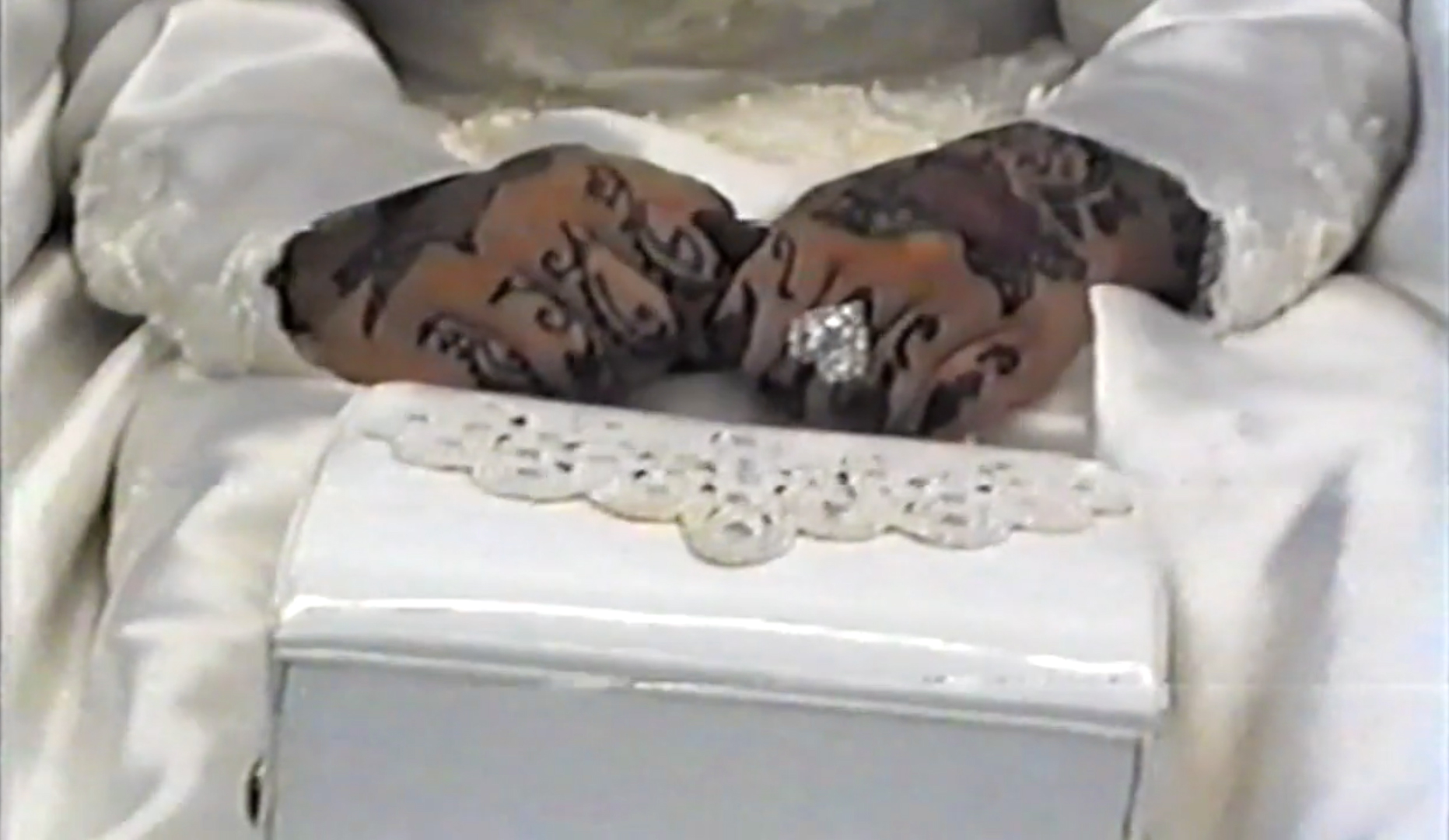 To call this salon culture rich would be an understatement. And yet, mainstream Western society remains for the most part ignorant of its depth. There’s an obvious reason why this is the case. As Saleh said, “these salons are usually formed by working-class immigrants and the architecture is deemed naive.”

This point was echoed by another of the artists who contributed to the event, Cedric Kouamé. “A certain culture or a certain group of people that are thinking as artists are being ignored because the playground of their art is on the street,” Kouamé said, “it’s threatening the order of things and that’s the reason why the municipality is trying to constrain it.”

Kouamé specifically used the example of graffiti. Where he lives in Brussels the municipality has adopted a policy of offering up legal graffiti walls. “For the municipality, building those legal walls is just meant to push aside the actual real graffiti vandal culture that is happening here.” 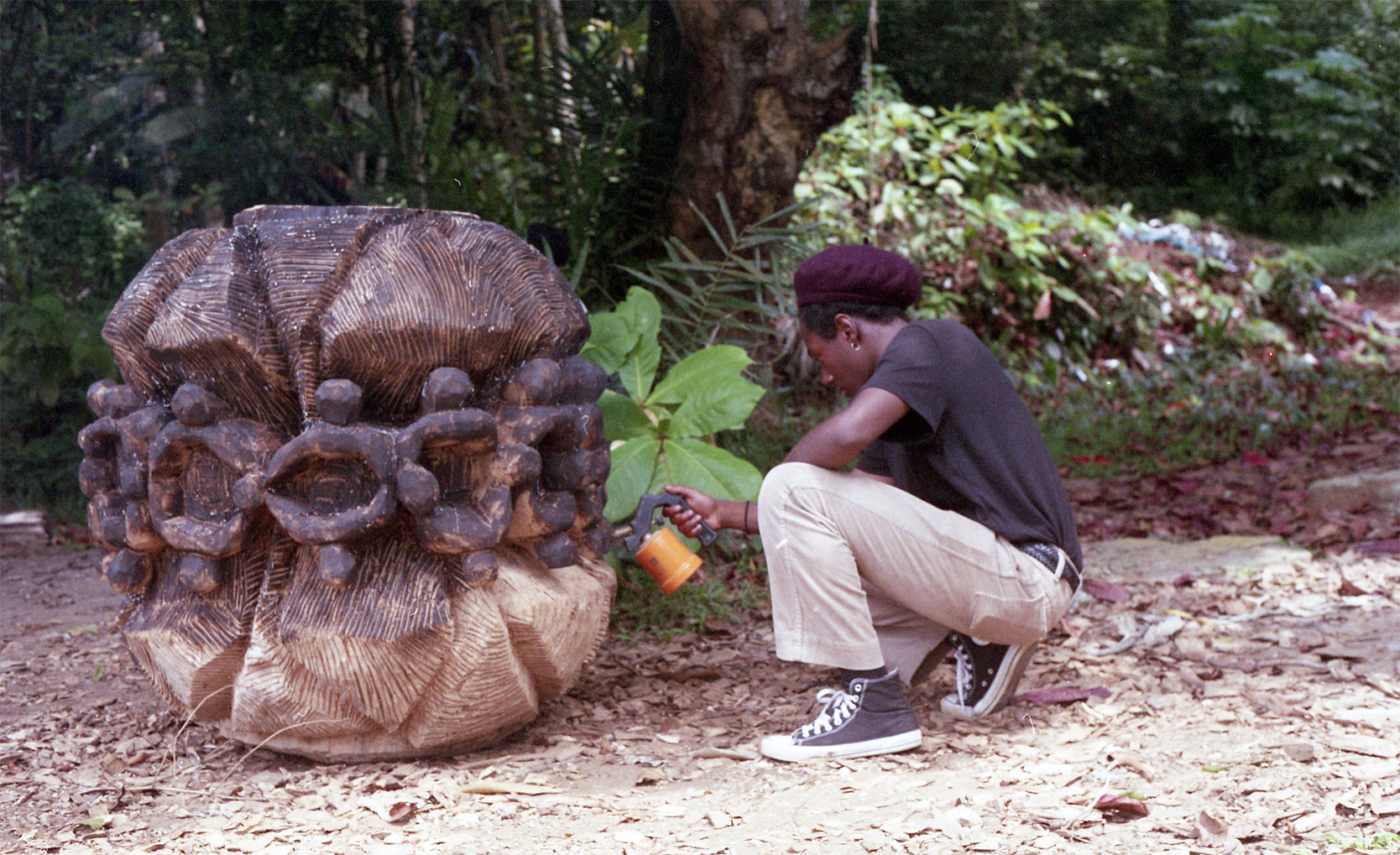 Considering what makes these businesses so valuable, Kouamé talked about the particular way their aesthetic expresses the culture of the owners. “When entering a nail salon or a night shop or whatever, I feel like I’m traveling from Brussels to the countries where the owners come from, because these places are made through the products that those people are selling, even if they’re made out of an industrial American production, in those shops, they are put together in a way that is showcasing the owner and the owner’s culture… if you go from one night shop to another, one owner is lighting incense and the other is eating with his family in the back of the shop, while in another they have advertising about religious events.”

For FOR THE CULTURE, Kouamé performed his project “Twice Less” at the Krachtvrouwen community centre. Twice Less comments on his experience as a person of colour who has to work twice as hard to have his work acknowledged. Against this, he proposes doing Twice Less. As he describes it, “Twice Less is trying to reverse the gaze. Art history is something that has never really included people of colour and people from other cultures, that’s something that is worth exploring, to do Twice Less, to showcase the opposite of what I always heard”. In other words, Kouamé shouldn’t have to work twice as hard to ensure that his cultural experience — as someone born and raised in Côte d’Ivoire and living between Abdijan and Brussels — is considered worthy of being represented. Quite the opposite. 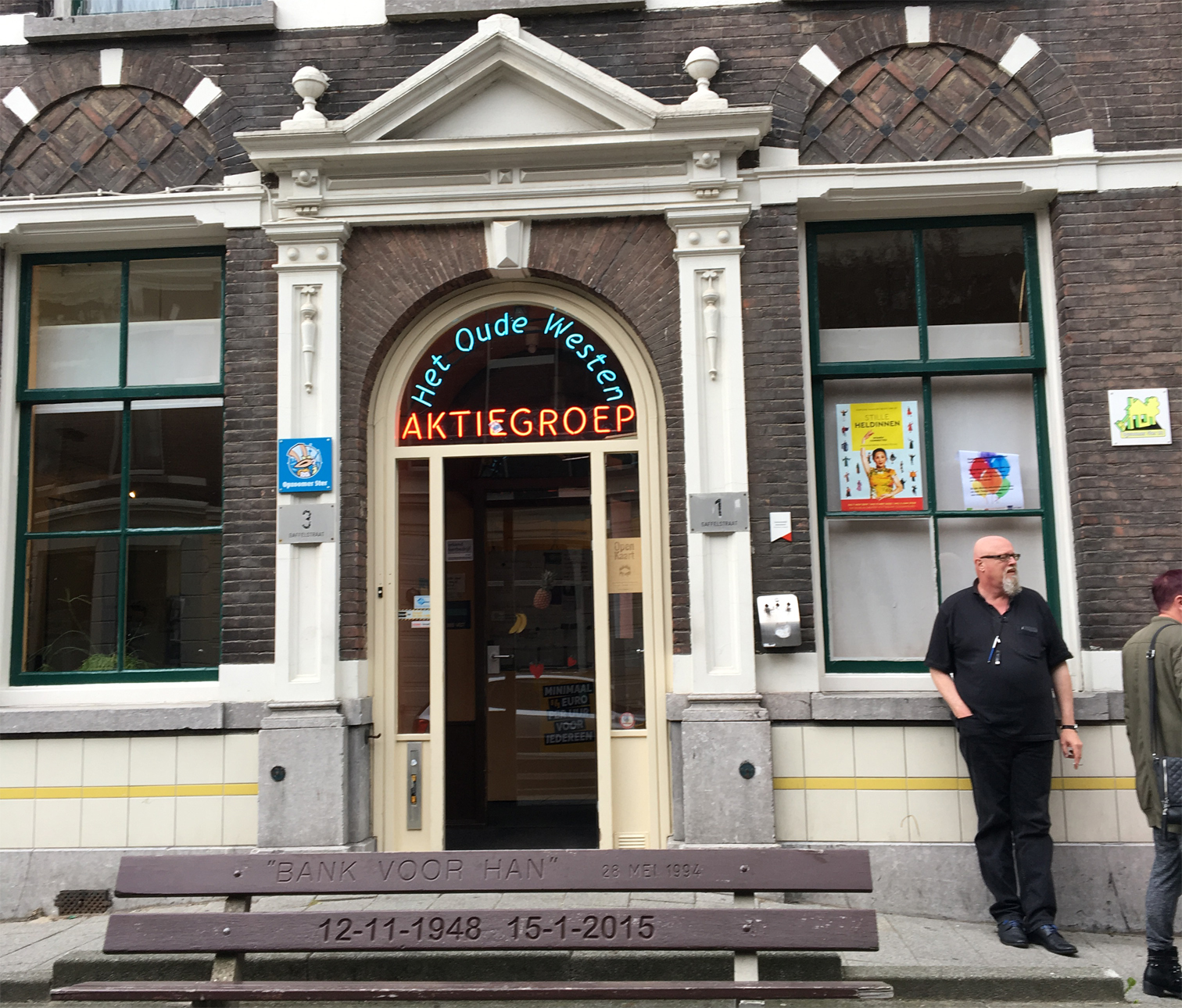 But while the cultural experience of artists of colour continues to remain underappreciated by mainstream society, both Kouame and Saleh observed a growing tendency for shallow appropriation of the street culture aesthetic. As Saleh said, “In the past few years, London has seen working-class culture being aestheticised and co-opted by those who are not from that background. Rich folk are cosplaying being working-class, fetishizing chicken shops and tower blocks. They can take the aesthetic and run with the façade but they don’t have an organic relationship with these spaces.”

Appropriating this street aesthetic is a useful way for mainstream cultural institutions and practitioners to seem relevant and in touch with contemporary culture. But in separating the aesthetic from its context, these institutions will necessarily strip it of much of its depth. In doing so, they also strip the culture of its radical force. It’s only by elevating the places where the aesthetic is actually produced in the first place that this radical vitality can remain intact. This is the essential strength of projects like FOR THE CULTURE.

Zeinab Saleh is an interdisciplinary artist based in London who graduated from the Slade School of Fine Art, UCL. Her current practice is centred on generational immigration, community and the digital age. She has exhibited work at 198 Contemporary, V&A Lates and UCL Art Museum. She was a recipient of the Art Quest’s Peer Forum award in 2018.

Cedric Kouamé is a multimedia artists, record, collector, DJ and radio curator born in Abidjan, Côte d’Ivoire and now living between Brussels and Abidjan. He is currently studying for a Masters degree in Installation and Performances at l’École de recherche graphique in Brussels.